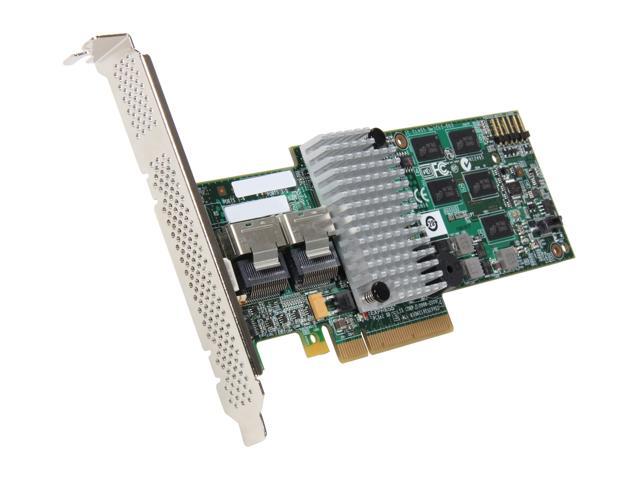 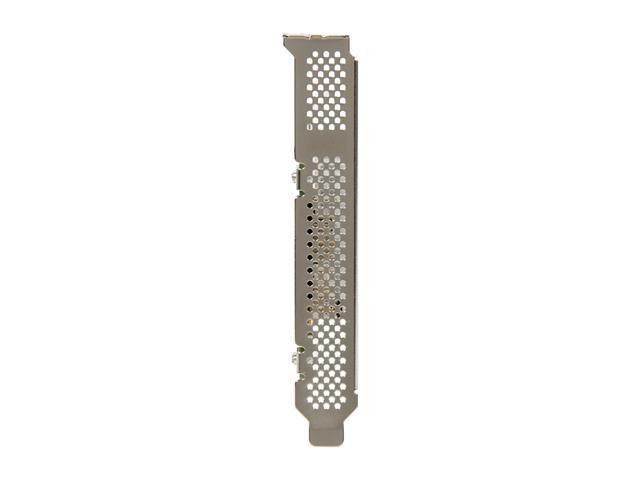 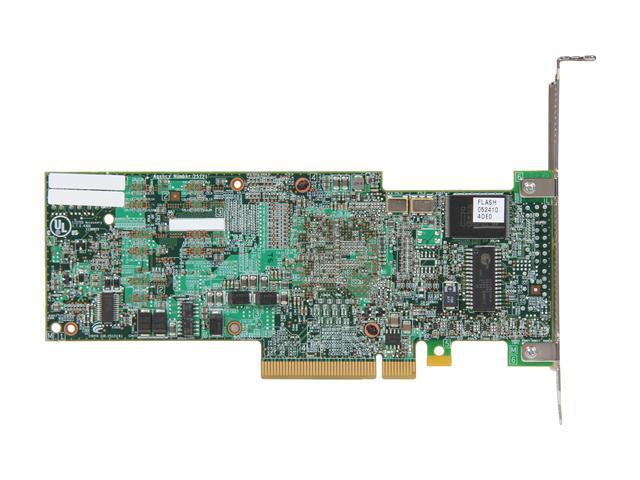 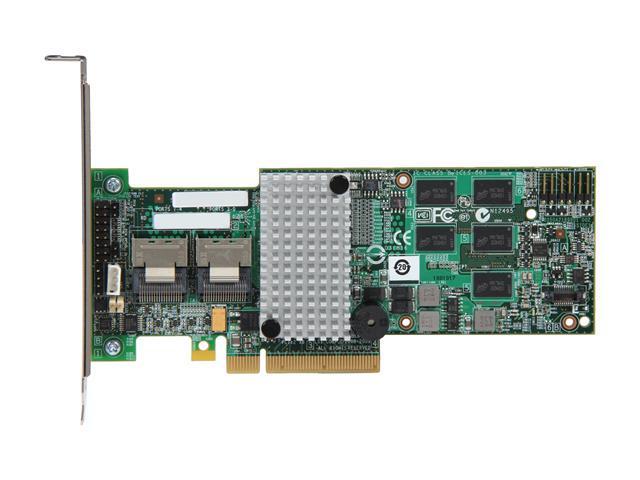 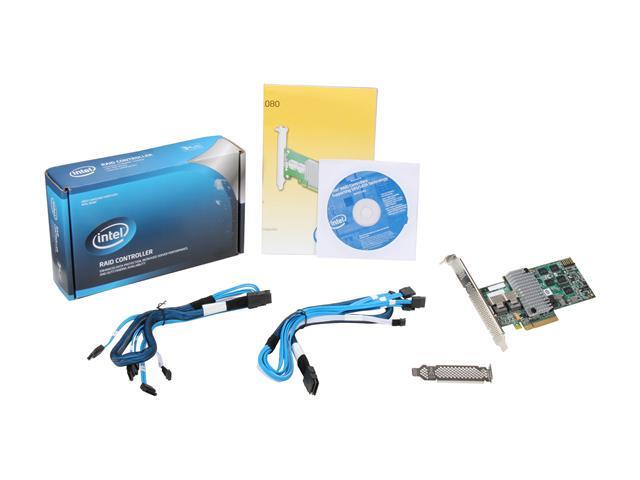 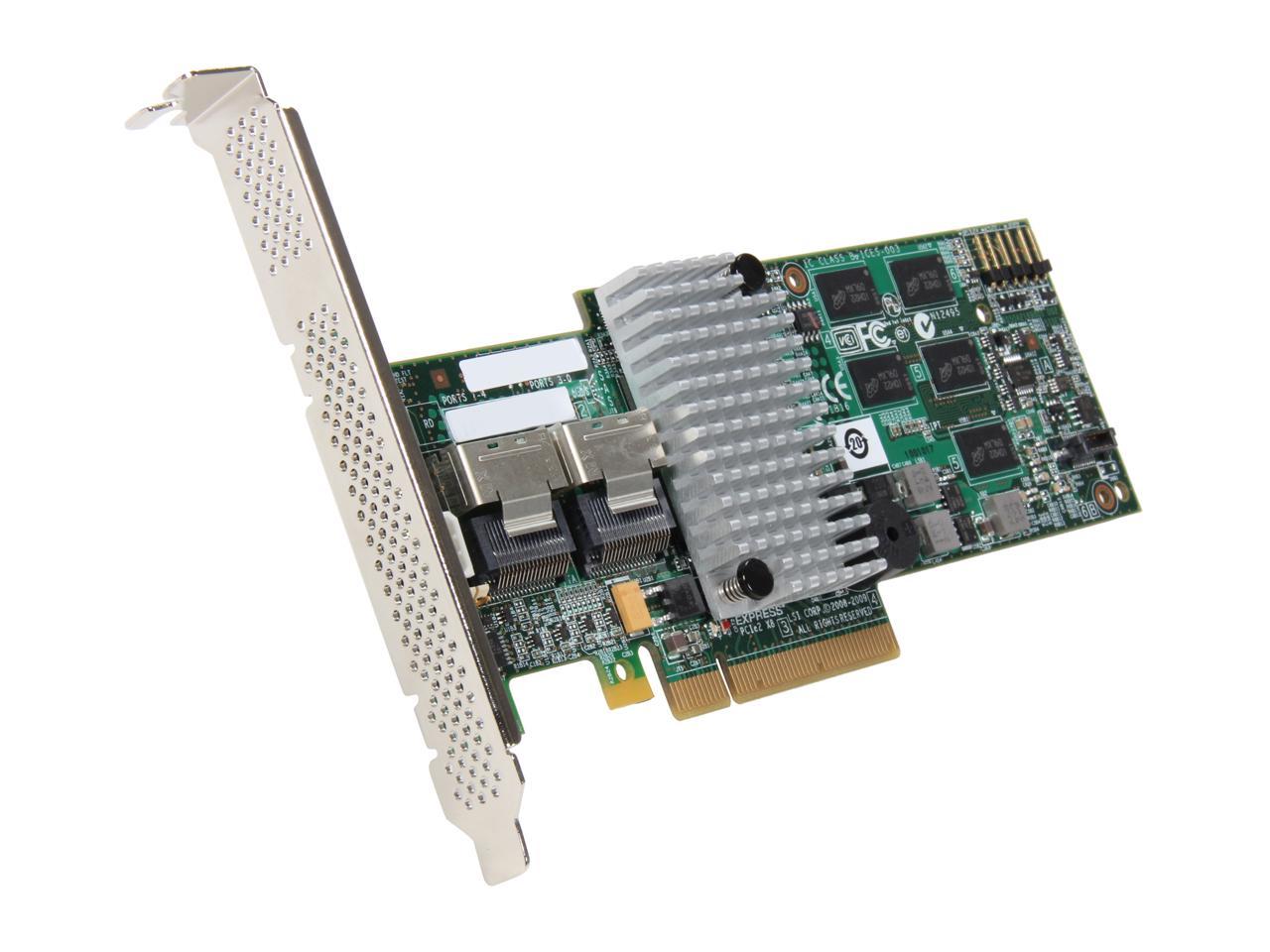 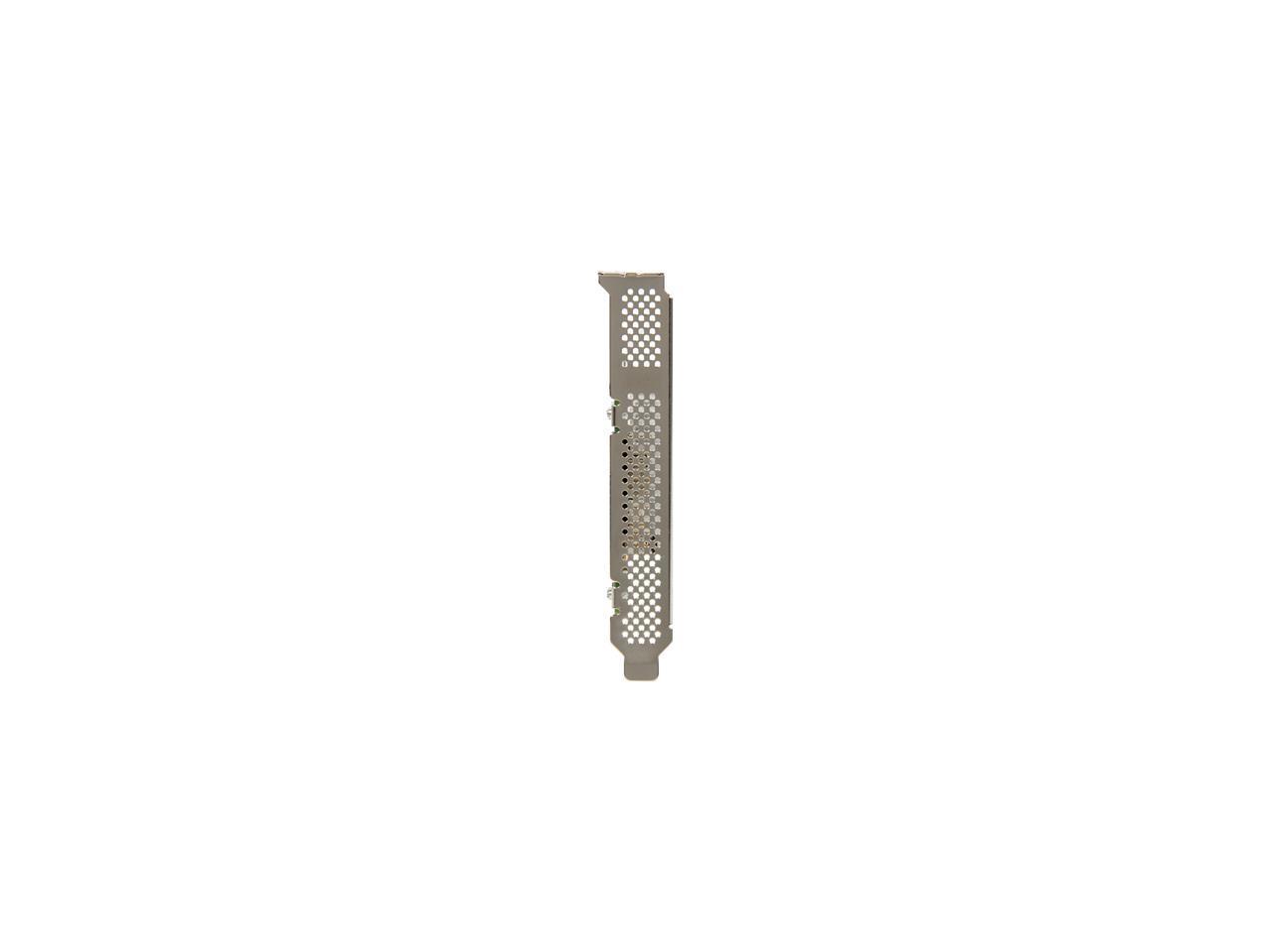 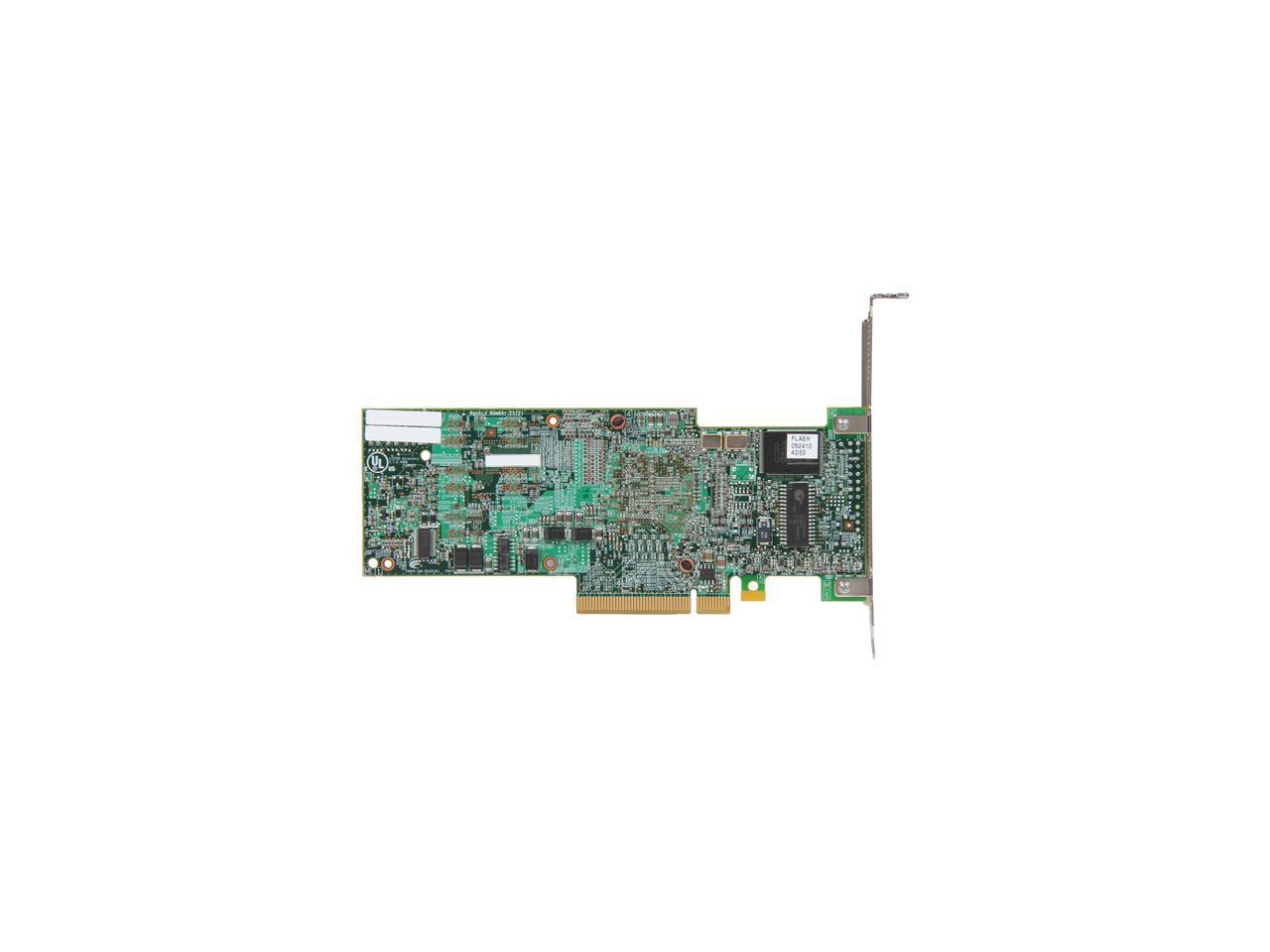 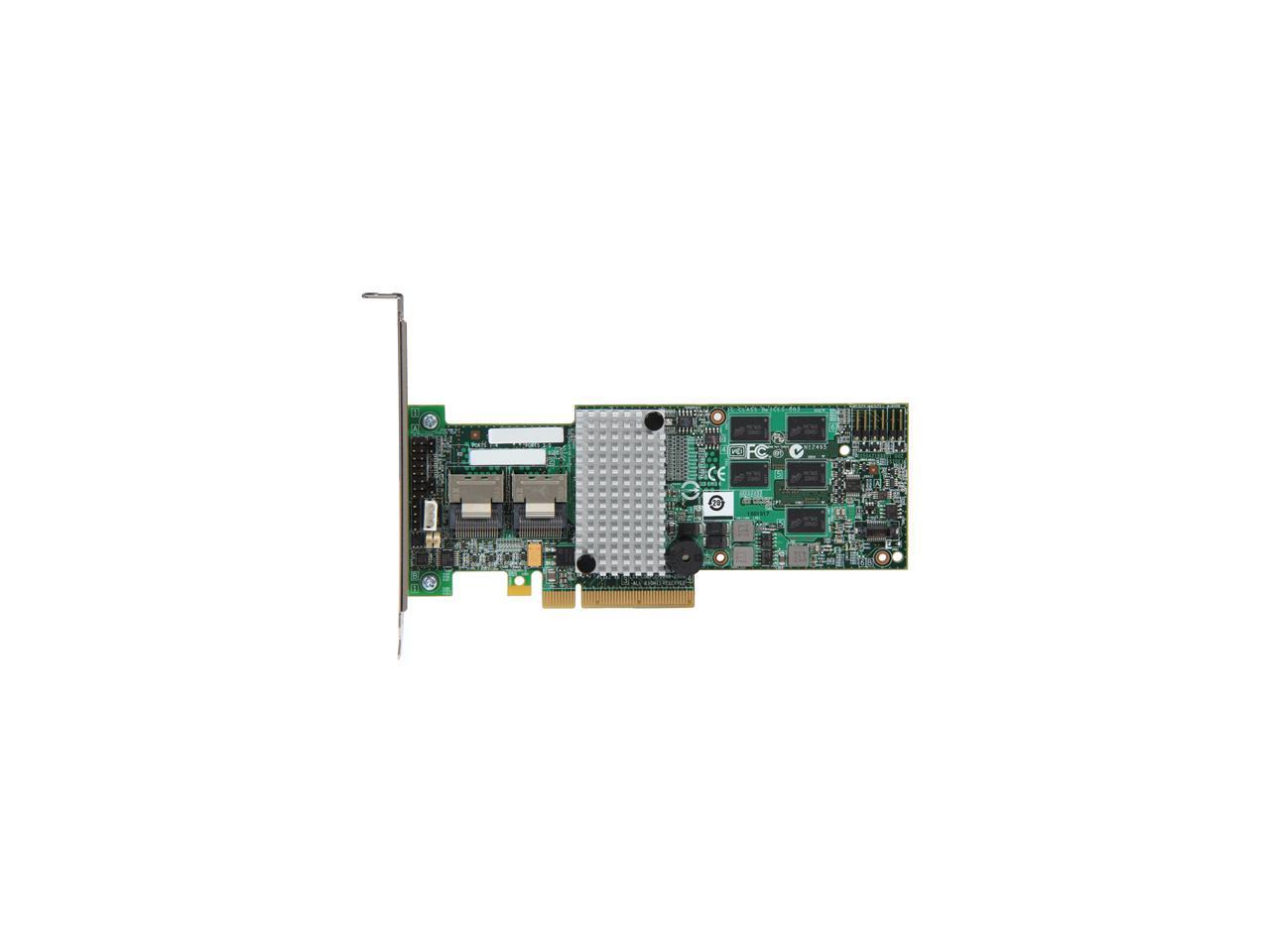 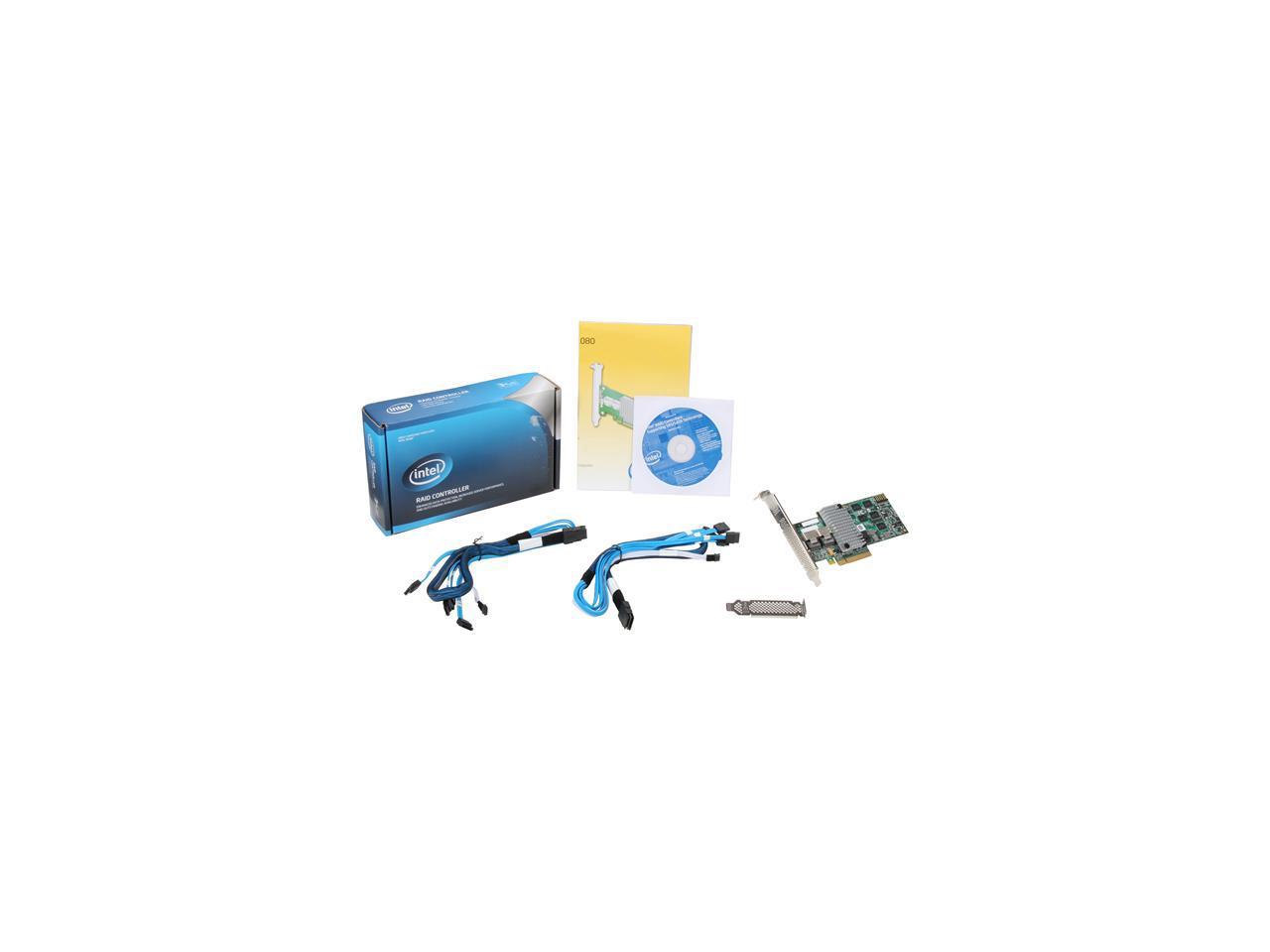 (7) Write a Review
OUT OF STOCK.
Overview
Specs
Reviews
The Intel RAID Controller RS2BL080, with eight internal ports is a powerful SAS 6Gb/s, 3Gb/s, SATA 3Gb/s RAID solution for mainstream use, which offers unprecedented performance with exceptional data protection and design flexibility. This controller delivers outstanding availability with proactive drive monitoring and automatic error correction, along with an optional battery backup that maintains data without the need for an uninterruptible power supply. For even greater protection, the Intel RAID controller allows for optional self-encrypting drive support through the use of an Intel premium feature upgrade.

Learn more about the Intel RS2BL080

Pros: The kitchen sink. Currently running four Samsung 840 Pro SSDs in RAID-0. Unbelievably fast. Sustained read times of 2.0GB/s, sustained write times of 1.8GB/s. A bit of bottlenecking when duplicating files, but still seeing transfer rates of 500MB/s on those operations. (As I've found, this could have a lot to do with actual filesystem implementation, btrfs is twice as fast as ext4 at these operations. Waiting on a Windows install disc in the mail to test NTFS natively.) All of this is without the cache being enabled. Speed, ridiculous speed. I'm planning on building a RAID-6 out of 4 7200RPM WD drives. This is where the cache will really prove to add a bunch of performance gains. Waiting on another modular SATA power cable in the mail from COOLER MASTER, drives are already installed in the case. I'm not entirely sure about the TRIM support with the firmware. The SSDs have idle garbage collection, so that's nice in that they repair themselves without TRIM. In btrfs, I've enabled SSD allocation mode (for spreading out files in the filesystem evenly) as well as the discard option (which should send out TRIMs), but I'm not entirely sure if the commands get to the drives. If commands are, in fact, passed through, that'd be awesome, but I'm not sure on this and Intel hasn't confirmed or denied anything on this chipset, though on other chipsets, TRIM is available. Time will tell, I suppose. I'm happy I bought the battery backup unit, as this will be great with for the cache with the RAID-6 array. The alarm works really well, sounds like a fire or security alarm. Found this out the hard way. Update your BIOS immediately or you won't be able to turn it off, see cons.

Cons: As other reviewers have noted, this thing runs really hot, even under less-intensive arrays like RAID-0 arrays. The heatsink can get really hot and since there's no dedicated fan, you better supply one yourself. It's not so big of a deal, but if you're trying to build an entirely passively cooled machine, this is going to contribute a lot of heat in your chassis. It's not so much of an issue for me because of the design of my case (I have one 120mm fan perpendicular to the card so it keeps things pretty cool). Heatsink is hot to the touch, but not too enough heat wafting off of it to feel on the back of your hand over the card. It doesn't support JBOD, but then again, I don't really need JBOD. In fact, if you need JBOD so badly, DON'T BUY A RAID CARD! Plug them into your motherboard. If you need expansions, I understand, but seriously, you shouldn't be spending $500 on a RAID card for JBOD. RAID and JBOD are two completely separate, unrelated things. Firmware updates are anything but easy. If you're buying this card, it's assumed that you're a system administrator. I am, actually, so it doesn't bother me much, but it might bother you to have to run the CLI application to flash updates. The web interface is there, but your mileage may vary. Firmware updates don't work by default. I had to find the oldest firmware on Intel's site and flash that, reboot, flash the next version, reboot, etc. until I got to the most recent firmware version. You can't update to the latest firmware by default because it informs you that the firmware image is corrupted. This was REALLY frustrating and took a lot of my precious time to sort out. The firmware version on my card (12.7 or something like that) had a nasty bug that wouldn't let me get into the RAID BIOS. It would only let me get in the very first time I was configuring the card. I'd hit CTRL+G, but it'd never boot into the Intel RAID BIOS. Again, really frustrating, but a not-so-straightforward firmware update fixed it. On startup, it takes a VERY long time for the firmware to load. It's definitely over 30 seconds, could be 45. All this happens before you even get to your motherboard's BIOS. For overclocking, this is going to be a big killer as I'm going to be rebooting a lot. The cables are as hideous as they come. If you're a builder/overclocker who wants pretty internals, buy other SAS to SATA cables. They're terrible for routing and come tangled by default :)

Overall Review: All in all, a great card, just terrible support from Intel. There should be more support for firmware updates or at least a hint in the user guide that "If it fails to flash, try an older firmware first and move forward incrementally." There should also be support and development toward making the firmware load in 5 seconds as opposed to 30-45. It's just ridiculous. Intel should also address directly in the documents whether this card or the firmware supports TRIM passthrough or native TRIM support on SSDs.

Pros: Easy Integration. I got this controller up and running in about 15 minutes. Super fast speeds. I previously had a RAID10 array using the same model drives and integrated motherboard RAID getting 300MB/s at best. Once the onboard controller got going for > ~15 seconds, speeds would gradually start dropping to ~200MB/s. In a RAID50 with 8 Seagate enterprise class 1TB drives, I get an average of 566MB/s, 8.2ms average access time. This is using HD Tune. These transfer speeds put my Intel SSD to shame (though SSD access time cannot be beaten).

Cons: Runs HOT. After running 1 or 2 tests on the array, the controller is super hot to the touch. I'm somewhat surprised Intel didn't improve heat dissipation on this card with either active fan/s, or a bigger passive heatsink. I will be adding a fan to this controller in the coming days. I didn't deduct any eggs, because speeds do not seem to be affected by increases in controller temperature, at least not significantly.

Overall Review: Running this controller on an EVGA SR-2 motherboard with dual Xeon 5670's, 48GB RAM, running Server 2008 R2. Primary use for this setup is application testing in Hyper-V VM's. Running 10 VM's at once using the SR-2's onboard RAID controller, with RAID10 was almost slow enough to not even work (super frustrating). With this card, I can start all of the 10 mentioned VM's at the same time, and they are all up within 1 minute. I'll be adding even more VM's in the coming weeks. I may also mention that after I installed this card, I had to switch the onboard RAID controller to AHCI for any drives attached to that controller to show up. Not a big deal as I will not be using that controller for RAID anymore, but I figured it would be worth mentioning. The included cables are 29" long from end to end.

Pros: I am using an RS2BL080 in an Intel S1200BTS-based system w/ 6 HDD and 2 SSD on separate arrays. Easy set up, configuration and the performance is excellent.

Cons: The auto config wizard automatically selected RAID 6 for the 6 HDD array. Wanted RAID 5 so had to go through manual set up.

Pros: Installation went smoothly. Intel quality is apparent. No fan on the heat sink to add noise to the box.

Cons: Performance wasn't as good as we had hoped. We set this up as a RAID 50 array using 8 Samsung F4 2 TB drives. HD Tune Pro rates the read speed at about 300mbps. Reading some other reviews for Areca boards the Intel board may not be as good a performer.

Overall Review: Perhaps Areca has algorithims designed for testing, perhaps there's a benefit with going for Intel quality and stability. That's what ultimately sweayed me to buy this board. Next time, I'll try an Areca board.

Pros: Handled just about every disk I've ever attached to it. Ran a 5 x 1.5TB RAID5 array, then added a 6th 1.5TB disk and converted to RAID6 with no hassle whatsoever. Currently have 4 x 4TB RAID5 with 5th 4TB as a global hot spare. Works with any OS. Compact. Fast. Comes with low-profile back plate. Included cables are durable and perfect for even fairly large/tall cases.

Cons: When a disk fails, or the config changes, or it decides to tell you about something, you know it. The internal beeper is enough to wake the dead, but then you want to know if your precious data is at risk. It doesn't seem to handle optical drives and I have some issues with it not recognising SSDs at start up.

Overall Review: Having used a multitude of other, lesser "RAID5" cards, I wish I had saved my time, money and heartache and just spent the money on this one in the first place. These cards are pricey, there's no denying it, but what you get is solid, fast, reliable and simply flawless and fantastic. I cannot recommend this card enough.

Pros: Fast and easy to setup

Overall Review: Even though the page here at NewEgg says that these carry a one year warranty, it's 3 years in reality. Updating the firmware is kind of a pain, the updates are not cumulative so you must do them one after another. We have 5 of these and one of them has developed a few issues after 1 year and 3 months. Intel has been extremely helpful in sorting out the problems and gave no grief in respects to replacing the card. As always, no matter how much you spend on hardware, you're only as safe as your backups.

Cons: Comes with no battary backup mode (add another $192 for this.) Runs crazy hot. I added a heatsink fan to mine, but at the expense of losing an expansion slot. Intels version of the management software is ugly. Use the LSI version. Ugrading the firmware needs to be done in release order. I was unable to jump directly to the latest one. It fails citing corrupt image, but it is really that I was trying to go from release version of BIOS to latest. Upgrading firmware sequentially got around this.

Overall Review: Lower the price and include the battery backup module.