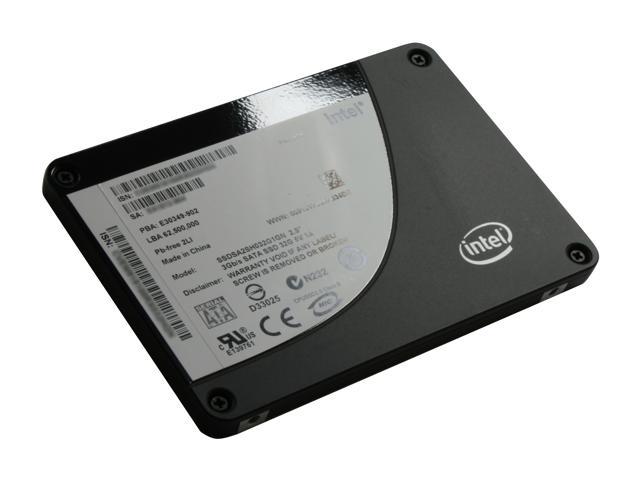 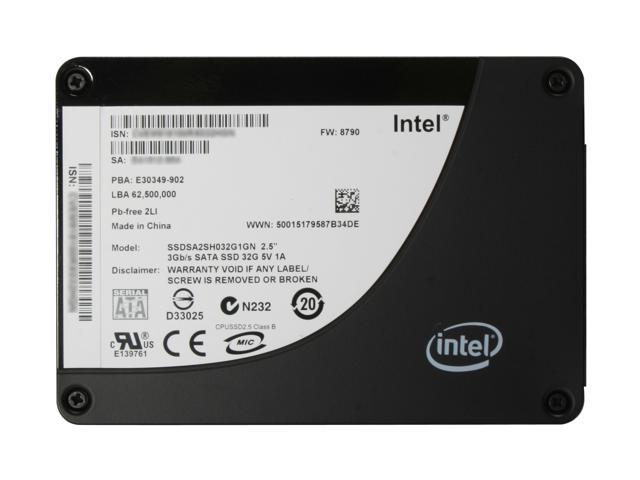 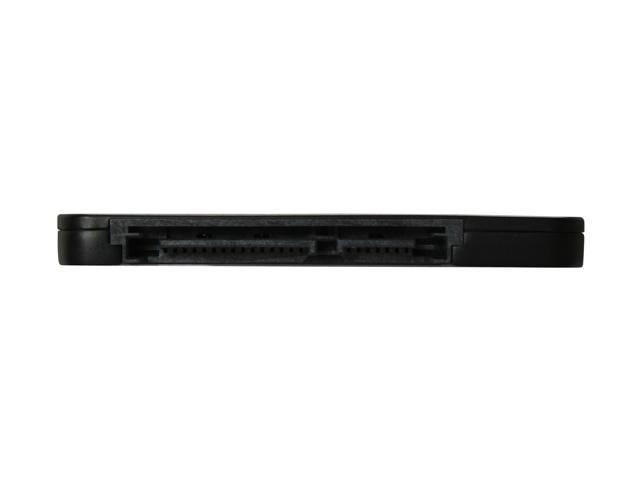 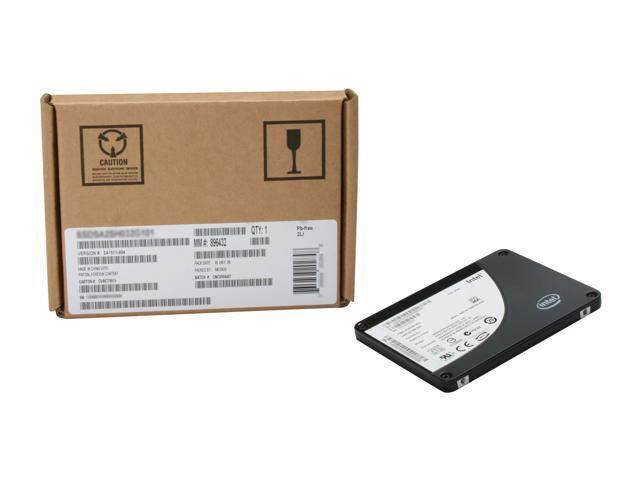 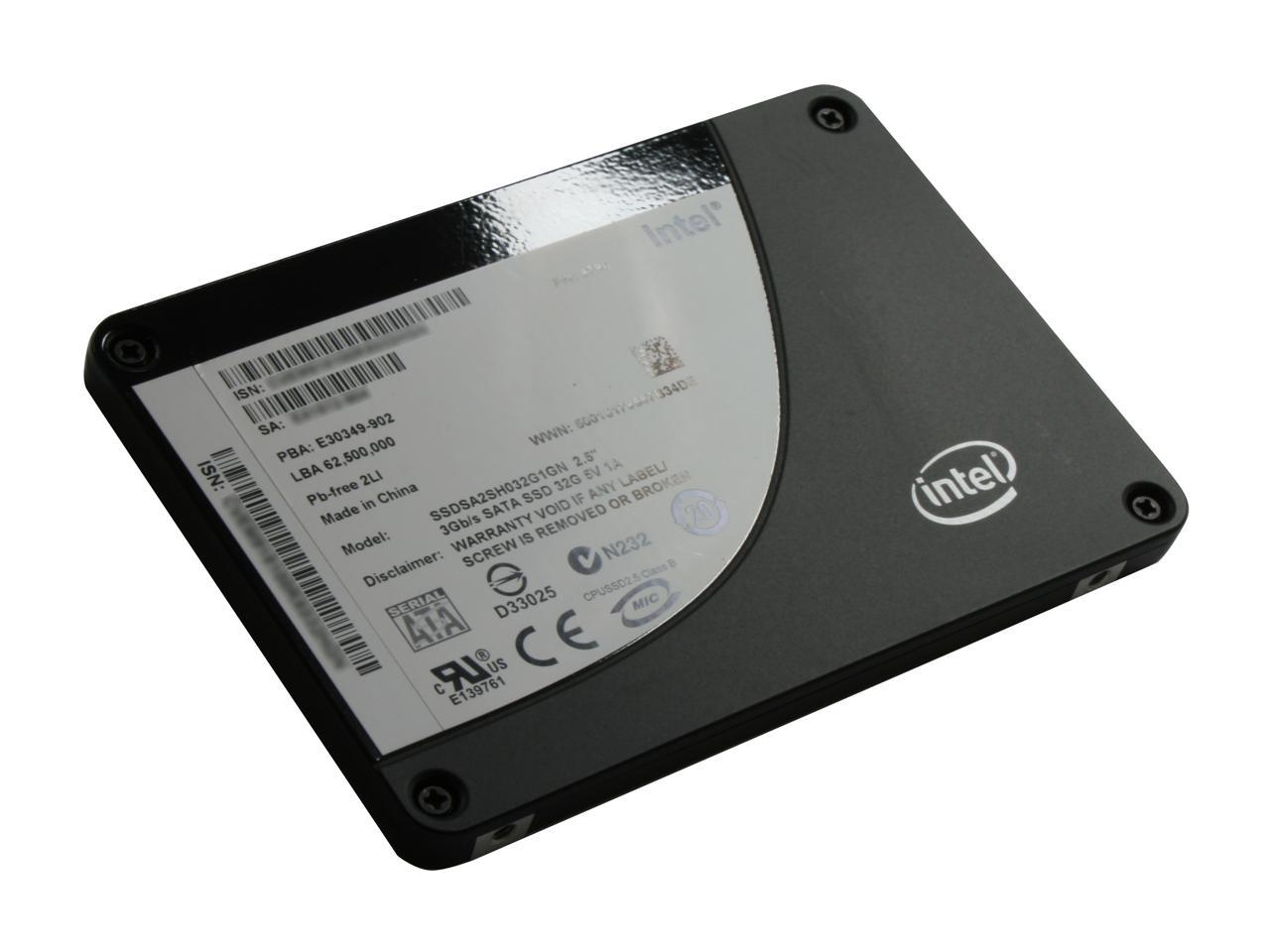 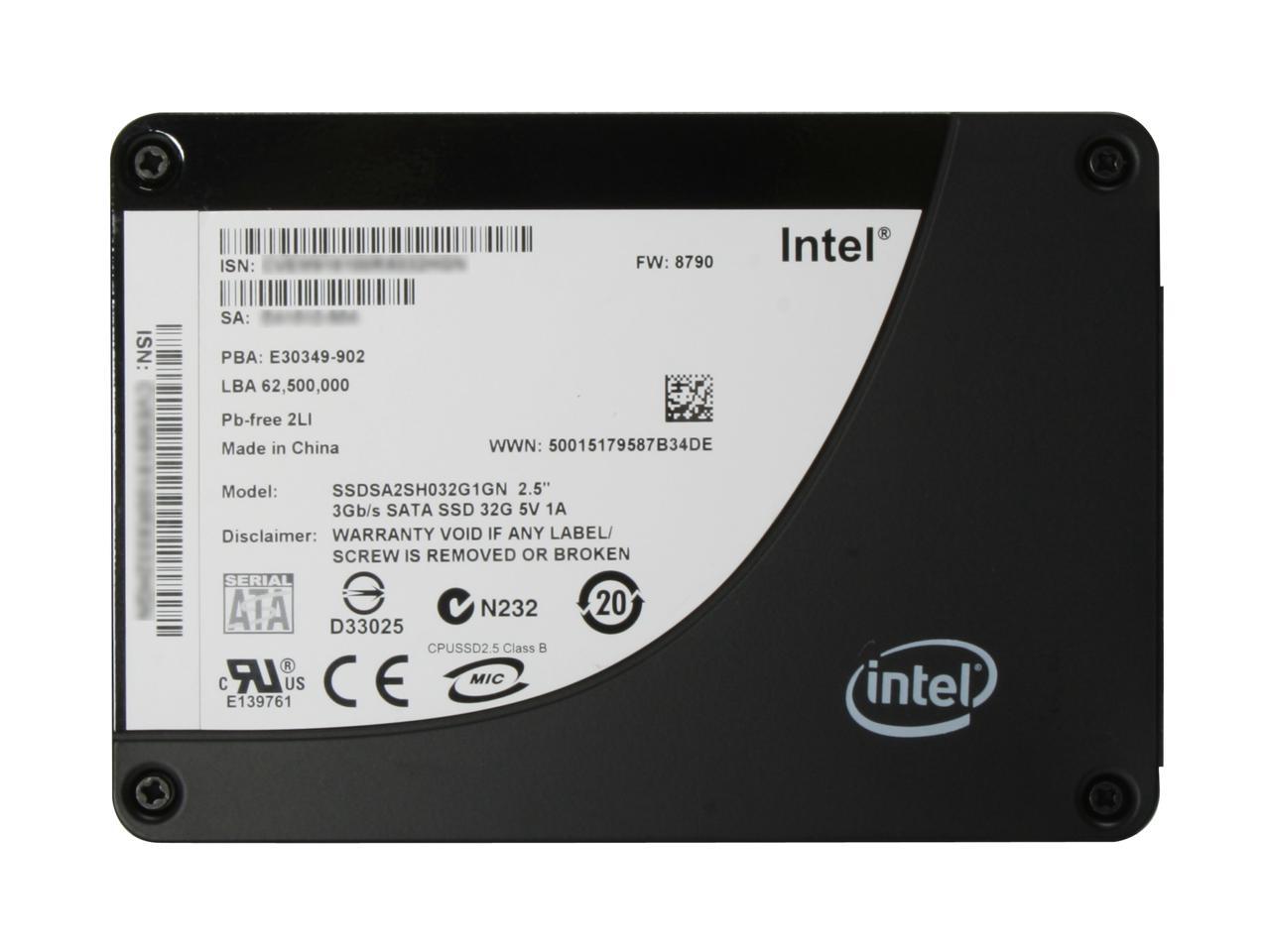 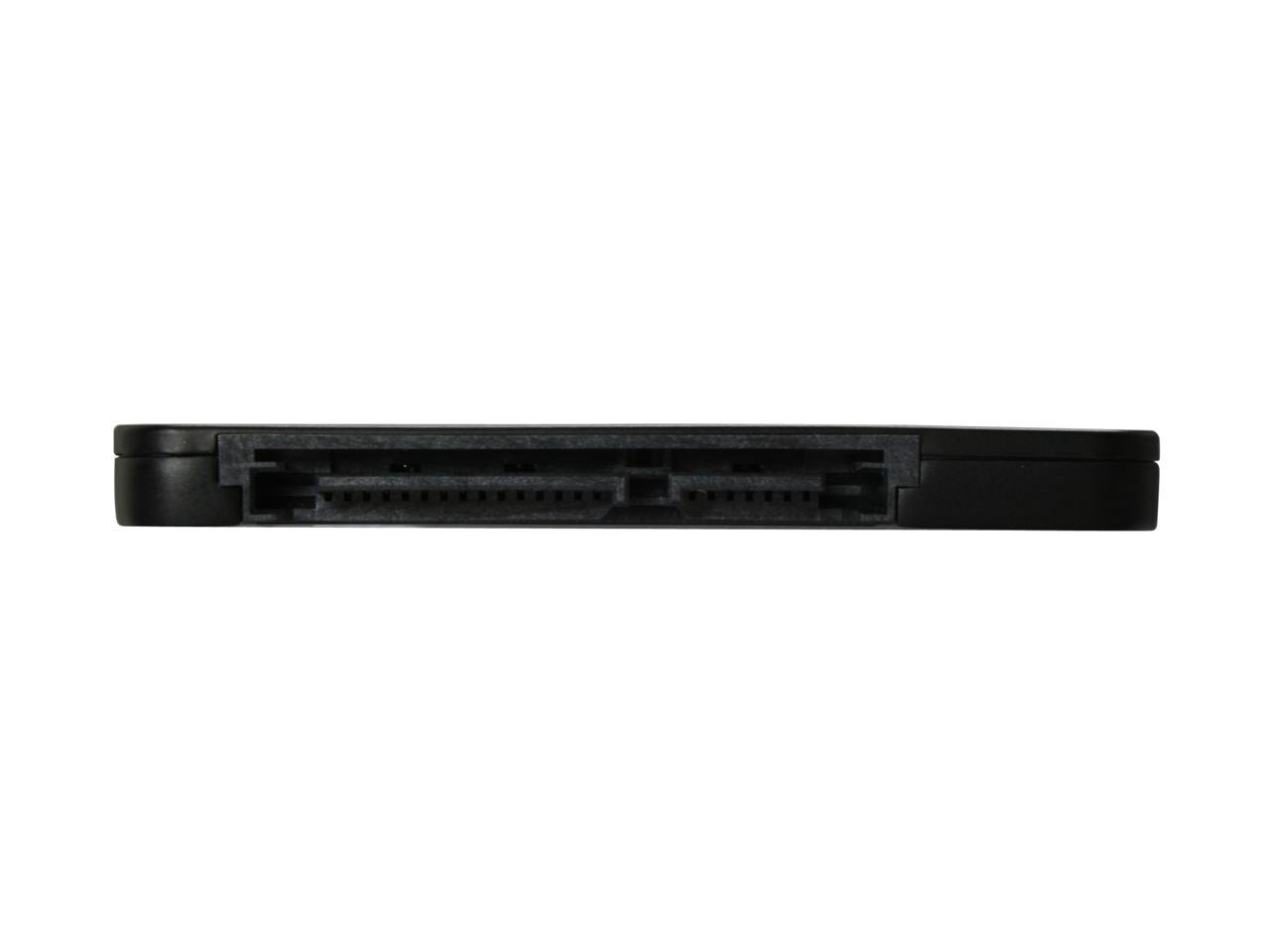 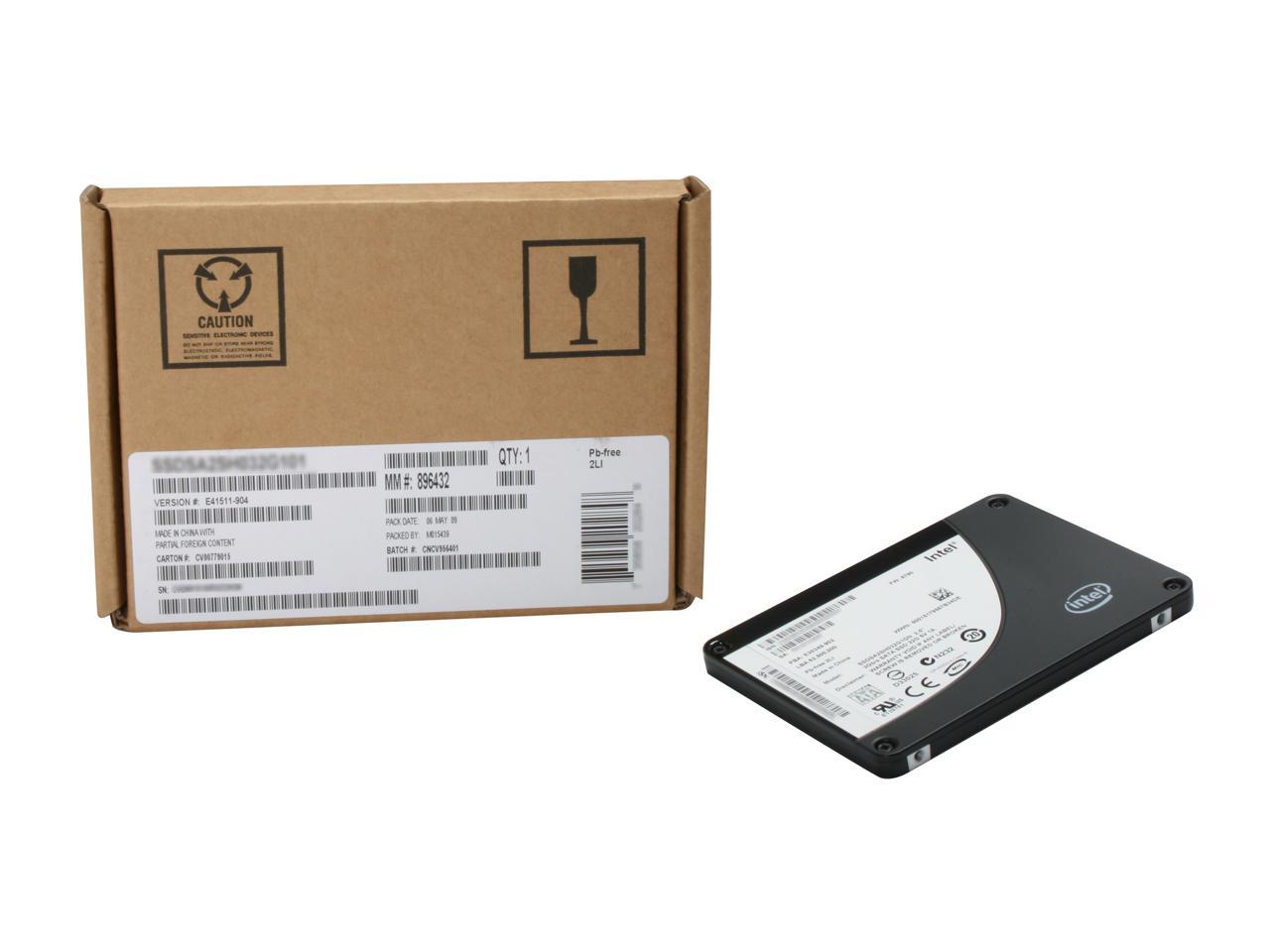 (59) Write a Review
See more "slc ssd"
In stock.
Ships from United States.
Most customers receive within 4-8 days.
Overview
Specs
Reviews
Bring an extra level of performance and reliability to your PC with Intel's X-25M Solid State Drive. Unlike regular hard disks, the Intel solid-state drives have no moving parts, giving you a cool, rugged storage alternative. The lower power needs of this 32GB SSD translate to lighter notebooks with a longer battery life.
These innovative drives deliver outstanding performance with the latest-generation SATA interface and architecture with 10 parallel NAND flash channels and Native Command Queuing for up to 32 concurrent operations. Far faster than traditional drives with impressive reliability, these Intel drive perform better and are likely to last longer!
Keep ahead of your storage needs with Intel!

Learn more about the Intel SSDSA2SH032G1

Pros: Fastest, lowest latency device I have used for primary storage besides maybe a ramdisk. When I got the SSD, it showed 54 hours of usage and 66 power cycles, I assume this is testing at the factory, in any case, this is what the smart stats look like and some basic dd speed tests, as shown in the techreport review, write speed is quite fast, 227MiB/s. The machine used to take about 60-70 seconds to boot, it now takes about 5-6 seconds. When opening browsers etc, I no longer hear my (previously) 750 gig disk grinding away loading all the libraries, everything is instantaneous. I am happy I waited for the X25-E SSD as it has much better write performance (~227MiB/s vs. 70MiB/s with the X25-M) and its also SLC; it should last longer than a traditional MLC SSD. Overall, a great product.

Cons: Price, but worth every penny. # hddtemp /dev/sda WARNING: Drive /dev/sda doesn't seem to have a temperature sensor. WARNING: This doesn't mean it hasn't got one. WARNING: If you are sure it has one, please contact me (hddtemp@guzu.net). WARNING: See --help, --debug and --drivebase options. /dev/sda: SSDSA2SH032G1GN INTEL: no sensor Disk is 32 gigabytes, or around ~30GB formatted.

Cons: None so far and don't expect to find any. Ideally, price should be lower, but this is one of a few out there with this type of performance.

Overall Review: If you are looking for a solid drive and price isn't a major factor, this is a good drive.

Pros: The drive is everything that they claim it is. It performs, and performs heavily. The SLC tech it uses is noted as being extremely reliable, but more to the point when it's in a system, it impacts application start times, game level loads, just about everything. This has been an upgrade that has greatly improved the responsiveness of my high-end desktop machine.

Cons: There are conditions to using drives such as these with Windows XP, and they are generally considered to work better with Windows Vista or Win7. You may not like Vista, but Win7 is pretty sweet, so this may not be such a big concern.

Overall Review: An IMPORTANT WORD OF WARNING: This drive pushes performance levels that exceed what most standard drives are even capable of, and many systems can't hit the maximum this drive offers. I STRONGLY recommend that those with notebooks look to the Intel MLC-based drives, which feature much higher capacity but roughly half the write speeds. I originally bought two of these to RAID into a Dell XPS M1730, only to find that the storage controller in the system could do no more than 150MB/sec absolutely no matter what - one drive, two drives in RAID, anything and everything stopped at exactly 150MB/sec. Moving them to a desktop system with basic integrated RAID only allowed them to achieve 250MB/sec together and slightly over 200MB/s individually - it wasn't until until they were moved into decent PCI Express 4x and higher RAID cards that they started to flex their power in a RAID array, reaching over 400MB/sec in the same benchmark.

Pros: What these people are saying is true. I'm not going to spew out benchmarks because I'd just be repeating what everyone else has said. I will say only this: I thought Vista was a poor operating system before buying this hard drive. Once I installed it, my applications, and my single project files on this, I was baffled! Vista turns into an optimized, totally enjoyable experience on this thing. This is the single most impressive performance upgrade I've purchased in my life--EVER--regardless of performance relative to the time period. Load times are insignificant and often seem to be non-existent. Honestly, this is the first time in my life that I have virtually no performance issues (besides super high-end video). Windows boots, sleeps, shuts down lightning fast. Even other slower hard drives connected to this machine seem to access faster, which is odd. iTunes, a program notorious for being slow on Windows, opens up almost instantaneously. I LOVE THIS DRIVE.

Cons: Only two problems that I'm reluctant to admit: 1. It's small. I have to copy files to a bigger hard drive a lot, but I've got raptor I scratch with so I don't care. It's about as annoying as cleaning a desktop. Boo hoo. 2. Price. $400 is serious cash for a 32 GB HD... I felt a little silly buying this, but once I got 64 bit vista going I had absolutely no regrets. I'm not kidding. The performance difference between this and a 7200 RPM drive is absurd. I don't know how not to sound like I'm exaggerating. It just totally changes your PC experience. I get on my computer and everything is waiting for me. I'm still stunned at times. I don't deal with the same frustrating things as before. I get so much more done. Productivity is nuts. As fast as you can operate (short of rendering video and exporting extremely large files) is how fast this thing operates.

Overall Review: Stunning. The next generation. The new wave. Worth every cent. Makes me happy every day. When prices go down in the coming years, this sort of technology is going to drive productivity up in unheard ways across all sorts of markets. If you want to future now, get this drive. I'm talking even for practical use. You haven't had a truly enjoyable PC experience until you've flown on this thing. Just make sure your motherboard, ram, and CPU are all pretty new. Otherwise you may not see the same gains I did. BUT --- if you're debating on where to shave off dollars when building a new PC, spend the extra cash on this and not a better video card/brand new CPU/insane RAM. This will show you gains before those will. No kidding.

Pros: Have tried a couple SSD's now, this is by far the best one on the consumer market.

Cons: a bit pricey, but well worth it.

Overall Review: The first SSD is hard to justify the cost of, but once you see the difference in how they run, they become something you can't live without. They take a bit more to set up fully, since you will want to conserve as much space as possible, and remapping/removing items becomes a bit tedious.

Pros: Extremely fast. Top shelf. Actual read and write speeds are as advertised. This drive also holds its value, the retail price has only decreased 9% since I purchased it 8 months ago. Boot time for Windows Server 2003 64-bit is roughly 17 seconds.

Cons: Small, and expensive. I use this drive primarily for my operating system only.

Overall Review: This drive needs a 2.5" to 3.5" converter for usage in a desktop environment. Don't waste this drive in a laptop, go with more storage for a similar price with the X25-M instead.

Cons: Space available, but that was known in buying the drive, that you can't put much on it other then the OS and a couple apps. Also the drive is tiny and I have to just lay it on another hard drive, but runs cool, does not generate much heat at all.

Overall Review: 1. I don't know what it's like to have a Velociraptor or a SCSI 15,000RPM Hard Drive, so in comparison to these, I can't say for certain how it measures up. 2. The cost IS ridiculous, but in terms of a cost-benefit-analysis, there isn't any question in my mind...of course I would have waited longer if I could to see the price come down some but I got weak...lol. 3. It is small...the pics you've seen online and the YouTube videos do NOT prepare you for how small it is. It's slightly bigger than my Debit card...yes, really it is that small; you don't need an ICY Dock...I just Velcro(ed) mine to my DVD no problem.