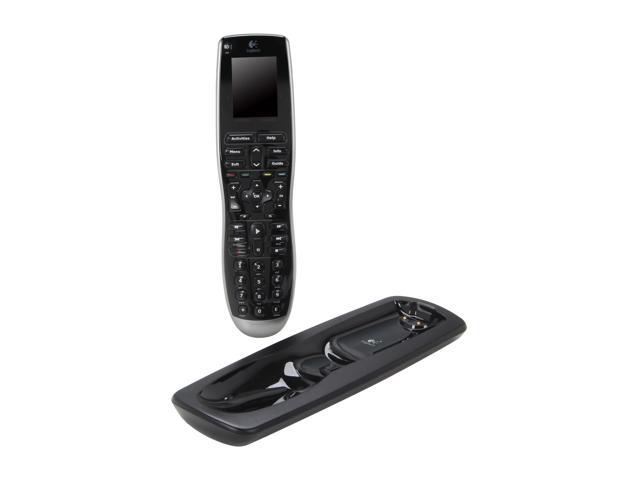 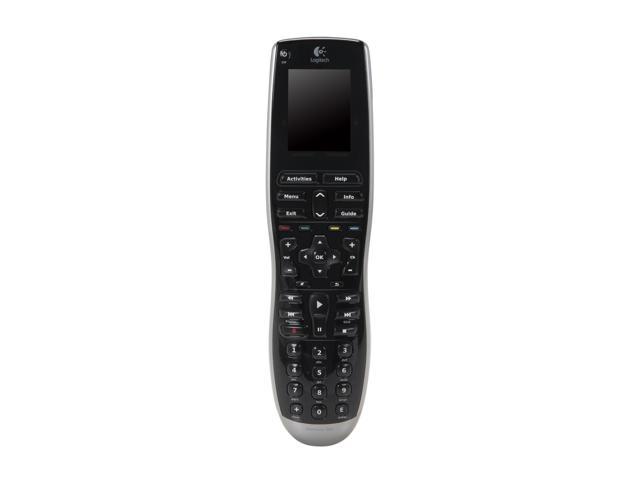 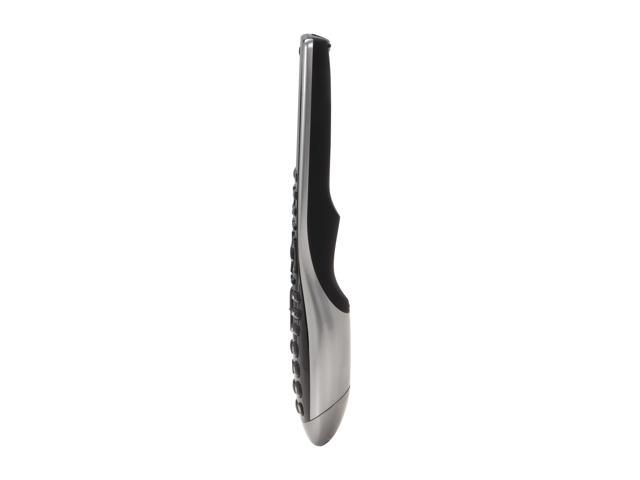 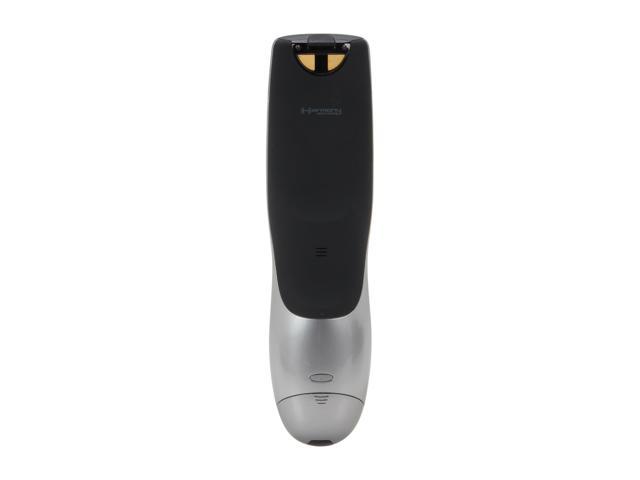 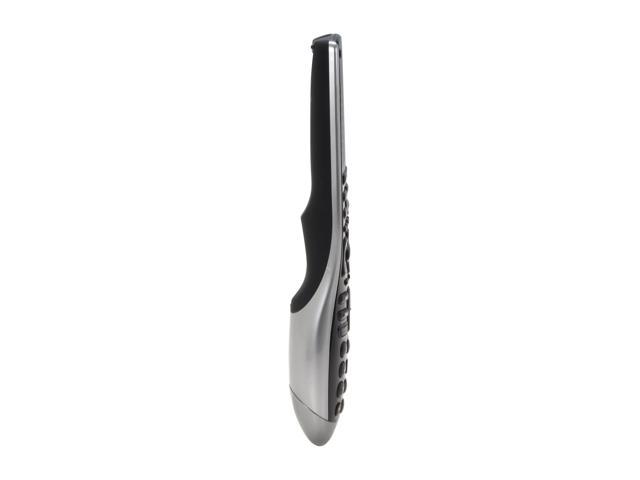 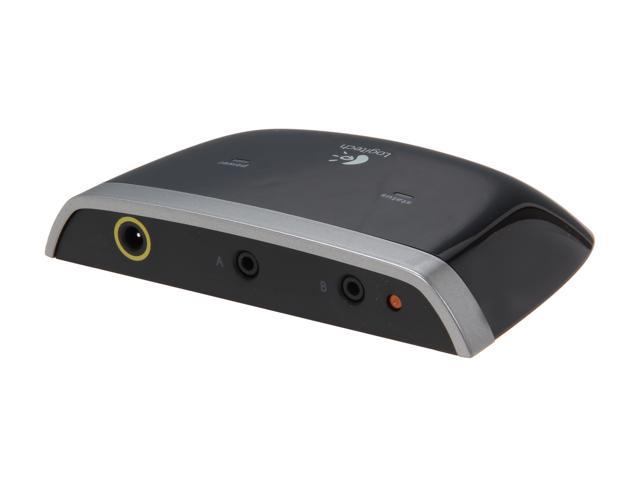 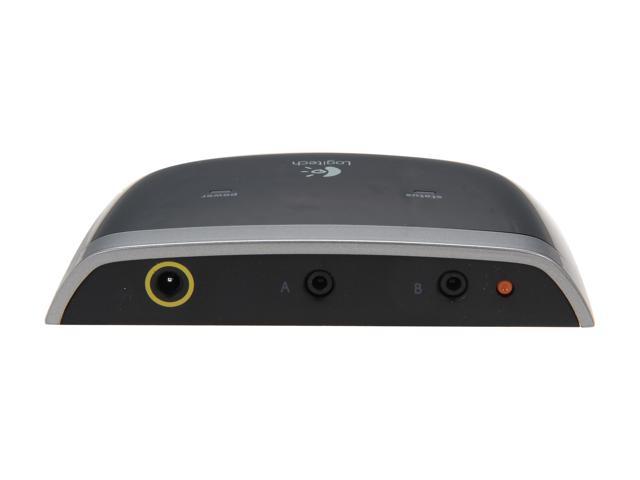 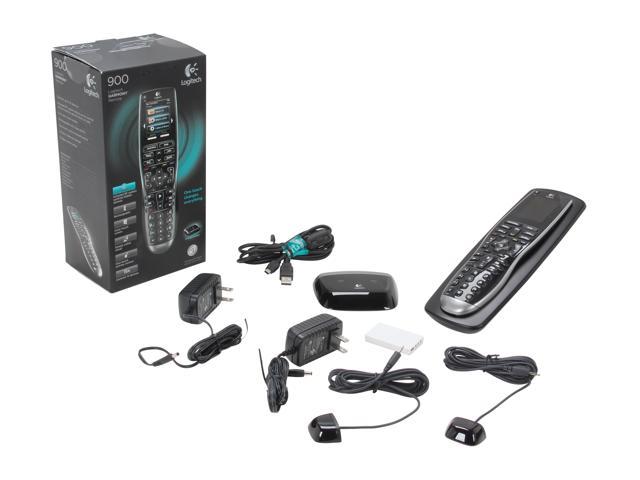 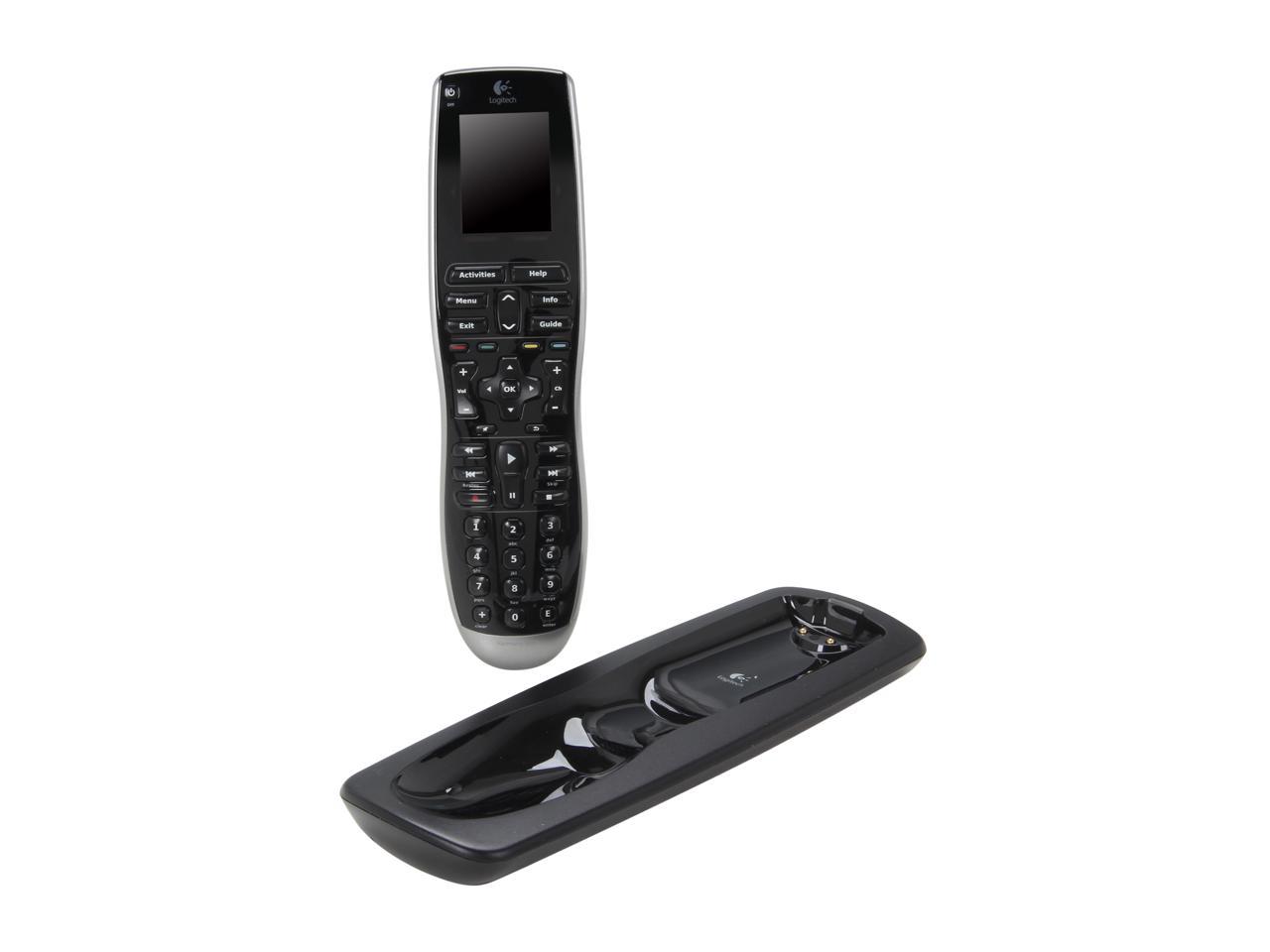 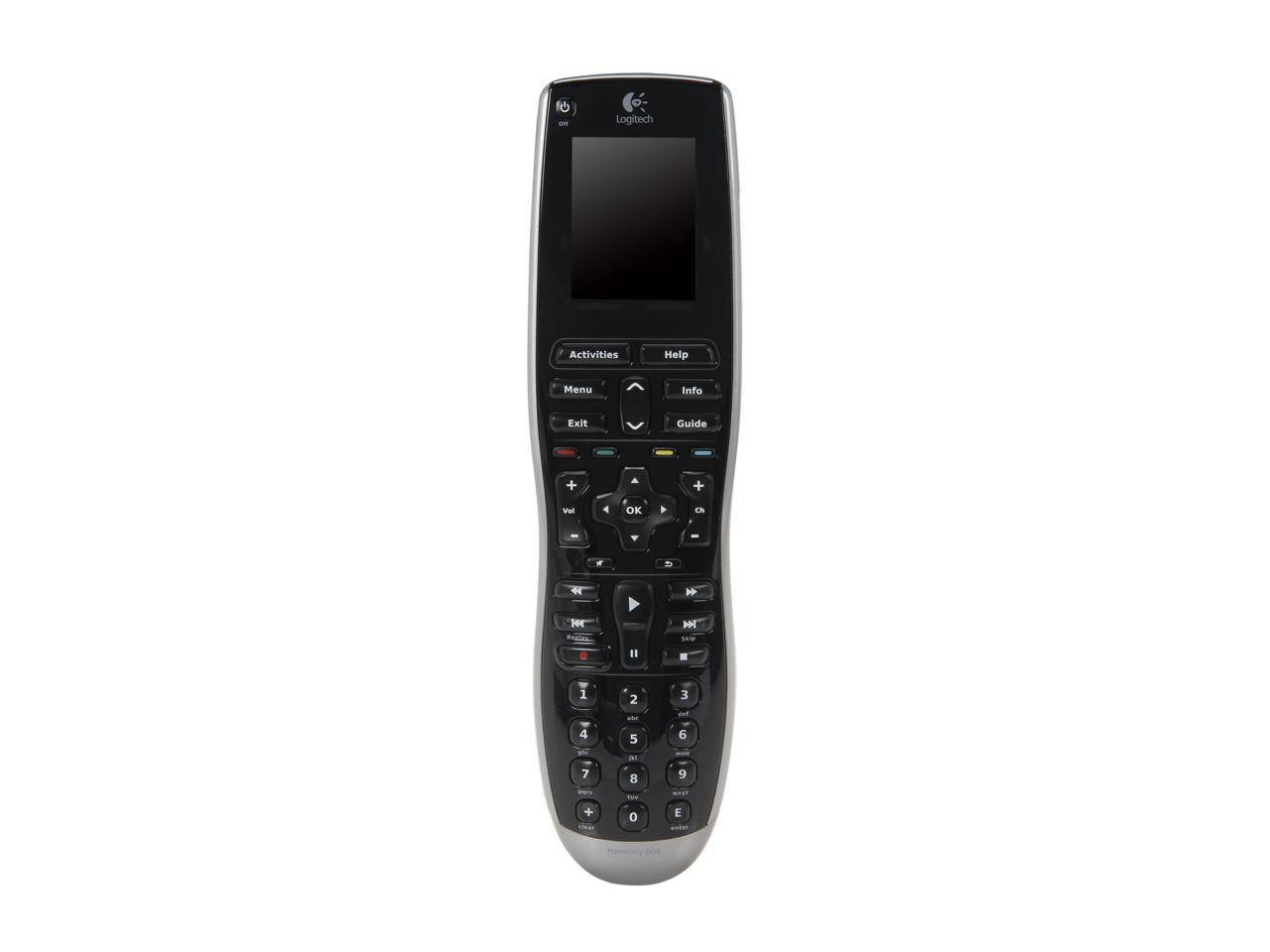 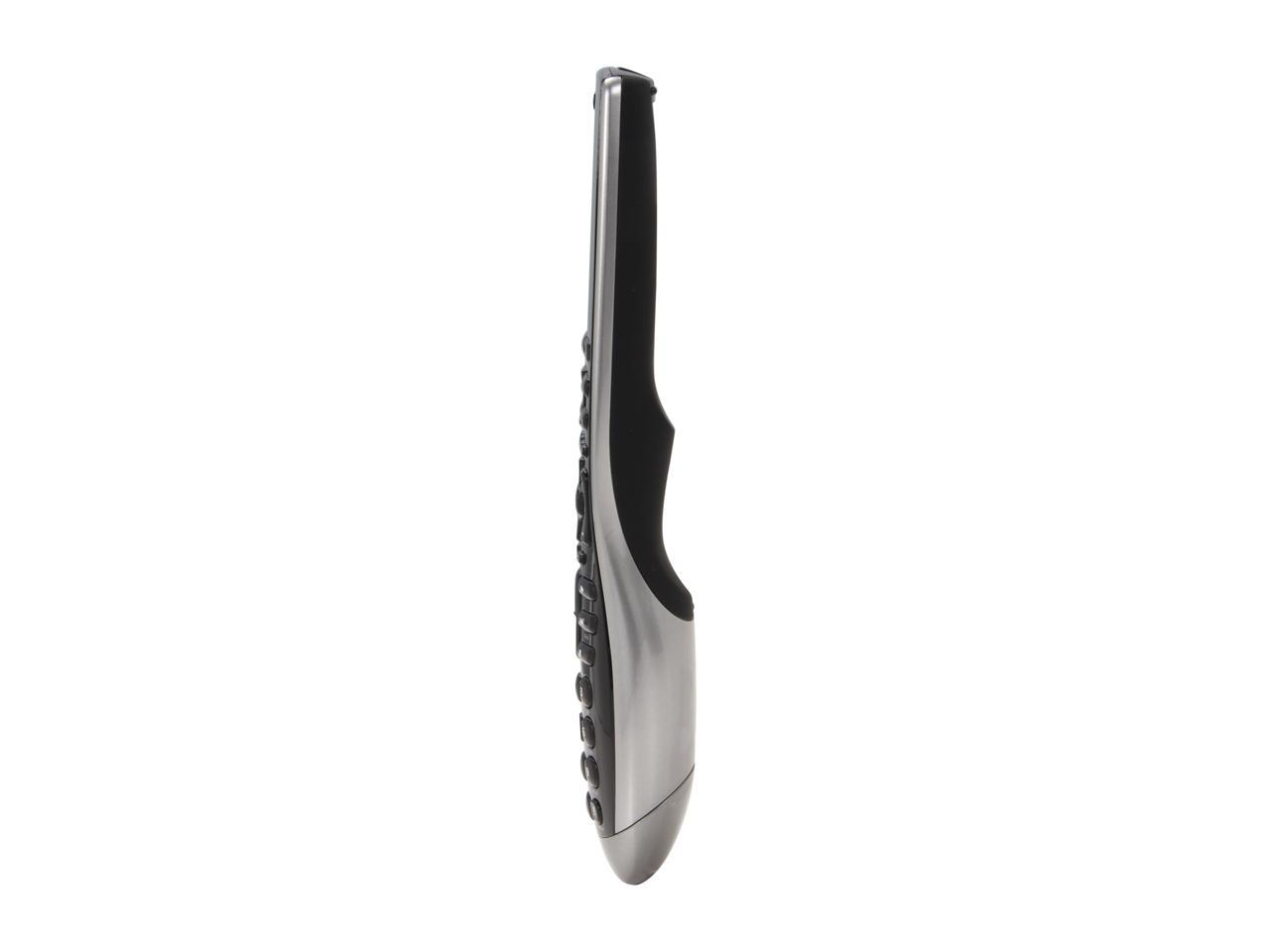 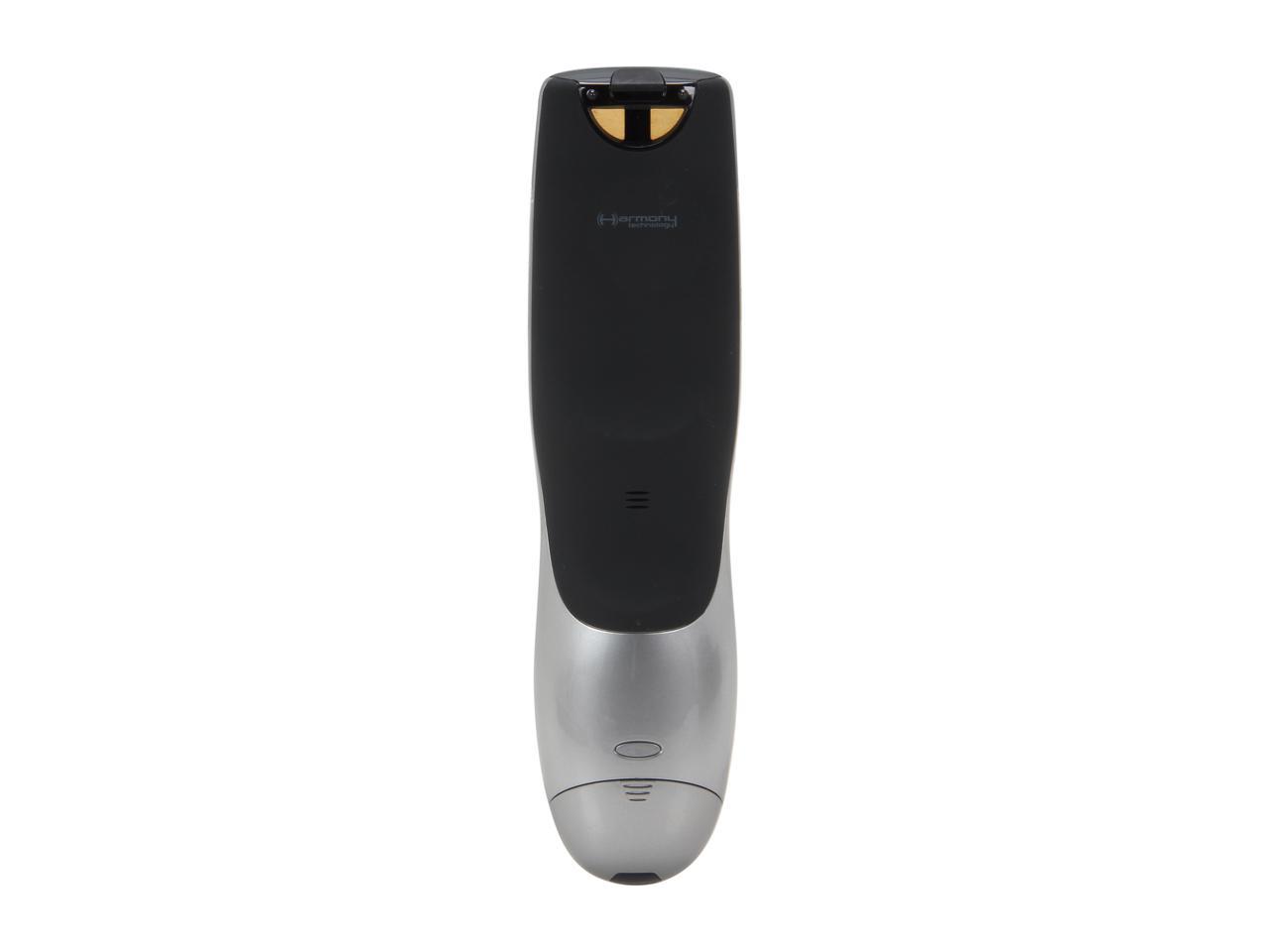 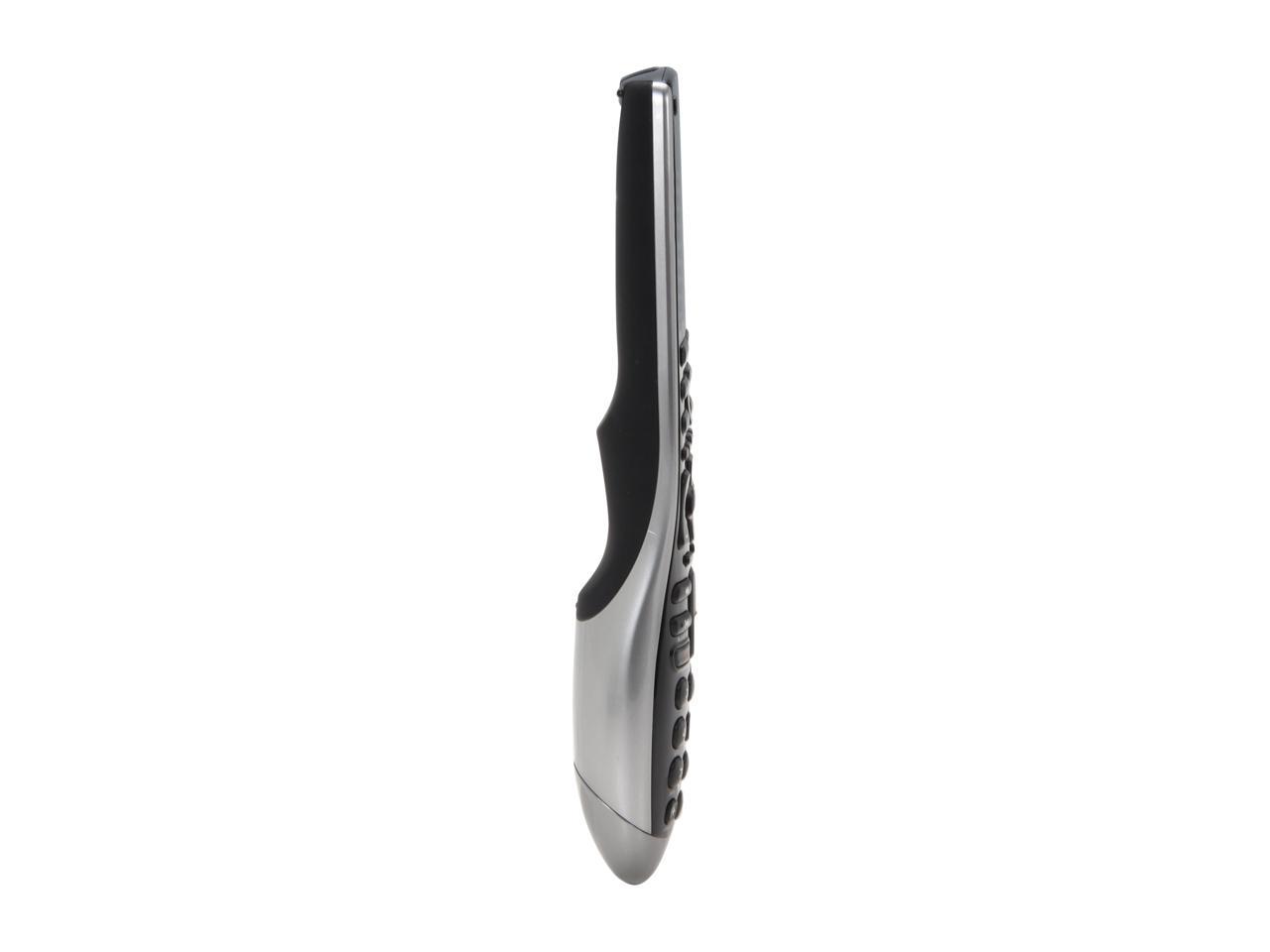 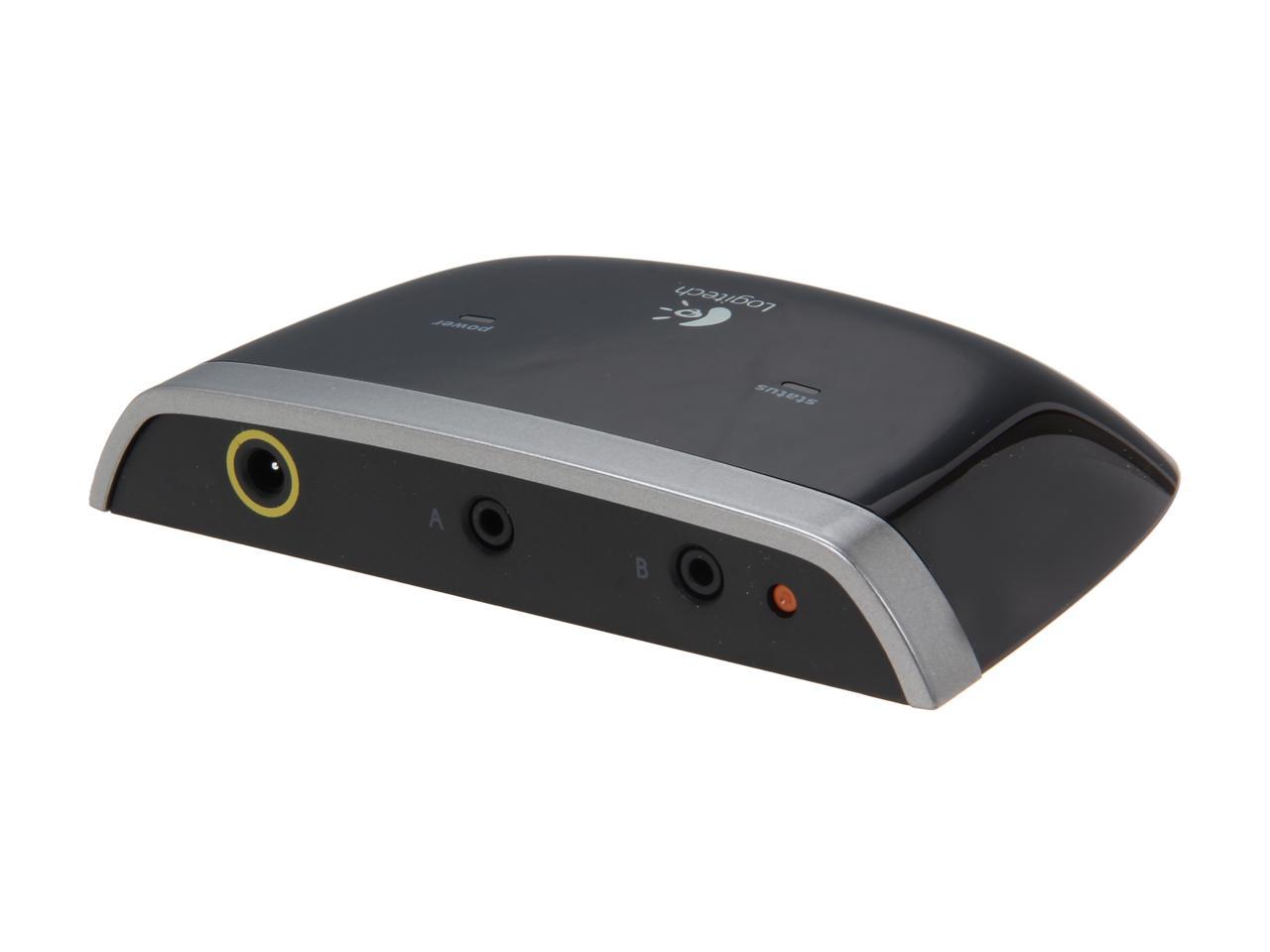 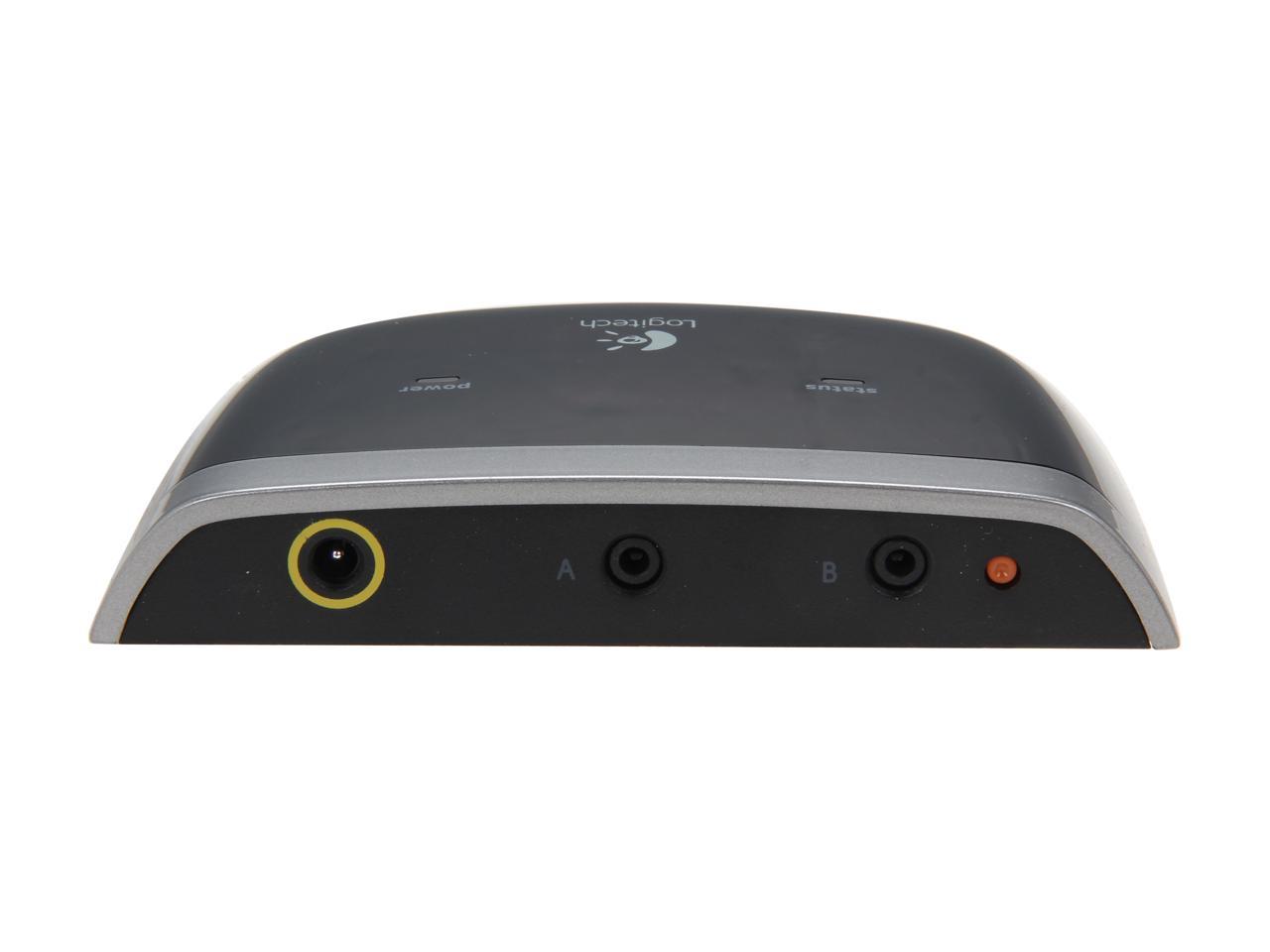 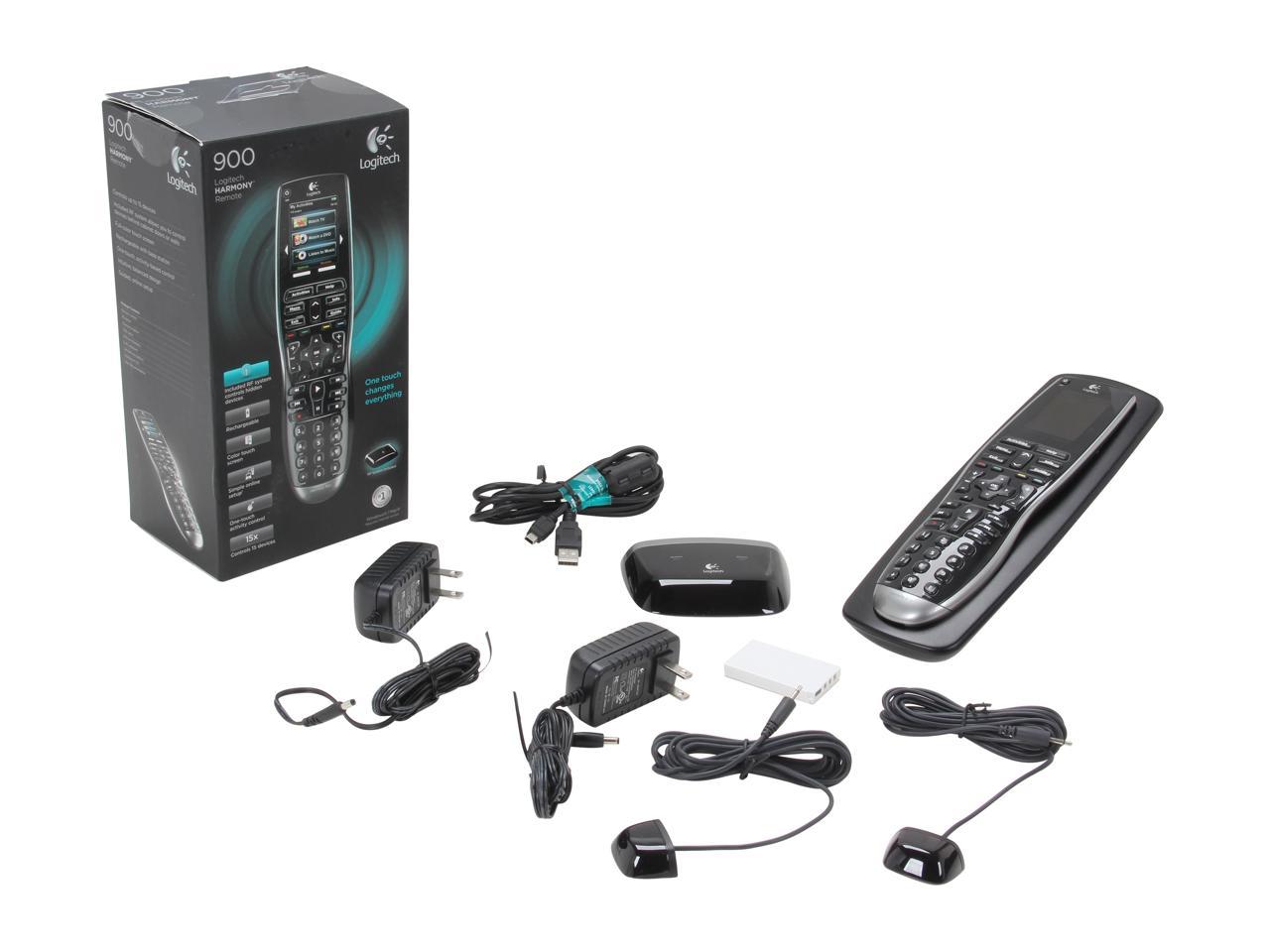 This means the product was tested and repaired as required to meet the standards of the refurbisher, which may or may not be the original manufacturer. Any exceptions to the condition of the item outside the manufacturer’s information should be provided in the listing, up to and including warranty details.
(25) Write a Review
See more "logitech harmony"
In stock.
Ships from Hong Kong.
Most customers receive within 4-22 days.
Overview
Specs
Reviews

The Harmony 900 from Logitech is a marvel of modern remote control.

It has a recharging cradle, so forget about battery replacement for awhile. It's programmable, so when you want to listen to something, you don't have to remember to turn on each component first. It can control up to fifteen separate devices. It has a database of over 225,000 devices; chances are good your device is in there. LCD screen and a Help button mean you're never lost for long.

Regardless of your application, this remote can probably be adapted to it. Check and compare with comparable remotes and decide for yourself that this one is better.

Learn more about the Logitech Harmony 900

Pros: Price. That's about it.

Cons: Had to RMA the first one because the RF system was not working. Got my second one and immediately tested the RF. Still no good. I am not new to Harmony Remotes as I already have a fully functioning 900 elsewhere in my house. Something seems wrong with the batch that Newegg is selling.

Overall Review: If you happen to get a fully functioning one then it's a good deal. Since I can't return it I may have to get logitech to fix it, but who knows how long that will take, or if I'll have to pay shipping. 2 bad RF systems in a row... not cool.

Cons: Decent shape but this is not a refurb, 2 nicks found on the side. Would not power up.

Cons: No Sequences - I used them on 1 previous harmony remote and it is missed on this model. If upgrading from a harmony remote with a number less than 900 you must create a new account and start from scratch.

Overall Review: Logitech does not recognize these refurbs as "official". You will not get any support or warranty from Logitech on these.

Pros: This product works as designed, and all components are included. The RF extender is a very nice feature.

Cons: This is clearly not a refurbished the product. All the parts were basically thrown back in the box, and nothing was even cleaned prior to shipping. This item should be marked "Open Box" or "Used", saying it is refurbished is misleading to a customer like me who frequently gets refurbished items.

Pros: I love this remote. I have installed nearly 30 of them for clients and every single person has loved them. The RF range is great. The configuration is pretty easy to get it exactly how you want.

Cons: I received a pretty obviously used remote, not refurbished. It worked fine for about 40 days, then I started getting a white screen mid use.

Overall Review: A few reflashes of the firmware and a new battery later, I called Logitech to get it repaired/replaced. They said they no longer make this model and asked if their new smart remote product would be an acceptable replacement. Sorry Logitech, no. A smart phone app is not an acceptable replacement for a single physical remote with a screen on it. I have been arguing about it for a week with them and have gotten no-where. I miss the old Logitech. I could buy anything with their name and know I was getting quality and great support behind it. They even replaced one of my headsets out of warranty. That Logitech seems to be gone now.

Pros: Lowest price I've seen anywhere Fast and free shipping Works perfectly Easy setup, however it will take a few times to tweak things to your liking after you become more familiar with the remote Looks great, the whole family assumed it was new Extremely simple to use for even the least tech savvy person you know RF!! I never purchase any tech without tons of research into the device, its competition and its reviews. My home theater room is not very large or complex and all the seating seems to be in direct line with my devices (I cut apart an old wooden dresser to make an entertainment center with all my components, nothing is out of sight or covered by cabinets) so I was heavily leaning toward a cheaper remote without RF. I've had good experiences with neweggs return/replacement policy in the past so I gambled on this refurb unit when I found this deal and so happy I did. RF is THE coolest thing about this remote. Controls EVERYTHING in my room by just pressing a button, doesn't matter where its facing. Very happy I went this route and I'll never go back to a normal remote after having this for 3 months.

Cons: As my first universal remote I don't have anything to compare this to, Everyone seems to scoff at the lack of sequences, which seems like a cool feature and I was worried I'd have trouble without it, but I don't mind.Those with larger setups might prefer a remote that has them. I would however like to be able to rearrange the order of the devices in the device menu. When in the watch tv or play ps3 activities, I occasionally will hit 'devices' to turn on/off my lights or air conditioner, and it takes a page or 2 of scrolling through the devices to get to it. Not a huge issue and I've since learned that it's possible to program those functions to a hard button on the remote so its not a problem for me anymore(unless I want to say change the temp on ac or settings of the lights, then back to annoying device menu). Again, just seems like a simple issue that may bother other users if they have too many devices and not enough patience. Last con is the pictures on the touchscreen. Any activity or device programmed has a name + picture next to it that you can change, but you have to use Logitechs pre-programmed photos. These pictures also come into place when choosing favorite channels, but you're now allowed to upload custom photos. I found websites that have tons of channel specific pics to download and use for your remote, but none with activity or device pics because Logitech doesn't allow you to use custom ones for some reason. This is sort of annoying for me because my computer is a device (they do have a pc pic for devices) but my activity labeled "Use Computer" has the picture of a dvd player next to it. Slightly annoying to look at but at least I was able to change the name of the activity and it does what I want it to.

Overall Review: Any cons I can think of are EXTREMELY minor details that have to do with the remote itself, not with this refurbish deal that newegg offers. I see many people receiving broken units and all I have to say is, if you look into this remote and decide you like it, buy it here and have patience. Newegg will replace it until they get it right and you'll have saved $150 on a fantastic remote. My first one came in the original box with everything in it and no signs of previous use, everything was clean and wrapped in plastic. No real complaints so far and I'm not worried as I bought the extended warranty for an extra $20. One last thing to add, I've seen on many reviews from other sites that people like the charging cradle cuz they always know where to find the remote. However, the batteries are not meant to be overcharged like that. They will eventually expand and if left in the remote too long after that will not only destroy the battery but the entire unit and I've seen on a few forums that Logitech considers that the owners fault and not a malfunction so no replacement. Charge it when it needs to and keep it safe and off the cradle when it doesn't.

Pros: Device's technology is impressive. Functions well for most part.

Cons: Device accessories have significant scratches and look as if they were pulled out of the trash. Manufacturer won't provide support unless a "small" fee is paid.

Overall Review: Contacted Logitech Support with an issue and they said my device has been registered to three other people in the past. They wouldn't support the device without charging a fee. Refurbished in common terms presumes certain minimum standards, one being the expectation that you can still get support on a purchased product. I've purchased many refurbished products in the past from Newegg and all were in impressively good shape, but it seems someone has lowered the bar. Disappointed.....

Pros: Don't know can't get it to work

Cons: Unit will not update when hooked to computer

Overall Review: I rma'd my first one. I hooked it to my computer and ran the Logitech Software to upload commands to it and received a bad region error. The unit they sent back says repaired but it does exactly the same thing. Can't use this piece of garbage and newegg has not responded to my request for an rma for the most recent unit. Don't waste your money!