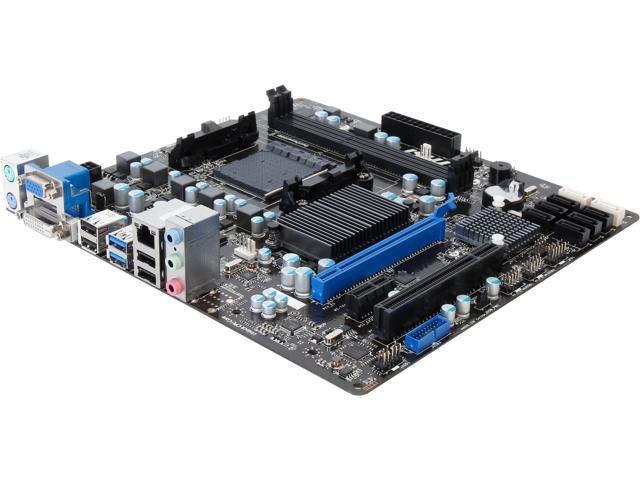 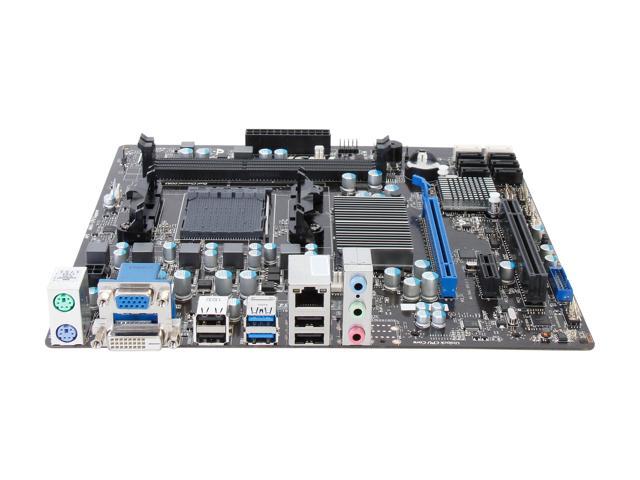 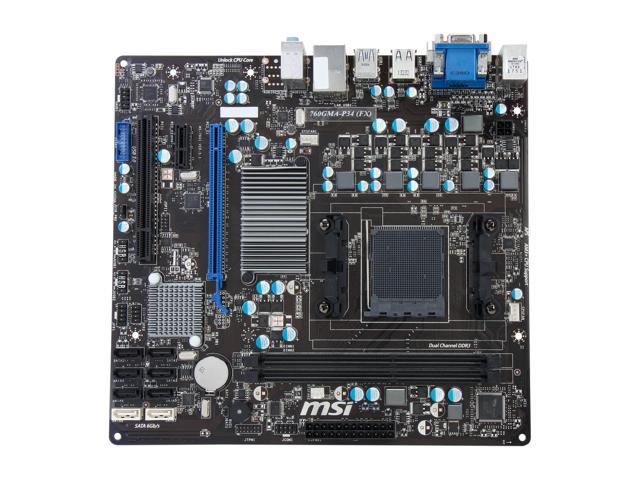 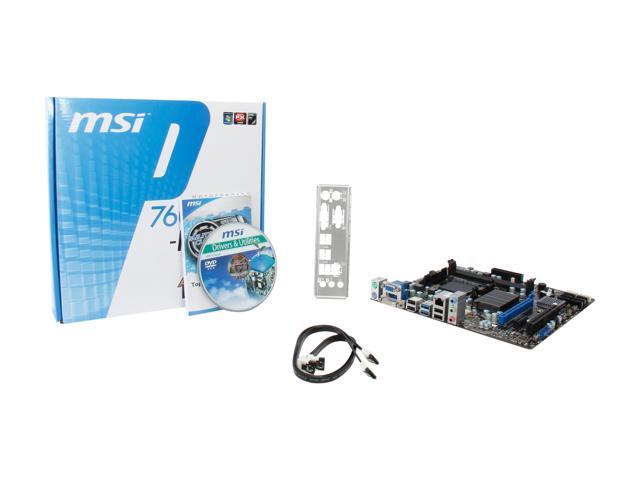 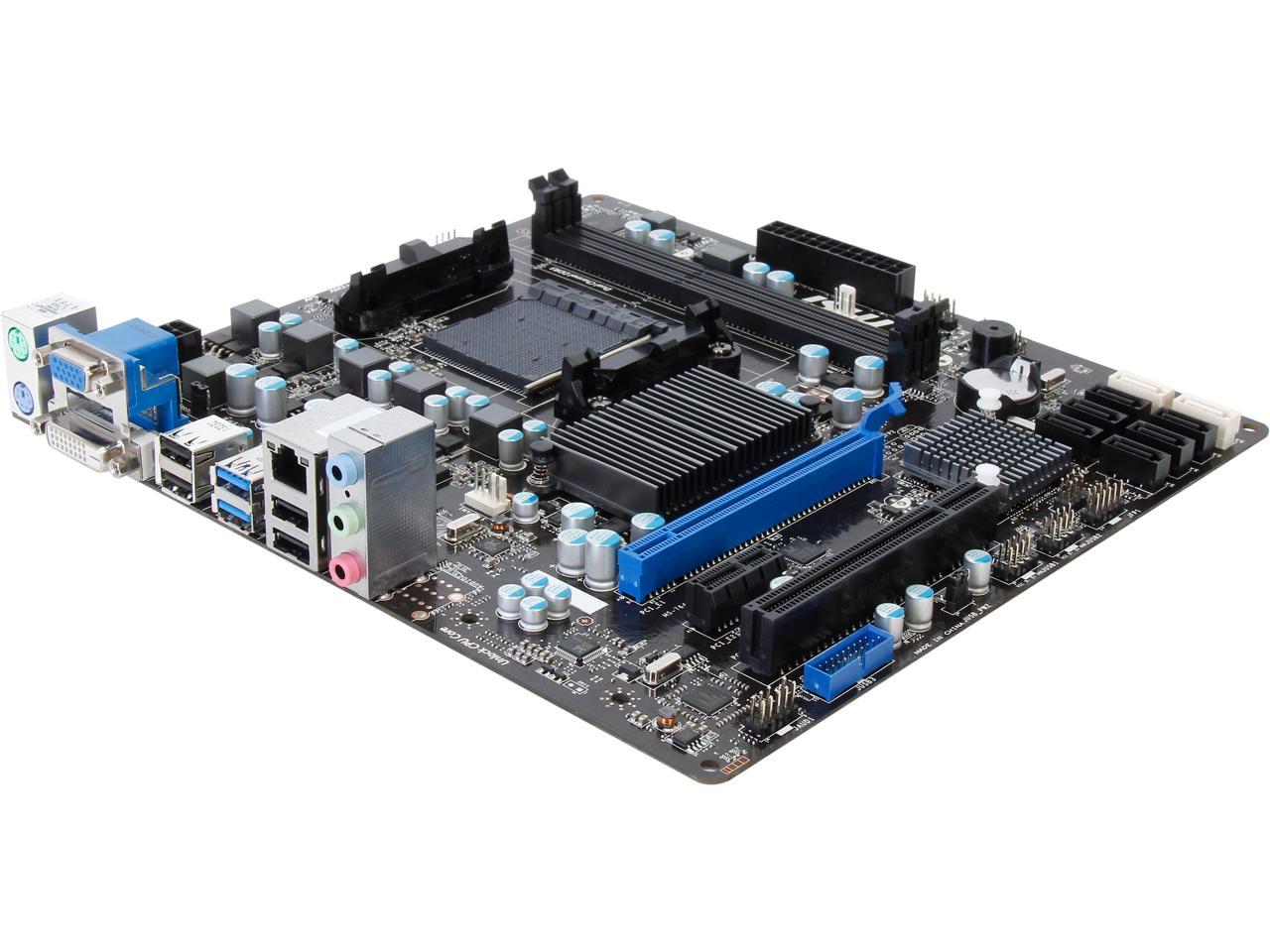 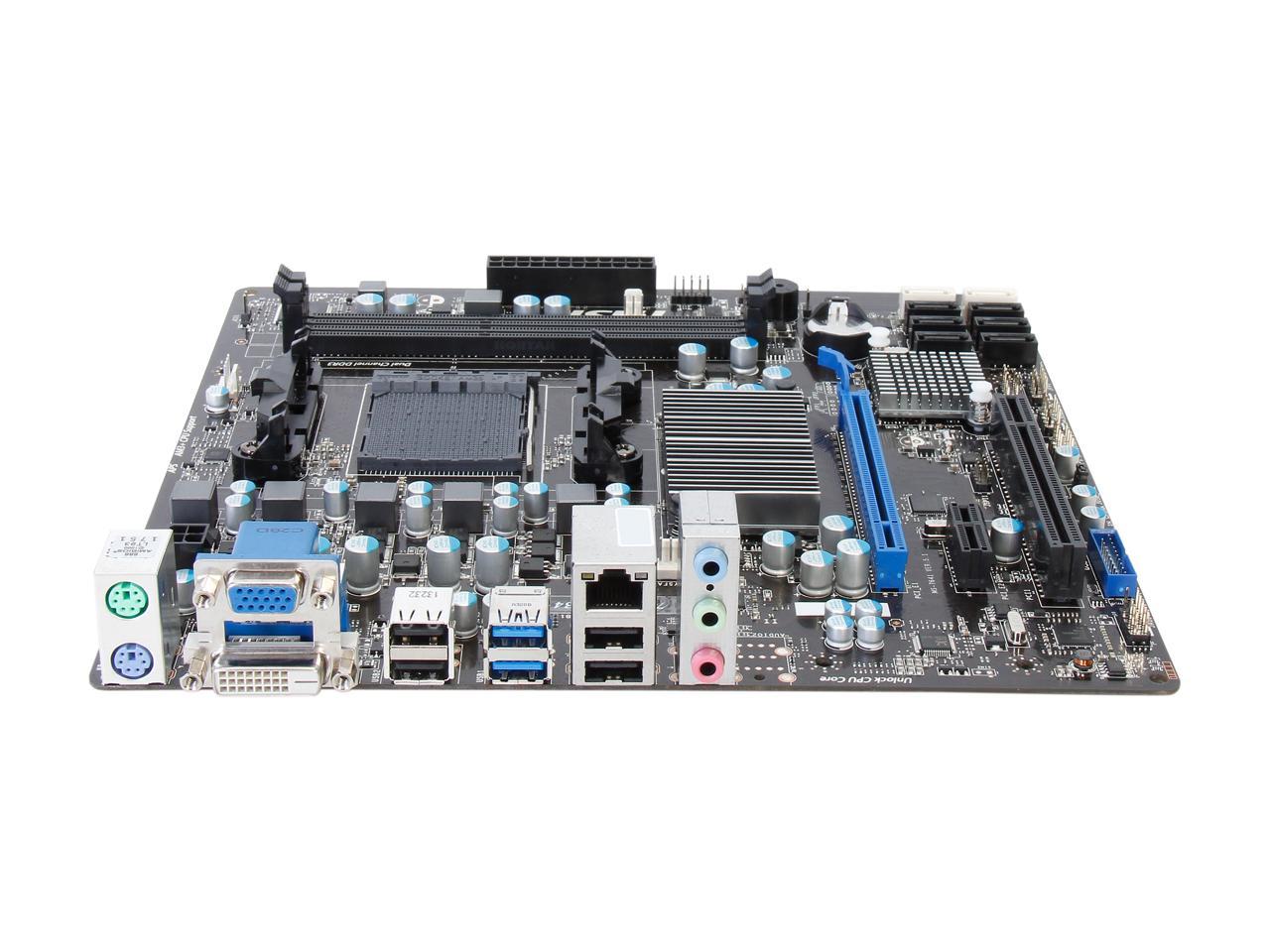 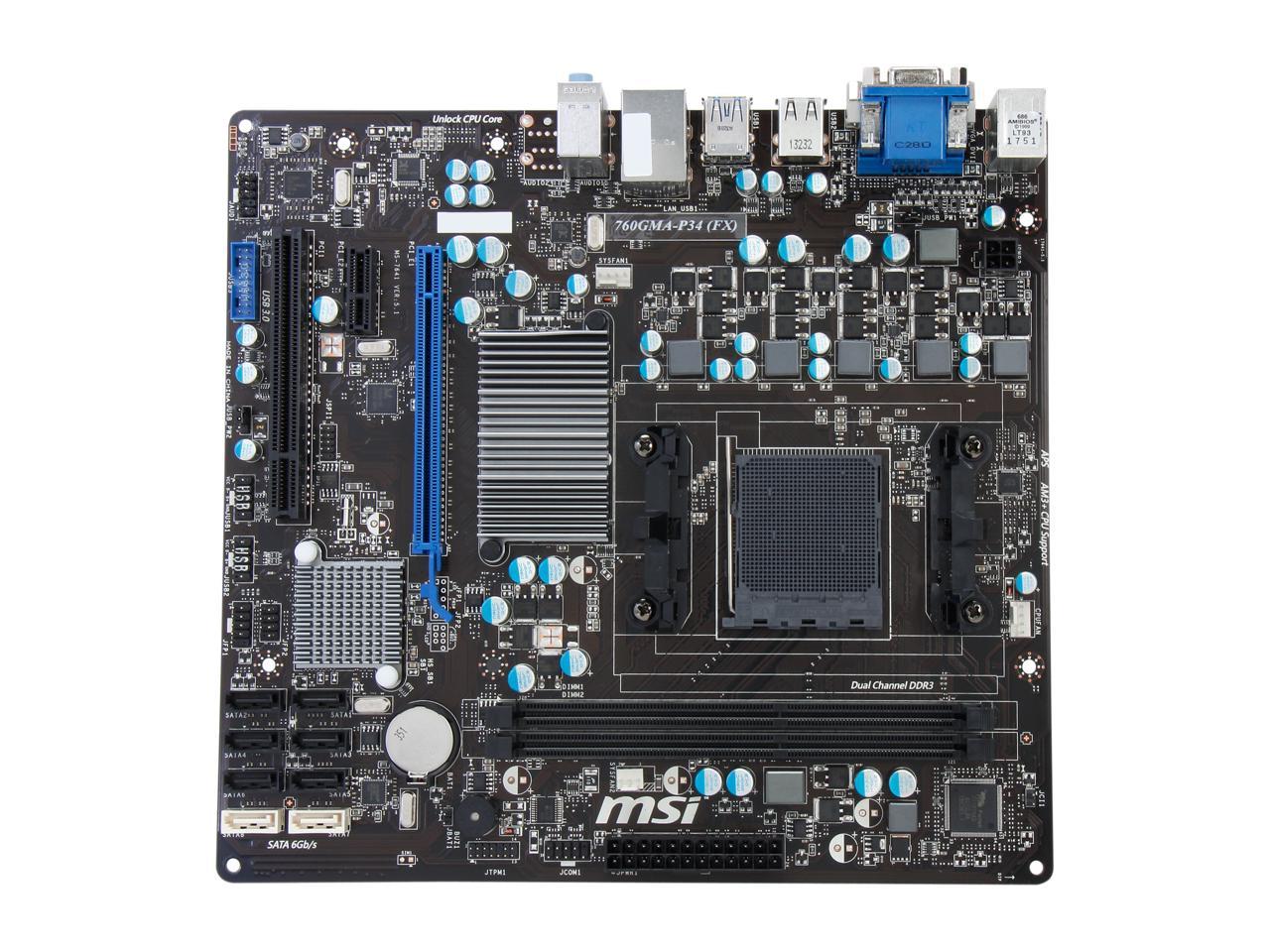 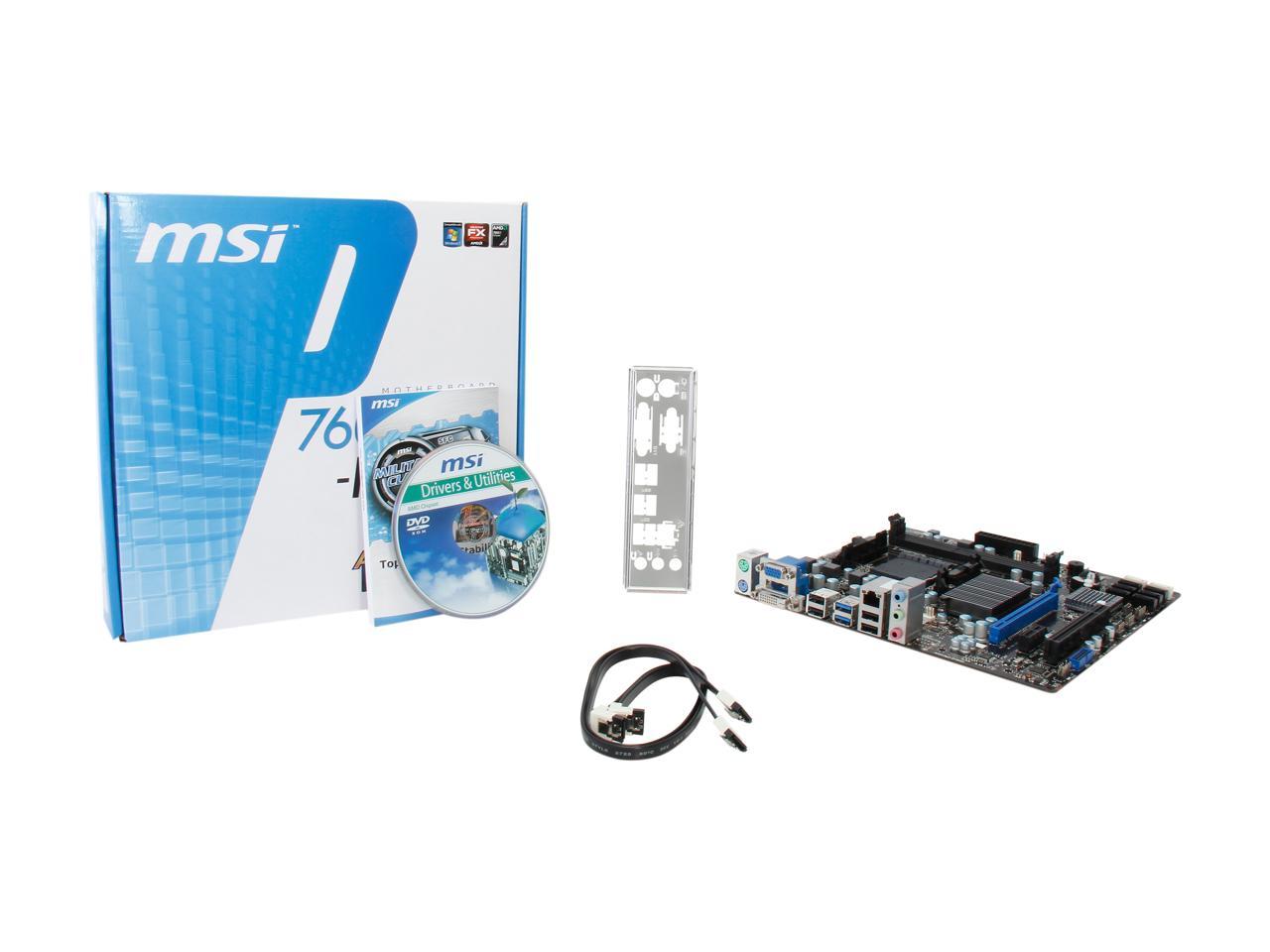 This means that the product has been opened, possibly used but is in perfect working condition with no signs of cosmetic or functional defect. Product may includes warranty, and accessories found with the original product. Product may or may not be in the original packaging. Returned items with minor packaging defects fall under this category.
Motherboard and sata cable only, no manual or accessories
See more "amd fx motherboard"
In stock.
Ships from China.
Most customers receive within 4-31 days.
Overview
Specs

Powered by AMD 760G + SB710 chipset, the MSI 760GMA-P34(FX) motherboard offers a great foundation for you to build an AM3+ CPU based system. It supports DDR3 memory modules up to DDR3 1866(OC), HyperTransport 3.0 technology links and PCI Express 2.0 graphics interface to get the most of your high end components. The Integrated ATI Radeon HD3000 graphics delivers decent DirectX 10 graphics performance that's great for HD video playback and web animation acceleration.

This motherboard adopts all solid capacitor design for enhanced life span and stability. The Active Phase Switching (APS) technology helps save energy and reduce heat generation by switching off power supply when no electricity is needed. The latest SATA III and USB 3.0 are also built onboard, thus you can get the most out of your SSD and high-speed peripherals.

Active Phase Switching, APS, technology is an intelligent design that helps to save energy on MSI’s motherboards. The underlying idea is to switch off the power supply as soon as no electricity is needed, and when the system needs more resources again, APS will automatically adjust electricity supply accordingly. APS will automatically detect your processor’s loading at any given time and save energy accordingly. This is only possible by means of a very advanced power controlling technology. Other than software-based solutions, APS technology stands out from MSI's own research. The specially developed IC chip can operate automatically depending on the demands of the power supply, which is to reduce the total power usage.

MSI’s Unlock CPU Core technology, exclusive from MSI, can unlock the hidden cores in the CPU by making a few selections from the BIOS. By unlocking a Phenom II X2 CPU into a Phenom II X4 CPU, users can boost the CPU performance over 104%. In Addition, MSI discovers the ability to unlock Phenom II X4 960T to a 6 core CPU through the same BIOS setting. At same time, MSI was the first who could unlock a 4-core AMD CPU to a 6-core because MSI does not use any "unlock" chip on our motherboards. MSI engineers developed a BIOS technology to unlock cores which can be easy upgraded via new BIOS. This new MSI software tool allows users to unlock CPU cores from Windows with just a few simple clicks, no need to enter the BIOS.

Mobile consumer appliances are getting more and more attention in current day fast moving life style, with smart phones and tablets almost becoming a fashion accessory. However, many ordinary personal computers cannot charge some of these devices, making it difficult to stay connected. The MSI Super Charger is a Windows resident program capable of revising the power supply mode of your USB port to become more powerful. Once your phone or tablet is connected to your USB port, the Super Charger sends a signal to initiate its charging circuit, making it a really smart and convenient charging solution for mobile computing needs. Compared to common motherboard which need extra BIOS chips, MSI’s M-Flash has a double advantage which doesn’t need extra components and secondly, all your BIOS data will be saved in the USB drive. The stored data does not only have backup and upgrade function, moreover it can also be seen as a portable BIOS chip which is actually able to boot up your PC.

Winki 3 is a free Linux-based O/S which is based on the Linux core. With an ultra-fast booting speed and a multi-language interface, the built-in Winki 3 provides an easy-to-use internet environment that includes the most popular functions such as internet surfing, web mail, instant messaging, picture browsing, and more. It's the most practical way to be online in the shortest time.

In the past, users needed to adjust settings for CPU and Memory in BIOS menu to overclock. The relation between these ratios and clocks speeds are extremely complicated, taking up to 30 minutes to find the right settings for an optimized PC. Auto OC Genie simplifies it all into one button press. Where high-end CPUs are usually priced around 1000 USD, Auto OC Genie allows you to take a 200 USD CPU (1/5 the price) to reach the same performance. Your C/P ratio rises up 500% immediately for the ultimate value.