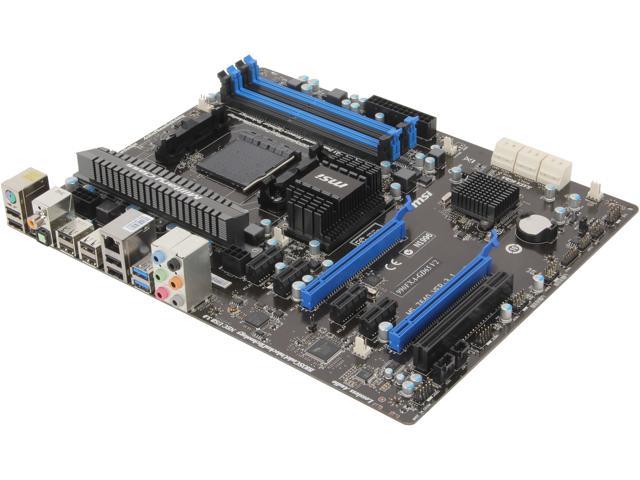 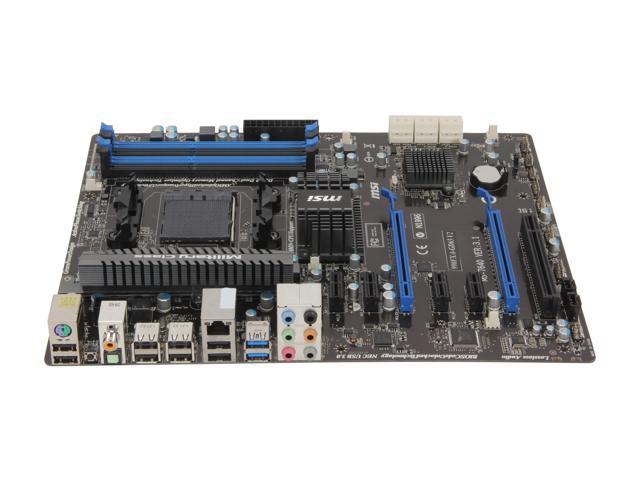 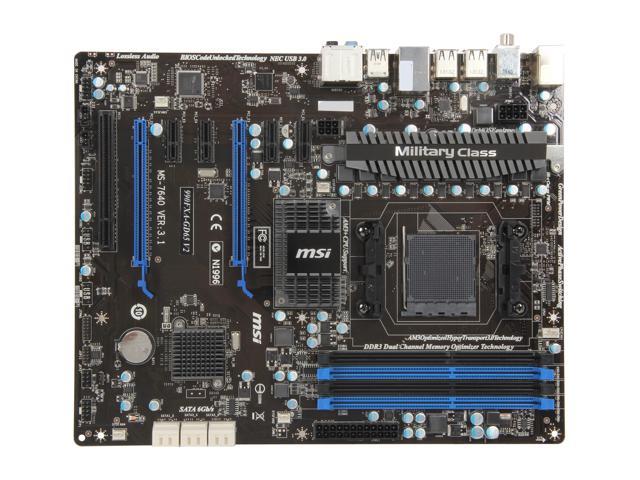 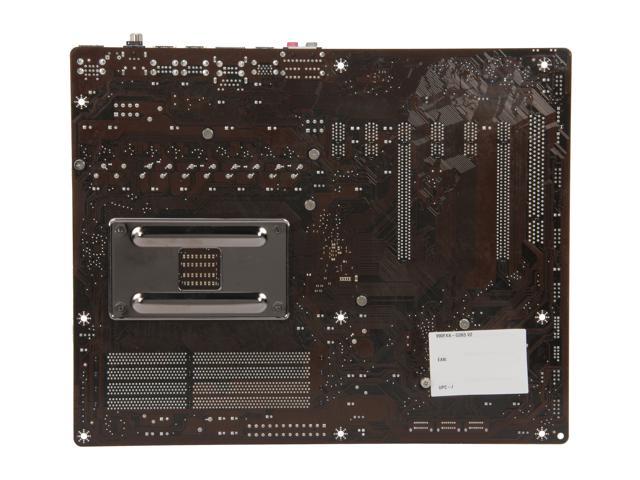 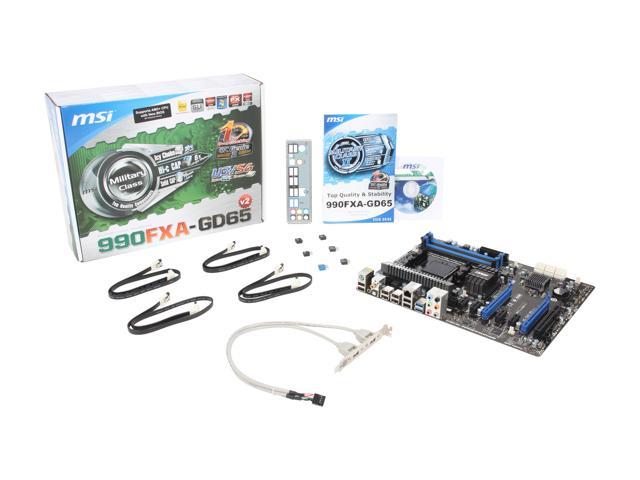 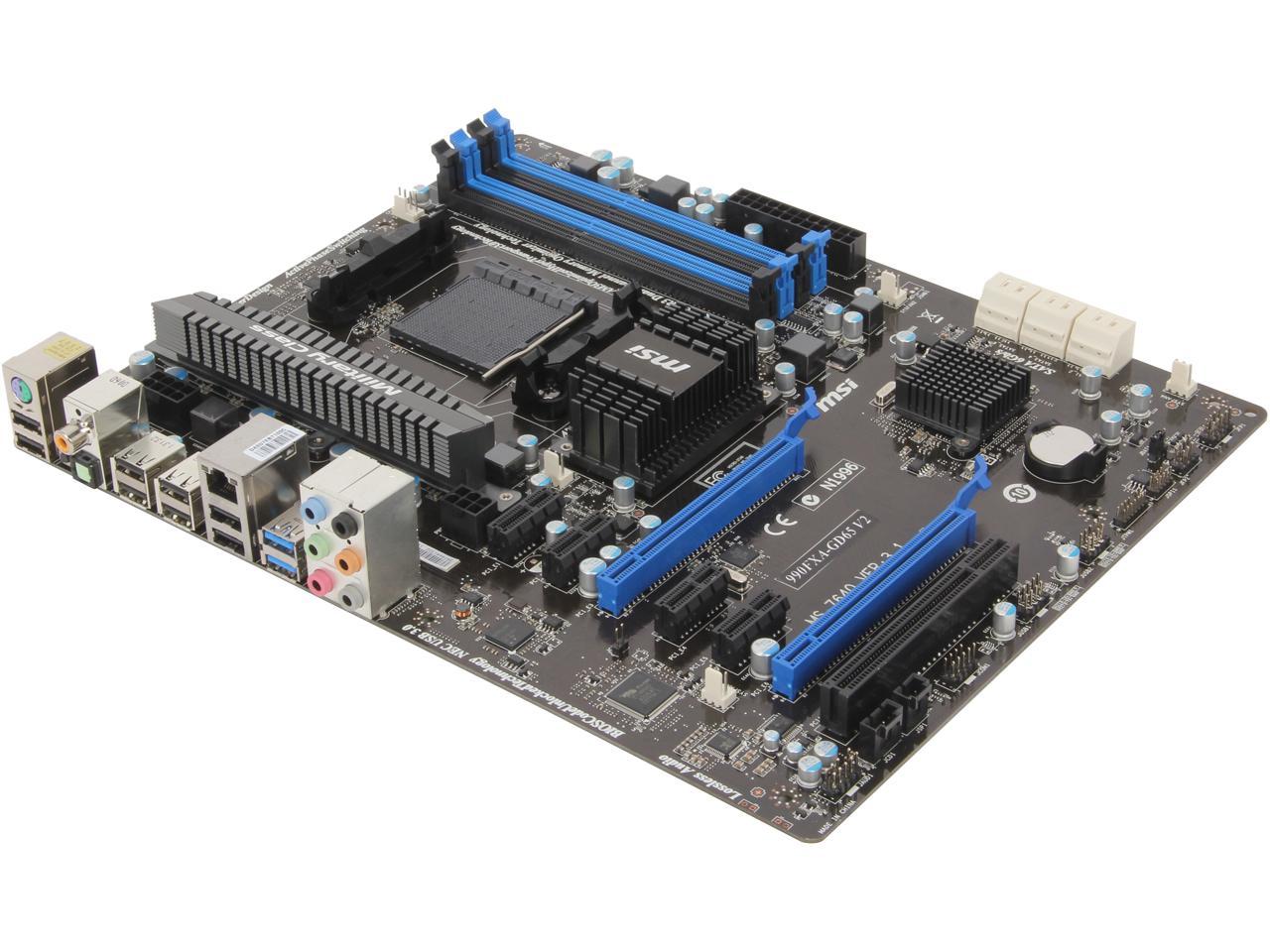 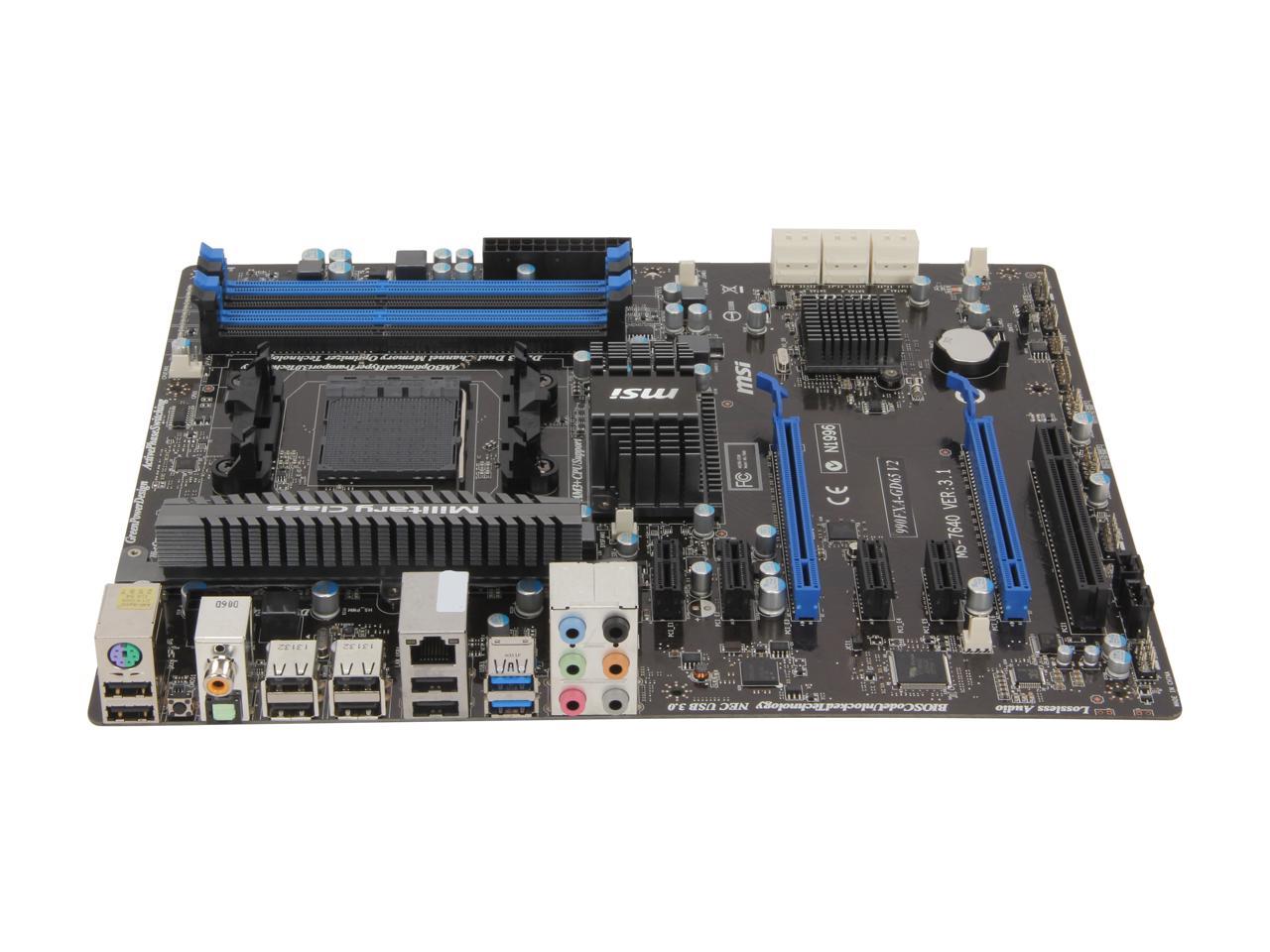 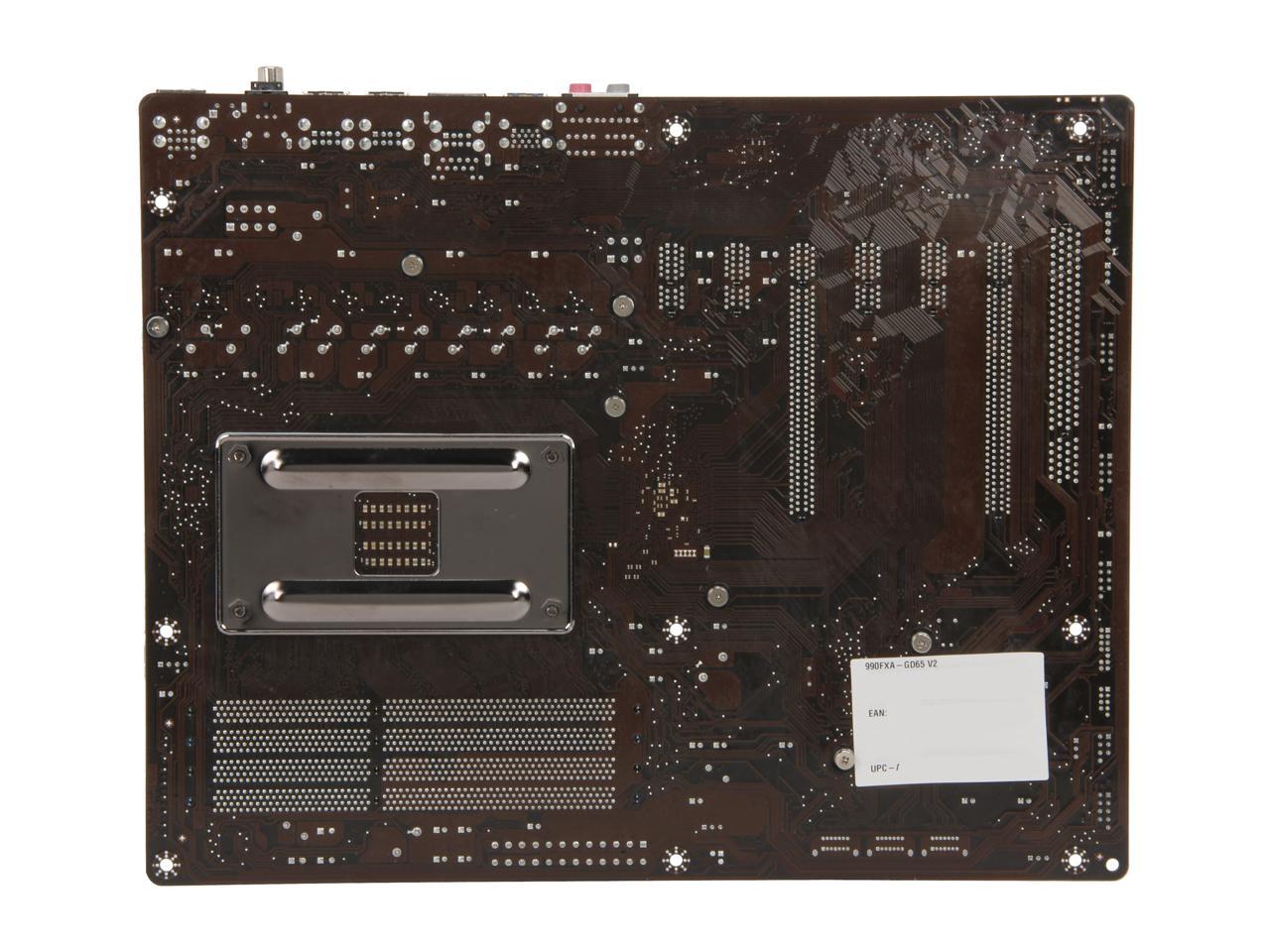 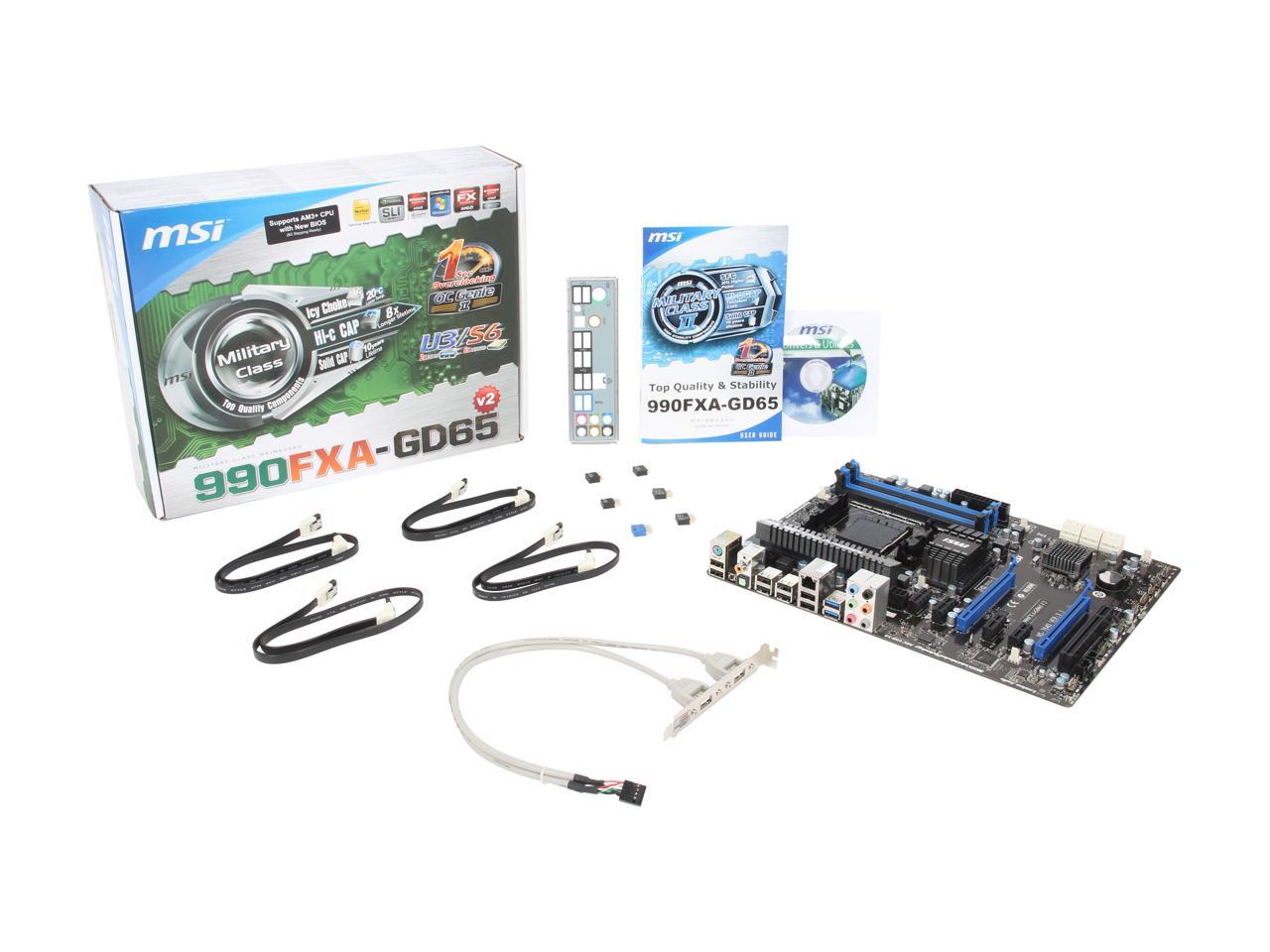 (92) Write a Review
OUT OF STOCK.
LOADING...
Overview
Specs
Reviews

A great blend of performance, features and quality, the MSI 990FXA-GD65V2 AM3+ motherboard offers a solid base stone for your power house with everything you want and nothing you don't. AMD 990FX chipset natively supports the AM3+ processors allowing you to make the most of the latest computing technology. Take advantage of Military Class Components for industry leading stability and reliability. Unlock hidden CPU core and potential with a simple press of a button via the OC Genie. Enjoy a great boost of system performance with USB 3.0 and SATA 6Gb/s. Lossless 24-bit/192KHz HD Audio, an excellent complement to the solid performance, push your experience to a new level with exquisite, immersive sound reproduction.

Pros: Nothing, unless you like sarcastic responses from the manufacturer telling you to flash your board with an incompatible BIOS.

Cons: So, MSI responded to my review with the following: Manufacturer Response: Dear Valued Customer, We apologize for the issues that you are having with this product. For your info, the latest BIOS released on 9/26/2013 which is ver K.3. http://www.msi.com/product/mb/990FXA-GD65.html#/?div=BIOS If you have any questions, please kindly get in touch with our tech support team directly at 626.271.1004 for assistance during regular business hours from M to F, 6am to 6pm Pacific Time, or you can email us at usreview@msi.com. When contacting us, please kindly include your product info, thank you. Best Regards, MSI Review Team | usreview@msi.com I went into great detail in my review, about how the v1 board is supported with new BIOSes, but the newer v2 is not. Well, the geniuses at MSI must REALLY want me to break my board giving me a link to a BIOS that is NOT compatible with my board, due to it being for the V1 version. If the V1 and V2 versions of this board were compatible, they'd have both board represented by a single list on a page. The V2 version of this board has a seperate page and a seperate list of compatible BIOS's. And when I use MSI's Windows based BIOS updating software, it says no new BIOSes available. So, it's safe to say that this board isn't supported.

Overall Review: Apparently whoever is responding to these reviews has no problem with helping the users destroy their motherboards by flashing the wrong bios meant for an older version of the board. Stay Classy MSI....

2 out of 6 people found this review helpful. Did you?
Manufacturer Response:
Dear Valued Customer, Both V1 & V2 are 100% the same hardware except packaging. If you have any questions, please kindly get in touch with our tech support team directly at 626.271.1004 for assistance during regular business hours from M to F, 6am to 6pm Pacific Time, or you can email us at usreview@msi.com. When contacting us, please kindly include your product info, thank you. Best Regards, MSI Review Team | usreview@msi.com
Michael B.
Ownership: 1 week to 1 month
Verified Owner
Alright for the price.2/9/2013 1:23:55 AM

Pros: I now have full x16 bandwidth for each of my 7950 cards now on a Atx board. My last board was Matx now they have room to breath and at 8x 8x on the previous board they weren't bottlenecking so this was still future proofing to a point. This can max out to 32gb! only using 16gb right now @ 1600mhz & it's nice to be able to use ram disk now for projects. I added two windows patches for the fx cpu and that helped a lot for stable operations. Such as disabling core parking.. This board does great overall.

Cons: Was hard to get stable, just installing... northbridge wasn't stable at default bios settings.. hmm well, stable @ around 2200+/- Mhz for me.. No higher functions in bios such as LLC, no way to change ram timings either. I had some trouble getting 4.2ghz stable on a fx 8320 with this board and 4.3Ghz was very hard but finally stable even though my temps are great since i'm water cooling about 53c full load @ 4.3 using Argus to monitor temps has been the most accurate for Amd. Your not going to get 5ghz with this board. I couldn't get chipset drivers to install.. I had to use other methods to get it to install. catalyst seems like its not playing well with 990fxa right now so double check device manager & check driver dates if they are 2006 you most likely have a problem and if they aren't using resources. I checked with Orca to look inside the .msi files for the chipset & it's disappointing to see the state amd is in.. perhaps the next update will be better not msi's fault i suppose.

Overall Review: You might not believe it but this setup beats my previous 1156 i7 @4.2 not by miles but it still outperforms overall in games and you usb3 & plenty of sata 6gb/s which made my ssd's happy.. boot time is great.

Pros: -Latest Bios does Support AMD FX-8350 -Latest Bios Supports windows 8 features -Easy to use Bios + Very stable -Great hybrid performance with it's CPU phase control. Great power savings when idle and performance when needed. ( With C6 State enabled + HPC ON + Cool & Quiet ON, Turbo Disabled and CPU Clock set to 21x on my 8350. Fast switching between 1.4ghz to 4.2ghz with out any hick-ups.) When playing games or doing something heavy all cores stay locked at 4.2ghz - The VRM's run surprisingly cool. - Both 16x Slots run at full 16x speed. ( The MSI website made it look like it was 16x8 but I was like naw it's an 990FX, it was an typo )

Cons: - Sound Baster Recon3D PCI-E does NOT work in the PCI_E2 Slot. However it DOES work in the PCI_E1 slot, but you have to modify the northbirdge cooler to get it to fit. Btw you can take off the MSI logo from the north bridge and stick it on your case. - The optimized default bios settings are great expect for one thing, it defaults to IDE mode instead of ACHI. - Manually overclocking your ram on this motherboard is an bit of a pain. - Don't use the chipset drivers on the CD, download it from AMD.

Overall Review: MSI should update their website for this motherboard, the latest bios it was shipped with is not even listed on the website nor is the FX-8350, because of an lazy webmaster it must of greatly hurt the sale of the motherboard. The 6-pin power connector was an dumb idea. Would of been best to use an standard 4 pin connector. Because most people need their 2x6 connector for the video cards and some need all 4x6 connectors for SLI. However the 6-pin power connector is NOT needed. It's just extra power to help keep stability in extreme overclocking.

Overall Review: It's working and I have been breaking it in pretty good with SETI@Home running full bore. 100% CPU, and utilizing the CUDA cores on the 660 GTX's.

Pros: -BIOS interface is wonderful, I'm loving the OC Genie and the little extras that can make life a bit easier on occasion. -Beautiful looking board (So, looks don't always matter, but to me, if a board looks bad aesthetically, they probably didn't put too much care/effort into it when they made it) -Paired it with an AMD Phenom II x4 965 Black Edition and they're working beautifully together.

Cons: -I was KIND OF terrified when I had issues plugging the 24-pin power plug from my PSU into the board and was having to put a LOT more pressure on it than I would have liked to get it secure... but that may have been the PSU's problem, so I won't knock off an egg since I don't know for sure.

Overall Review: Everything runs great on this board so far! If I have any issues, I'll have an updated review.

Pros: Love the bios on this. First time I've seen one where you can navigate using the mouse.

Cons: Can't really think of any.

Overall Review: Its a motherboard and it works, plain and simple. Booted up first try with an AMD 8350 and 16gb ddr3 2133 with no problems. This is my second MSI board and I have no complaints.

Cons: Died after 3 weeks w/ only *At most* 30 hours of actual use. The M-Flash is a joke, DON'T TRY TO FLASH BIOS EVER AGAIN!!! Horrible support from MSI. Also like others have stated, it has a very poor board design. There are MOSFET heatsink issues, the SB is in the way, VERY odd PCI slot placement and stability issues.

Overall Review: I upgraded from an 880FX and I am glad I still have it, I much prefer it to this dud I will be using my refund to purchase a GB UD3 and save a couple bucks. *Newegg support is AMAZING!* Love u guys!

2 out of 2 people found this review helpful. Did you?
Manufacturer Response:
Dear Valued Customer, Based on the symptom you reported, we suggest you checking following steps below since many reasons can cause the situation like this , 1. Check and make sure that power are connected correctly and firmly (JPWR1, JPWR2), clear cmos. 2. Check your other major hardware’s (memory, video card, CPU and power supply) to ensure that they are not the cause of the issue. 3. If you need further assistant, please feel free to contact our technical support department directly at 626.271.1004 from M to F, 6am to 6pm Pacific standard Time. Best Regards, MSI Review Team | usreview@msi.com
Robbie R.
Ownership: 1 week to 1 month
Verified Owner
Very Nice12/15/2014 10:33:57 PM

Cons: none, hasn't had one issue since i bought it. Fixed all my computer's issues

Overall Review: I bought this to replace my Gigabyte UD3 that has been acting up. (Getting warrantied atm) I immediately noticed a huge increase in speed and responsiveness. Fixed all the issues I was having. I am running inline with: FX 8350 Corsair 16GB 4x4GB ADATA 256 GB SSD