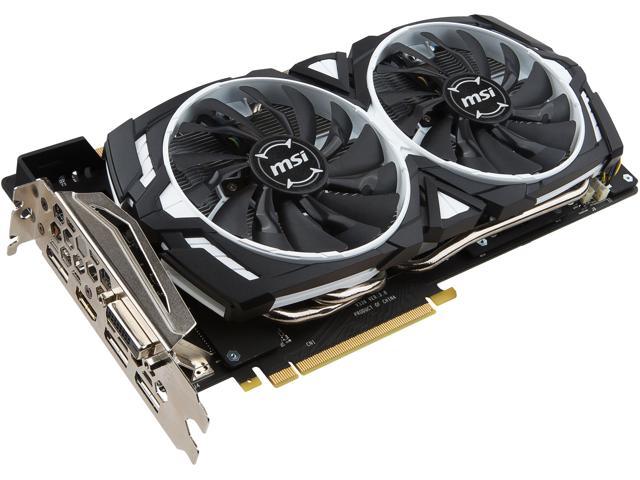 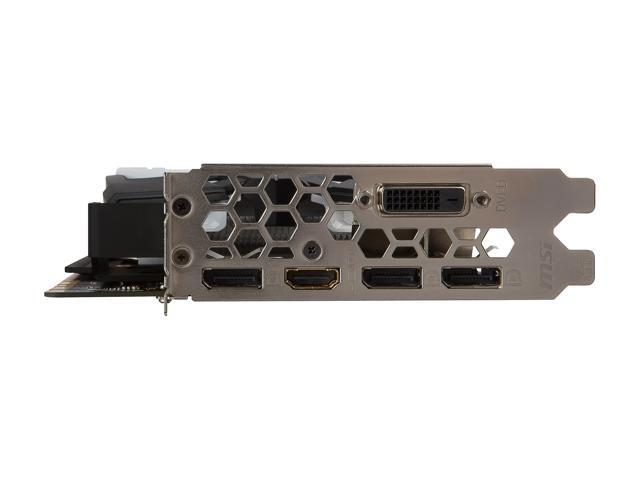 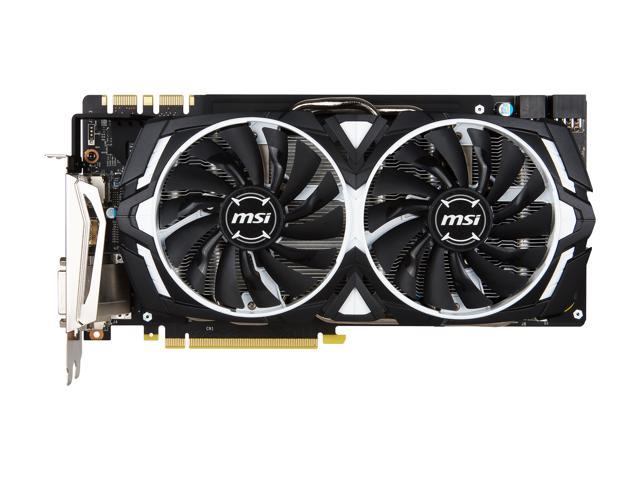 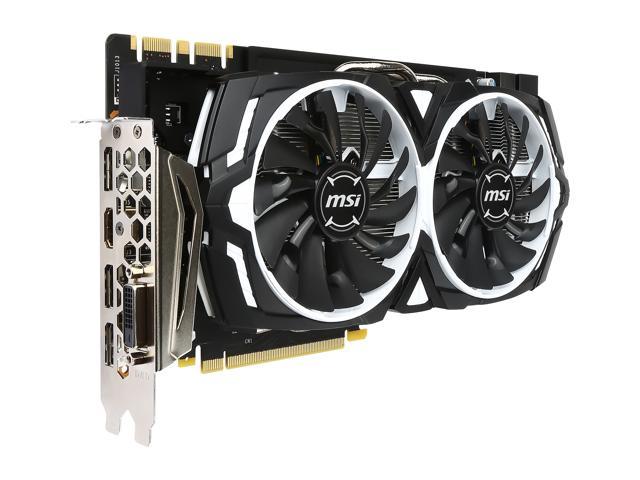 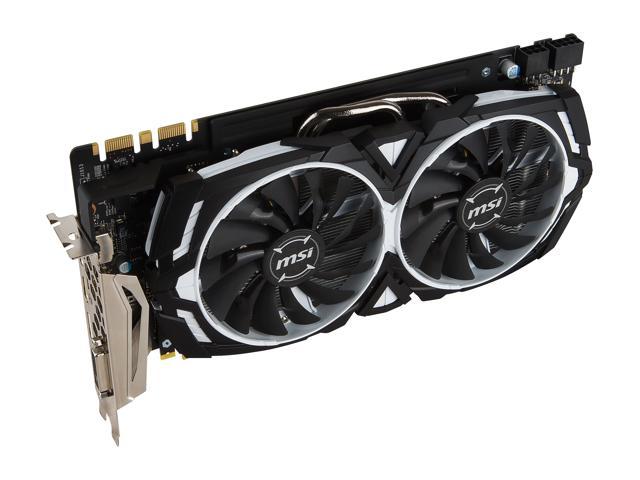 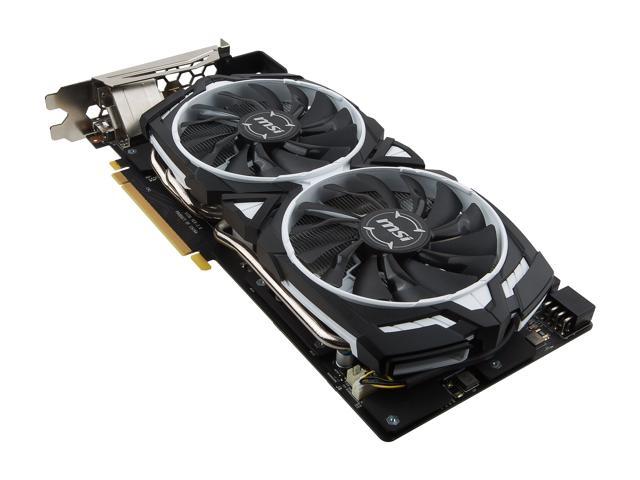 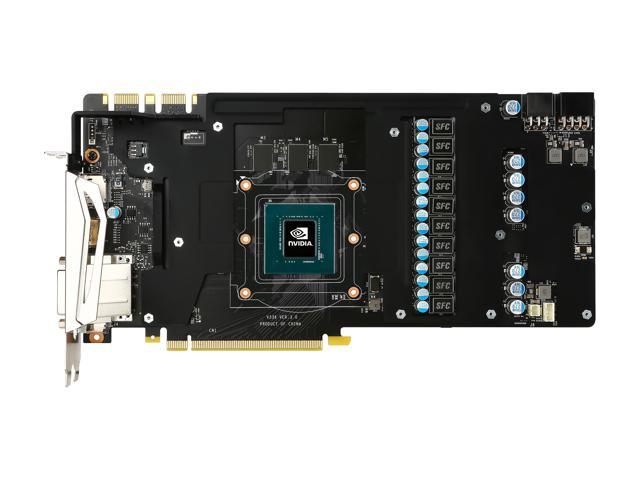 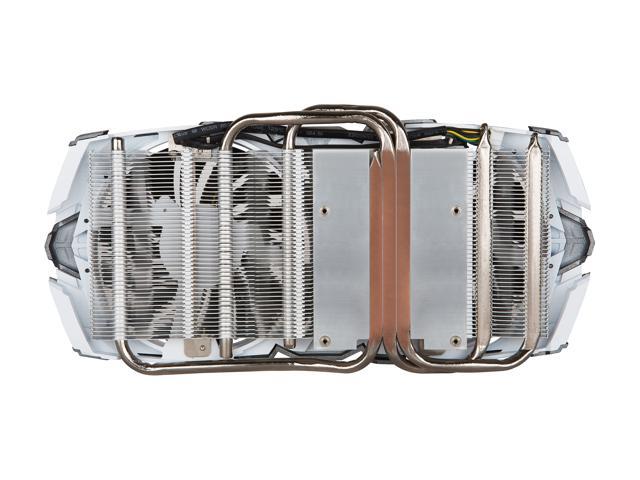 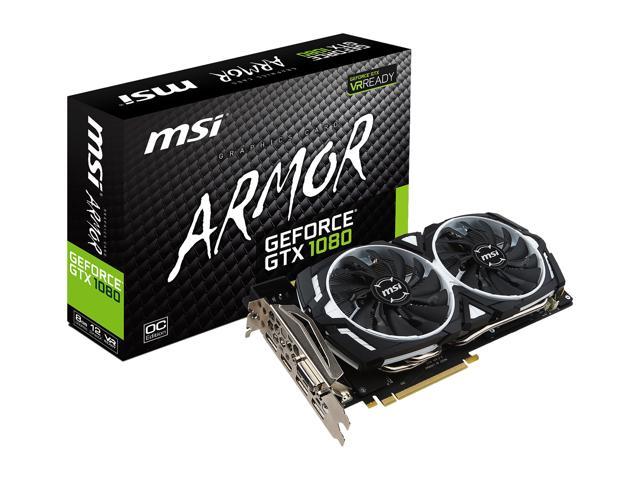 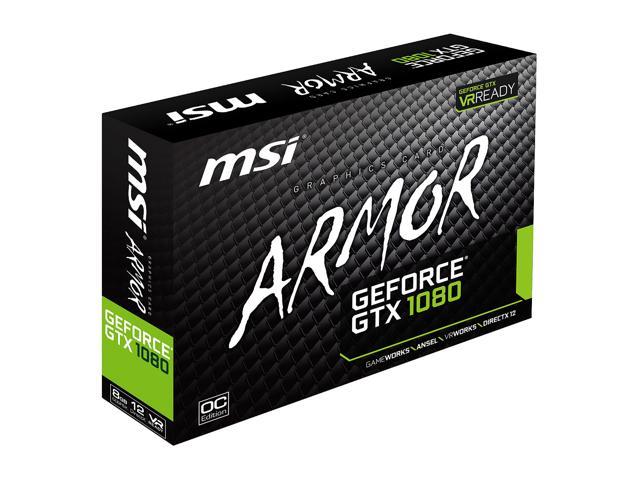 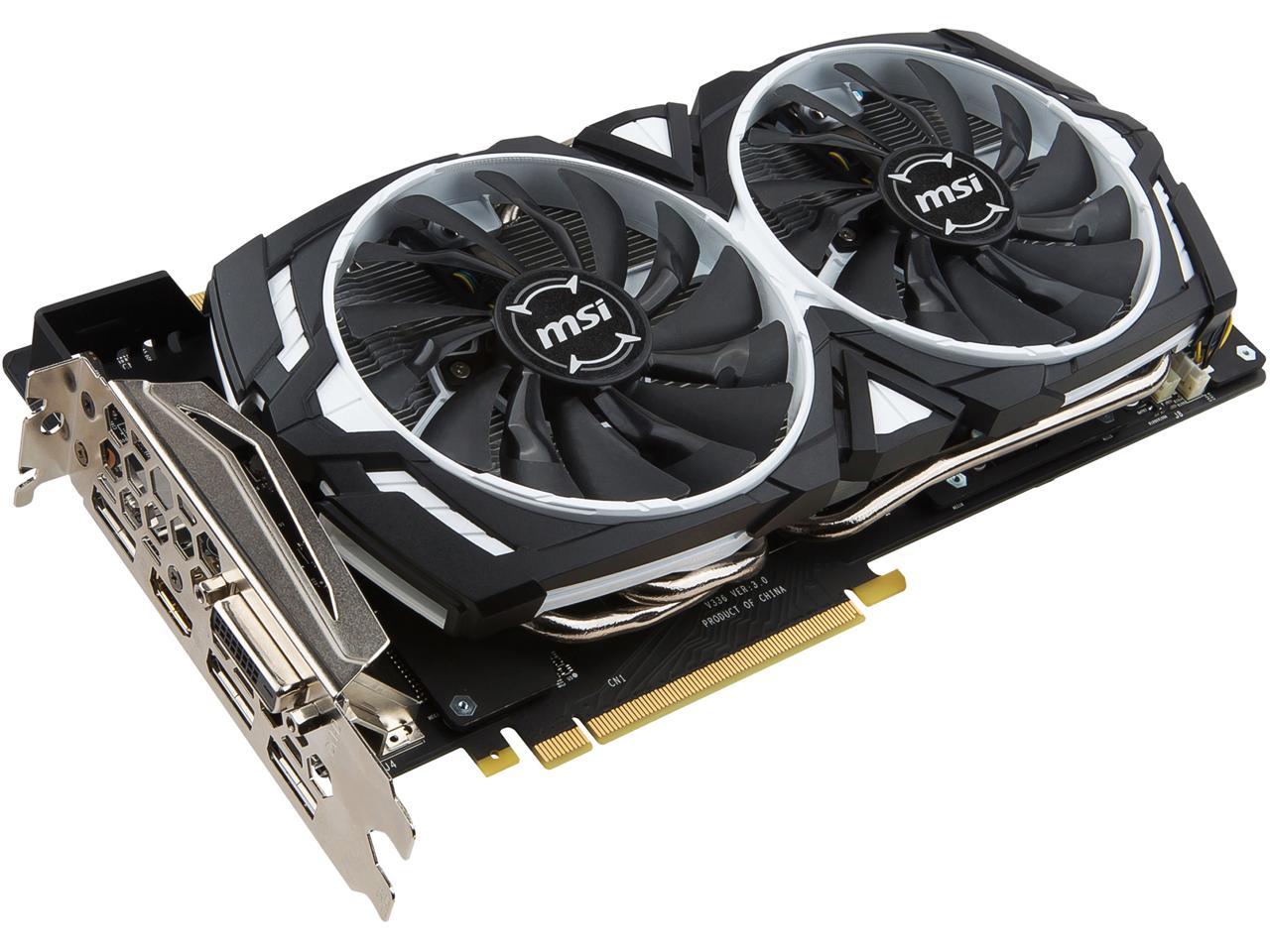 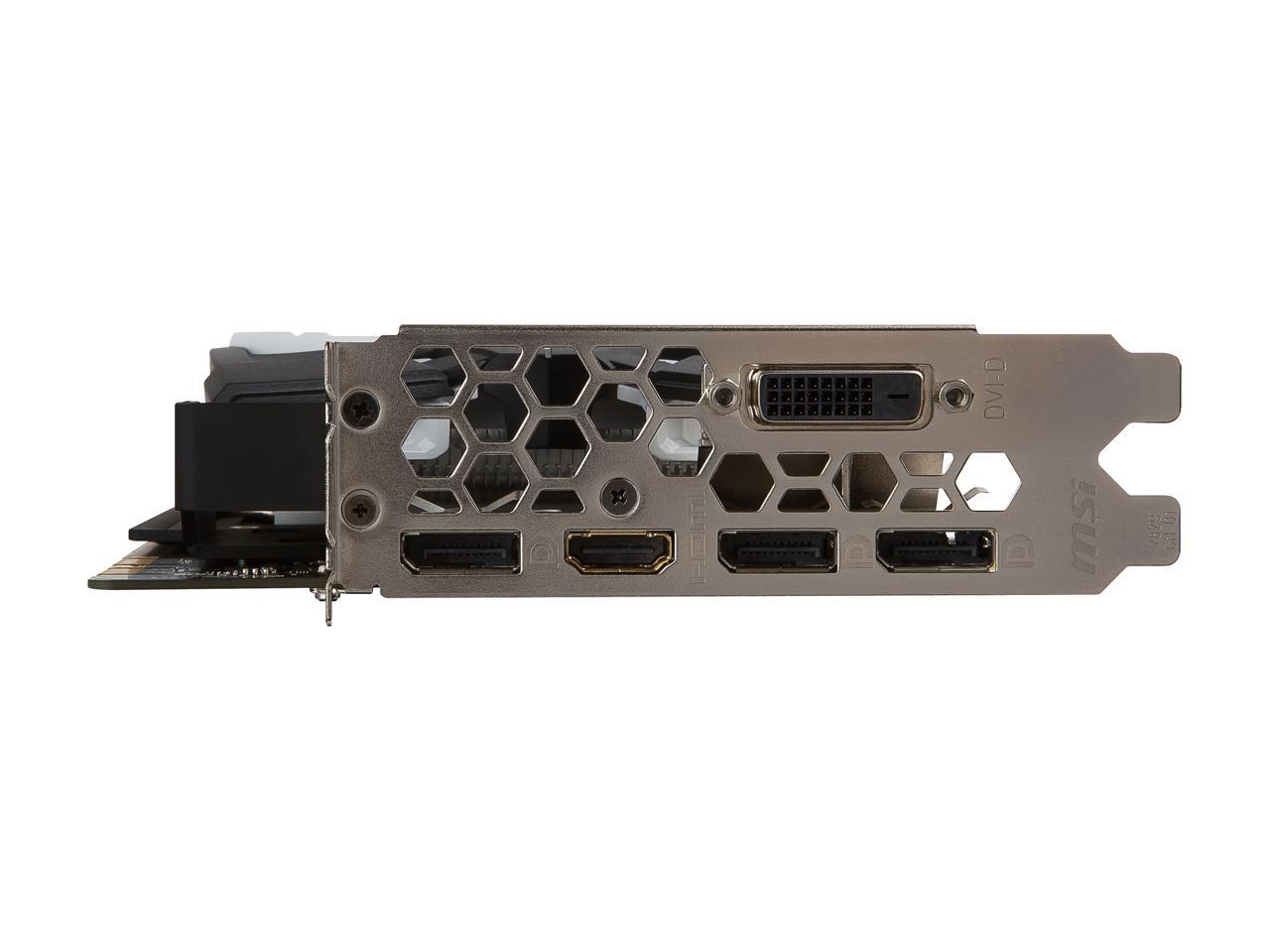 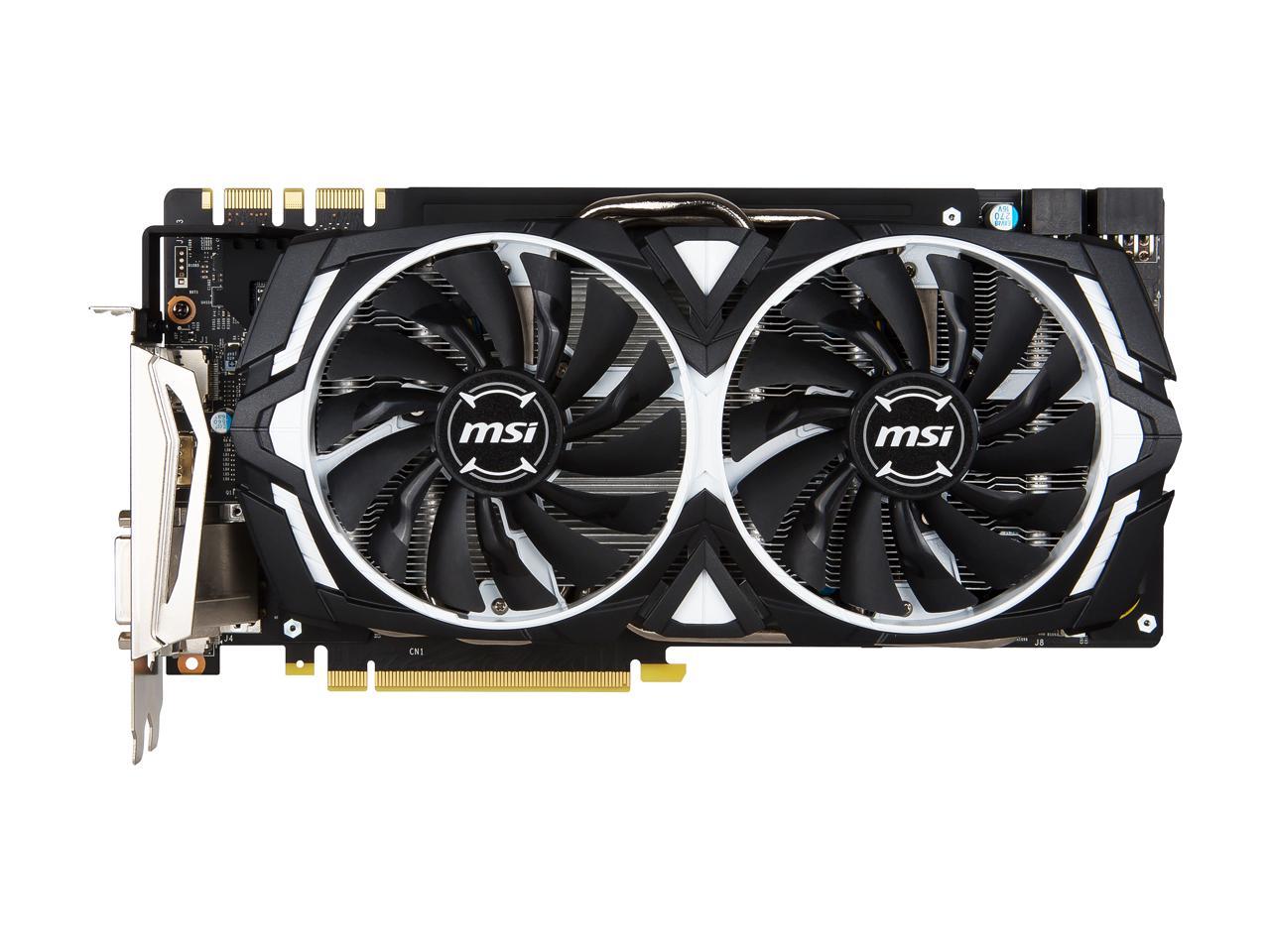 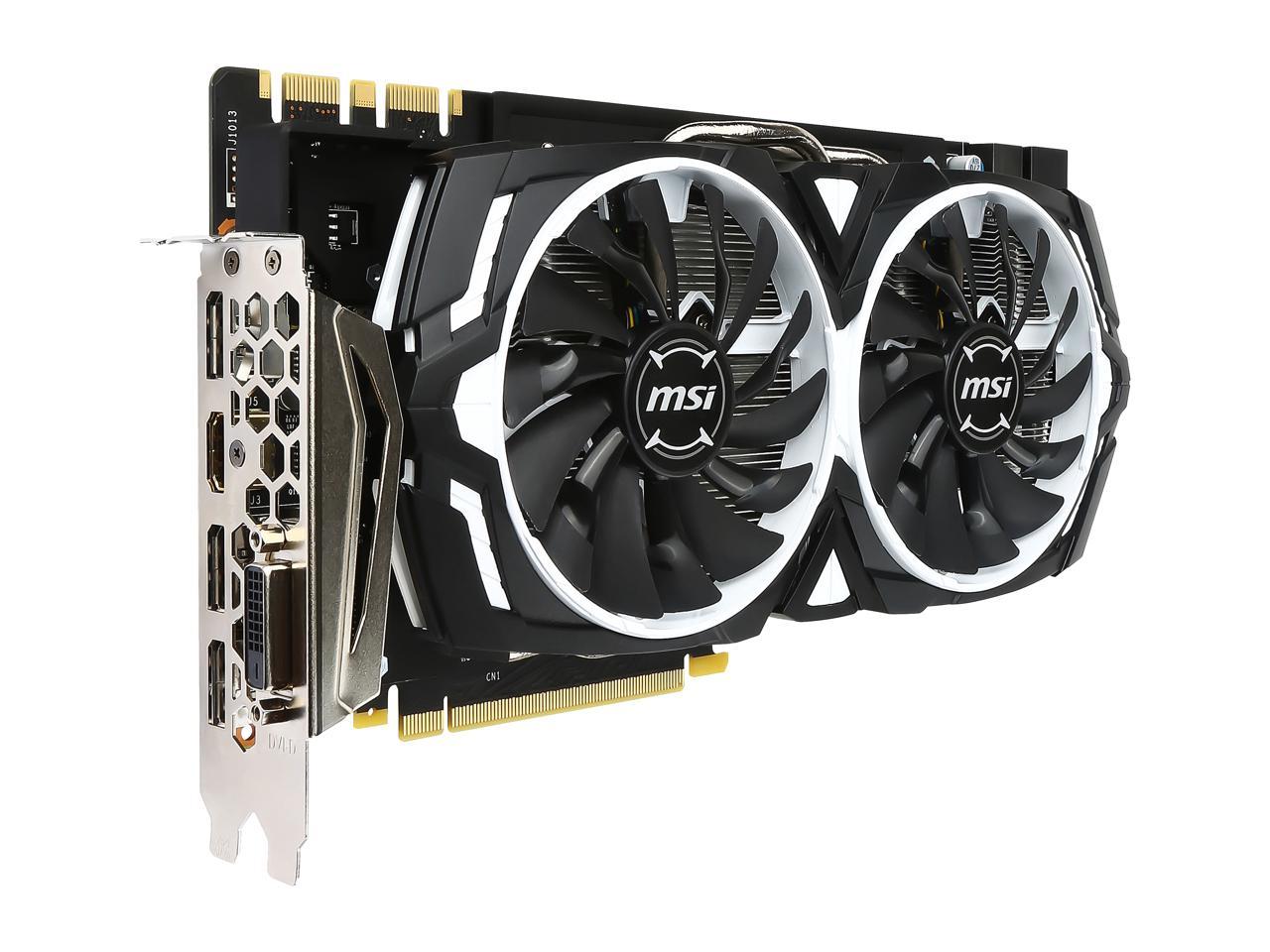 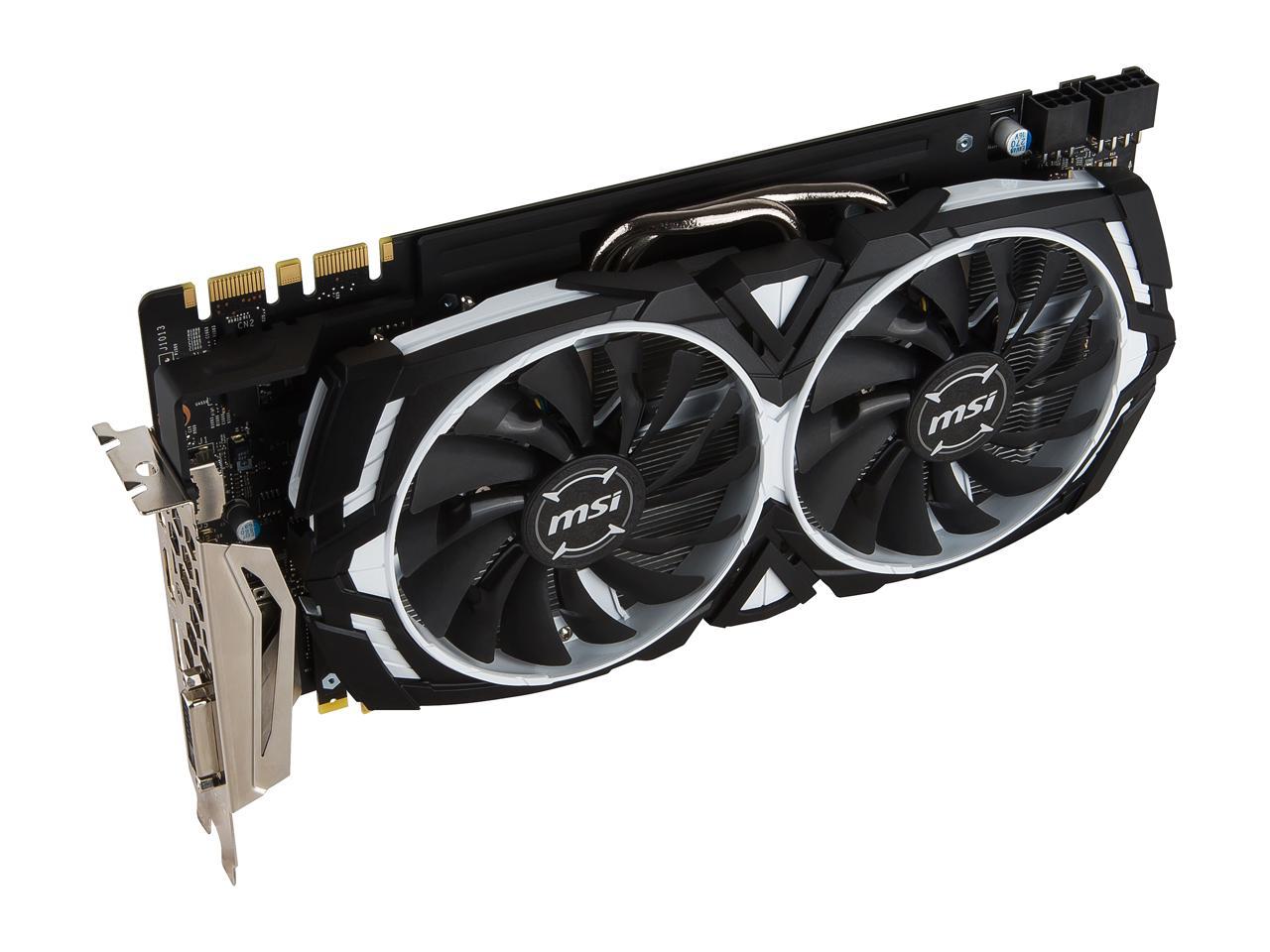 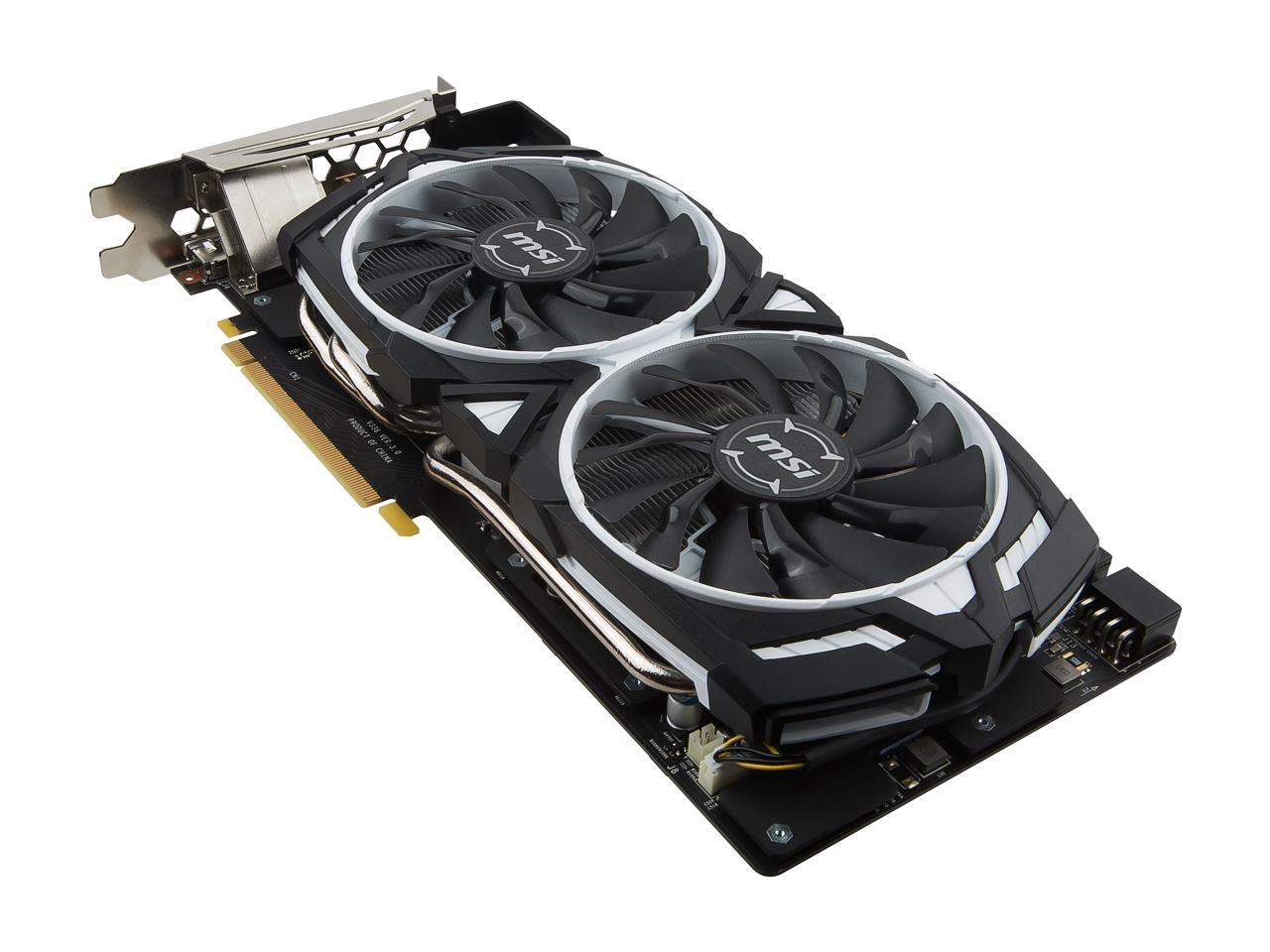 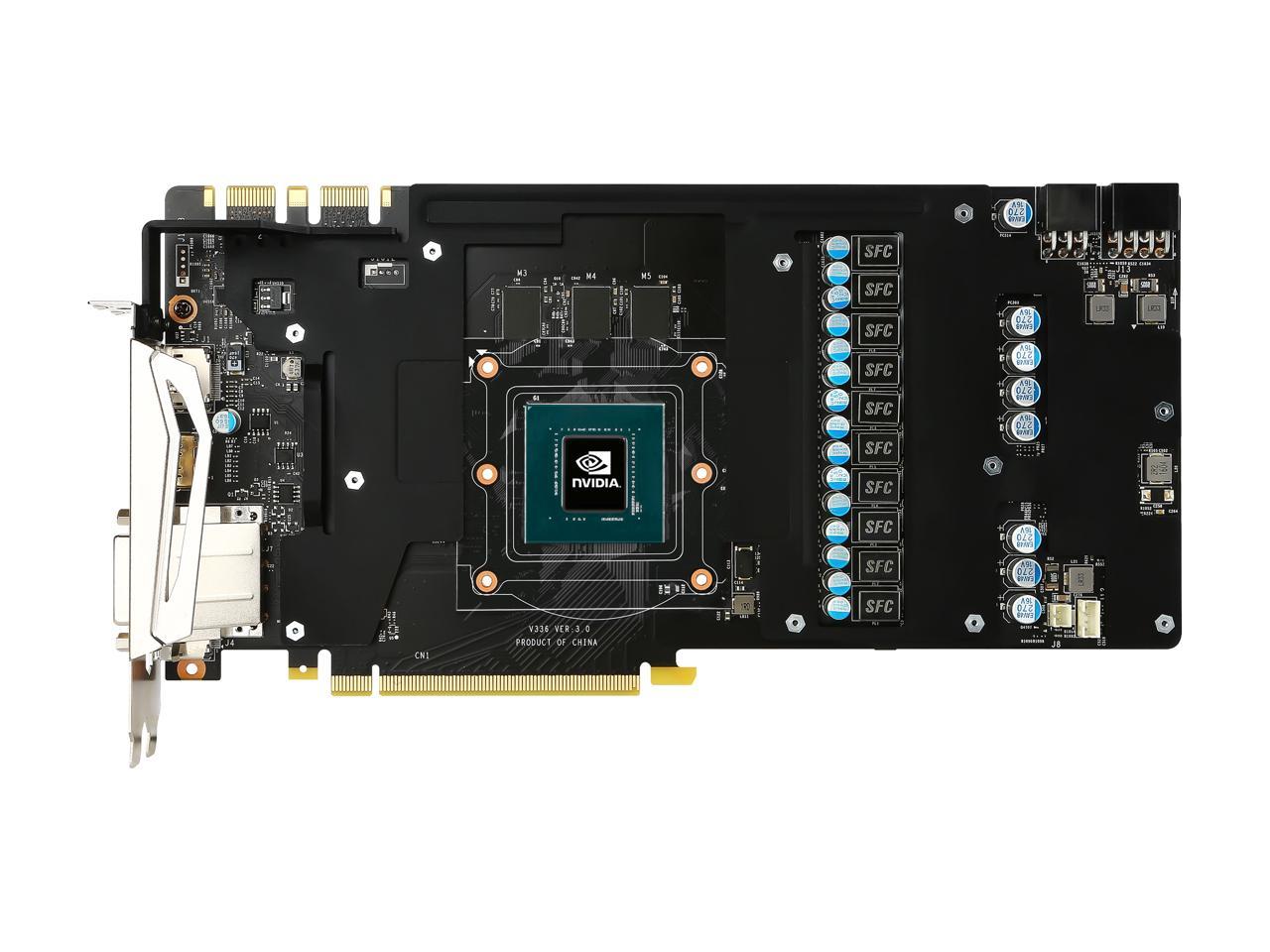 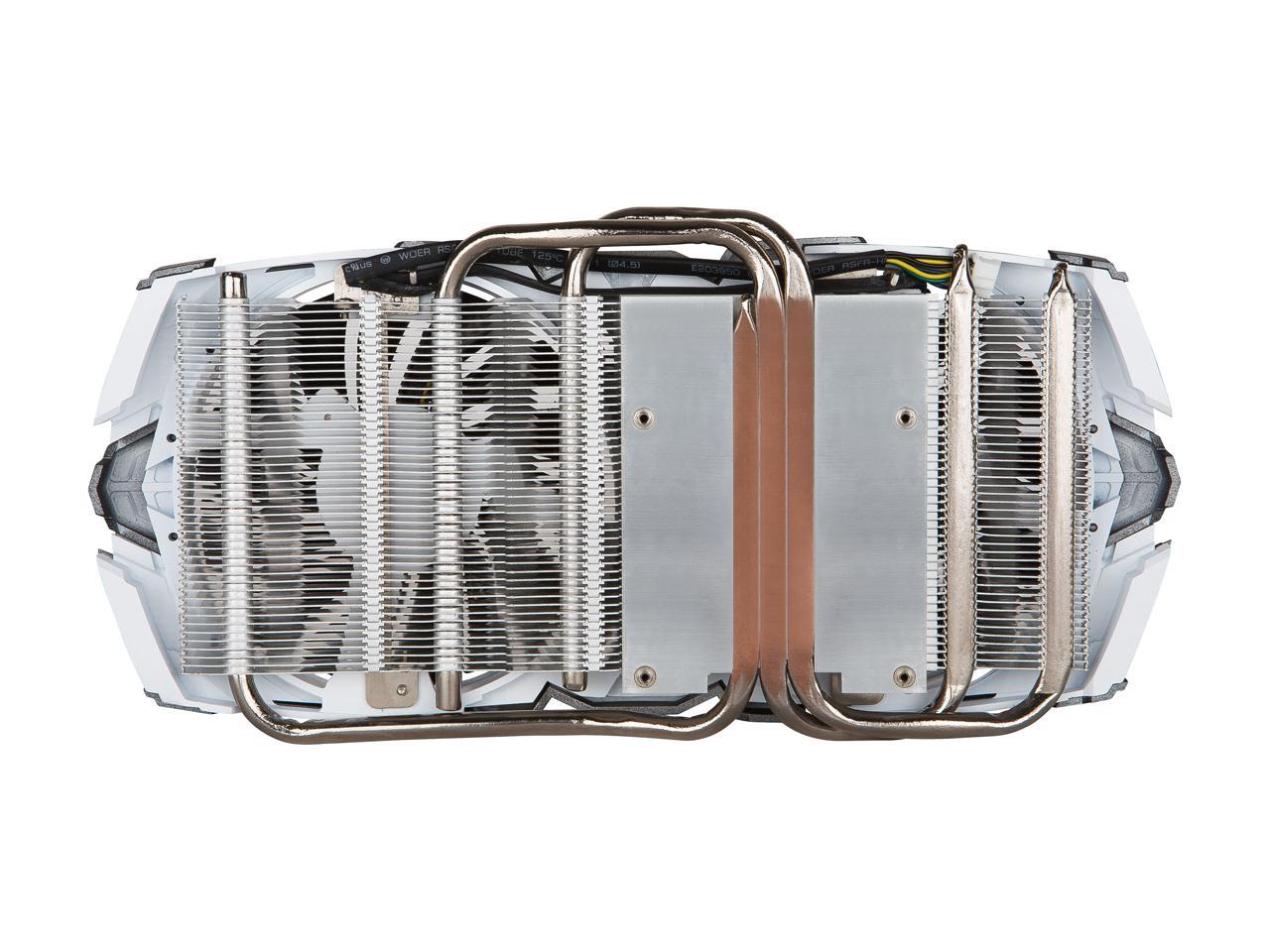 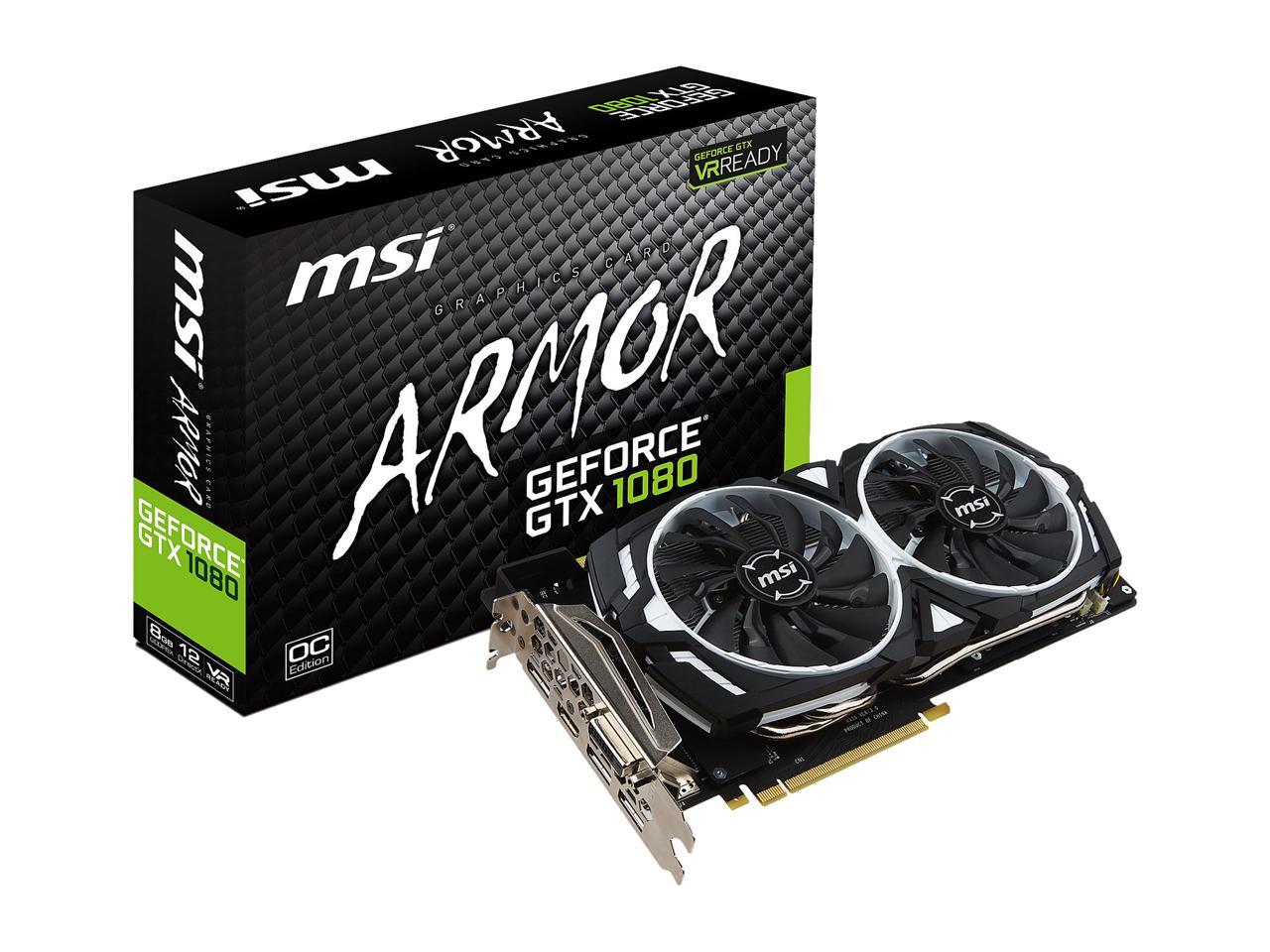 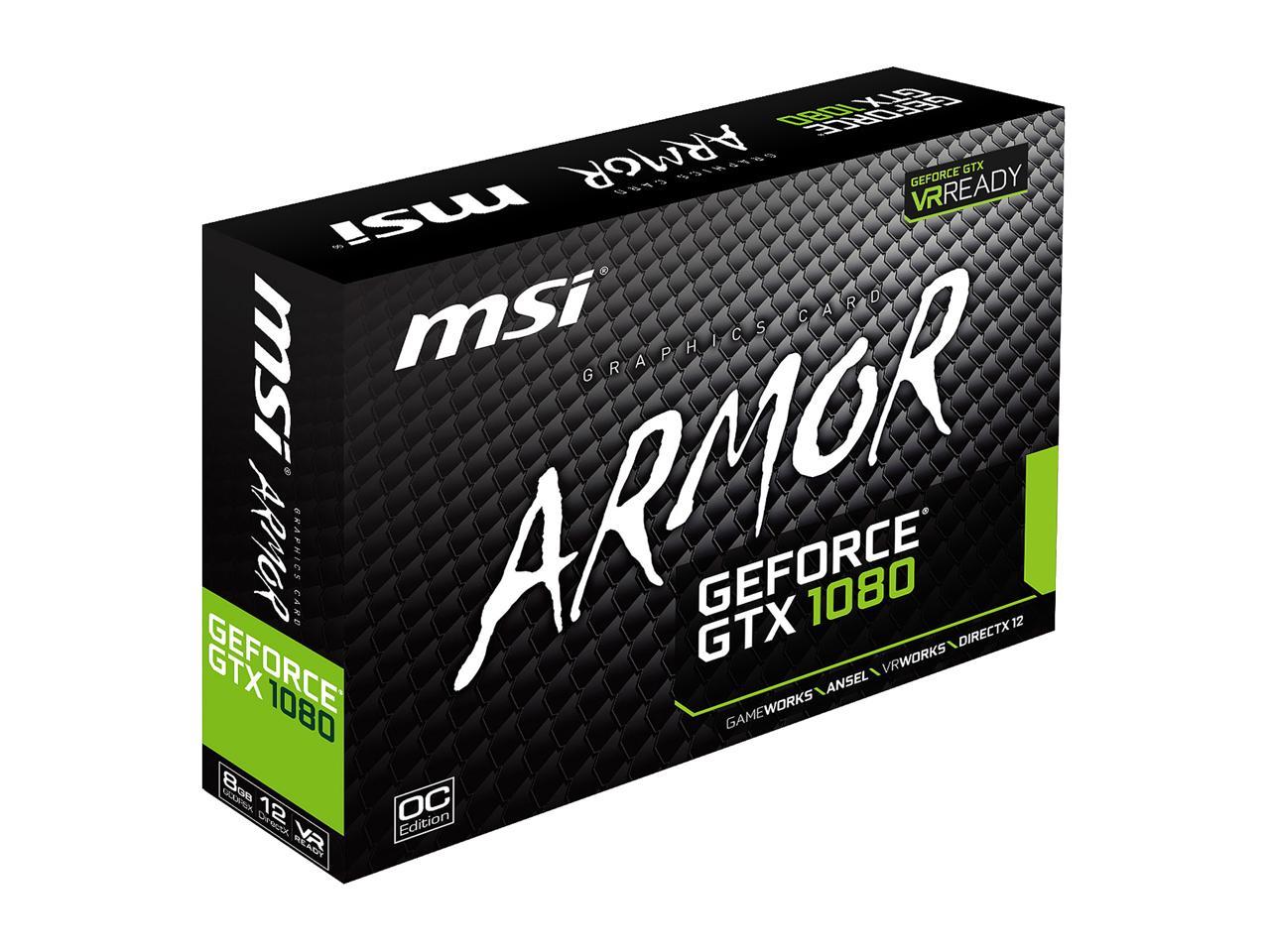 THE ULTIMATE GRAPHICS FOR VIRTUAL REALITY

NVIDIA's unique set of features ensure you get the right level of performance, image quality, and latency to ensure your VR experience is nothing short of amazing

The easiest way to update your drivers, optimize your games, and share your victories

Synchronizes the display refresh to your GeForce GTX GPU for the fast, smooth gaming

Game in style & dare to be different with MSI's unique ARMOR graphics cards. Inspired by advanced armor shielding with a classy black & white finish. ARMOR graphics cards are perfect for gamers and case modders who are looking for something different. This is where gaming meets class. Traditional Fan Blade
Maximizes downwards airflow and air dispersion to the massive heat sink below them.

Under the classy shroud and powerful dual fans is a huge heatsink with countless aluminum fins that help dissipate the heat from the GPU. The copper heatpipes are infused in the base plate to ensure efficient cooling. The aluminum fins are rigged with Airflow Control technology to maximize airflow towards the heatpipes.

The smoothest, fastest and most exciting gaming experience ever by eliminating screen tearing, display stutter and input lag.

Pros: - I actually got one. - Very quiet cooler. Large fans that peak at 2311 RPM at 100% according to MSI Afterburner. I have a quiet PC and I never hear the video card (for reference, the loudest components in my PC are my front Silverstone AP182s which I keep at around 1000 RPM). - Runs fairly cool stock, peaking at right around 70c with a quiet fan profile in a Corsair Carbide Air 540 (with dual Silverstone AP182s in the front). Still not as cool as an overclocked MSI GTX 980 Ti Lightning with a more modest profile and maxed out voltage, which goes to show how good MSI's Lightning cooler is! - Custom PCB (same as the GAMING X from what I understand) with more than one power connector and best of all, no coil whine. - Boosts to 1949 MHz out of the box. - Reliably overclocked to around 2088 MHz boost with 11016 MHz effective memory (+60mV voltage, +121% power limit which is max). - Noticeably outperforms my MSI GTX 980 Ti Lightning which I ran at 1488 MHz core. Especially when overclocked, big gains in certain games especially Fallout 4. Now, with some of the nicest mods, I get a constant 65-75 FPS on max detail even in the most demanding areas in Fallout 4 (and even during combat).

Cons: - Small heatsink, not a great cooler even though it's quiet. Hits my temperature limit of 92c in 3DMark Fire strike, especially with +75-100 voltage. This doesn't stop it from besting my old 980 Ti Lightning or a GTX 980 SLI setup in that benchmark though. - Aesthetics: The cooler looks nice albeit it's undersized, but no backplate and no lights. I ordered a custom backplate from V1 Tech as compensation. - Price. MSI had excellent competitive pricing last generation; the MSI GTX 980 GAMING 4G (which I also owned) hardly cost more than MSRP ($20 more I think?) For reference, the GTX 980 GAMING 4G is equivalent to the MSI GTX 1080 GAMING X, relative to its generation, and the GAMING X is $120 over MSRP. Furthermore, the ARMOR 8G OC costs the same as the EVGA FTW model which has customizable LEDs, a backplate, also has a custom PCB, and a bigger and presumably better cooler (my friend's EVGA GTX 1080 SC delivers lower temps in a case with less airflow, and with a less aggressive fan profile). So... not the best value GTX 1080 but not terrible either.

Overall Review: Before purchasing this, I had narrowed down my GTX 1080 choices to this model and the EVGA FTW (my preference, but no availability). The MSI GAMING X should be another great choice, perhaps even the best one right now, as it uses the same PCB as this (to my knowledge) but with a much better cooler. But I just couldn't support such price gouging. I wouldn't buy any other GTX 1080; Founder's throttles too easily (stock cooler not good enough) and has coil whine. Other non reference models either have a reputation for coil whine (Strix OC, though not extreme coil whine based on consensus), are overpriced (Strix OC), or have other issues (Xtreme Gaming center fan hitting the shroud). So do your research before buying a GTX 1080!

Pros: -Runs very quietly, cannot hear the card over case fans. (Even at 100% the fans are surprisingly quiet) -Runs cool, the card will boost up to 1900 MHz out of the box and hover around 68C -Will easily handle any of my games with max settings at 1440p -Great build quality, the white plastic has a nice glossy look to it

Cons: -No backplate, would be nice at this price to have a little extra protection and rigidity

Overall Review: This card is a great performer and runs very smoothly. The lack of a backplate might turn some away, but I personally couldn't care less. I like the look of the PCB anyway. To each his own.

Pros: Fans don't turn on unless the card is at load which is amazing. Overkill for 1080p and does 4k beautifully on most titles. It's a beautiful design, sleek with a nice black and white contrast. Best part is...you can't hear it! It does overclock fairly well but I have yet to push it to its limits.

Cons: As stated before, no backplate. It seems the backplate thing is an issue for many but personally it doesn't bother me. Also it has no LED lights for those who like that kind of thing. These cons are for future buyer reference and really don't bother me at all.

Overall Review: I back ordered this card thinking that it was impossible for me to actually get it shipped. I humored myself by clicking back order... Sure enough, two days later it started packaging. Although this came as a surprise, I don't regret this buy one bit!

Pros: This card is great and runs all the games i was giving it no problem. Ran Witcher 3 on Ultra settings with hairworks on and was always capped out on fps which was fantastic.

Overall Review: I sadly lost the chip lottery on mine and it was working for about a 1 1/2 weeks before it started to artifact heavily which I cant fault neither MSI or newegg but the rma for newegg was amazing and the turn around was incredibly quick. I would suggest this card to others even with my own personal problem.

Pros: A viable single card solution for 4k@60Hz gaming. Runs GTA V on ultra, peaking at 71 degrees during several hours of 4k gaming. Fan noise is not noticeable, even at full load. Low power requirements are nice for anyone switching from older cards.

Overall Review: Personally, I would prefer more HDMI 2.0 and less displayports; two of each would have been a nice compromise. Do not pay extra for the pretty backplate, unless you have plans for your rig to appear in a Lil Wayne music video.

Cons: - as everyone else has said, there's no backplate. This card is not too heavy, but it does sag about 5mm. It's not a big deal functionally, but it just makes me worry when I see it.

Overall Review: This is a fantastic card and I highly recommend it. It's not as expensive as the "Flagship" cards, but delivers all the same performance and features, not to mention, it looks awesome.

Pros: So i picked this card up originally because it was in stock. Since then I have recieved 2 gaming X 1080s as well but this card actually overclocks better than both of them. Total beast. It stays a few degrees cooler as well, im guessing because it doesnt have a backplate. Dont get me wrong, the backplate on the gamingX is beautiful but ill take performance any day.

Cons: Low stock all the time.

Overall Review: I have dialed in a 2111mhz core clock on this with +400 mhz on the memory stable as stable can be. Results in about a 5% increase in fps over stock which means a lot when you are looking for 60 fps at 4k or when you want high as possible refresh at 1440.

Pros: Very fast Overclocks well GPU boost pushes this card stock to nearly 2000Mhz Quiet even at full blast Color neutral Black PCB and no distracting RGB lighting Stays cool despite the underpowered cooling shroud (65C max at full load with 2050Mhz OC) Strangely enough it does not belt out heat at full load like my 970 used to.

Cons: Extremely low power limit (104%) Only one HDMI port (standard for 1080s but still a con especially for those with VR headsets)

Overall Review: This is the MSI Gaming G1 PCB with a GTX 1070 Cooling Shroud. If you intend to go with watercooling it's basically a cheaper Gaming G1 card and the best value to be found in the 1080 series. The 1070 cooler works well enough for the 1080 but DO NOT get the 1080 Ti armor, it throttles like crazy and is possibly the slowest 1080 Ti on the market. This card is HUGE. It dwarfs my old 970. Has a significant amount of GPU sag so be ready to address that or deal with the additional stress on the PCI-E slot.

4 out of 4 people found this review helpful. Did you?
Manufacturer Response:
Dear Valued Customer, Thank you for sharing your experience with the MSI product! If you ever require technical assistance, please feel free to contact our technical support department directly at 626.271.1004 from M to F, 9am to 6pm Pacific Standard Time. Thanks for choosing MSI! Best Regards, MSI Review Team