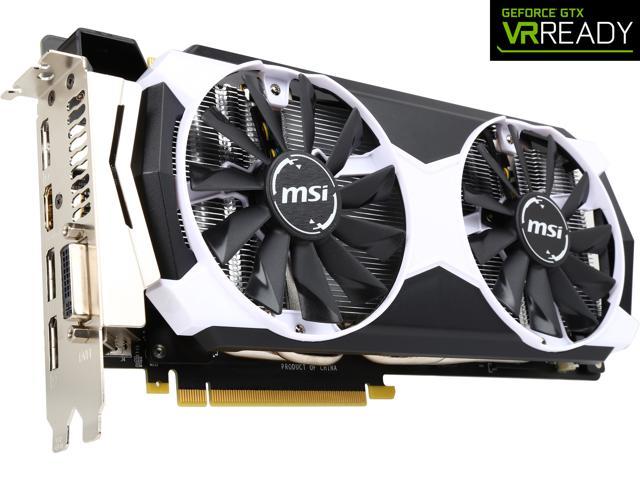 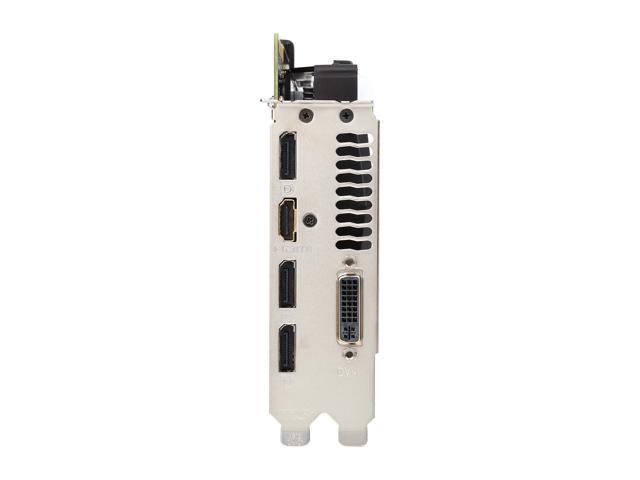 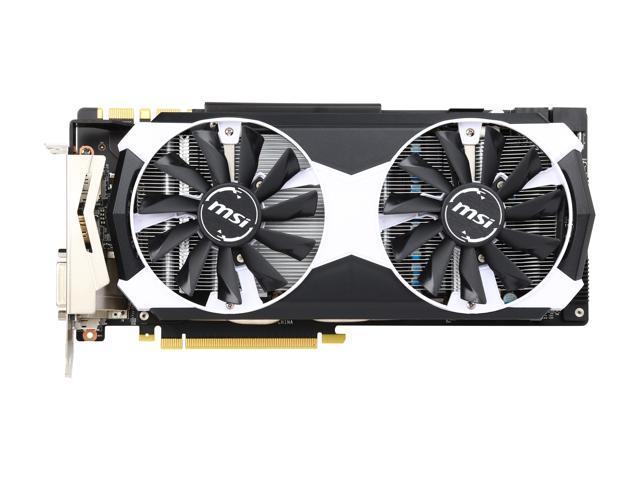 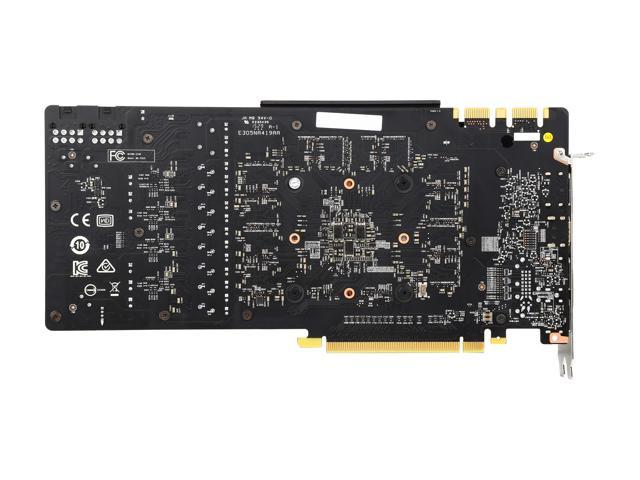 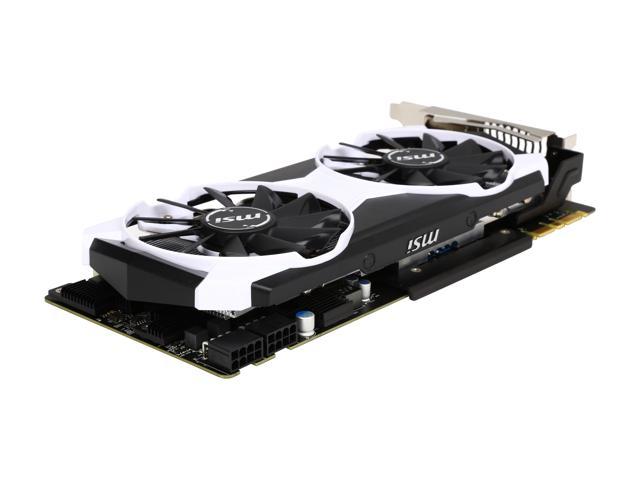 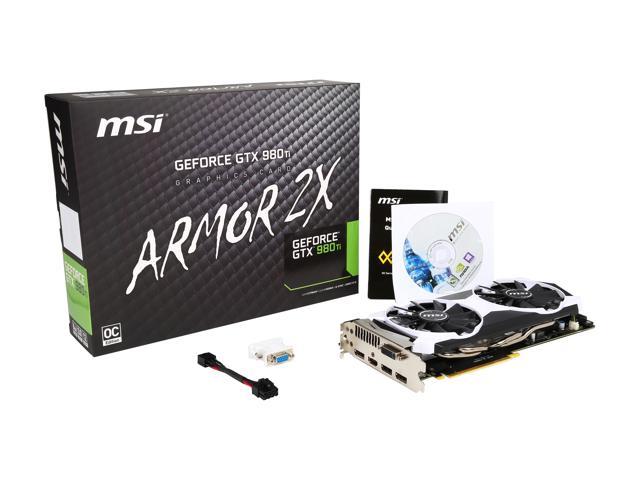 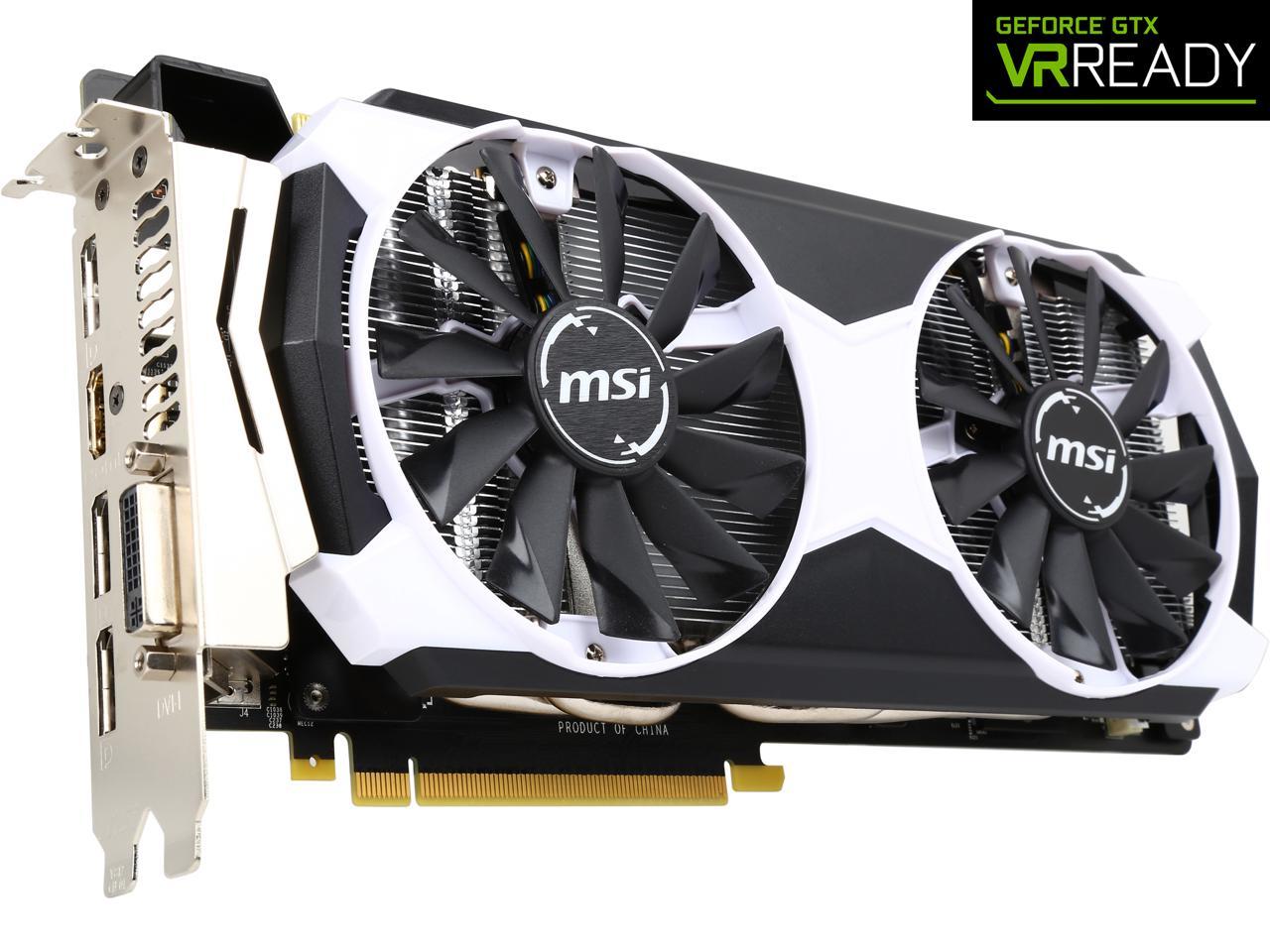 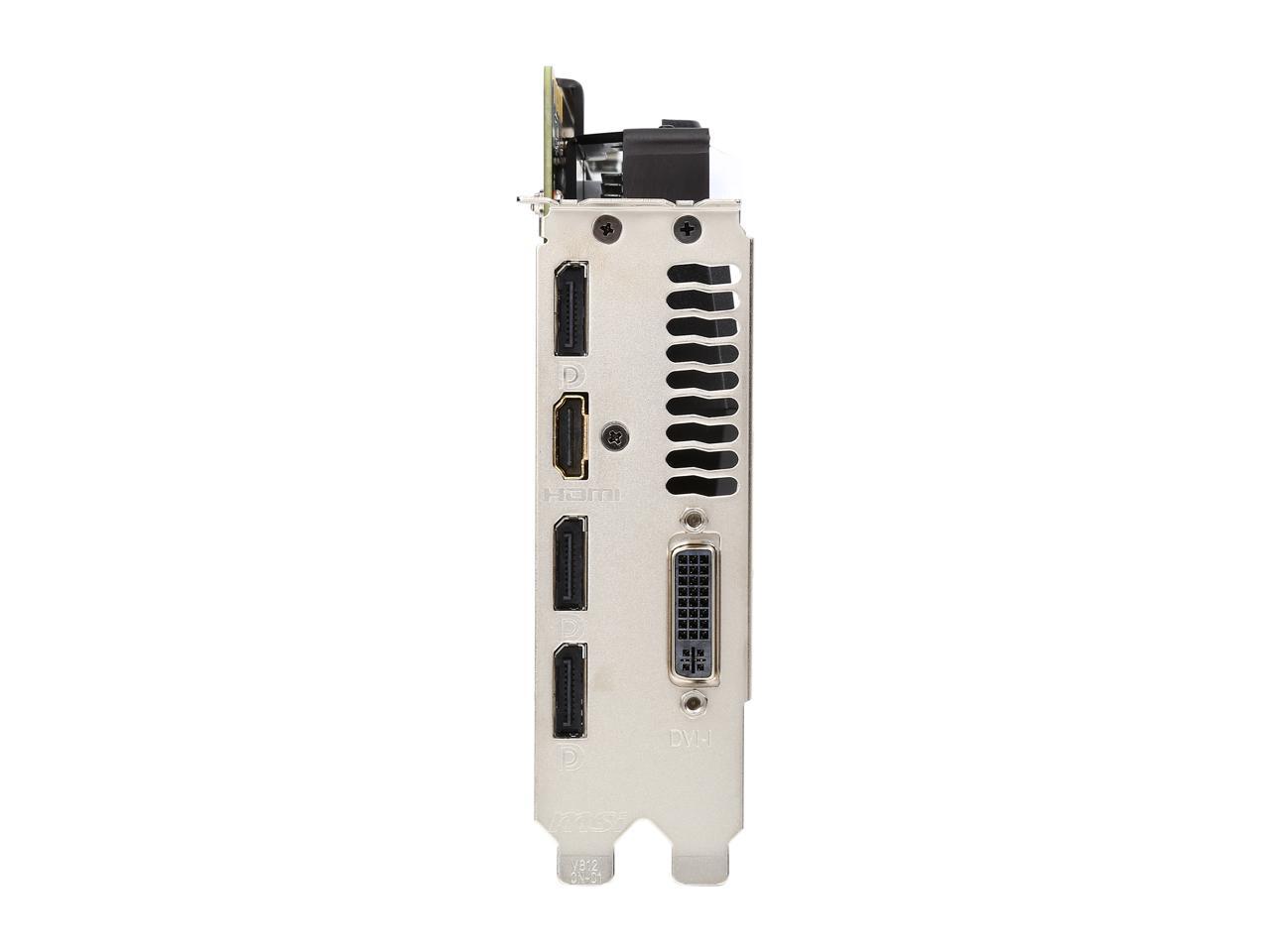 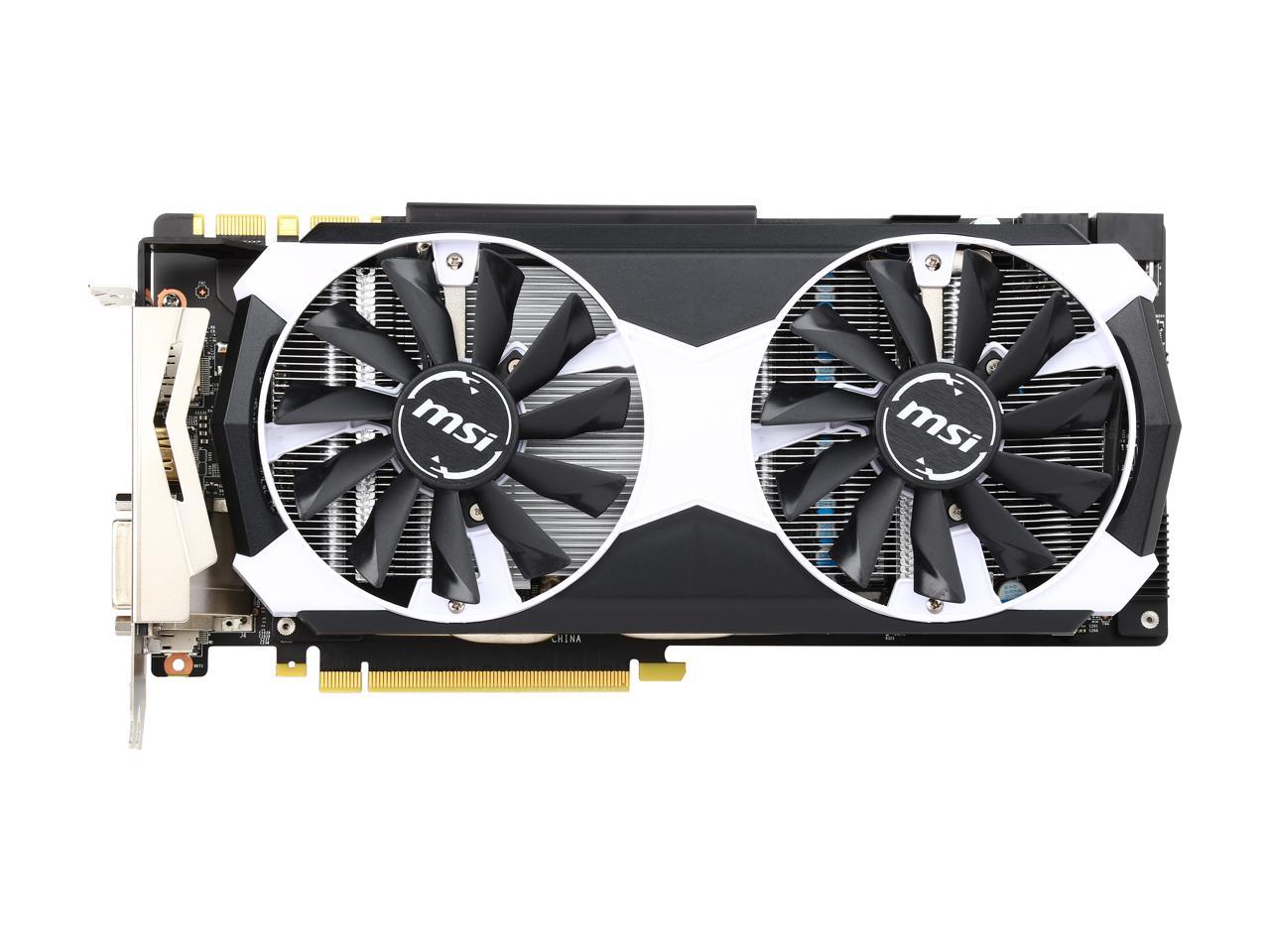 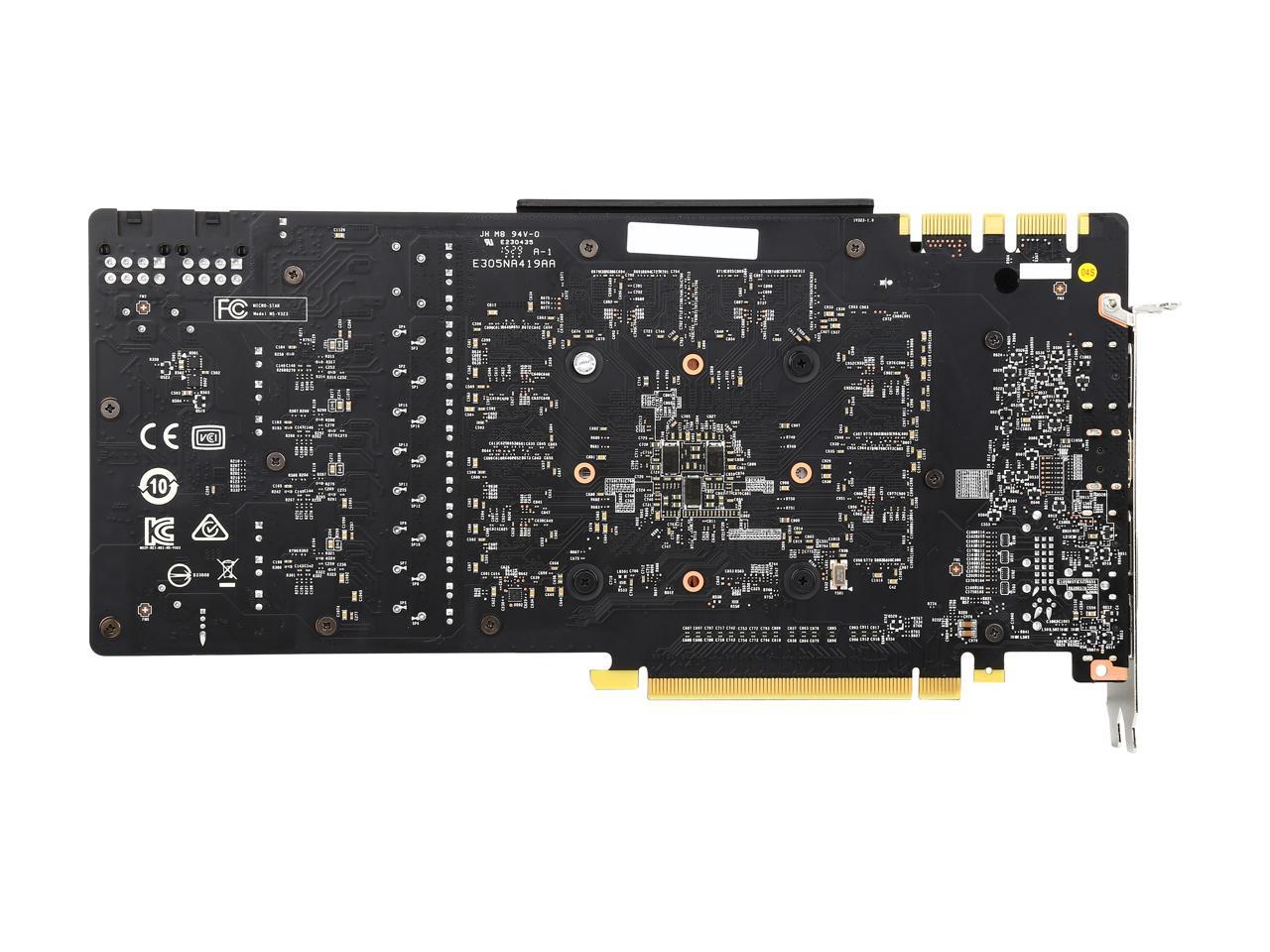 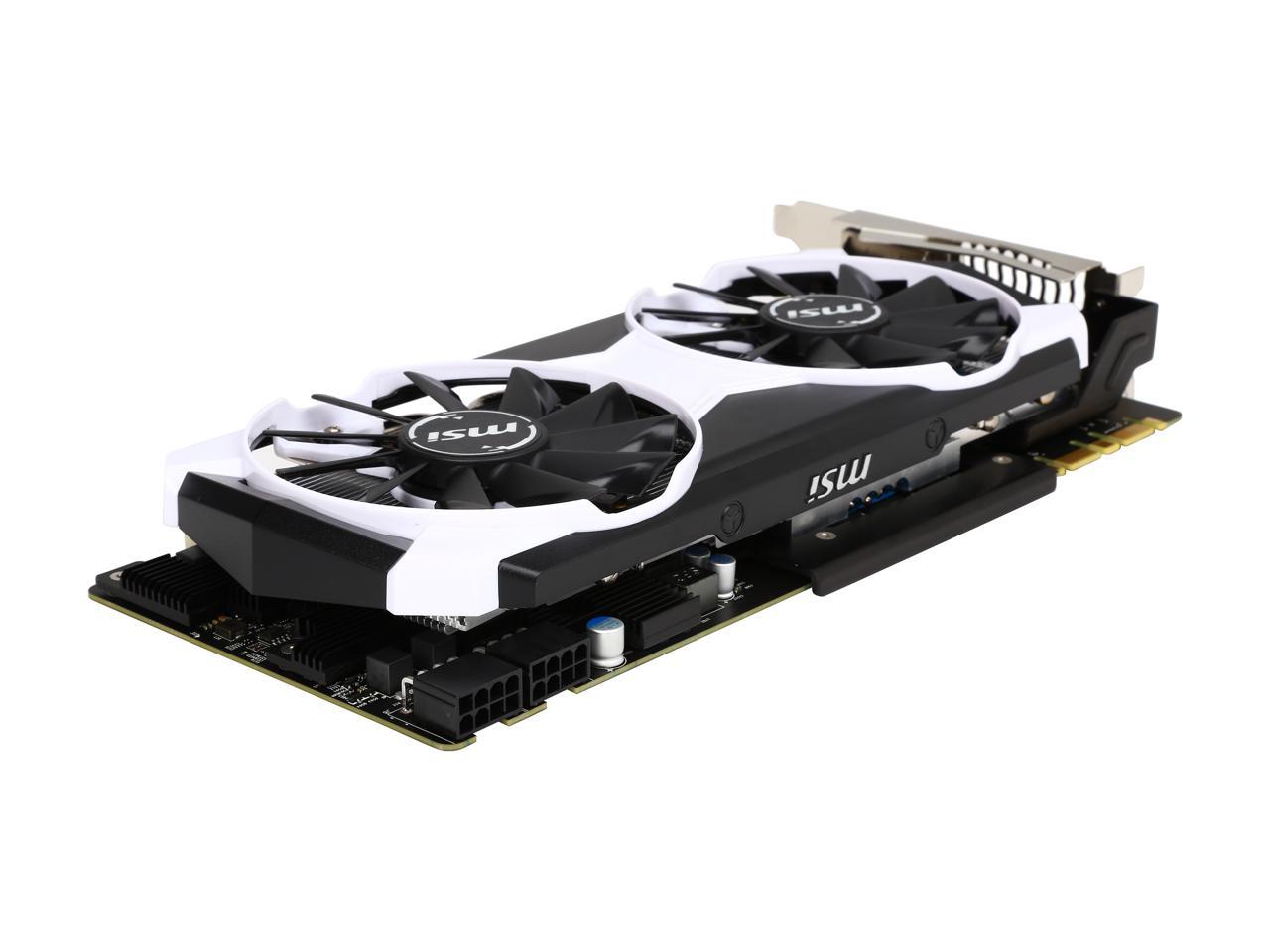 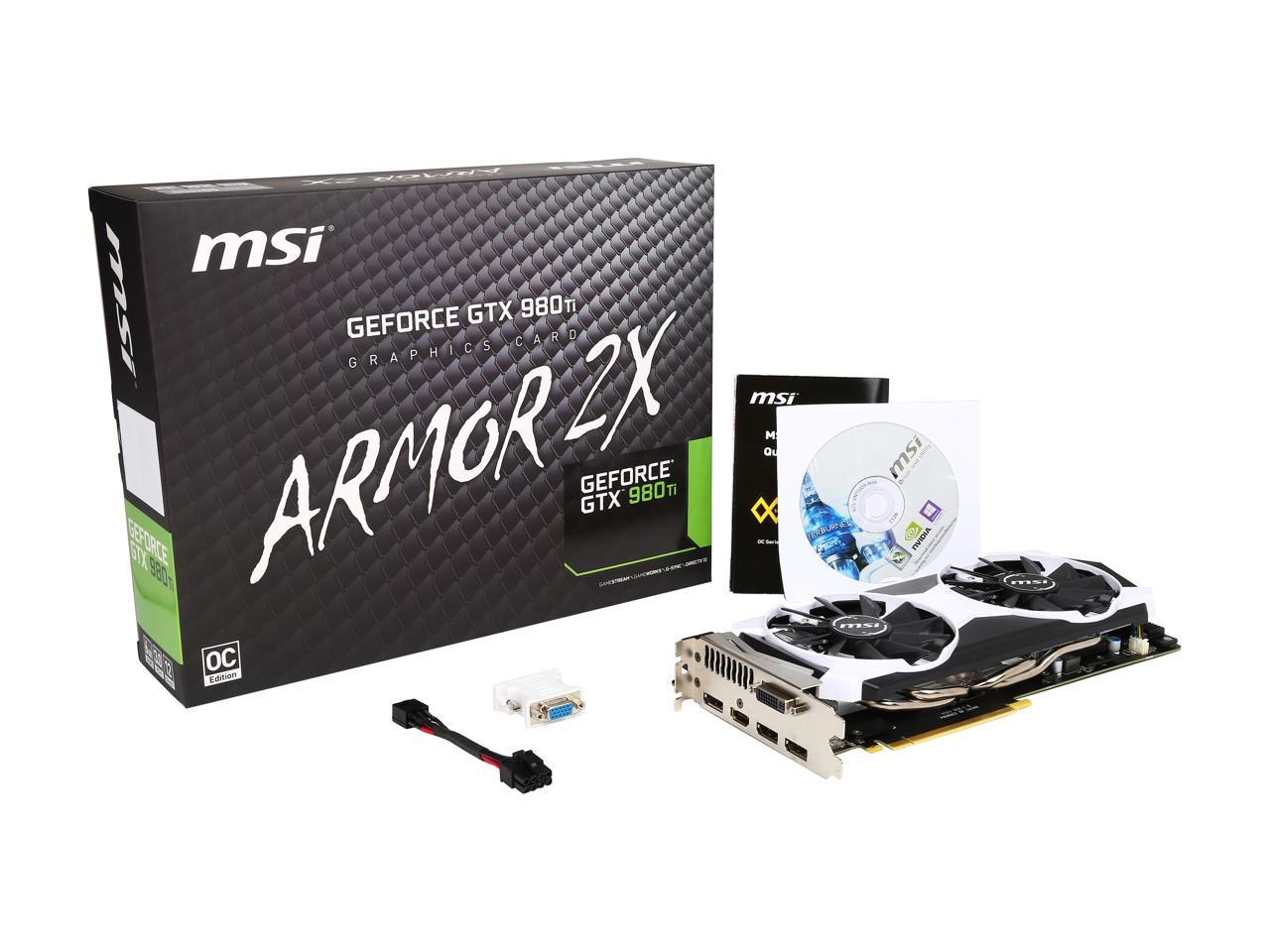 (38) Write a Review
OUT OF STOCK.
Overview
Specs
Reviews

The MSI GTX 980Ti 6GD5T OC is the new flagship graphics card engineered and optimized for 4K gaming. It's based on the state-of-the-art new generation NVIDIA Maxwell architecture, and features 2816 CUDA Cores and gigantic 6GB, 384-bit GDDR5 memory. It delivers unrivalled graphics performance to take on virtual reality (VR) and 4K gaming at high settings, while also being acoustic-, thermal- and power-efficient for an evolved gaming experience like never before. Highest-grade components and meticulous craftsmanship ensure unbeatable stability and reliability even in the heat of gaming.

Performance is just part of the story. The new Maxwell architecture is engineered with the new VXGI (Voxel Global Illumination) technology to solve some of the most complex lighting and graphics challenges in visual computing. Scenes are significantly more lifelike as light interacts more realistically in the game environment. Super Resolution technology lets you enjoy the detail and brilliance of 4K gaming even on 1080p displays. The G-Sync technology ensures smooth, tear-free images by synchronizing display frame rate to GPU (require displays that support G-Sync). An array of NVIDIA GTX technologies are also built in, like GPU Boost, NVIDIA 3D Vision, NVIDIA Surround, NVIDIA PhysX, and GeForce Experience. These technologies together provide the most immersive and competitive gaming experience possible.

Pros: This card absolutely crushes games at a high framerate playing at the highest settings in 1440p. The pre-installed backplate provides ample support for this large card, it doesn't sag at all, and this card is the cheapest 980 ti that comes with a backplate. The ~10% factory overclock makes it one of the fastest 980 tis on the market and also the cheapest. I'm not generally hung up on aesthetics but it's a very nice looking card. It would look right at home in a nice white case, some LED lighting, and other white/black components. MSI Advertises that they use "Military Grade" materials in their construction, and after having this card in hand I can definitely see they use quality materials. None of the components of the card feel flimsy or delicate.

Cons: Out of the box the card does run a little warm. I was hitting ~80C under load, and idling at around ~61C. The high idle temp is partly due to the way nVidia drivers handle multi-display setups. After using MSI Afterburner to setup a more aggressive fan profile, and bumping up my case airflow slightly brought temps down to ~30C while idle, ~50C while using the computer for non intensive tasks, and ~75C while under heavy load. So, not necessarily a con but because it's factory overclocked and because 980 ti's do tend to run a little warm you'll want to make sure your keeping good airflow in your case.

Overall Review: I've been an EVGA only customer for years now, and that company really hasn't ever disappointed me. Due to this price, MSI's growing reputation for quality, the decent factory OC, and most especially the price I can definitely say I'd easily recommend this card to anyone looking to push their gaming experience to the next level. System: CPU: Intel i5-4590 GPU: MSI Armor 2x gtx 980 ti RAM: 16gb(2x8gb) Kingston Hyper X Fury Mobo: Arock H97 Anniversary SSD: 500gb Samsung 850 EVO

Pros: -Can easily reach 1080p@144Hz and 4K@60Hz, with frames to spare. -GPU-bound (i.e. most) games are eaten up by this card. Fallout 4 runs 4K at 60-80 FPS with most settings maxed, and a few (notably shadows, as these are extreme FPS sinks) turned down to stay reliably above 60 FPS. It hits 99% utilization and I have to crank the fan speeds up to 100% for it to stay at 70C, but this makes it sound like a jet engine. Going down to 85% fan speed keeps temps around 80C, which is still within acceptable limits, and keeps sounds down to where it blends into the background with headphones on. -CPU-bound games like Planetside 2 can be easily maxed out on GPU-heavy settings (resolution, particles, effects) and run at 4K only hitting ~50-60% utilization. Your CPU will be the bottleneck here (mine being an i7 4790k@4.8GHz), so crank up GPU-intensive eye candy settings as high as they can go. Temperatures are at ~60C with fan speed at ~65%. Could probably bring the fan down to make it quieter and still be under 70C, but with headphones on, 65% fan speed isn't a bother.

Cons: -When the card hits 99% utilization, it gets very hot. Fans will have to be at least 85% to keep temperatures reeled in, which results in it being quite loud, especially at 100% fan speed. If having a quiet case is important, or even if you don't want your case to sound like a hurricane under heavy load, you'll need to pay extra for a card with better a better cooling solution. For being the cheapest 980 Ti, though, what it has is adequate.

Overall Review: Quick rundown on temperatures/sound, which are this card's major downsides: -Idles at 40C with fan at 65%, which puts it at a noticeable volume. Bringing fans down to a lower level has the card idle closer to 50C, which is a little high for an idle temp but worth it if you want to keep it quiet. You won't go under 40C idle unless you're fine with incredibly loud fans, relatively speaking. -Under load it can easily hit 100% fan speed at 99% utilization if you want to stay under 70C, and 85% fan speed to stay below 80C. It's still very loud at 85%, but becomes bearable. If you want a card that stays below 70C under 99% load at a decent volume, you'll have to pay extra for a different card with better cooling. For the price, performance is top notch. Heat is the major issue, but in many games you won't hit 99% utilization so it won't be much of an issue. This only comes into play when you run heavy settings at 4K resolution, and can still be kept in check with the cooler. If low sound level is important, get a different card with a better cooler.

Pros: This card is pure power, and has maxed every game I've thrown at it. The Afterburner software is intuitive and easy to use, and the card is (relatively) quiet, even at full load. After adjusting the fan profile (see cons) the card hits a max temp of approximately 78 degrees C. A perfectly acceptable temp. There is the slightest whine, but nothing uncommon in high performing cards like this, in fact this card is significantly quieter than others I've seen.

Cons: The default fan profile is absolute junk. The fan doesn't ramp past 70% speed until the card hits 70C. Which means your card is almost always running at 70C+, which is far too hot for idle temps. I ramped up the fan profile and now have idle temperatures of 30-35C, mid load temperatures of 55C and full load temps of 75-78C.

Overall Review: At the time I bought this card it was the least expensive 980ti (including reference). I was a little worried but the build is solid. You get great performance, factory OC and upgraded fans for a great price.

Pros: Went on sale during the Black Friday sales and (after an Amex offer was applied) was just around $500. Incredible price. Does as well as you'd think a 980 Ti would - all games look great and run at 60+ fps in 1440p.

Cons: Runs a bit hot at times. I just crank the fans. It can be loud, but my case has pretty good airflow and is quiet, so I actually don't hear all that much.

Overall Review: Fan profiles should be better. Just customize them and you're good.

Cons: Really hot, tops out at about 83 degrees Celsius it's a little to close for comfort considering these cards are supposed to shut down at about 92 degrees

Pros: Upgrading from a GTX790-4GB, the increased FPS and game play was immediately apparent. No noise issues to speak of as yet, a back frame/stiffener would be nice with a card this large, but installation was without issue.

Pros: Best price/performance ratio in the 980ti line up with the current sale. My card's ASIC quality is more than 71%

Cons: Back plate is not necessary but would be nice if included.

Overall Review: The main difference between this card and the "gaming" version of the MSI 980ti is the cooling design, everything else is pretty much identical. The card runs at about 80c max under heavy load. The Armor 2x fans are not particularly loud compared to the other cards that I have owned. In the end it's a choice of getting this card or paying $50-80 more for maybe 5-10% better cooling and a back plate.