OUT OF STOCK
Sold by: Newegg
Shipped by Newegg
This item is currently out of stock and it may or may not be restocked.
Out of Stock
Add To ListFound on 320 wish lists 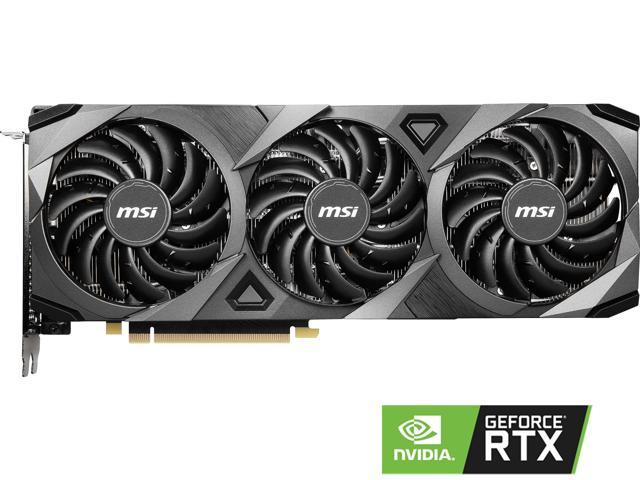 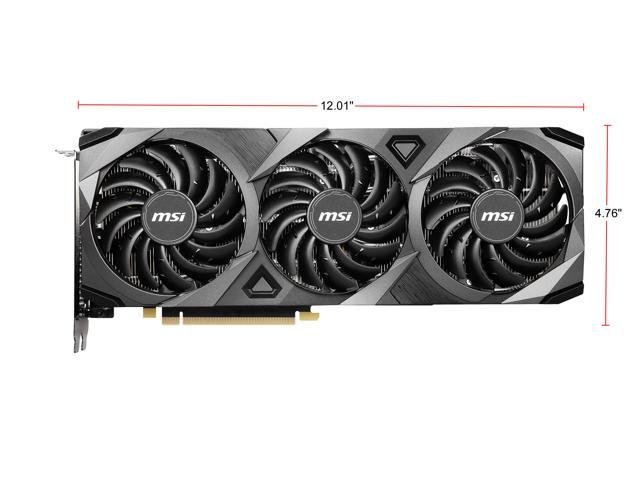 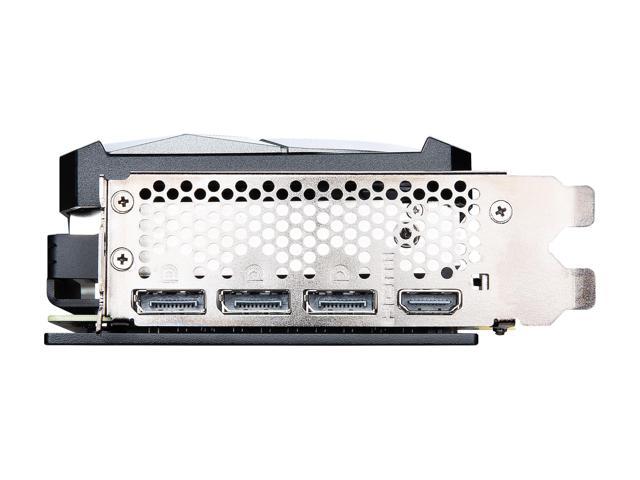 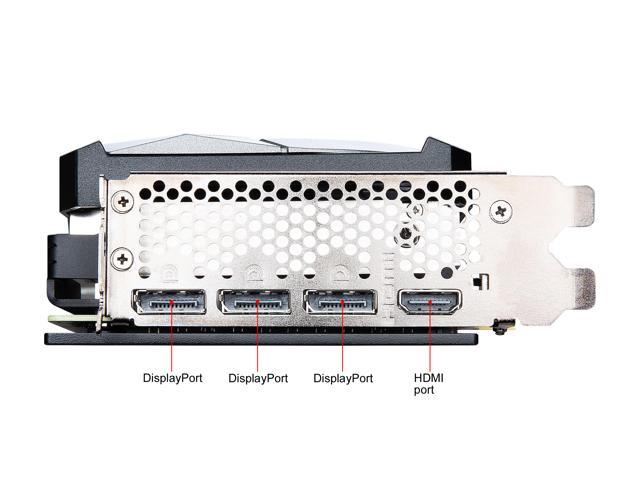 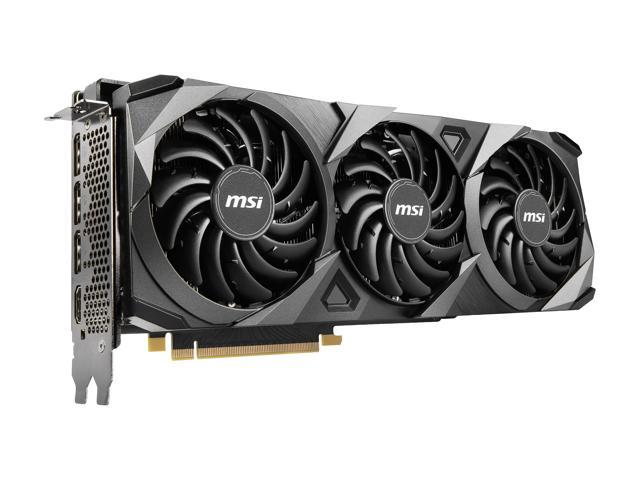 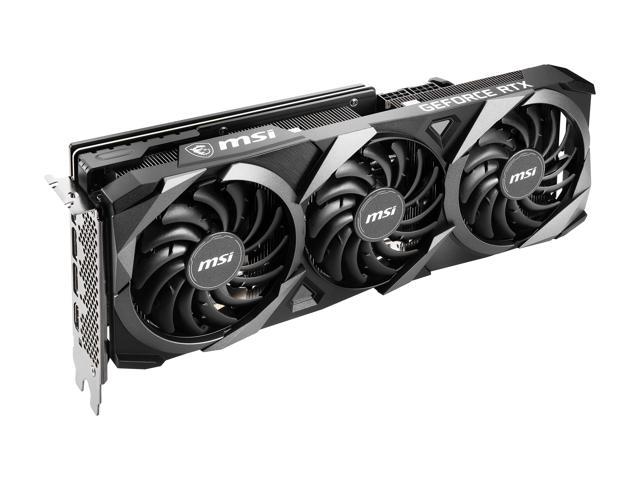 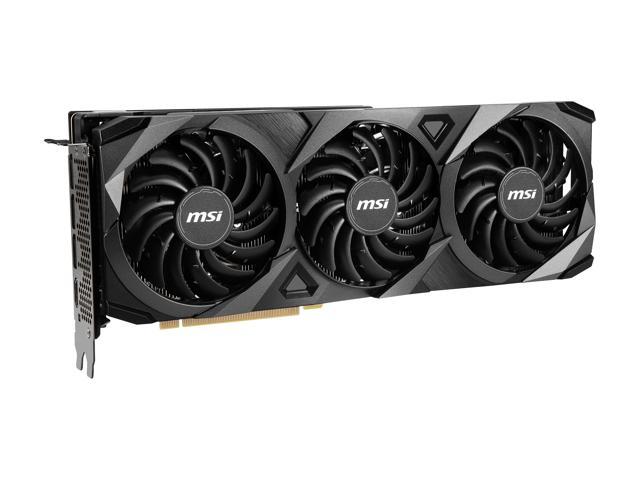 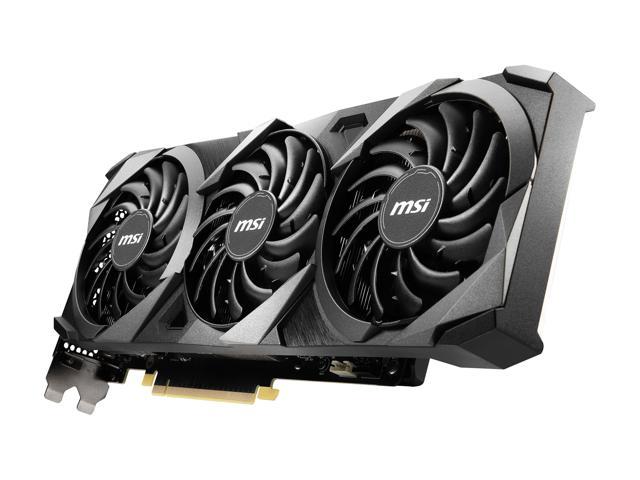 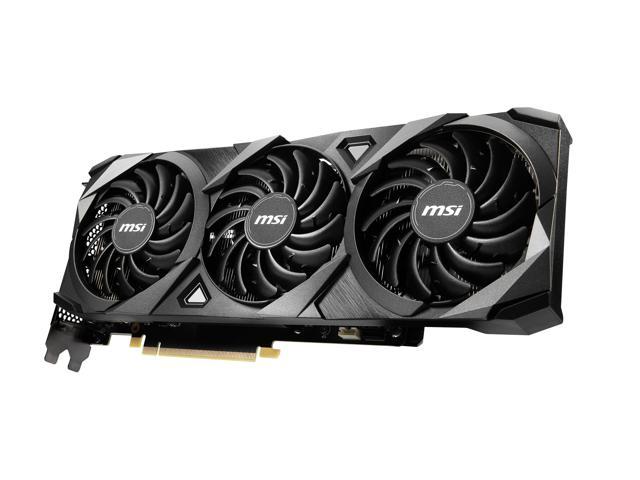 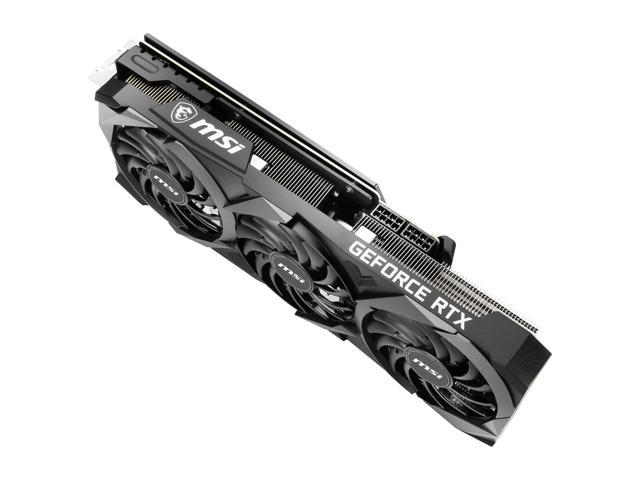 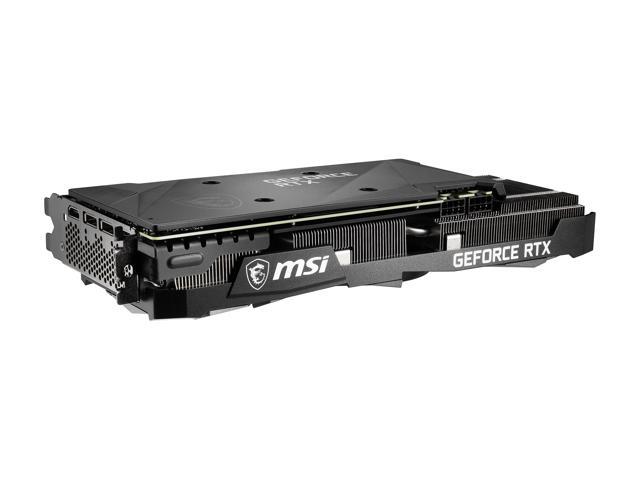 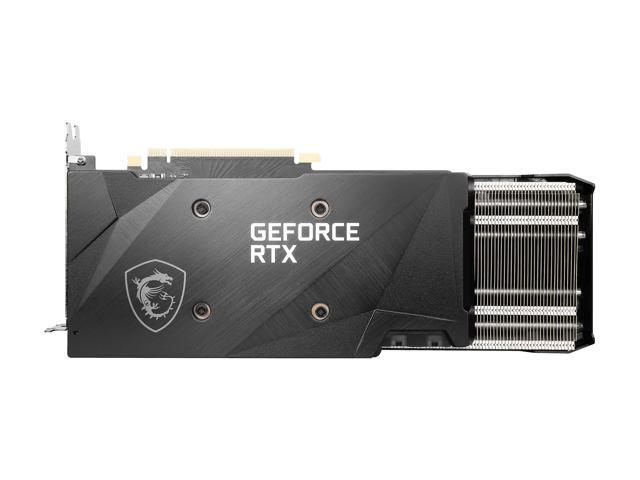 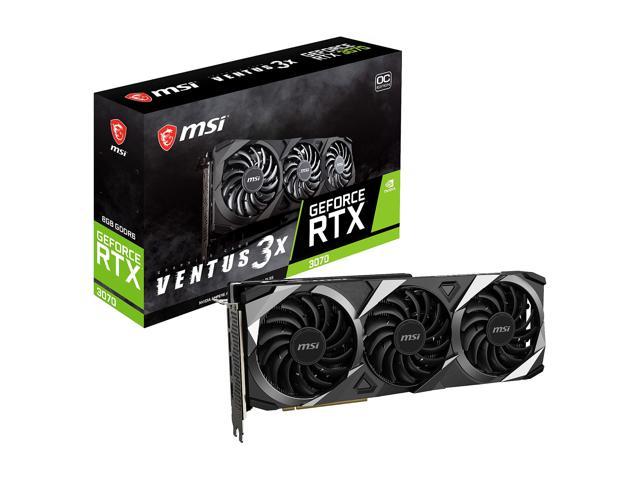 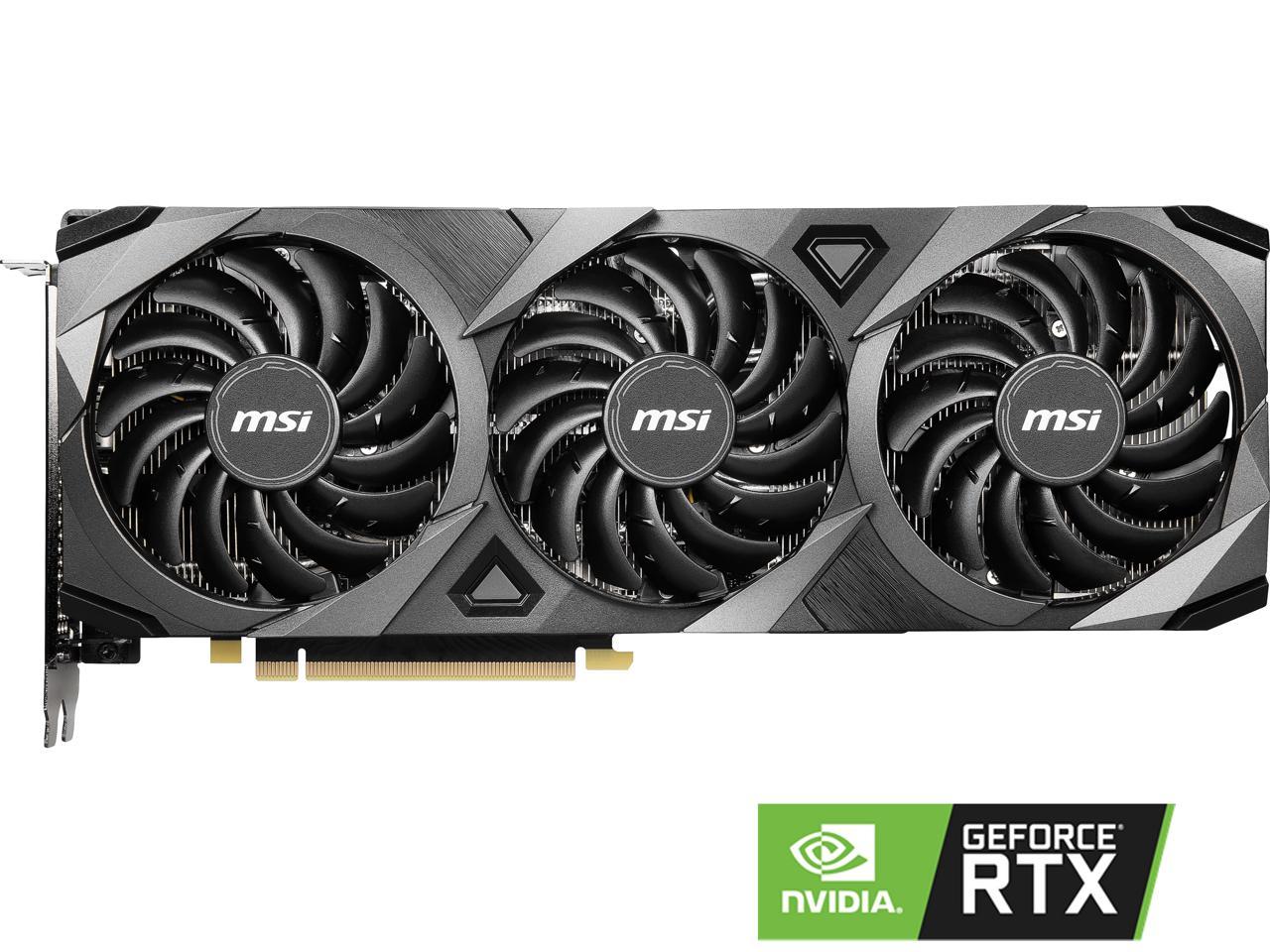 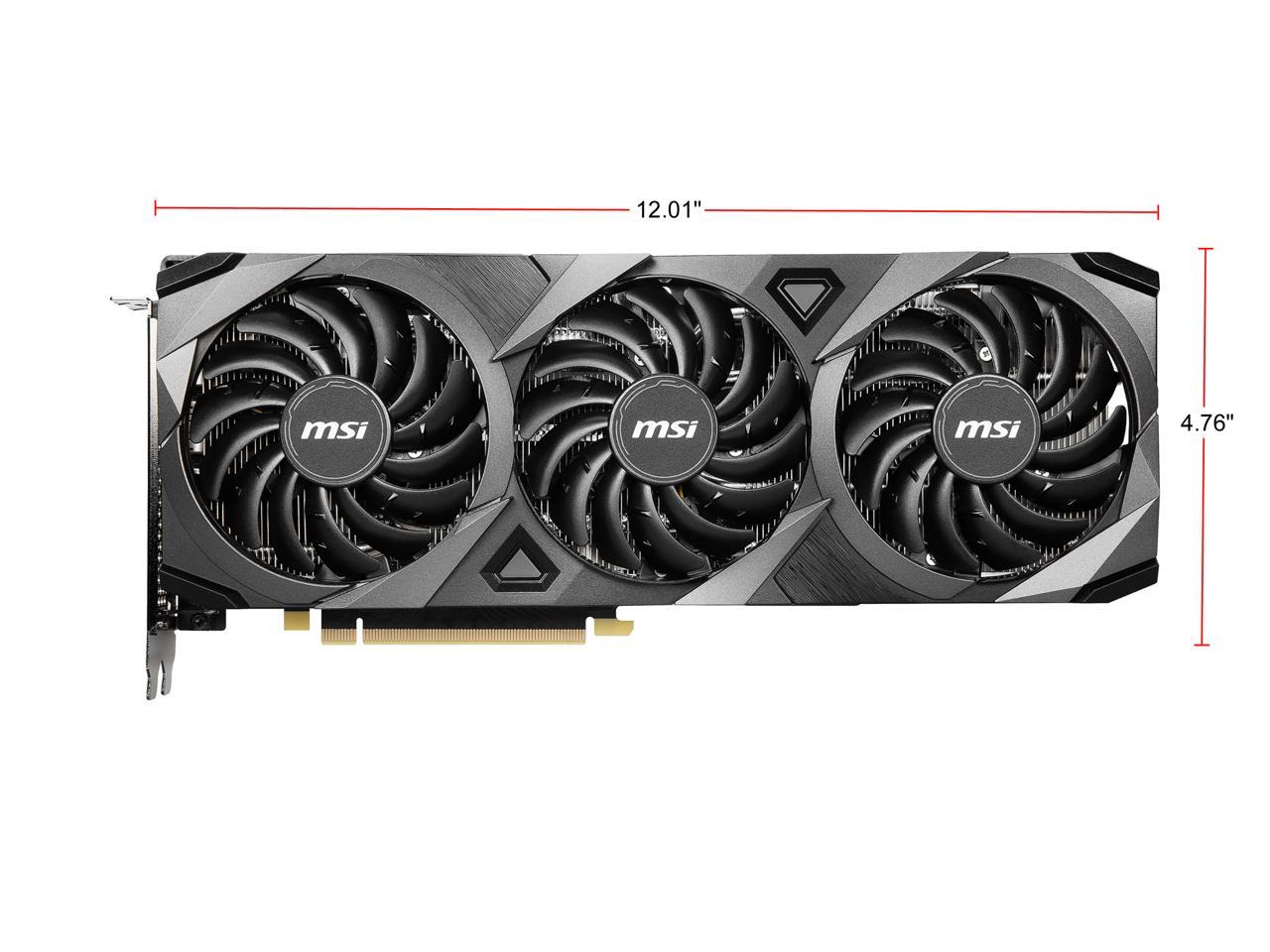 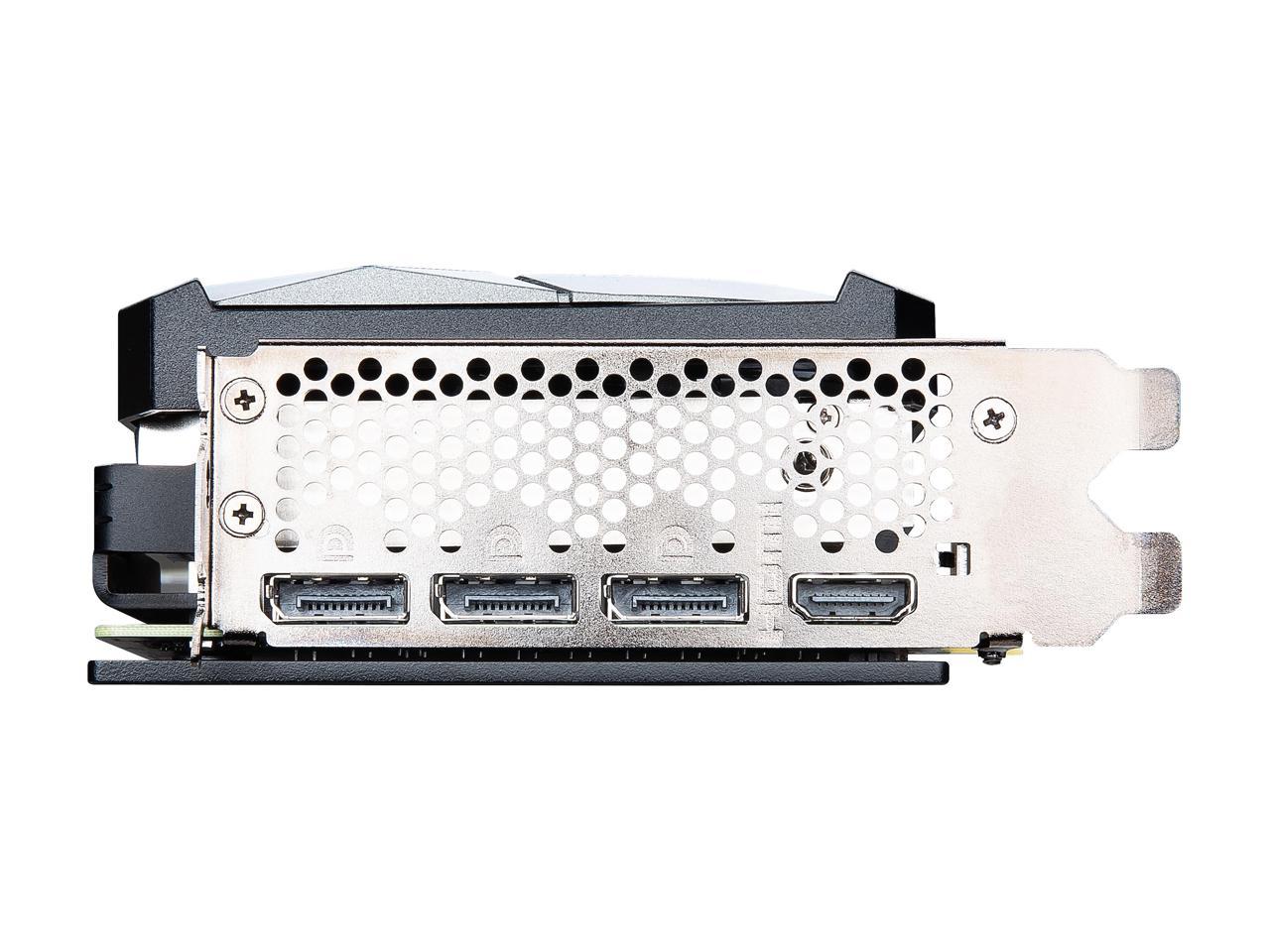 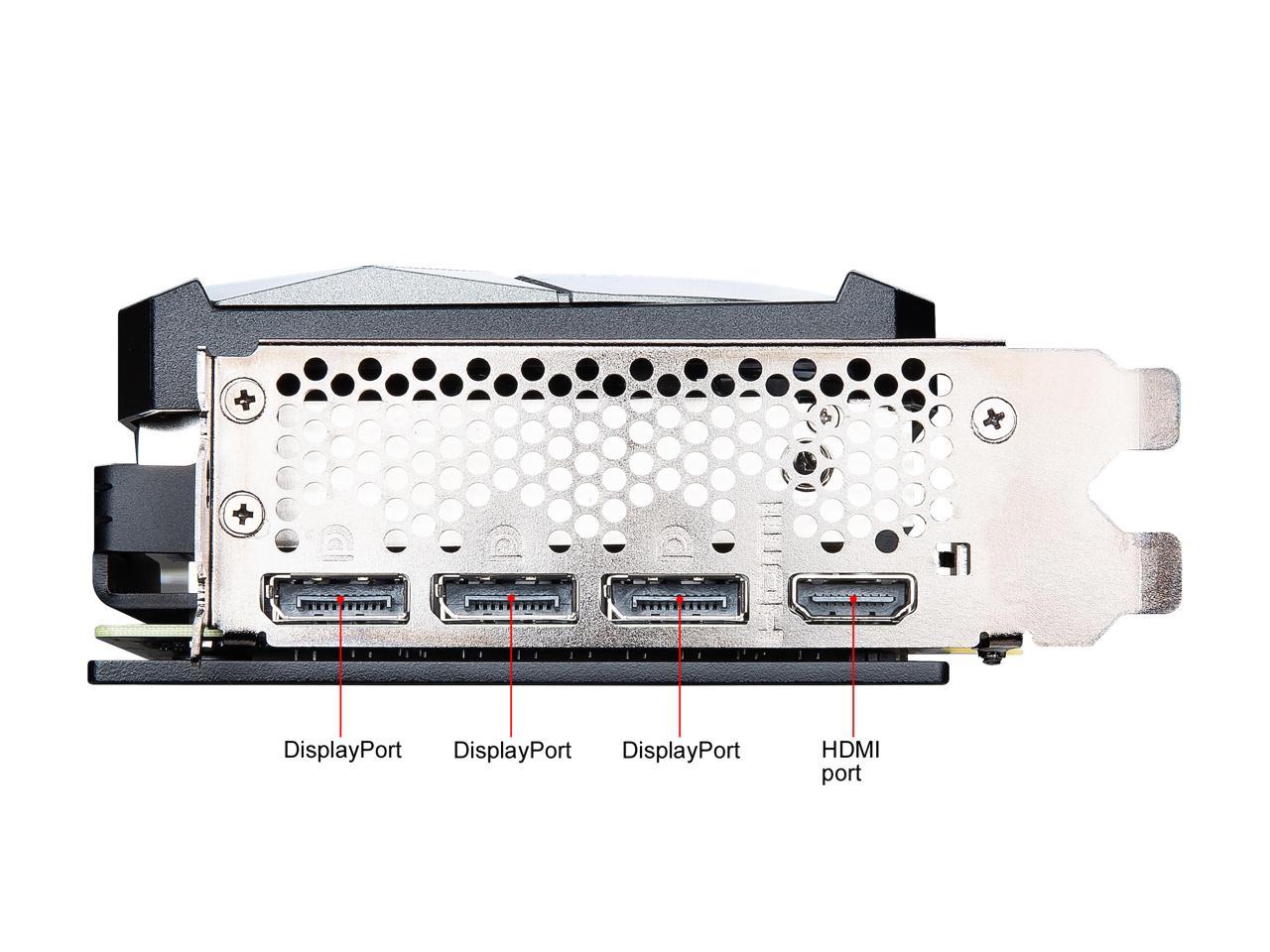 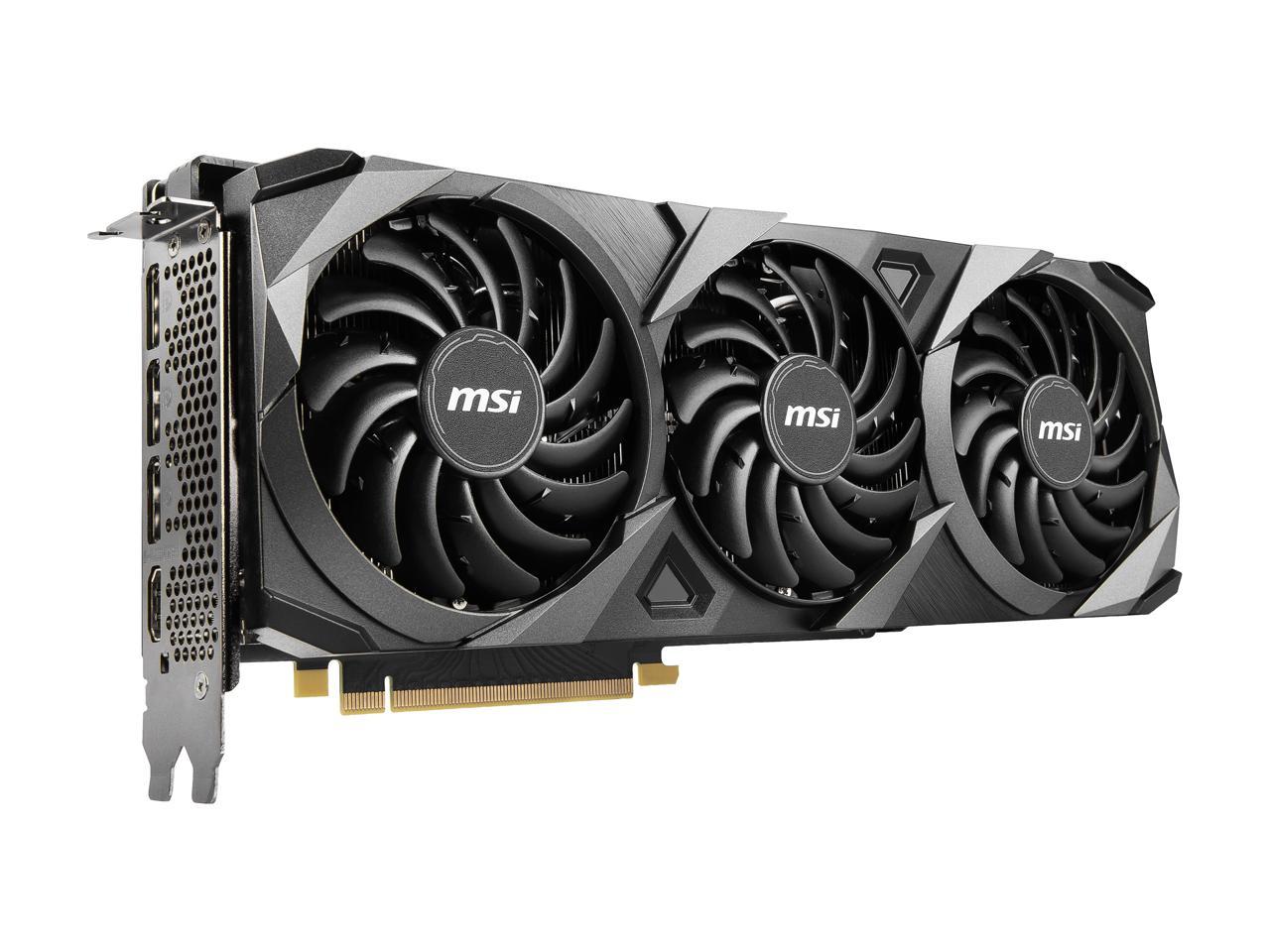 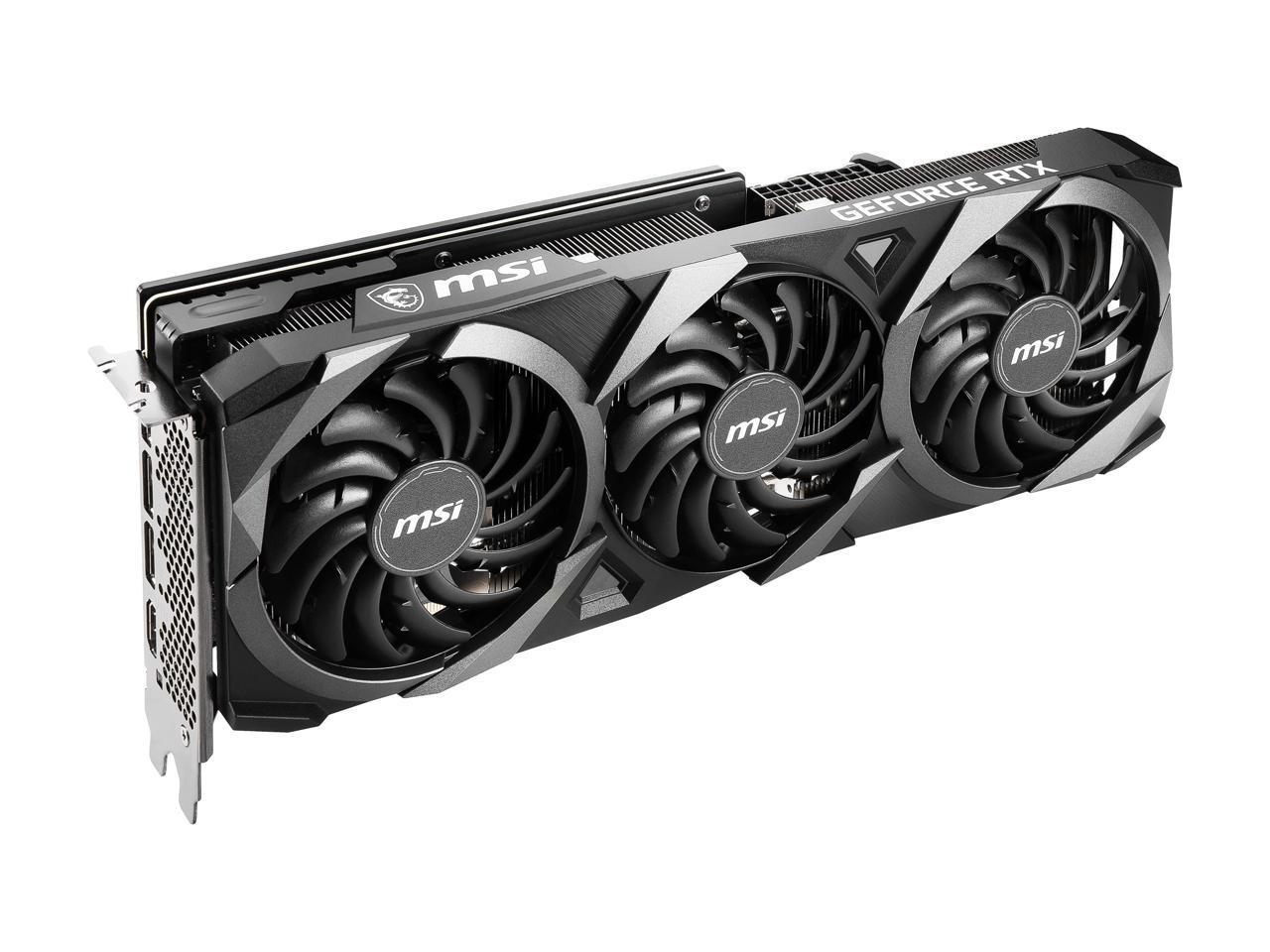 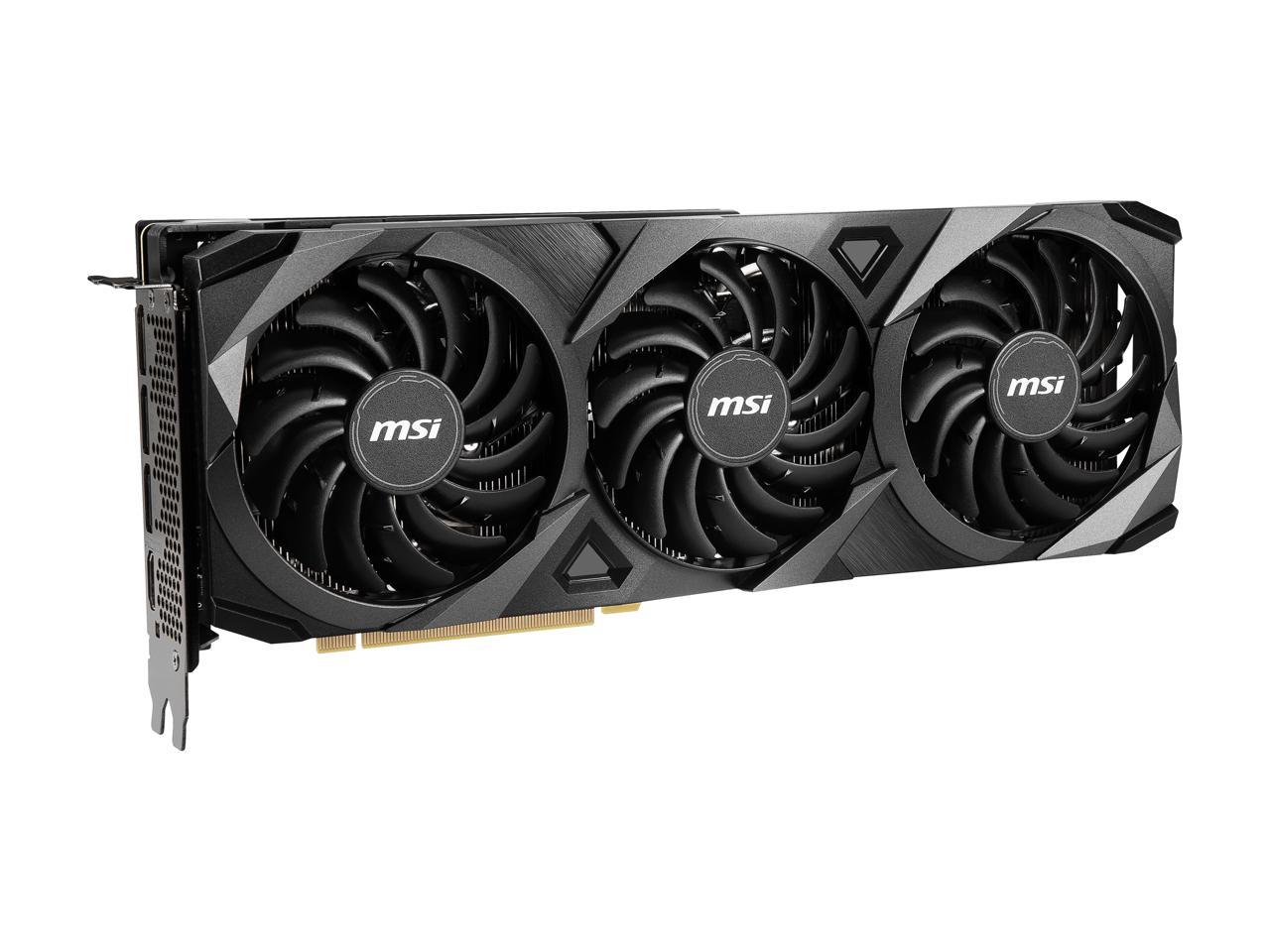 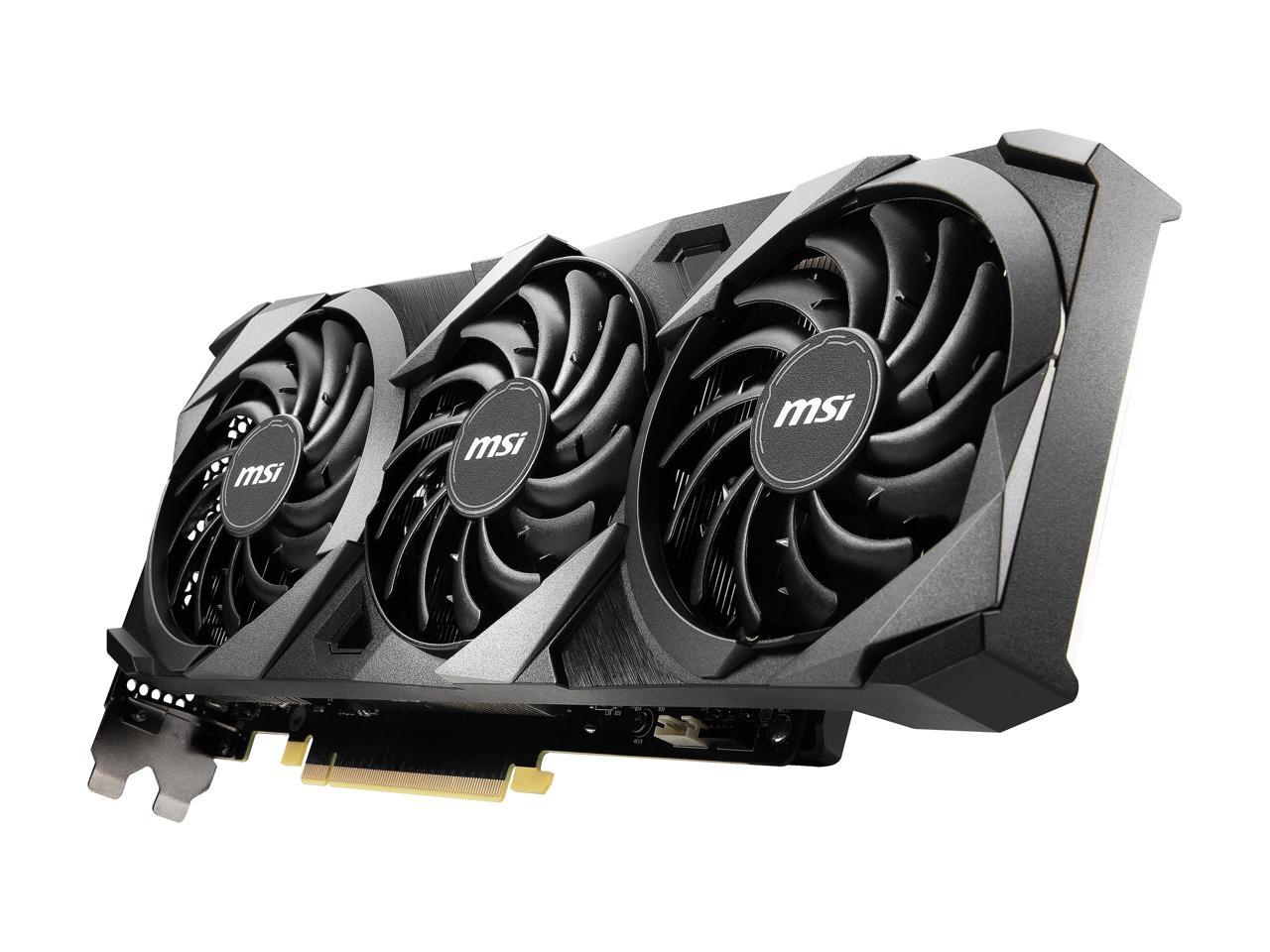 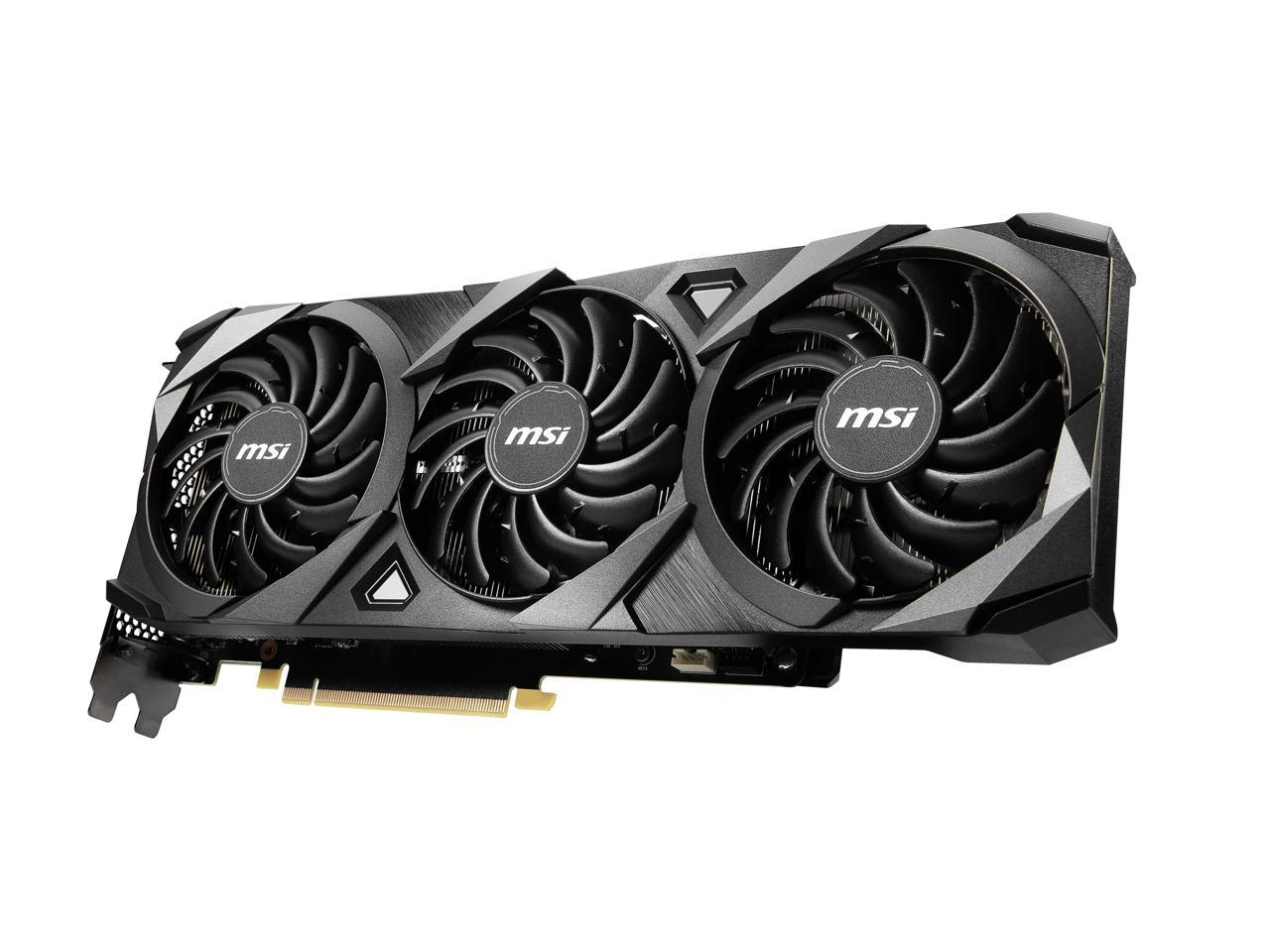 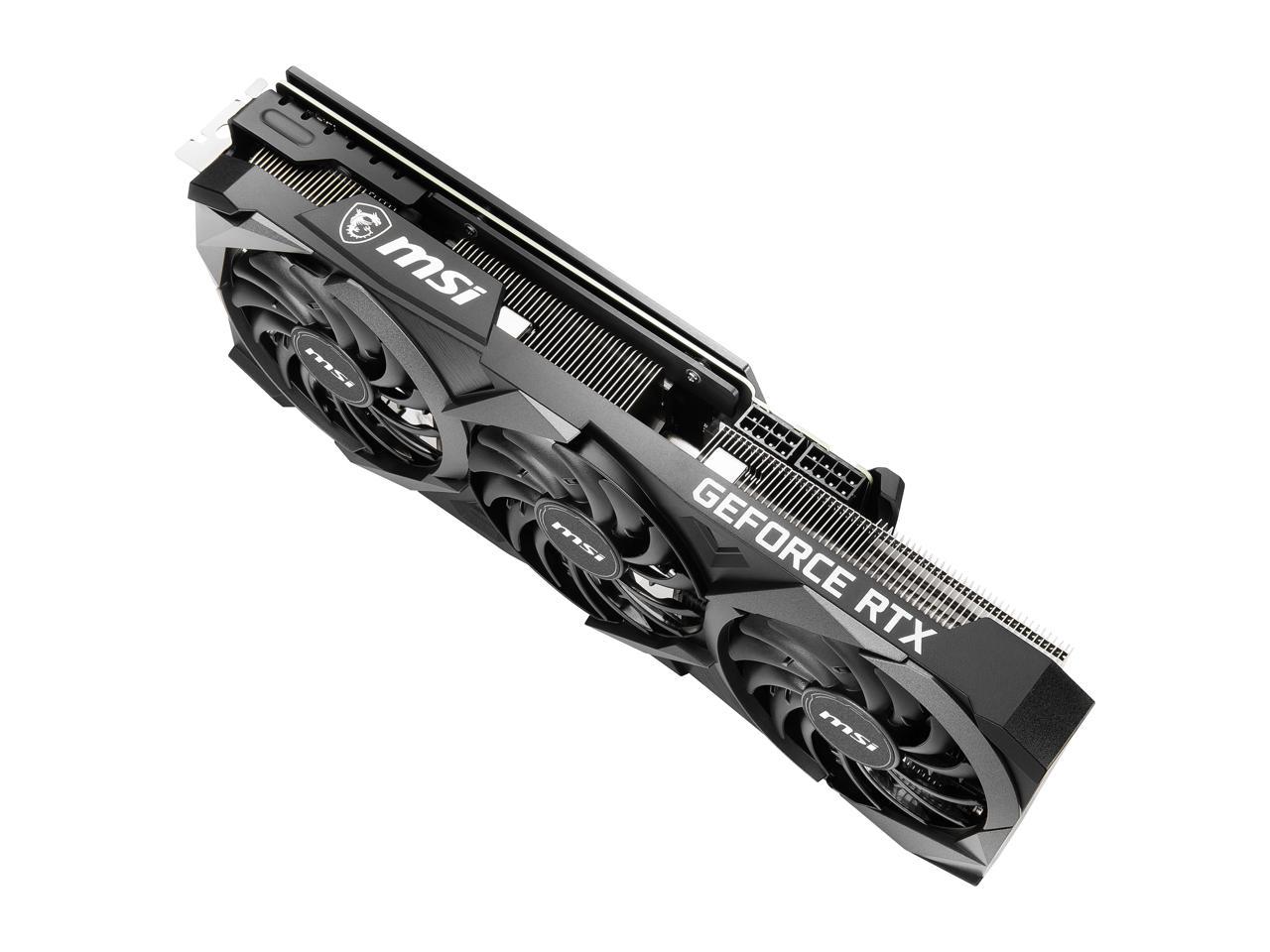 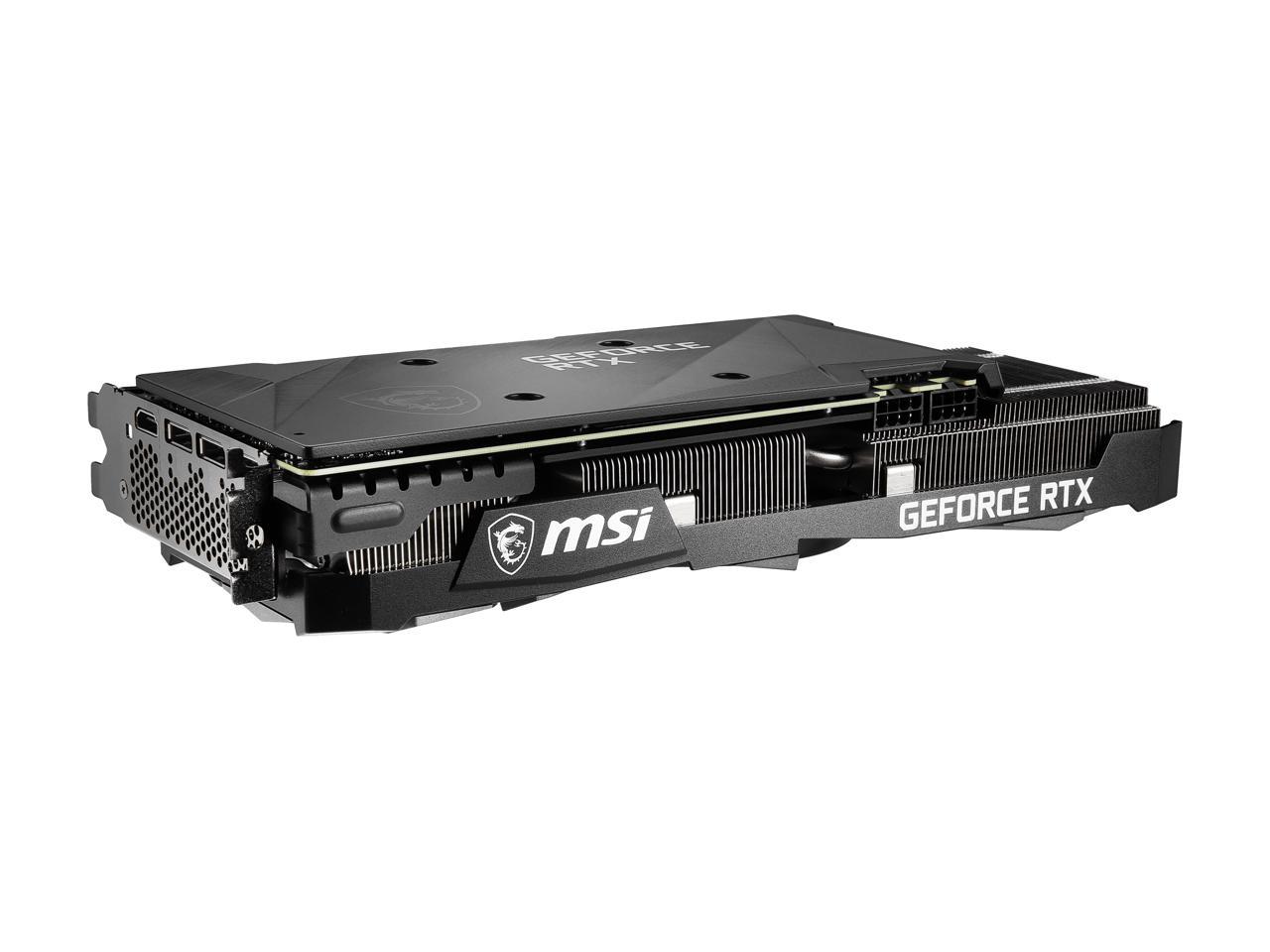 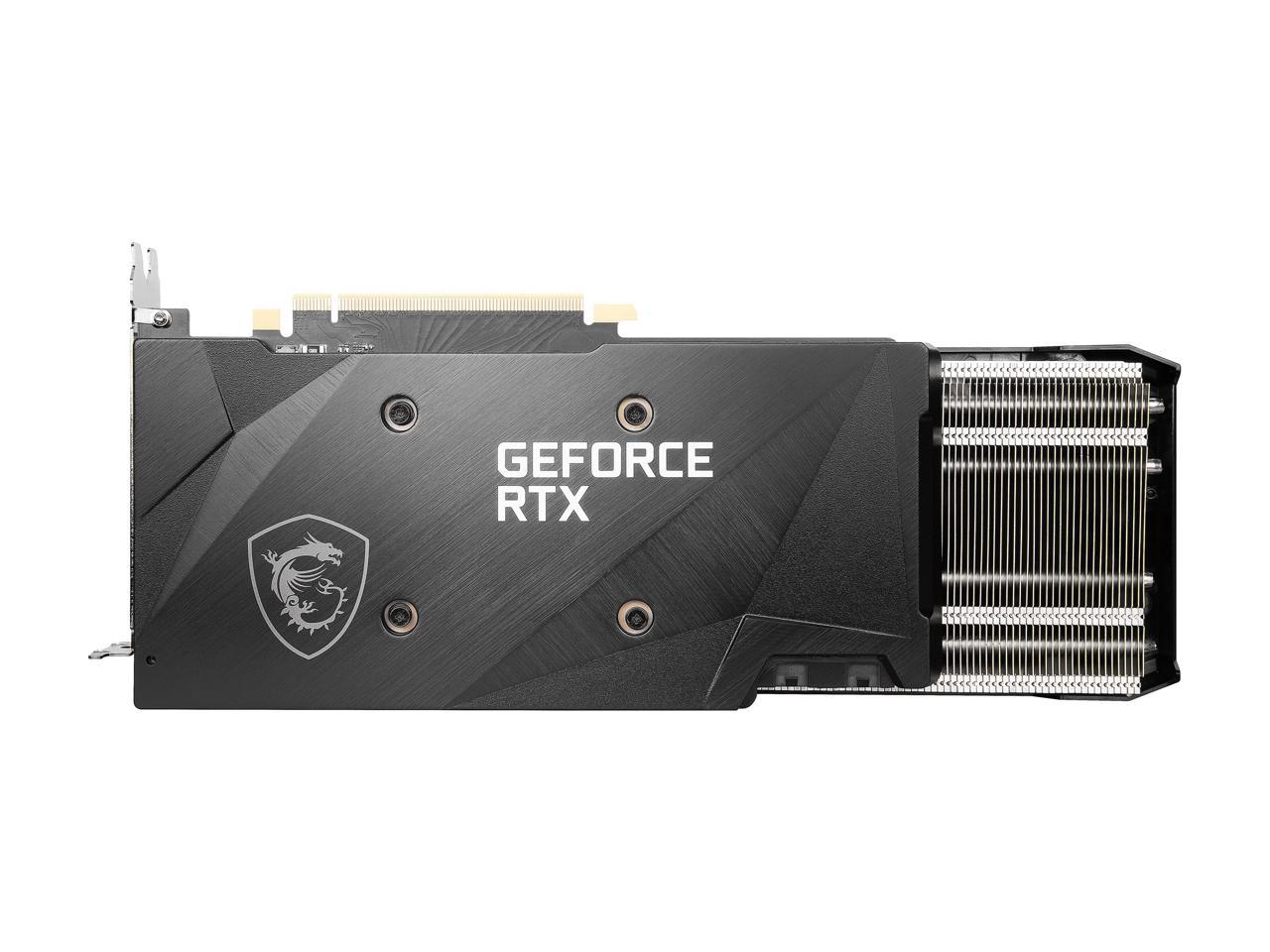 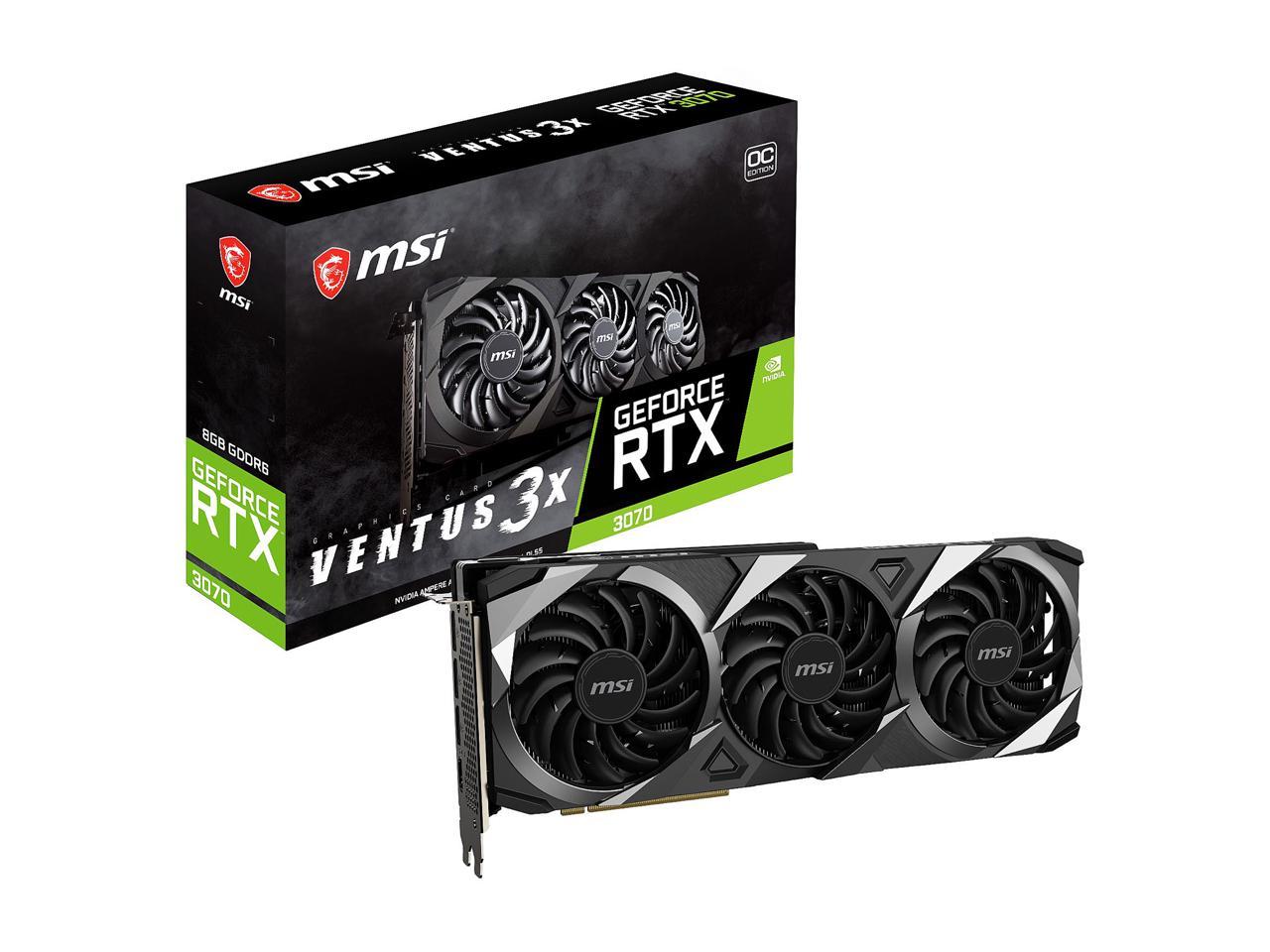 VENTUS brings a performance-focused design that maintains the essentials to accomplish any task at hand. A capable triple fan arrangement laid into a rigid industrial design lets this sharp looking graphics card fit into any build.

The award-winning MSI TORX Fan 3.0 design keeps the limits of thermal performance turning. Fan blades alternate between traditional blades and dispersion blades that focus and accelerate airflow into the heatsink.

Zero Frozr is the calm before the storm. The fans completely stop when temperatures are relatively low, eliminating all noise when active cooling is unneeded. The fans will automatically start spinning again when the heat is on during gaming.

Ample amounts of thermal pads allow various board components to transfer heat directly to the heatsink for better cooling.

A bundled support bracket can be attached to your PC case for additional graphics card reinforcement.

Not all circuit boards are created equal. A custom PCB Design provides greater reliability and beefed up power circuitry for pushing the card to its limits.

The GeForce RTX 3070 is powered by Ampere—NVIDIA's 2nd gen RTX architecture. Built with enhanced RT Cores and Tensor Cores, new streaming multiprocessors, and high-speed G6 memory, it gives you the power you need to rip through the most demanding games.

Cons: The most obvious is the lack of stock for buyers however do not let this ruin your opinion on the card. Sag bracket manual could use a-little updating to make it a-little more clear

Pros: This card gets some things very right: - Absolutely silent cooler design. - Decent looking cooler shroud, (excellent aesthetic if you have RGB strips and a vertical GPU mount). - Short PCB with long cooler allows for a lot of air to pass directly through the finstack.

Cons: Despite what's good, this card falls short in these areas: - 220W board power with no additional overclocking headroom hurts, especially when this card is labelled as OC (or, presumably in all other cases, overclockable). - "Boost" clock is 105 MHz (5%) above the Nvidia Founder's Edition card, despite MSI giving this card an MSRP of 12% more than the FE, (but boost clocks mean very little regardless because GPU Boost aggressively overclocks anyway, and pricing will vary depending on availability and other factors). - Plastic cooler shroud feels less than premium.

Overall Review: This card smells of artificial product segmentation...ie., it doesn't need to be nerfed with such a low power limit, yet MSI seems to have set the limits as low as they have to stay away from eating their own sales for the Gaming Trio (X and non-X lines). If that's not enough, for roughly the same price the Asus TUF 3070 has a stock board power of 240 watts and allows the user to overpower the card up to 270 W. Adding insult to injury, this card uses the exact same PCB and components as MSI's Gaming Trio 3070 (again, X and non-X lines. See techpowerup's teardown of the 3070 Gaming X Trio and compare with this card.) While the heatsink on the Gaming Trio appears to be different (different shroud and finstack), this card performs so excellently under a 220 W load there's no doubt that it could handle more power, especially given that its components (including VRM, of course) are identical to the Gaming Trio. In terms of performance, MSI's choice of 220 W for this card costs the user about 5 to 10% of what they'd get out of a card with 240 W to 270 W board power, which, ironically, is about the cost difference between this card and the FE's MSRP. Having said all that, none of this really seems to be MSI's fault. Gamer's Nexus has reported from an industry contact that board partner margins are at an all-time low thanks to how Nvidia is pricing thier silicon. Additionally, Nvidia's aggressive, often impossible or totally unrealistic pricing (re: 2080 Ti, RTX 3000 launch) has forced partners to make compromises (like this card, where the MSRP of MSI's 3070 Ventus 3X is 12% more than the FE) that just hurt the consumer. Obviously Asus has managed to deliver a 3070 package with an MSRP commensurate with its apparent performance gains, but while MSI has not, I can't believe it's because they don't want to be competitive with other products. The only likely reason is that Nvidia is making it impossible for their partners to work on such narrow margins, who kick then kick the bucket down to consumers. Altogether: if you cannot find any other 3070 to buy, this card will get an Nvidia GA-104 into your system. However, almost any other model or manufacturer is probably a better price-to-performance option, like the Asus TUF 3070 mentioned above. If you're feeling especially anti-consumer you might even consider Nvidia's own 3070 Founder's Edition, but know that you're solidifying a behemoth's position and controlling power over the industry.

Pros: -cooling seems great. I cannot get this card above 68c no matter what I do -not loud, even with a custom fan curve -runs any game you want at high settings. A total beast for 1080 or 1440 resolution

Cons: -power limit is 100% for an "OC" card this is unacceptable. Especially because 100% is only 220w. Should be at least 240 min if you aren't going to give any extra room to overclock an OC card. -pricing is not great. There are cards within the same price range with better OC, which is what this card is advertised for.

Overall Review: Overall still a great card if you want to run at stock settings. If you like to overclock your gpu this is not the one for you.

Pros: -Quiet -Cool, under benchmark loads I couldn't get this thing to break 68c.....gaming temps for me run in the low 60's. -No coil whine -Comes with optional support bar to prevent sag -Looks good aesthetically

Cons: -no RGB lighting but that is ok with me

Overall Review: After some benchmarking and breaking this video card in tonight with some Battlefield 5 and a long session of PUBG I can say that this video card performs very well! This video card is replacing a EVGA 2080 XC Ultra video card and so far in benchmarks and gaming I am noticing around a %20-30 performance boost. I am pairing this with a new Acer Predator XB323U 170hz monitor and a new Intel 10850k and so far this is a super smooth and nice setup. No complaints so far.........Good Job MSI, nice product!

Overall Review: If you don't feel like spending extra on fancy lights, and you just want performance, this RTX 3070 is the way to go. The triple-fan cooler is more than enough, which keeps it nice and quiet. The fans almost never turn on when just navigating the desktop. I don't think there's much to say about RTX 3000 series supply that hasn't already been said, so I won't waste too much time here. It sucks that people who have the money to buy a product aren't able to. I got lucky, but I hope that Nvidia will take steps in the future to give their board partners sufficient time before launch.

Pros: First of all, my order date was 11.03.2020 and i was so lucky to saw one of these cards available. It's been months and its a perfect fit for my rig. It shipped from Newegg(usa) to Turkey in 3-4 days and come to my hands in 10-11 days at total.(due to slow transaction customs in Turkey). I didn't pay anything more than Newegg's price tag, also shipping was free on this item at that time. I don't wanna write whole specs, running speeds etc. because there are tons of detailed guides and reviews on internet. But for my personal rig this card runs cool imo. Played Cyberpunk/WoW and never saw more than 75 C.

Overall Review: Great one, don't miss this one if you can find it. :)

Cons: Not a con, but if you order it. Better make sure your case is big enough. Is a very long card.

Overall Review: If you can ever buy one. The 3070 is an excellent card.

Pros: -It has some seriously low temps. I couldn't get temps over 70 degrees in-game. -Great performance in games.

Cons: -It's big. This personally wasn't an issue for me but for some with smaller cases it might be worth checking dimensions.

Overall Review: -A great upgrade for anyone with GPU heat issues or just wanting some sick raytracing. -It's a big and heavy GPU, double-check your case and motherboard. -Forgive my bad cable management.