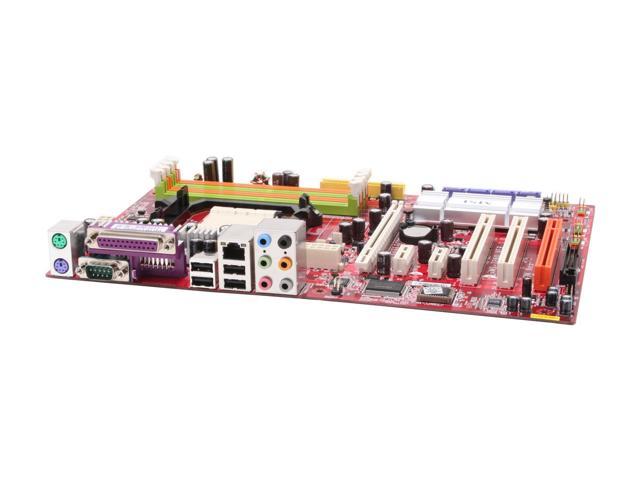 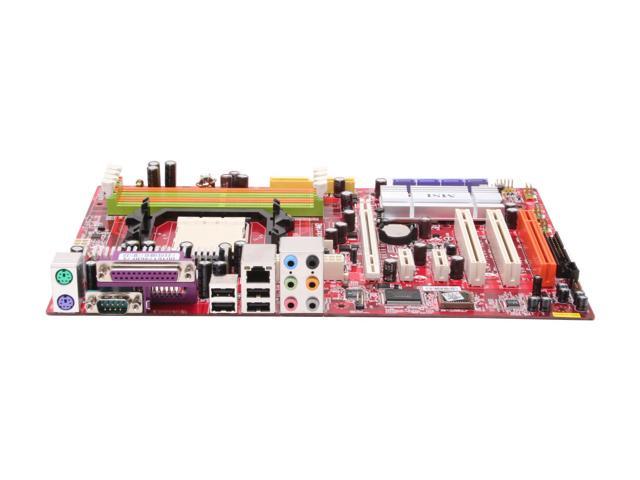 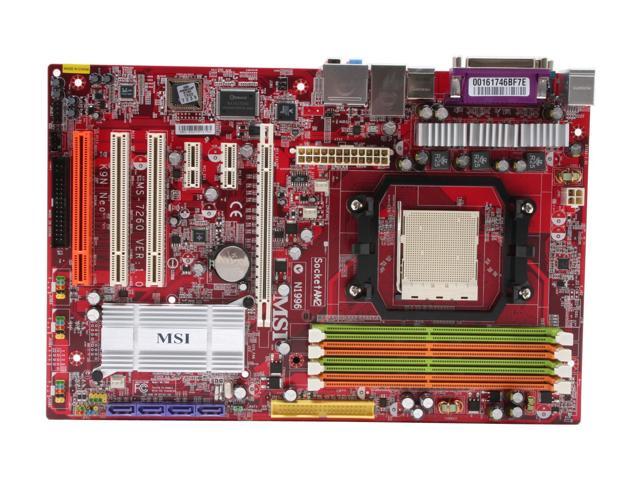 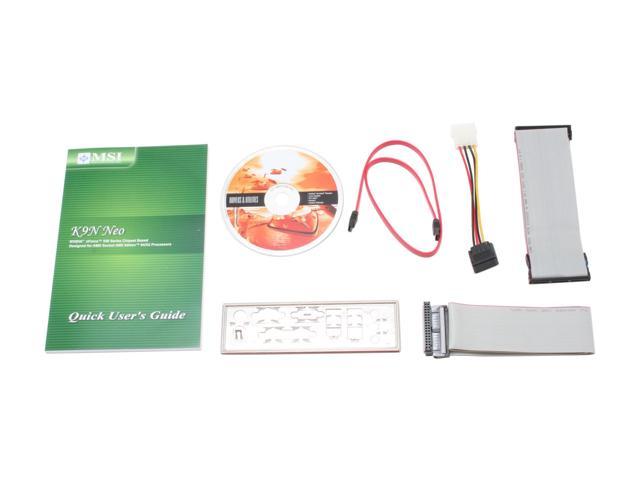 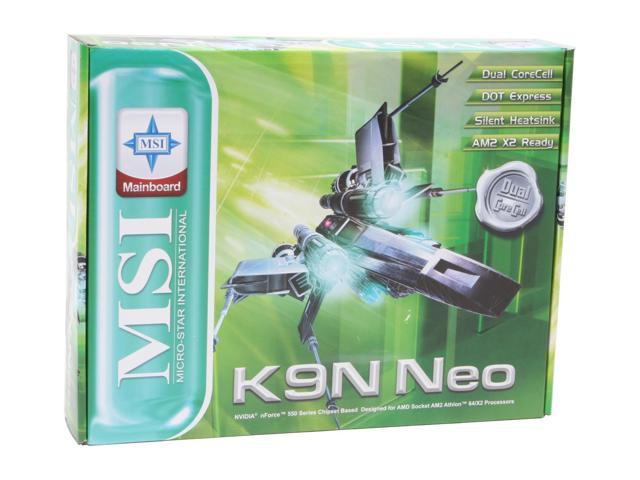 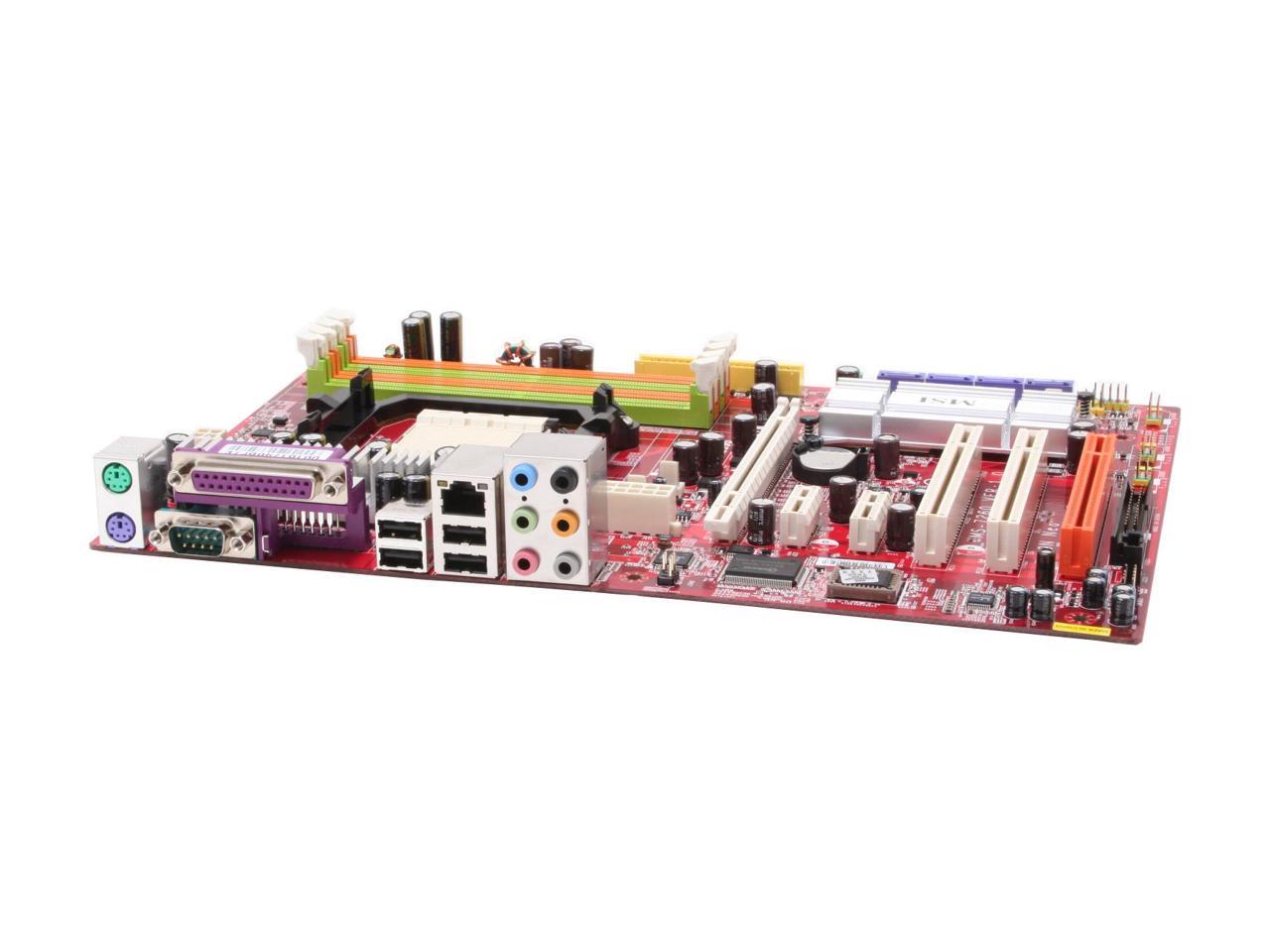 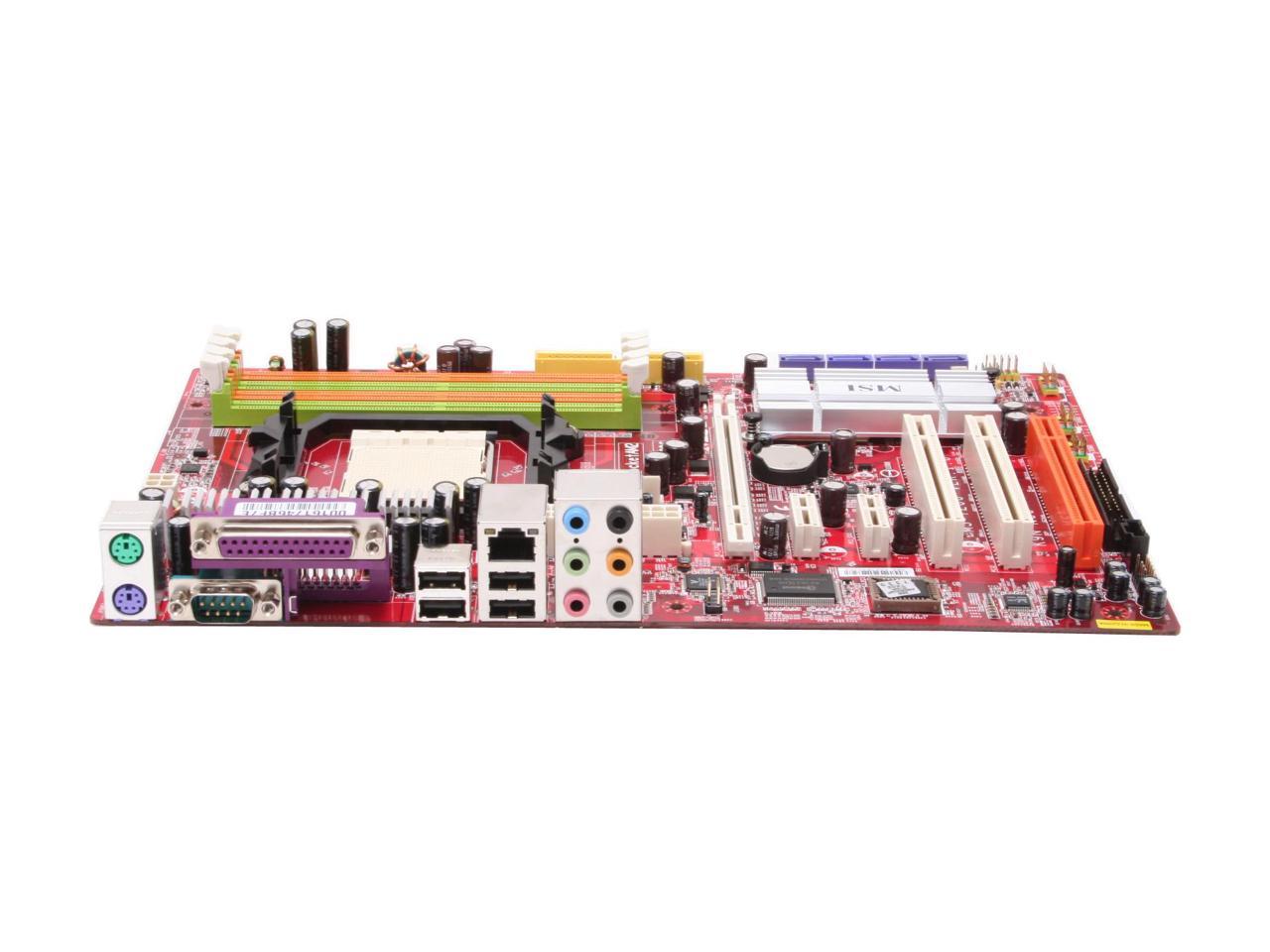 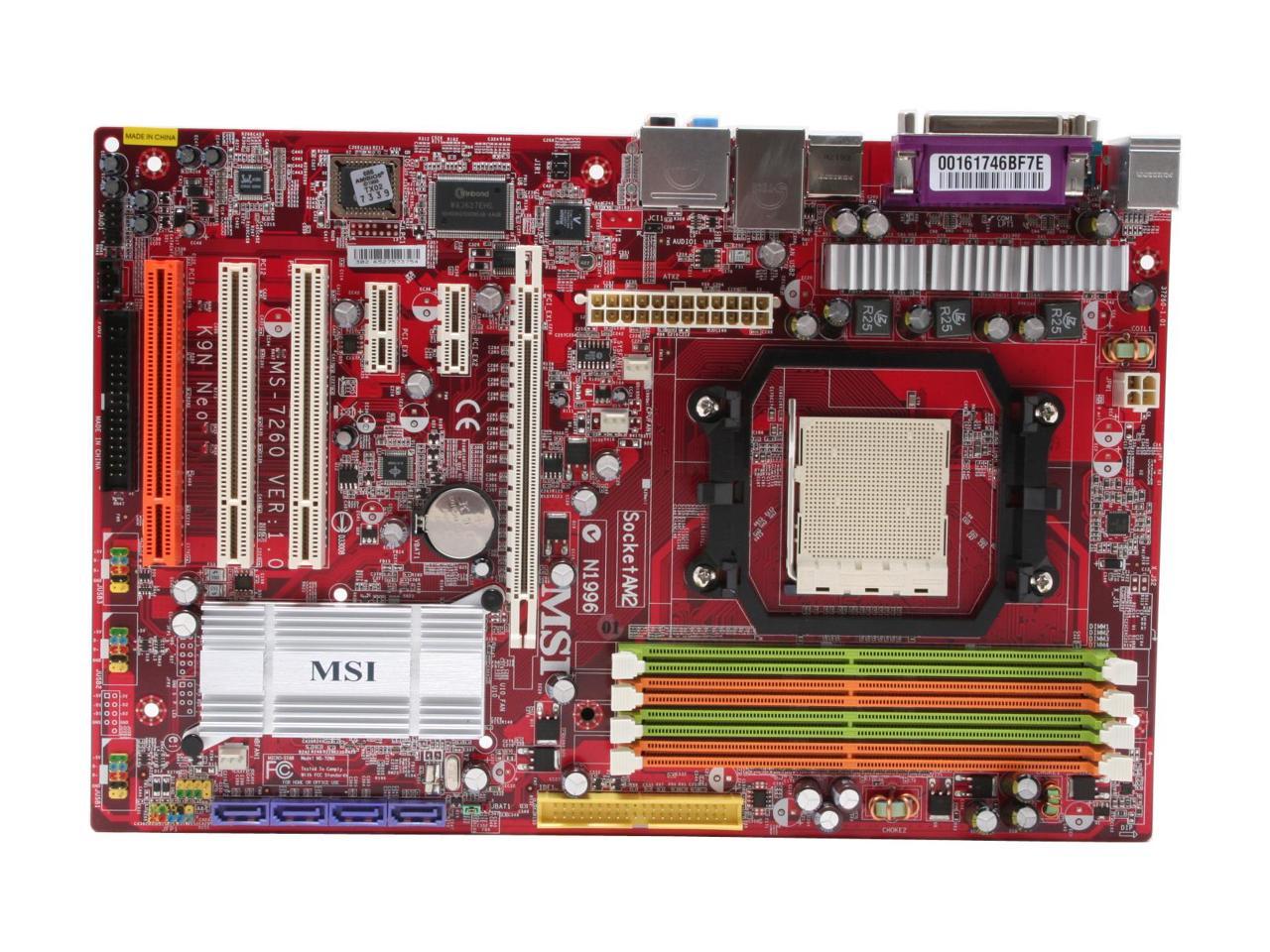 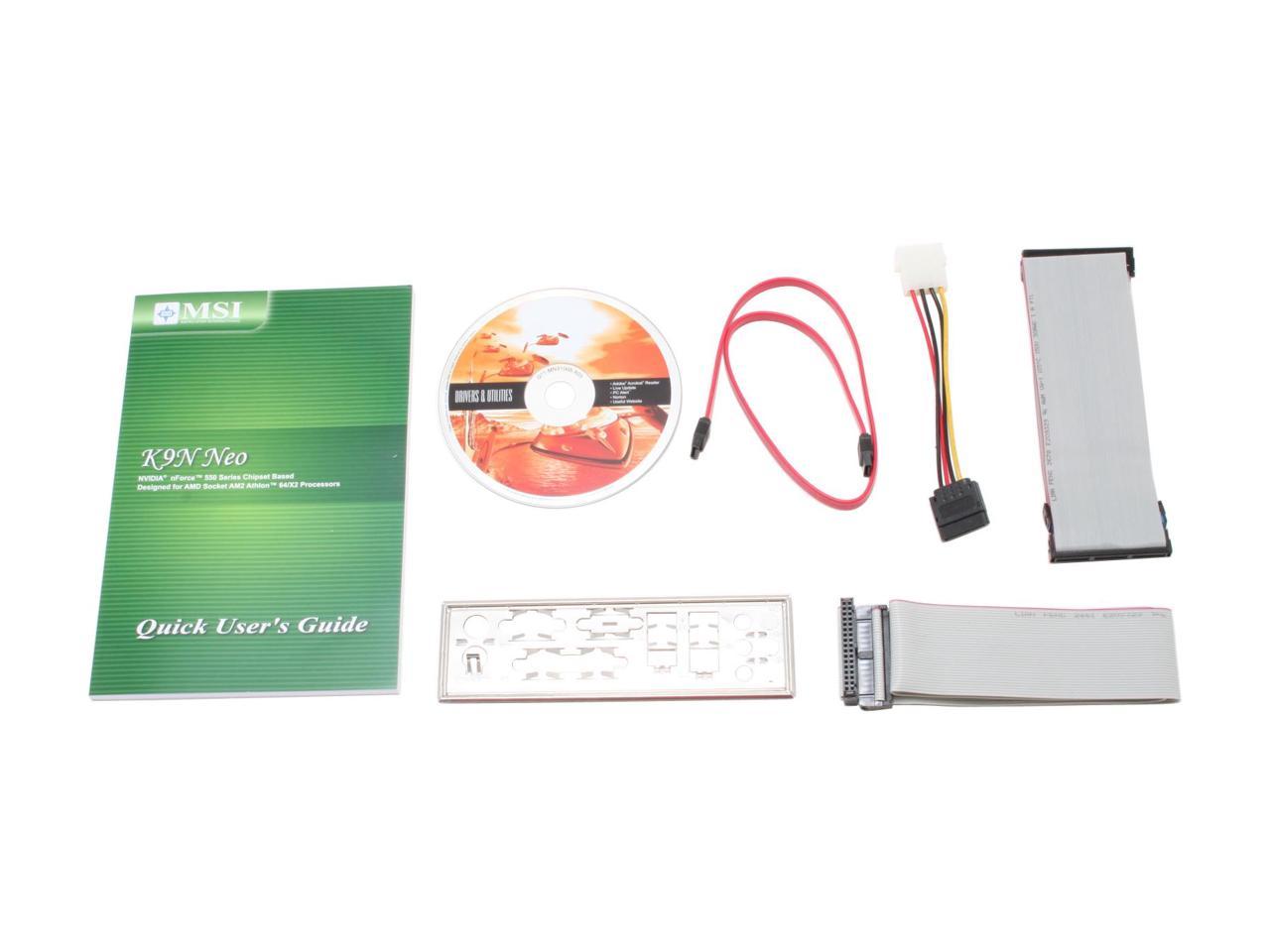 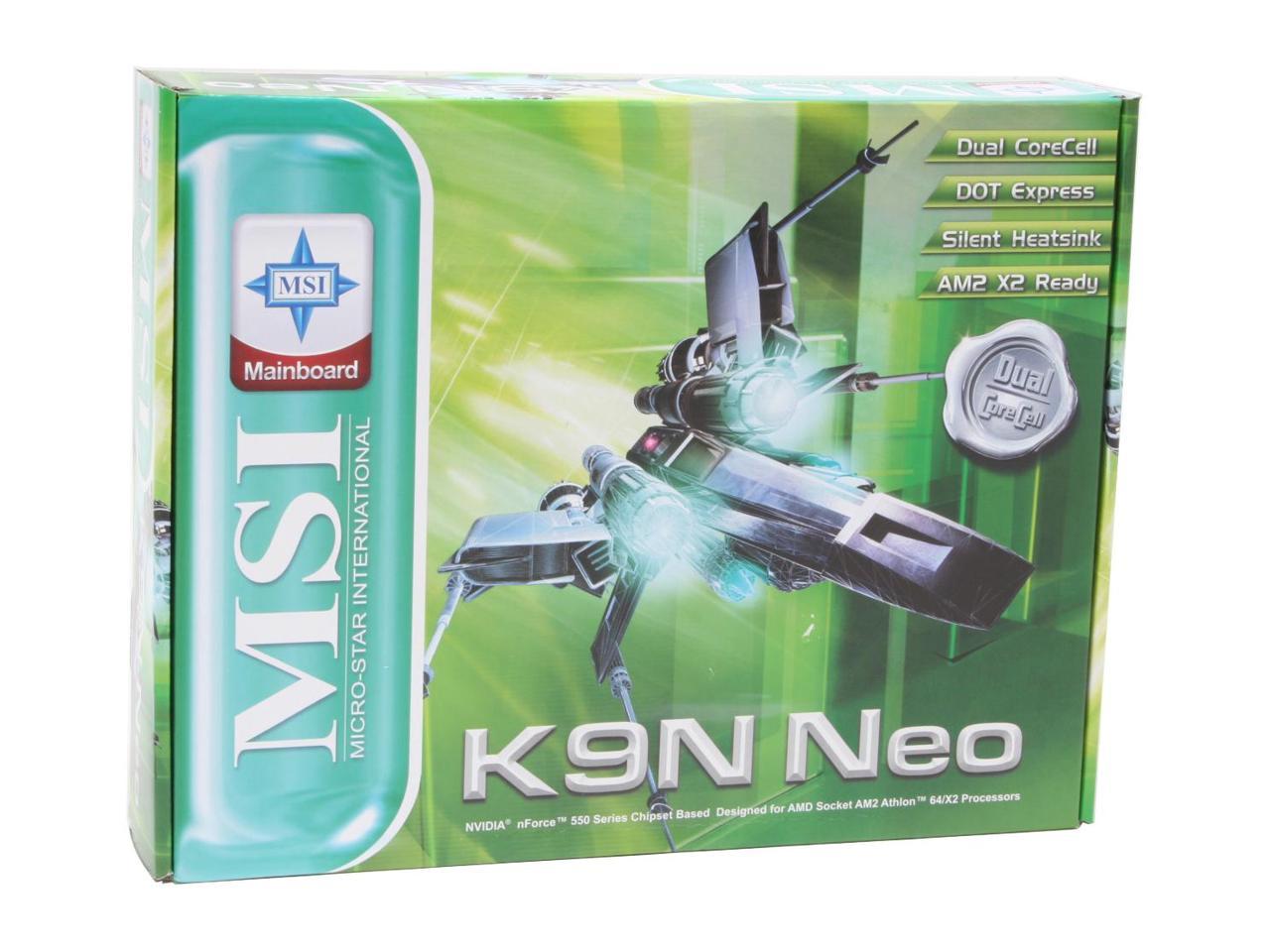 (91) Write a Review
OUT OF STOCK.
Overview
Specs
Reviews
A full featured motherboard with plenty of power, the MSI K9N Neo-F is great motherboard for anyone needing to replace or upgrade their system. Equipped with an AMD socket AM2, suitable for Athlon 64 and Sempron processors, including the X2 and FX series, the K9N Neo-F is more than capable of handling anything you may want to run. Using the Nvidia nForce 550 chipset the K9N Neo-F supports up to 4GB of DDR2 memory for supreme power.
It also includes a gigabit Ethernet port, 7.1 channel onboard sound, and 4 SATA ports. Those 4 ports, let you add multiple hard drives to the system, the mobo supports RAID 0, 1, 0+1, and JBOD. The K9N Neo-F has multiple expansion slots to use including one x16, and two x1 PCIe slots, plus an additional three PCI slots. Build a powerful system: the K9N Neo-F is a solid foundation.

Pros: It is a good Motherboard. Now that I have it working properly I am very happy with it. I had an M S I board previously and it lasted me 5+ years, so I went with them again. With 1.9V Corsair ram it booted fine, but have had some issues with ram speeds.

Cons: M S I didn't have the proper raid drivers for the NForce 550 chipset. This caused some major headaches when trying to set up a raid. See other thoughts for the solution. Had to update the BIOS. M S I's software made this rather simple. My RAM originally read at 400 MHZ. After increasing the SB to CPU bus to 1000MHZ, the ram now reads at 533, but not 800 like it should. Still trying things with this. I'm hoping it will be resolved with a future update.

Overall Review: My configuration: This board, AMD Atholon 64 X2 3800+, 2Gig Corsair TwinX DDR2 800 (1.9v), SATAII Raid0, MSI GForce 7900GT I tried using the RAID drivers for NForce chips on MSI's site. These didn't work. You have to use the ones on the MoBo CD. Also, I slipstreamed the drivers into a WinXP install CD, as I read online that they are not Signed (NVidia's fault, not M S I's) so you might get a BSOD if you don't. I don't know if it would have just worked off the floppy. Before updating to 1.3 firmware, I was getting a BSOD randomly. Now it seems to be fine, but I haven't used it super extensivly. I'm pretty confident that future releases of this board with firmware 1.3+ should be fine. The reason I'm giving it a good is that now that I have everything done, it works very quickly and very stable. If you need some info on how to slipstream the drivers into WinXP, email me at breean1011@yahoo.com

Pros: Once I had the bugs worked out, it performs like a champ! No issues since the BIOS update. VERY happy for the price! I'm not interested in SLI because a newer video card will always be better than 2 decent ones in SLI.

Cons: This board WILL NOT WORK WITH DDRII 800mhz RAM OUT OF THE BOX!!! I had to buy (and return) cheapo DDRII400 at Bestby to get it to boot and update BIOS before I could run my OCZ DDRII800mhz GOLD ram.(ADJUST MEM VOLTAGE TO YOUR MEM SPECS AFTER YOU GET IT TO BOOT WITH THE CHEAPO RAM)

Overall Review: My board shipped with v1.2 of the BIOS. This will need to be updated to the v 1.3 BIOS to boot newer ram correctly.

Cons: none, maybe the front header case output is a big downer. But that's not the MB's fault.

Overall Review: You will hate the audio front header case output. It has the new Azalia HD audio output for the front case output, and most cases still have the old AC97 wiring. They are not compatible. Very frustating.

Pros: Runs everything without a problem. Connected, installed drivers. All working. Cool overclocking options in BIOS. Instead of changing FXB speeds, you can do it automaticlly with precents and titles. 1%oc is captian. 15% oc is commando

Cons: Had a problem getting first board to post and the absence of a d-bracket made troubleshooting difficult.

Overall Review: I've read a lot of people having issues with a stable configuration; for what it's worth I'm using Dual Channel Patriot Extreme memory (which isn't officially listed as being supported by MSI) and it works fine.

Pros: Great deal for a nice motherboard. Haven't had problems with it at all yet. Runs great in my new build.

Cons: As others have said, AM2 heatsinks and fans are a bit scary to clamp down. It will take a bit more force than you'd like, but it's how you get the job done.

Pros: A flawless build with my second MSI board. Has the features I want without having to pay for the ones I don't (SLI, firewire). Case has a side fan blowing onto board so I haven't noticed any heat issues with its passive cooling.

Cons: Still waiting for board utilities for Vista. Ram slots are a little close to the CPU for big coolers although I was still able to use the first slot with a Zalman 9500.

Pros: Worked well and booted quickly, while it worked.

Cons: Failed after a day. Sent back to newegg for replacement. It makes no beeps or video. Also, the manual that it comes with is fairly poor (short and spends alot of pages covering features of other models). There is a better more complete manual that can be downloaded from MSI. I recommend getting that. The CPU is a bit close to the ram, if you have a big heatsink the first two RAM slots might not be usable.

Overall Review: A failure is not all that bad, as long as my experience is not typical.