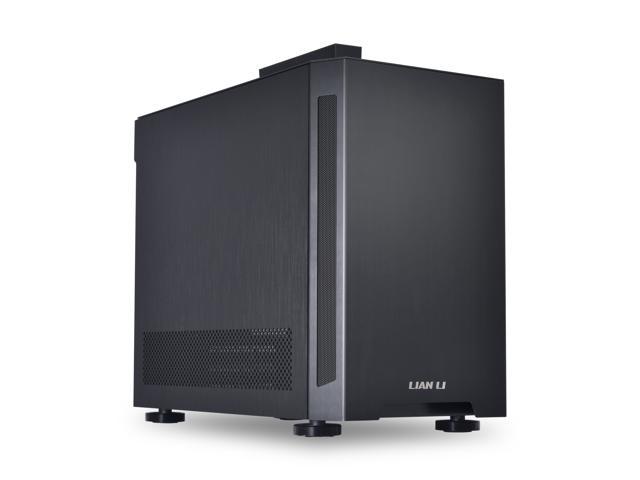 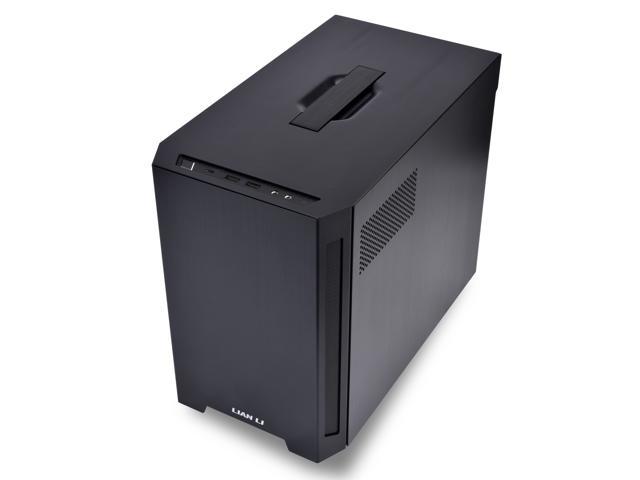 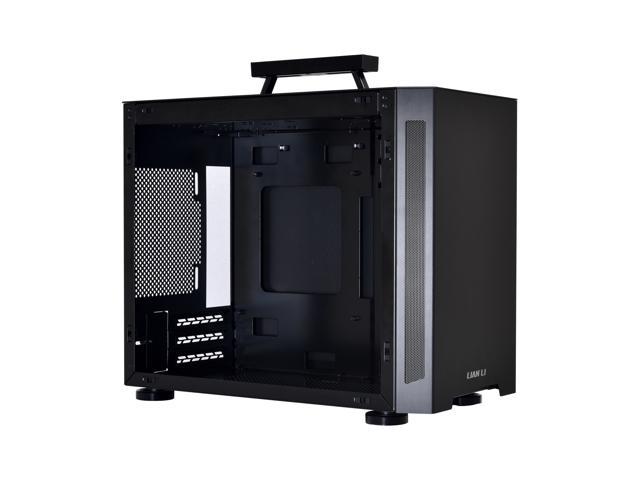 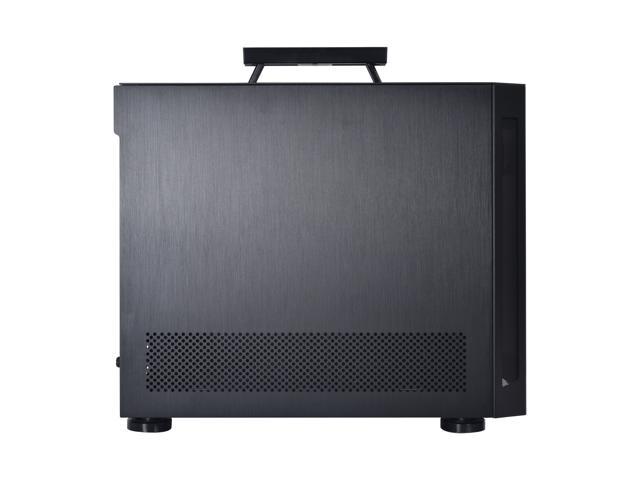 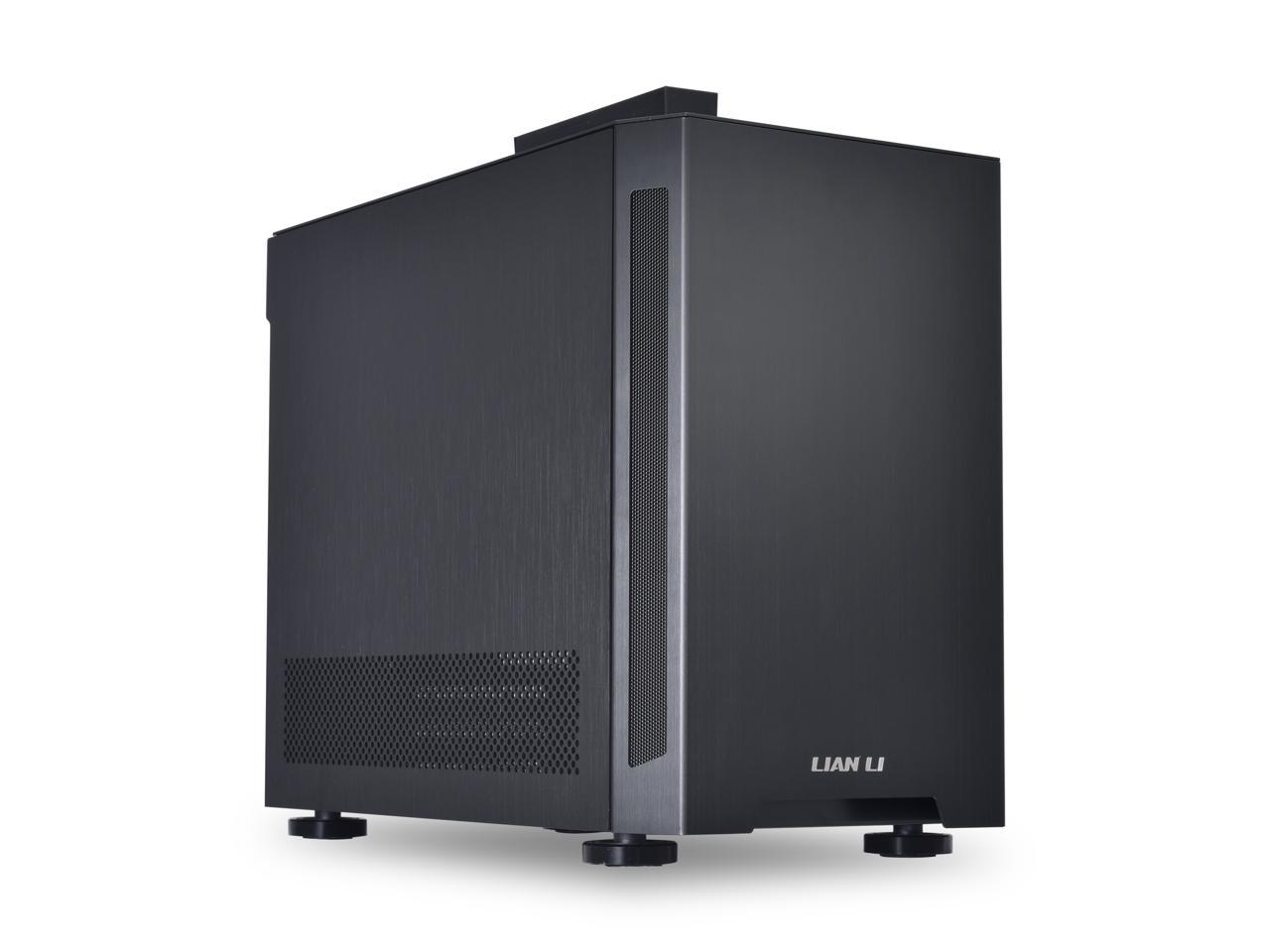 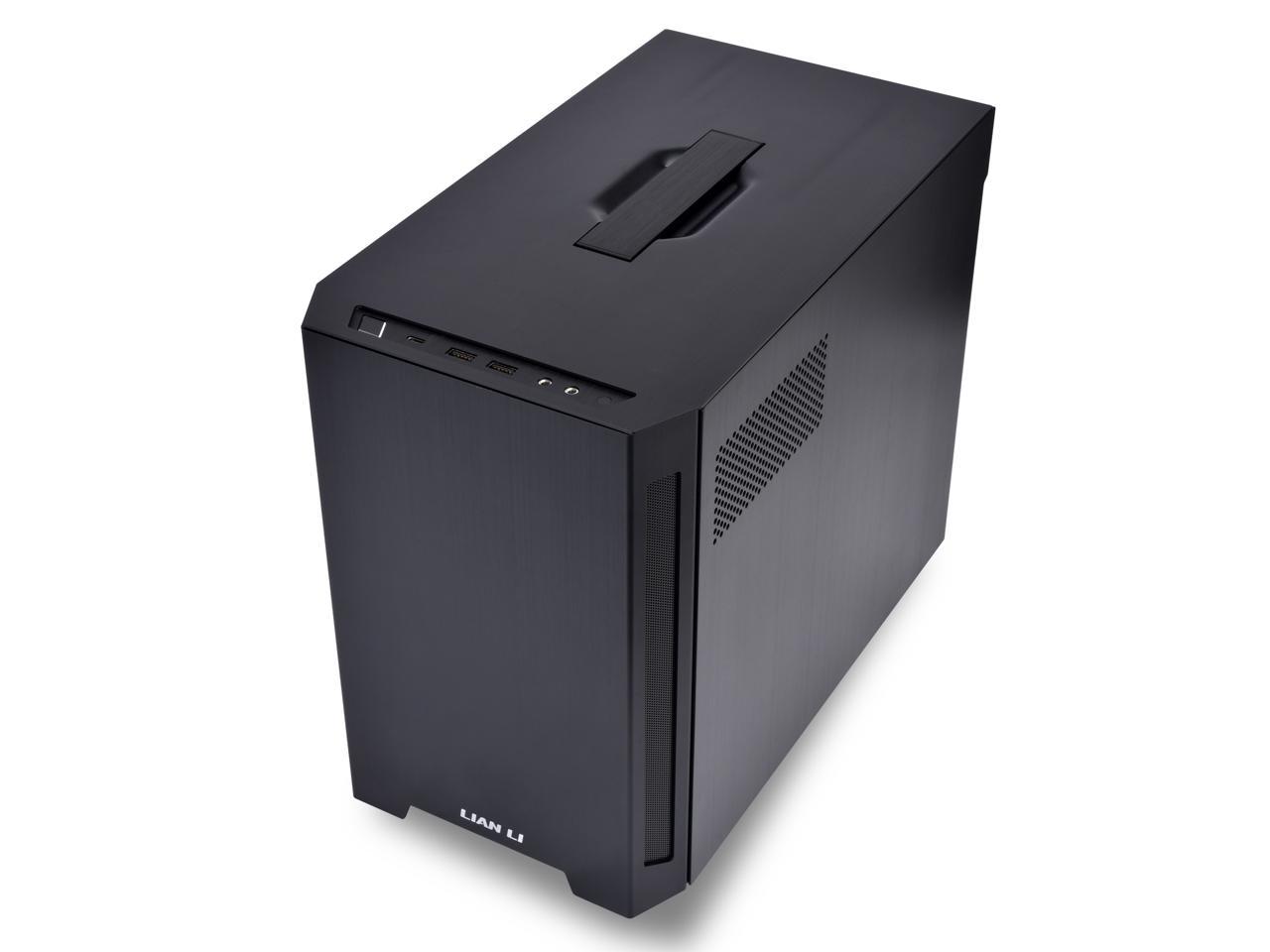 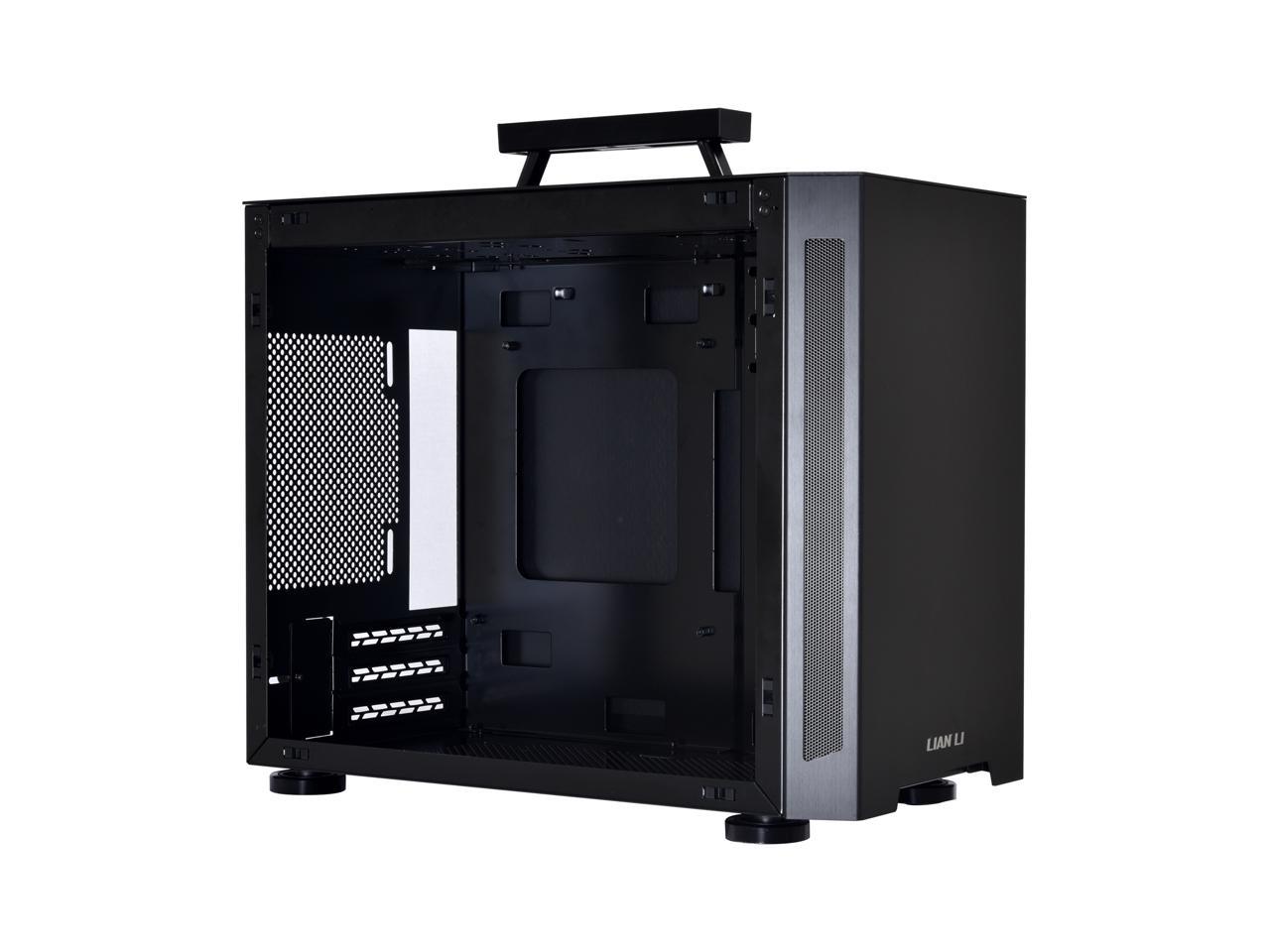 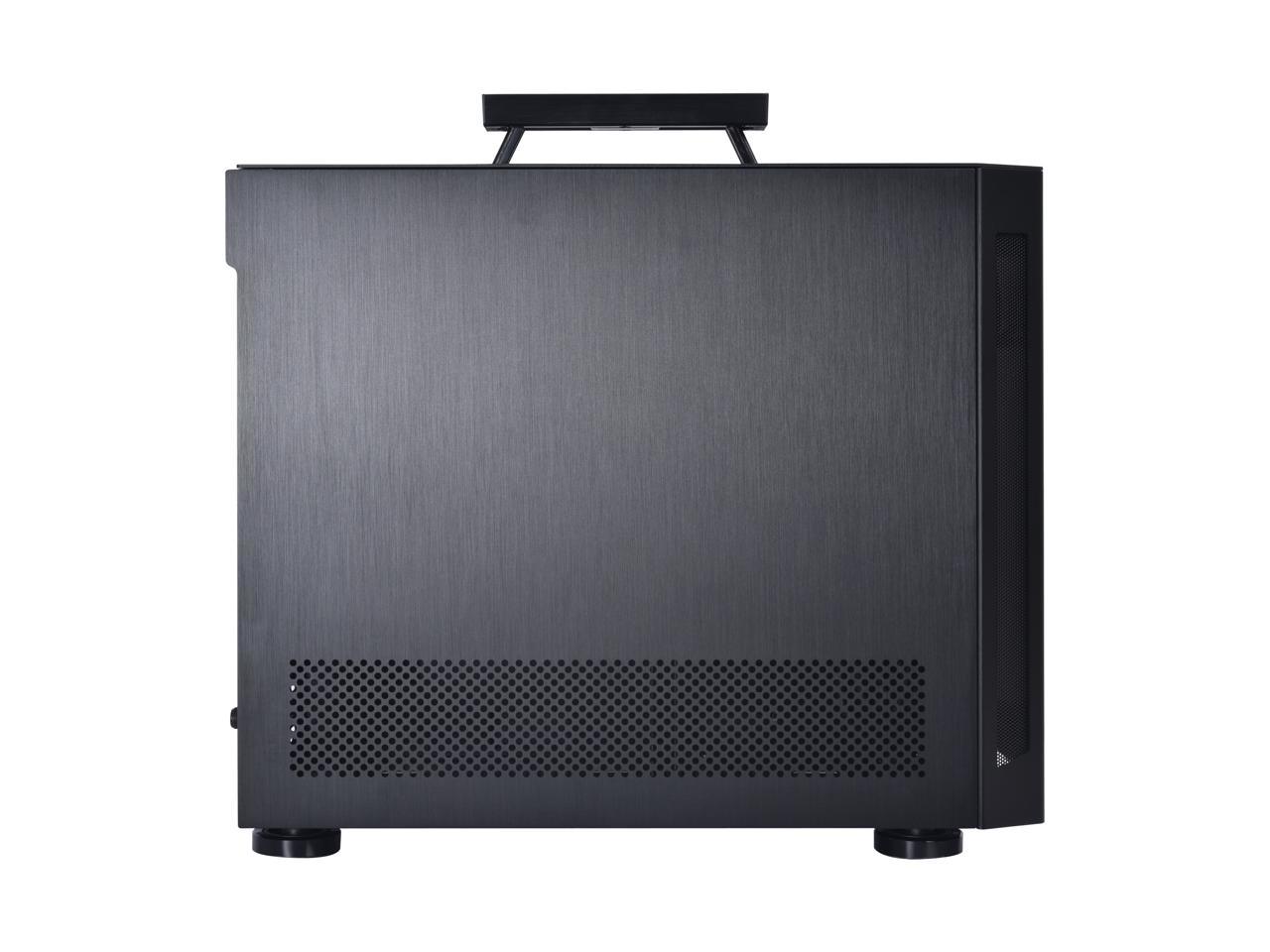 Pros: I really like this case, but will mention one thing I felt could be improved, but won't dock any points overall. -Easy wire management -Panels are easy to work with -Lots of room for a small build -USB Type C Gen 2 -Carrying handle -Supports 12" video cards -Front Fan Filter For a 12" video card, if a front intake fan was installed at any point, it will most likely need to be temporarily popped out to install/remove the card at an angle if it's 2+ slots.

Cons: My only complaint with this case may not necessarily matter at all to some, but I wanted a very quiet build, so, having said that... The rear exhaust grill has holes that mimic a power supply design, meaning that they're the little tiny holes that limit more airflow compared to larger ones you'd often find on a desktop case. I did not like this design, as the rear exhaust is the main source of heat removal since there isn't top exhaust. As a result, a fan I previously used for a quiet build had to be turned up more to keep a Ryzen build, uh, "cool", but it was, for me, just too loud/hot, so I got crafty. I decided to draw out a circle and cut out the grill entirely for the 120mm fan size, and after a dash of black paint around the edges, and a black 120mm fan grill/finger guard I had already, it actually looked great. Thankfully, my effort wasn't wasted either, as it made a huge difference in the airflow/noise combination. I have the fan back at only 30% on idle, and it only has to rev up a little more (like 40% or a but more) in games. This also helped my video card drop to to <=70 C again so its fans wouldn't rev up more than I was used to. It was usually 68C or a tad less in another build, but jumped to ~75 C in this one before the tweak, making it just hot enough to get the fans too loud for my quieter preference. My processor stays in the mid 60's C now for the most part, whereas before it wasn't shy at all to say hello to the 80's.

Overall Review: Overall, I totally recommend this case for all its perks. I just did a very particular mod to make my setup quieter/cooler for both idle/gaming. I was still happy enough with it beforehand. I have no idea how a water-cooler setup would compare. I really do wish the original design had larger vent holes on the back, but this may not be an issue for others at all. By having a front fan lightly assisting with airflow intake, but the bulk being pulled from the open vents on the bottom by the rear fan as well (as this MUST be a "pull" configuration with fans to avoid considerable heat buildup), it's been great. TL;DR - Great case. I did a thing to help the airflow. Worth it.

Overall Review: ITX with plenty of room. Very well designed and thought out. This was my first ITX build and I heard it would be a challenge getting all of my components to fit with clean cabling, as this has a window on the side. There is PLENTY of room in this case. Running an i7-9700k with a 2070. I have a Noctua D15S on the cpu and my temps under stress load go highest 77C. There is enough space to fit Noctua's biggest cpu cooler. I was worried about airflow with only one 120mm fan on the front and one on the rear, but the two fans I have are doing fine. I also added two slim Noctuas to the bottom of the case for added air intake. Temps are perfectly stable. I don't think there would be room for a big radiator AIO with the video card in the computer, which is why I went with air cooling. Works perfectly. Build quality is great, handle is awesome, and all the panels being able to take on and off is an added plus. Being able to run cables up and use the top of the case as a cable run made things easier as well. Overall I was blown away at how nice this case was.

Cons: One of the snaps for the side panel was bent, and the subsequent plastic clip was broken. Not a big deal, 7 out of 8 clips is fine for the one panel. Could use a magnetic filter for the bottom 2 fan spots.

Overall Review: Overall it was pretty easy to put together, the space under the top panel, the attic, is awesome for excess cable and the rgb controller. Side notes: With fans on the bottom and a 2 slot graphics card, it's a bit tight, but you have maybe half an inch gap between them. Using an aio water cooler as the exhaust fits on the back but hits a clip for the side panel if you want to slide it higher in the mounting spot. Ended up removing that clip, replacing the broken one on the other side, so all is well. First time building an ITX form factor, highly recommend this case, it was a breeze to put together.

Pros: Small Has a handle which i use more than I expected Thermals are better than expected Toolless makes working on it very easy Attic is nice for cable managment Looks awesome imo The blacked out area on side pannel keeps the cable managment looking very clean Magnetic handle is nice and feels good in hand I thought it was easy to work in

Cons: Thermals could be better if they did my below suggestion they couldve added a slot for another 120 fan in the top If the case was made a hair longer the ssd coulve been moved to a spot on the bottom front of the case and the 3.5 coulve been put where the ssd is for better cable managment. Because it needs a sff psu the attic is nice but unless you do custom cables is still limiting but can still be made to look nice. I dont love the feet they use on this case but that's just me nitpicking If you use a 2.5 or 3 bay gpu with a mini itx you cant really fit 120 fans nicely unless you get slims If you get the dtx mobo no fan support in the bottom at all A custom gpu mount from the top or something that could mount to the radiator itself could make water cooling support better but I dont water cool so....

Overall Review: All in all I think this case is amazing I highly recommend it for gamers and or people who move their tower around. I've considered buying a second one and modding it with some of my mods in the cons section to make thermals and cable managment better but the cons on this case for me were def not enough to stop me from buying. While gaming I saw max temps of 75 c with the stock wraith prism cooler amd gives you and 2 lian li bora digital fans one front 1 back. I'm sure better temps could be acquired with a bigger tower cooler or aio and fans in the bottom maybe a blower style gpu keeping less hot air in the case could help to but I dont think any of it is necessary.

Overall Review: There are plenty of reviews out there you can read about this case, professional and customer feedback so I won't really go into how awesome (for me) this case is. I just wanted to comment on how fantastic customer support was for me. I had a faulty front USB port and contacted customer support not really expecting much but they responded to me right away and within 24 hours they sent me a replacement cable via FedEx International Priority. Extremely happy with Lian LI's support, they'll be the first ones I look at when I replacement my main desktop Phanteks case. That company never replied to me when I had a faulty fan hub in my Evolv X, so thank you Lian-Li!

Pros: This case is just awesome in every single aspect. Love the portability and ease of use. Screwless panels throughout the entire case.

Overall Review: I would recommend this product to anyone with the intention on building a small portable itx PC.

Pros: This case is small enough to be in my living room while being easy to install hardware in when you compare it to the super small itx cases. My rtx 2080 fits in with plenty of room to spare. With just two 120mm fans and big intake for the gpu I feel comfortable gaming for hours.

Cons: My complaint isn't the cases problem but my corsair sf600 psu came with short cables so i had to use cable extensions to keep the case clutter free. The problem is the cable management gets chunky in the back panel and the clips that hold the panel wont hold if you dont get things tight to the frame. So look for a sf power supply that has normal lenght cables or can get replacements