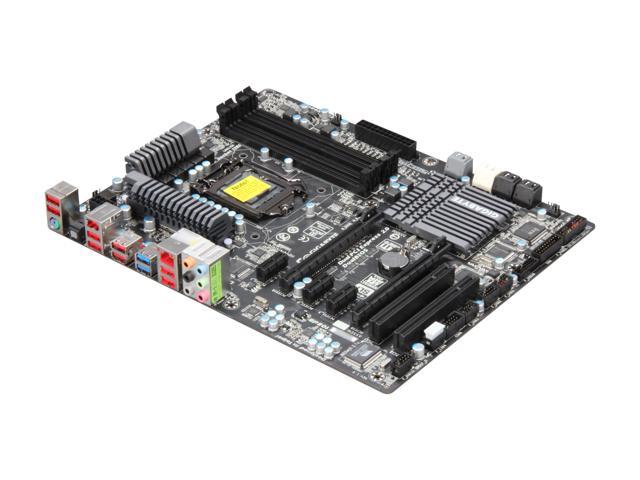 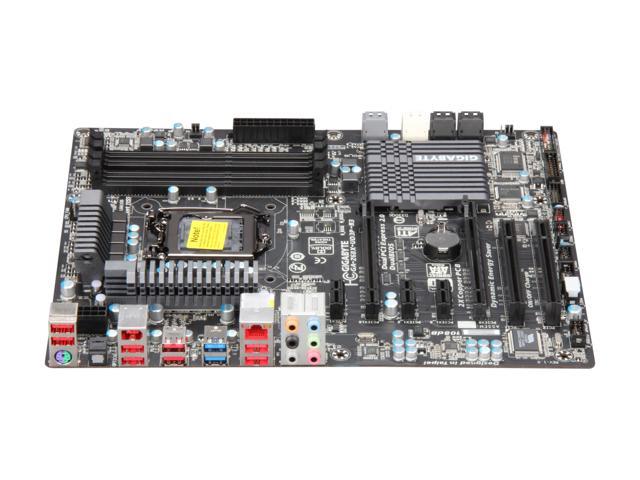 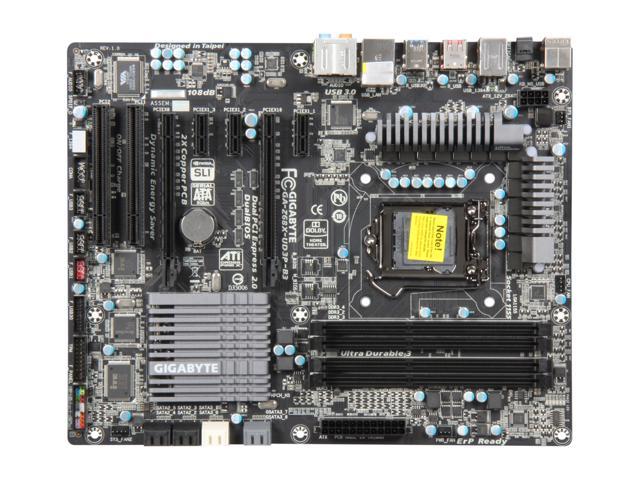 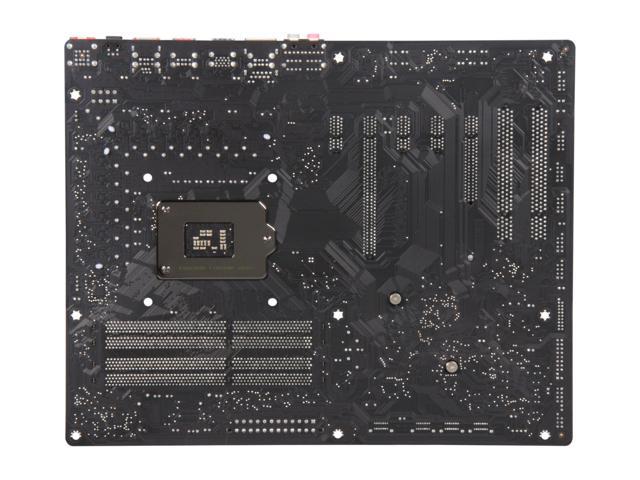 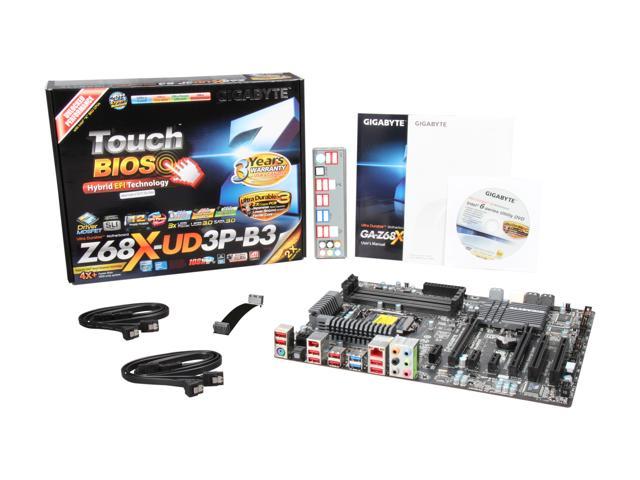 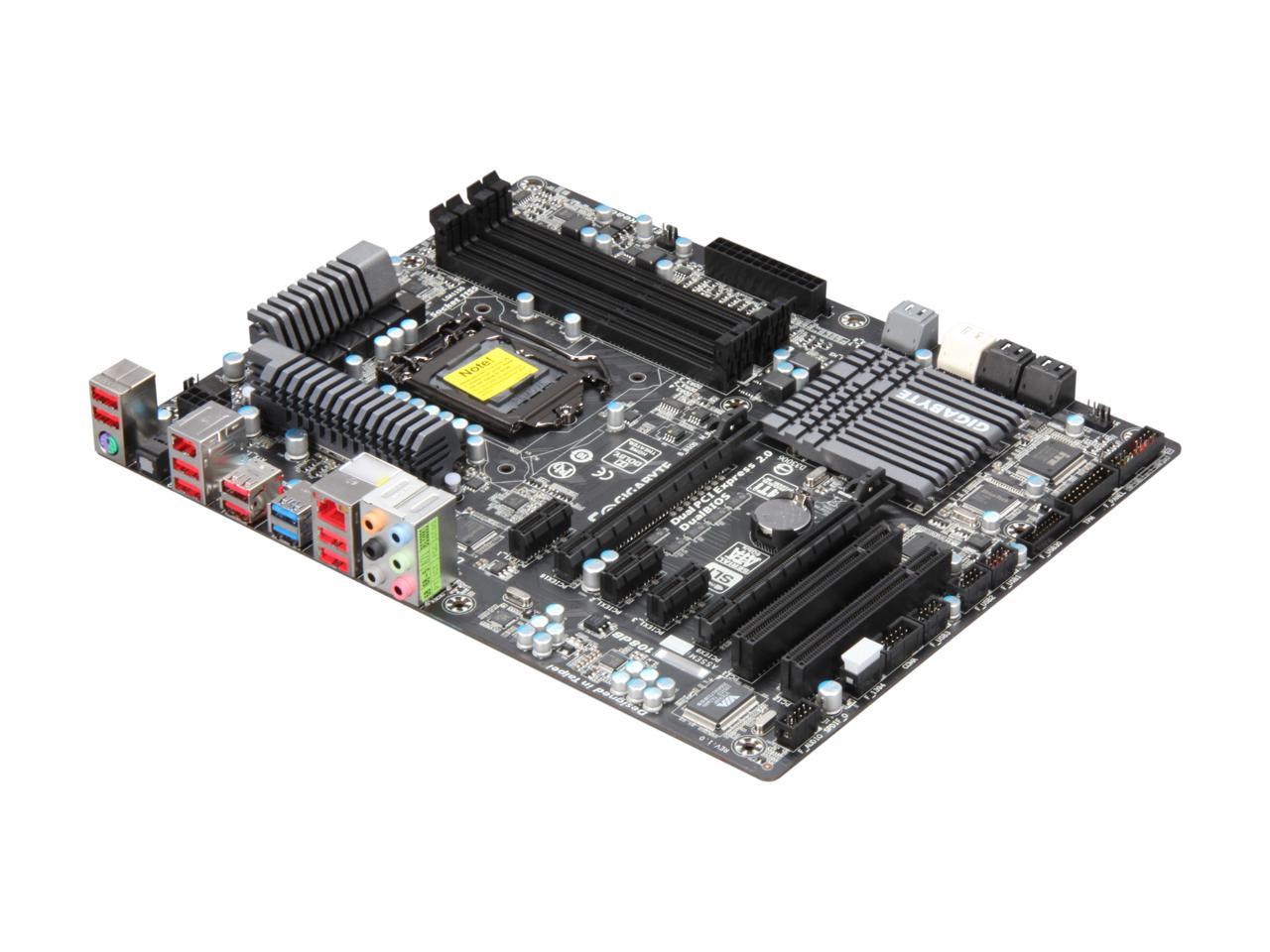 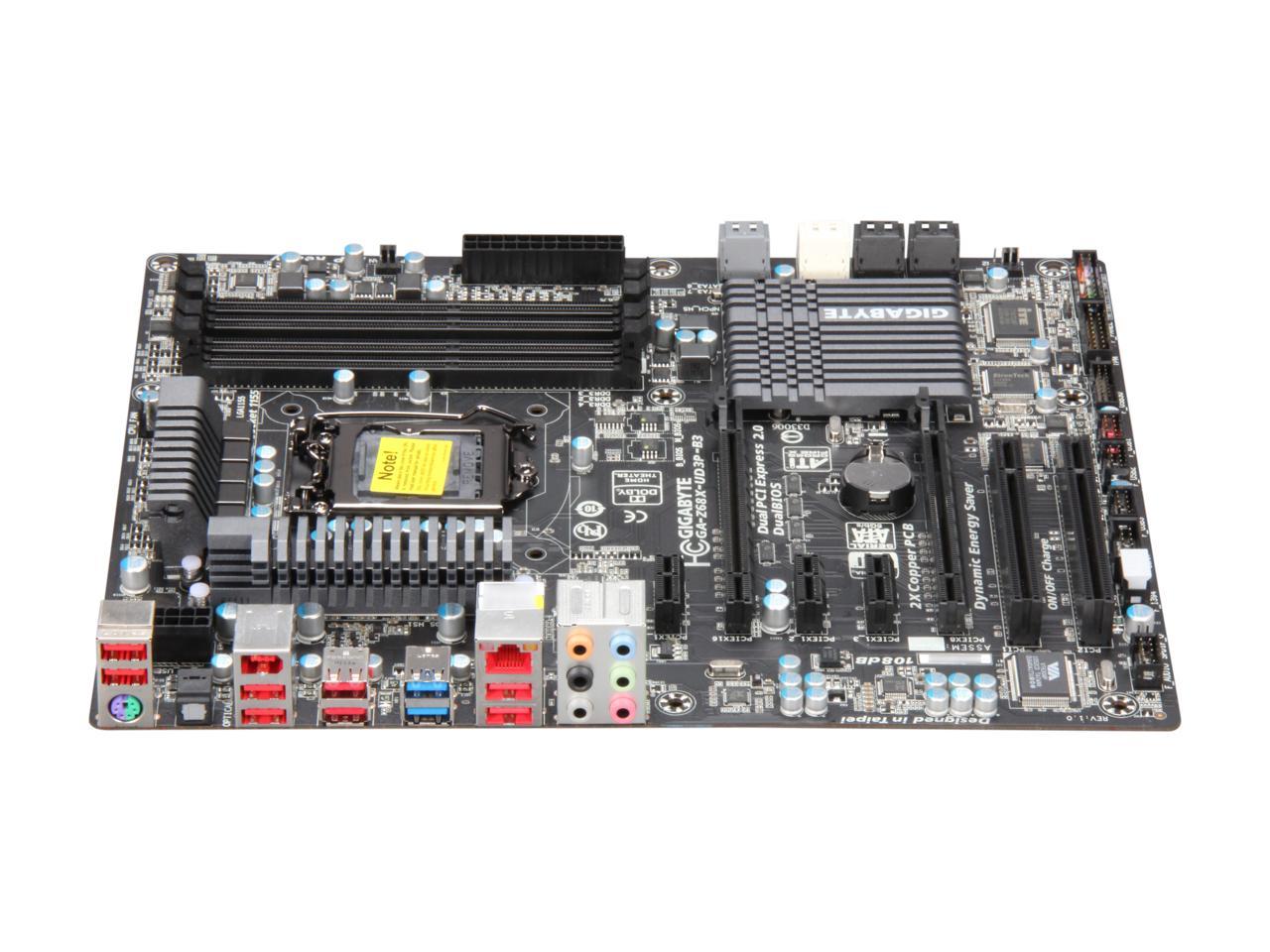 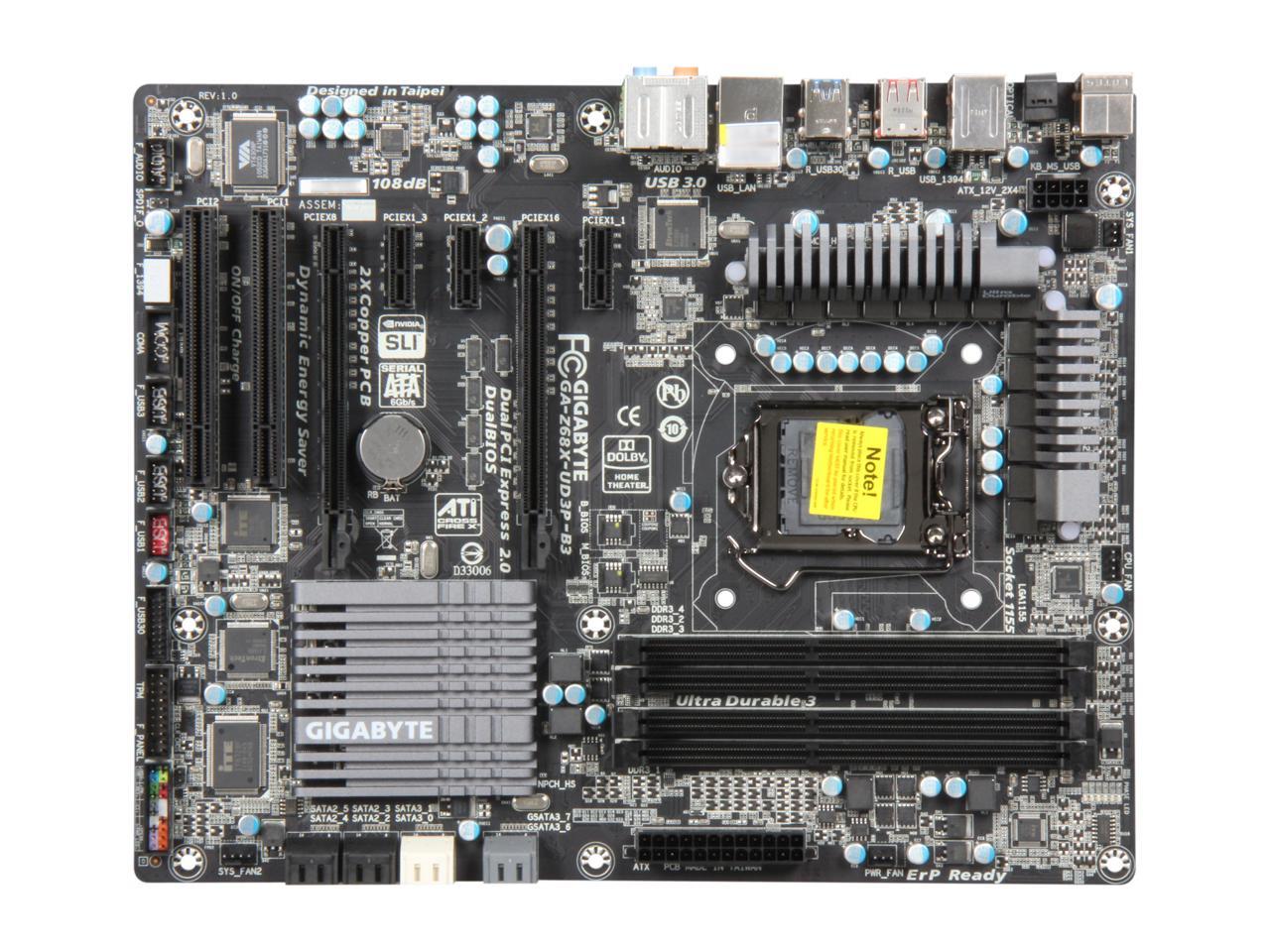 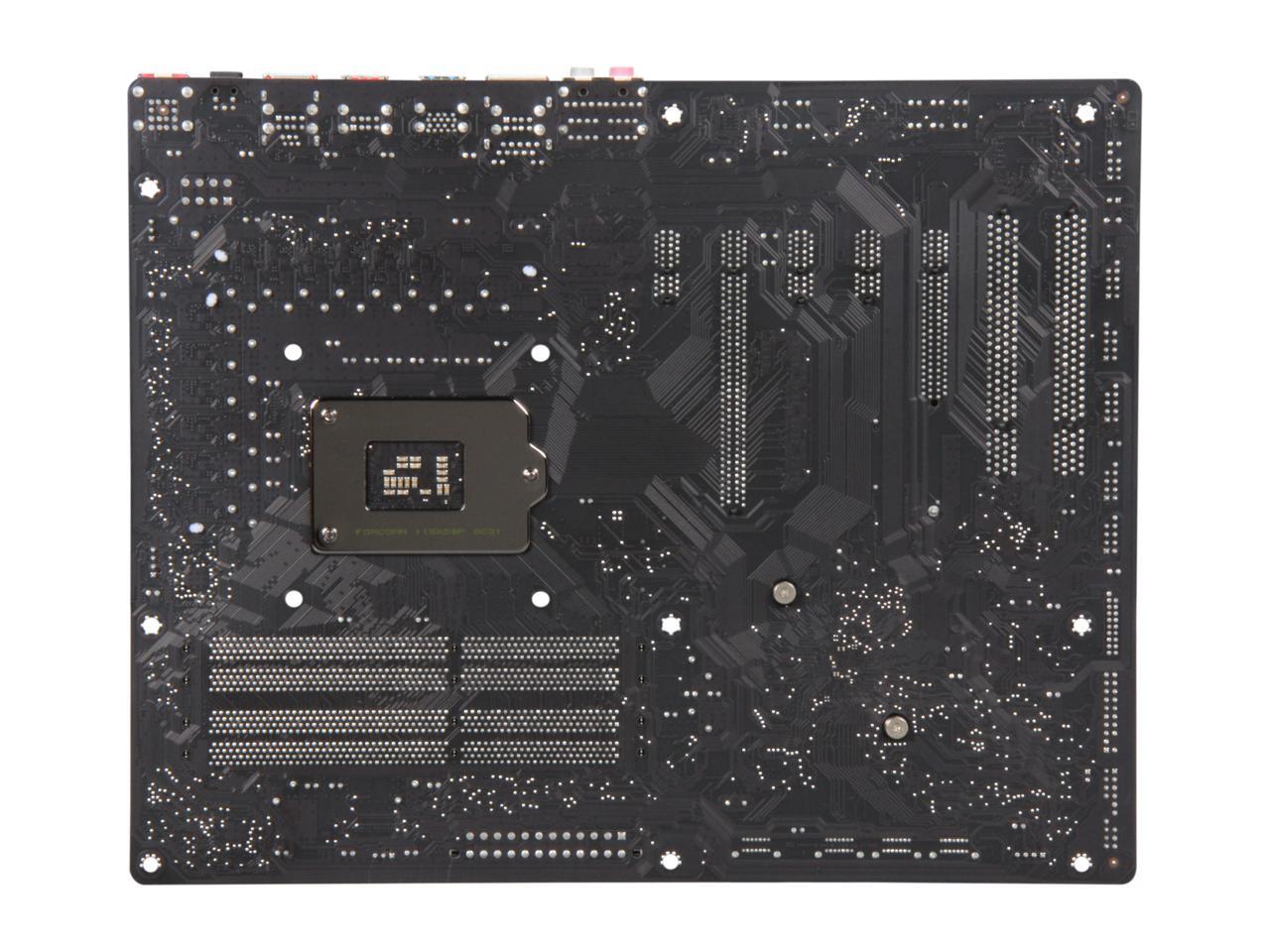 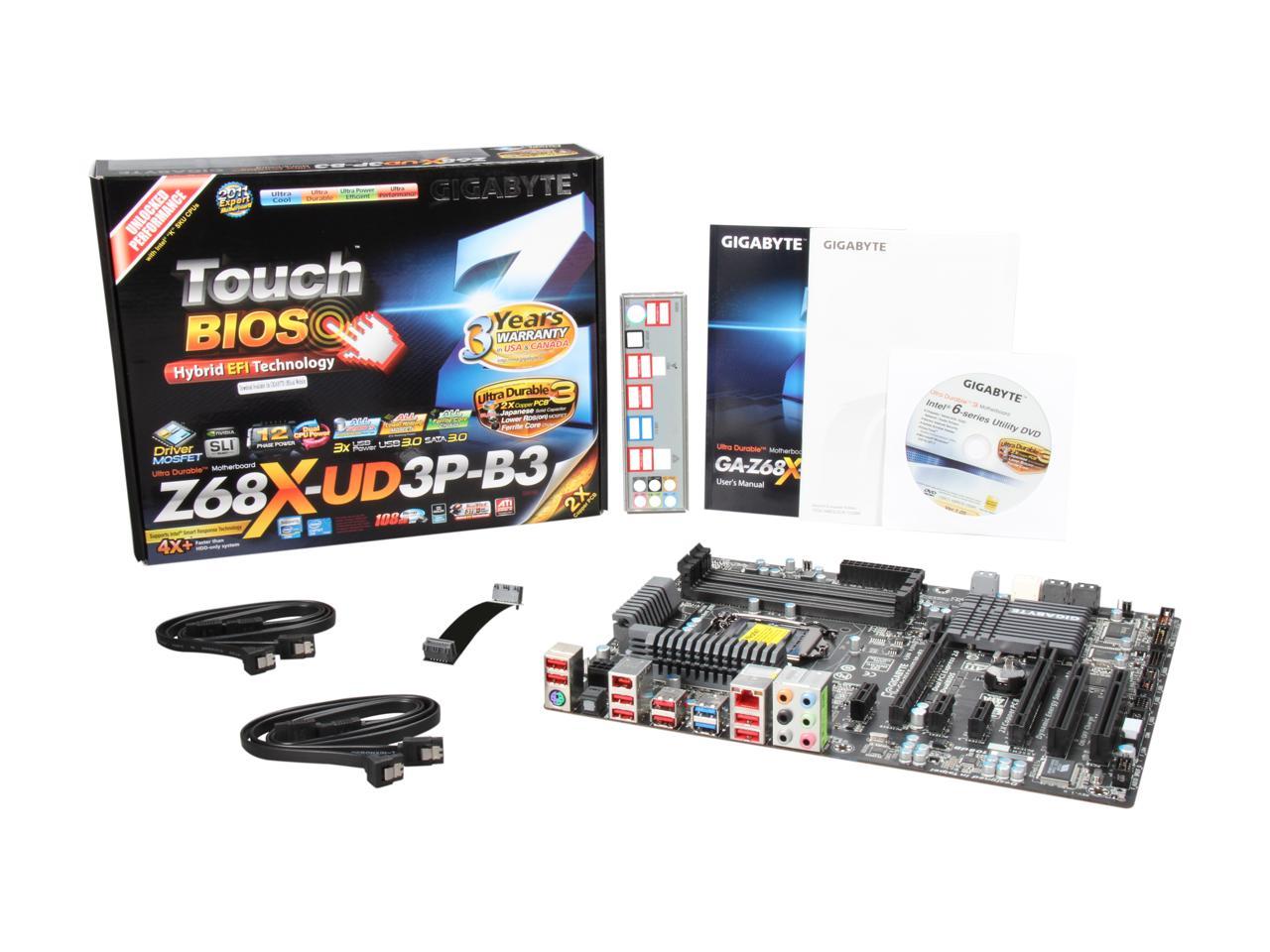 (31) Write a Review
OUT OF STOCK.
Overview
Specs
Reviews
Unleash the potential and drive your system to the limits with the GIGABYTE GA-Z68X-UD3P-B3 motherboard. Like Gigabyte P67 series, this motherboard provides advanced overclocking features including increasing processor core ratios, increasing DDR3 memory ratios and increasing power and current limits. And now it newly introduces the feature of increasing the graphics core clock speed on Z68 platform for even greater graphics performance.
The Touch BIOS offers you an innovative, brand-new way to modify BIOS setting. Powered by the Intel Smart Response technology, the GA-Z68X-UD3P-B3 can significantly improve your system responsiveness like system boot and application startup. The cutting-edge 12-Phase power design and Dual CPU Power technology in combination with new 100% hardware VRD 12 compliant CPU Power Design and Driver MOSFETs provides pure, ample power supply with maximum stability and reliability. An array of premium features, such as Ultra Durable 3 for lower temperature and improved signal quality, USB 3.0 and SATA 6Gbps for fast data transfer, 3x USB Power Boost for plentiful power delivery to power-hungry USB devices, and Smart 6 which offers smarter PC system management, makes this motherboard a second to none choice for your dream system. Best of all, the support for SLI & CrossFireX multiplies graphics performance to deliver the best possible game experience for hardcore gamers.

Learn more about the GIGABYTE GA-Z68X-UD3P-B3

Pros: I initially read the Xbit review of this board and wondered if I would regret buying it. The board definitely doesn't feel as mature as the Gigabyte P45 it replaced. However it OC's like a champ. My 2600K is rocking 24/7 stable at 5 GHZ, 1.48 voltage. I could OC it much higher, but this is the lowest stable voltage for Super_PI and InterlBurnTest at 5GHZ. I will attempt to OC it higher in my spare time. Pared with an eVGA GTX 580 SuperClock, and G.Skill 1600 DDR 3. Like th Touch Bios feature, still requires reboots to apply changes however.

Cons: Board bios and drivers aren't as mature as some, no built-in video (not a con for me though since I game).

Pros: Have yet to overclock, but this board is superb layout is great, connectors for everything you could want and more.

Cons: WHY Pins for heat sinks cant you just bolt them? I thought mine was defective cause I tap the heat sink and it bent off almost then I realized it was pin, but thats my opinion.

Overall Review: The cake is a lie

Pros: Has been installed for three days. Strong overclocking board with simple BIOS and good instructions. I am not regretting skipping a UEFI BIOS, as I think that if you are messing with settings you should know how to use a keyboard. BIOS was full of detail but not overwhelming, which I like. Excellent amount of SATA and USB, including SATA 6.0 (4) and USB 3.0. Something I did not expect, the charcoal board and black expansion slots fit perfectly well with my whole setup, giving me a beautiful dark theme. Board has been solidly overclocking an i5-2500k for a day a 4.4 Ghz, and has shown good automatic voltage selection and temperatures. A few failed overclocking attempts merely caused the board to reset the CPU to stock frequency, and immediately rebooted itself, while politely telling me about it. This feature is a GODsend, and my single favorite thing about the board. I dreaded overclocking tests that required triple reboots just to reset the BIOS after a failure.

Cons: None. I don't even have small things to note about it. I am thrilled with this purchase. Even the I/O plate went in easily, which never happens.

Overall Review: Board shipped was Revision 1.0, and I have not bothered to flash it. I usually don't flash the BIOS unless things are not working, and once my settings are correct I won't touch the BIOS for years. Not even sure if I have the latest, but probably not. There is NO onboard video. You MUST have a GPU. If you buy a Z68 board though... you probably already do. Just saying. The BIOS lets you save settings as profiles, which allows individual naming of each to differentiate them. This is a big improvement, allowing me to have one setting named 'All devices configured, 3.8 Ghz' and another named 'Stable overclock at 4.4 Ghz'. My last board let me save settings as the highly original Setting 1, Setting 2... I happen to be booting from an OCZ Revo Drive, a 120 GB SSD built onto a PCI-E card. This card pulls x8 bandwidth from the GPU in the first PCI-E slot, which is not really noticeable. The Revo installation was tricky, but doable. Unplug ALL other devices during installation of Wi

Pros: Good price, works perfectly with no issues, great design, looks awesome, comes with good software, could not be happier. If you are still researching for a great Z68 board you can not go wrong with this board.

Cons: The SATA headers are at a bad angle. Hard to attach once the motherboard is installed. If there hadn't been a slot in the motherboard tray where I could get to them from the backside of the case, it would have taken me a lot longer to install the cables. Would definitely install cables before motherboard.

Overall Review: Haven't had it very long, but have been able to overclock my 2500k quite easily. Will update with other thoughts as they happen.

Pros: LOVING the more powerful usb ports that quickly charge my iPhone AND my iPad. Until now I didn't think charging an Ipad was possible on a PC. These ports will also charge while the machine is off. Very cool. Plenty of USB2 and 3 ports. Great over-clocker Connections and things nicely laid out I have no issues with the on-board sound when hooked into nice speakers. (I'm running an X-Fi card though...) Plenty of BIOS options Numerous fan headers in the right places too!

Cons: The software for this board is incomplete. EZ Tune doesn't work, EZ Smart Response won't launch, etc. etc. The only one I really want to take advantage of though is the EZ Smart Response, but for others wanting to use some of the other bundled utilities, be aware a lot of them don't work. (I have read reviews on other Gigabyte Z68 boards and see that many others are also having problems with their software.)

Overall Review: This is still up in the air, but from what I read you have to have on board video to take advantage of Quicksync, which, if this does turn out to be the case, will really irritate me. Gigabyte's site boasts all over that the Z68's have this feature and Newegg's own video review clearly states that this particular board does as well. Another reviewer here states he got it working using Lucid's software but if that were the case, why wouldn't Gigabyte give us the software or have it available for us to download? I really hope this reviewer is right, as Quicksync was one of the reasons I went with Z68 and I would have ordered a different board if you had to have on board video to take advantage of it. I have 2 support requests in at Gigabyte. I'll edit this or do another review once I learn more. HAF932 - 2600K - 8gigs Ripjaw DDR3 1600 - (2) GTX 470 SC's- X-Fi Fatal1ty - Z5500's - 28in Hanns G LCD, Intel X-25M 80gig SSD, 640 & 1Tb WD black, etc, etc

Cons: can't adjust chasis fans speed in EasyTune utility,why Gigabyte???,please fix this.at first it was kinda treaky to anderstand bios,but when i got heng of it it is very good.this is not enof to take the egg of,because i love what Gigabyte is doing.

Overall Review: i wish Gigabyte would start using better on bord sound,i had to buy creative sound card to make my games sound the best,one more thing people complain about this mobo,because they havent learn how to use bios,on this bord you have to adjust everythink in the bios manualy,for exemple in the bios if you use C1 and speed step technology make it enable don't trust AVTO,just do everythink manualy and you will be amaized how good this bord actualy is