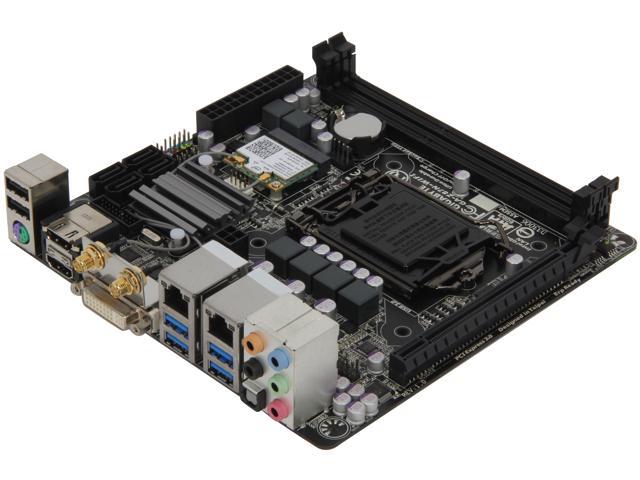 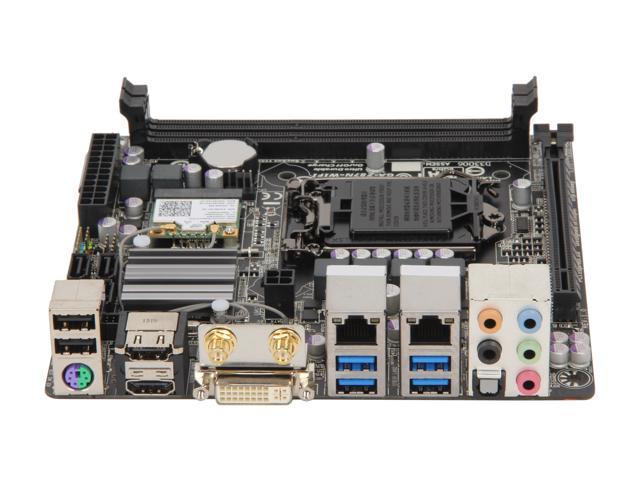 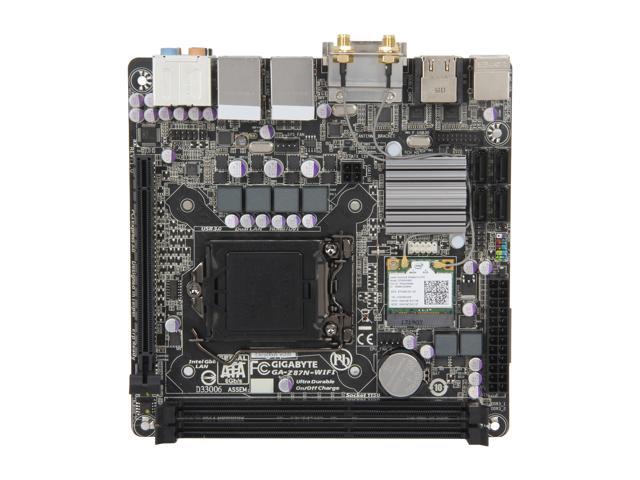 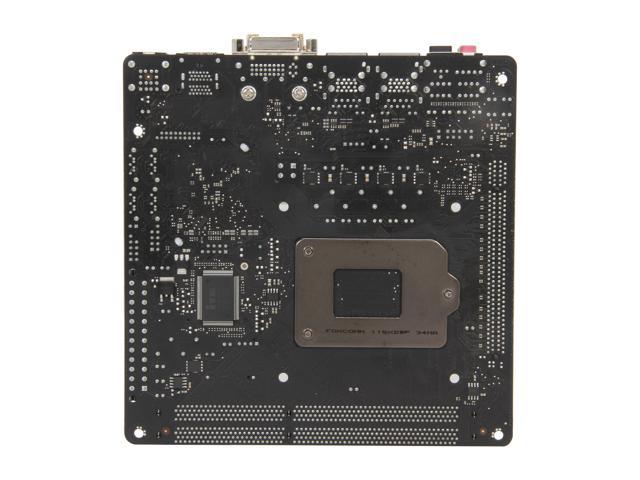 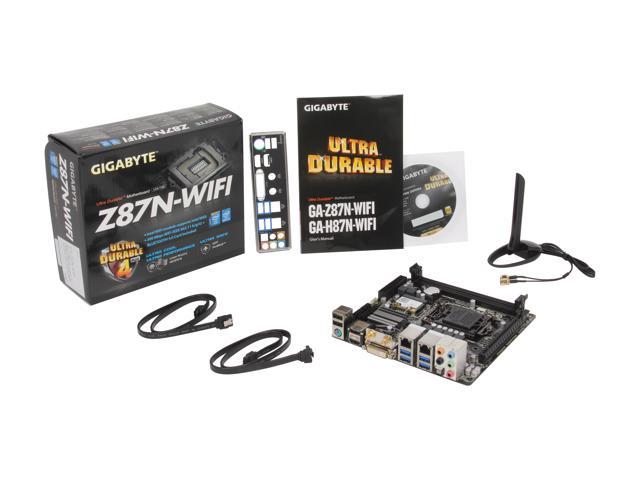 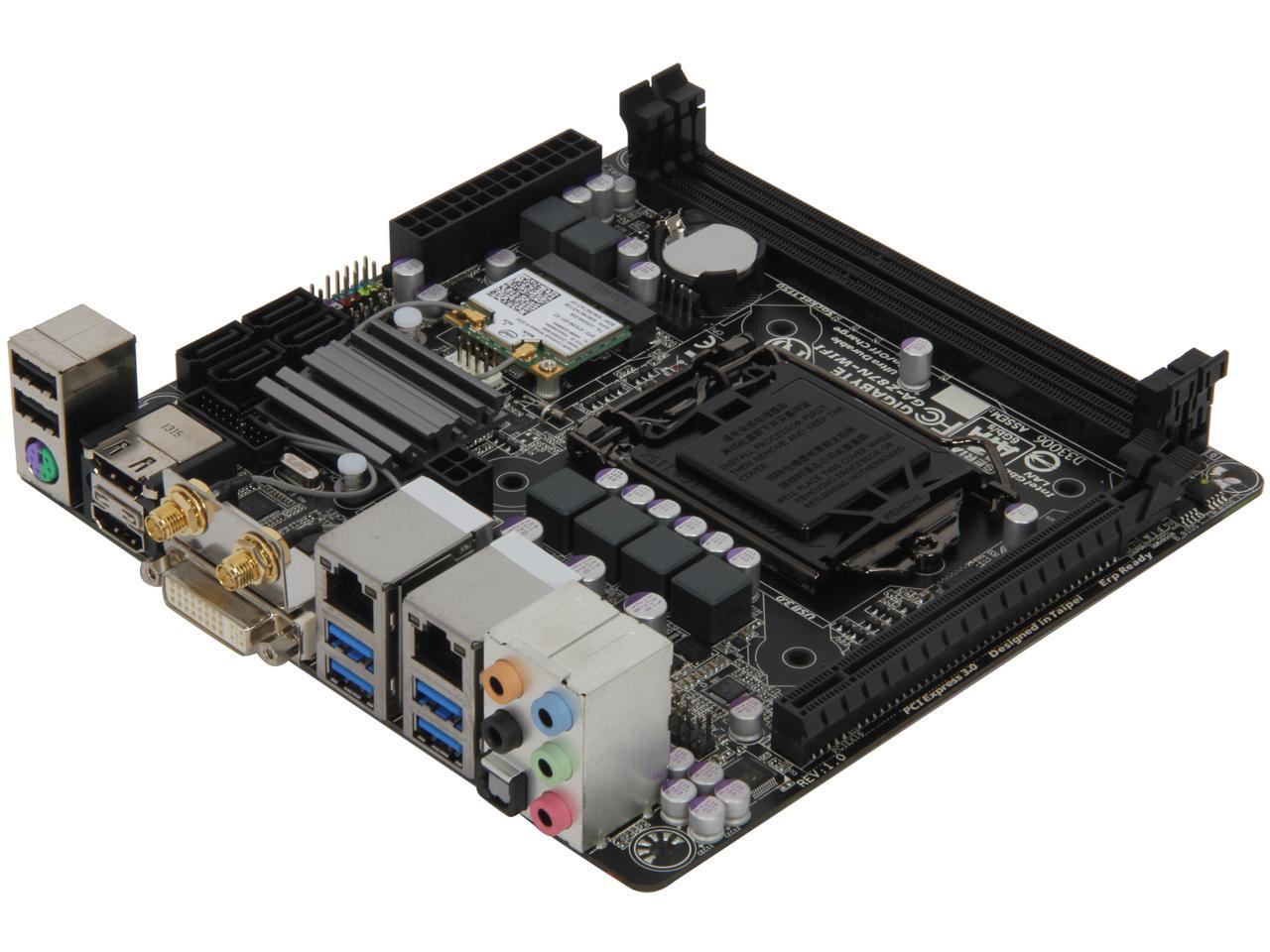 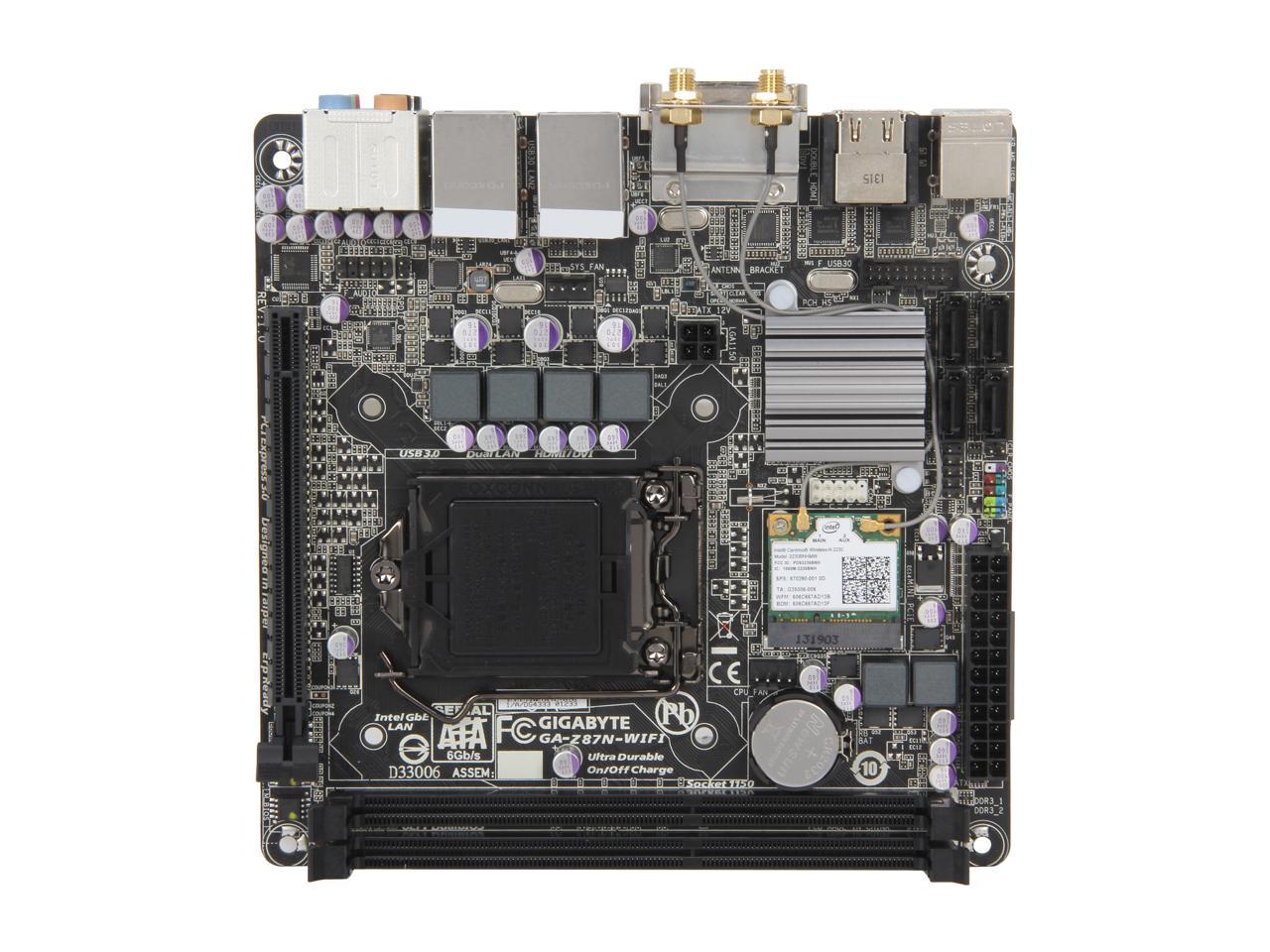 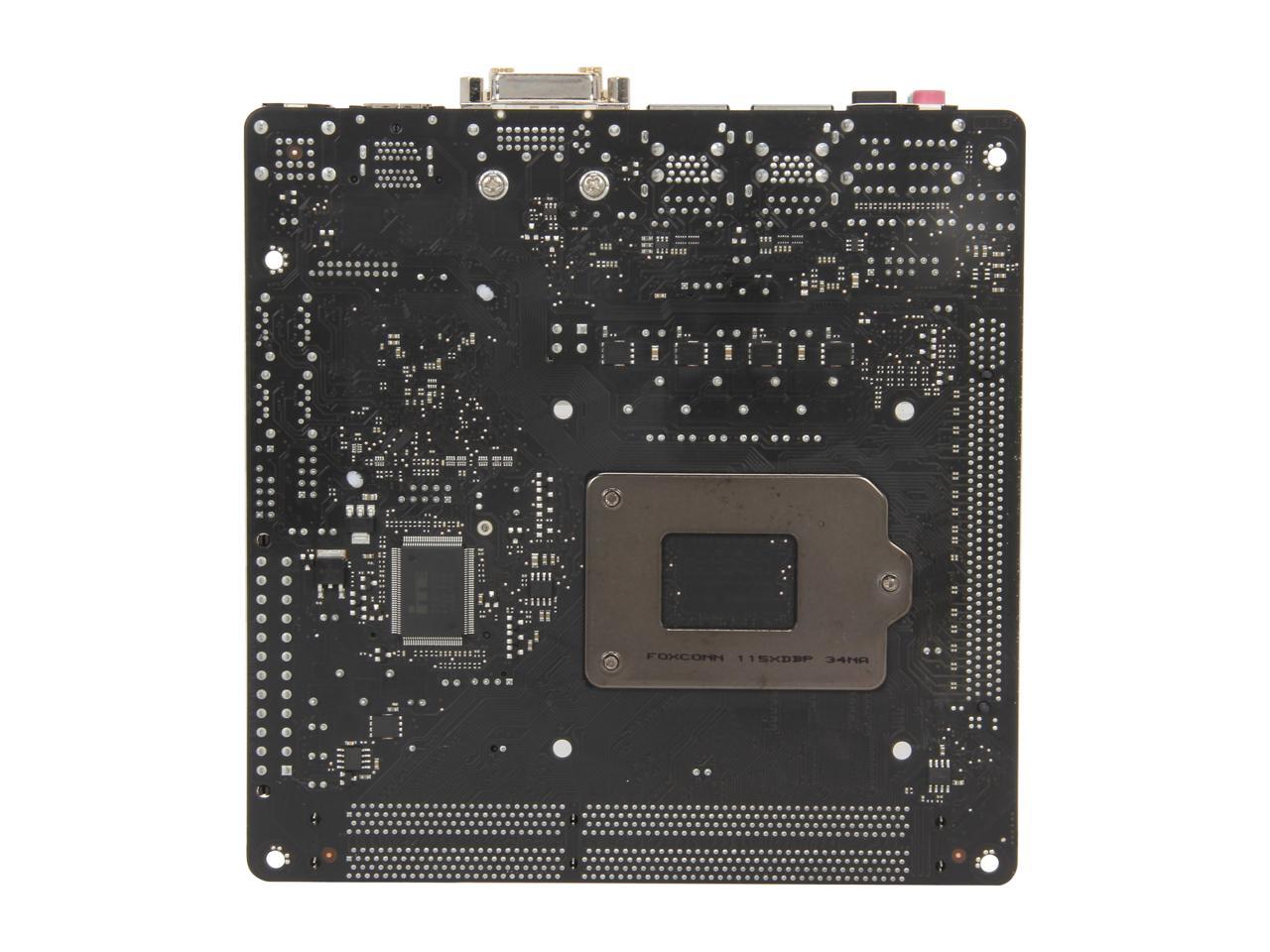 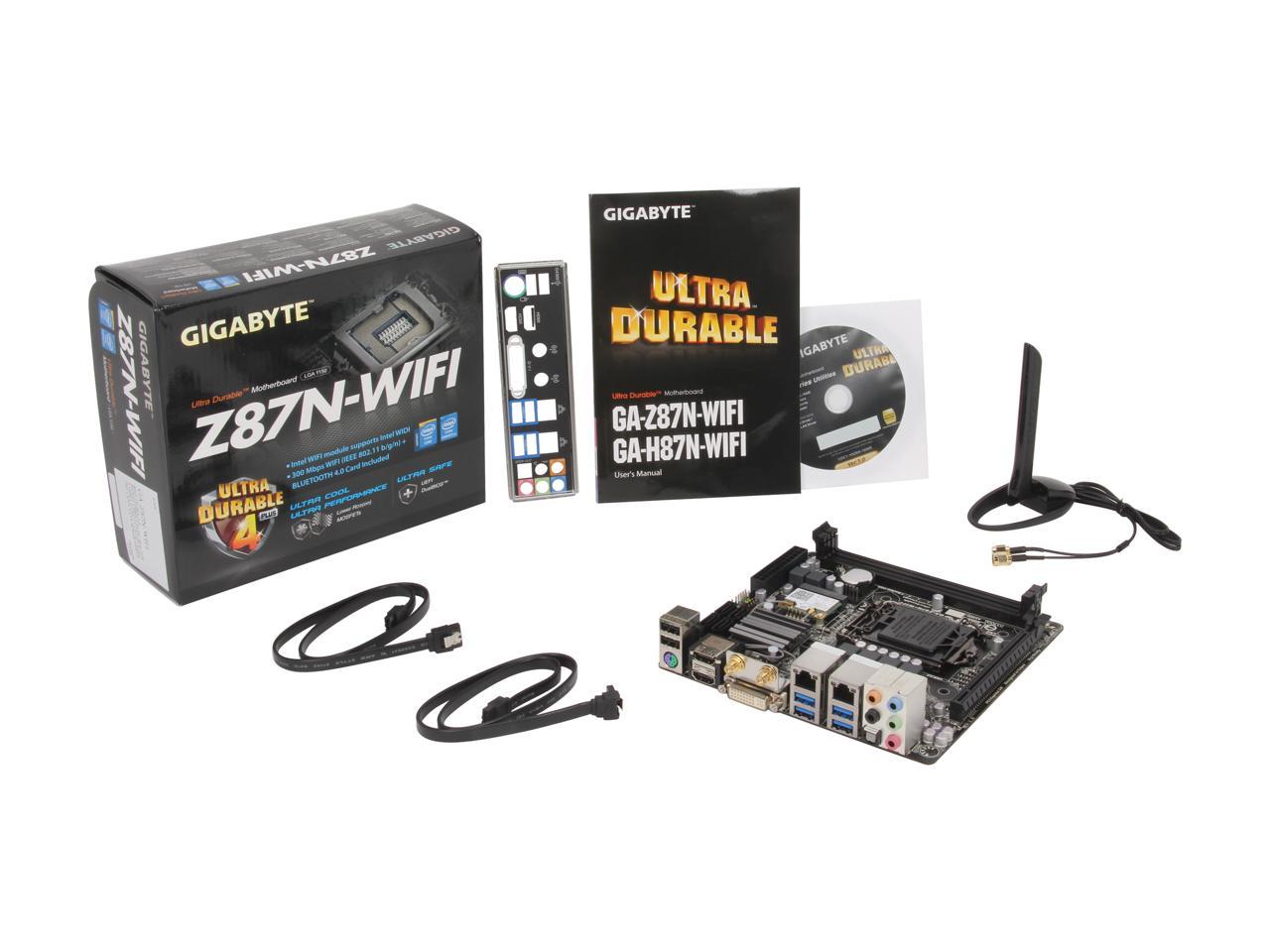 (58) Write a Review
OUT OF STOCK.
Overview
Specs
Reviews Experience the flexibility and convenience of the integrated Dual Lan function.

HDMI™ is a High-Definition Multimedia Interface which provides up to 5Gbps video transmitting bandwidth and 8-channel high quality audio all through a single cable. Able to transmit superior, uncompressed digital video and audio, HDMI™ ensures the crispest rendering of digital content up to 1080p without the quality losses associated with analog interfaces and their digital-to-analog conversion. In addition, HDMI™ is compatible with HDCP (High-bandwidth Digital Content Protection), allowing the playback of Blu-ray/HD DVD and other protected media content.

DVI-I (Digital Visual Interface) is a video interface standard designed for carrying uncompressed digital video data (both digital and analog), and to maximize the visual quality of digital display devices, such as LCD monitors, digital projectors, and so on. In addition, the DVI interface is compatible with High-bandwidth Digital Content Protection (HDCP). GIGABYTE motherboards feature GIGABYTE DualBIOS™, an exclusive technology from GIGABYTE that protects arguably one of your PC's most crucial components, the BIOS. GIGABYTE DualBIOS™ means that your motherboard has both a "Main BIOS" and a "Backup BIOS," making users protected from BIOS failure due to virus attack, hardware malfunction, improper OC settings or power failure during the update process. GIGABYTE 8 Series motherboards come equipped with a gold-plated CPU socket, which means that enthusiasts can enjoy absolute reliability and longevity for the CPU socket overtime, without having any concerns about corroded pins and bad contacts. Learn more about the GIGABYTE GA-Z87N-WIFI

Pros: Amazing CPU Overclocking (4670k at 4.8 Ghz stable, 5.1 Ghz validation) Beautiful BIOS The ability to make a custom tab in the BIOS is great. I have all of my overclocking settings in a single tab. Dual LAN if you need to bridge your connection through LAN Good integrated audio Never have to reset the CMOS when overclocking, failed boots are recovered and give you the choice between setting everything to default or entering the BIOS. Dual BIOS so failed flashes don't brick your motherboard

Overall Review: This board was clearly designed with overclocking in mind. As a Mini-ITX enthusiast, I was skeptical of a Gigabyte Mini-ITX board being reviewed as having the best CPU overclocking in the lower price range (There are two highly expensive boards that probably overclock better but naming other manufacturers is not allowed in reviews)

Pros: Sleek look, great design. Prefer BIOS layout over my Asus. WiFi works flawlessly. I stream video all evening with it and haven't seen a hiccup yet. User friendly.

Cons: I like fans. not many connectors, but i knew that goin in.

Overall Review: Worked great with an i5-4430 for an HTPC. Everythign was simple to setup.

Pros: Built for customer, had everything a normal user needed and then some. Love the durable caps they install on these boards. I find bad caps as the cause of so many electronics failures. it’s nice to see a board manufacture do something about this. Good price to performance

Cons: PCIe cannot be used with anything other than a GPU. I tried for several weeks to get a Ceton Infinitv 4 (and Infinitv 6) to work. I sent the cable card tuners back and bought a HD Homerun prime. The machine works flawlessly ever since.

Pros: I have to say, the second I opened the box, I felt like I was holding a beast. Tough little motherboard! Very important for those buyers who want some quality. Where do I start.. - 2133mhz ram support, awesome! Contrary to some other reviews. - VERY SIMPLE BIOS. Seriously, for some of you other users, this is a godsend. Restarted after a fresh windows install, delete delete delete delete delete.. BIOS. Click, click.. 2133 frequency. Select. Done. Profile made. - WiFi? Cool feature, really like it. I take this thing places, and it's a nice touch. - Great peripheral interface. Tons of USB3, USB3 header and USB2 header adapter, HDMI, DVI, WiFi, and PS2 for you older uses.. - Great support from Gigabyte, I found their site very simple and easy to navigate. I downloaded the drivers needed, and was on my way! Why I choose Gigabyte. Well, I've had an Asus board before, loved it! But the only ITX board that I wanted to get was an LGA 1150 (Since I got a processor courtesy of Intel) and it wasn't reviewed very well.. And it was pretty expensive. I was aiming for a rig under 600$ (I already have this and that laying around) and even though I went over, I'm glad this board was so kindly priced.

Cons: The installation guide, every time. You know when you're almost done with everything and it's time to attach the power button cables, and hdd leds? Yeah, that time. I have no idea where they got the diagram for the motherboard.. But it's nothing like on that actual motherboard. However, no egg dock if you're like me and you've done this a time or two you know what to do! It's basically the same. NO "POWERED BY GIGABYTE STICKER". What the hell man. Get it together Gigabyte. I need that, and I haven't gotten a response from their website about it, maybe they think I'm joking but it's a big deal ;]

Pros: Intel wifi/bluetooth. Really fast wifi card. This motherboard is probably the best motherboard for this price range. It overclocks like a dream.

Cons: The CPU socket and 4 pin connector are located in probably not the most optimized area. I would like to see the CPU socket more towards the middle as there might be interference with aftermarket heatsinks.

Overall Review: I dont know why they do not advertise this motherboard as much, it is such a great motherboard for the price. It is my first Gigabyte motherboard.

Pros: Newegg sent me Rev. 2 even though the board listed here is rev. 1 Rev. 2 has built in wifi AC!

Pros: Well..I've been building systems for about 25 years now, and I do it often, with many different vendor's etc. I gotta say, I am pretty impressed with this board! This is my first GIGABYTE experience, and it was pretty seamless. Running a simple Core i3, no overclocking, and some basic 8GB of memory, with W7 64-bit. I updated the BIOS, downloaded drivers right off GIGABYTE'S website, and things work perfect! Folks...PLEASE make sure if you are having issues you have updated the BIOS and have the right drivers installed for the board!

Overall Review: I wanted to note that I am SUPER impressed with the WAN speed on this thing. I don't know if it's the antenna or what, but the WiFi is literally twice as fast as my Core i7 that is connected to my router via the LAN. WOW! Great job on that part GIGABYTE!