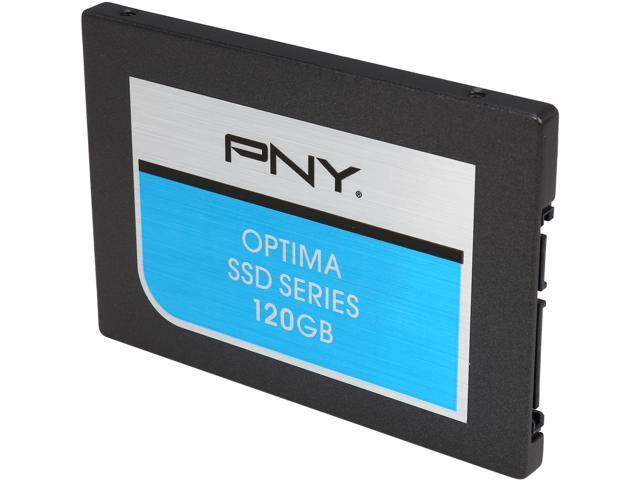 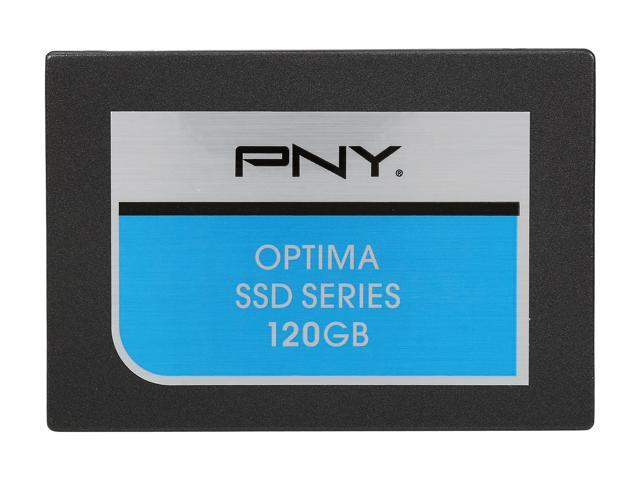 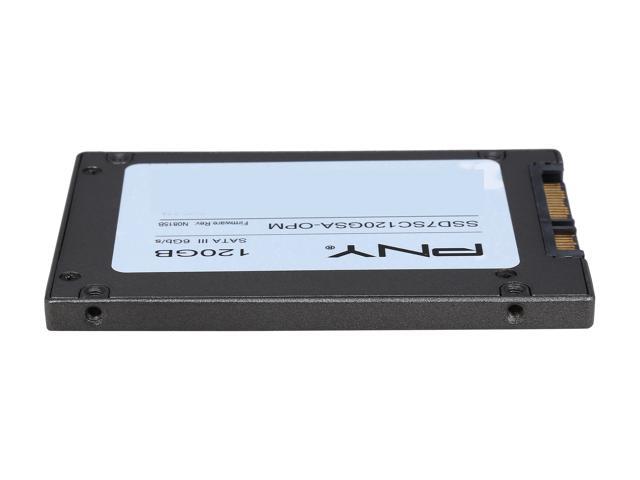 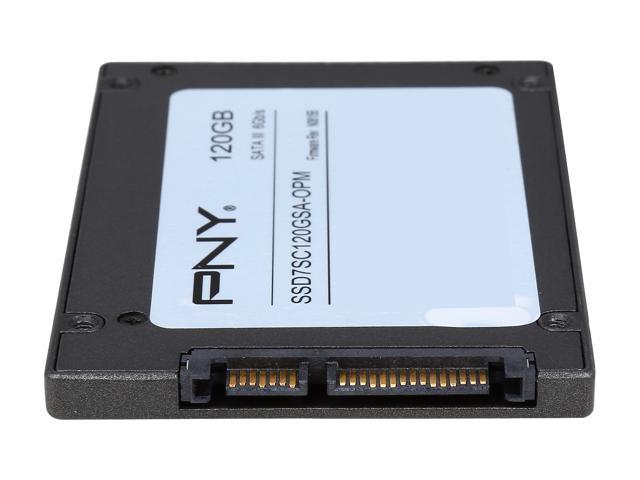 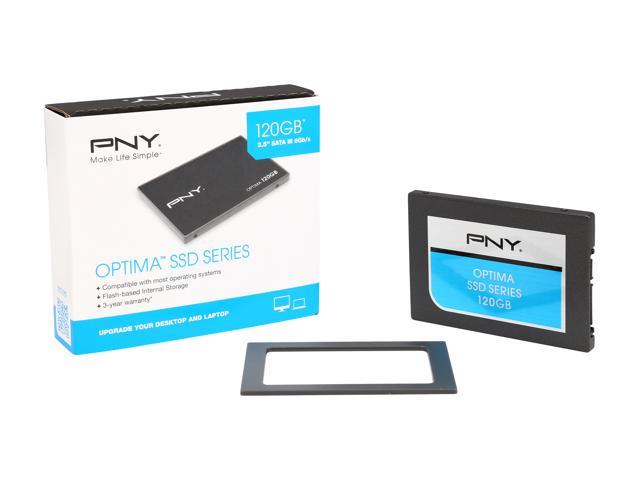 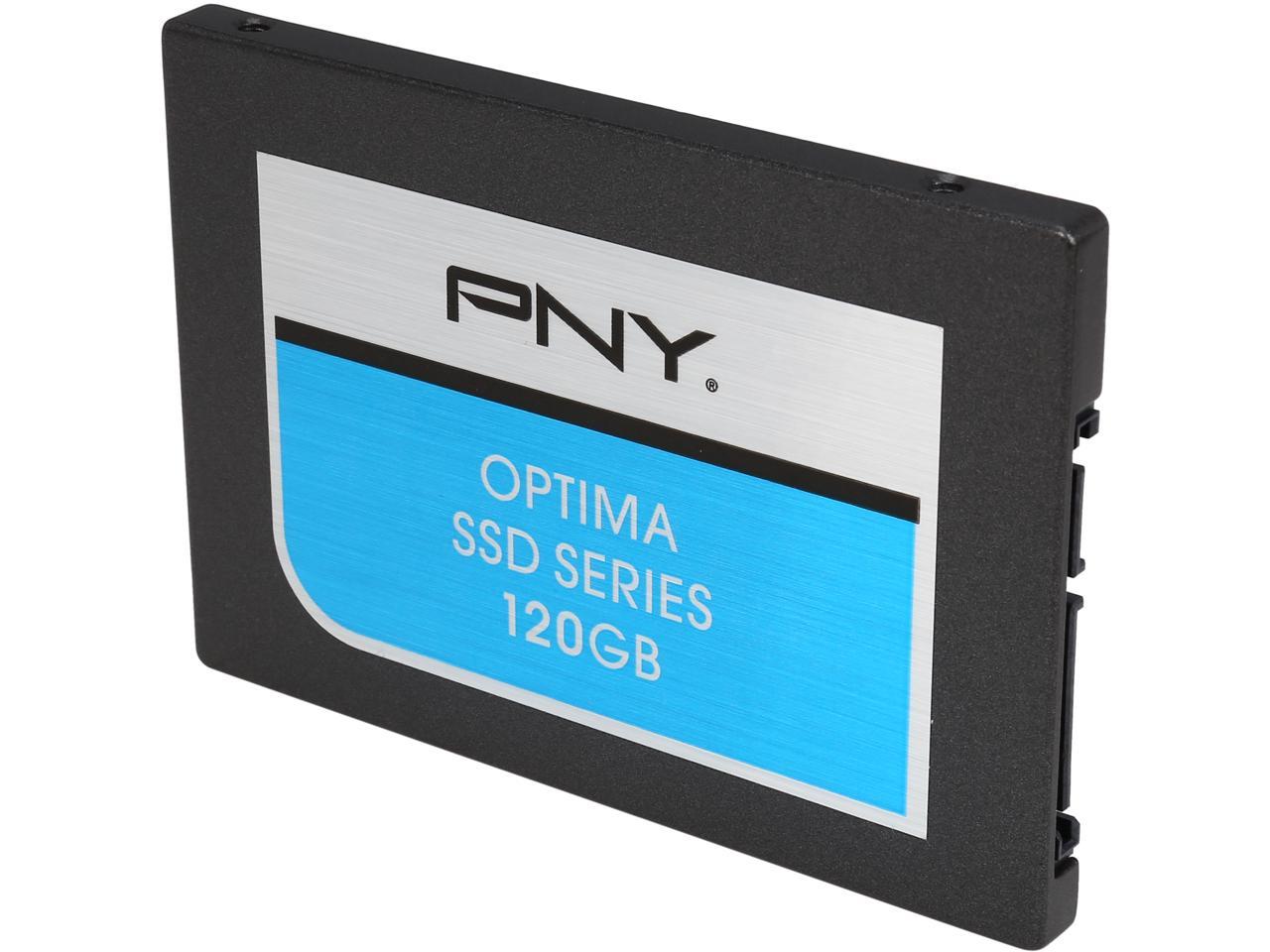 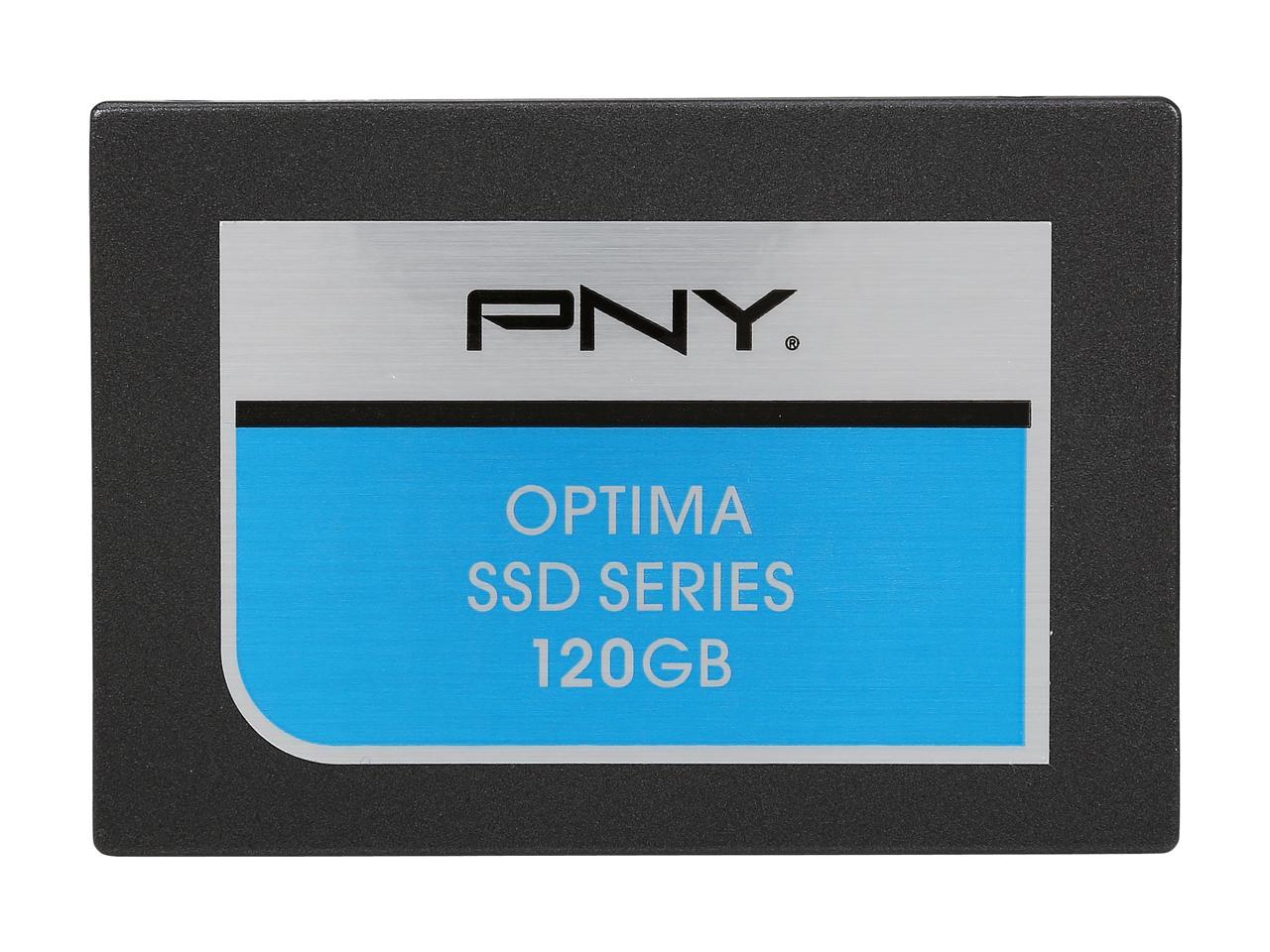 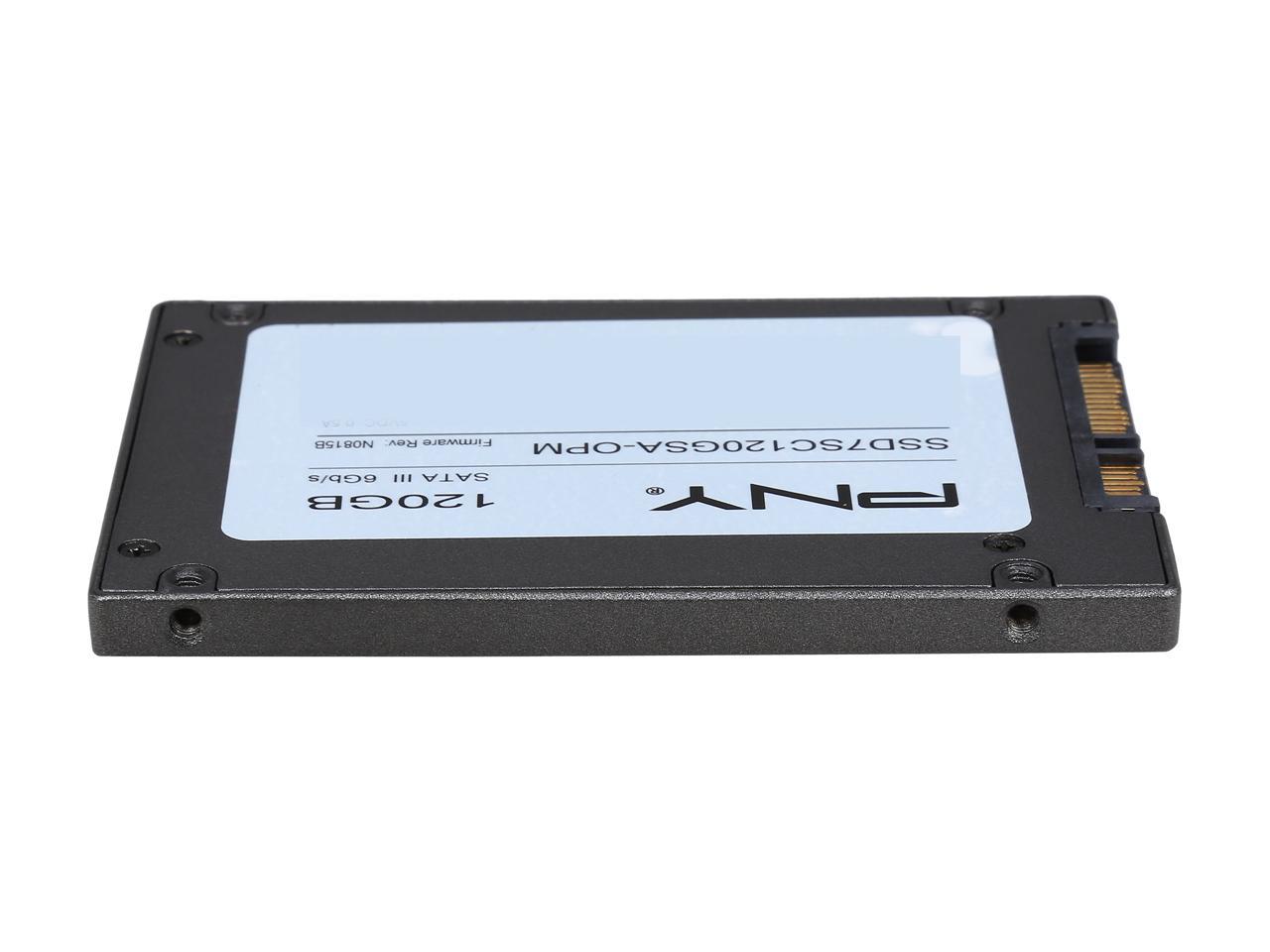 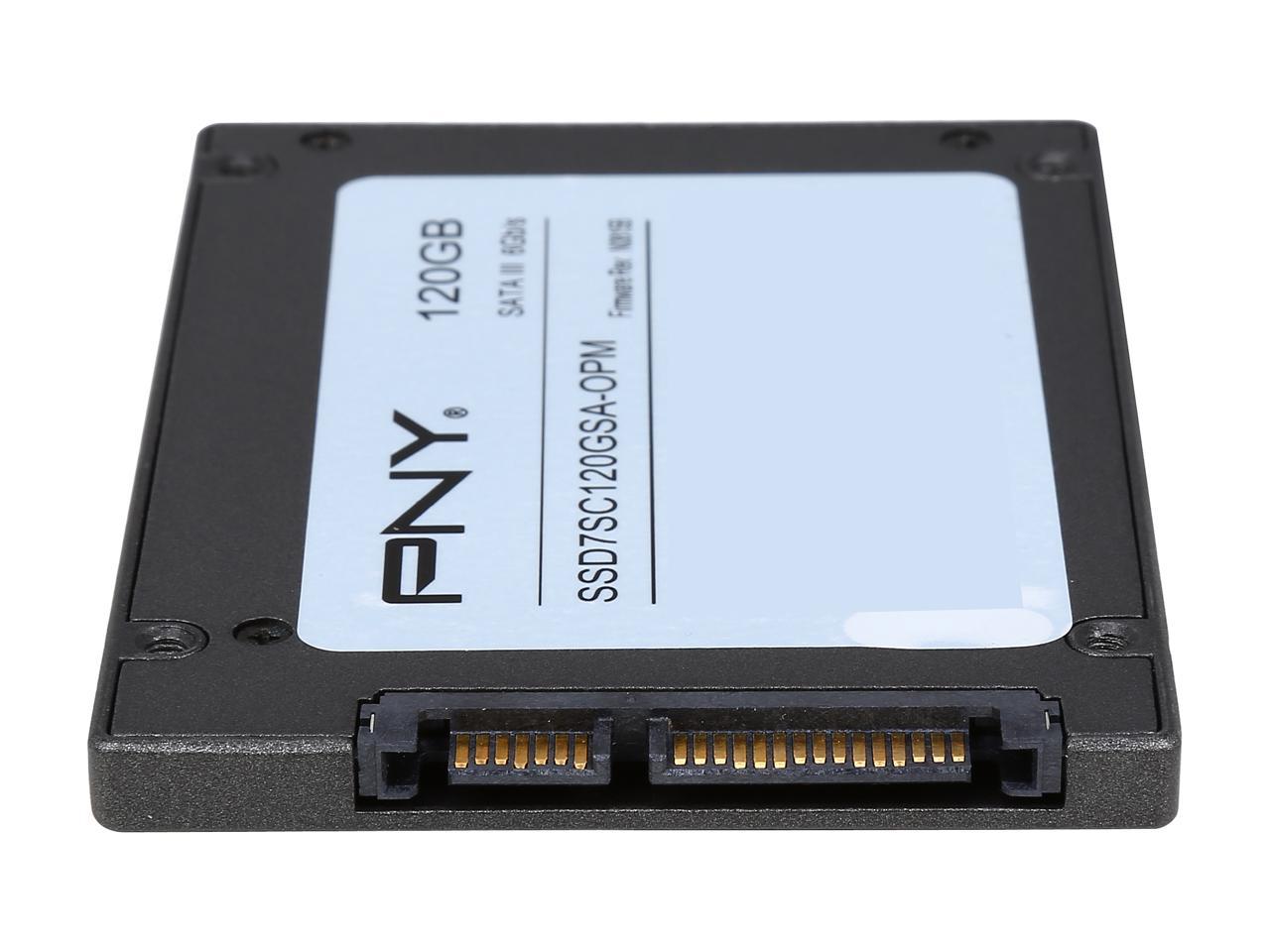 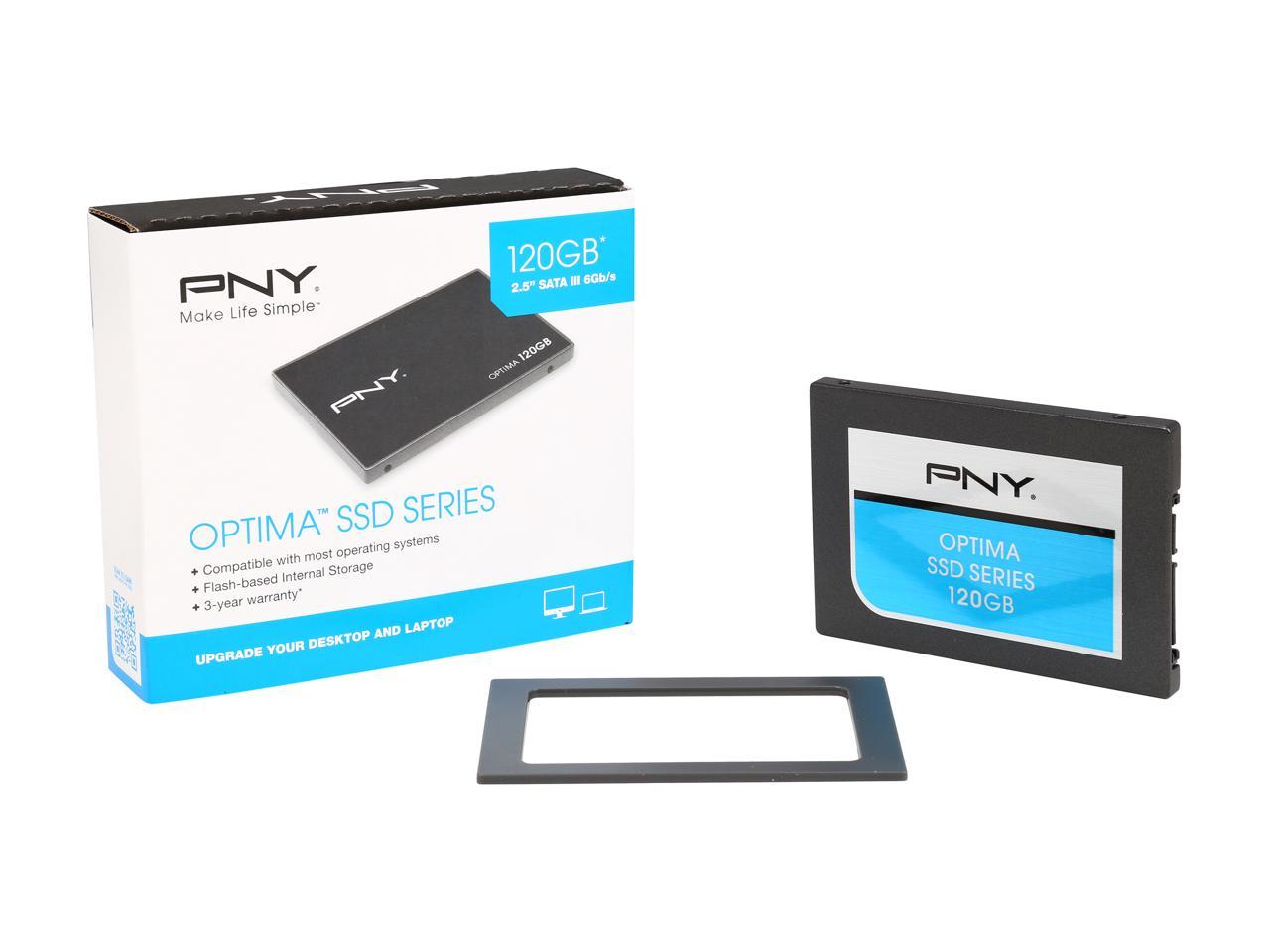 (226) Write a Review
OUT OF STOCK.
Overview
Specs
Reviews

Our next generation solid state drive (SSD) is designed to meet the increasingly demanding needs of the mobile computing market. These SSD's are designed to offer long lasting, high performance storage designed for gaming, photo/video applications and faster system performance.

Optima™ SSDs are an entry-level drive that doesn't compromise performance. These drives feature a 2.5" SATA III, 6Gbps interface, support encryption and are capable of launching multiple operating systems and programs in seconds while preserving data longer. Optima™ greatly reduces power consumption and is offered in a thin a 7mm form factor (includes a spacer to convert to 9.5mm), lightweight packaging with capacities from 120-480 GB.

The PNY Optima™ SSD line utilizes multiple qualified controllers to offer the best available solution to our customers. This flexibility allows us to stay very com?petitive in the entry-level SSD market, offering customers quality solutions and service at a price point they can utilize to their advantage.

Pros: To eric k. : If you do a fresh install of Windows on your SSD there should be little difference in performance when the SSD is connected to a SATA II port or a SATA III port. This is because Windows and most programs start and run by opening and saving a bunch of small files, and SATA II handles that almost as well as SATA III. On very large file transfers or massive game loading the SATA III connection will show its faster speed. Otherwise, SATA II is very good.

Cons: the PNY firmware tool will not see this drive at all.

Overall Review: I just ran the tool as this is pretty new I don't think it needs a firmware update but wanted to check. Downloaded tool and installed when I ran it, It said I didn't have any drives installed. I hope they get there software fixed and I hope they make a ssd toolbox like other companies. So you can manually run trim and see life left and so on. As it is working at rated speeds I am not to worried about it now but after using many other SSD's, coarsair, Samsung, they all have toolboxes. Kingston doesn't but I think they are working on it they do have one that shows life left and so on. On my amd system it did seems a lot slower but found I was using the AHCI by AMD so I deleted it and used Microsoft's AHCI drive and saw a dramatic increase in speed. So if you own an amd system make sure you use Microsoft's AHCI driver. If you also own a amd video card when you install the graphics driver it will automatically install the amd AHCI driver. If that happens go to device manager and ide channels and find the AHCI and go to properties then just roll back driver.

Pros: Ok, I picked this up on a sale, with no other reviews. Gave it a shot and am happy I did. I didn't run any benchmarks, but for my general use, it's much faster than the Western Digital Caviar Blue 64GB SSD that it's replacing. Firefox, Chrome, LibreOffice, GiMP and almost every program I installed on it ran quicker. It also scored 7.9 on the Windows Experience Index on Windows 7. I'm using an AMD 990FX board, so make sure to use this on the SATA III ports if you use Intel, as most Intel boards still have a mix of SATA II and SATA III. Other than just working fast, it also installed Windows 7 fast, and as far as I could tell, doesn't get hot. It's a very slim drive and the packaging was basic, but kept it protected. For the performance exibited by this drive for my uses, I feel that even at it's normal price, it's a solid deal.

Cons: TLDR; NONE I don't think it was the fault of the drive, but I couldn't recover my Win7 image from my 64GB SSD, and image it to this one. It kept failing. I've tried over and over, but it did not work. Ultimately I decided to Install Windows fresh on this drive, which was fast. I don't think this was the fault of the drive tho, probably a bad image.

Overall Review: It came with this weird plastic thing. I'm unsure what it's for, possible to give it some girth for certain laptops, as this is a VERY thin drive and might bounce around in some laptops. I haven't had this drive for very long, but the lack of reviews almost deterred me from giving this a chance. I'm glad I did, as this is an amazing deal for a good amount of SSD storage. If this drive ever gives me an issue I will be updating this review, but as it stands this SSD gave me one hell of a good first impression.

Cons: Looks like they switched to "asynchronous" NAND chips - see "Other Thoughts" below.

Overall Review: First Kingston and now PNY have released value-priced SSDs which performed well when reviewed at several tech websites. Using "synchronous" NAND memory chips they achieved pretty good bang-for-your-buck Read and Write speeds. Later, they switched suppliers and began using "a-synchronous" NAND and Write speed performance is clearly reduced by a significant amount. If you're a home user who surfs the internet, do email, play a few games or work with MS Office and similar apps then you'll probably be very happy with the overall performance of this drive because the Read speeds and access time (less than half a millisecond!) remain good and that's what makes an SSD feel fast. If you do serious video editing or other Write-intensive work then you may wish to spend more for speedier Write performance. Hopefully, the next generation of budget-price SSDs will have controller software which can maintain superior performance even with the cheaper asynchronous NAND .... or maybe they'll just use better NAND. We have the 120GB version of this drive. The smaller capacity means there are fewer chips to Write to simultaneously, so the 120GB model is inherently slower than the 480GB model. But, we must have got an early version with the better synchronous NAND because we don't notice any loss of performance compared to our 120GB Sandisk Ultra Plus (another value-priced SSD).

Pros: This is a moderately fast drive but in the 240-256GB SSD category, it's far from the fastest. Once I finally got it up and running, the performance was pretty good.

Cons: I ordered two of these and one was basically DoA. It had 6 SMART categories marked as severe failure and it would intermittently accept data being written to it and then not. After 3 tries I got Windows installed on it and ran a benchmark. I got about 1MB/s and it took about an hour to load Windows. Obviously something went wrong. The replacement drive I got worked fine after I sent the original in for RMA but a failure rate of 1 in 2 is far too bad. I've never had a problem with the newer PNY XRL8 series so I'd suggest sticking with that series instead. I think this series is technically discontinued actually.

Overall Review: I've built and upgraded about 300-400 systems with SSDs and this is one of only two drives that has ever completely failed. DO NOT buy this drive.

Cons: Are you kidding me?

Overall Review: I used this drive in a new build for a customer who was in dire need of a new PC. She had been using and old D...l Windows XP that was running so s l o w and so out of date. This PNY SSD 120 GB was paired with 4 GB DDR3 and an Intel Pentium dual core CPU, and now her new PC starts in 9 seconds flat! Apps pop open RIGHT NOW, and I am amazed at the speed of this little SSD.

Pros: -Synchronous MLC flash (Mircon 20nm) -As fast as the Samsung EVO with better flash -Low power usage, even for an ssd -Cheap!

Cons: -New controller on the market means reliability is still a question

Pros: At this point, none, other than the fact that it was cheap.

Cons: after 6 month of use, from july-dec, it failed so I had it RMA. One came in mail looked brand new sealed. However... this one is DOA. If I were you, I would stir clear of this one and probably any PNY SSDs all together. - First one failed within 6 month - Second one DOA