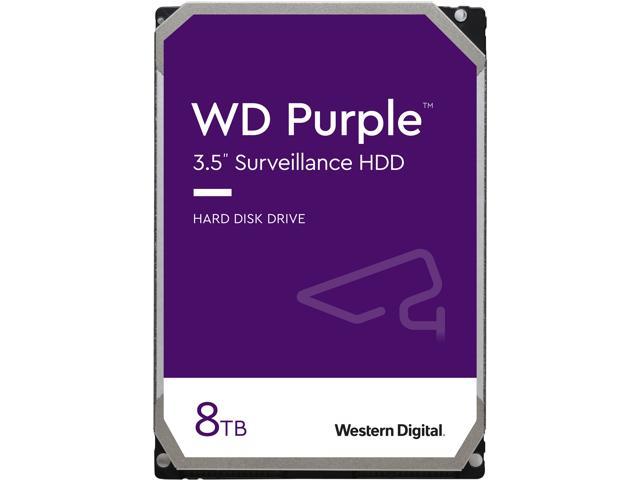 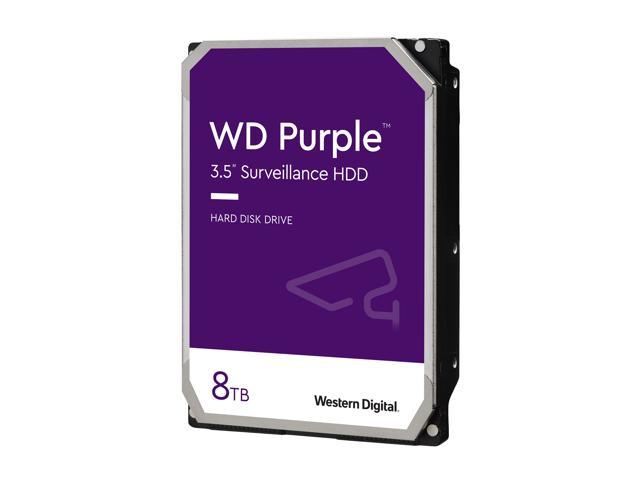 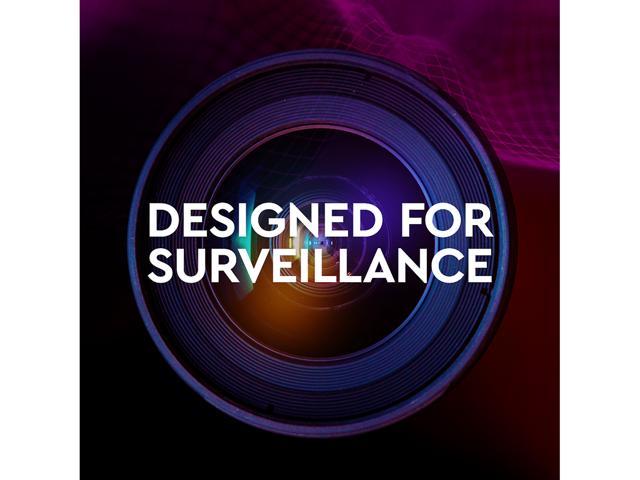 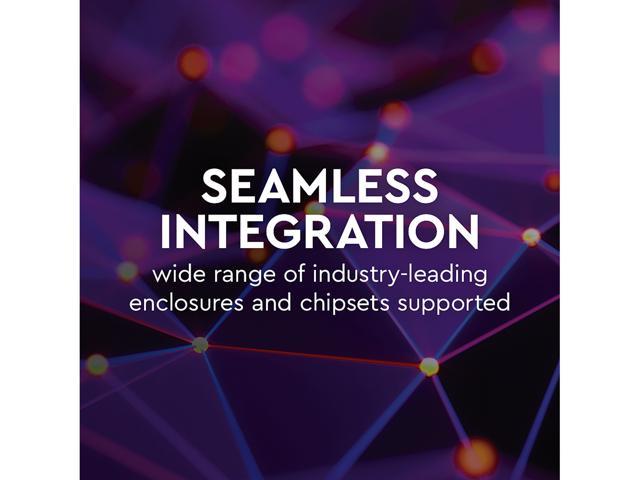 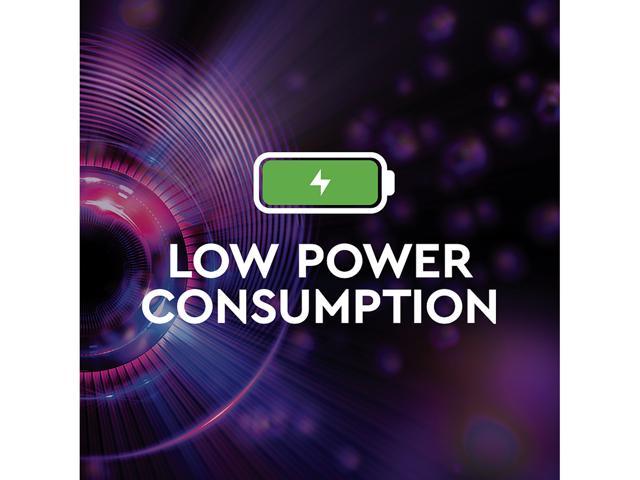 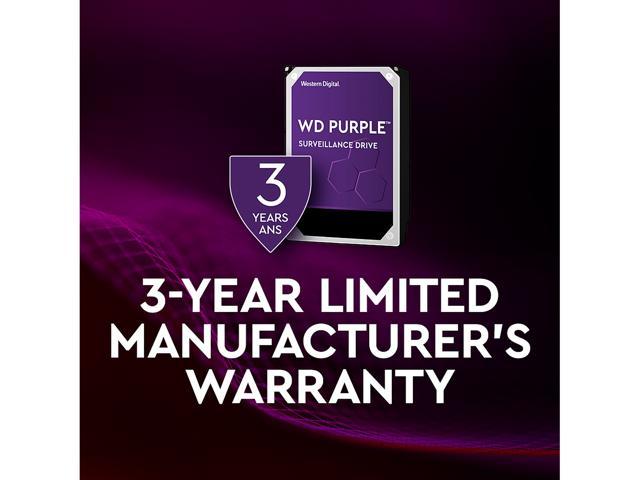 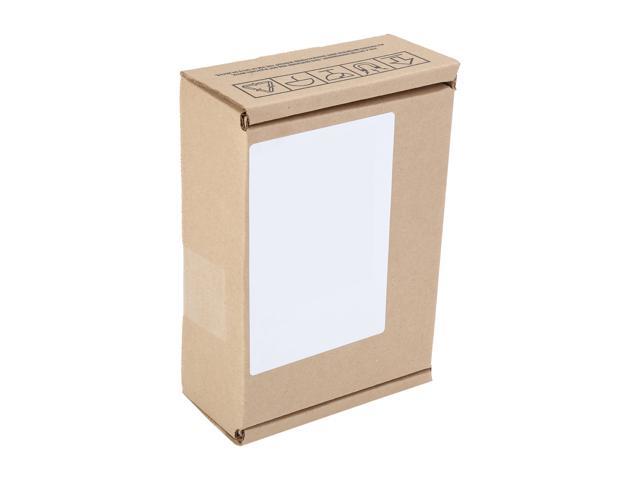 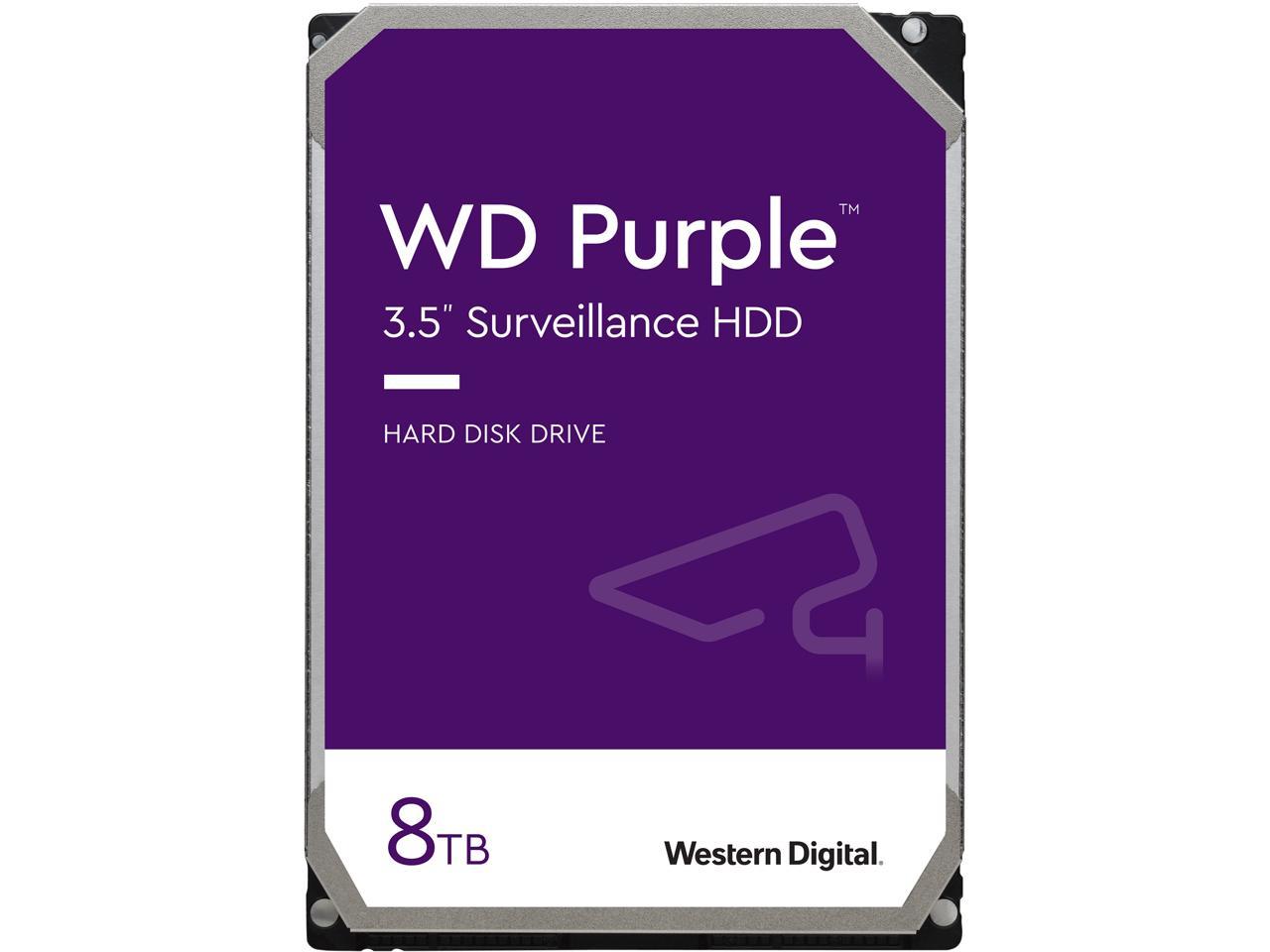 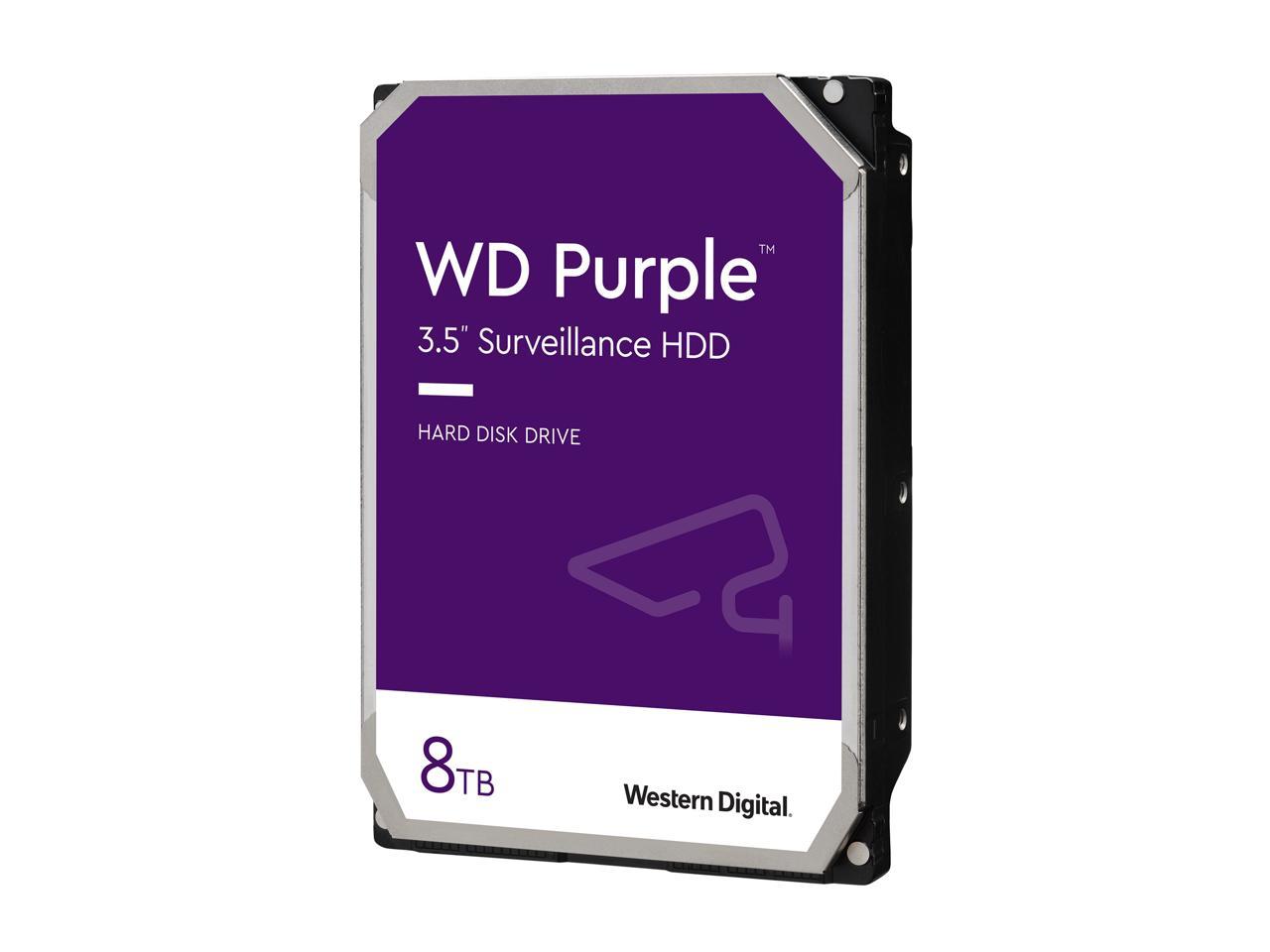 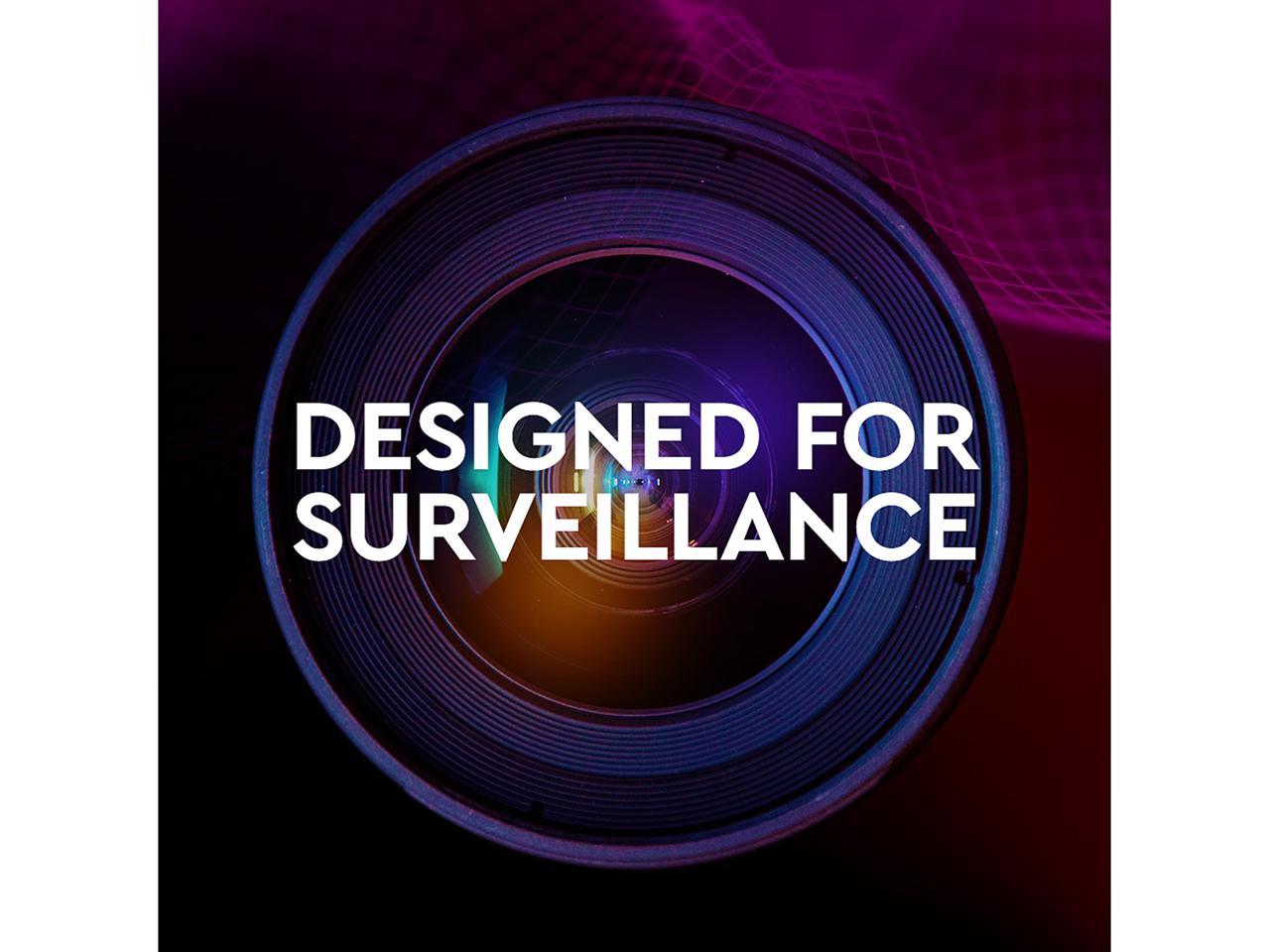 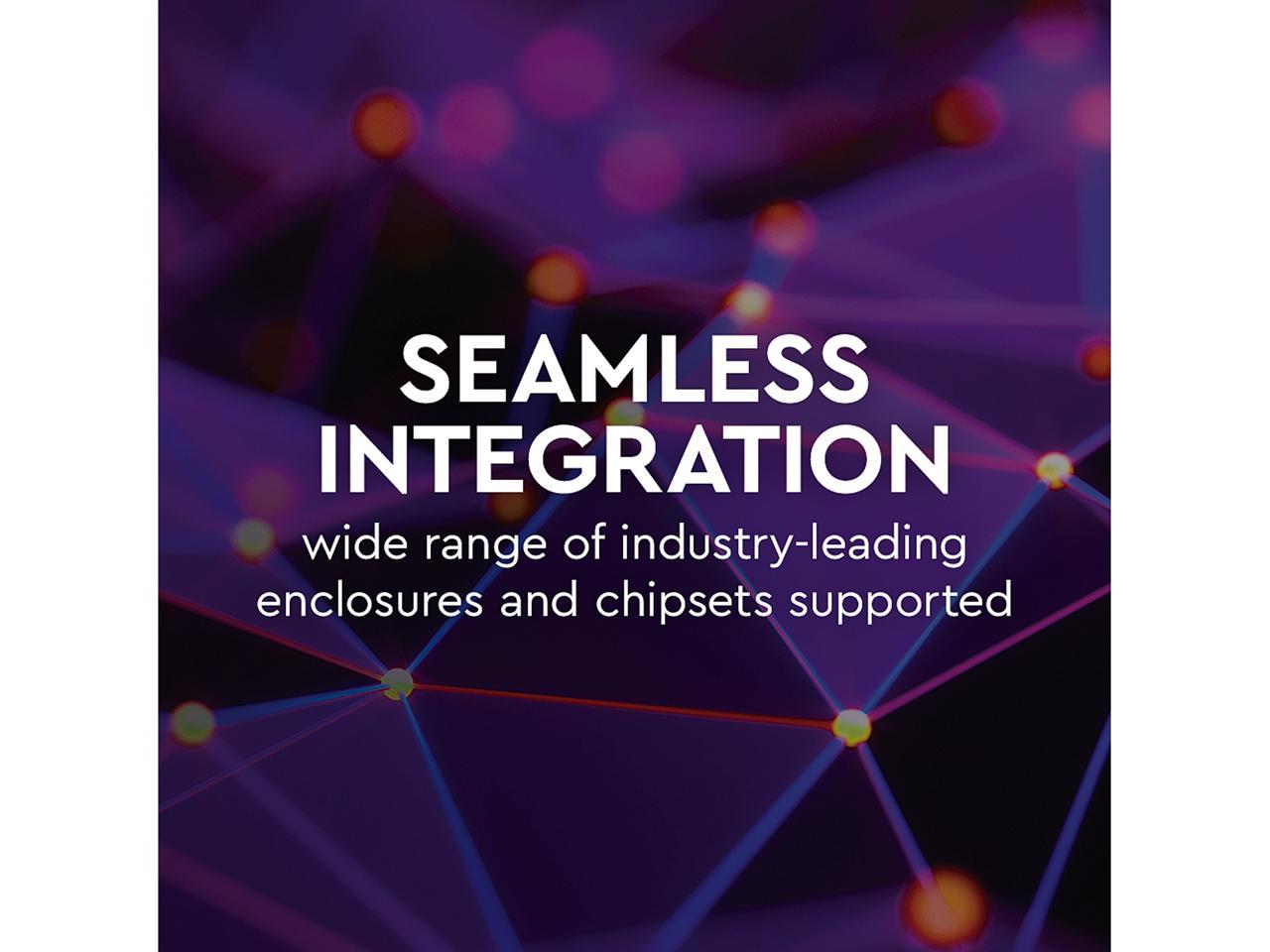 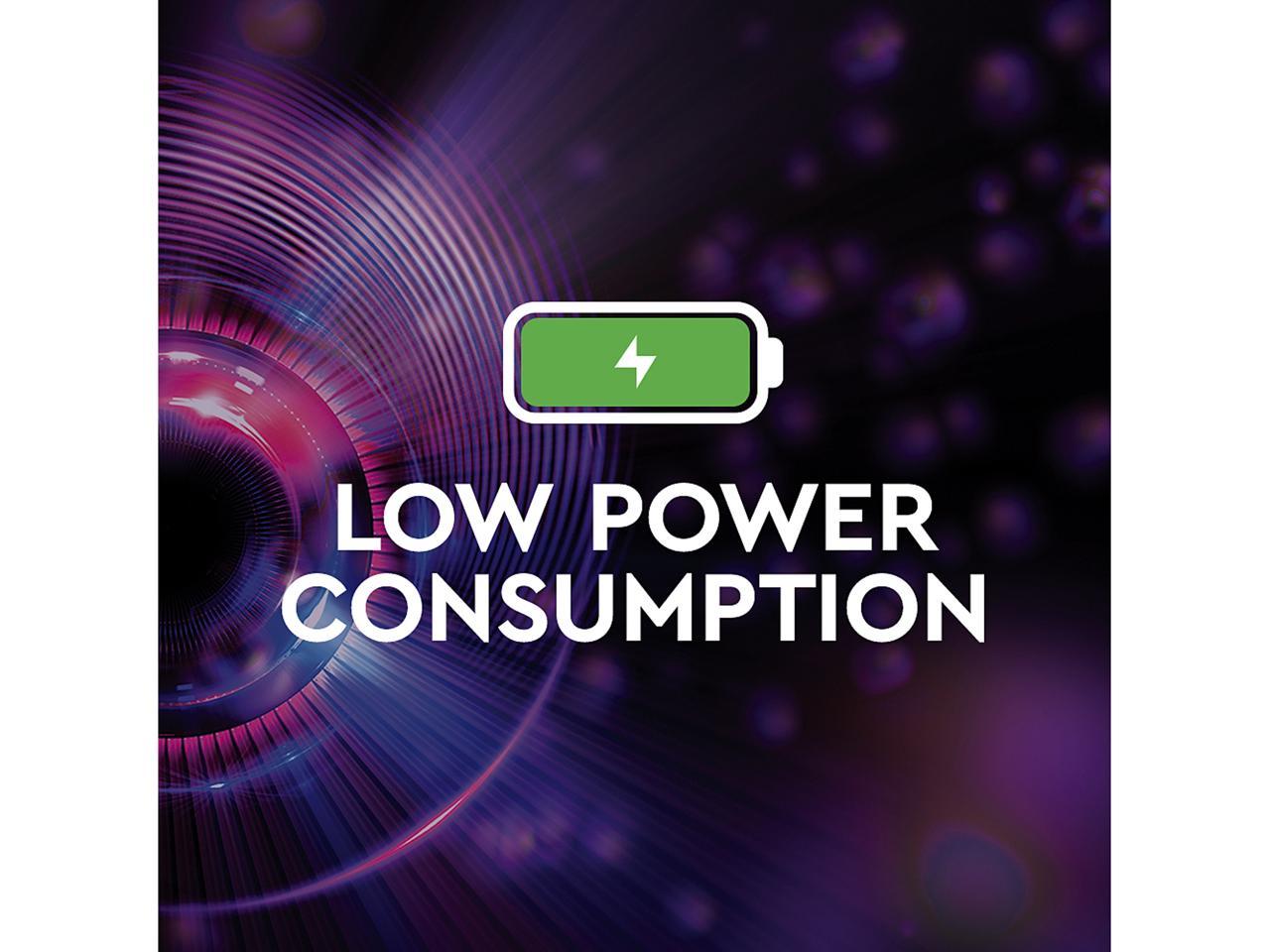 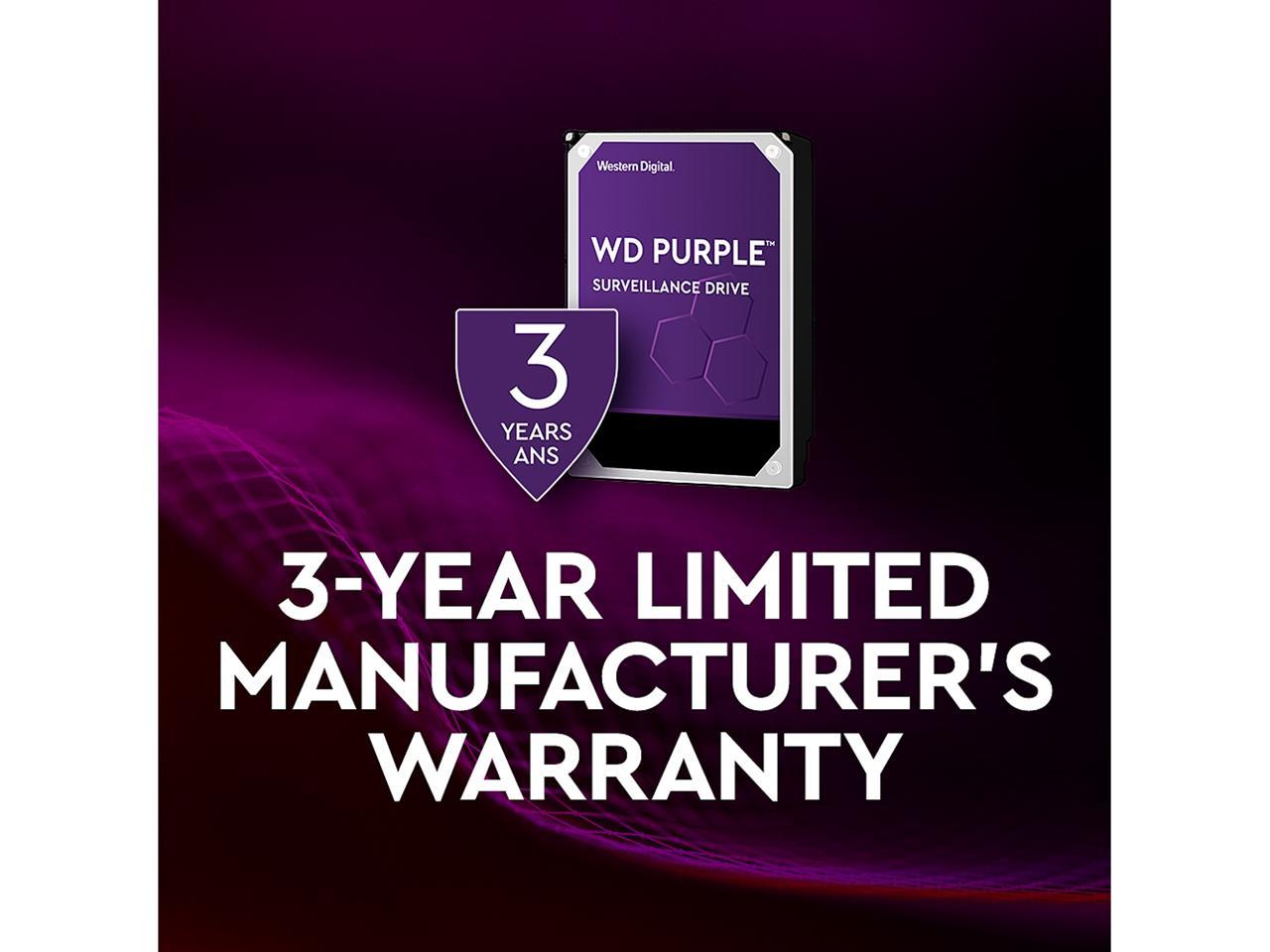 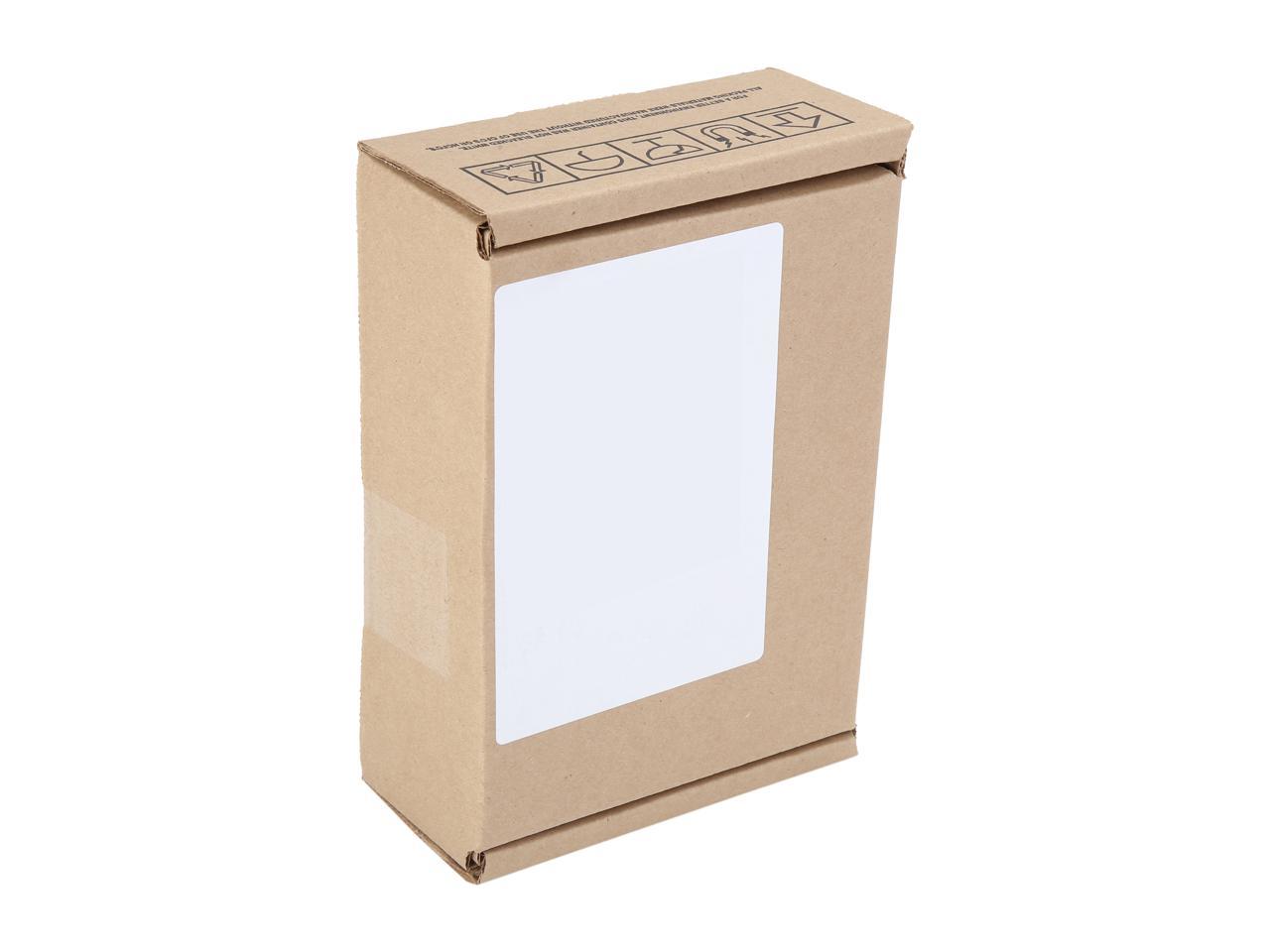 Pros: - Massive capacity, 10 TB which is a lot of video regardless of whichever resolution you are recording - Can sustain long write times which accounts for its durability and endurance as a drive'\ - Was quite surprised of how quick it performed for a 5,400 RPM drive. - 256 MB of cache which is largest ever - Runs pretty quiet, Synologys make a difference - Temps are not an issue runs extremely cool - 3 year warranty which is outstanding and much needed for a drive in this class

Cons: - Expensive, not worth getting unless you really are using this for surveillance whether it is for business or the home setting.

Overall Review: Had the drive running for about 10 months now consistently without any hiccups. I was quite pleased with how well it has stood up to continuous writing. Recording was done using a third party security cam recording at 480p/30fps. Upon review of selections of recordings the drive was flawless. No degraded files etc.

6 out of 6 people found this review helpful. Did you?
Michael J.

Pros: Six terabytes of awesomeness are packed into this purple drive*. It performed well in both DVR and NAS settings, and never missed a read or write. If it’ll be fast enough to suit your purposes, this purple drive is for you. *5.45 TB when formatted NTFS

Cons: This drive, as expected, was too large to be recognized in my antiquated 480p DVR system and my older USB2 hard disk sleds.

Overall Review: When I tested this drive, I couldn’t simply drop it in my DVR system and report back that it worked. For the first week of testing, I plopped it in my NAS system that runs in my garage. I let it run for a week straight while performing data transfers. Now mind you, that isn’t for what this drive is meant, but it served relatively well for its unintended purpose. And it held up to it. While I was testing it as a NAS drive, I moved almost 5TB of data sporadically throughout the week and not a single bit was lost. Now on to its stated purpose, a surveillance drive. The 3.5” disk fit perfectly in my DVR system and was recognized after auto-formatting. I run a modest four 720p camera DVR system and this drive did not miss a single frame of recording. I was able to review footage on demand without lag (even though nothing eventful happened, like always). The drive has more than enough space to store video in my week of using it in my DVR system; I have yet to fill up the drive with security footage. In fact, two weeks wouldn’t have filled it completely. This whopper of a 6TB purple drive is certainly a HUGE step up from the 2TB green drive that was in use before this drive arrived. Of course, reliability has not been an issue in the two weeks I’ve been testing this drive. If a problem occurs in the next year with this drive I will report that here.

3 out of 3 people found this review helpful. Did you?
Derek N.

Pros: While this drive has been designed with a focus on surveillance it would be a perfectly acceptable hard drive in many situations. First, the drive is near silent even on sustained reads/writes. It also runs fairly cool, even under stress for sustained time, peaking out around 95F in a 70F environment with no auxiliary cooling. I'd expect the drive to perform very well in a close proximity hot swap bay installation. It performs decently in synthetic benchmarking I'm getting around 140MB/s read performance and 125MB/s write performance. There are faster drives around but not that run cool and quietly. I've been using the prior AV and now Purple drives in surveillance systems for a long time, they've proven to be very reliable.

Cons: It's not as quiet as an SSD. While the read/write performance is certainly plenty for most it's not great compared to more performance oriented drives (higher rpm).

Overall Review: All combined this would be a good hard drive option for many desktop users as well. It's quiet operation and low operating temperatures make it a great option for small form factors where an SSD isn't an option. I've used a many different hard drives in surveillance systems, I've seen countless early failures... When WD first released their AV drives I started switching them in where more expensive enterprise drives had failed early. This line has continued to prove to be more reliable in these high write conditions. I've occasionally used them in general use computers as primary drives, while there are faster around these are so quiet, well priced, and reliable.

6 out of 7 people found this review helpful. Did you?
Phillip W.

Pros: Does what it is made for. Handles my 3 camera set up easily

Overall Review: Ran this three days on a three camera system at 1080p and it didn't even fill it up after three days. I would feel secure leaving this running and only stopping it if something happens. 2TB is plenty big enough for my needs and playback is wonderful. This will last about a week in my system without overwriting previous recorded writes. That is plenty long enough for me. Now if I needed to let it record longer than a week 2TB would not be enough for 30 days it would take a 6 TB drive. But in my business I am rarely gone longer than 5 days at a time. Low power is just a plus. 9/19/17 edit. So I have used this since the end of august and I have to tell you it is so silent that I cant even tell it is running I went thru some of the video to see the quality compared to last hard drive I was using and even the quality seems better. Will update when I catch someone doing something they shouldn't be.. UPDATE now it is 03/1/2018 and still running strong.

5 out of 6 people found this review helpful. Did you?
Tracy T.

Pros: Handles multiple streams of video with ease. I have 4 cameras streaming to it constantly. When I went back to view recorded video, it played without any hesitation. There was no stuttering or skipping frames. A surveillance drive is designed to record video 24/7. Most of that video is never played back. When you do need to go view recorded video, you want to know it will be there. This drive delivers that feature. The drive remained cool while it was recording. Temperatures were at the low end of the operating range. The drive is also quiet when compared other drives.

Overall Review: I used this in a BlueIris system and it performed well. I would not hesitate to recommend that someone consider this drive for their surveillance drive needs. Please be aware that this drive is a surveillance drive. It is designed to constantly record video with no frame loss. They are more tolerant of errors. When a drive performs error correction it stops writing to correct the error. If a surveillance drive stopped recording, it may miss the important details you need. WD Purple drives do not perform error correction because they focus on recording. WD calls this AllFrame 4k technology. This drive can be used in a RAID array but you would only want to use it to record video from cameras. Do not use this drive as your main system drive or to store pictures, music, games, etc. Drives designed for multiple types of data will be much faster and will actually perform error correction to protect your data. Do your homework and you will be much happier with your purchase.

4 out of 6 people found this review helpful. Did you?
Chris M.

Pros: + Robust Drive + Large 8TB is a step down from the 10TB + 3 year warranty + Designed for CONSTANT writing + Does not suffer from the Idle3 Timer Issue + Weekly disk checks consistently come up clean + Fast for a 5400 RPM drive (128MB large cache!) + Completely silent (Synologys are quiet, so loud disks are annoying)

Cons: - Large disks are still expensive. Having multiple for a RAID is $$$$ - Only 3yr compared to 5yr warranty of Enterprise disks

Overall Review: I've had this running 24/7 for about 3 months now in a Synology NAS using it as a NVR with the included CameraStation software. It's performed flawlessly recording a 1080p/60fps stream and a 480p/30fps. Playback of video works perfect also. It's a great price/storage ratio and specifically for NVR/DVR video.

2 out of 3 people found this review helpful. Did you?
Rauel C.

Pros: I'm using this drive on a machine with steam and have my games loaded on it. It's running nice and cool and games load pretty quickly for the specs being 5400rpm, but I assume the large 64mb of cache is helping with that. The fact that this drive is meant for security, which tend to run 24/7, means that this should prove to be more reliable than most drives. I'm very happy with the current price of it and is great for the storage and performance provided.

Cons: The pictured drive's sticker looks cool, I wish the drive actually looked like that. In actuality it has the generic WD sticker with the info on it. Doesn't take away from the quality of the drive, but if I had to give a con, that would be it.

2 out of 3 people found this review helpful. Did you?
Kevin W.

Pros: Able to handle up to 64 cameras. unfortunately I'm unable to tax it that high as my setup only has 6 cameras. My setup is also motion detected so I had to set up something to keep moving 24/7 so I could really test this drive to its potential. It passed with superbly flying performance. I mean like the Blue Angels and Thunderbirds performing at the same time. I'm sure adding more cameras to it would not slow it down in the least or drop off its performance factors. This drive is designed for 24/7 use and streaming so I left my motion setup on for 3 full days to verify it did indeed pass with flying colors. Coming with a very nice 3 year warranty means if it does fail (which I doubt) I'm covered by the peace of mind that I wont be paying for a new drive for at least 3 years. Western Digitals customer service is superior to any I have ever dealt with.

Cons: absolutely none. well one nitpik if I may lol and another reviewer spoke on it. Speed 5400rpm not 7200rpm like my other platter drives in my comp. But in reality you dont need 7200rpm for this type of drive, I'd imagine it would cause extra heat and less longevity.

Overall Review: Need a larger hdd that is made for 24/7 use for your dvr/pvr setup this baby is what your looking for and Western Digital has you covered from 500GB all the way to 10TB ( as of time of this review) so that should handle most setups with ease. Western digital has been at the storage game a long time now and as long as they keep doing what they are doing I do not ever see any issues as I stated before their customer service is unprecedented. So buy with confidence that you will have the best of the best.