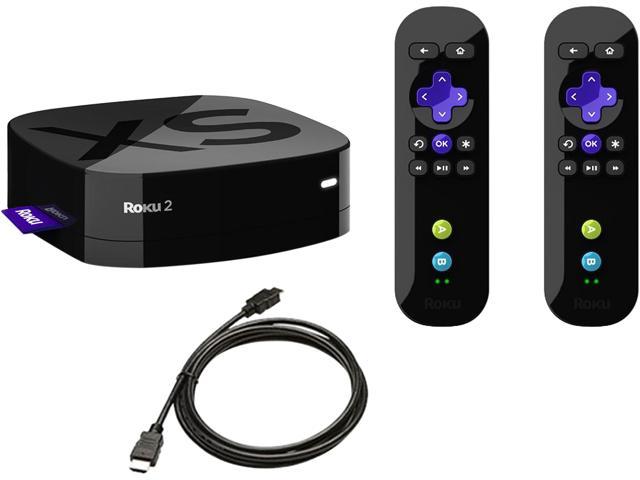 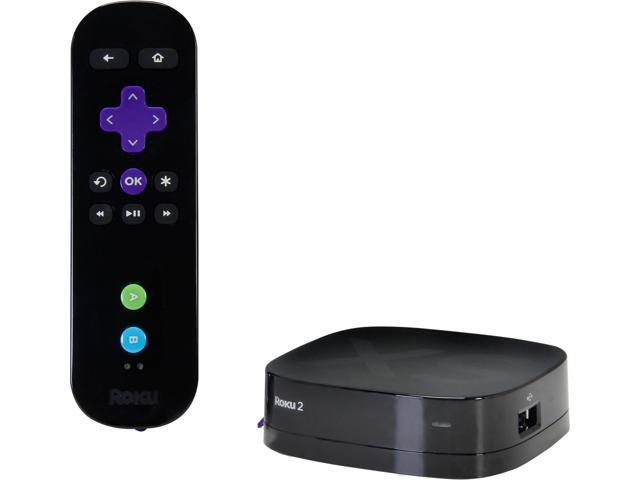 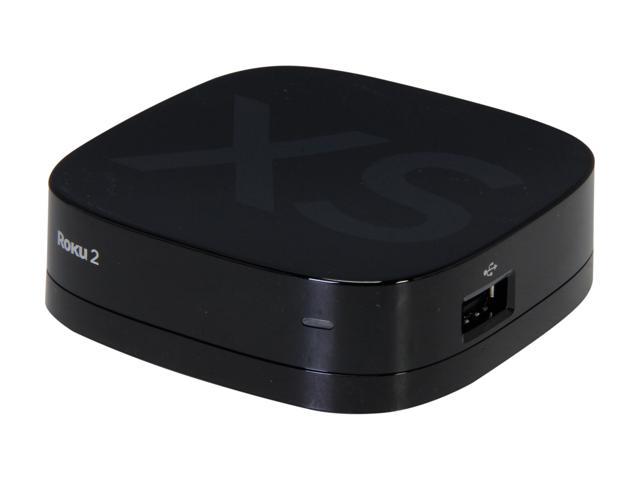 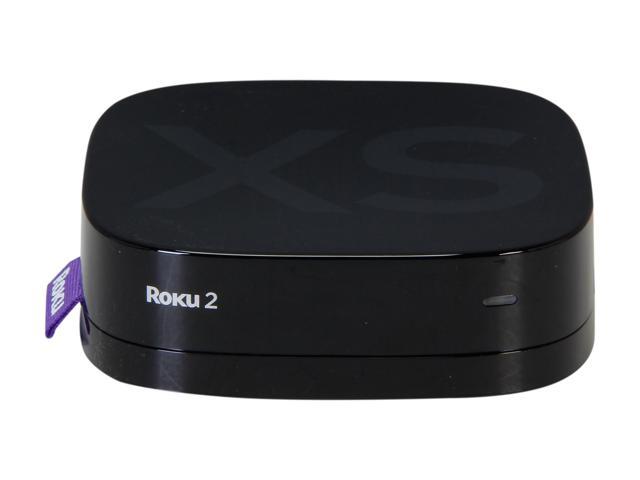 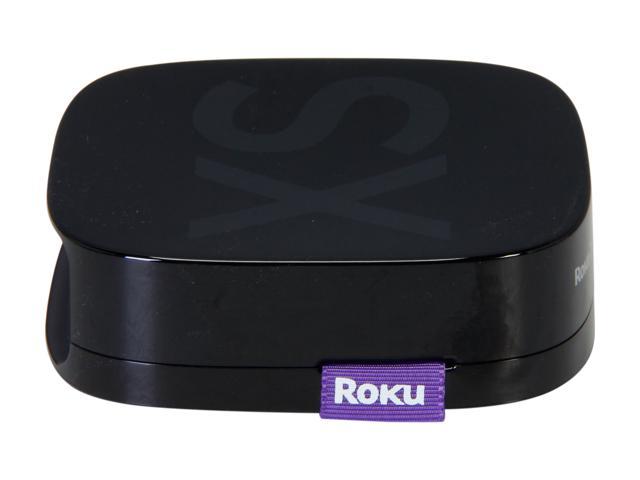 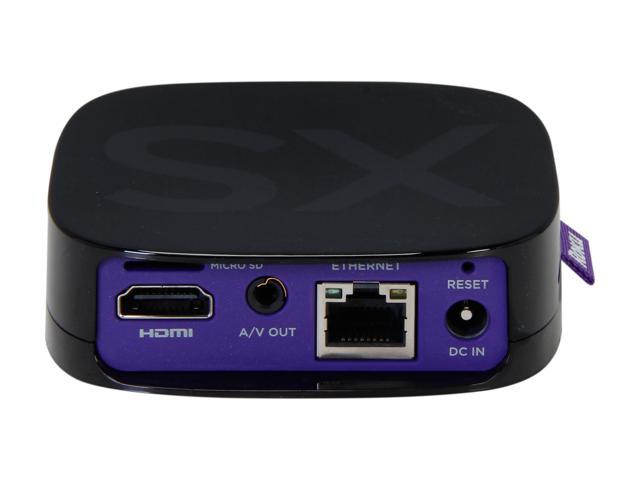 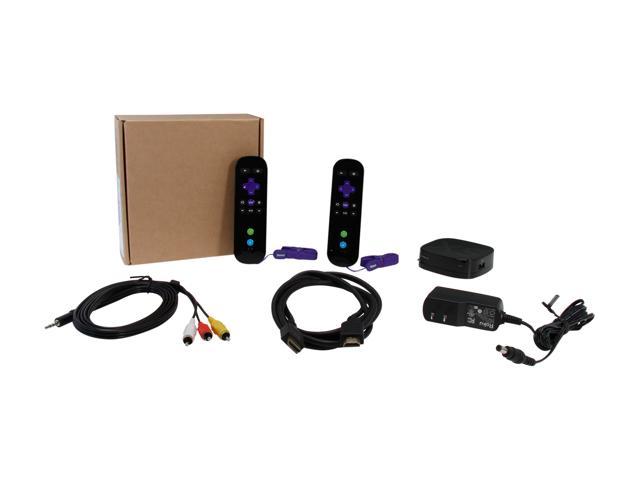 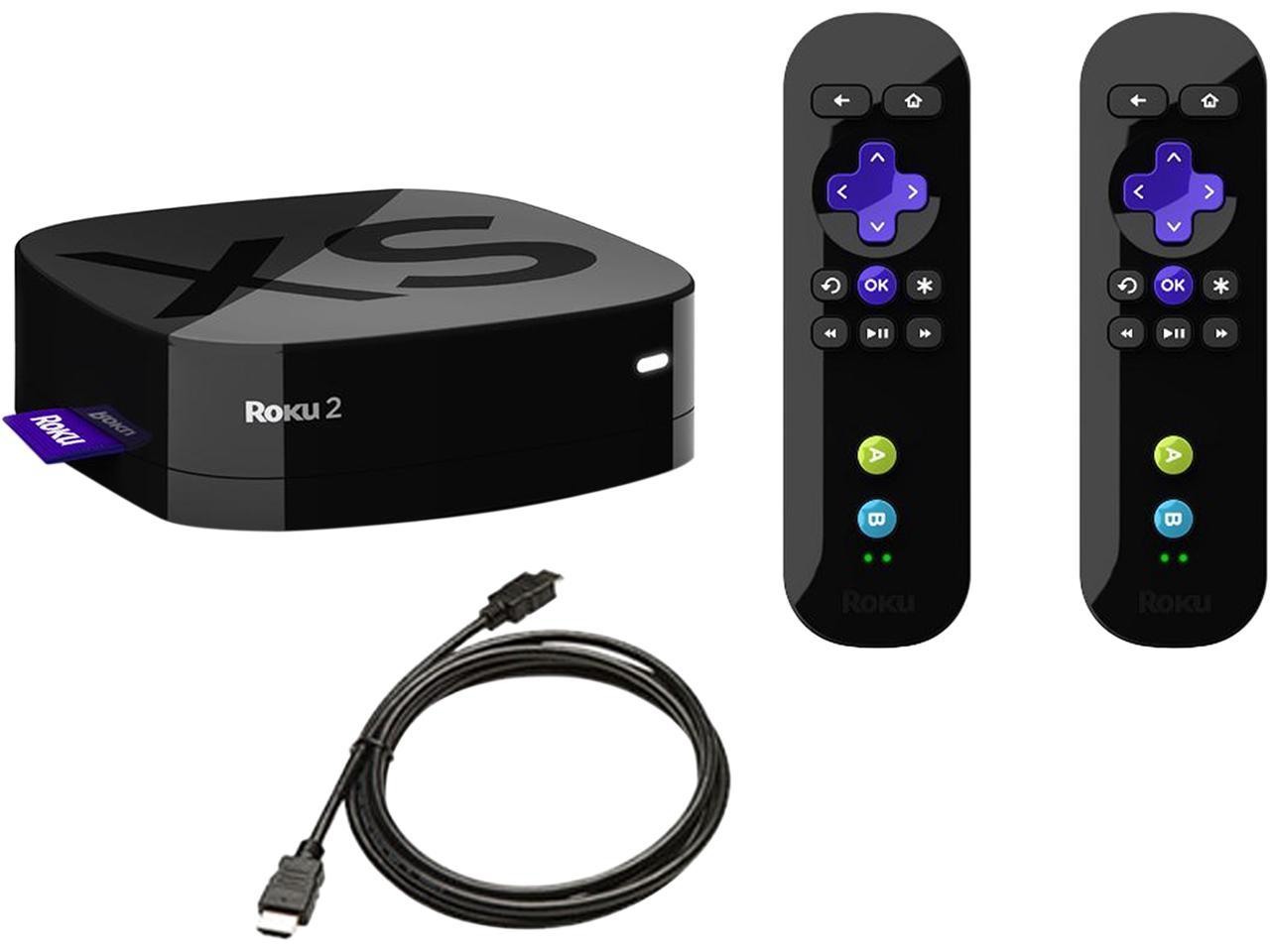 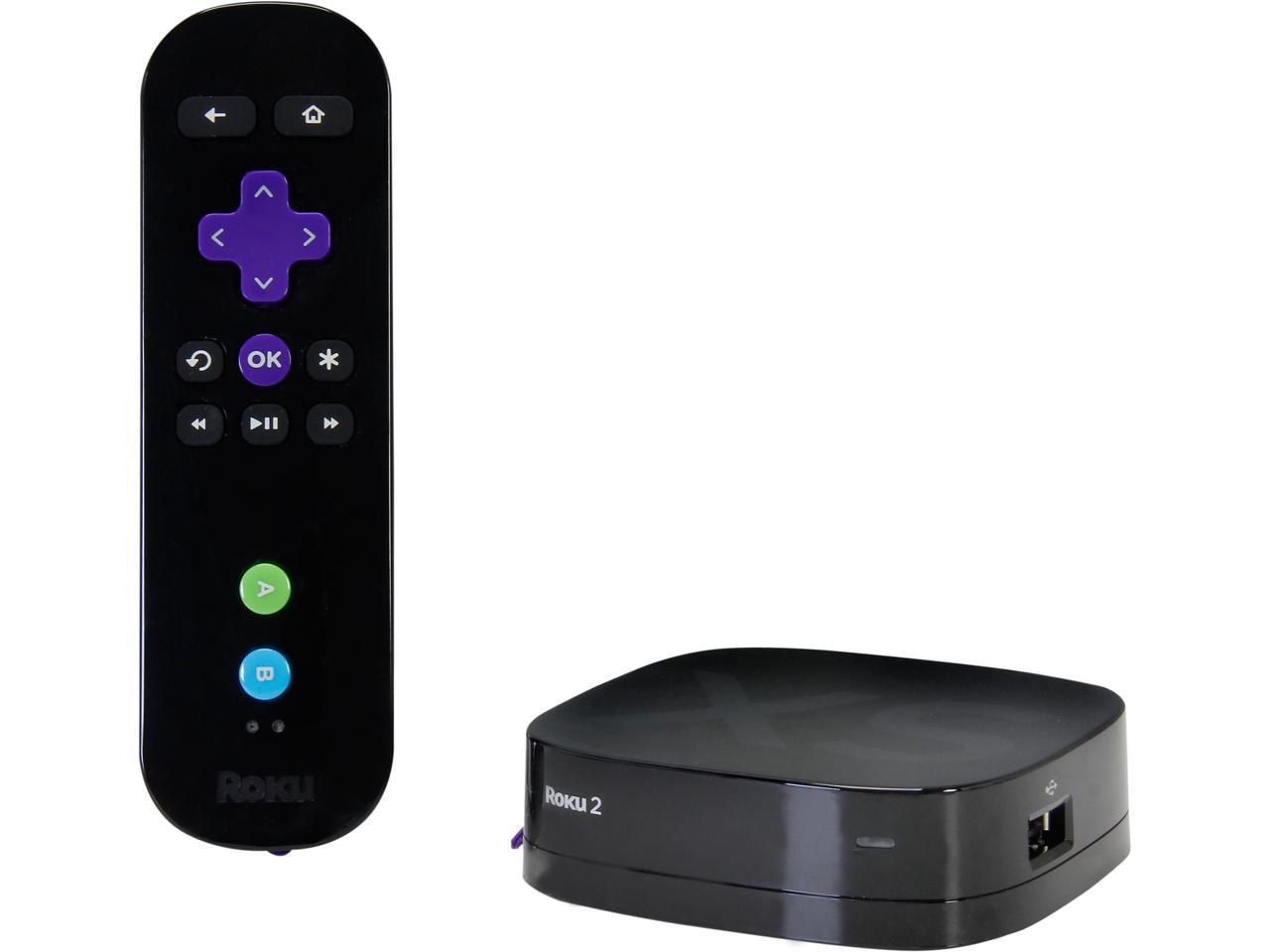 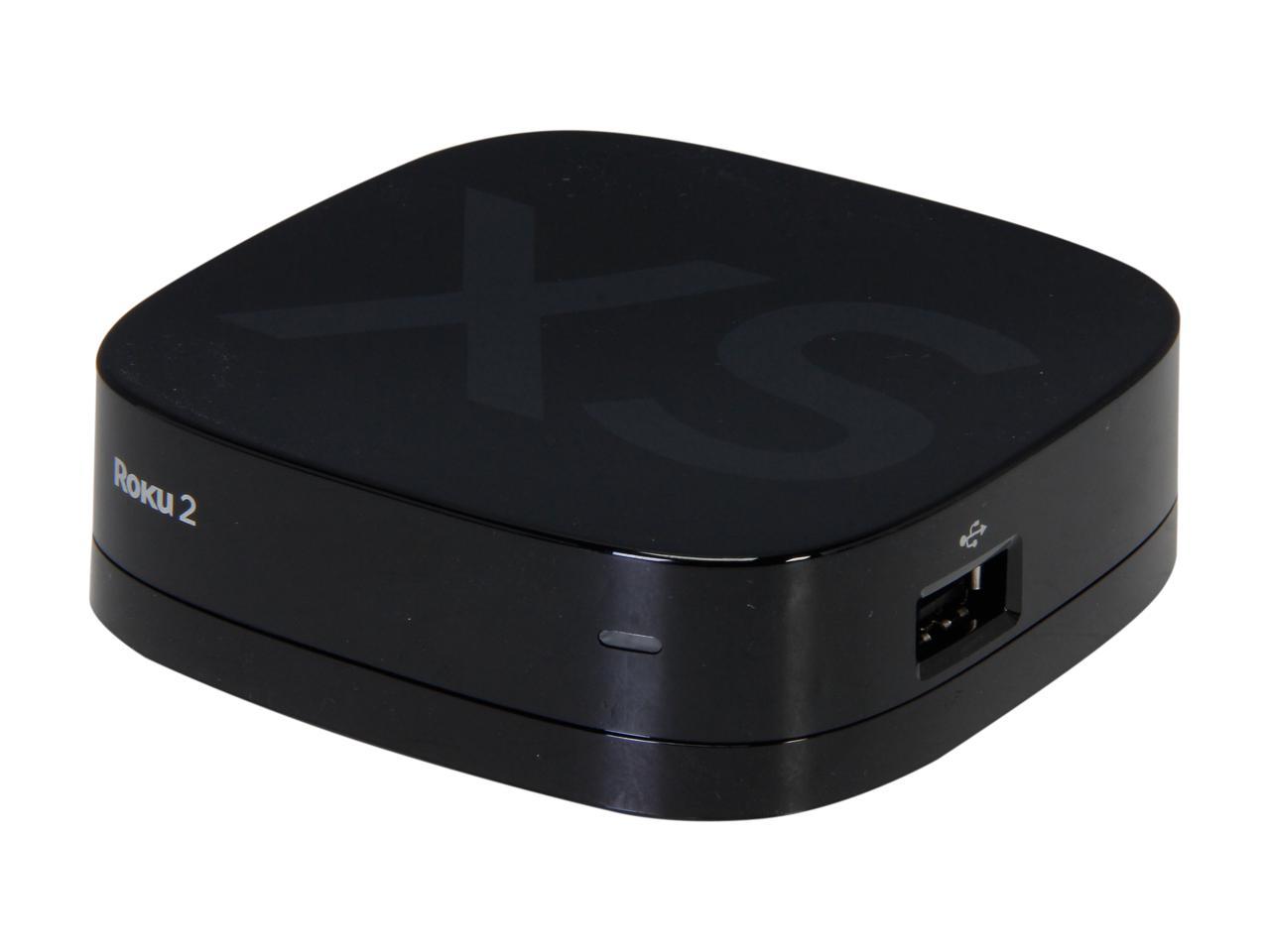 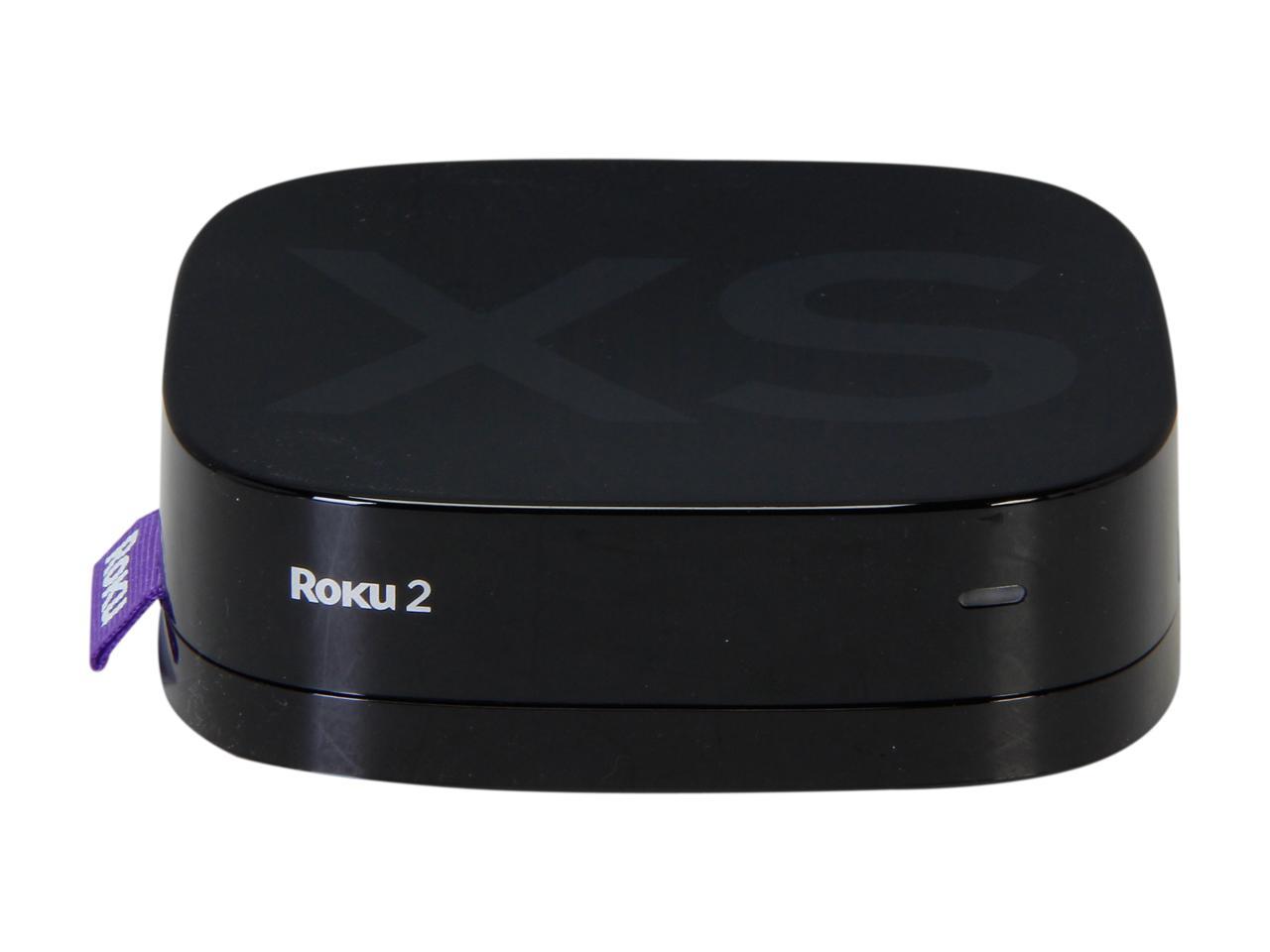 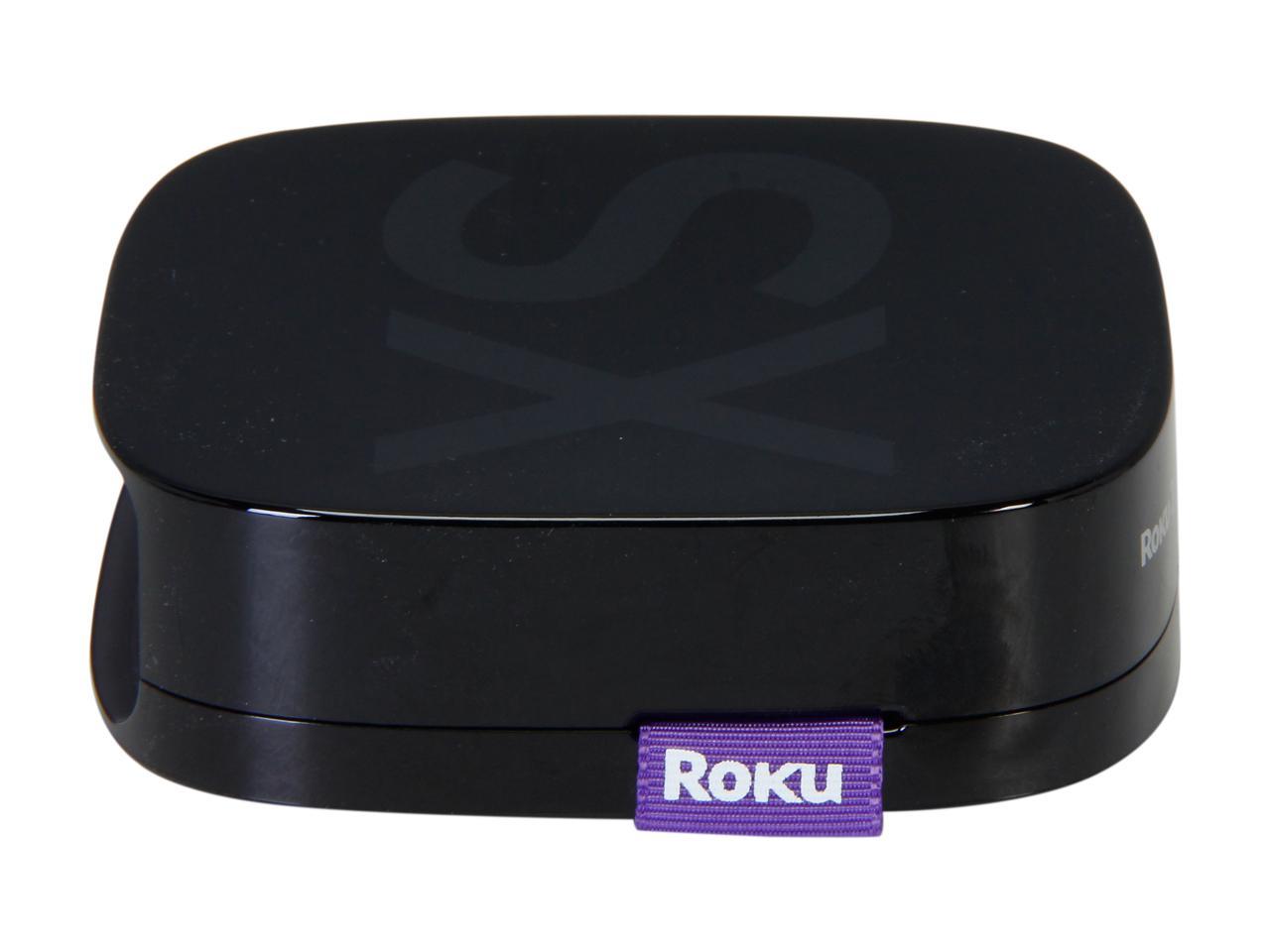 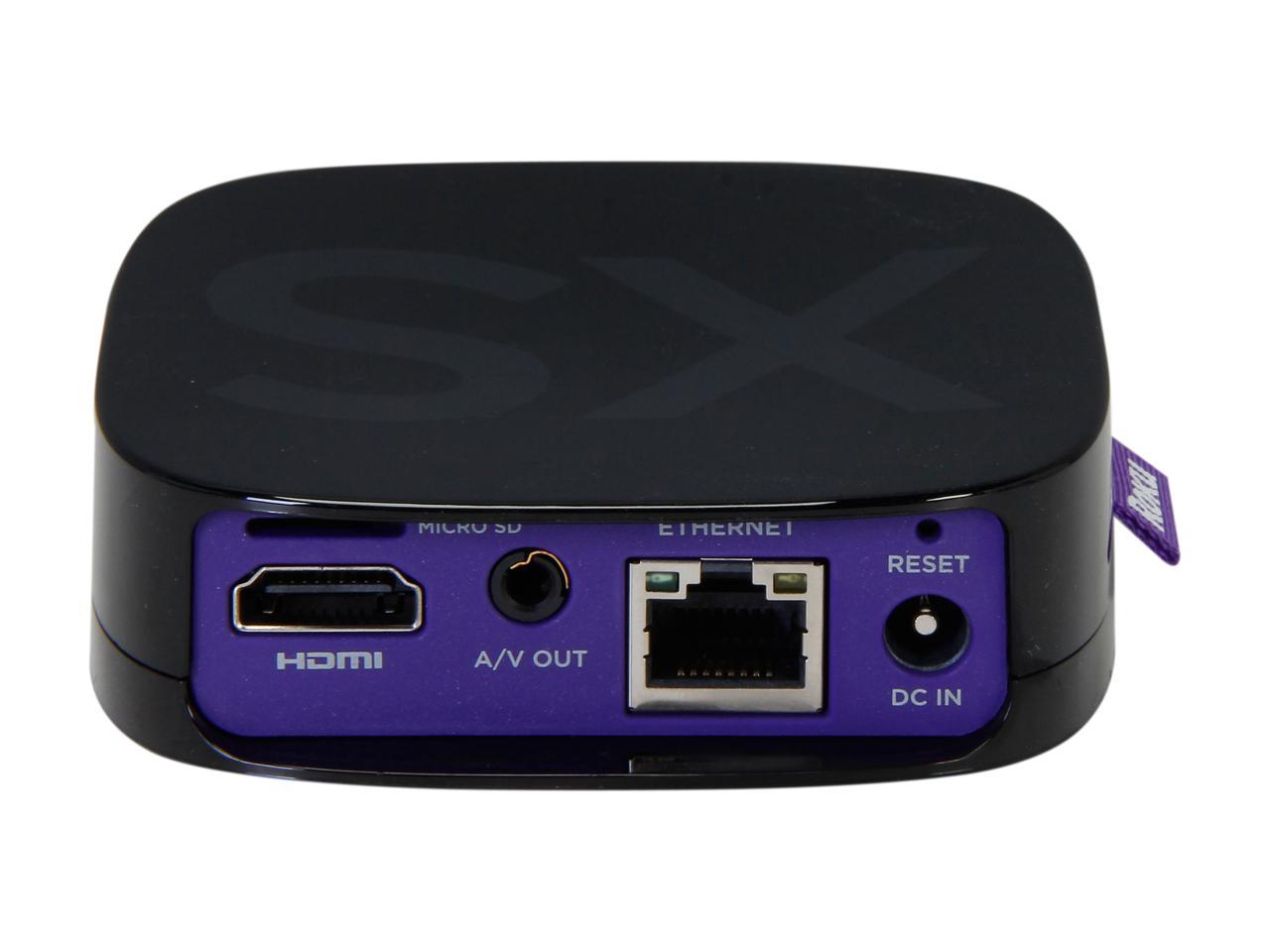 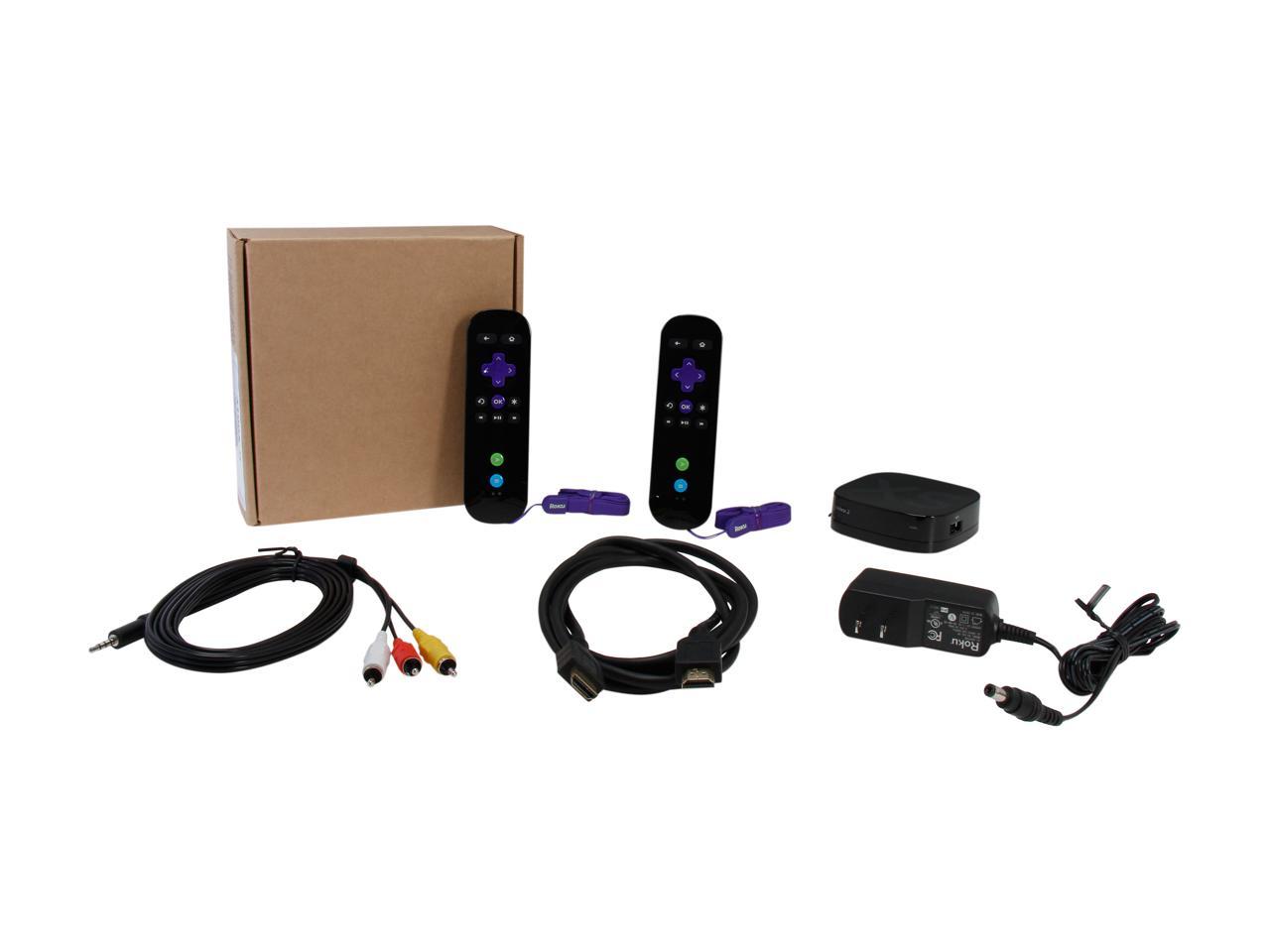 This means the product was tested and repaired as required to meet the standards of the refurbisher, which may or may not be the original manufacturer. Any exceptions to the condition of the item outside the manufacturer’s information should be provided in the listing, up to and including warranty details.
(45) Write a Review
OUT OF STOCK.
Overview
Specs
Reviews

The Roku 2 XS streaming player redefines your home entertainment with endless video and games in a sleek, smaller-than-a-palm package. It streams over 600 entertainment choices wired or wirelessly in up to 1080p HD quality, without the need for a PC. A one-stop search across top channels, like Netflix, Hulu Plus, and Amazon Instant Video, makes it easy and simple to get your desired videos. You can play motion-based games with the Bluetooth remote, with Angry Birds included free. The Roku 2 XS comes with a USB port for direct media playback, and a microSD card slot for easy storage expansion. The sleek, ultra-compact footprint can easily stand on the desk or be tucked behind the TV, without adding any bulk.

Pros: Works and looks like new! Did not think it was refurbished at all! Perfect for non-smart tv's!

Cons: None that I have noticed....

Overall Review: I'm in love with this thing. I had a small HTPC I always used for watching media. This thing does everything my HTPC does for a fraction of the price and it's TINY. Along with that it has a Time Warner Cable App. We returned the Digital Cable Box in our bedroom ($12 a month) and now use this exclusively to watch Cable. Now ordering one for every TV in the house. I'm also a big fan of Plex. I have a media server in my house with TBs of media. I run plex on this server and stream to my PCs. Roku works with Plex so I have full access to my media collections right on this thing.

Overall Review: Realize that only one of the remotes are paired when you receive the equipment. Simply put batteries in the second remote and pair it to the unit per on screen instructions under Remote Pairing. Replace the batteries that come with the player. The originals died on me in 3 days, but to be expected from a "refurbished" purchase. Overall a tremendous value that delivers excellent streaming quality and variety.

Pros: Speed, size, ease of use, Roku keeps upgrading it and adding content. Also, you can cut the cord to cable. I have four of these exact units. All refurbs and all are perfect.

Cons: Granted this unit was supposed to be refurbished, so a little leniency should be allowed, but mine was DEAD. It even had a sticker with someone's initials on the bottom, which I would assume was the technician who verified it was functional. But he failed at his job. No power LED. No video output. Not much more to troubleshoot other than making sure the A/C outlet is live, which I did. I even waited in Roku's online chat, and verified it was dead with the representative.

Overall Review: Because I pulled my PC out of the entertainment center, I did not want to go through the hassle of hooking it back up...so I had the wife pickup a Roku 3 at Wally World (she was out Xmas shopping anyway). Roku 3 works great. Streams from my Plex server just fine.

Pros: all but a few of the Roku 3 features at half the price. and its got more features than the new Roku 2 (2720) it works with older tv's where as the Roku 3 is HDMI olny. b

Cons: compared to Roku 3 No dual band Slower processor (not really noticeable though) No headset jack on remote.

Overall Review: These are a great value and with an hdmi cord and second remote its a way better deal than the new roku 2 or 3. Also a review above siad the roku three does not have lan or micro sd. I think they were refereing to the new Roku 2 (2720) because I own a 3 and it has all that stuff and a faster processor. where as the 2 is the same processor as the XS with dualband and no SD or USB or Lan Port.

Pros: Compact, Energy efficient, feature rich, and streams video/music with extreme efficiency. The unit came with two remotes, which is very handy for gaming with friends. The package also included a new HDMI cable. The extra remote and HDMI cable were very nice add-ons making the package price very attractive. The system was extremely easy to setup, and the Internet interface segment of the installation was practically seamless. I had my Roku up and running practically in the length of time it took to unpack the unit. Formatting the micro-SD card took some time, but it was 64GB card. Lots of channels to choose from and many are free. The channel selection is diverse. Some of the free movie channels, however, have the requisite ads that play throughout the run time, which totally disrupts the flow. It's akin to watch TV, but what do you expect for free!?

Cons: The system did not integrate with my Plex server as seamlessly as I would have hoped. The setup is somewhat convoluted and "glitchy". No LAN storage capability, per se. A USB device port is provided, but the ROKU does not transcode on the fly. Movies and music will have to be transcoded first, into the supported formats, before you can use an external storage device to play your movies and audio. NO .mpeg capability.

Overall Review: The Roku 2 XS refurb is actually a better value and more feature rich than the third generation Roku 3. While the Roku 3 has a faster processor and a nifty audio jack on the remote, which I personally find to be a nice feature, the Roku 3 is has less capability than the Roku 2 XS. The third generation Roku series has piecemealed it's feature set. The Roku 3 is price around $99.99 and not longer has wired Ethernet, micro-SD, or analog audio/video capability. It's digital or nothing. Additionally, the second generation remotes DO NOT work with any of the third generation Roku line. Roku changed the radio setup so it is now dual direct. So if you have old remotes keep that in mind. The Roku 2 XS has wired Ethernet and wireless capability, sports analog audio/video, HDMI, a micro-SD port, and is currently $35 less than the new Roku 3. BTW, the Roku 3 does not have an improved Plex interface if that's the way you roll... Just Say'in!

Pros: Roku 2XS is by far the best miniature media streaming device I've owned, It is so great, I've gotten friends and family their own, and everyone is happy with it. Good Xmas Gift, Birthday, ETC. the Price itself is amazing for the power it contains. This paired with My Plex app makes it easy to watch any content. Chromecast is a joke compared to the roku.

Cons: As much as I love this, Ads in anything you pay for is always a negative.