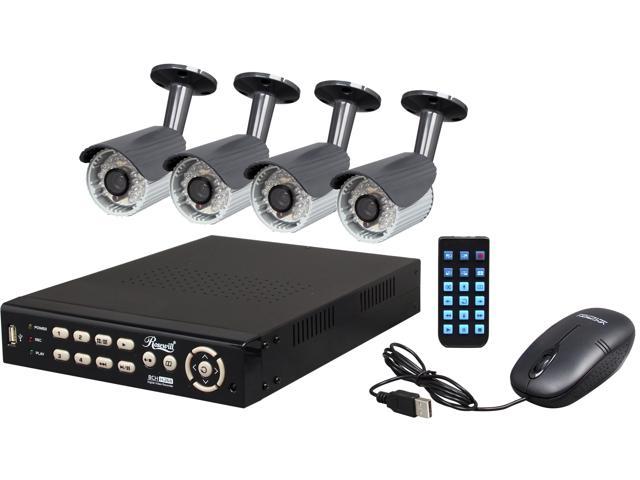 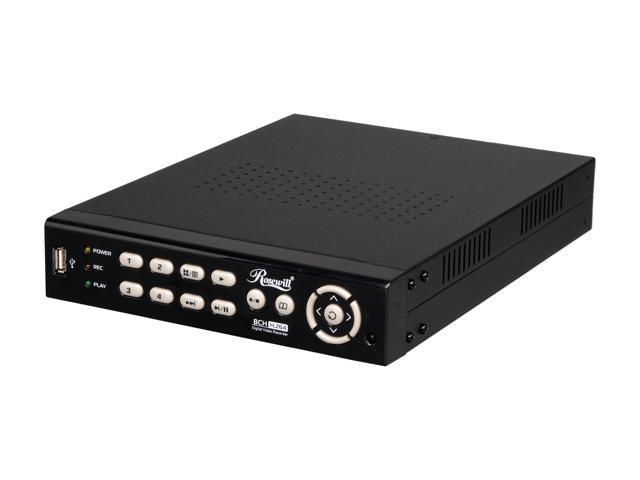 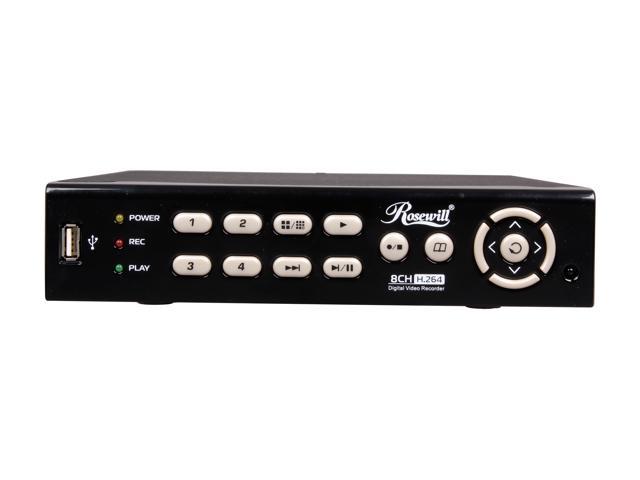 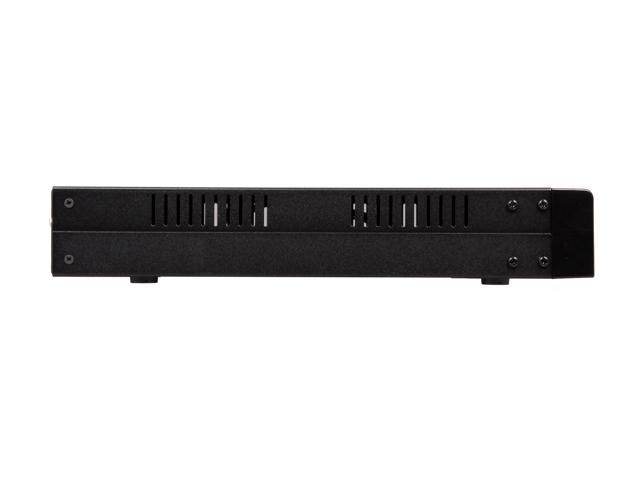 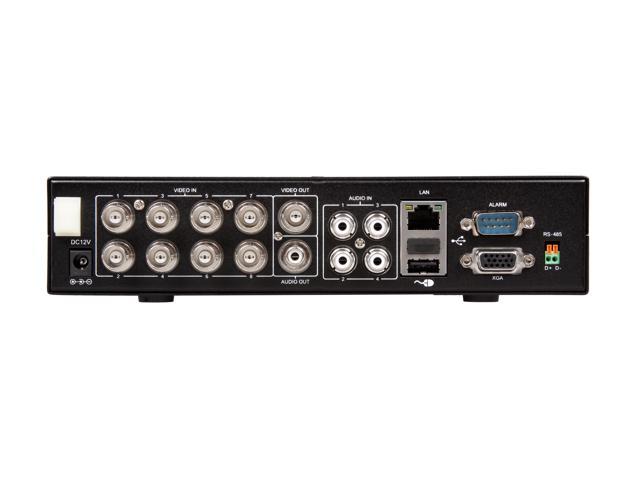 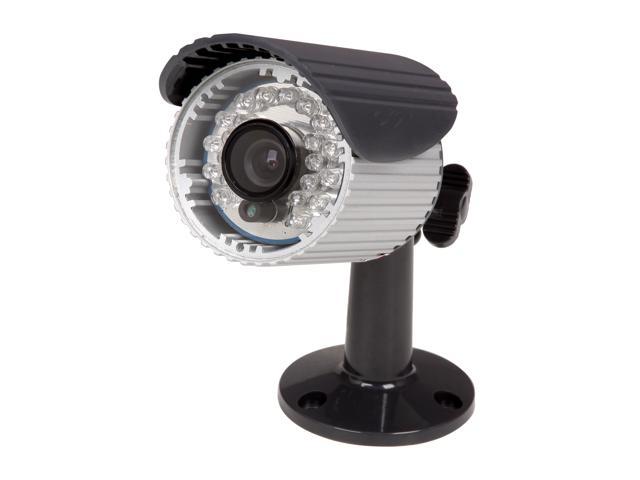 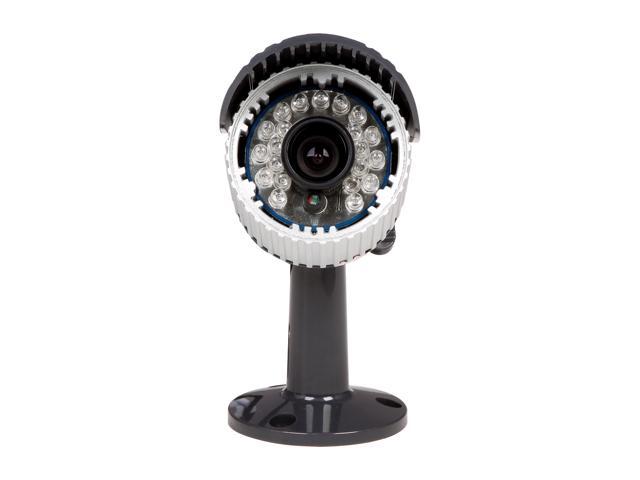 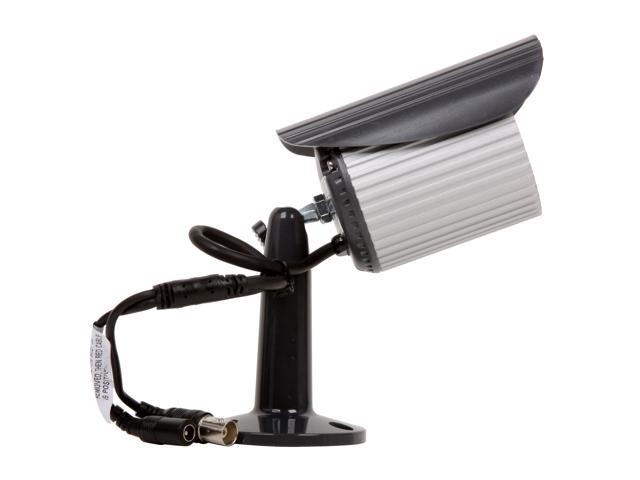 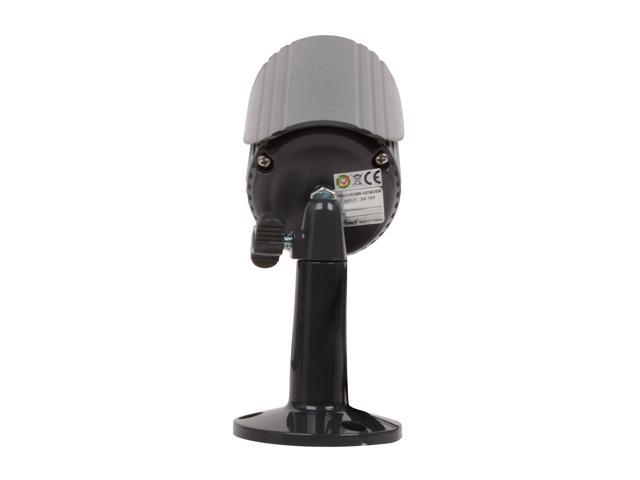 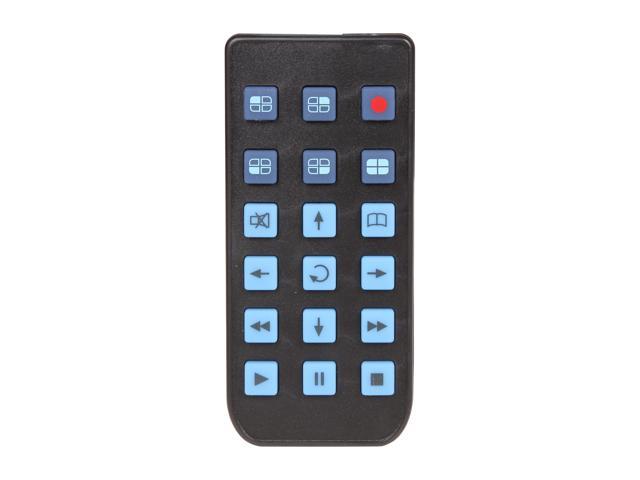 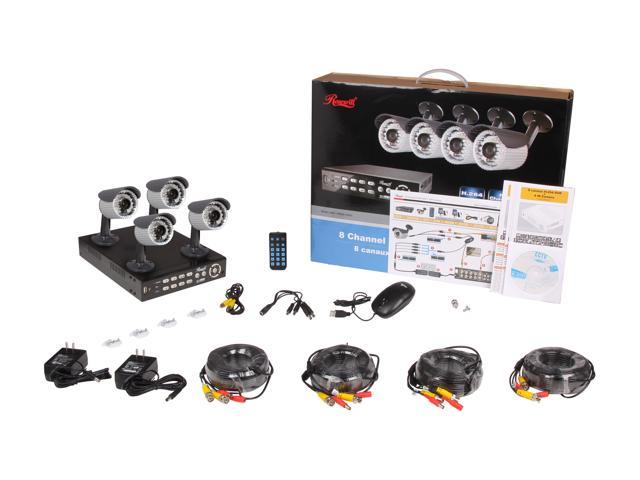 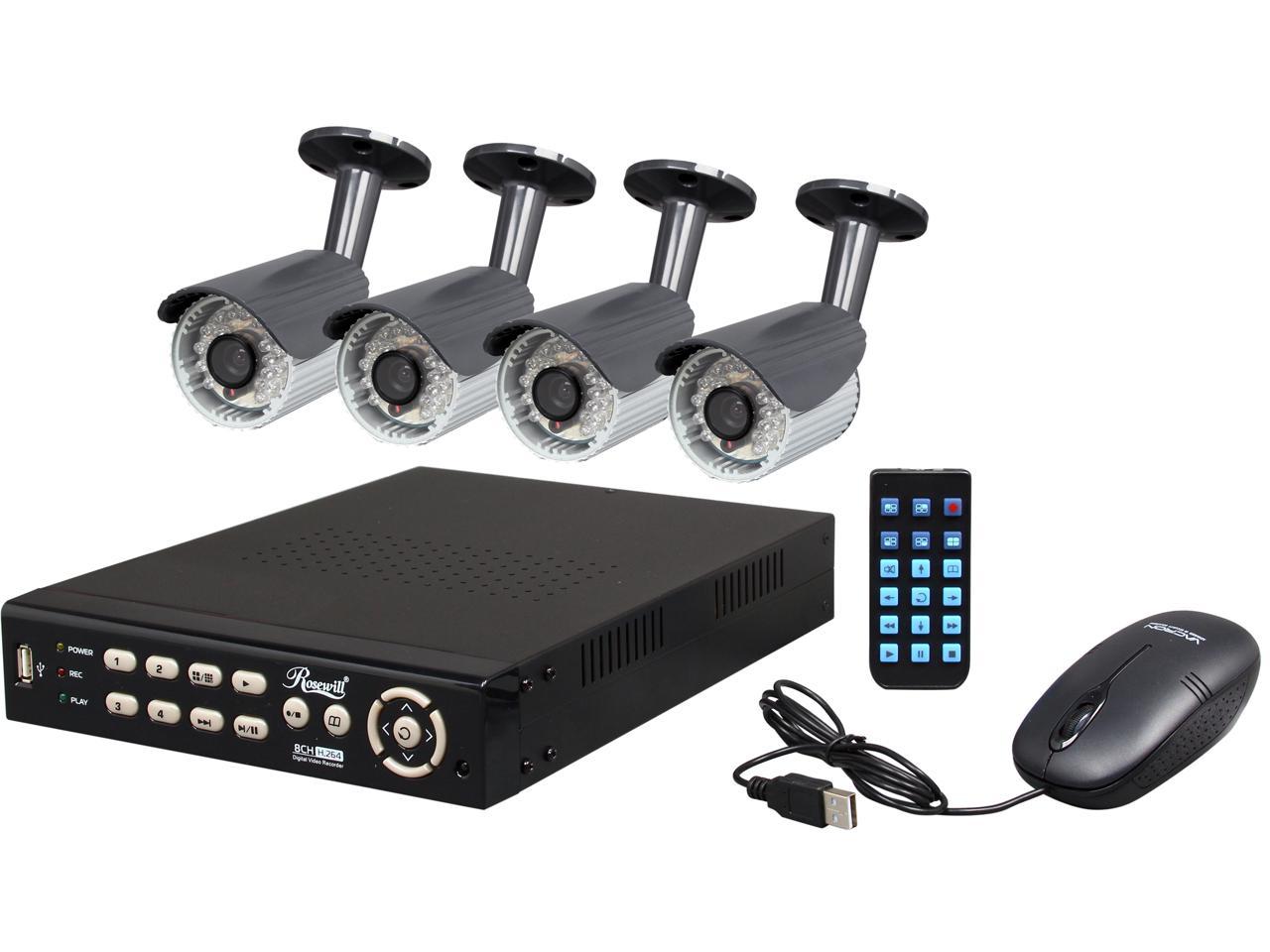 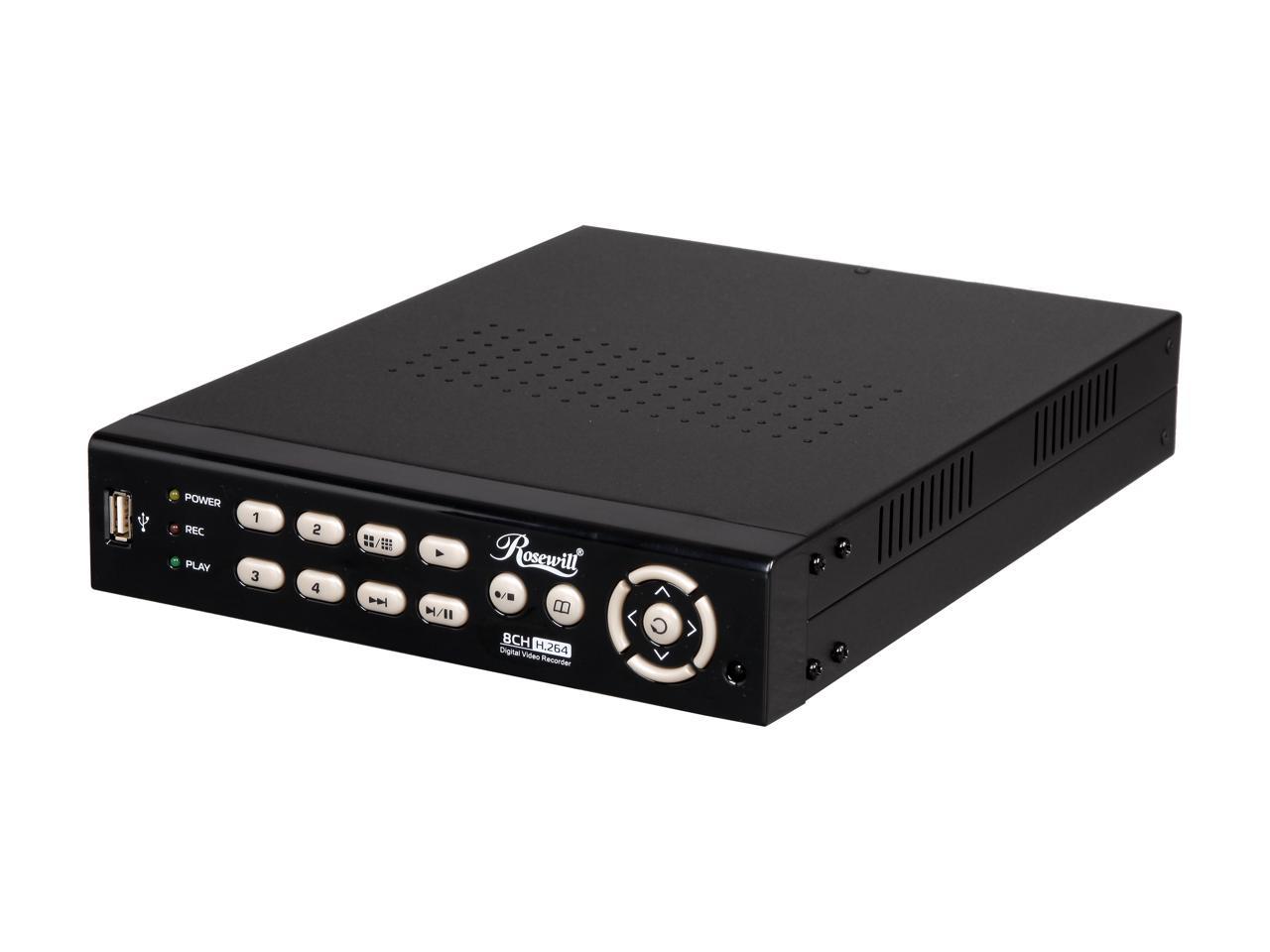 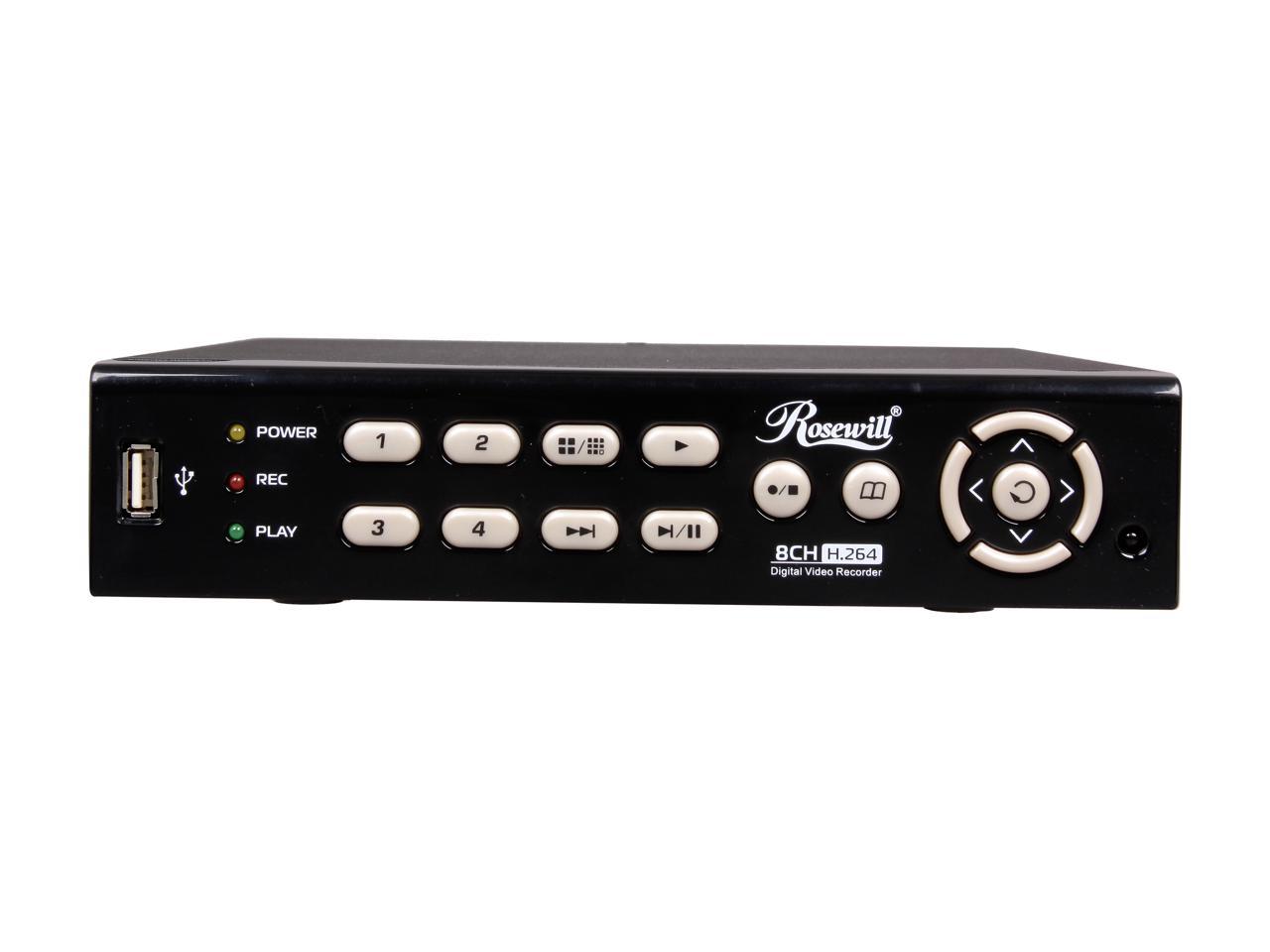 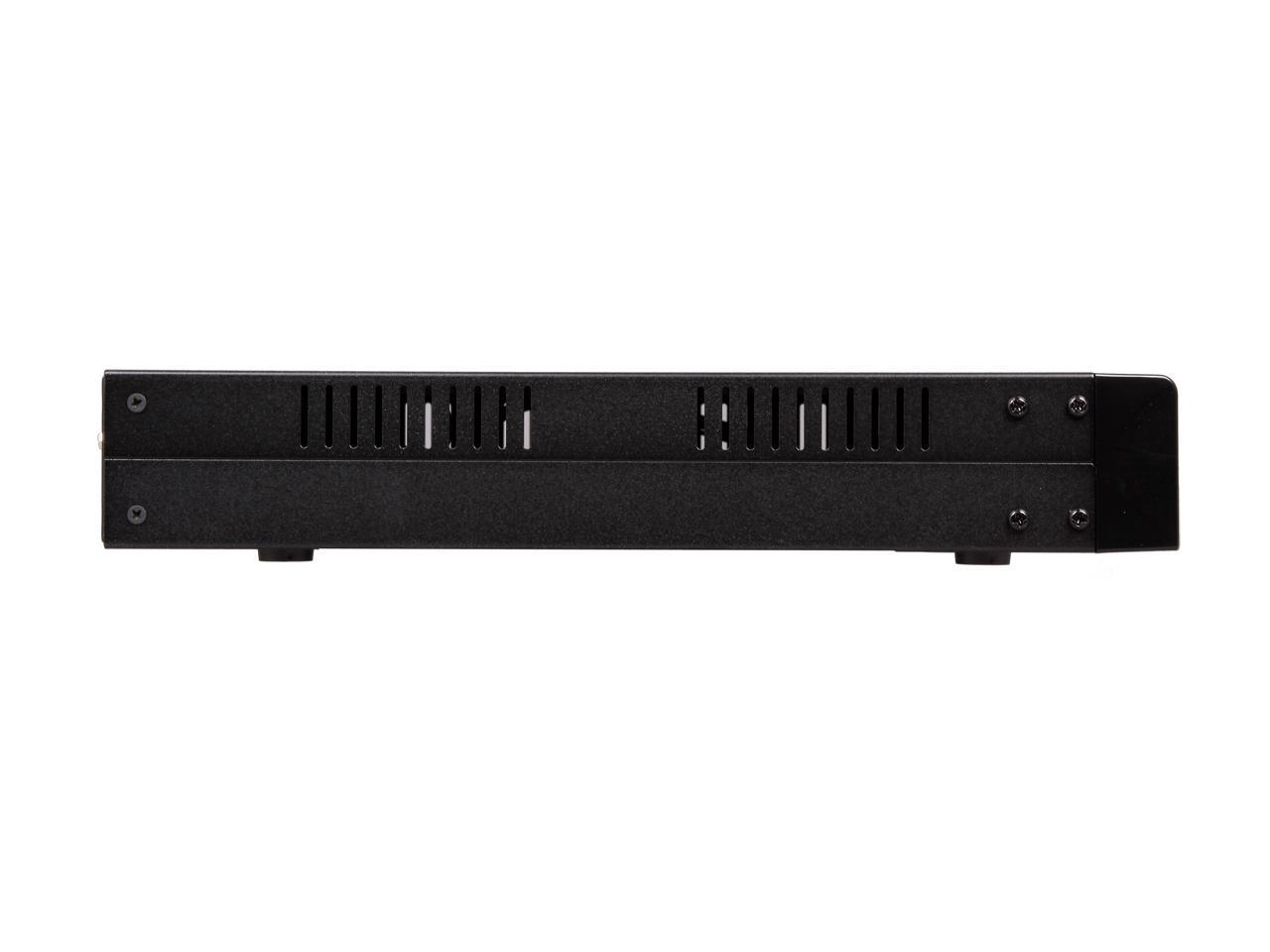 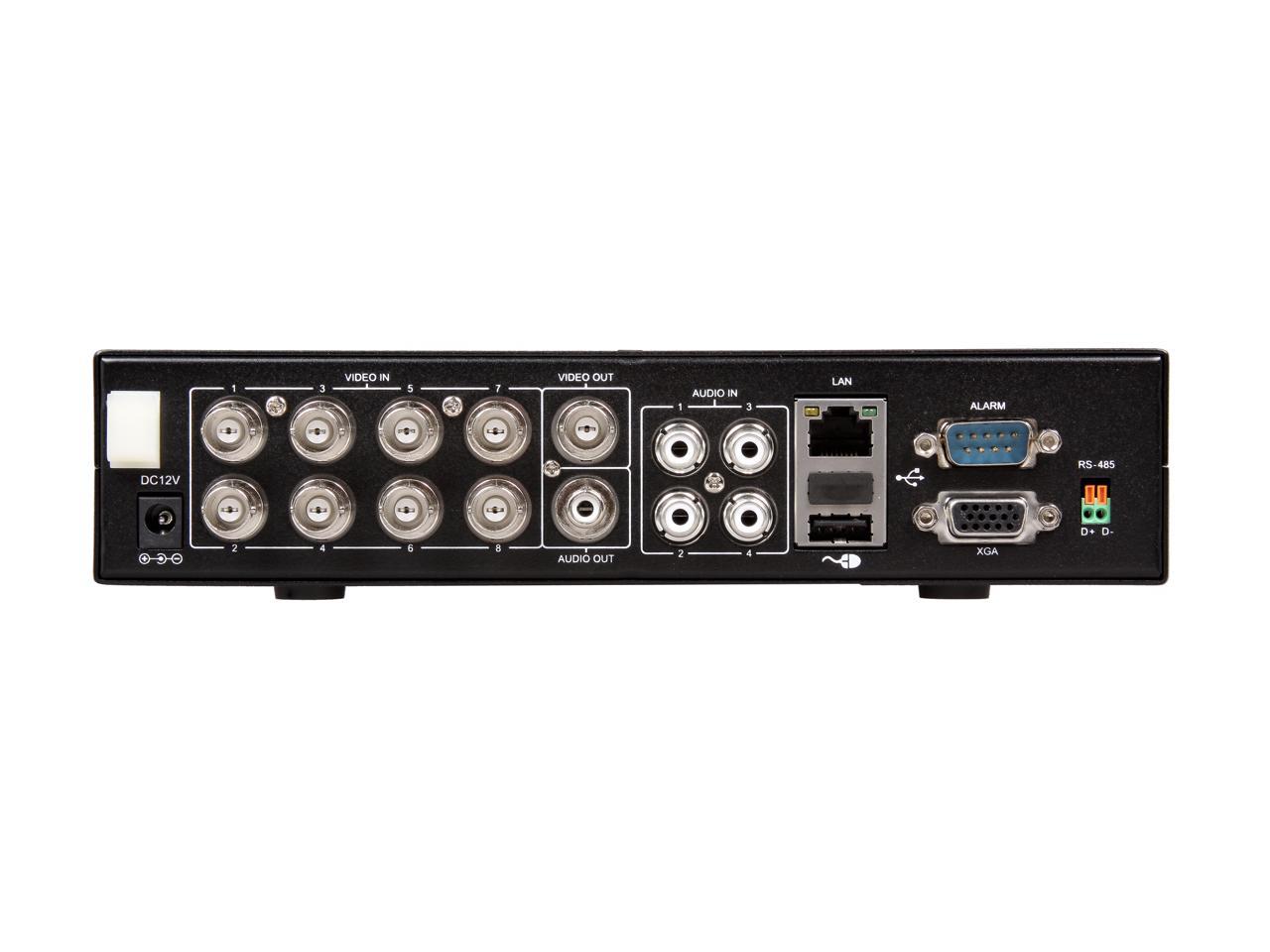 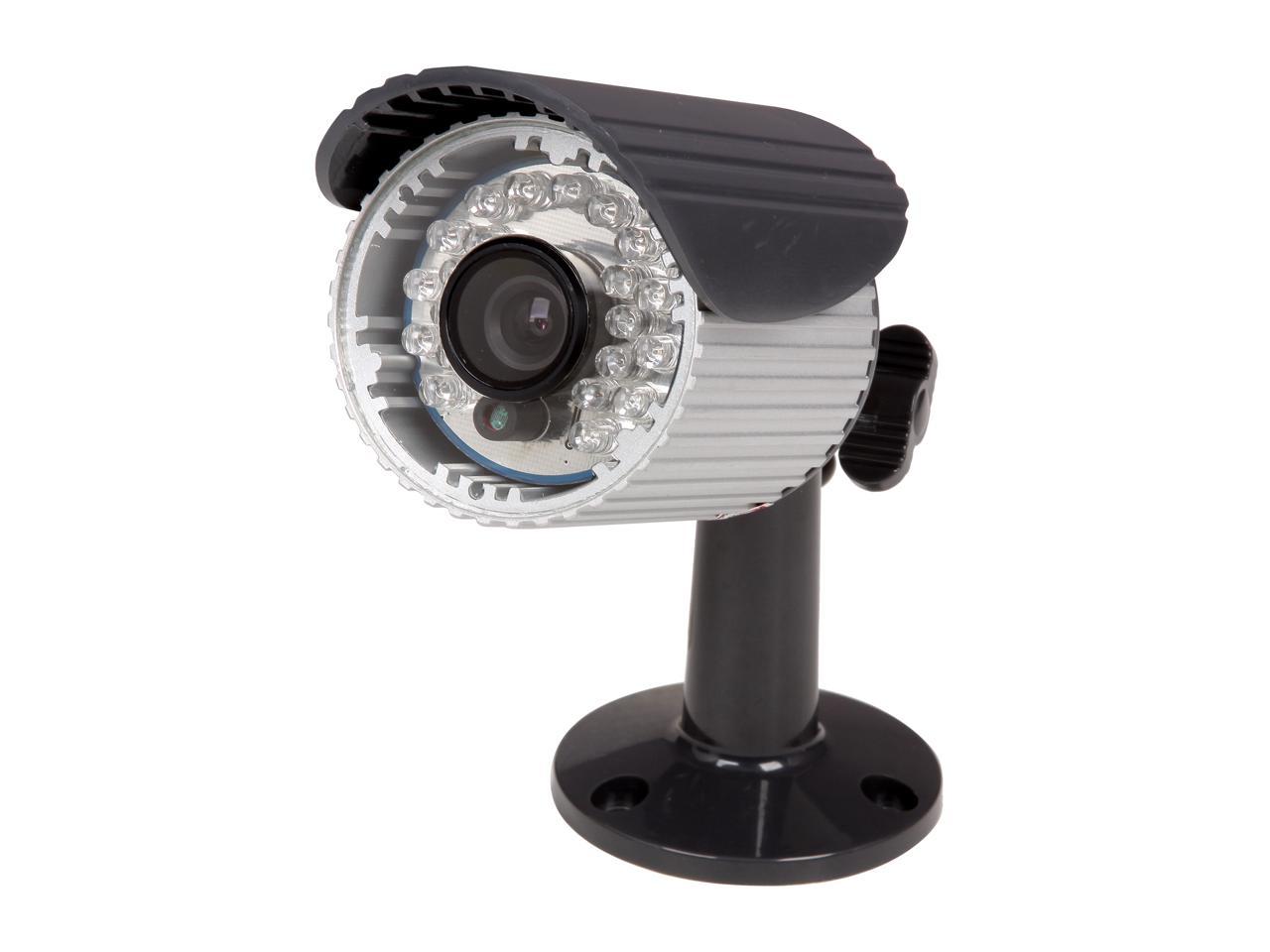 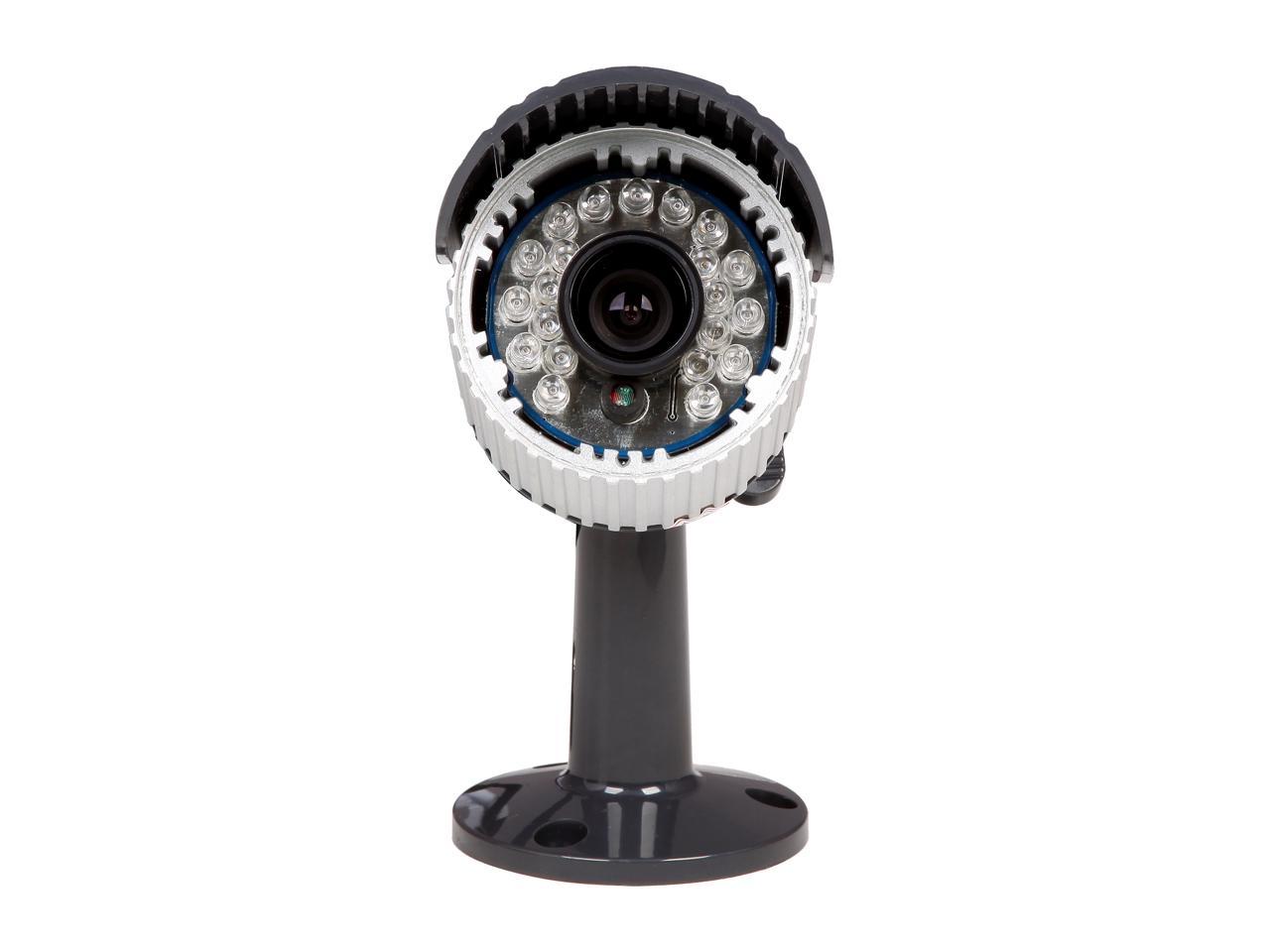 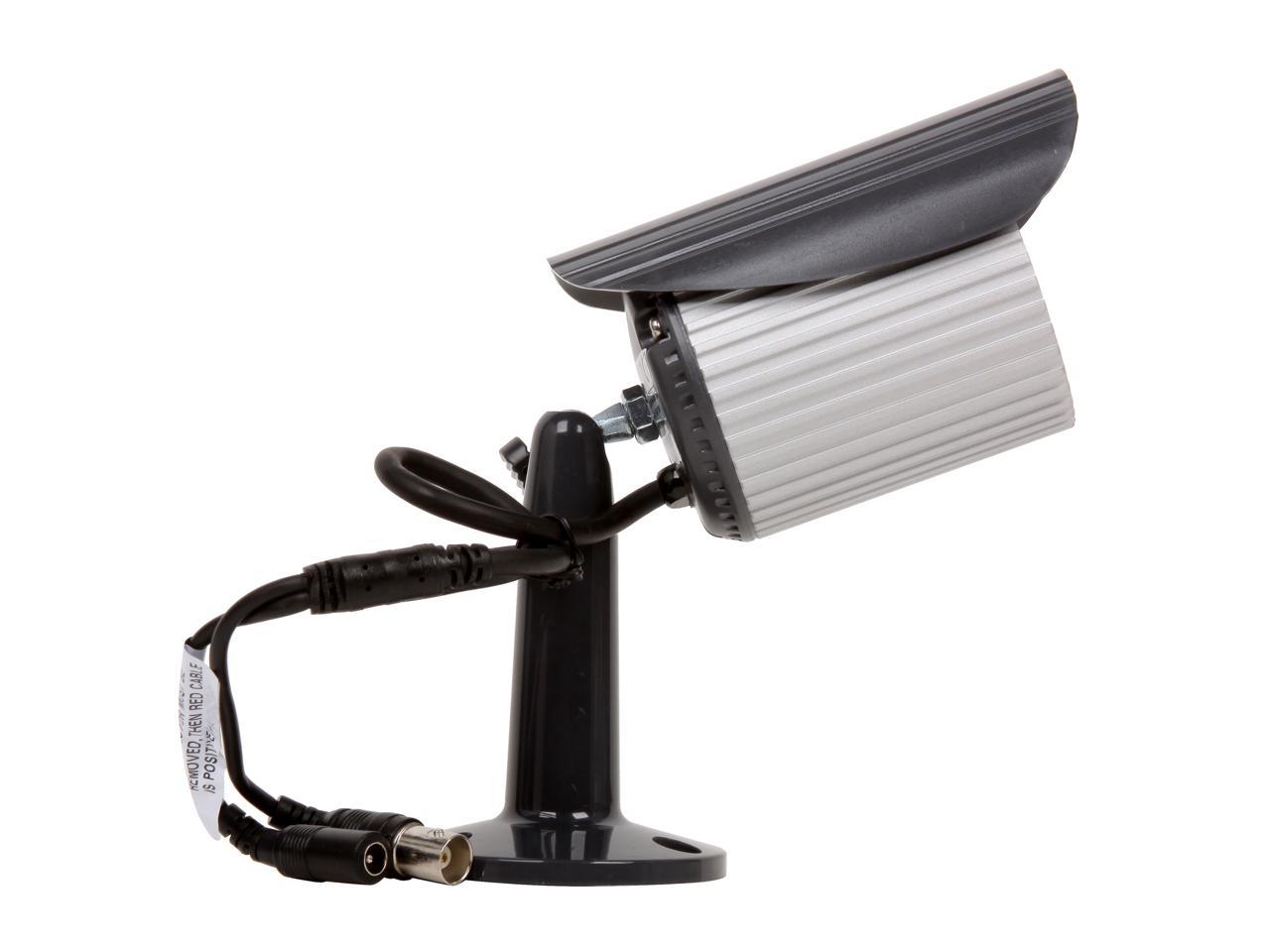 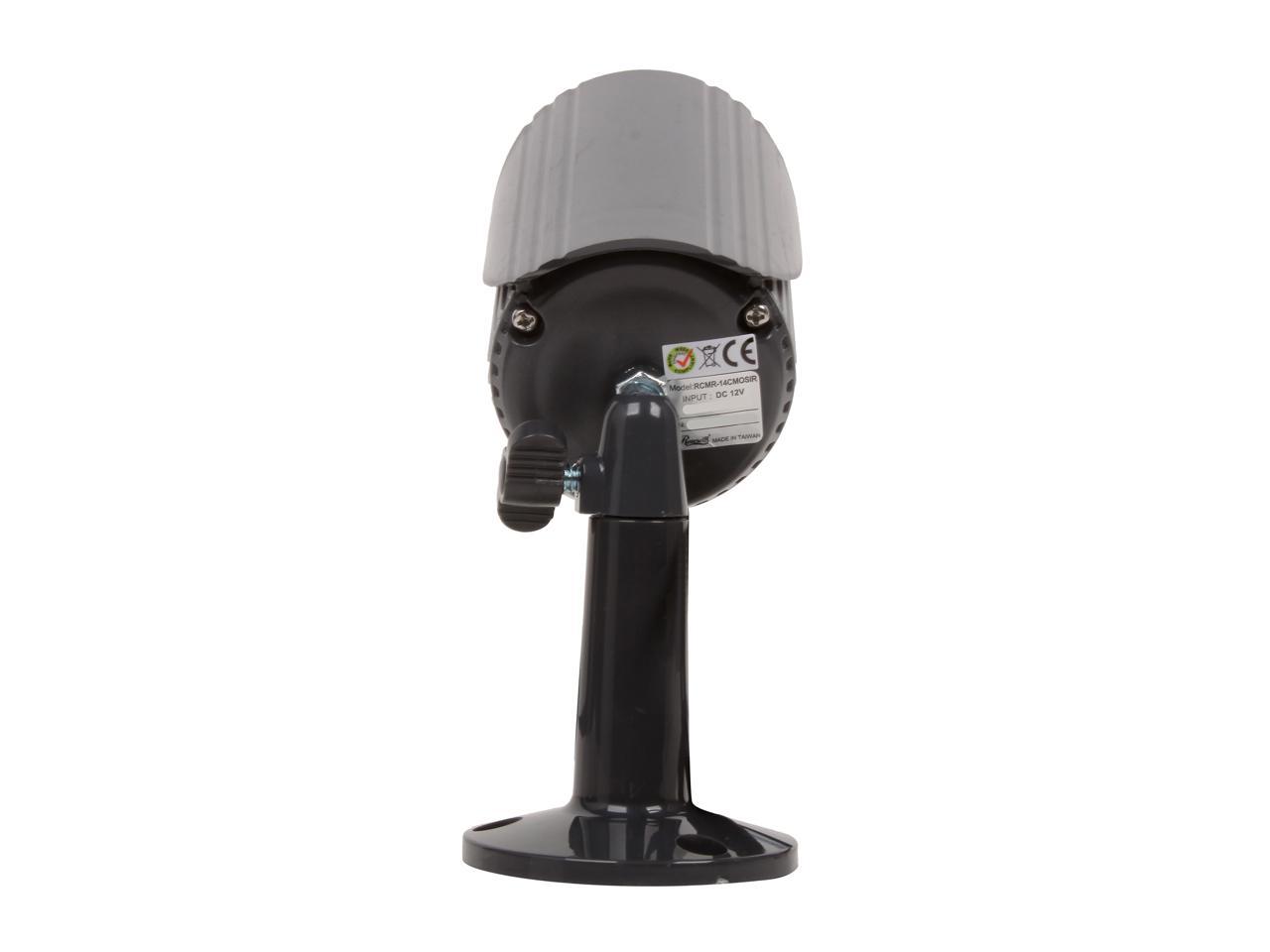 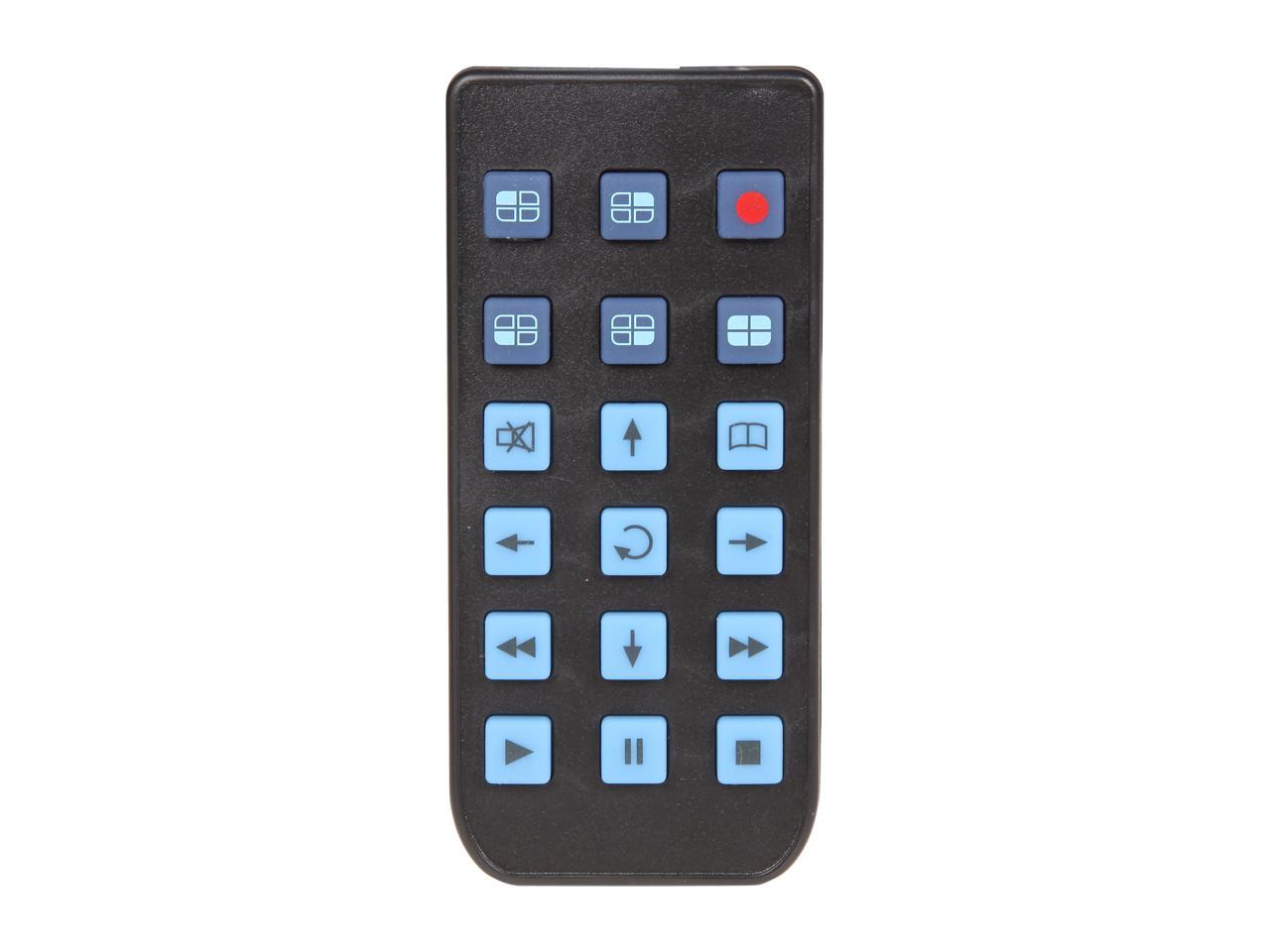 The 4 cameras utilize a 1/4" CMOS sensor to produce 420 TV lines of resolution and can be used indoors and/or outdoors with IP66 Weather Proof rating. The camera’s 21 powerful IR LEDs produce high quality image in complete darkness.

Learn more about the Rosewill RSVA-12001

Pros: This system is very effective, provided you have the patience to set it up. You can use it remotely to view the cameras from a PC or your smartphone through an app called "Castillo Player" (I don't know if this is available on Iphone. Don't own one.) I have the motion sensing set up to send emails to a dedicated account that informs me when someone comes to the door. My cell phone is set up to receive the emails on the account and vibrates. I can just pull out my phone to see who it is immediately. Didn't expect to be able to do that. Cameras have decent resolution. 720x480. How much you can actually see varies, but it's good video quality in the day time. Connection to network was a breeze when it worked. Setting up Castillo player was a breeze too. Just make sure you have screen rotate on, otherwise you'll end up like half the people on the comments for the app complaining only one camera works. Has to be vertical to display the UI. The mounting hardware was plastic, but very sturdy and simple to adjust. All the hardware worked out of the box (Accessories. See below.) The power supplies are boldly labeled so you wont confuse them like I almost did. If you really want a treat just check out the manual online. Tons of features, and it's a breeze to set up. Provided none of the things below happen to you. I highly recommend this DVR, and below are the frustrations I encountered. No eggs were deducted, as the hardware has functioned beyond my expectations.

Cons: These are problems you may encounter: Comes with 4 cameras. The software on it automatically sets all the framerates to 7 on 8 channels. You'll have to change this to 15 on the first 4 if you don't want this... I wasn't surprised it didn't automatically detect there were only 4 cameras installed but it's worth noting. The disc it came with was damaged and unreadable. The top layer in which the aluminum was applied to the plastic disc had lifted off cleanly. The disc read on the top, "Application software" and "User Manual". I contacted Rosewill customer support and told them their website didn't have the "application software" that was included on the disc. It only had a .fhf file which was not explained the purpose of. They told me to change the extension from .fhf to .exe. I tried several different formats. After an hour or so, I used hex editor to realize it was a non-windows based program. I found out eventually rosewill unit itself it was a firmware update. Still no word on the "Application Software", whatever that may be. I think it was something just scribbled on there. I've been able to perform all my desired operations with just the help of the manual alone. It included an RJ-45 cable. Wonderful. Plugged into the DVR and the router flawlessly. I spent about 45 minutes bashing my face into the keyboard trying to figure out why I couldn't ping it after I set all the network parameters correctly. Then I ripped it out and inspected it. It only had 2 pins used. I had to use another RJ-45 cable. I thought it was an RJ-11 cable after inspecting it, but it really had RJ-45 connectors on it. After researching it, I have no idea what it was intended for. This isn't even displayed in the packing contents so I have no idea how it got there. It did come from the box, in the back by the power cables, and it was wrapped in plastic wrap. The mouse for the DVR is less responsive at higher display resolutions. It's also less responsive if you plug the mouse in the front USB port. The DVR would sometimes freeze when performing operations through the UI. Haven't had this issue on the new firmware. Also, prior to update of firmware, using UI would randomly change some settings. The remote connection through browser requires ActiveX controllers. So. Internet Explorer only for now. I can't figure out the remote control. Mouse control works fine for now I suppose.

Overall Review: Statistically speaking, camera systems reduce the likelihood of a theft by about 50% just having them visible. Understandable that it's not a fix all solution, but better than nothing. Put in a 1 terabyte hard drive, 391 hours of recording time at 480p@15hz. More than I'll need for when I go on vacation coming up soon. Nice to have some piece of mind. And the ability to check it every 2 seconds? Oh yeah. I highly recommend you update your firmware first thing, based off of my experience. If you don't then when you do it later your settings will all be reset.

Pros: Real time Smart Phone viewing-just installed Castillo player on my Android phone and put in the Server/User/Password and connected immediately . Relatively easy to setup the internet access stuff-just have to know how to do port forwarding on your router and setup a DDNS-If you download the manual it actually shows you how to setup a DDNS if you don't know how. Email notifications to your inbox within a couple of minutes of motion detection-would be nicer if it was a litter quicker though. Cameras have pretty descent picture for the price of this unit. Good length to the cables. 8 channels for future expansion. There are some other useful features as well with regard to the alarms.

Cons: Got a bad camera-wouldn't switch to night vision and kept capturing images when there was nothing there to set off the motion detection. No HDD-makes it a bit more expensive if you don't already have one to put in it.

Overall Review: I think this product has a good quality/options to cost ratio and would recommend it as a basic CCTV system for a average sized home. With a 320gb HDD and the 4 cameras set to 720x480 (max res) I get 169 hours of record time. Automatic overwriting is configurable and you can easily search the logs for motion/alarm/etc

Pros: Worked right out of the box. Setup was easy and quick. Used 1TB WD sata drive turned it on and it formatted. Using the 4 supplied cameras with highest video settings I get about 500 hours of record time. Only takes snapshots when motion sensor is tripped and sends me the pic in an email.

Cons: If you really aren't very tech savy you probably will have issues setting this up. The directions that come with it are very limited just like all directions that come with Chinese manufactured goods"they always seem to lose alot in thier translations". As far as the browser issue I saw in one post I had the same issue until I installed the pluggin that is on the disc that came with the kit. As I said little or no real directions.

Pros: Has a lot of capabilities, directions are terrible and the remote access is very difficult to set-up however; it is a great start system and lots a features. Contact you internet provider first for remote set-up...that will save yo a ton of hair pullage.

Cons: quirky, be prepared to spend some time on this setup, if your not tech savy...may the good lord be with you.

Pros: Great DVR, cables are plenty long to get everywhere. Cameras have good resolution, day/night. Would recommend for an economic system.

Cons: Already had 1 camera die and have only had system a few months. Camera was just dead, no signal, replaced with a spare. Going to call tech support and hope I can send back for a replacement.

Overall Review: I am hoping that I dont have to send the whole thing back. I have all 4 installed and cables run.

Pros: This was my first surveillance dvr and it didn't take very long to set up and see the dvr on my LAN. Learned a lot about networking and routers to get this to work on the internet. Pretty low price for a 4 camera dvr.

Cons: Connecting up to the internet took much longer than expected. Mainly because I didn't know you couldn't use your own IP internet address to call up your own dvr. I called Rosewill service a few times with network questions and they were somewhat helpful, but did not solve my problem. The manual doesn't explain anything about the functionality of most controls. It was pretty much useless, and you have to learn by trial and error. I'm still not sure about most of the controls. I learned a lot about dvr set up and networking by watching YouTube.

3 out of 3 people found this review helpful. Did you?
Manufacturer Response:
Dear Valued Customer, Thank you very much for purchasing this unit. We strive to provide the most reliable and highest quality products to our customers. Sounds like your product may be defective please contact our support team to assist you with warranty options. Phone: 1- 800-575-9885 Email: rma@rosewill.com We look forward to hearing from you. Thanks,d Rosewill Customer Care
Melanie S.
Ownership: 1 month to 1 year
Verified Owner
Software kills the experience11/11/2013 8:37:49 AM

Pros: Cameras are decent. Cables are long. Unit is small

Cons: Software is HORRIBLE. Software via web browse/PC crashes constantly and is slow, especially outside of the LAN (home network) Bad drivers, no new updates available

Overall Review: This could be a great unit if the software was up to par. I would not recommend based on the software glitches for remote administration/viewing.

2 out of 2 people found this review helpful. Did you?
Manufacturer Response:
Dear Valued Customer, Thank you very much for purchasing this unit. We strive to provide the most reliable and highest quality products to our customers. If you are not fully satisfied with our product please contact us to better assist you in resolving your problem. Phone: 1- 800-575-9885 Email: rma@rosewill.com We look forward to hearing from you. Thanks, Rosewill Customer Care