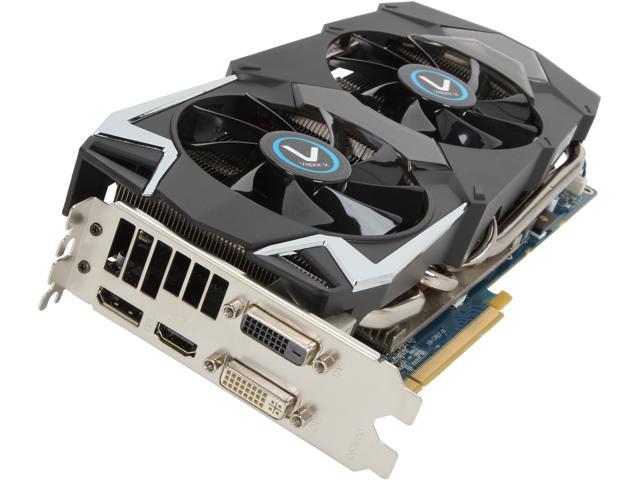 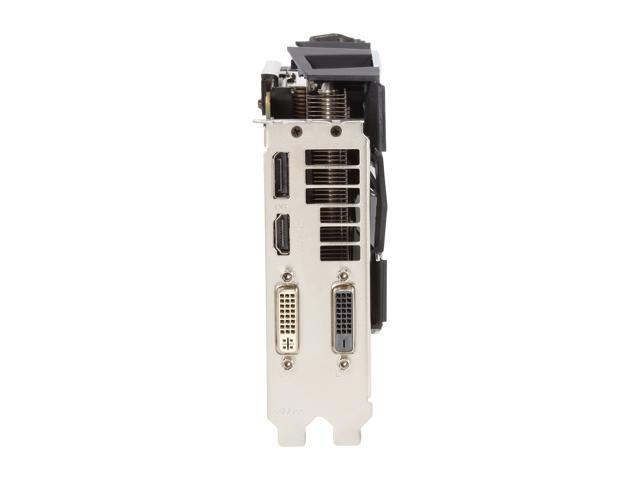 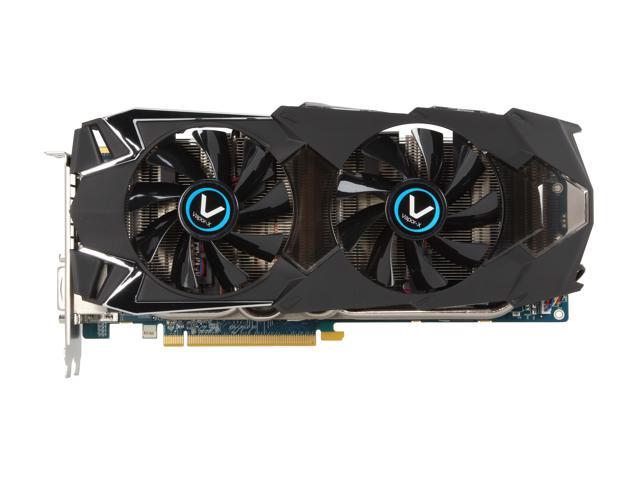 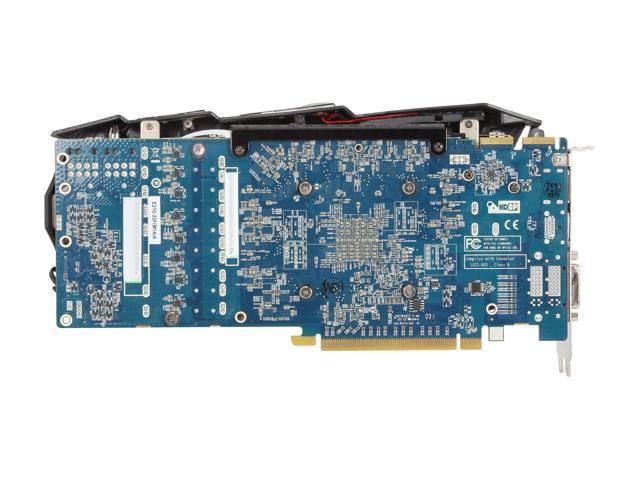 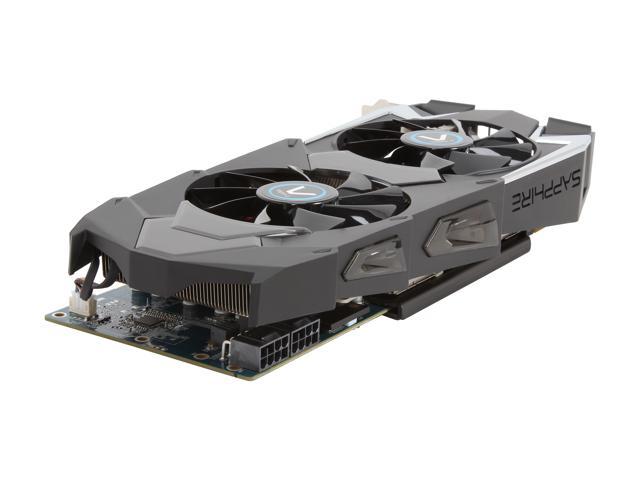 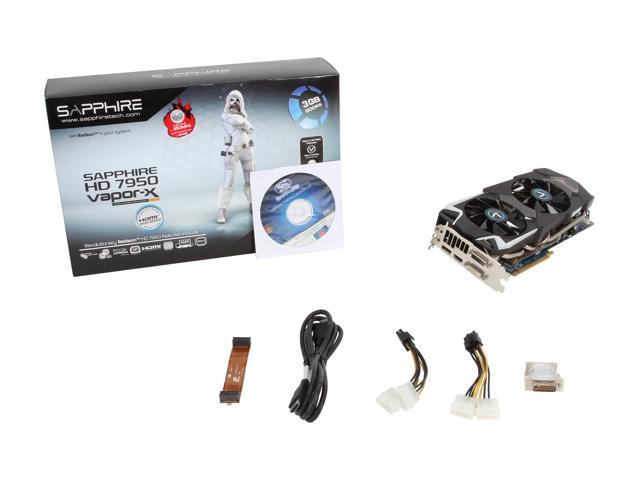 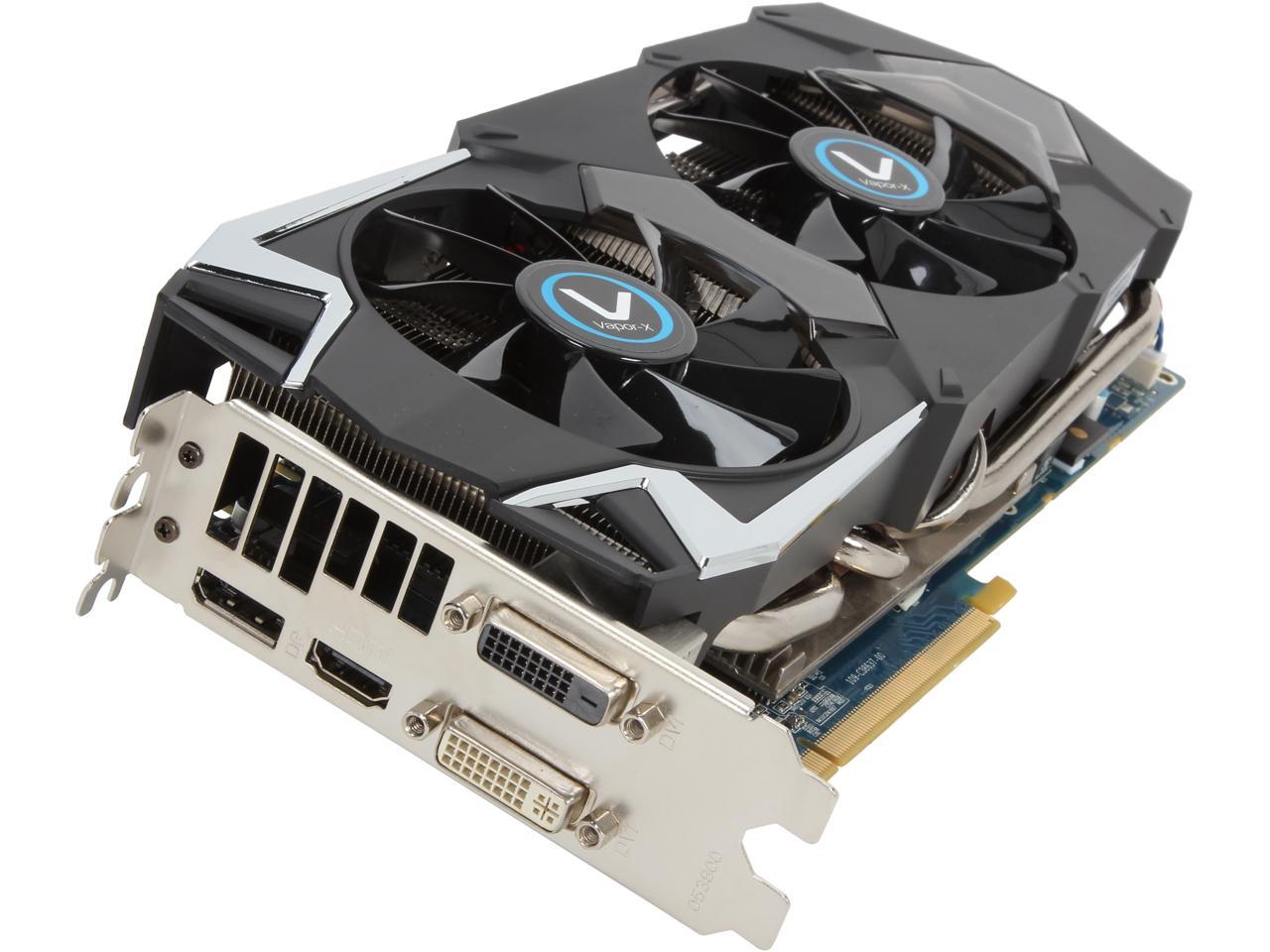 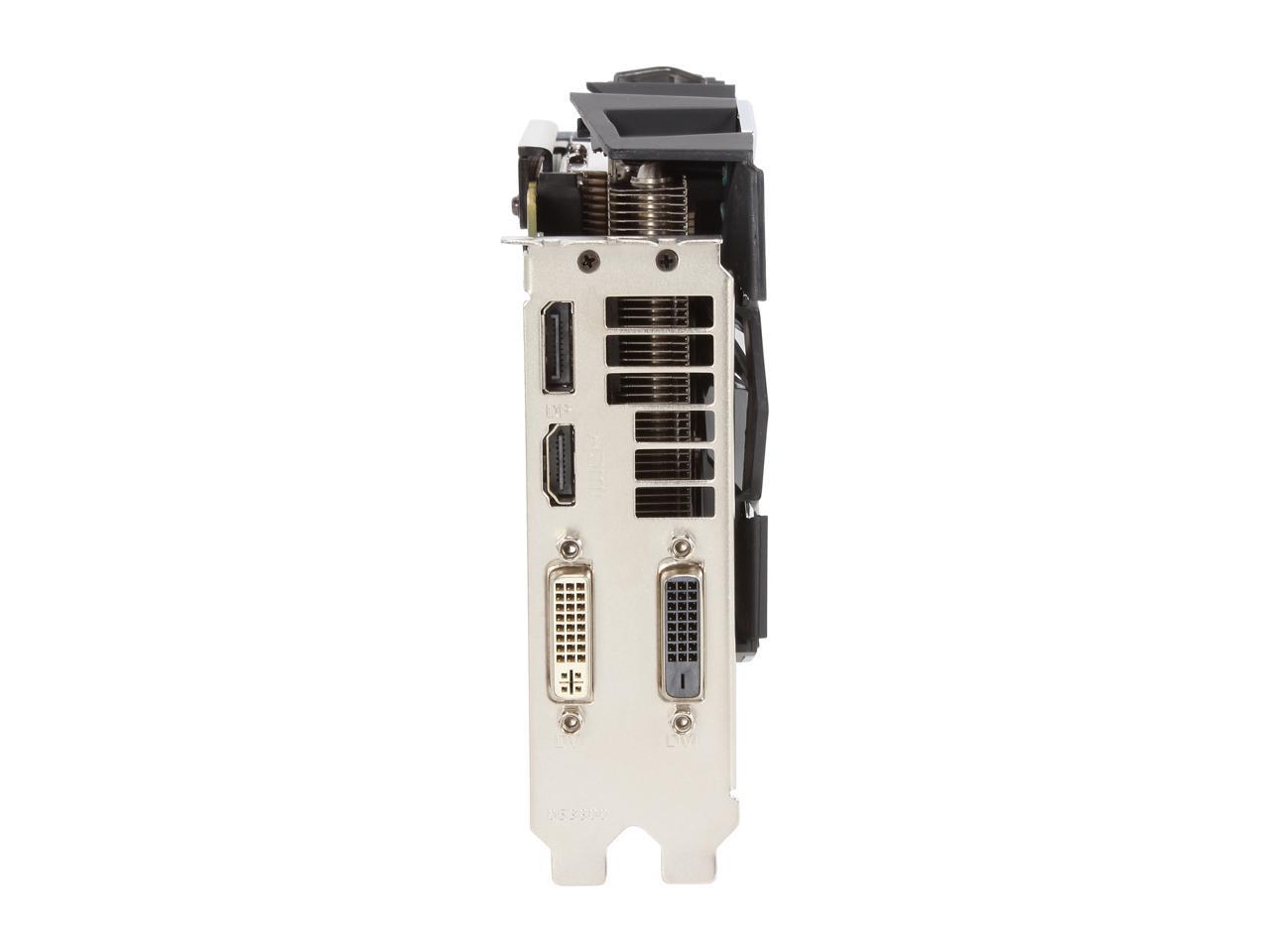 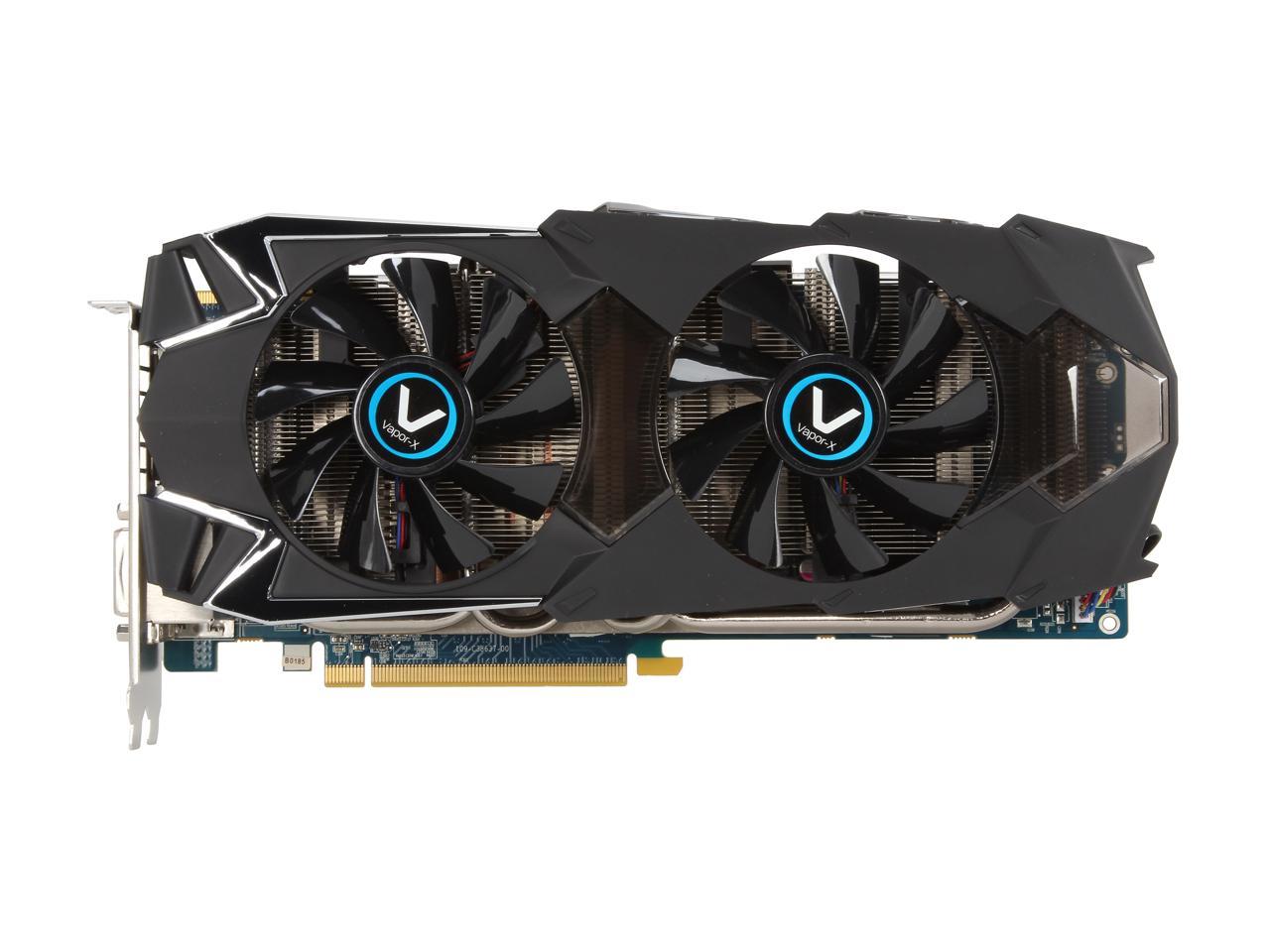 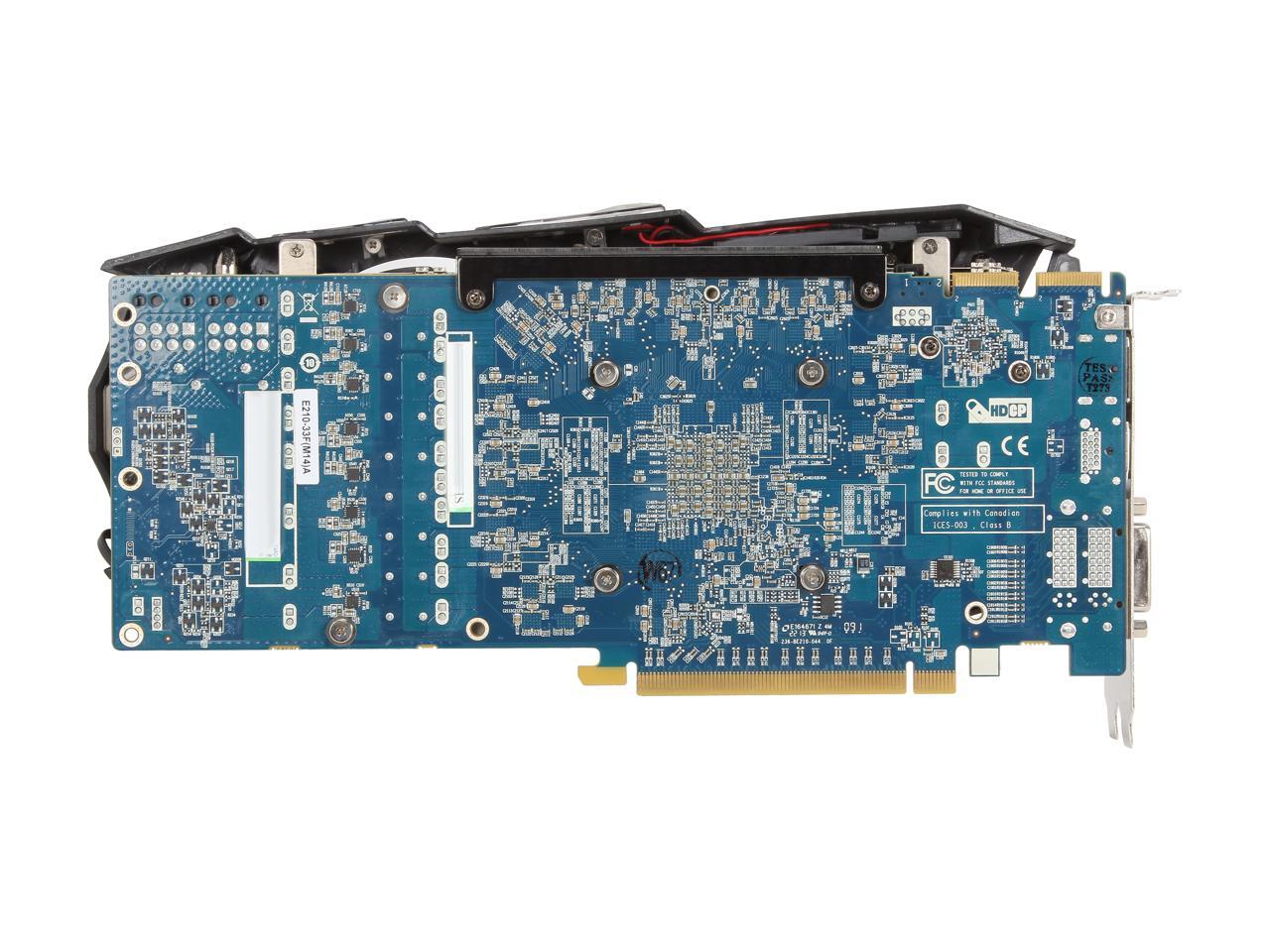 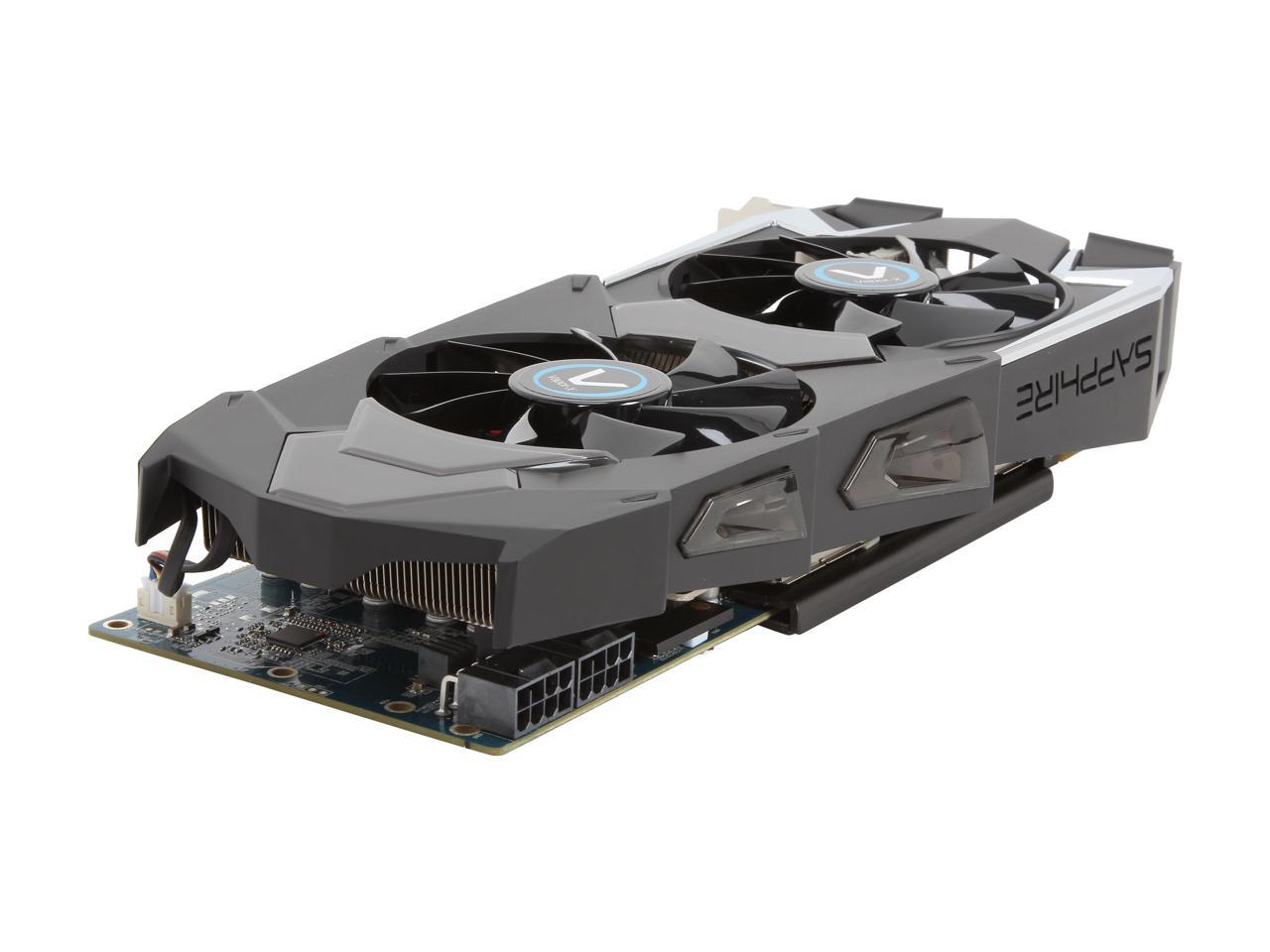 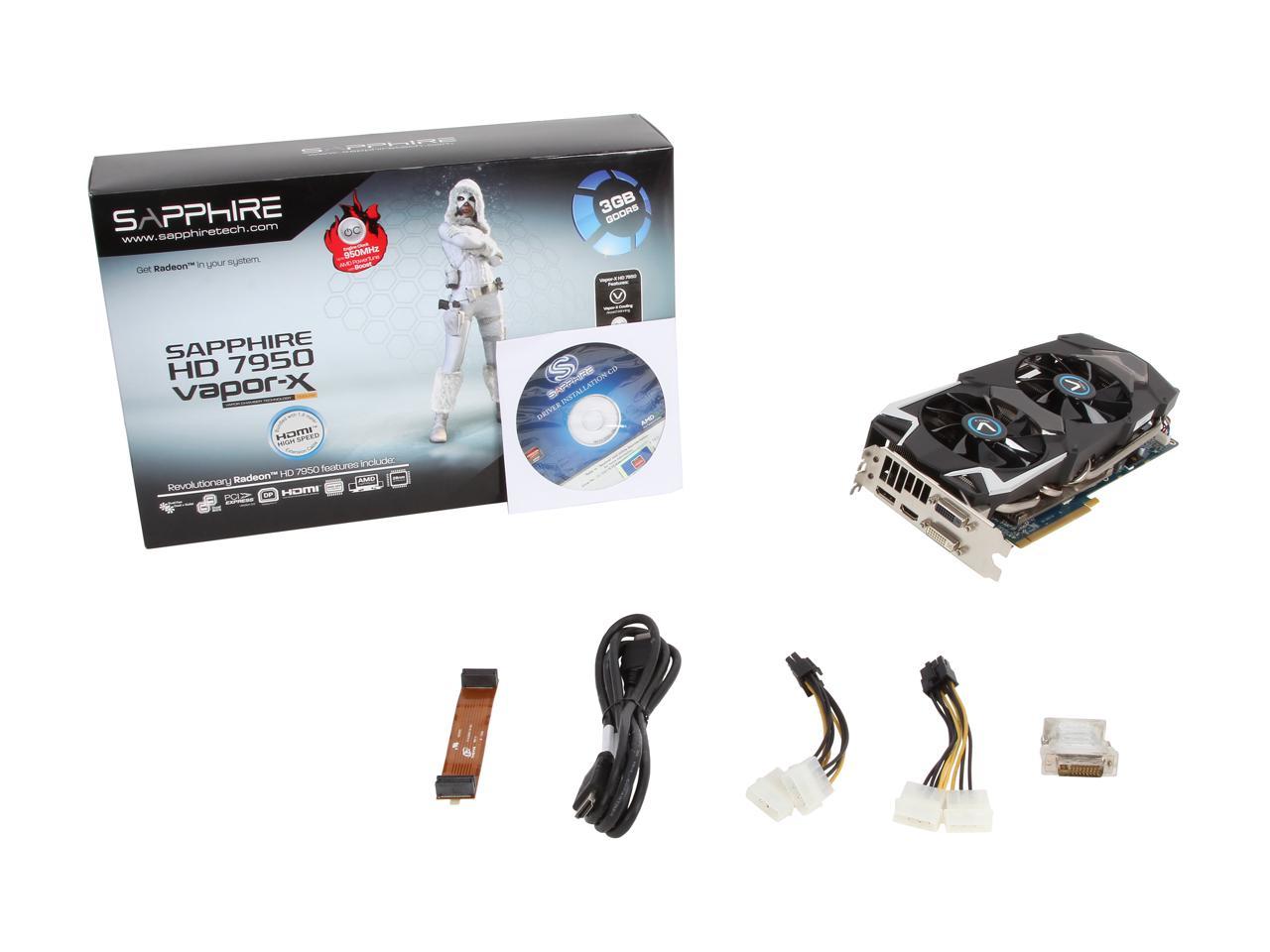 Step up to the SAPPHIRE Vapor-X Radeon HD 7950 VGA card for a new level of gaming experience in the latest FPS, RTS, MMORGP and RACING titles. It's based on the cutting-edge 28nm GCN architecture and built around 1792 Stream Processors and 3GB/384-bit GDDR5 memory that deliver reality-redefining visuals with stunning picture quality and environmental interaction. This card has latest GDDR5 memory clocked at 5000MHz effective, and runs with a core clock speed of 850 MHz which with PowerTune Dynamic Boost rises to 950 MHz on the engine. Vapor-X cooler is based on a new vapor chamber design and delivers exceptional thermal performance you can rely on even during extreme load condition. Versatile output configuration of DVI-I, DVI-D, HDMI and DisplayPort offers flexible connection to one or multiple displays.

Pros: Works as expected, cooler has a decent noise/cooling ratio, overclocking is expected to be quite high however I have yet to need it in crossfire at 5760x1080. Just press the button in on the card for the small boost speed at 950mhz core (memory clock stays the same).

Cons: All cards shipped are not the same. I had bought 2 of these, however at different times. First comes with the expected 6+8pin pcie power, the second comes however with 8+8pin. Model#/SKU is pretty much the same according to what is printed on the board. Over clocking was pretty limited on the 6+8pin board at stock voltage, I have yet to try the 8+8 pin one however as I'd like to keep them the same frequency in crossfire.

Overall Review: I believe according to other reviews, you should only be getting the 8+8pin boards now, so be sure to be prepared for 8+8 vs the 6+8 the picture shows. Everything else is exactly the same however so you shouldn't get two different boards like I did if you buy now.

Pros: Where to begin: QUIET - Very impressed with how quiet this card stays even under 100% load. Much quieter than my previous Radeon 6950. FAST - Experienced large frame rate gains in games such as Counter-Strike:GO, Dota 2, Farcry 3 Blood Dragon. In CS:GO for example, I went from 120 FPS on medium settings to 160 FPS on almost all ultra settings. ONE BUTTON OVERCLOCK - With one button the boards BIOS is switched from the stock 7950 850mhz speed to the boost edition speeds at 950mhz. Easiest overclock ever. Decent range of ports. 1 DVI dual link, 1 DVI single link, 1 HDMI, and 1 display port. 4 free games(as of May 2013): Bioshock Infinite(Steam), Tomb Raider(Steam), Crysis 3(Origin), and Farcry 3 Blood Dragon(Uplay). I would have much preferred DRM free .exe of these games or at least all of them on one platform(steam), but they were FREE, hard to complain.

Cons: HUGE - Read the dimensions carefully and make no mistake, this sucker is long and large. It barely fit on the bottom PCI-E slot of my MoBo in my Cooler Master CM690 II Case. Requires 2 8-Pin connectors, not 1 8-pin and 1 6-pin. Not sure why the 'Details' tab here on Newegg is still inaccurate about that. There seems to be a lot of confusion in this area.

Overall Review: Overall this is a great card for your money. Even stuck on an older CPU like mine(Phenom X6 1100T) at stock speeds I saw very considerable gains in most app's performance.

Pros: This card is a beast and like a beast I first had to tame it (more on this in the Cons section). Right out of the box I was taken by how awesome the card looks in person. Yeah, there are pictures on the detail page but they just don’t do it justice. It looks even better once installed as It has a blue LED light and the Sapphire name is also illuminated. After I installed the latest drivers (13.1 as of this writing, see below) the system rebooted without a problem. Within minutes I had Crysis 3 up and running on high settings. Nice! Even after all the drama I explain in the Cons section, I’m fairly happy with the card. I guess I’m more relieved than anything, as I won’t have to pay to have the card returned or have to wait for a replacement. With Bioshock Infinite releasing 3/26/13 it was important I get the card up and running. And running it is (Knock on wood)! I was able to even overclock the card with little issue. For my build, the card is stable at 1155/1500. With Unigine Heaven, after overclocking my benchmarks increased 102% (stock settings: 78 fps score of 1959, overclock: 158 fps score of 3983). It runs Crysis 3 beautifully on high settings, and Battlefield 3 is no problem whatsoever. Even at full load the card stays below 64 Celsius, and the fans rarely go above 46% when under full load. Pros: -Powerful card -- it's a beast! -Good performance for the price -Cool temps (65 full load, 45 Crysis 3 High) -Fan is very quiet, hovers about 46% of usage on full load -Overclocks (1155, 1550, +16% power usage)

Cons: The day after the install, things weren’t so smooth. The computer would freeze at the Windows loading screen, and if it did happen to get past that point I would encounter a blue dump screen. I tried booting several dozen times with no luck. After removing the card and starting windows with the onboard display, I cleaned the drivers and tried again with no success. After hours of work I decided to see if I could contact the Sapphire customer service for help -- to my dismay I learned that they DO NOT have an 800 number, the only number I could locate online was for their home office in China and it was for sales. Their customer support consists of a forum style ticket system and it feels as stoneage and off putting as you’d expect, especially if you’ve dealt with other video card companies with real means of customer support (you know, phone support). For the cost of their products you’d think Sapphire could afford to phone support. Nevertheless, I decided to see what they would suggest. Being across the world, their responses came the following day. I took the time to write about the problem (as I did above) and submit it to their ticket forum. Being across the world, their responses came the following day. ”You cannot install drivers without the card installed,”… OH Really? You don’t say! At this point I was pulling my hair out because I didn’t better educate myself on the company. At least I had the option to RMA and try a new card at the cost of shipping it back and waiting for up to 14 days for the replacement. I decided to see if I could fix it myself, since I’d have 30 days to return the card. Turns out it’s the typical problem with AMD cards... DRIVERS. After removing the card, uninstalling the 13.1 drivers I was able to reinsert the card and install the 13.3 BETA drivers. Guess what? Everything started working just fine. I could boot past the Windows loading screen and the system dumps went away. Argh! Cons: -Sorry Drivers (Surprise!) -Coil whine (you hear it every now and then, it's louder than the fan) -Two 8-pins, not 6/8-pin as stated on detail page (not an issue for me, but could be for some) -Poor Customer Support: No phone support, old school forum tickets -Overclocking Software: won’t let you back down a bad input without headaches

Overall Review: Maybe you’ll have issues, maybe you won’t. I did. The main reason I went for this card was because of the perceived value in getting a powerful card with two software titles I wanted. I probably won’t be buying a Sapphire product again (due to their support), but I'm not fully soured on AMD. For now I’m content.

Pros: Everything about the card is a pro. It's cool, quite, looks fantastic and you can run max AA without killing the cards like the Nvidia line. The card has been running flawless no acting up or errors you'll be happy running this worry free on the latest drivers. Very happy with this card hope sapphire carries this quality well into the future.

Cons: Can't really think of any con's wish it came with a different game but that is not even really a complaint.

Cons: - Some Frame rate issues in Max Payne 3 with 12.10 drivers. More a knock against AMD I suppose. Seems to be fixed with 12.11. - Noticed some occasional artifacting on desktop with certain applications. Again, likely driver issue. - No back plate

Overall Review: Overall, this is an excellent card, and I am extremely happy with my purchase. I dock an egg for some of the driver annoyances; however, I give it right back just based on the value of what you're getting for your money. With the $20 rebate, and $150 in games, you're basically getting this card for about $160. That's a steal. I'm normally an Nvidia guy, and originally I was set on a GTX 670, but I definitely made the right decision. The stock performance of a 670 does have a slight edge, but not enough to justify the extra $$$. This 7950 OC will blow away any game on the market right now, no problem. Barring any significant problem in the future, I will certainly be looking at Sapphire and AMD first when it's time for an upgrade.

4 out of 4 people found this review helpful. Did you?
Manufacturer Response:
We are sorry that you have experienced any driver issues. AMD are always working on improving the compatibility and performance of their drivers and we always recommend that users download and install the latest version available.
Ernest M.
Ownership: 1 week to 1 month
Verified Owner
Nice card11/14/2012 6:29:44 PM

Cons: I couldn't O/C the card full in AMD Catalyst overdrive. It would hard lock up on me. But stable at 1050 1400 on clock. Which is still way above the ref card of this model.

Overall Review: I am quite happy with the card and the 3 game deal was a no brainer. I would recommend this card.

4 out of 4 people found this review helpful. Did you?
Manufacturer Response:
We are sorry that you have had troubles overclocking your card. You could try our TriXX overclocking utility to see if you receive better results.

Pros: Huge upgrade from my 4850 X2. Run all games at ultra 1080 res. Borderlands 2, WoW, Warframe, D3, etc all 70+ fps. After installing the card I thought the fans were not working because it was silent, I was the 4850 that made the all the noise. During gaming it is still silent, good card and happy.

Overall Review: Havn't tried OCing it but no need if it works great out of the box.