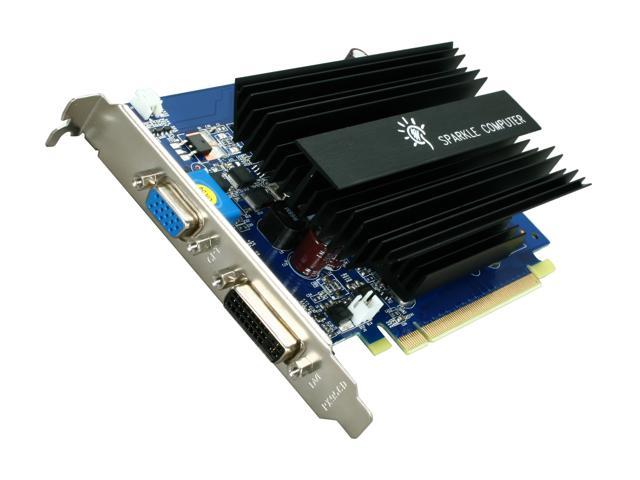 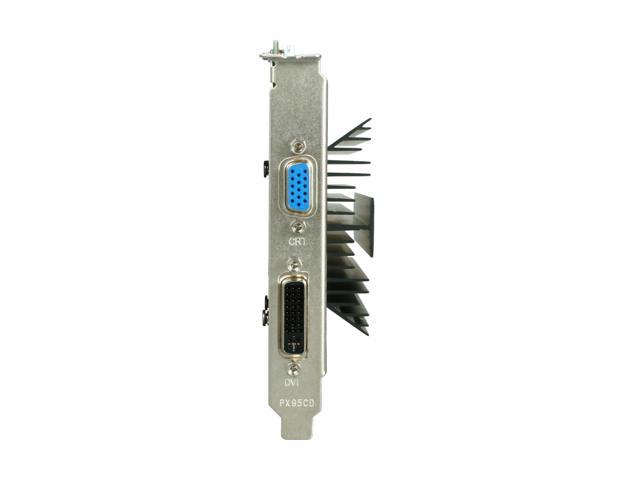 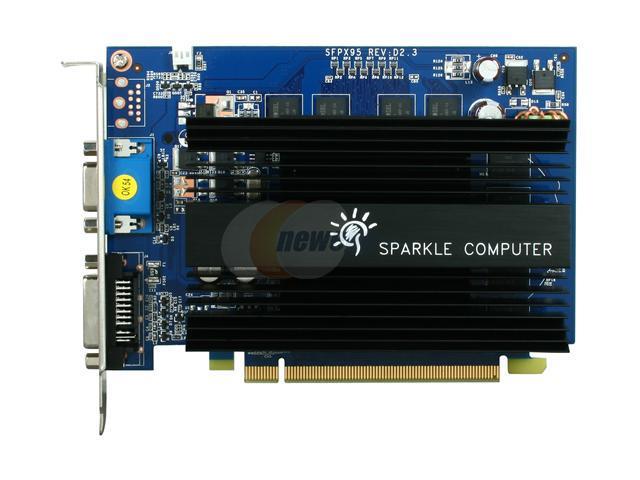 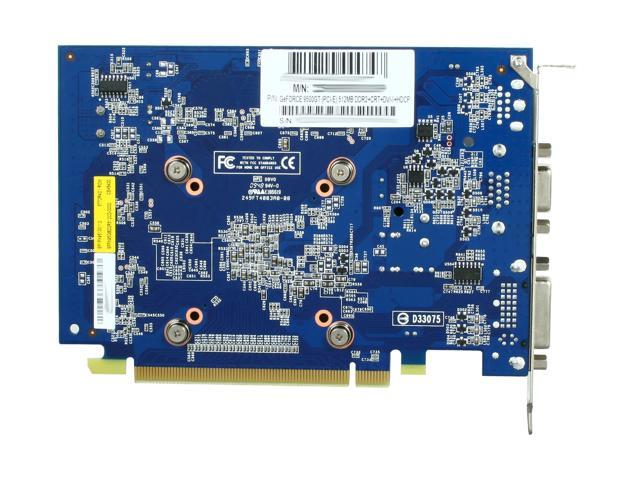 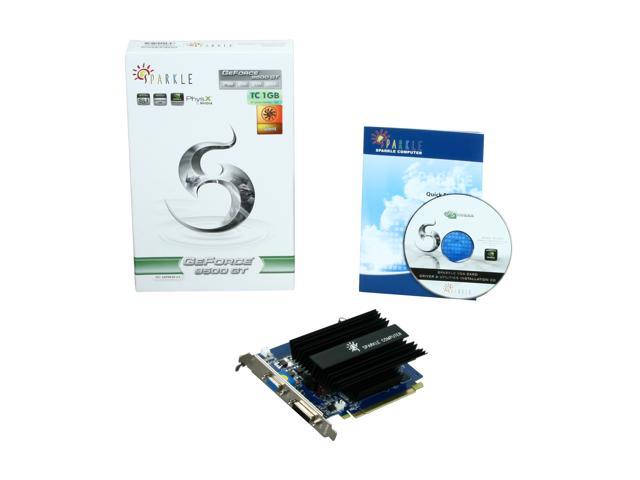 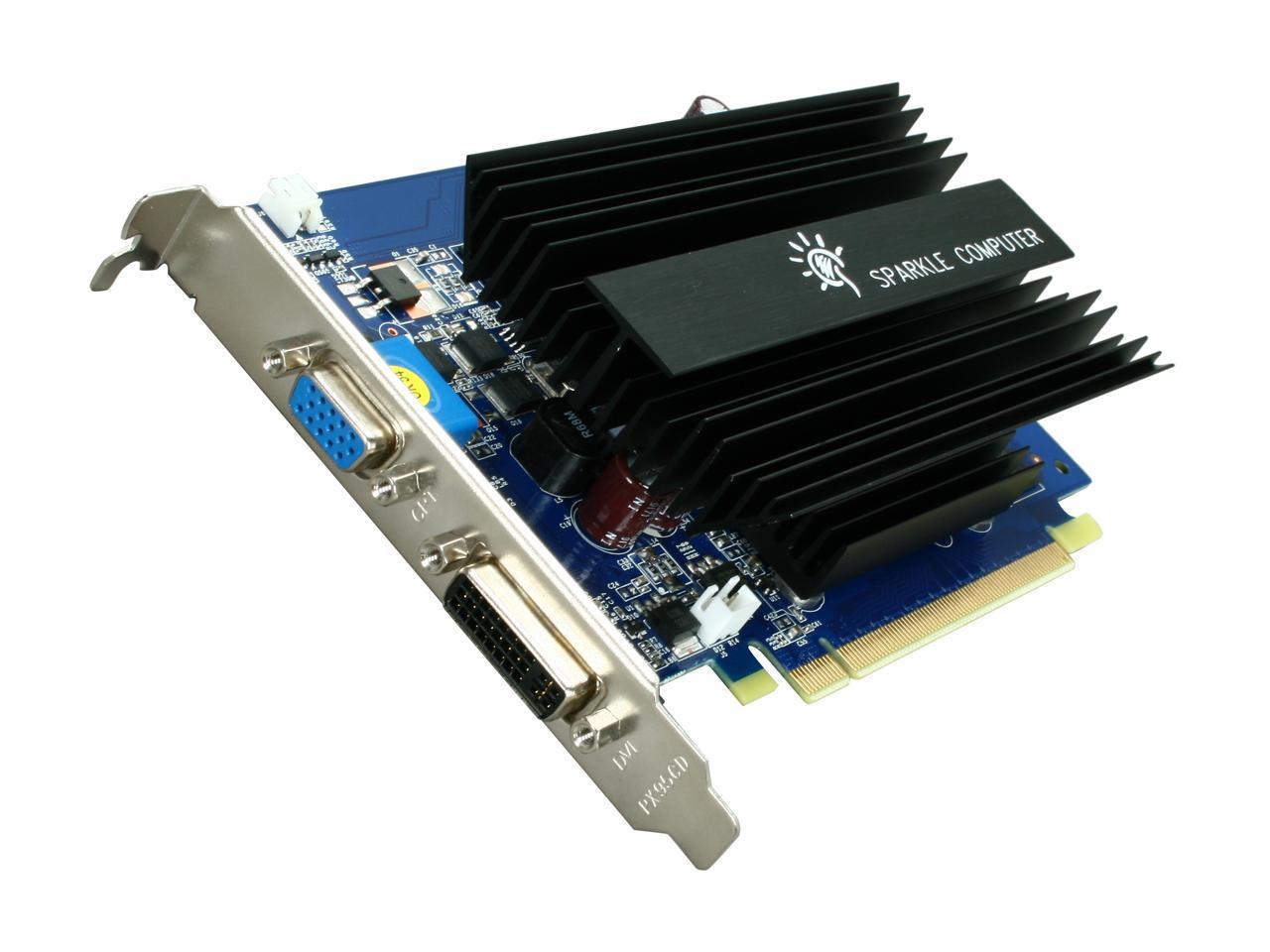 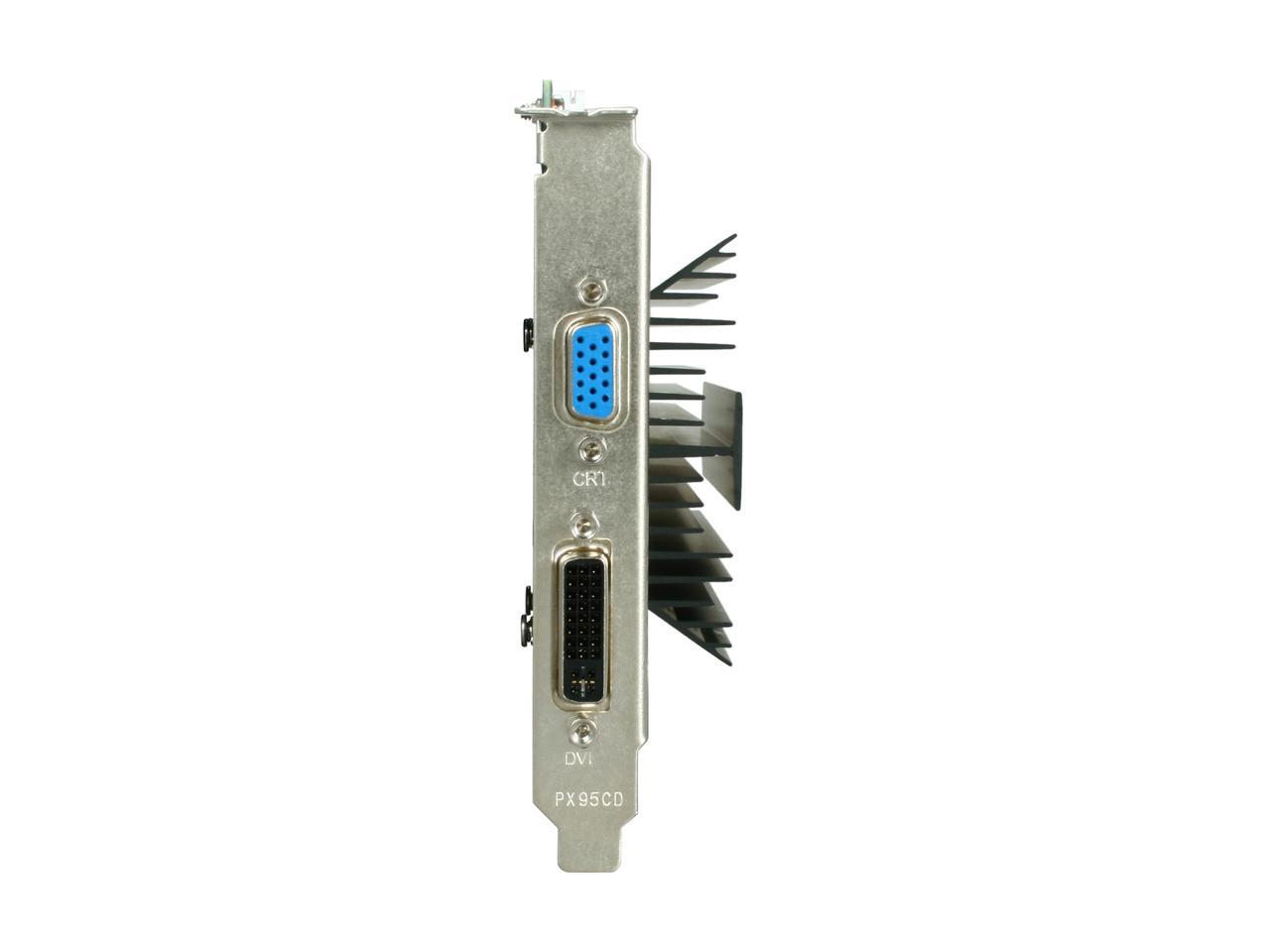 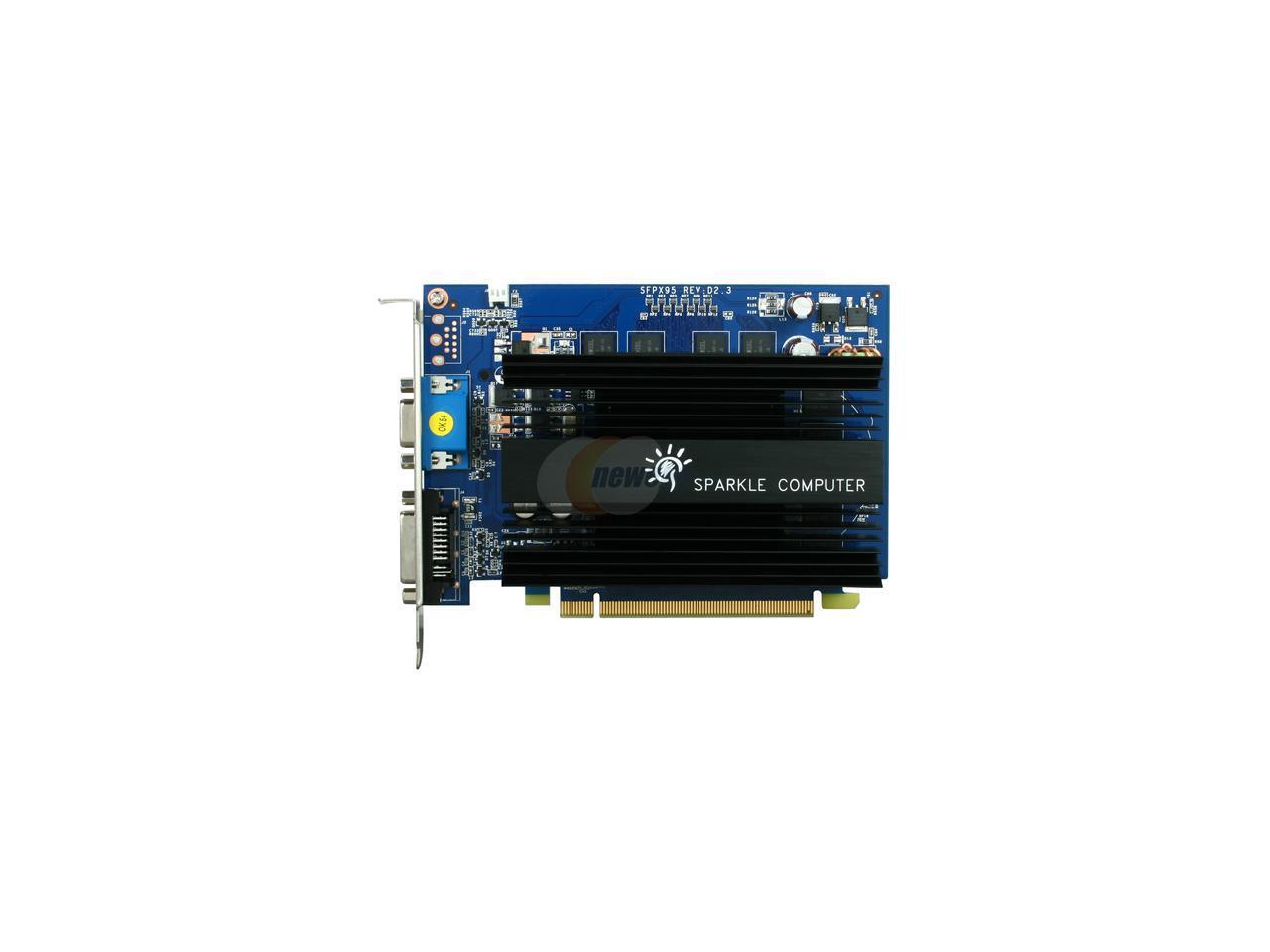 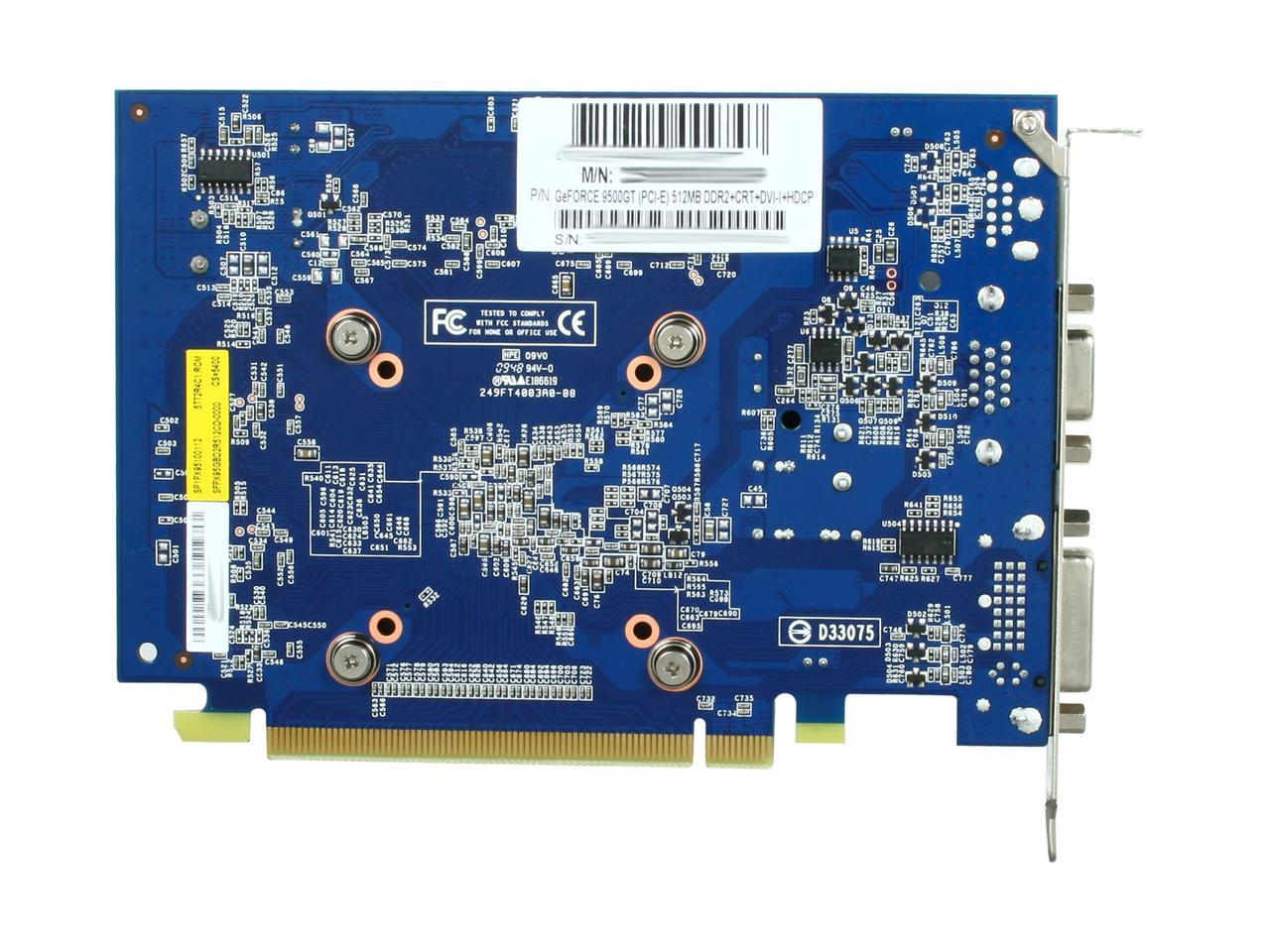 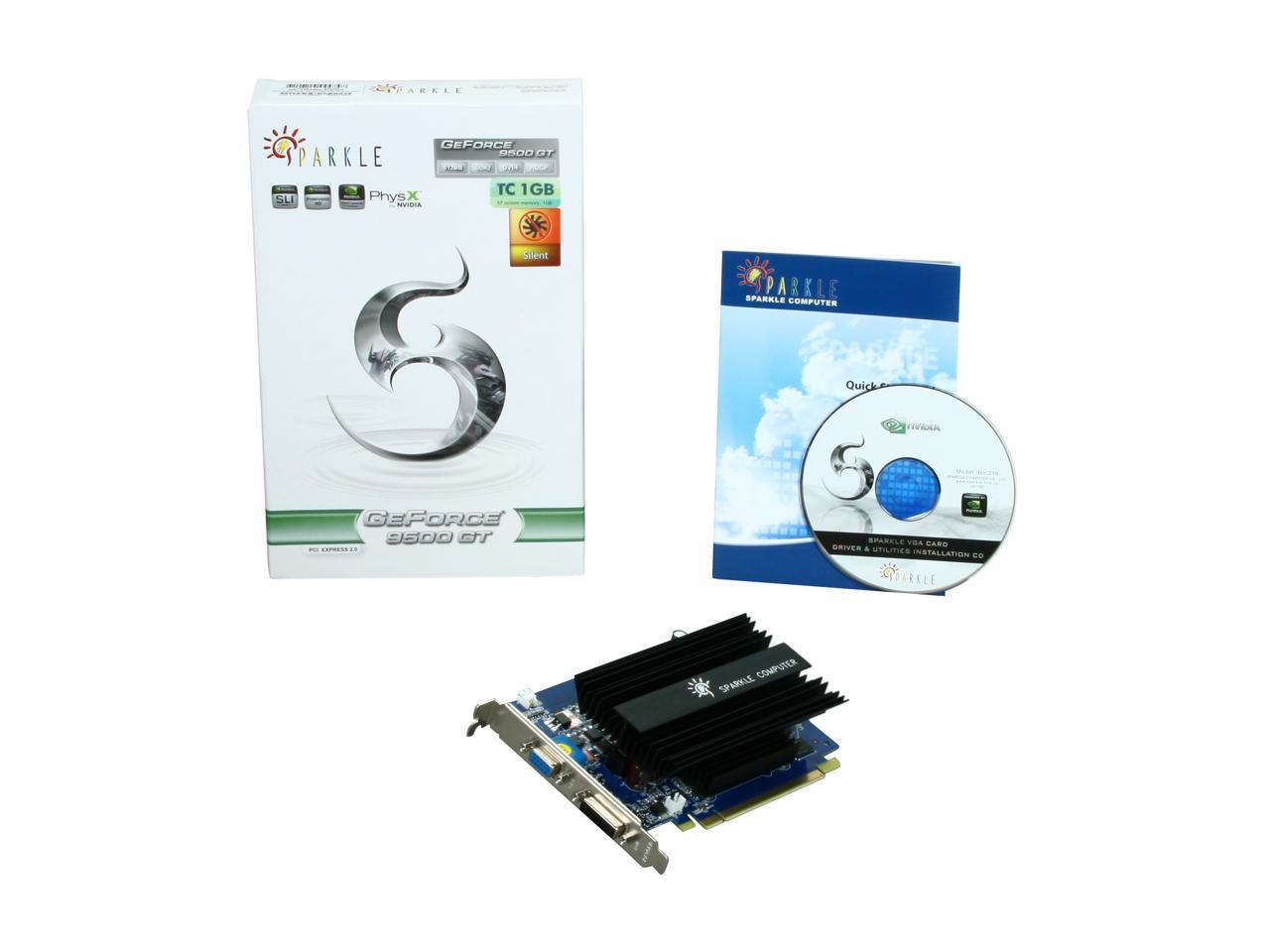 Pros: Runs very cool (cooler than higher-end cards with massive, loud fans - and it runs cooler than my other passive cards). Works great with PureVideo HD. The card itself is rather short, close to the length of the PCI-E slot, so it doesn't cover any motherboard connectors.

Cons: Not the fastest thing for games (but it isn't targeted for that, of course). About half the speed of my 8600 GT (GDDR3). I guess that's what I get for going with DDR2. However, 9500 GT cards with passive heatsinks are slim pickins, and there were none on Newegg with GDDR3 when I looked. Were they all sold out, or just non-existent?

Overall Review: Where to start? First, the card doesn't look like the one in the picture. Mine came with a HUGE heatsink that sticks out further from the card than the one pictured here (like the one pictured on the 1GB card). Second, the card didn't come with the attachments in the picture, so don't buy it with the hopes of getting that stuff. Third, the card has DDR2 RAM, not GDDR2 (there IS a difference). It makes it hard looking up real information on a card when people randomly mix up the DDR2/GDDR2 names.

Overall Review: Two onboard caps are KZG electrolytics. The large passive heat sink is tension mounted with four screws and springs. Even though it is fanless, IMO it still needs to be cooled. The Rocket V coolers are excellent for this. I will buy this one again.

Pros: I use this card with my XFX GTS 250 for dedicated physx. So far from what I have run it is really really good. In UT3, with everything maxed, on my GTS 250 my frames would sometimes dip into the single digits on the physx maps, but with this card as dedicated physx, it never drops below 30 FPS. Similar situation in Arkham Asylum. Plus it doesn't get hot at all... idles at 42 degrees, maxes out at 48.

Cons: I guess it could be a con, but as stated before by other reviewers, it comes with the larger heatsink (from the 1Gb model)... I don't think its so much of a con... larger heatsink=cooler...

Cons: -Runs 60*C idle with my side door off without any case fans. -The heat-sink is not the same one shown in the photo. It's actually has the same heat-sink used for the 1GB version. -It was placed on the wrong delivery truck which went 100 miles away from my neighborhood. It was delivered a day late.

Overall Review: I rarely game anymore so I got this to replace my GTX 285. The GTX 285 is a good gaming card but, when 90% of my time on the computer is watching movies, listening to music or surfing the web it's nice not to have the extra noise, heat and power consumption.

Pros: I do a lot of photography and heavy graphics. This card meets my needs without any issues.

Cons: large profile. you need to have room for this.

Overall Review: Two onboard caps are KZG electrolytics. The large passive heat sink is tension mounted with four screws and springs. Even though it is fanless, IMO it still needs to be cooled. The Rocket V coolers are excellent for this. I will buy this one again.

Cons: None. Running a little warm to the touch, but as I'm not demanding screaming performance thought a fan-less card would be OK.

2 out of 2 people found this review helpful. Did you?
Anonymous
Ownership: 1 week to 1 month
Verified Owner
Supernatural Slient and Sturdy4/6/2009 4:16:28 PM

Pros: Sturdy and efficient fanless heatsink leading to naturally quiet operation. It keeps cool even I reduced the voltages (and thus speeds) of 120 mm rear exhaustion fan and 80 mm front intake fan from 12 volt to 7 volt to keep all quiet. The heatsink reduces 5 - 6 degree Celsius compared to the cheap and flimsy heatsink attached to its sister card (1GB memory version). Performs as good as expected.

Cons: None for card itself as in this class. However, there are no S video to component cable and DVI to VGA/D-sub Adapter that are all shown in one of the pictures on the site. These accessories are one of the reasons I decided to buy the card. The bulky size of the heatsink is not really the problem. Installing another card very close to the heat-generating component is certainly not recommended. That’s why most modern MBO places just an insignificant PCI-e x1 extension slot next to the face side of the main PCI-e 2.0 x 16 slot.

Overall Review: The card is ideal for general purpose users although not for a serious gamer. I really don’t like the fan noise so that I bought all video cards with fanless heatsinks for my PCs. I seldom play games but play movies quite often either online or through DVD on the PCs. I am also doing lots of software programming and analyses as well as graphic processing. Thus both performance and quietness are important for me. I replaced my old slient magic card with this card. The Vista Aero Performance scores raises from 4.2 to 5.0 for graphics and from 4.5 to 5.3 for gaming graphics. The GPU core temperatures drops from 52 Celsius to 40 Celsius when playing a full screen movies (1092 x 1080 in Acer 23’’ LCD). I urge that Newegg update the outdated pictures from the site so that buyer may not get fooled by the wrong information