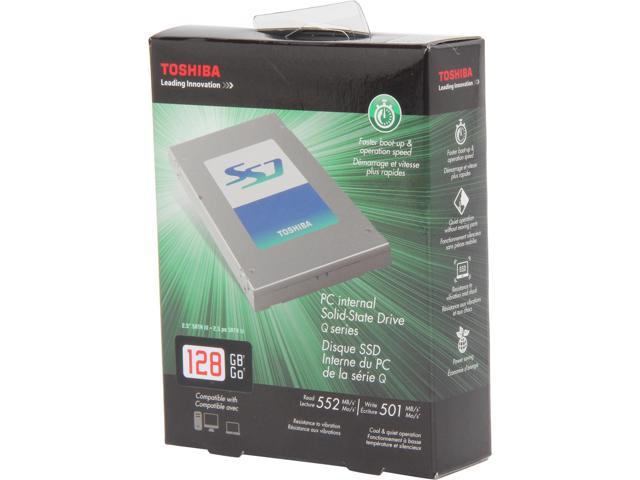 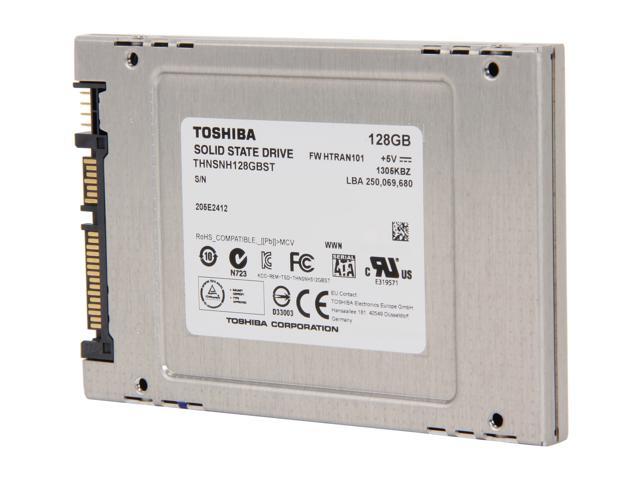 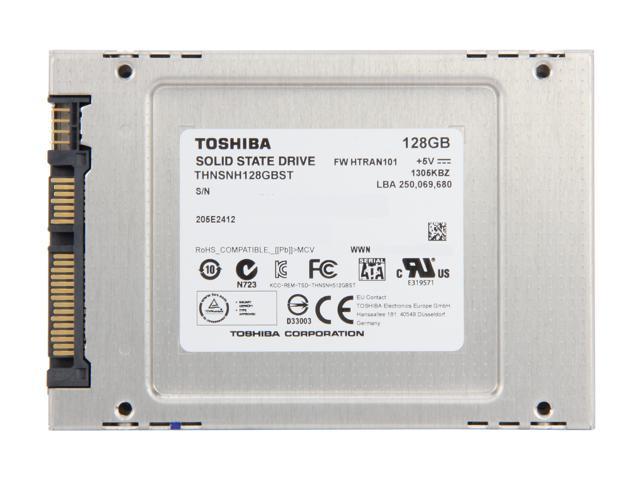 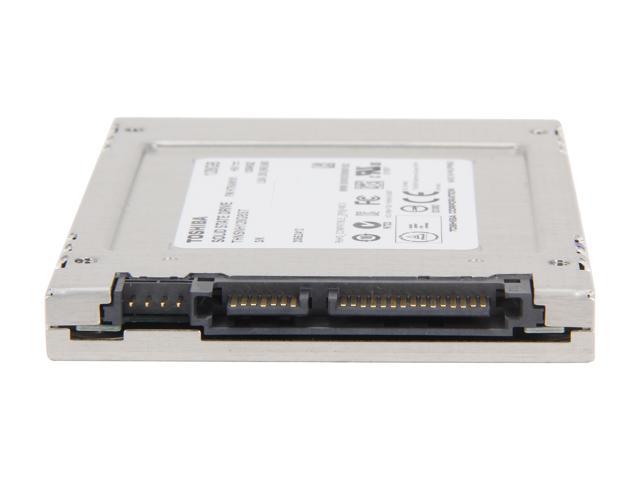 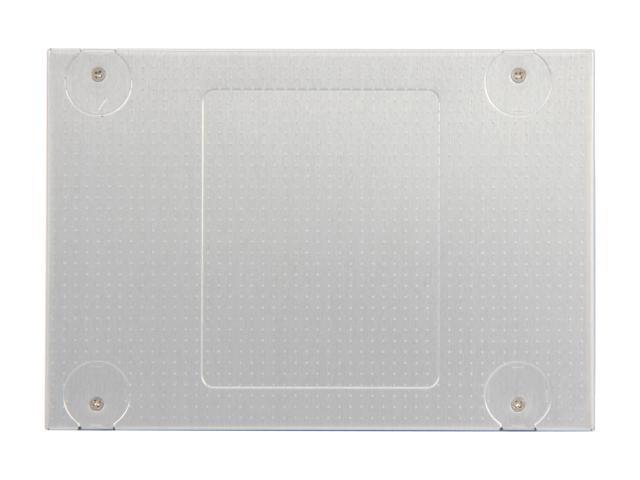 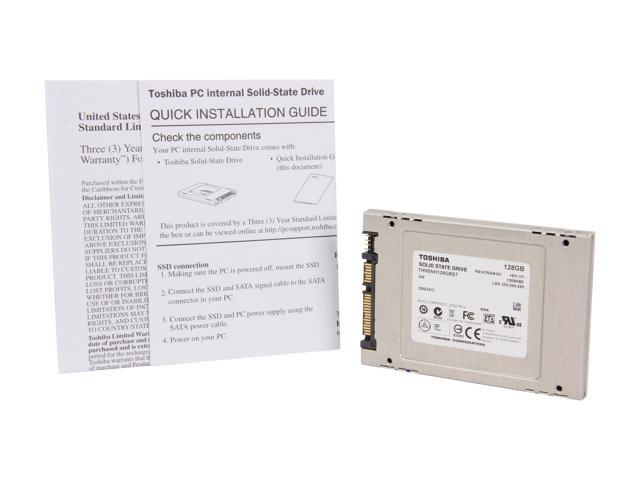 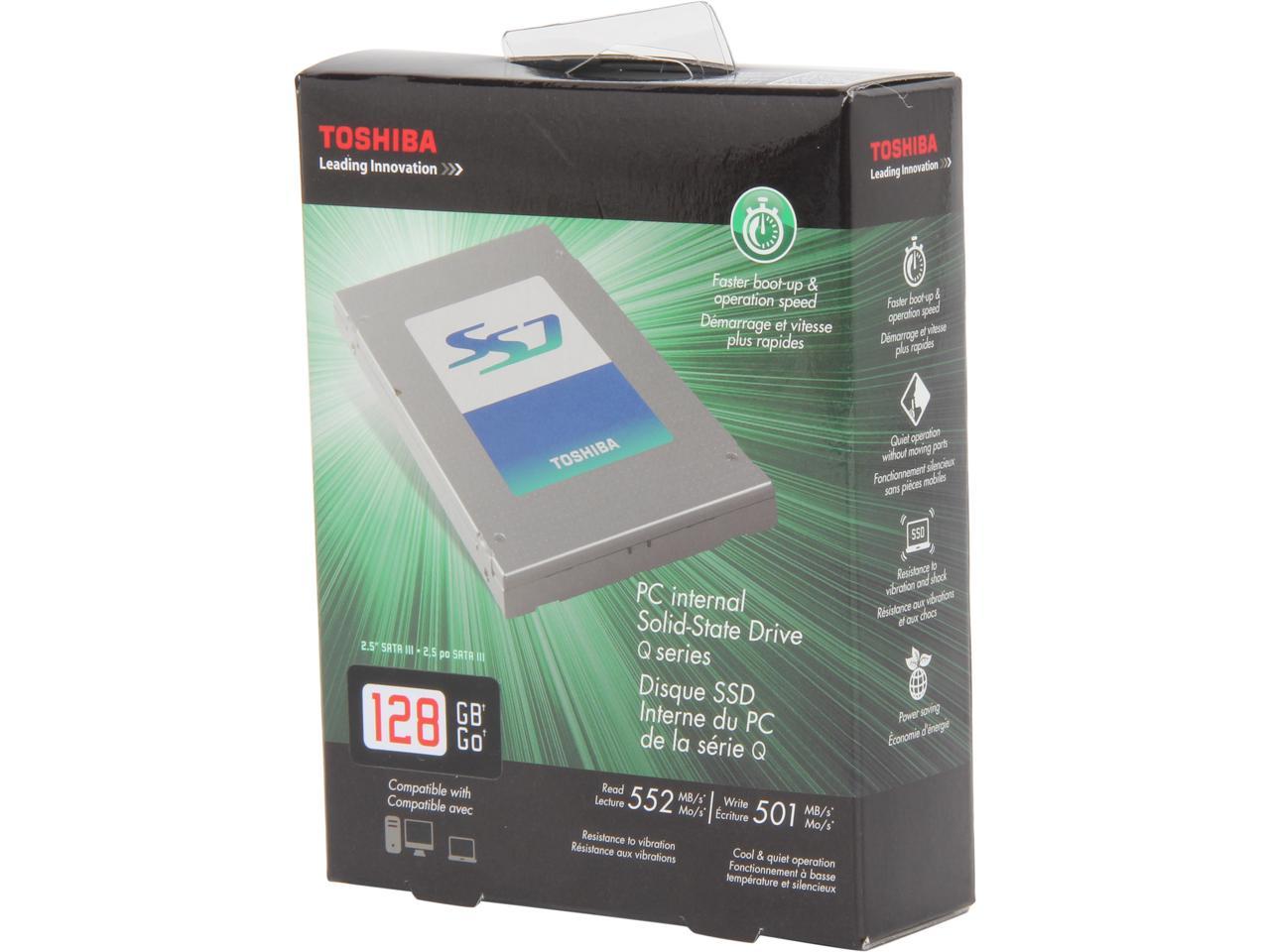 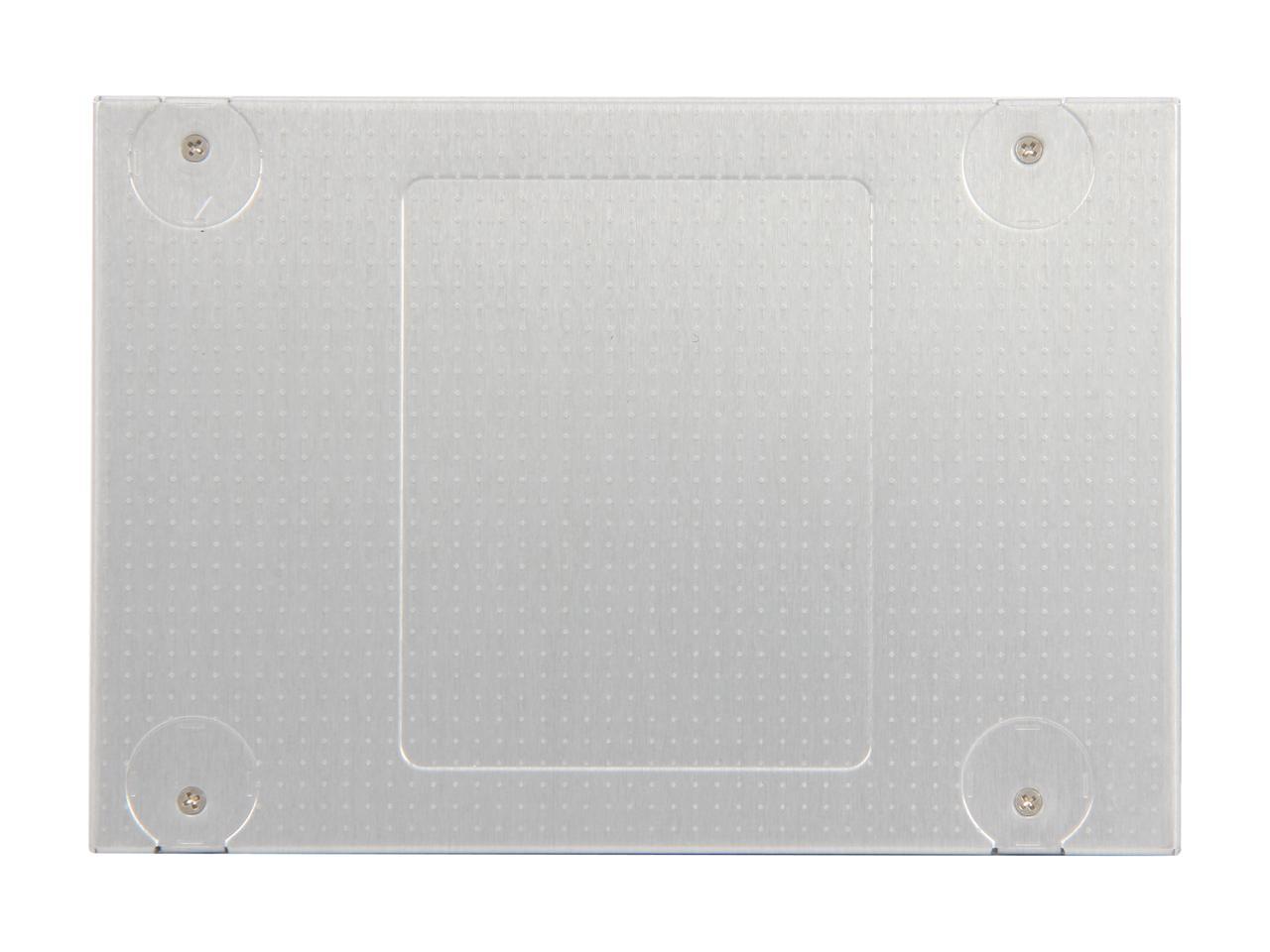 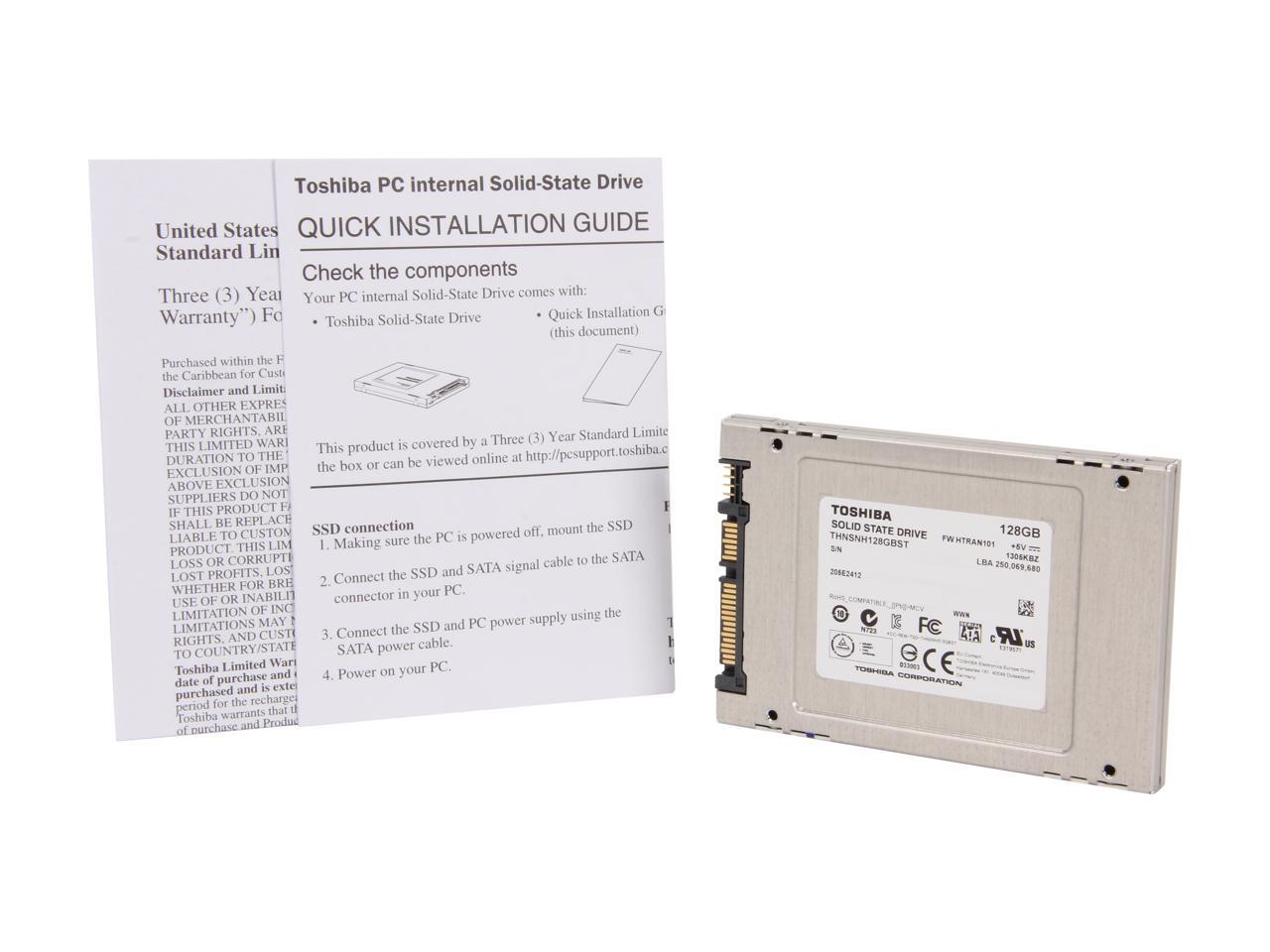 Learn more about the Toshiba HDTS212XZSTA

Overall Review: Used this to replace a Samsung 830 60GB SSD as my boot drive on a Windows 8.0 desktop machine. It effectively halved my boot time. Getting great transfer speeds, 150MB/s R and W, even on SATA II. Using Paragon OS migrate to SSD the system copied over in about 4 minutes.

3 out of 3 people found this review helpful. Did you?
karen b.
Ownership: 1 day to 1 week

Pros: Its a SSD and a very fast one. Crystal DiskMark 480mb read and 430mb write yes this is real world numbers

Cons: body is light plastic,feels fragile doesnt come with anything but the ssd drive,not even a sata 3.0 cable

Overall Review: wake up toshiba,you have a very fast product,right up there with all the pro ssd's latest and greatest in the marketplace. now what if i benched and reviewed your drive with a regular sata cable?

1 out of 2 people found this review helpful. Did you?
Anonymous
Ownership: 1 week to 1 month

Pros: When you first open it, the SSD itself is very light. I got 118GB even thought it states 128GB, which is fine. It's very fast just like it advertised. I've been using this SSD mostly for surfing the web and it's super fast starting and closing Windows 7. I've had it on for about 4 days on my laptop and it still runs great. Cheaper than other SSD's but I hope it lasts, we'll find out! I've only been using it for a little over a month now. It hasn't crashed yet or gave me any errors so I'm good.

Cons: Cheap means cheap! It's very light which means plastic components throughout rather than hardy and more sturdy aluminum or other metal parts. Although booting and closing Windows is very fast, the transfer speeds do slow down for no reason. When I was transferring a large 4 GB video file (.raw), the speeds started at around 400 MB/s, then went dramatically dropped as low as 3.5 MB/s. The whole time it was transferring, the ratios went up and down and it was never consistent. I just don't know why.

Overall Review: I was a little hesitant to purchase this SSD especially that it was a Toshiba but I gave it a gamble since it was by far one of the cheapest ones and Toshiba does have a name in the electronic industry (although I can't say if its a good name or a bad name). The point was that I've heard of them before...so I went ahead a dove in. It's currently installed on an older Dell laptop..I think M6500 series, Dual Core 1.2GhZ, 2GB Ram and it's used mostly just for surfing the web. Again, so far it's done well. It turns on and boots into Windows 7 fairly quickly and shuts down just as fast. The only issue is the questionable data rate transfers of large files. My opinion: if you are out to get a cheaper SSD (in price i mean..not quality), you should get this SSD. If you're looking for a higher quality in production SSD where you'll be using it for more than web browsing then I'd suggest you get a better quality one because data transfers (in my experience) could be quite slow for SSD's.

0 out of 2 people found this review helpful. Did you?
Anonymous
Ownership: 1 month to 1 year

Cons: *Really light weight and flimsy feeling. I feel like I could throw it 200 yards! lol *No ID on the packaging...very generic looking. No stickers in the packaging to put on it either. Kinda odd.

Overall Review: Figured I'd give it a chance. Purchased for my friends build recently. (Refer to my A4-4000 apu review) This thing boots her Windows 7 PC in under 25 seconds. Benchmark speeds are very respectable also. Crystal Disk Mark - Read: 351.9 MB/s Write: 336.2 MB/s AS SSD Benchmark - Read: 326.09 MB/s Write: 314.40 MB/s Not bad at all for a sub 100 dollar SSD. Performs twice as good as the Kingston @ the same price (while on sale for 79 dollars). Why it has gone up to $112 is beyond me. I purchased this and the Kingston @ 79 free shipping. See if you can wait it out before jumping on this one. @ 100 or below its a no brainer, but over 100 like it is now you'd be better off buying the Samsung which would run rings around this thing for the same money. Overall, my friend is happy, performance is excellent and Toshiba quality means rock solid reliability. I think I made a good choice.

Cons: Bought this drive due to claimed performance of "up to" 552/501MBs. After installing the drive and running some benchmark tests, I was achieved a range from 251Mbps to 399Mbps, averaging 301Mbps. Yes, this is still rock star performance compared to a standard HDD, but it pales in comparison to my Samsung 840 series SSDs...also keep in mind it's bare bones: no SATA cable, no mounting screws, no apps, nothing but the drive.

Overall Review: I bought the extended warranty, "JUST IN CASE"... When I tried to register the SSD at the Toshiba website, you cant. You cannot check for a valid warranty status, serial number, model number or any way to look for BIOS/FIRMWARE or driver update information. They act as if the device does not exist. Newegg should look into this issue. Some reviews around the internet speculated that these are European models dumped on the U.S. market. I have contacted both Toshiba and Newegg and have not received any response to my concern. This could be an issue down the road. This is a bare bones unit, no trays, cables or hardware.

Pros: Super fast. I do a complete reboot in 8 seconds. Any programs installed to this SSD run without lag.

Cons: It's so small. Just the OS and two games put me at half of the drive's capacity.

Overall Review: A lot of people gave me trouble for not going with Samsung. This was on a great sale that got the SSD + a 3TB disk drive for <$200. I haven't used a Samsung but I can't see how it would be much better. This drive exceeds expectations.

Pros: It worked without a problem right out of box. No bios changes required in this instance. It is faster than my other SDD. Regardless of the actual speed I get it's WAAAAAAAAAAAAAAAAY faster than the spindle disk.

Cons: It's ugly, looks like an aluminum box with something missing. But once inside who cares? I'm taking an egg away because I'm getting about 80% of my SATA 2 capabilities, but that could be the controller's fault and not the drive itself. Expect nothing but the drive inside the box.