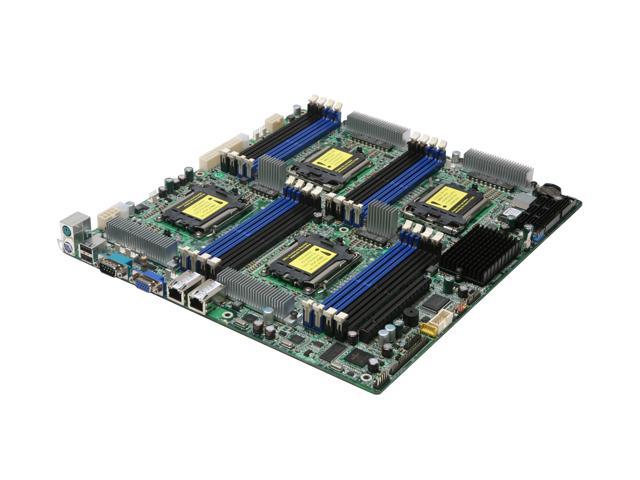 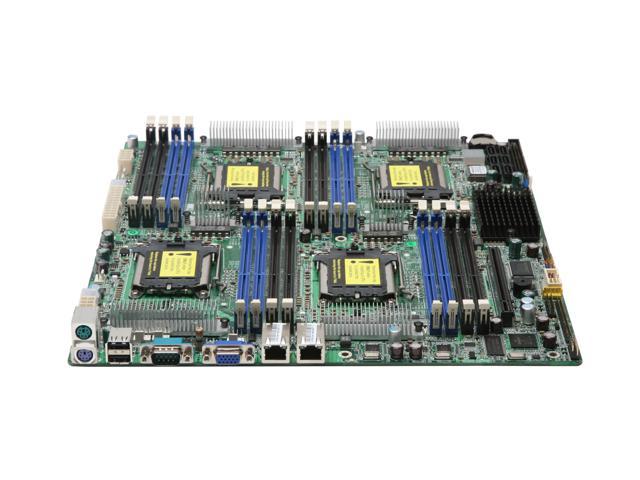 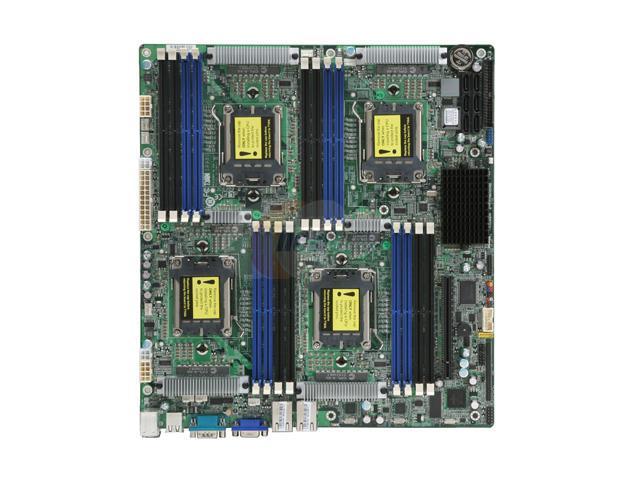 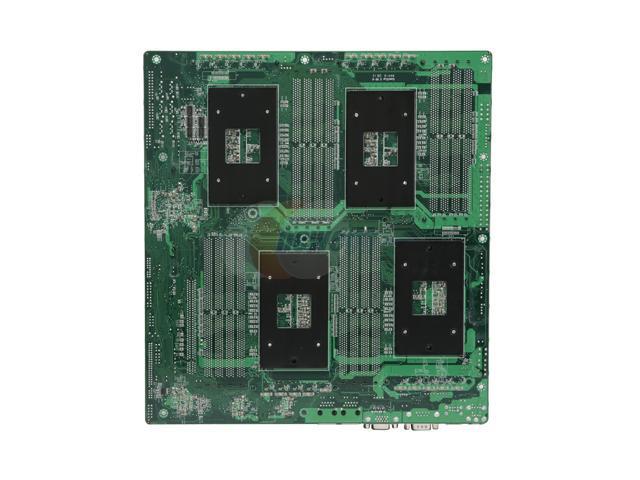 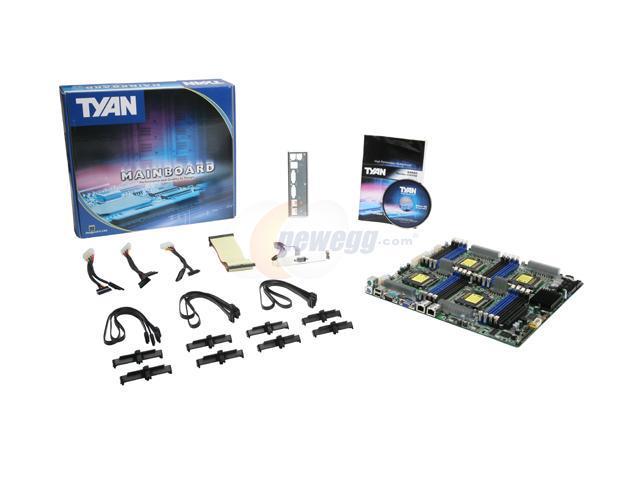 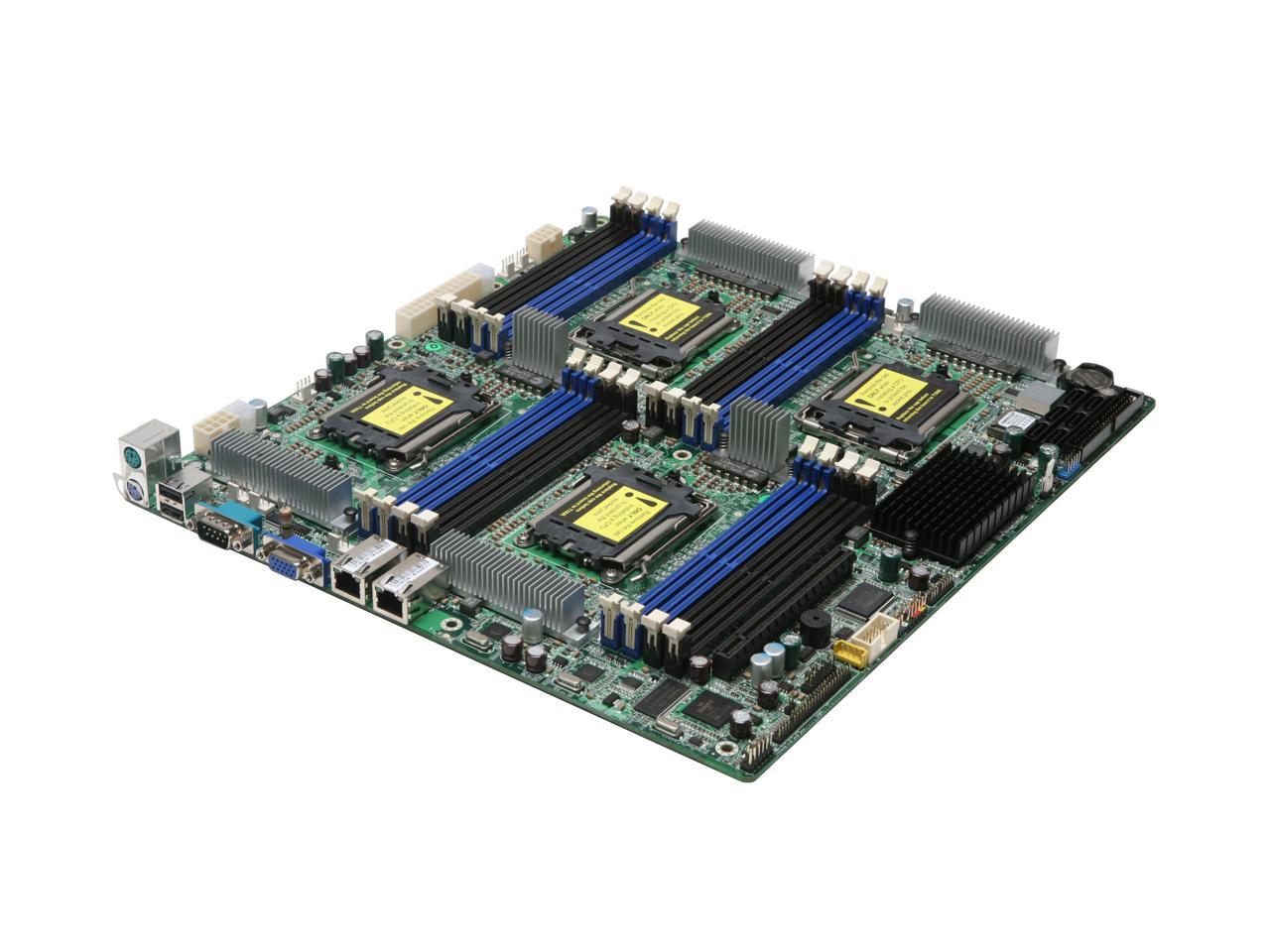 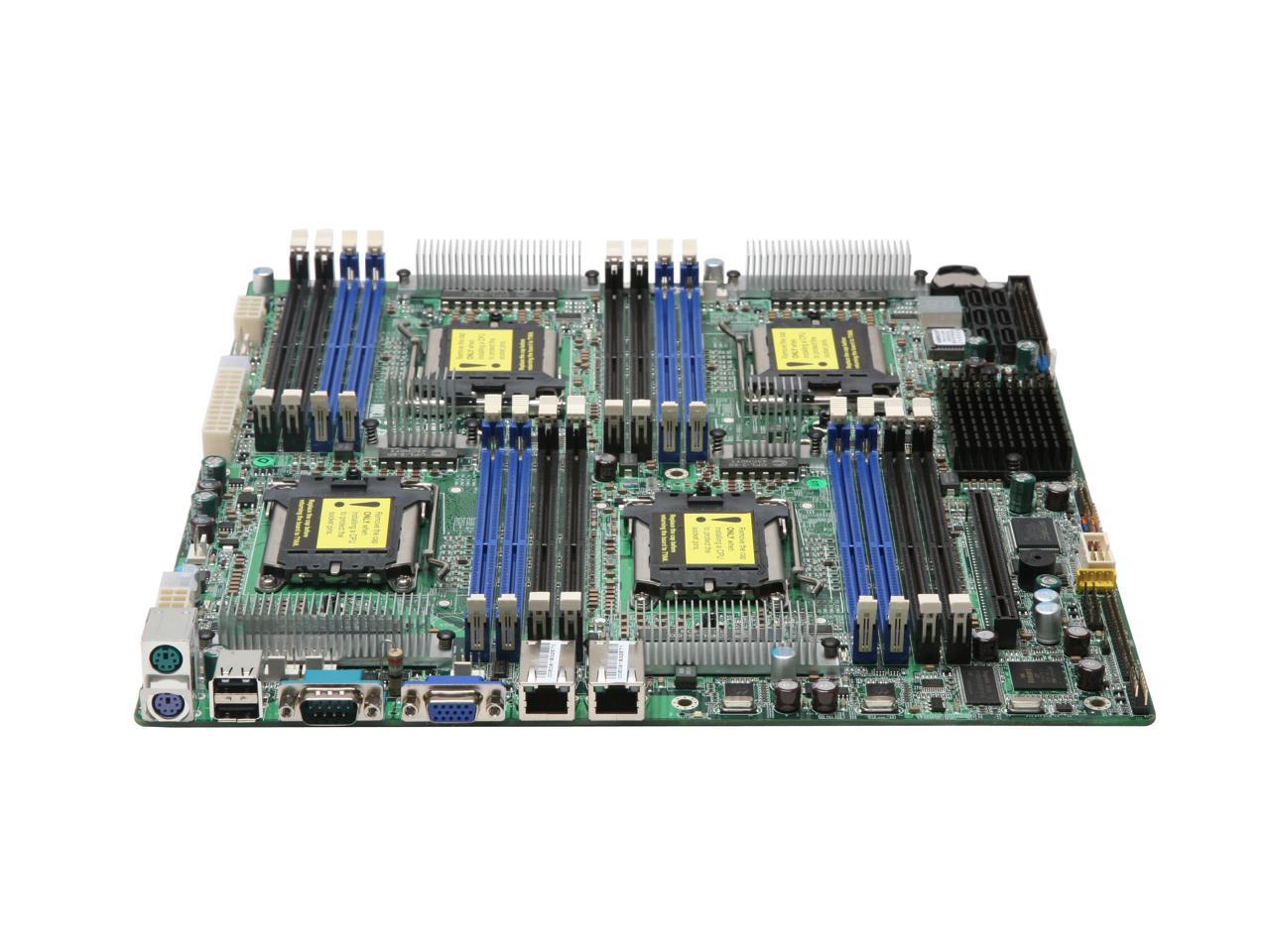 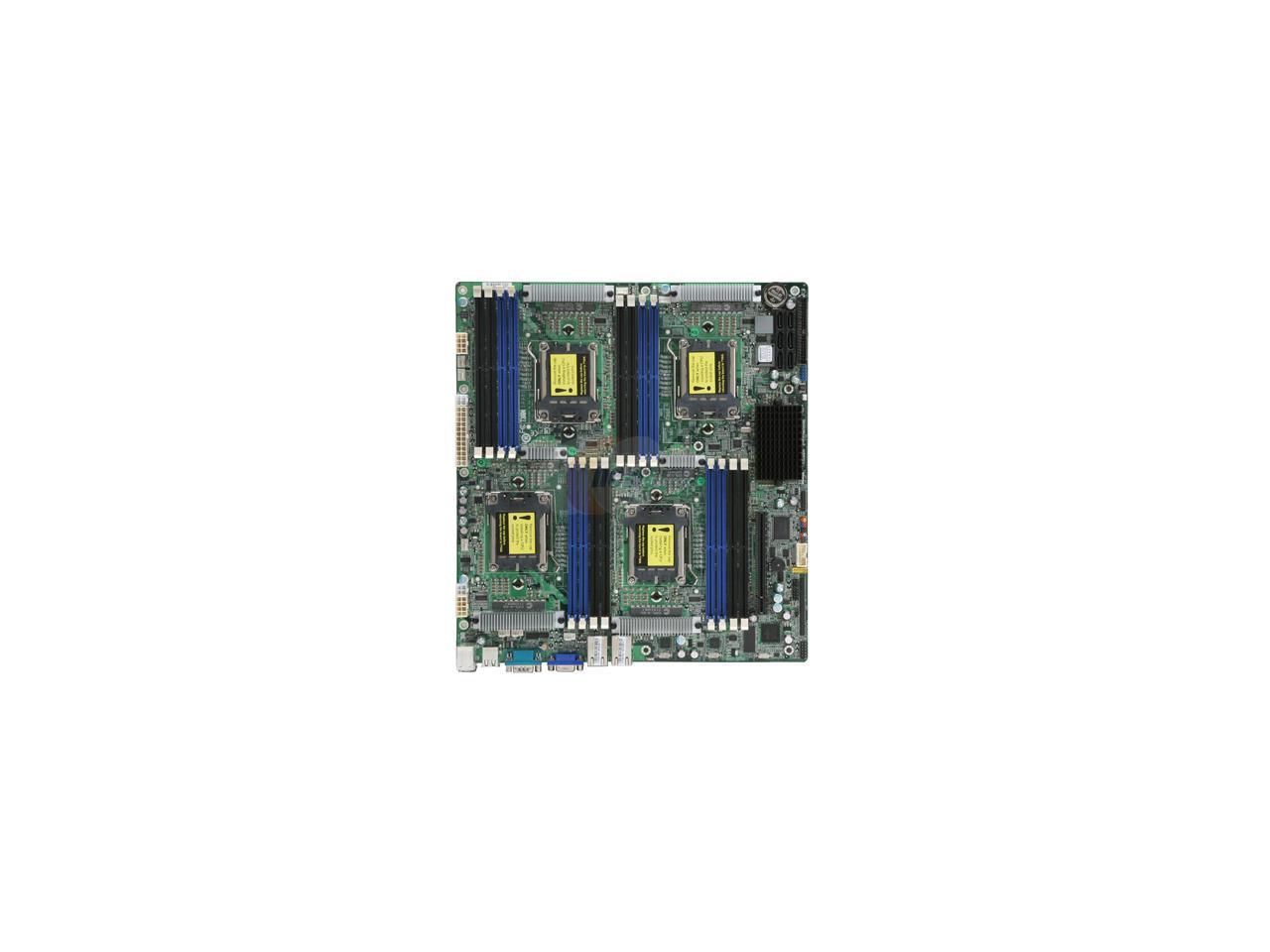 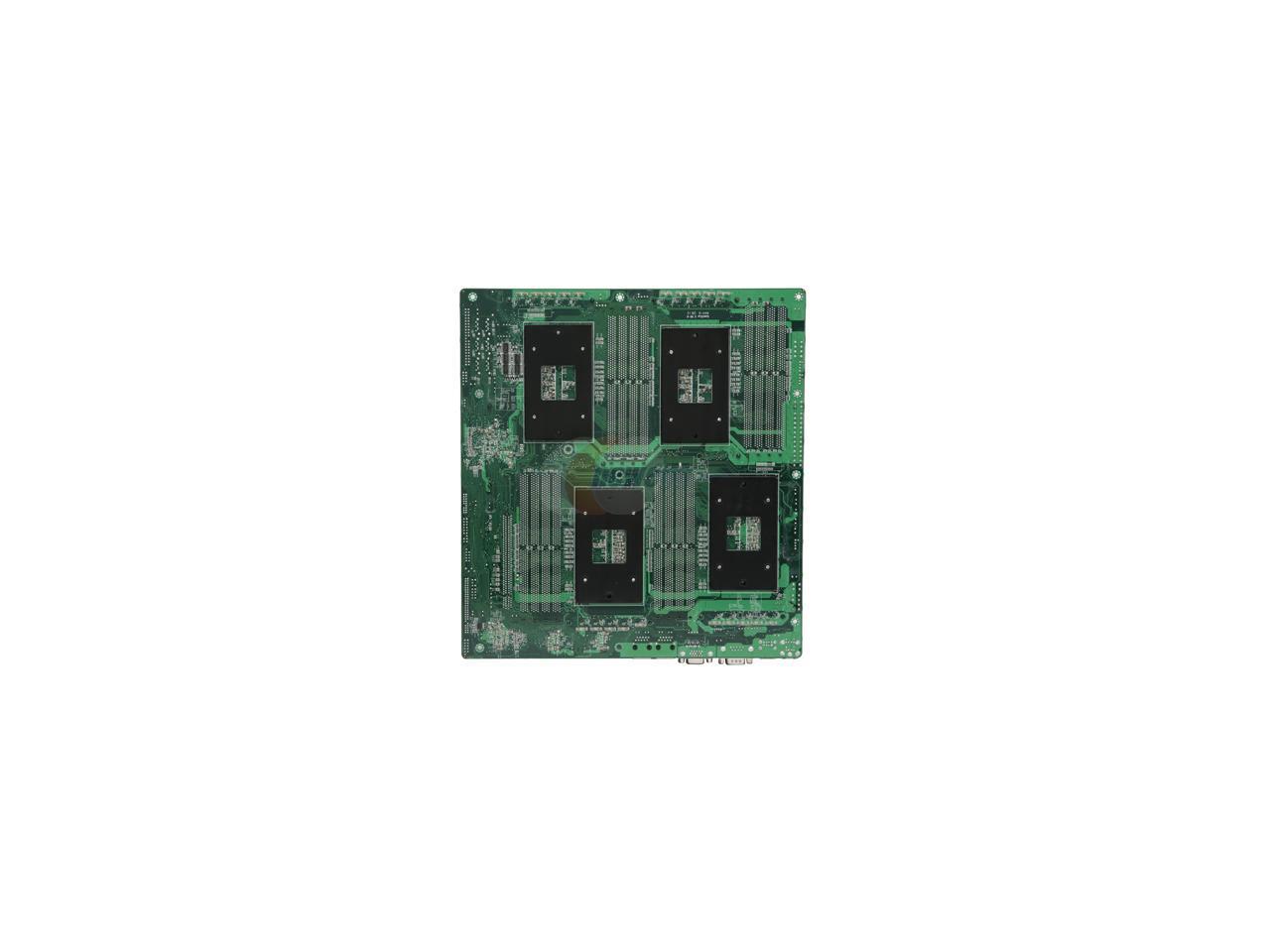 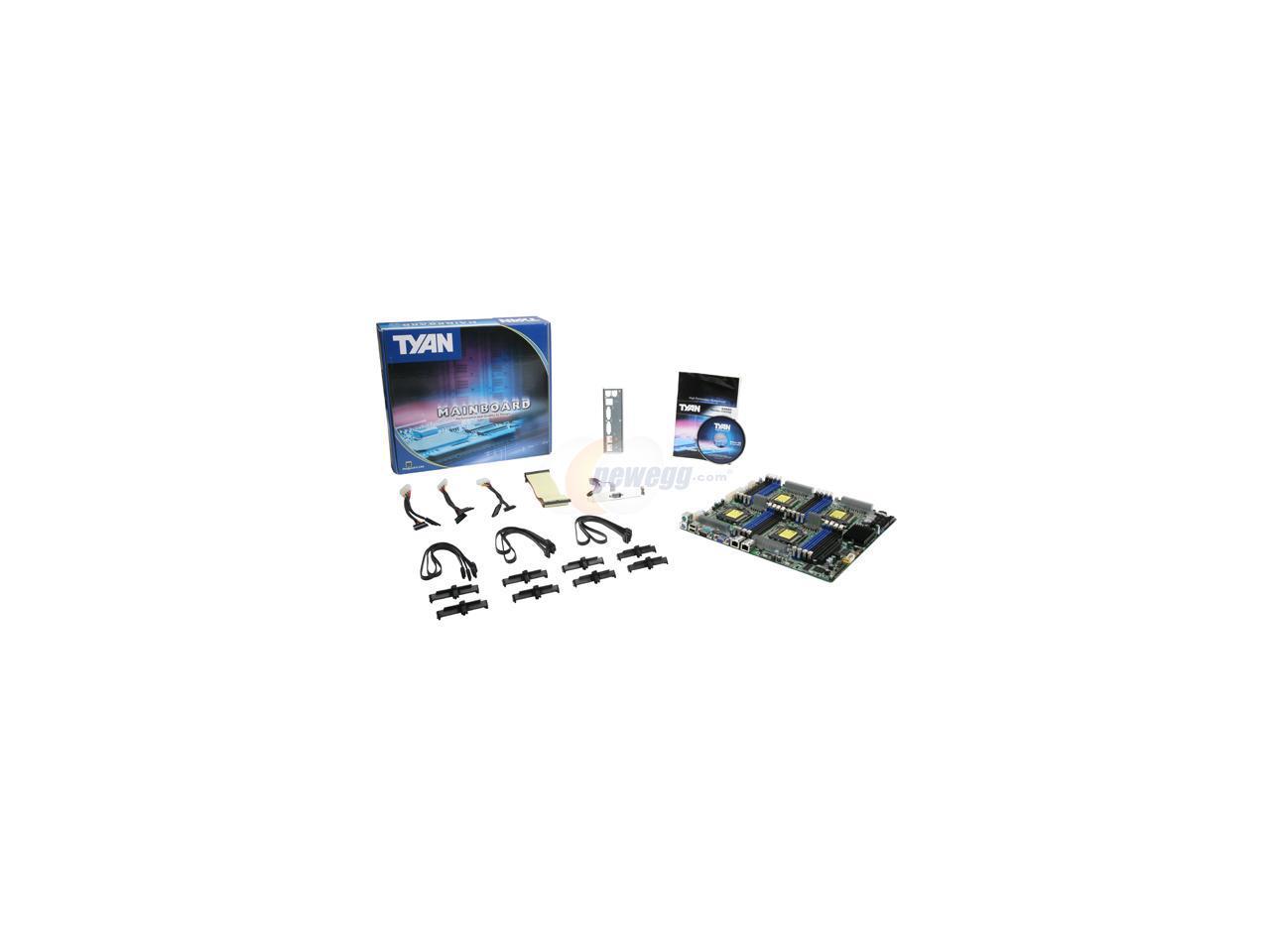 Learn more about the TYAN S4980G2NR

Pros: Very stable, rock solid board. I updated to the latest bios to fix a couple documented glitches. Runs a windows based VMWare server like a champ. With 4 quad core processors average processor load rarely ever jumps above 10% on the 11 VM's currently living on that box. I plan on adding many more VMs down the road. If I had money to burn, I'd have gotten another one of these and built it into a gaming rig with a dual GPU video board and a high-end usb audio device (it has no onboard audio).

Cons: I thought I was going nuts over the first two weeks of ownership. First batch of bsods pointed to raid problems, the next batch seemd to point to acpi problems, then bios, then totally random crashes.. By that point I figured I had bad memory or insuff power. It turns out it was just the ram slots. It was hell troubleshooting that and finally getting it running stable. I had to re-seat every chip and push them all in to the point where I was afraid I'd break something with all the force I was using. The RAID driver image utility that you boot into doesn't create a proper driver floppy for windows. It's missing files. I found a slightly newer version of the driver on the CD and just copied those files to a floppy and everything worked when installing windows. Raid controller doesn't support arrays larger then 2tb. It may be a driver issue though as the bios shows 2tb+ but Windows only shows the remainder even with the latest drivers

Overall Review: Stick with the drivers it comes with! Things got less stable for me when I updated, plus the latest RAID drivers don't support larger then 2tb raid arrays anyway. I used this board as a base for a VMWare server I was building. I had 4x1.5tb drives I was going to setup for RAID 5, but due to the issues I mentioned above, I ended up just putting them in a seperate box and making an openfiler SAN with software RAID. (I avoid windows software raid like the plague.) The base OS for the server was win2k3 x64 (not ESXi - I have my reasons). Now that it's running stable, I'm very pleased and keeping it, but had I known beforehand about the RAID driver issues, I probably wouldn't have bothered making my purchase. If you buy this, it'll be rock solid with just 3 things in mind: - Seat the RAM firmly - Mind the RAID limit - Avoid upgrading the drivers

Cons: I can't find any 8000 series quad core opterons anywhere. I've had this board for about 3 months now and am stuck with the dual core opterons, which I expected to have temporarily until the quads came into stock again. Now the quad opterons have vanished from newegg completely and I fear they won't be released at all.

Overall Review: Does anyone know if this board is compatabile with the Athlon socket F's? Also, the power supply was not a problem at all, I'm not sure what the previous posters were complaining about. I've got this system housed in a cooler master stacker case with the stock power supply and a couple pin adapters as outlined below and it's been working great.

Pros: Able to buy parts on-line super cheap as all of the tech is 10 years old but still can run simulations and other heavy lifts. Box came with converters for screw in AMD heat sink.

Cons: Had issues with posting BIOS. It was self inflicted as in the final analysis I had an extra spacer that was touching the mother board. First step in troubleshooting is alignment of spacers with mounting screws. My eATX case had a few spacers in the wrong place for this motherboard. Motherboard was delivered with original BIOS. Not new eggs fault as the board arrived in what looked like original packaging. Had to dig on Tyan's website to find BIOS download. Used rufus and FreeDOS with a usb stick to upgrade BIOS. I also purchased a cheap AMD CPU 8212 to get the BIOS up so I can upgrade to the Quad Core CPUs that were purchases but only work with the BIOS upgrade.

Overall Review: Very happy once the set-up was done. I bought this 10 years ago when Tyan first release the motherboard and it is still running. Was very happy to see someone with inventory and bought a few more. All in, the server is up and running for less the $500. 64 gigs of RAM and 16 cores. Able to run my trading platform and simulations with continued stability. Running Ubuntu - needed to add SIS video driver manually to get the video running. Was not a big deal. https://ubuntuforums.org/showthread.php?t=2060174

Pros: 16 slots and support 64 G memory. DDR2 4G module is relatively cheap now. 8G module is unreasonable expensive. I believe this probably this is the most cost efficient way to get a lot of RAM. I need a lot of RAM for my work.

Cons: Only one PCI-E slot. If you want to add 4 processors, you need 8000 series processors.

Overall Review: I have read all previous reviews before I decided to buy this item. It actually can be powered by either Tyan power supply or any power supply with 24pin and 2 P4. Most of the power supplies only have one p4, but you can get a molex to P4 adopt at very cheap price. Be careful, some FB-DIMM RAM does not work with this mother board. You'd better check Tyan website for compatible SDRAM.

Cons: NO POWER SUPPLY AVAILABLE! Look around - you won't find one. Tyan makes the ONLY available power supply for this board and they sell it ONLY in a barebones (with 1U case, motherboard and power supply for an exorbitant amount of money). We looked high and low!

Overall Review: It's unfortunate that we couldn't get this going. We tried numerous power supply options, even calling Thermaltake, Antex, Enermax, etc. They all struck out. the killer was the two 8-pins and two 4-pin plugs. Different options had one but not both. Tyan was helpful, but in the end couldn't come through. They said they would work on fixing that issue.

Cons: you have to buy adapters

Overall Review: To complete this sweetness Newegg has the rest of the goods to fill out his board. Just browse...

Pros: This board is what I used for a liquid-cooling project.

Cons: Sadly, upon checking Tyan's site, I found that this has been discontinued. Buyer beware!

Overall Review: The time to have gotten one of these was when the price was only $329. Not anymore.