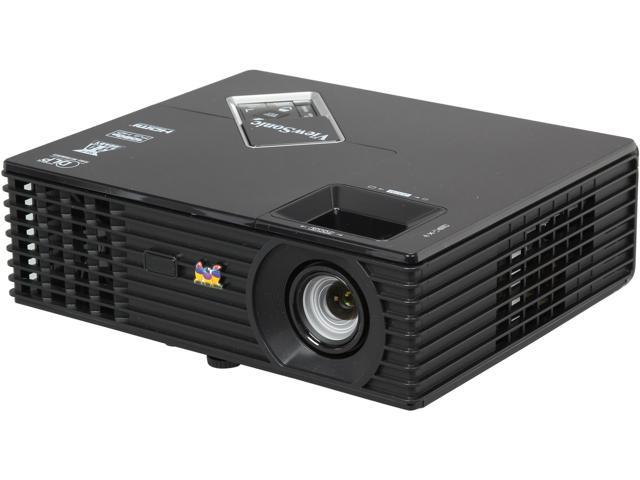 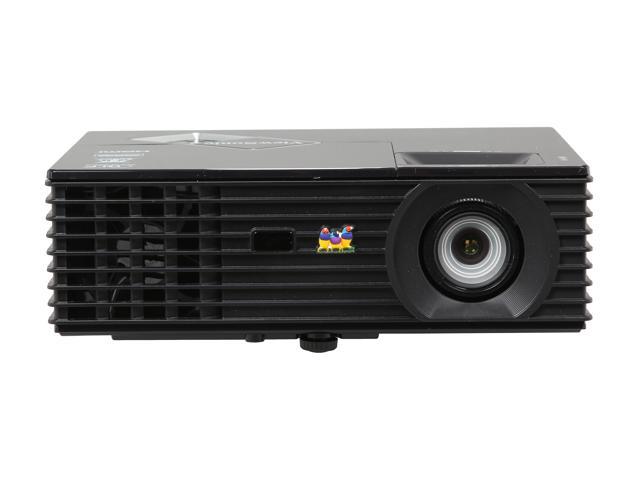 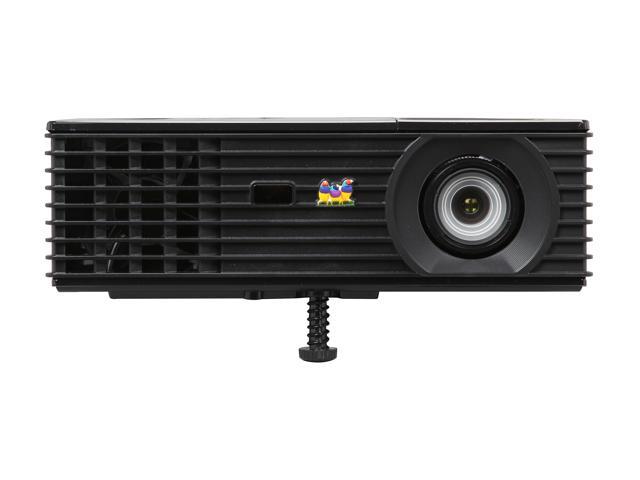 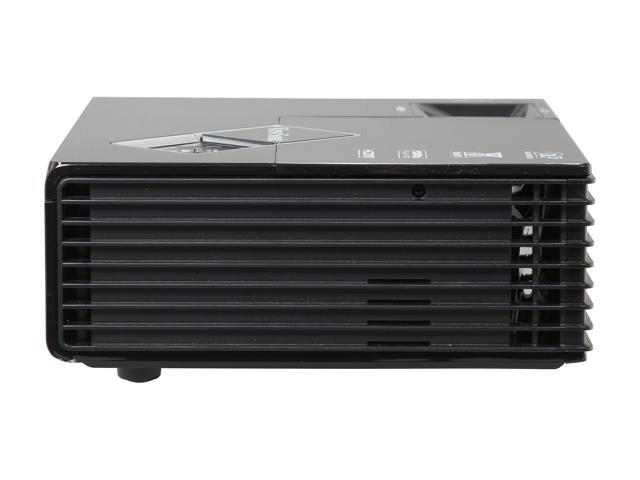 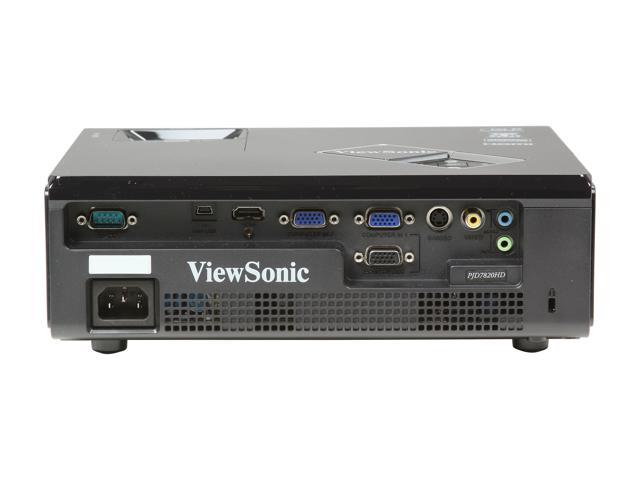 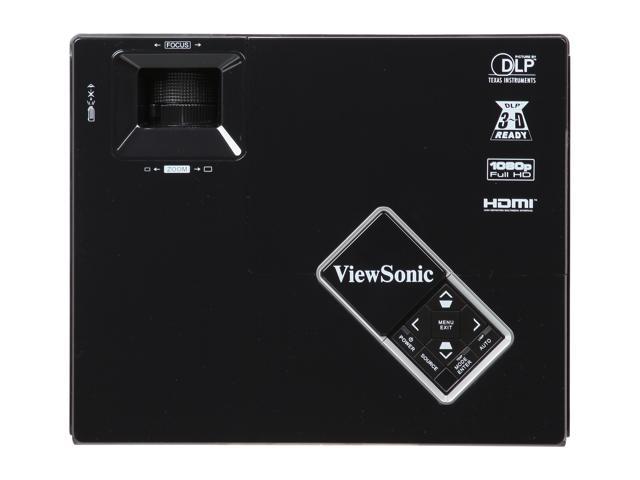 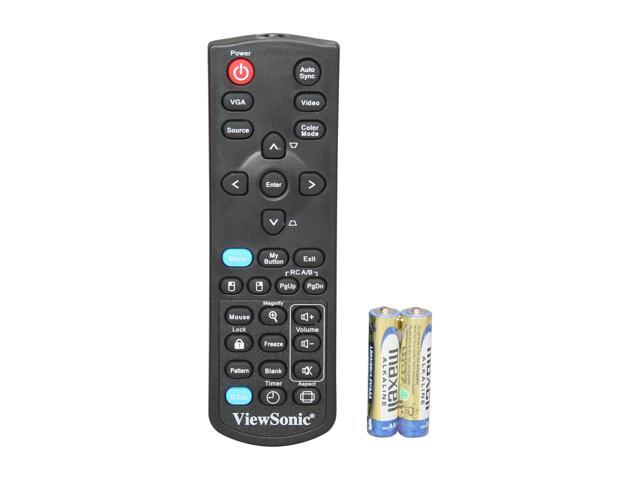 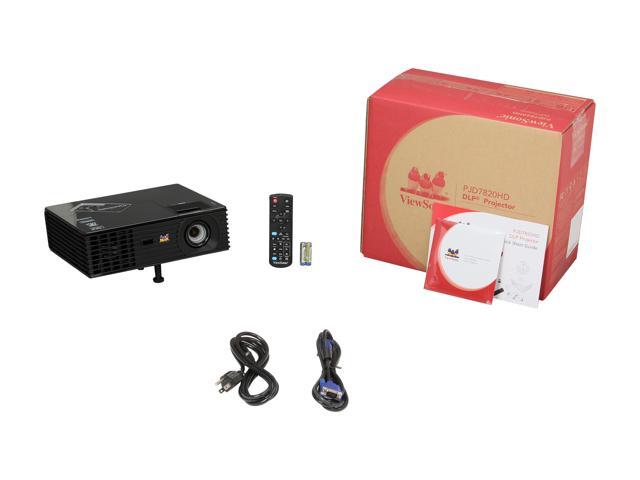 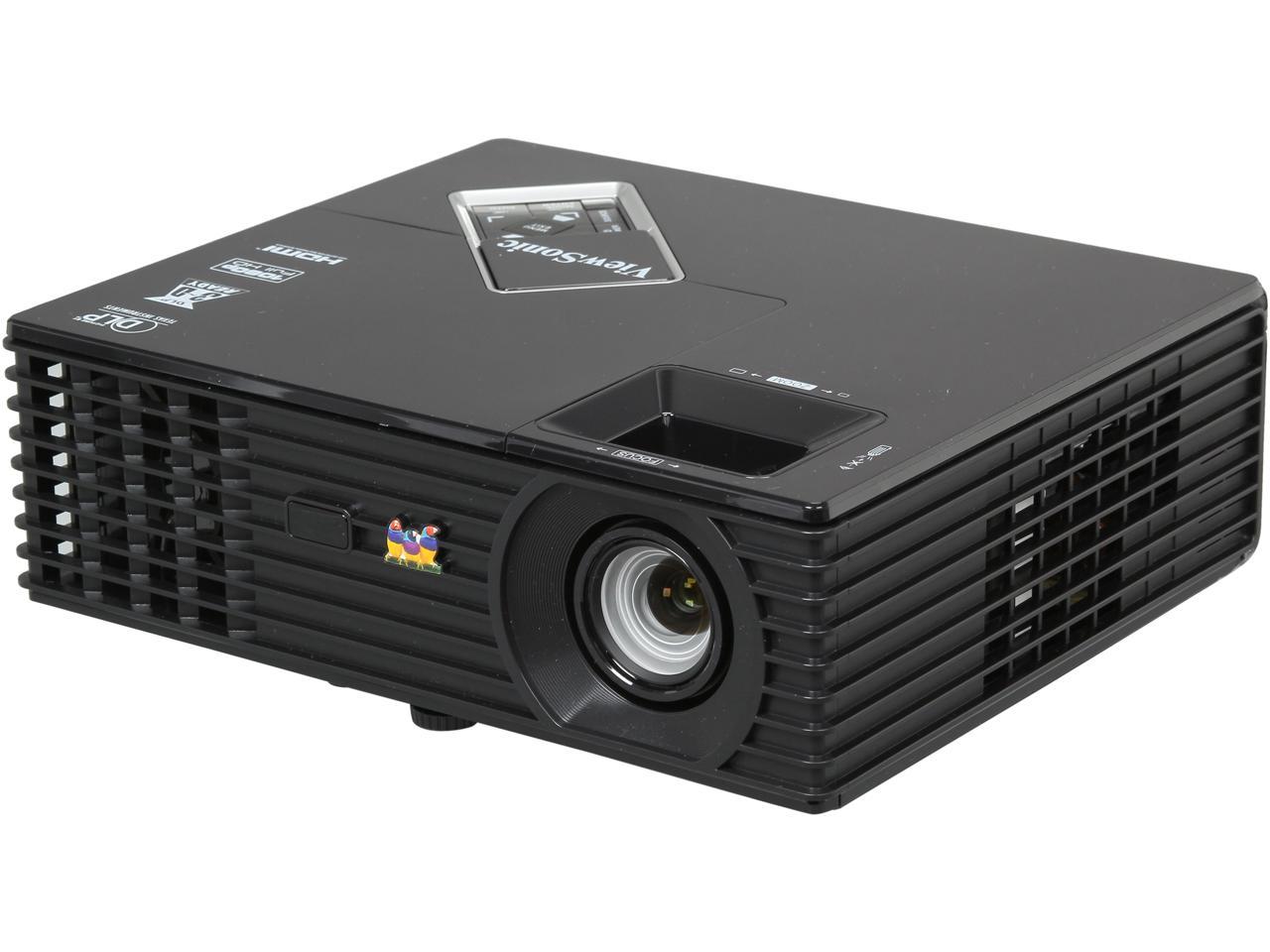 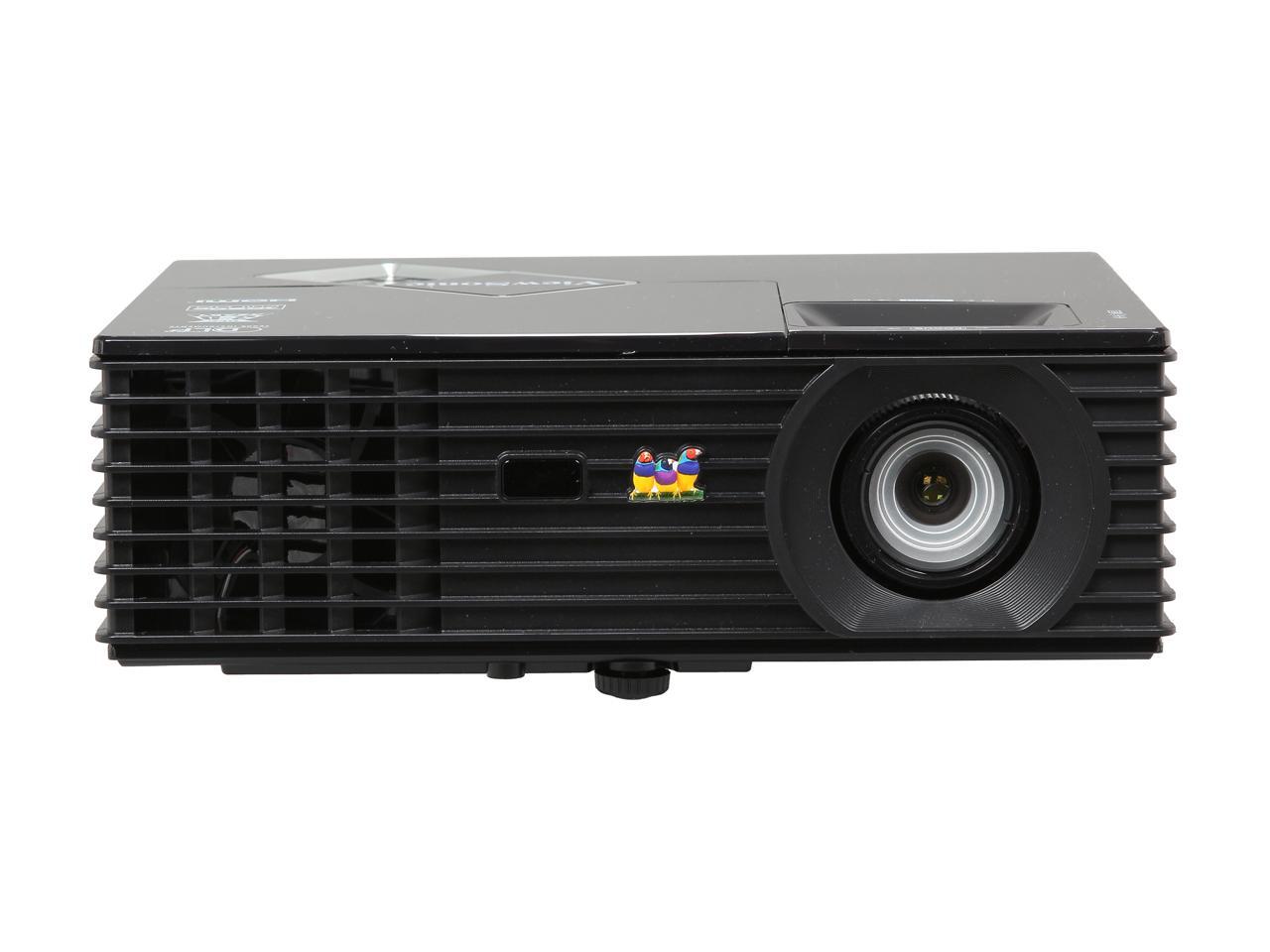 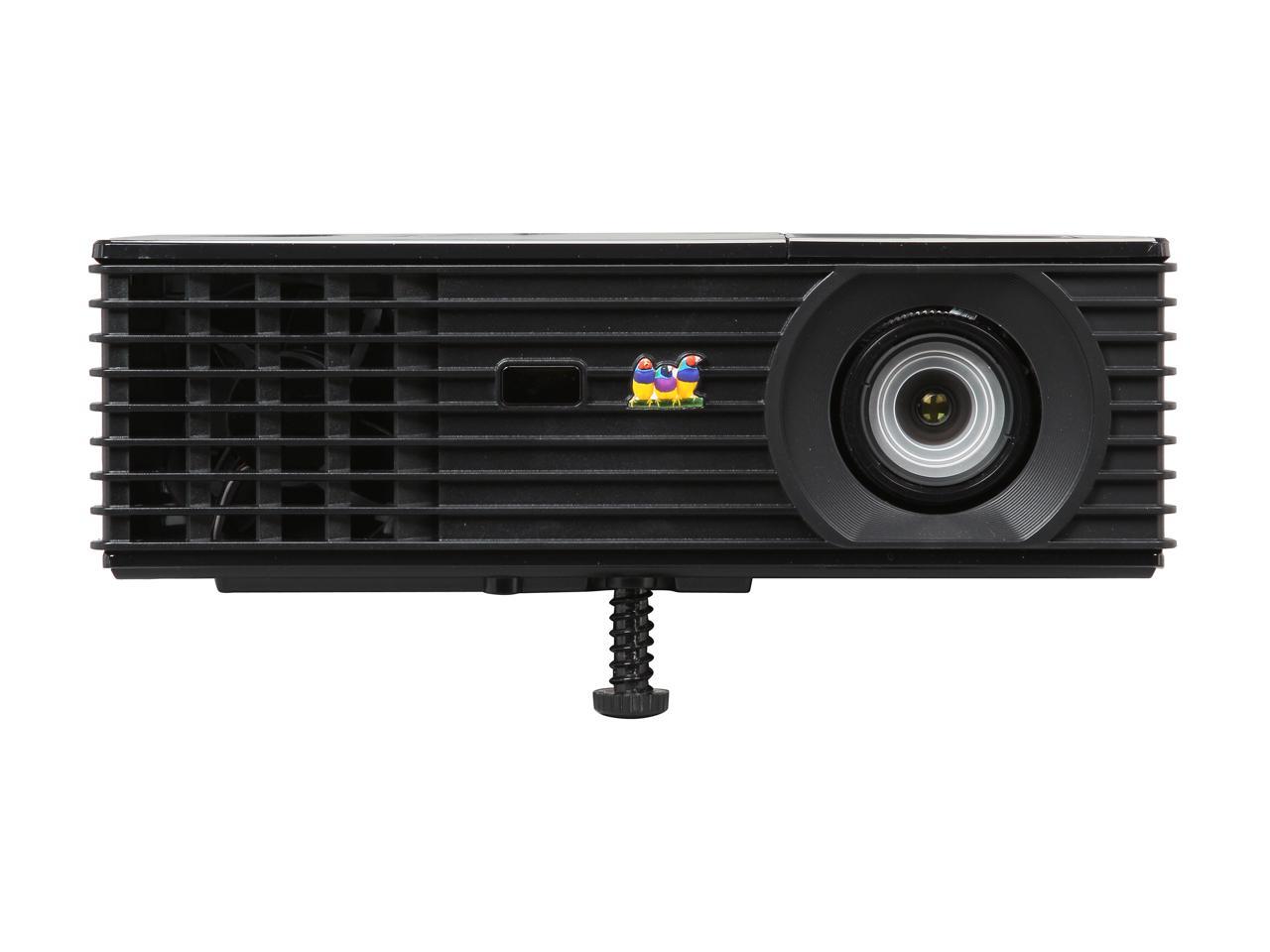 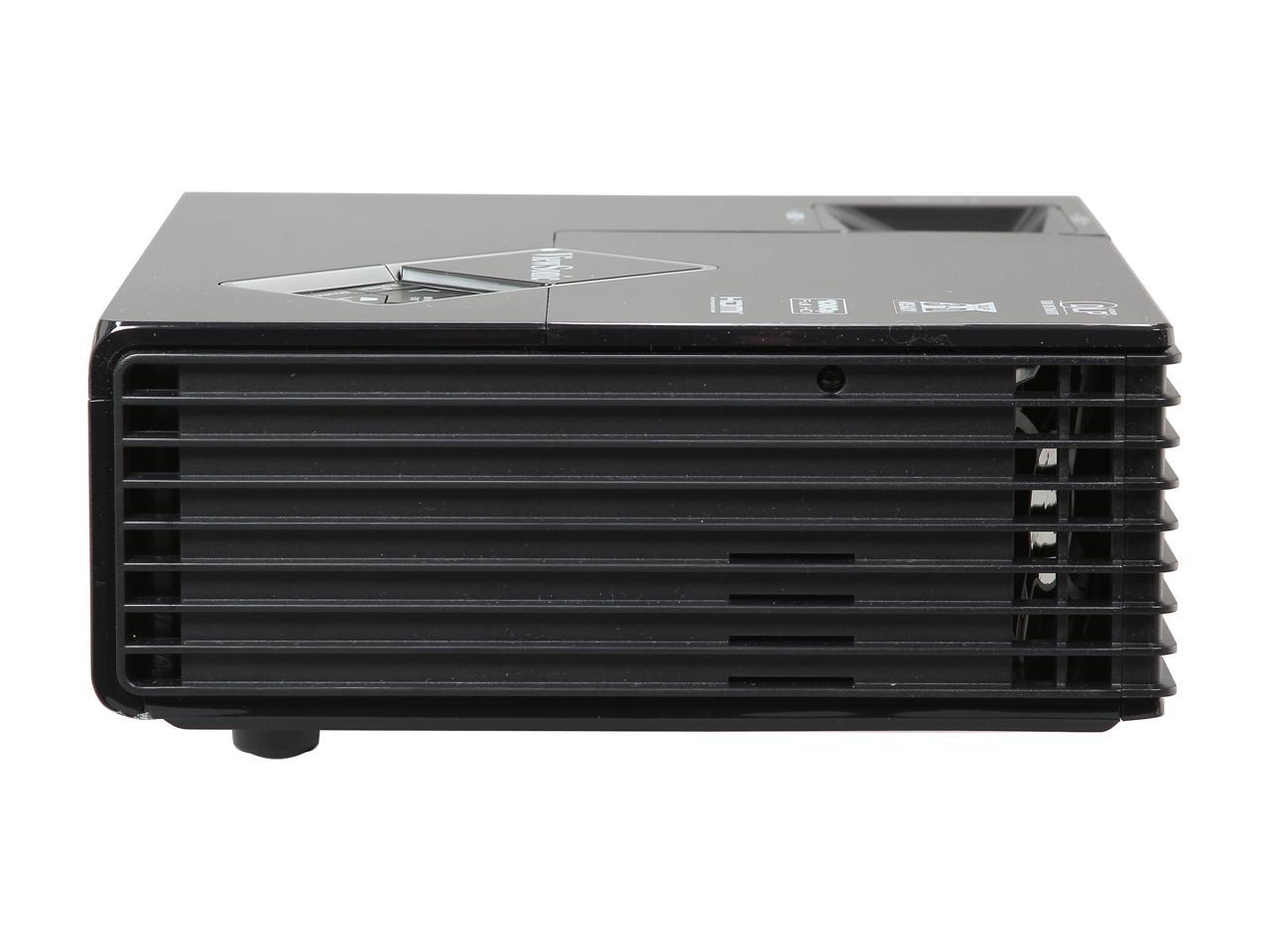 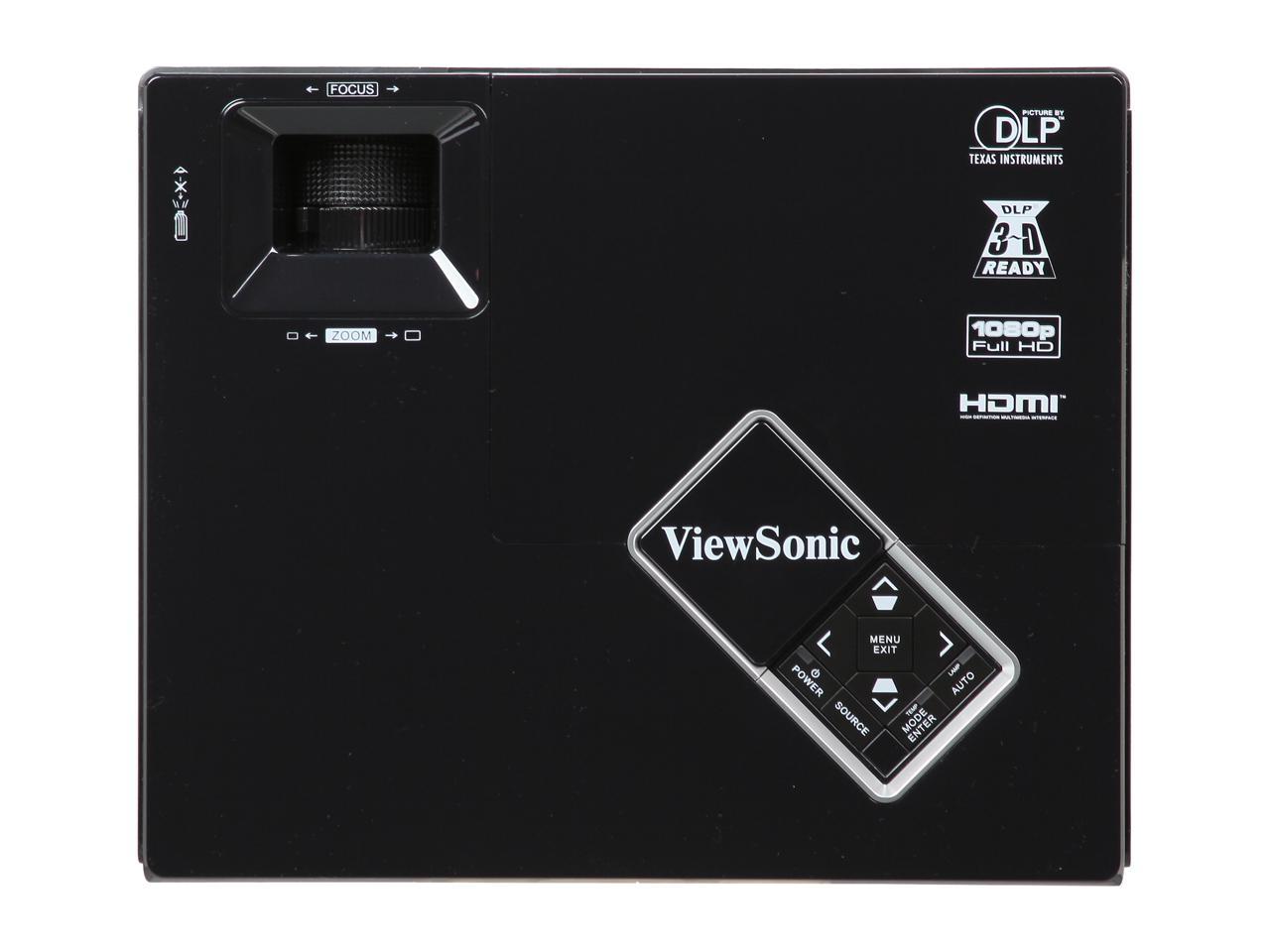 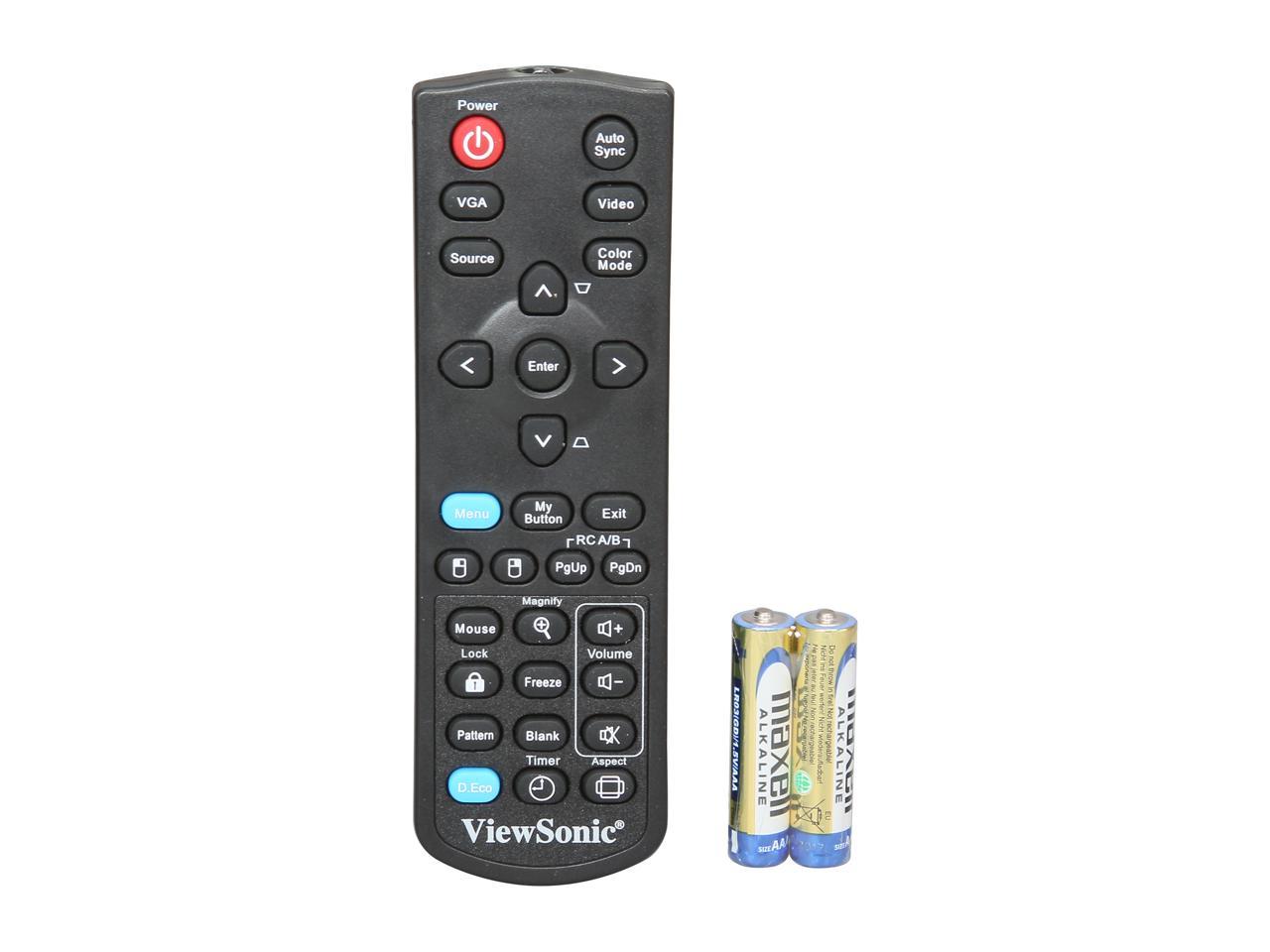 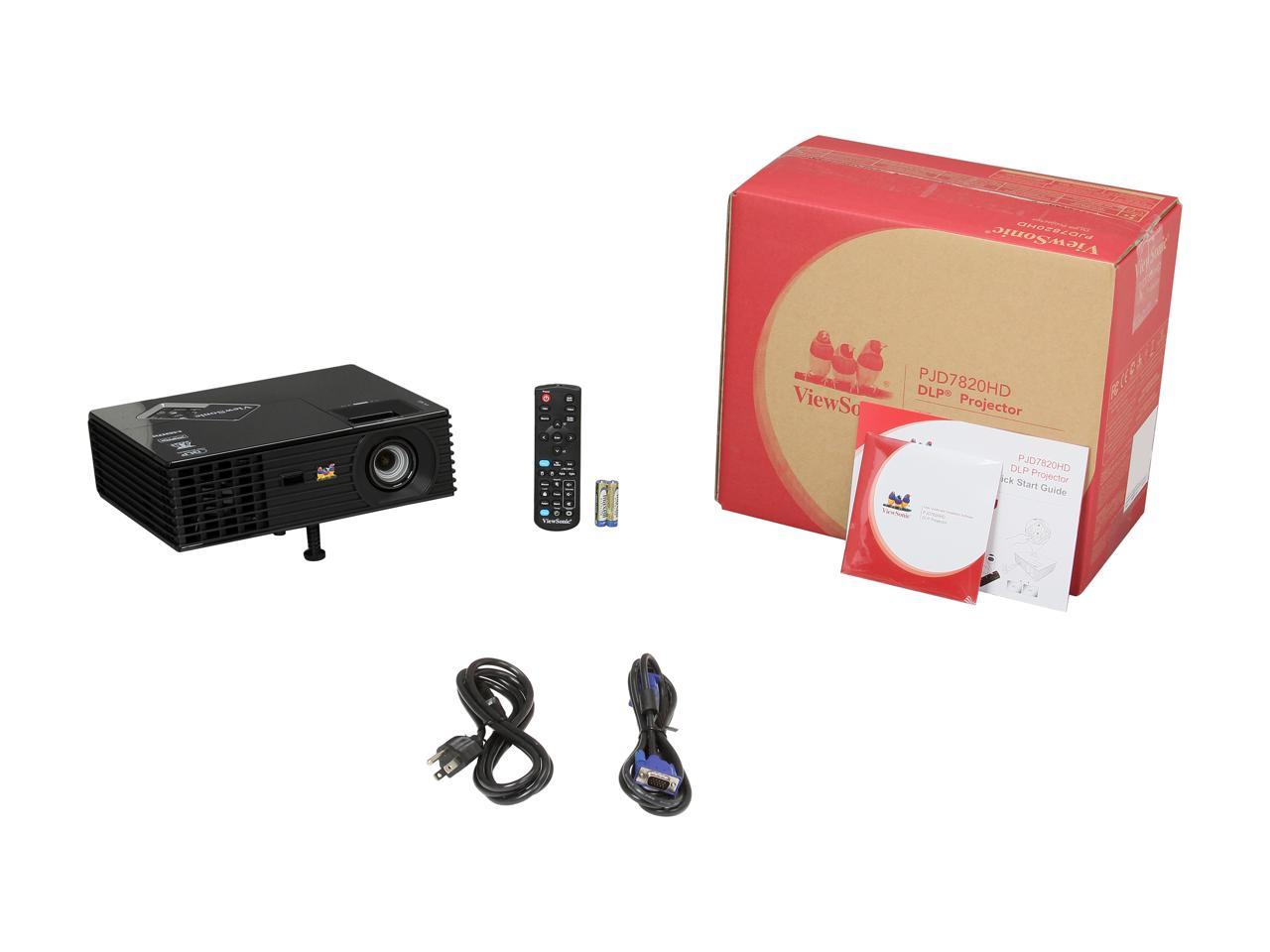 (26) Write a Review
OUT OF STOCK.
Overview
Specs
Reviews

Learn more about the ViewSonic PJD7820HD

Pros: So after owning the projector for a couple of months I've learned more about it. Here are some corrections made to my prior review: First off, I discovered that it's possible to get 1080p 3D @60Hz.... kind of. Turns out that I wasn't using the proper settings in my 3D driver. I found an option in it for Top-Bottom 3D rendering, which halves the vertical resolution while keeping the horizontal the same. So you get 1920x540 per-eye. This isn't as bad as it sounds, since the human eye isn't as sensitive to vertical resolution loss so long as horizontal resolution is high. Doing some tests in various games, I've noticed that objects still become hard to discern at the same distance as 1920x1080 2D, and the only time that I can tell the difference between this and true 1080p is with horizontal objects 1 pixel tall, which rarely show up in games anyway. So while not perfect, it's a WAY better option than muddy 720p. Therefore, disregard everything I said about 3D and having to play with the resolution settings, set your 3D driver & projector to Top-Bottom, games to 1920x1080, and forget about it. On the issue of DynamicEco, the manual states that it's only purpose is to save lamp life when away from the projector for short amounts of time. This function is there simply because turning off the projector then back on before it has a chance to fully cooldown over the course of an hour shortens the lamp's life. I was confusing DynamicEco with a separate Economic function in the settings. Lastly, I take back what I said about the contrast. You can in fact discern every level of black down to zero if you turn BrilliantColor OFF. Doing this results in more accurate colors as well as opening up more advanced color management settings which let you adjust individual Hue, Saturation, and Gain values for all six colors on the wheel. I'd give you my settings for this but I've decided it would be inconsequential since they're eyeballed settings anyway. I will say, though, that a gamma setting of 3 is now preferred to 7, and Dynamic PC is now preferred to Dynamic Movie for more accurate colors eyeballed using test patterns. The only time you would want to turn BrilliantColor On is if you needed extra brightness (which you won't, even during the day, and even with the lamp set to Economic).

Cons: It's hard to find any more co ns not stated in my previous review, but since I have to put something here let me just say that the firmware is a little bit buggy at times. An update will hopefully fix these minor issues assuming ViewSonic issues one.

Overall Review: All in all, I've put over 225 hours of gaming and movie watching into this thing, and I'm still as happy as I was from day one, if not more so. I still say you can't do any better for the price.

Pros: Spectacular brightness, resolution, color, blacks. No rainbow effect, shearing, and otherwise that I've noticed from watching movies, playing games, and surfing web. Picture does not suffer from daylight (first time in 4 years of projector ownership), so I can turn on cartoon's etc. for kids while visitors are over; previously owned an 2400 lumen projector and this one easily outdoes it, even in ECO mode. Don't have to turn off the lights to see dark scenes in games anymore. Lot's of features, auto off, auto ECO, others. Looks great on photo background paper and Projector screen fabric at 163" diagonal.

Cons: Some color adjustment features are not available depending on what input you use (HDMI). However, adjustments are still available and most new tech has supplemental color adj. options. But I didn't even need to adjust it, P$3 and Computer (HDMI & VGA) both at 1920x1080, colors look great.

Overall Review: Short throw was "shorter" than my previous short throw projector. Required a much larger screen to mount in same location. Used first on photography background paper, but just bought projector screen material from C@rl's Pl@ce and built a frame at 144" wide (screen 136" wide, 163" diagonal!) per website instructions, and visitors are shocked that I made it. I thoroughly enjoy the larger screen size, but this may be an issue if someone is limited in space, so do your research, I was aware of this beforehand. Best projector that I have owned, or seen in person(at retail stores). Highly recommended. Will review again after a few months.

Pros: Great picture and super fast response time. I can't tell the difference on this compared to my flat screen TV's with 5ms response. I play high speed competition gaming and I have no cons to having a 100"+ screen while playing. I am using the wall and it's PLENTY bright without a screen of any sort and this wall is by no means even close to white (it's a darker red). Very surprised by the power.

Cons: Of course a little fan noise (not overbearing) 1 HDMI input is a downer of course. If you use Keystone feature you will see a dim light where the picture is supposed to be so plan on making it level with the center of the screen for optimal view. I have mine behind the couch at about center with the view screen and it's great.

Overall Review: The thing is short throw so it makes a large image from a short distance. You will only have about 5 feet of wiggle room to fit this on your screen if you have one with the zoom feature. Plan carefully or you should not be buying a projector in the first place. Great for the money and I have not tried the 3d feature yet so I am not commenting on it. 4 stars for high performance, small price tag, and exactly what I wanted after my expectations were shattered while being addicted to this huge and awesome picture!!!

Pros: I bought two of these with the $50 instant rebate. Which rocked. I have installed them in classrooms and love them. They have good color and a large amount of adjustment which is great when you have a 72" smartboard screen to mate it up to. So far I really like it. The students could see the screen with lights one and blinds open.

Pros: This projector is excellent for the price. I work for Dish and work with alot of home theater systems, this projector is just as good as some of the $2000 projectors I've seen. Way better quaility than any rear projector tv I've seen. I've got mine projector onto a 120" screen and I only need it 12' away.

Overall Review: The only drawback that I have with this projector (though it may be the fact I have it so large) is that while watching movies if I change my focus from one end of the screen to the other you can see a RGB blur out of the corner of your eye. Not too bad though you get used to it.

Cons: location to mount projector to ceiling was a little different then most others, so make sure the mounting bracket you buy will fit that specific model.

Pros: A great machine. Very low energy and it comes with a great warranty. Finally 3D that I can afford. You can find 3D glasses around $20.

Cons: The only thing I don't like is that you cant change brightness settings when it's in 3D mode. You have to set this up before you go to 3D

Pros: Has a good crisp image with good contrast.

Cons: It is a rather short throw, so it wouldn't work for my new home. The fan that is in it is exceptionally loud, would require the sound at rather high volumes to cover it up.