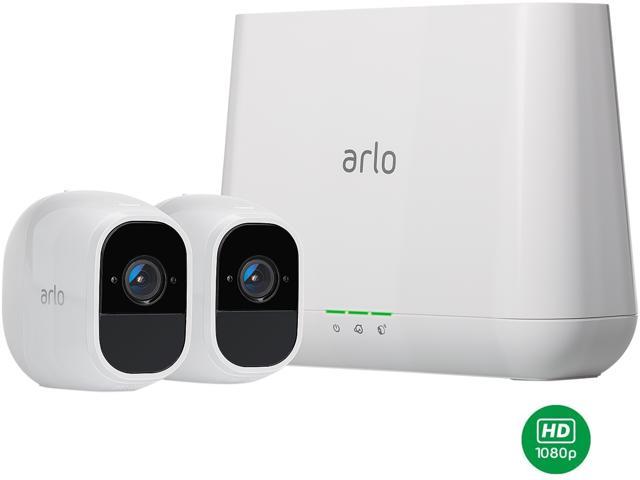 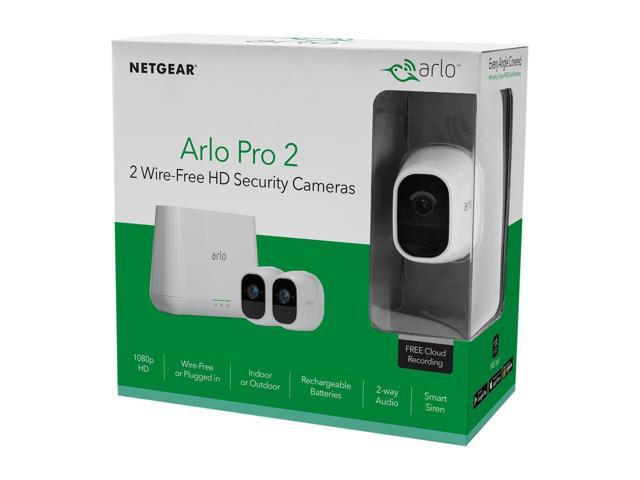 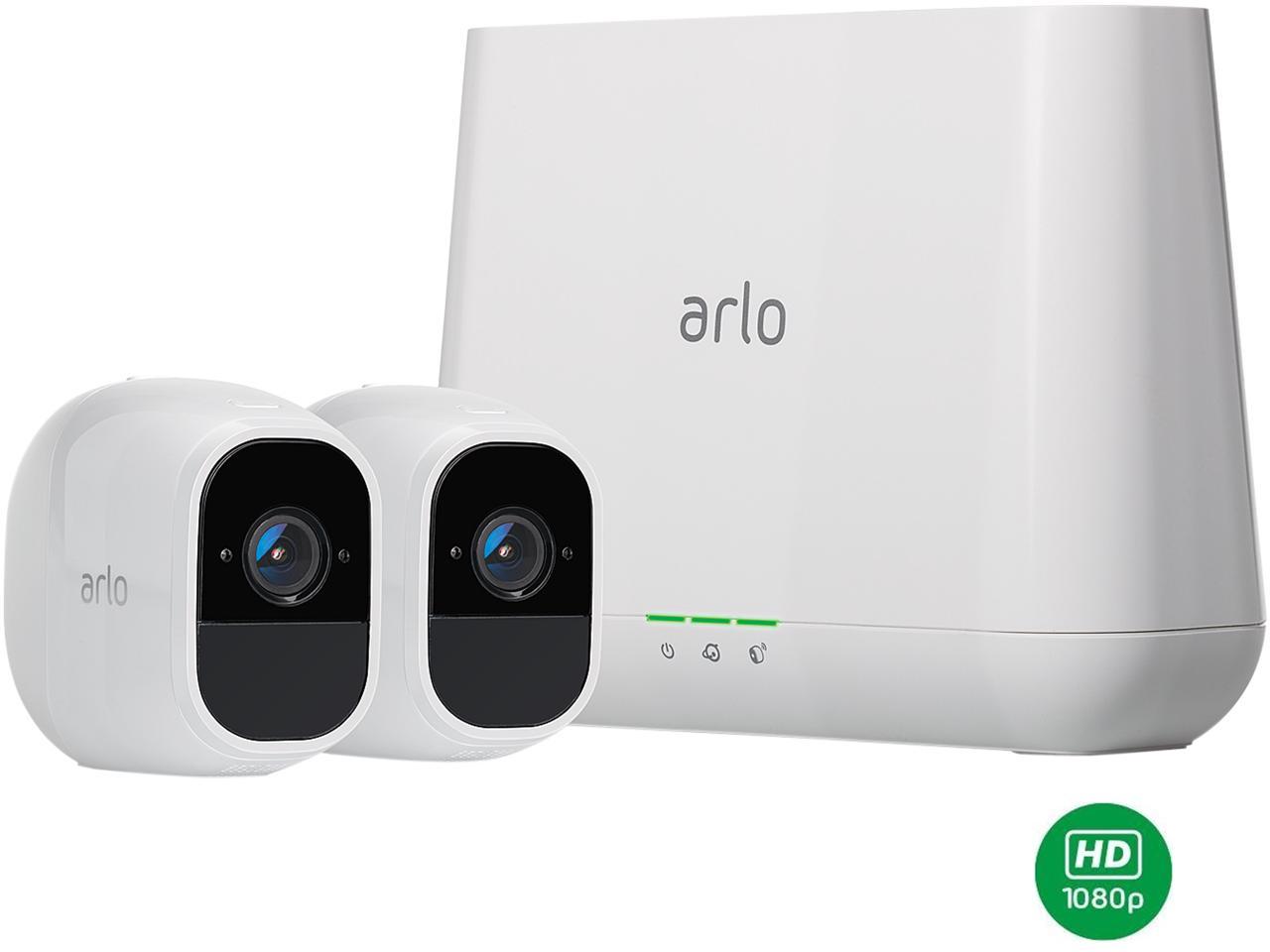 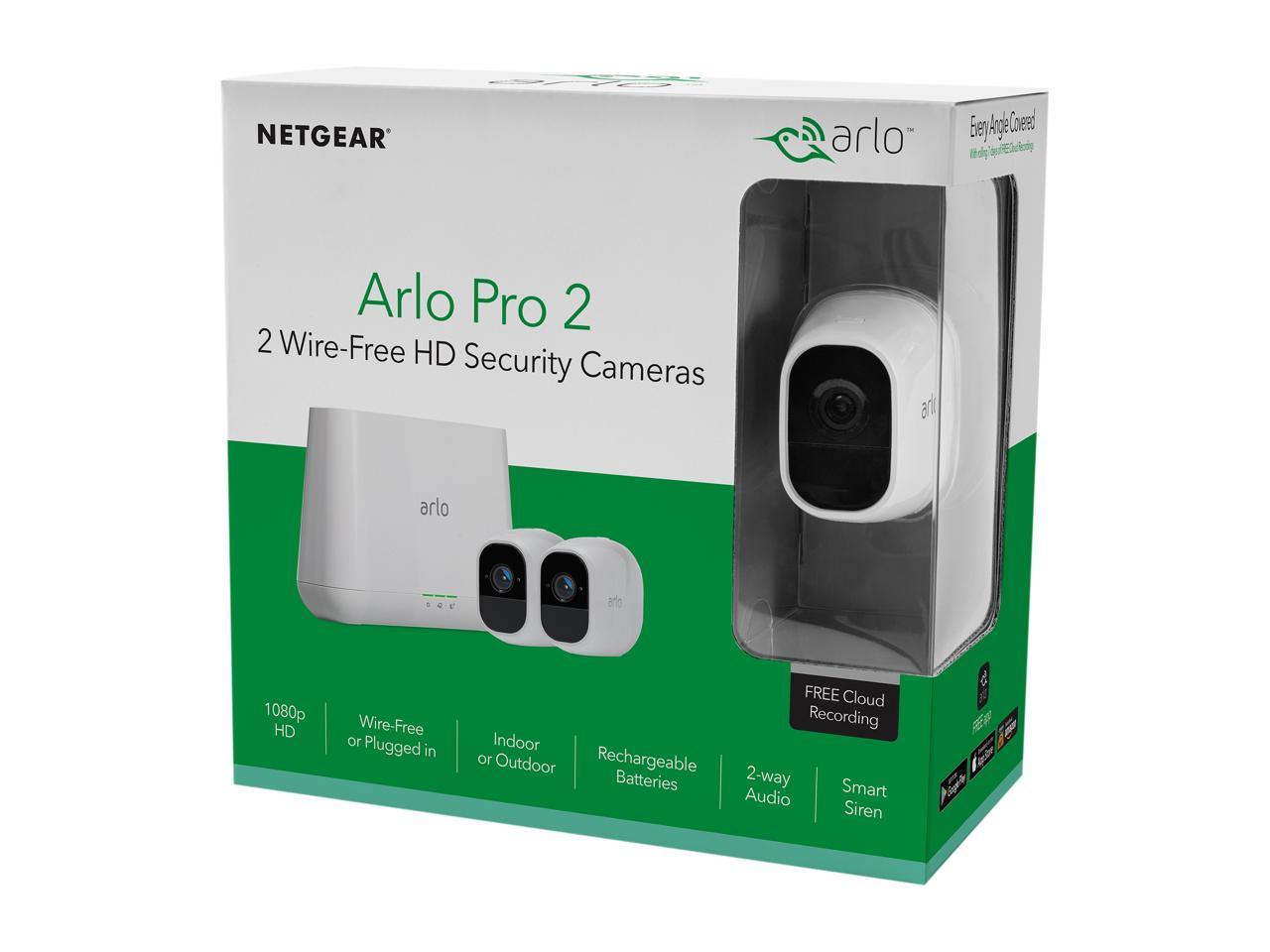 The NETGEAR Arlo Pro 2 VMS4230P security system consists of two smart security cameras and a base station with built-in siren.

With 1080p HD video recording, night vision, dual-way audio, smart alerts and email notifications, the NETGEAR Arlo Pro 2 home-security system lets you keep a watchful eye on what matters to you most—whether it's naughty pets, lovely kids or elderly parents. The elegant yet rugged camera is IP65 rated, ensuring trouble-free performance in various outdoor conditions. The camera can be installed cable-free and powered by a long-life battery (included), for easy deployment in your yard, pool and more spots. And with remote viewing, you can check in anytime, anywhere from your phone, tablet or PC and see what's going on in and around your house. Watch and record crisp HD video in more detail than ever before. Wide-angle PIR motion sensors make sure no movement goes unnoticed. Wire-Free or Plugged In

Arlo Pro 2 is 100% wire-free. Keep your camera charged by using the rechargeable battery, plugging it into a power outlet when indoors, or connecting it to the Arlo Solar Panel (sold separately). The choice is yours. Rain or shine, hot or cold, the IP65-certified Arlo Pro camera will brave it all. Don't pay for cloud storage that you don't need. Keep the past 7 days of motion- and audio-triggered recordings for free. Stop crime before it happens with 100+ decibel siren that can be controlled remotely, or when motion or sound is detected. Listen in and talk back through the built-in speaker and mic straight from your smartphone. Secure your recordings with a USB-drive local backup-storage option.

Capture activity three seconds before a triggered event so you’ll always know what happened, from start to finish. Available when plugged in and used indoors.

Turns on automatically in low light so you can see clearly, even in the dark.

Plays Well with Others

Cons: Lots of false positives until I get them set just right. Silicone covers helped a little. Cameras get triggered by shadows. Batterys need to be charged about every other month.

Pros: Original install/pairing was pretty simple. When working, it was pretty good at picking up people in my driveway at a distance of about 25'. Video quality was good.

Cons: Very disappointed in this system. Updated firmware and then had it installed for a week. The connection was fine for a couple of days, but after that it would lose connection repeatedly. Uninstalling and pairing again didn't fix the problem. Moving the base closer didn't help. Returned it after that week of testing. Not surprised that it only came with 2 batteries. Thats pretty standard, but was shocked to see it did not come with a charging base for the batteries. Without that base, you have to remove the cameras and plug them in for charging. How do you omit a basic part that should be included with ALL rechargeable battery systems. Way to cut corners in the wrong way Arlo.

Overall Review: I had read reviews mentioning the connection being lost before buying this. Hoped I would be lucky, but nope.

Cons: - Unreliable: Cameras go offline randomly and the only way to bring them back is to go up the ladder and replace their batteries. This is really bad for a security camera as you cannot count on it. Check Arlo Pro2's own forum as this is widely common issue and reported by many customers - Night view is washed out and much worse than the previous Arlo Pro - Image quality is marginally better than 720 cameras. I was expecting much more from a 1080p camera

Overall Review: - I do not recommend this product. There are better product out there. Even Arlo Pro (last year version) is much better value.

Cons: -Video quality is not good enough to make out a face in most scenarios - When the Arlo cloud goes down, they have no mirror and you have no access - Random pixilation - It's made by Netgear - Its attached magnetically... so, your last video may be someone walking up and taking it

Overall Review: There are many camera systems that will work far better outdoors.

Pros: Once I got it working, the camera pointed at my front door from 4' away works great

Cons: Setup is a massive pain - the base station does not interface well with devices on the wifi network. In order to get it to update firmware so I could use it, I had to use a computer connected via wired ethernet, Google the web address to access the base station from a desktop, and ignore the website's directions to use the phone app (which, as mentioned, would not work to update the firmware) Camera range is absurdly poor. I have a camera pointed at the gate to my back patio from 10' away, and it does not detect motion on the door opening and someone entering the patio. I would say it triggers at no more than 6 feet. Turning up sensitivity doesn't fix this - it just means that smaller and smaller things within the absurdly small range trigger the camera.

Overall Review: I would not buy this again, and I would not recommend it to anyone. Setup was a massive pain, and with the frankly awful motion detection range the cameras are pretty much useless.

Did you find this review helpful?
Manufacturer Response:
Hi John, Thank you for sharing your experience with us. A minimum speed of 1 Mbps upload per camera is required for your Arlo Pro 2 system. Arlo works with the minimum requirements, but the functionality and video quality might be negatively affected. With a lower upstream bandwidth, there is a greater possibility that video quality might be pixelated and unclear. You might also experience a delay in starting a live stream. You can place your Arlo camera a maximum of 300 feet from the base station. The maximum line-of-sight range of 300 feet is reduced by each wall, ceiling, or other major obstruction between the camera and base station. Learn more on how you can extend the range of your Arlo system and optimize motion detection: https://kb.arlo.com/5568 & https://kb.arlo.com/000062043. Thank you again for sharing your experience. If you need additional assistance, you may reach out to our team by visiting our Arlo Community > Support > Contact Us. Best Regards, Arlo Team