The Best Smart Light of 2018 — But Something is Still Missing 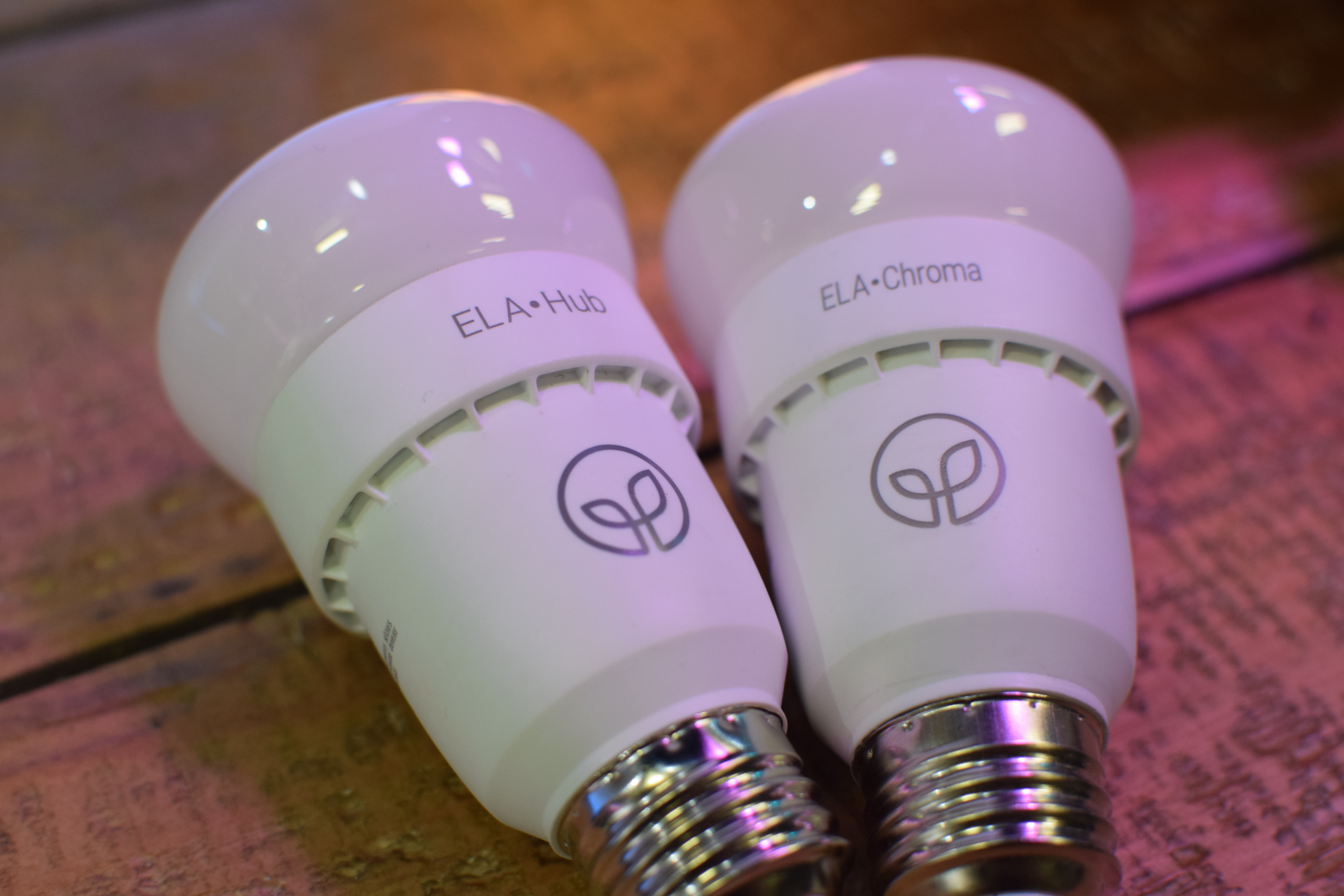 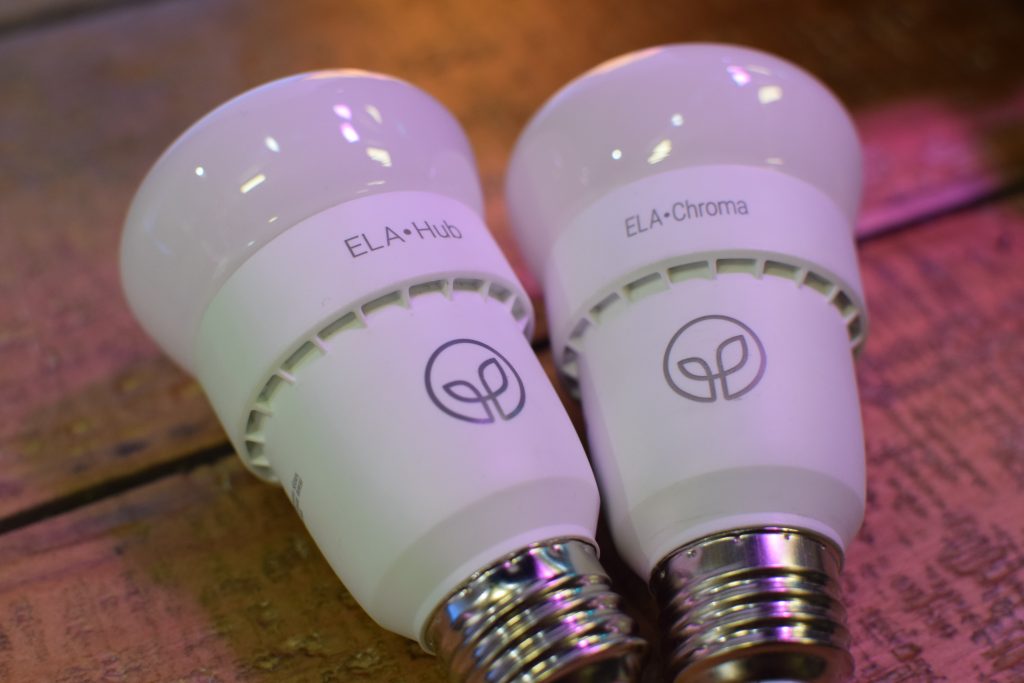 There are tons of smart light bulbs on the market, and if you don’t know specifically what you are looking for when building out your automated ecosystem it can be confusing. Heck, even if you know what you want there are still a ton of bulbs that could fit the bill, and new ones are cropping up each day.

Seriously, from big names getting into the smart device world to new startups, there are piles of bulbs to sort through. But what is the best smart lighting setup? LED strips versus bulbs. Wi-Fi, ZWave, Zigbee, or Bluetooth (don’t get Bluetooth – more on that later). RGB versus white. Temperature adjustable versus standard. The list of options grows long quickly, and it’s hard for one to stand out above the rest. Lumenari’s ELA smart lights instantly jump out above the rest of the pack though, packing a ton of features into connected bulbs that extend the network strength— all without a separate hub. 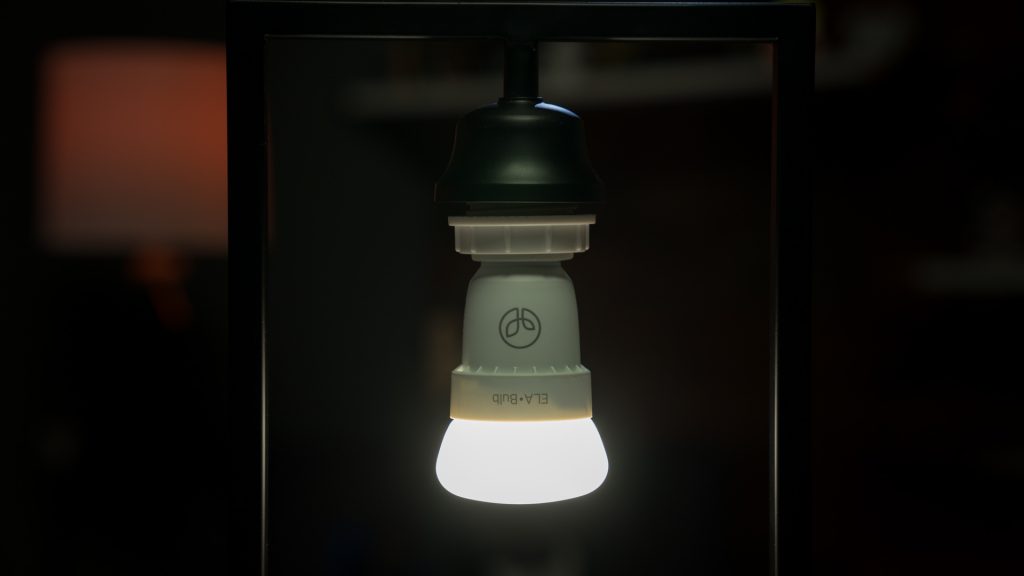 If you haven’t been around much home automation technology, or thinking from the “smart lighting for beginners” framework, it might be baffling to pay anywhere from $20-$70 for a light bulb. The truth is though, the flexibility that smart lighting offers extends far beyond just the novelty of commanding bulbs from anywhere via smartphone— saving energy, setting schedules, linking with other smart devices, changing colors, and even getting tax credits are all benefits of smart lights. So is smart lighting worth it? Definitely. Often times the initial cost is hefty, but the features and functionality gained start to reap the rewards quickly.

Although it sounds like an ancient secret society, Lumenari is a modern smart LED lighting company hailing from British Columbia, Canada with a straightforward motto. Their ELA line of bulbs is named for Ecosystem Lighting Automation, which is designed with the mantra of smart, simple, and functional home automation. 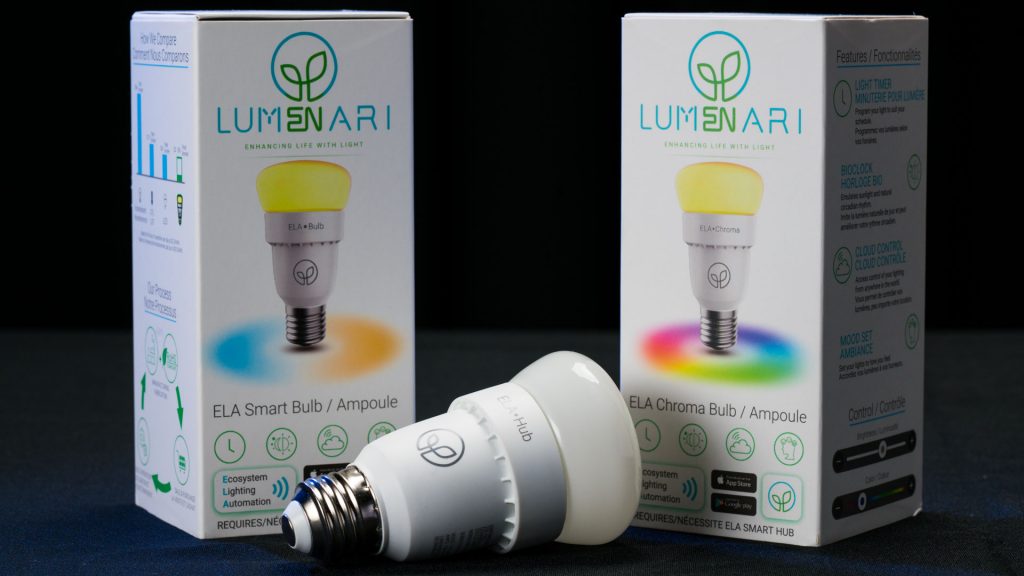 Putting their bulbs through the paces for some time I got pretty acquainted with the ELA ecosystem, which has some unique elements to it. The series is made up of three different bulb types— hub, white, and chroma (RGB)— with a receiver and dual antenna built into each bulb to ensure consistent signal transmission and communication. The collection also has quantum phosphorous luminescent elements, which allows for high color rendering and luminous efficiency.

The bulbs are constructed with a supposed heat-dissipating body, however I did find that they got quite warm. Nothing like a traditional incandescent bulb of course and still less than a regular LED bulb, but similar to other smart LED lights on the market.

Like most smart bulbs, Lumenari’s ELA has Android/iOS app control, automatic firmware updates, multi-user control, temperature and brightness control, and light scheduling. They also have some more unique settings like “Mood”, where pre-programmed temperature and brightness levels offer one-touch changes to single bulbs or whole rooms, or BioClock which mimics sunlight and natural circadian rhythm throughout the day. 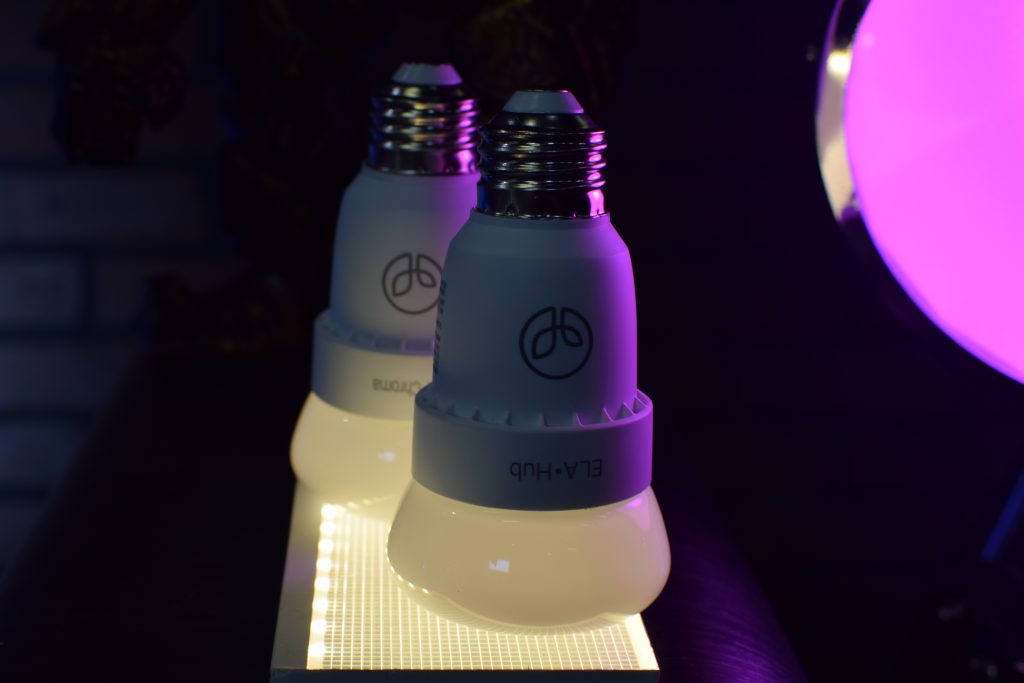 Note that I categorized the ELA “hub” as a bulb. That is because the one element that is missing from the Lumenari ecosystem is a standalone hub like most other smart lighting systems. You know, the blocky thing that plugs into the outlet that connects all the different bulbs, receives updates, and communicates with the app? Yep, none found here.

Instead what Lumenari did is include the hub elements inside the actual bulb itself, which is pretty ingenious for a couple reasons. First off, it clears up that extra plug where the typical hub would plug into while removing extra clutter (always a good thing). Second, it puts the point of connectivity out where the actual system is used, which is better for signal strength. In my previous smart bulb experience, the hub would get plugged into my back bedroom to avoid looking at the clunky thing and taking up a plug I would use otherwise. This made for often frustration with lower signal strength, as the bulbs in question would be used in the living room or entryway. And third, it just makes a more efficient use of cost and materials. The hub bulbs are almost the exact same weight as the satellite bulbs, so what’s the point of all the extra junk?

Smart lighting without a hub is not technically possible for the main protocols, but this is pretty darn close. Now it should be noted that you won’t find a hub on Bluetooth bulbs, but they are also not truly smart with long-range connectivity, interaction with other smart devices, and on a viable protocol until Bluetooth Mesh networking can really become more robust. That’s my two cents on that.

The ELA hub bulb proficiency doesn’t stop there. I’ve held off on calling this a Wi-Fi bulb thus far, simply to illustrate that while it is Wi-Fi lighting it also can function with the ZigBee protocol. So for those that have a ZigBee-run smart home, this is also a viable option. While technically ZigBee is a Wi-Fi protocol, not many bulbs that I know of have that cross-protocol functionality.

Is the Bulb a Hub or is the Hub a Bulb? 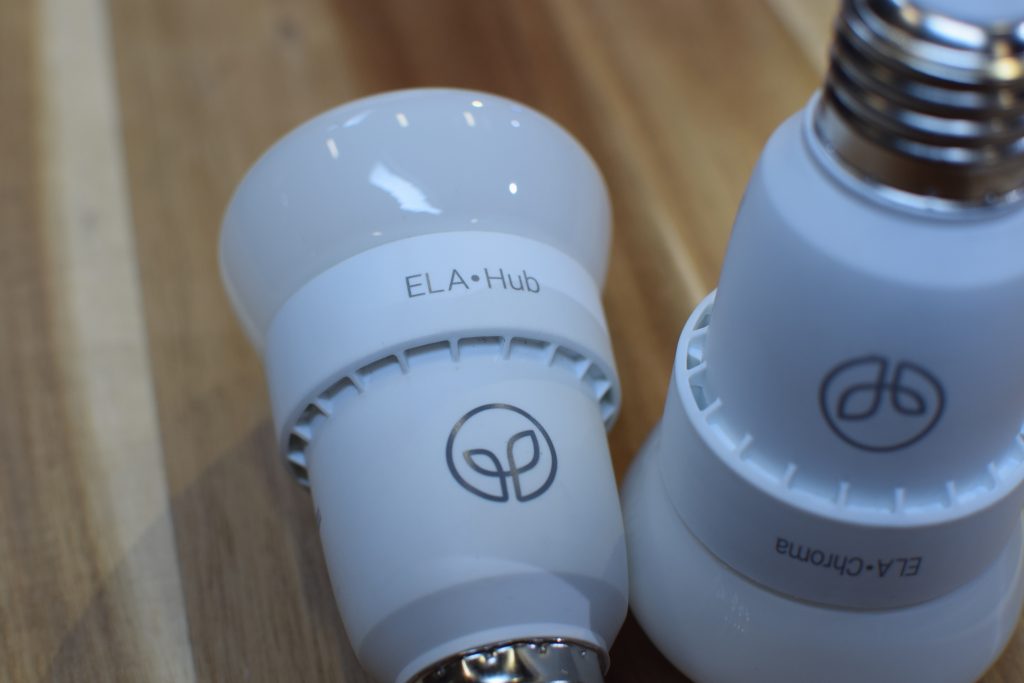 Combining the functionality of two devices into one often feels like a bad remix. Sounds good in theory, but in practice there is something lost along the way and it loses part of one or just flat out fails in both. Fortunately, with the ELA smart bulb/hub combination this isn’t the case.

Each hub bulb can connect up to 80 different satellite bulbs, which is plenty to outfit most homes entirely, but additional hub bulbs can be added to support larger lighting ecosystems. The cherry on top is that it doesn’t just act as a hub for the ELA lights, but also as a Wi-Fi and ZigBee repeater.

The critical value of having this hub bulb as a signal extender becomes blatantly apparent when incorporating into a functioning smart home. Different devices placed in various locations in the home (and different distances from the router) will get different strength signal, and all the devices are vying for bandwidth on the same source. This functionality provides a boost of Wi-Fi (or ZigBee) strength anywhere you place it, which can alleviate some of the congestion and help the overall network function more smoothly.

In fact, this also helps for smartphones and laptops too, since all the other devices also run on Wi-Fi and suck up the bandwidth during use. Need more Wi-Fi strength at corners of a massive house? Buy additional hub bulbs and you should be all set. This is the kind of revolutionary development that shines through with the winning devices and sets the bar for the connected home of the future. No other smart bulbs I am aware of can do this. 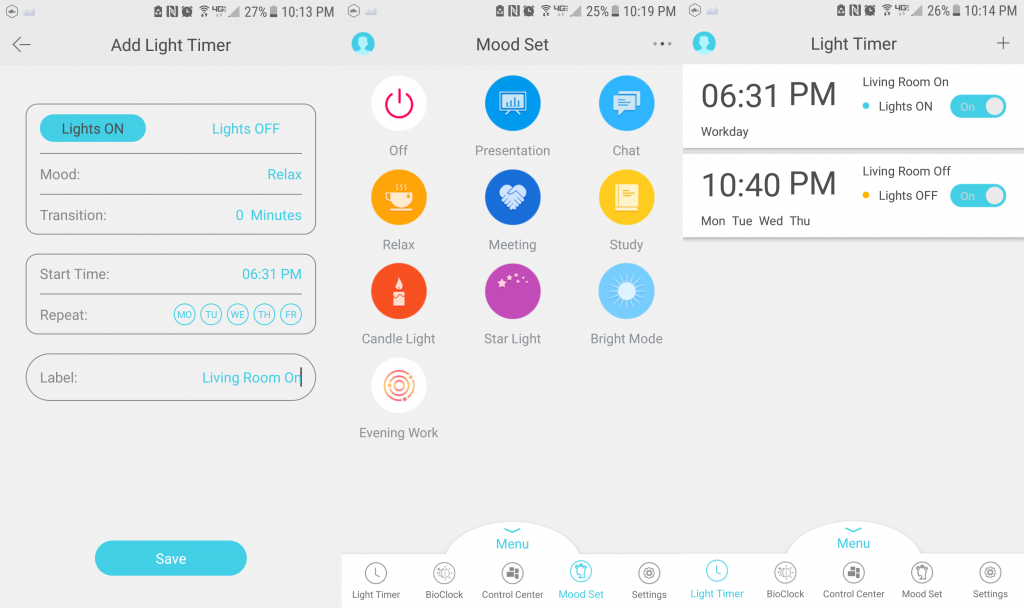 The lighting side of the ELA hub bulb functions very similarly to the satellite bulb, in that they are both operable via the app for their smart functions. The both have brightness and temperature control as noted, and have a max brightness of 600 Lumens.

Their color range varies from 2,700-6,500K, with the pre-set Moods covering the full spectrum of that range (the Candle mode is especially curious). The big difference in performance between the two is the satellite bulb has a 30,000 hour life expectancy, while the hub bulb is 25,000 hours.

When it comes to price, the hub bulb is a cool $48.99, while the satellite LED bulbs are $23.99. That $24 bucks is down in the measly Bluetooth end of the smart lighting cost pool, with far superior marks in every way.

Let There be Color 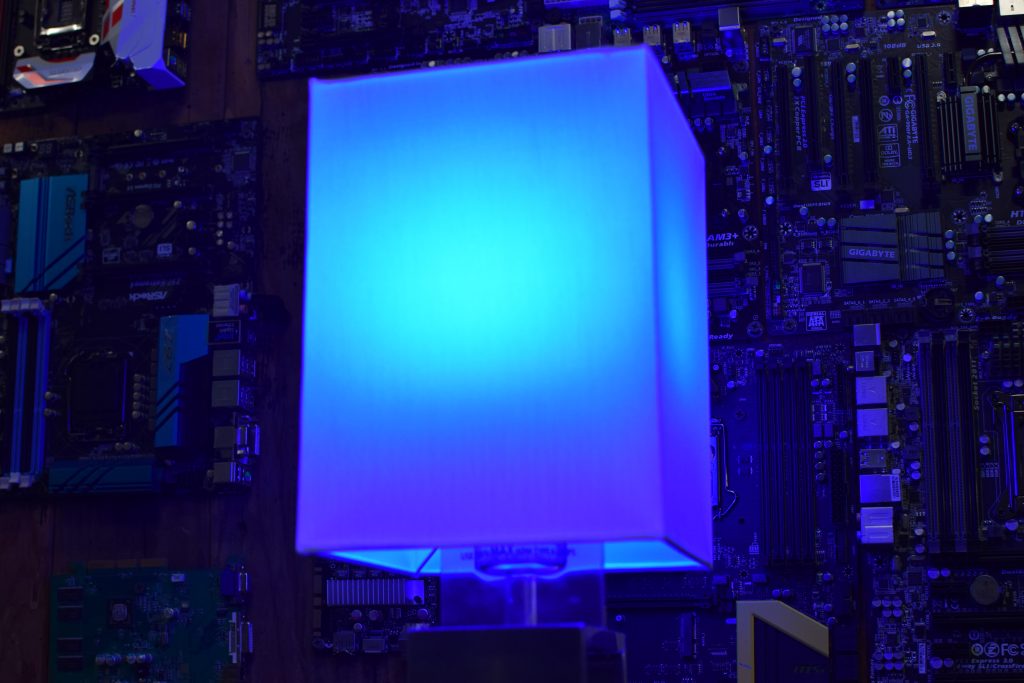 To spice things up a bit, the ELA Chroma smart light gives users access to 16 million colors at the swipe of a finger for when the party mood strikes. Just like with the white bulbs, the Chroma LEDs can max out at 600 Lumens, with a temperature range of 2,700-10,000K. For 30,000 hours of light, these rainbow bulbs will run $39.99.

I would probably deck out my home with the white bulbs and a few select RGB lights carefully placed, since it isn’t often that one would want an entire room draped in indigo luminescence.

But Does it Voice Control? 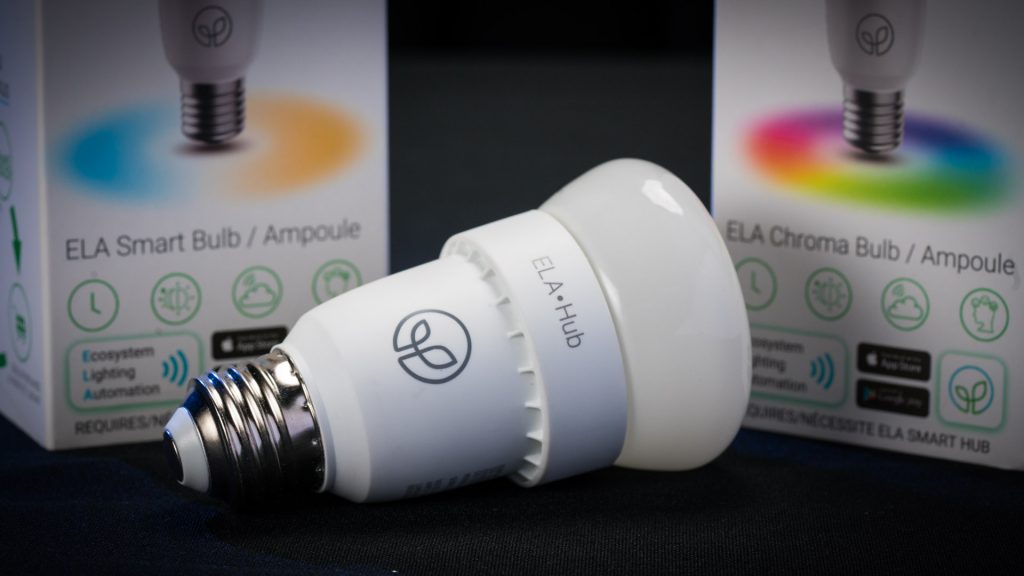 Not to leave anything to chance, the folks at Lumenari have made the ELA lighting system compatible with Amazon Echo devices and Alexa via the ELA skill, which enables voice-activated lighting, grouping, dimming, color changing, and more. In today’s Smart Home landscape you pretty much have to include some Alexa functionality to be taken seriously, and the ELA bulbs also have voice control on the horizon with Google Home compatibility as well.

For the real home automation junkies and those who want to start having real fun, the lights are also IFTTT (If This Then That) compatible, to string together multi-stage integrations with other devices and actions.

For example, with IFTTT integration (and in the portal) you can have the lights flash red when motion is detected by a smart motion sensor or security camera. When you receive an email, the Chroma light can flash green, and numerous other possibilities are a few swipes away. My favorite use-case for this would be linking up with Google Services (like Maps with location data) so the lights can be geofenced to activate when I pull into the driveway. Sure, I like having the more prominent lights lit on a timer, but the interior ones that function less for security and more for navigation would be great to have automated. 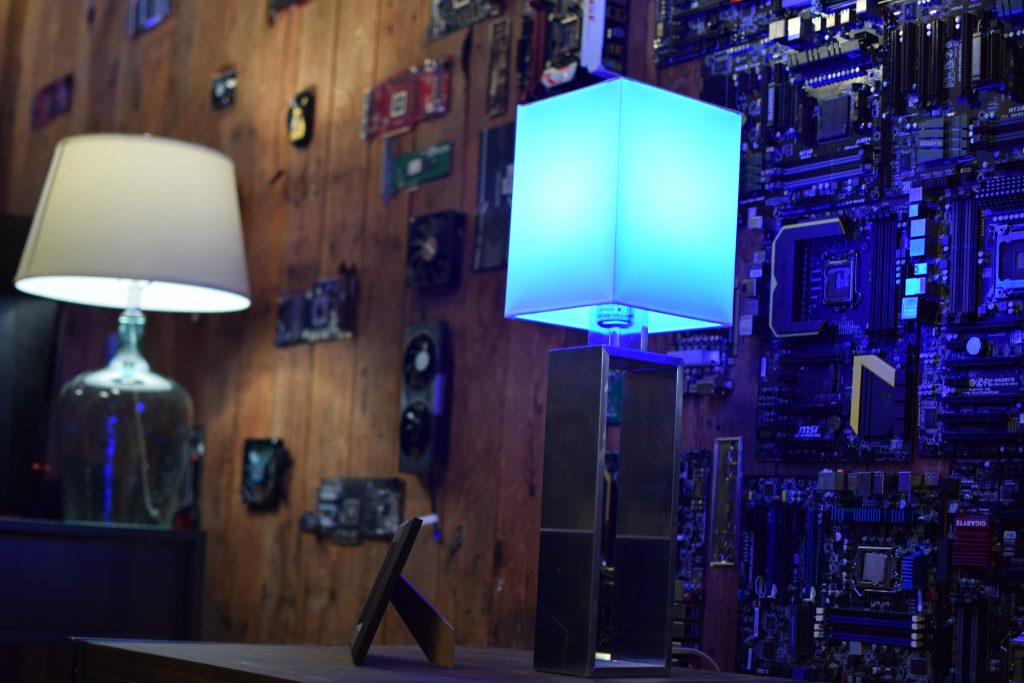 I can’t help but give major props to Lumenari for making a product like this with a price point as absurdly reasonable as they have, and I’m still a little unsure they didn’t fudge a number here. Not only have they managed to do what others have failed to think of (or take the initiative to put into practice) by incorporating the hub controller into the bulb, it is cross-functional in Wi-Fi or ZigBee ecosystems.

Tack on the Wi-Fi (and ZigBee) extender functionality, and the future secret upgrades Lumenari has in the works, and you have the most formidable lighting system I’ve seen yet. All that for a multi-bulb setup under $100 will surely change the way that smart lighting companies react moving forward. The only thing they haven’t done is introduce strip lighting, but knowing what they’ve done with the first line, I wouldn’t be surprised if we saw this too before long.