By Mike AssummaOctober 15, 2018No Comments 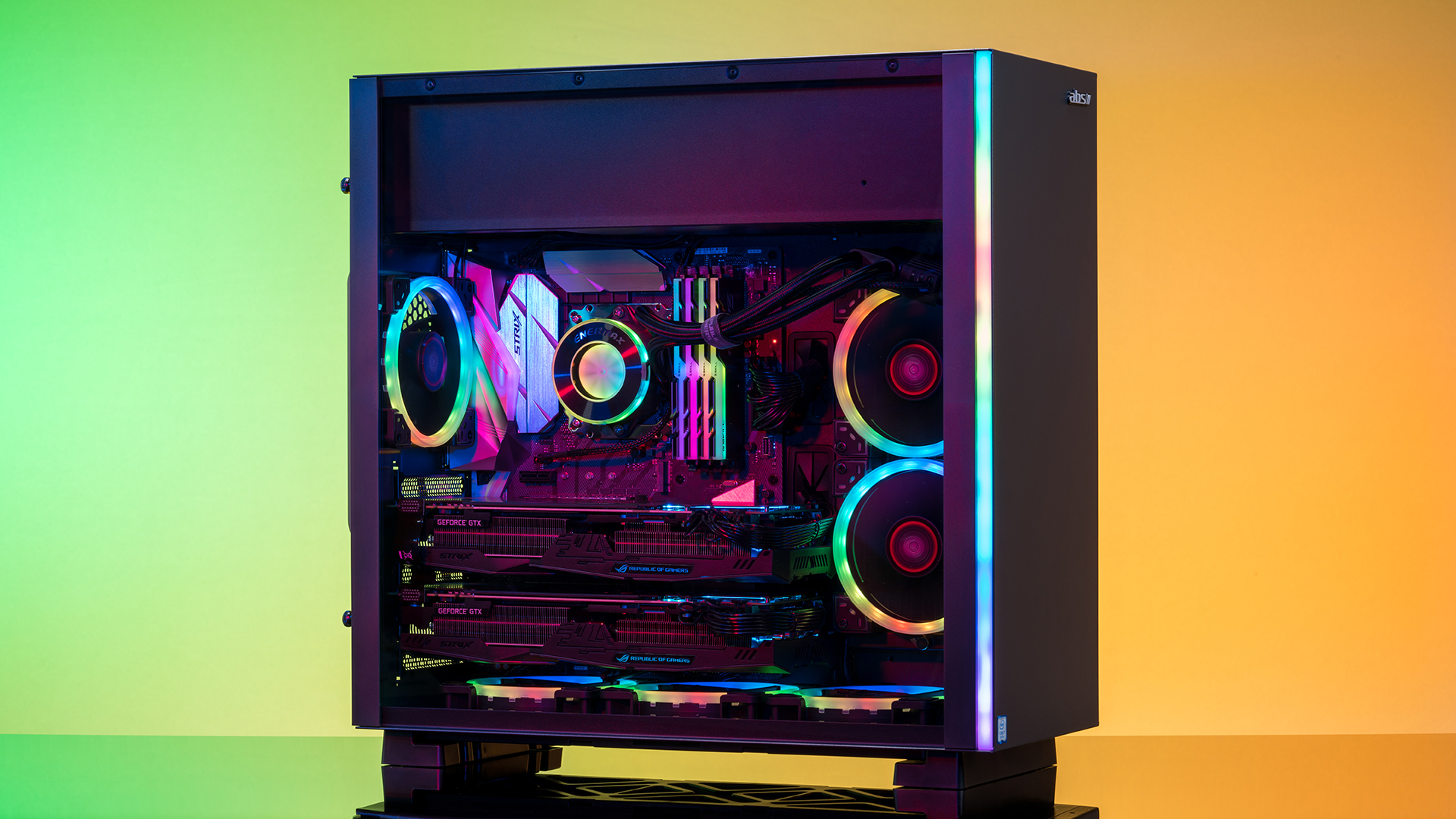 Disclaimer: the two brands at that are the central focus of this piece, ABS and Rosewill, are both business units of Newegg, which also owns us here at Insider.

For those not in the know, ABS designs, assembles, and sells a variety of pre-built PC systems from off-the-shelf parts. They have a fair variety of configurations; some are targeted at the enthusiast gaming market, with others more suitable for business use. Rosewill designs and manufactures a variety of computer components, including power supplies, cables, peripherals, and cases.

Of course, this business arrangement is what made an ABS and Rosewill collaboration possible in the first place. Rosewill supplied some of their uniquely designed components, which ABS then paired with ultra-high performance gaming parts from across the industry. In my eyes, the end result is simply proof that these sister-companies should team-up more often.

We were supplied with the ABS/Rosewill Prism S500 build to review, which we dove into below the break. This system goes on sale 11/30/2018; until then, you can check out the pre-order page. 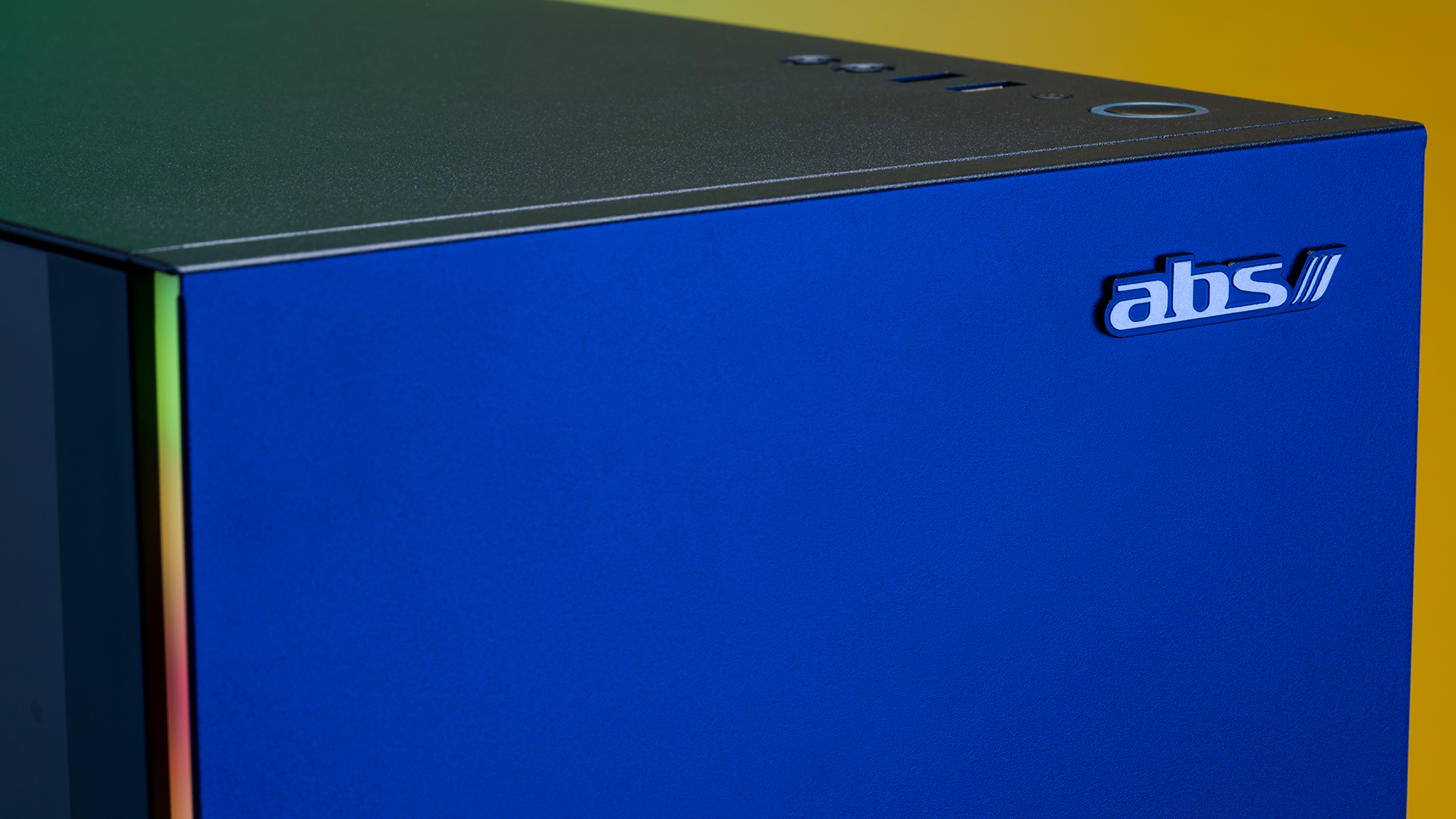 There are two focuses to this article; I’m going to start off by discussing the Rosewill Prism S500 chassis as opposed to the ABS Prism S500 build, which we’ll cover in the next section.

Probably the first thing you’ll notice about the S500 is where the power supply isn’t. The entire bottom of the chassis is occupied by a number of fans, with the motherboard placed exactly above. Instead, the PSU is enclosed in a shroud running along the upper interior of the chassis, with a ventilation cutout just above where the motherboard’s rear I/O array would sit.

It’s an unusual design decision for a modern gaming chassis, but it’s not unprecedented, nor is it without some potential benefits. Remember that for many years, the vertically oriented pre-built PCs of the nineties and early aughts often had a high-mounted PSU, and I’m sure most millennials have a computer in this configuration they remember fondly.

The real, tangible benefit of this configuration concerns one of the most basic principles of thermodynamics: Hot air rises, cold air falls. In a normal, PSU-below-Motherboard configuration, some amount of heat will rise off the power block and be sucked in by the intake fans on your typical GPU, or could even flow across the heat-sink on a CPU air cooler. The warm air generated by your typical PSU won’t exactly cripple a PC, but it’s not rocket science to say that cool air is better for cooling than hot air. With the PSU at the top of the chassis, any heat it generates is either blown out the back, or will passively rise up and away from any other components.

On the same token, Rosewill has also flipped the top fan mounting points to the bottom of the S500. There are three fans down there, and they’re configured as intakes. This has the effect of pulling in cooler air from below, and feeding it up directly into GPU air-cooling assemblies. While I wouldn’t go as far as to say that this configuration is going to revolutionize chassis design, I would state that this is likely the optimal setup for a strictly air cooled system. 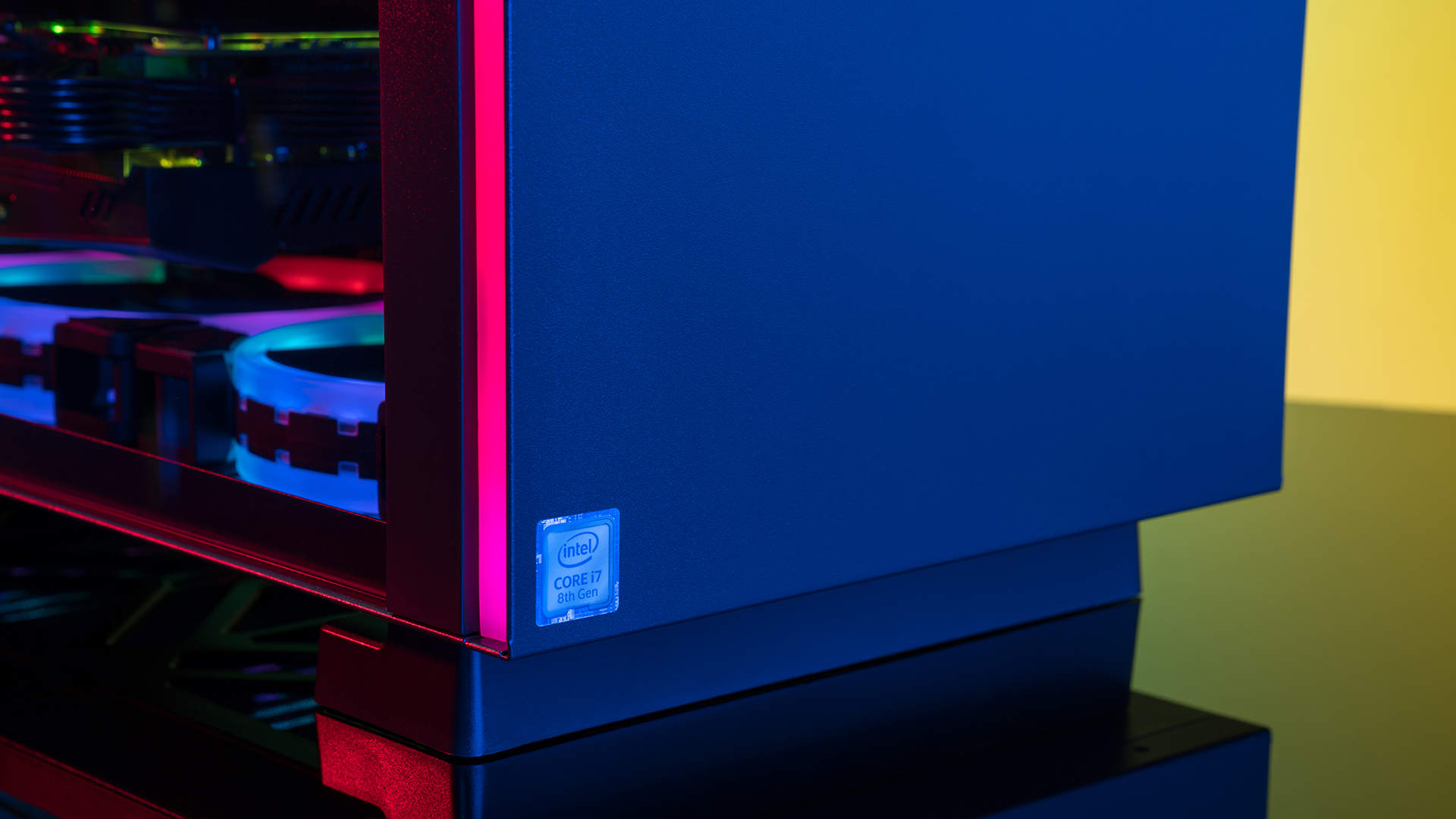 Of course, there is one fairly obvious downside to this configuration, and that is radiator placement. Typically you’d want your cooling loop’s radiator at the top of the case, to most efficiently vent heat up and away from everything else. If there’s no fan/radiator mounting points on the top of the assembly, you might be forced to mount the radiator in a less optimal position. Fortunately, Rosewill considered this when designing the Prism S500. There is a mounting position just East of the motherboard (with some rubber-grometted pass-throughs sandwiched in-between) suitable for 240mm radiator and/or fan solutions. Right behind the mount, there’s ample ventilation stamped into the far side case panel.

While not as immediately noticeable as shroud and exhaust placement, I do have to touch on the craftsmanship and build quality of this case. The S500 is coated stamped steel, as is industry standard, but it has the sturdiness and structural reinforcement you’d find in other high-end chassis. Also, when fully built in, visible welds and rivets are minimal, for an extremely clean look.

The near side panel features tempered glass, and is held in by two screws on the rear panel, as opposed to a nut on each corner. Personally, I think this makes for a cleaner look, as panel nuts tend to be distracting. Also, the left and right sides of the glass panel have a metal trim, which holds the panel in place, structurally reinforces the panel, and provides a great grip for handling the panel so you don’t get any fingerprints on the glass itself.

Also, if you’re into RGB, the PRISM S500 has what I’d consider a staggering amount of RGB lighting. It’d almost be too much, if it wasn’t done so well. First, there’s there are the two strips on the front panel. The diffusers on these are beautiful; you can see in the accompanying pictures how well the colors blend in Rainbow Mode.

Inside the chassis, the S500 includes four RGB fans with double-sided diffusers. What this means is that they generate a ton of light out of both sides. Since the S500 comes with one fan on the rear, and three on the bottom intake, you get some illumination behind the case, and a really satisfying under-glow on whatever surface the S500 is placed.

Best of all of these RGB components integrate seamlessly with ASUS Aura Sync or MSI Mystic light, so you can keep the Prism S500 in tune with the rest of your build. 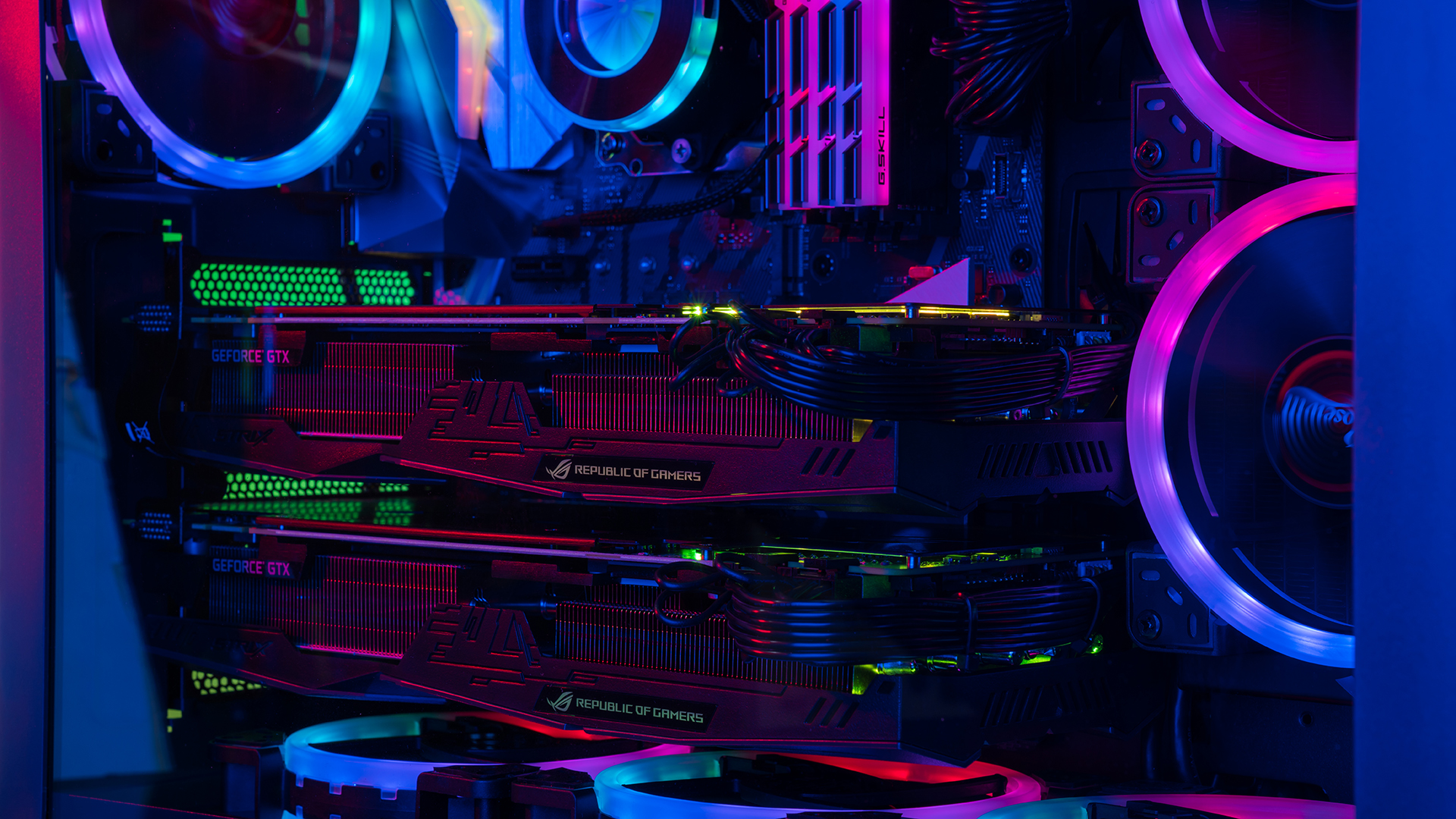 Now, the second half of this build is, well, everything else. Rosewill’s Prism S500 chassis supplied the foundation, but ABS filled that chassis with supremely powerful components to create a build that they call the Prism S500 SLI… I’m positive that this naming scheme will never, ever confuse anyone.

Branding gripes aside, let’s start with a spec list, before diving into some brief performance numbers:

That’s all pretty much what you’d expect in a high-end enthusiast gaming PC. In terms of sheer performance, you’ve got a powerful multi-core CPU, plenty of RAM, and SLI GPUs. There are plenty of touches an enthusiast will appreciate, like a fully modular power supply, and a primary OS SSD paired with a high-capacity data HDD for games and media. Plus, the motherboard and cooling loop’s water pump are also ASUS Aura Sync compatible, which means they’ll match up perfectly with all of the RGB on the S500 Chassis.

If I had one complaint with this parts list, it would be regarding the SSD. Obviously Intel makes high quality SSDs, but a SATA connection is a SATA connection. In this day and age, there are some stellar NVMe options out there, and for a PC in this performance bracket, something like Intel’s own 256GB 600p M.2 SSDs might have been a better choice. Yes, they’re about $75 more expensive than the 545s drives, but the Prism S500 is already a 3,800 dollar computer. Anyone seriously considering this build probably isn’t pinching pennies, even if ABS did bump up the price to include a faster OS drive. 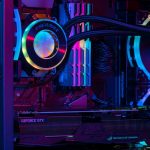 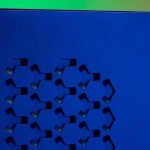 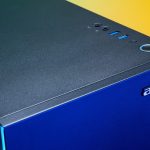 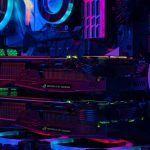 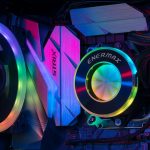 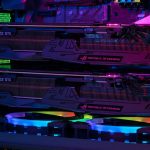 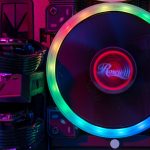 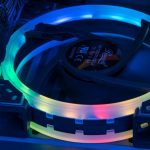 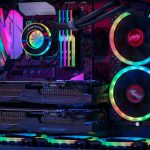 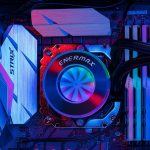 On the flip side, there’s an argument to be made that ABS made the right call here. The ASUS ROG STRIX Z370-E Gaming has two M.2 slots, which is awesome, but like most motherboards, they’re situated right next to one of both of those big, hot GPUs. Not to mention that your average SSD makes a fair amount of heat itself. In the interest of pure thermal optimization, ABS might have opted to go with a 2.5” SSD so that they could mount it on the back side of the chassis, further away from the heat of the GPUs.

Alright. So know what’s in the Prism S500 SLI and we’ve talked about some of ABS’ design decisions. So now the question is –  what can one actually do with all this horsepower?

We tested our review unit with a handful of in-game benchmarks. We used Assassin’s Creed: Odyssey, Rainbow Six: Siege, Middle Earth: Shadow of War and Total War: Warhammer 2 (which is a ton of subtitles, now that I think about it). Each of these games feature a built-in benchmarking tool.

We ran each benchmark four times, and logged minimum, maximum, and average frame counts. In the chart below, we are presenting the average of each of those metrics, for each game. (All four tests for a given game were all a within only a few frames difference.) Additionally all games were tested with the highest graphical preset (usually Ultra), even when custom options for better graphics were available. Display options for all tests were set to Fullscreen at 1920×1080 resolution, with a software-set refresh rate of 144Hz, and V-Sync off. It should also be noted that some of these games are not technically made to fully utilize Nvidia SLI technology, and would have received no benefit from having both of them installed. 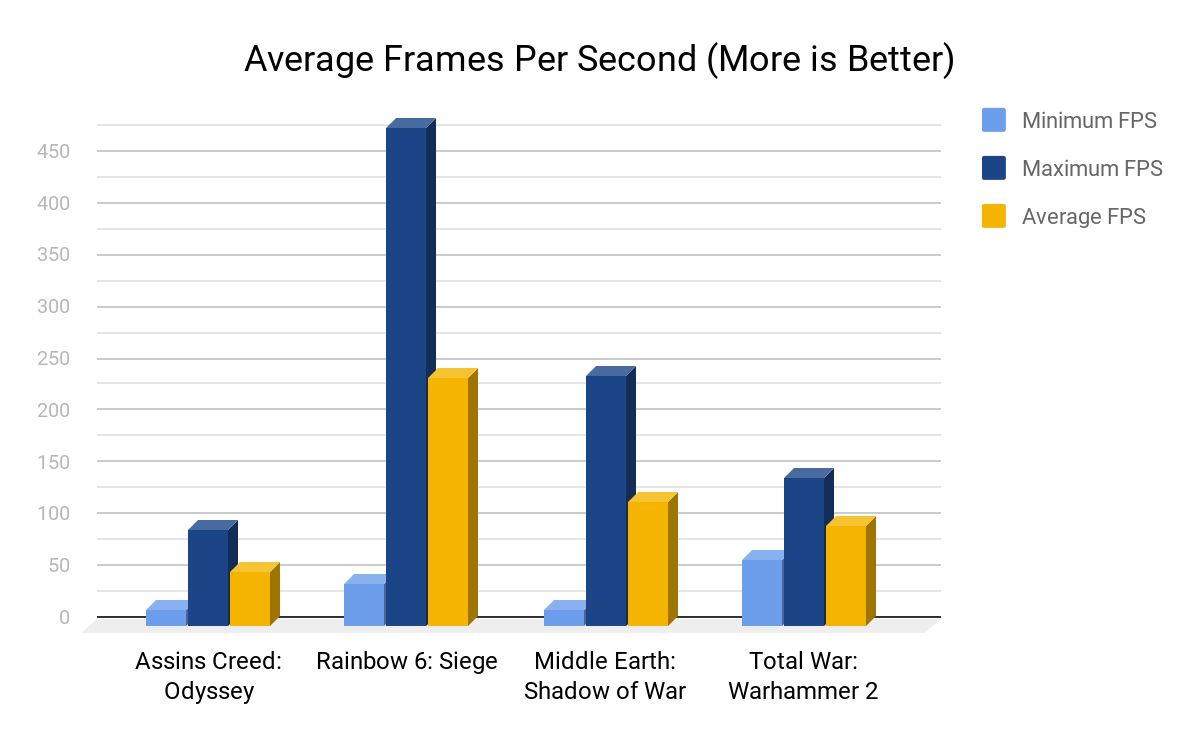 Despite the disparity in height is some of these columns, our result paint a pretty clear picture. Odyssey, the newest game with the best graphics, really challenged this build, which is why we picked it. Odyssey has a great dynamic Level of Detail system, but it still taxes hardware in painting it’s grandiose landscapes. Performance in Odyssey dropped momentarily when transitioning from an indoors scene to outdoors, which brought down it’s overall average.

Rainbow 6 was included because it is a highly optimized esports game designed to run on a variety of computers. Even on some of the top settings it can offer, this game’s maximums were wall above anything else. Rainbow 6 saw the biggest dip when it had to render particle intense effects, like explosions blowing through walls. Similarly to Odyssey, Shadow of War took the biggest hit when moving from inside to outside It was a solid performer, though personally I don’t think it looked as good as Odyssey.

Finally, we chose Total War because we wanted to test rendering lots of little, finely detailed things in a small space, rather than large landscapes. It performed solidly on the Prism S500, with probably the least difference between its minimum, maximum, and average framerates. The takeaway from all of this is the the ABS Prism S500 an handle any game you can throw at it, but also that we’re seeing some really, really high fidelity graphics that can work even some of the best hardware on the market.

Bringing It All Together 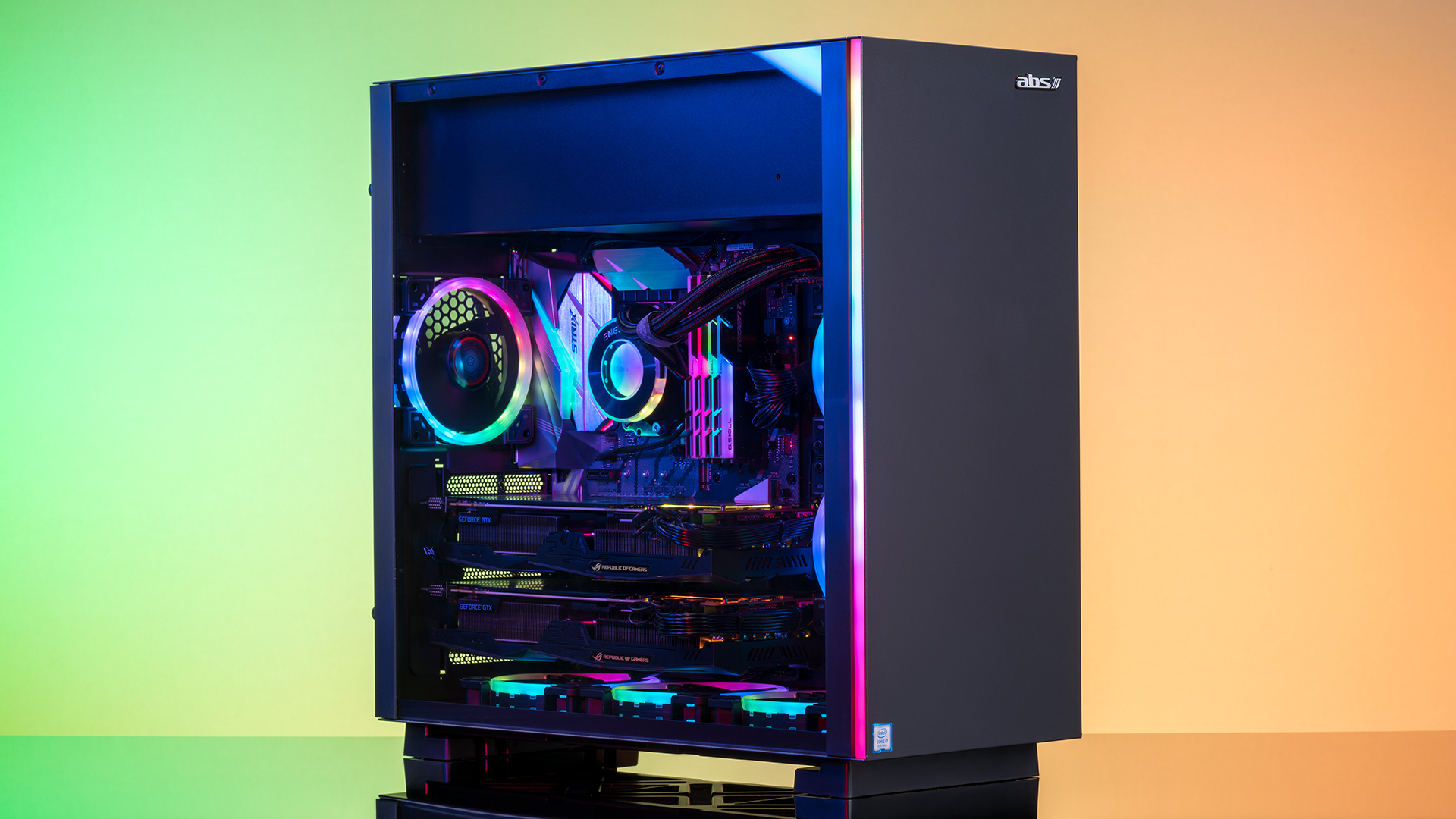 With the Prism S500 (both pre-built PC and chassis), I think it’s fair to say that Rosewill and ABS complement each other wonderfully, like a nice peanut butter and jelly sandwich. Joining Rosewill’s craftsmanship and eye for design with the technical knowledge from ABS has led to something great in the Prism S500 pre-built gaming PC. It delivers the looks and performance any serious gamer can appreciate. Now if they could just get the naming down…

You can preorder the ABS/Rosewill Prism S500 on Newegg.