By Craig NiemanJuly 2, 2019No Comments 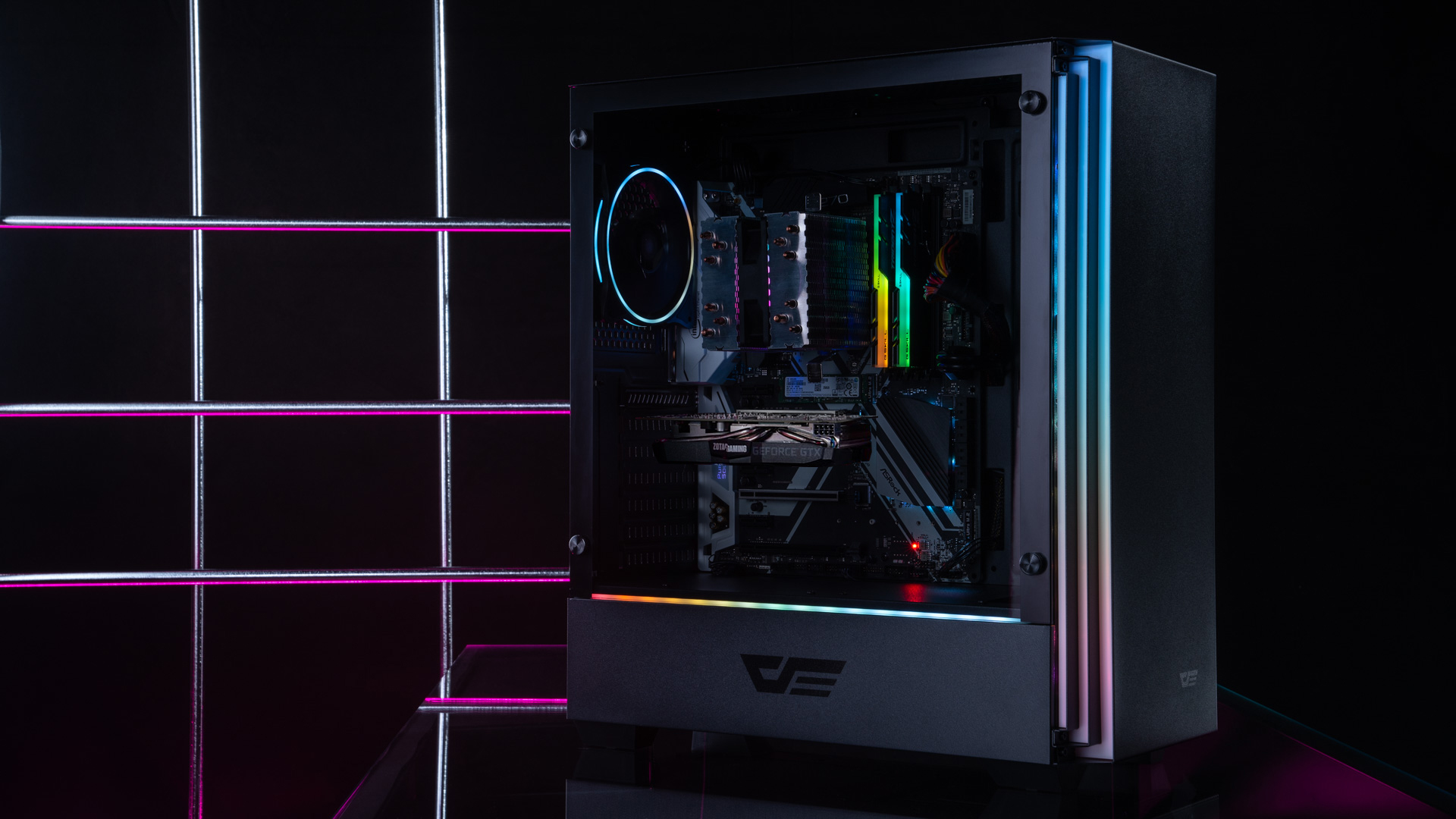 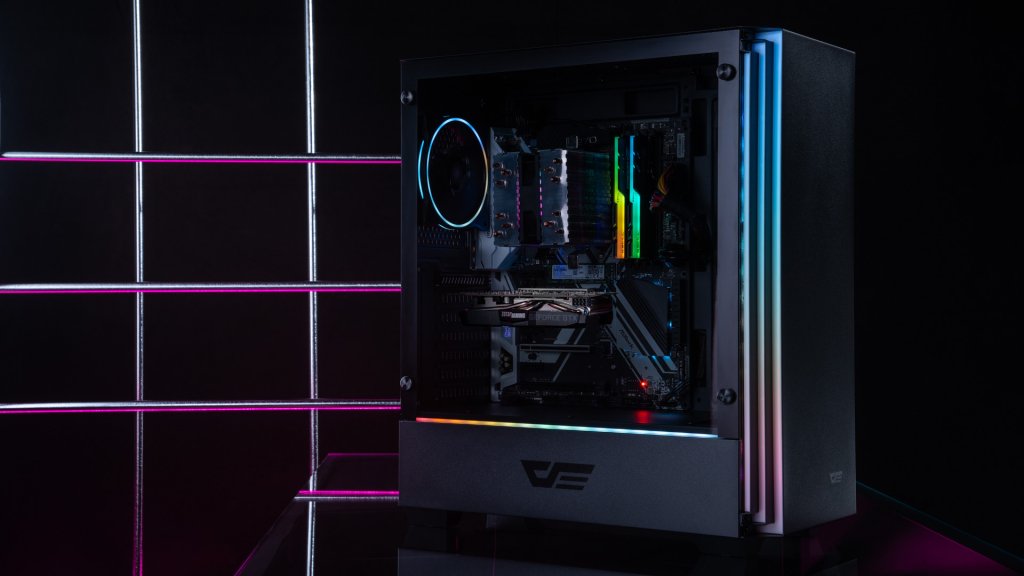 One of the most exciting things about working at Newegg is getting our hands on the latest PC parts, sometimes from up-and-coming manufacturers. Even more exciting is when these new parts makers come out of nowhere and make us and our readers stand up and pay attention, rapt with anticipation for whatever new tech they’ll put out next. We’ve profiled PC component manufacturer darkFlash multiple times in the past, looking at their Shadow CPU cooler and crafting a build with their Phantom case and DT240 water cooler — the response to which was so great that we went ahead and put together another darkFlash-based build, this time to show off the darkFlash J11 Case and the darkFlash L6 Dual-Tower CPU Cooler.

Both the J11 Case and L6 Cooler are flexible enough to work in builts across many performance levels. This new build was a bit more elemental than what we put together with the Phantom, since we wanted to put more of the spotlight on the darkFlash components, but you could just as easily drop the latest and greatest parts in the mix without any issues. That being said, the gaming rig we assembled is far from a pushover.

We used an ASRock Z270 Extreme4 Motherboard as the base of our build, an older board, but not so old that you can’t outfit it with capable modern hardware. To go along with this LGA 1151 mobo, we chose one of the best compatible CPUs we had laying around: an Intel Core  i7-6700k. Albeit not the latest-generation processor, the i7-6700k is still plenty capable of delivering solid performance for gaming and streaming. It’s overclockable too, so you can squeeze that extra bit of performance out in case you need it. For RAM, we slotted in G.SKILL Trident Z RGB Series 16GB DDR4 Memory, for its killer performance and beautiful color worthy of the vibrant darkFlash components we were building with.

Moving on to the GPU, we opted for a Zotac GeForce GTX 1660 for a mix of modern performance and affordability; it’s also one of the lowest cost options that still enjoys ray-tracing support, even if it’s scaled down from what you’ll find in RTX cards.

Rounding out the build was our power supply, a Corsair CX850M, and our SSD, a 250GB Samsung 850 EVO SATA M.2. 250GB is a low amount of storage to be sure, especially for a gaming machine, but for our needs with this creation, it would suffice. If you want to replicate the build at home, we’d recommend springing for something like a 1TB Samsung 970 EVO Plus NVMe M.2 SSD, which will not only give you a lot more storage, but also the improved performance of an NVMe drive.  As for the PSU, the 850W delivered by the Corsair would give us all the power we needed and then some. 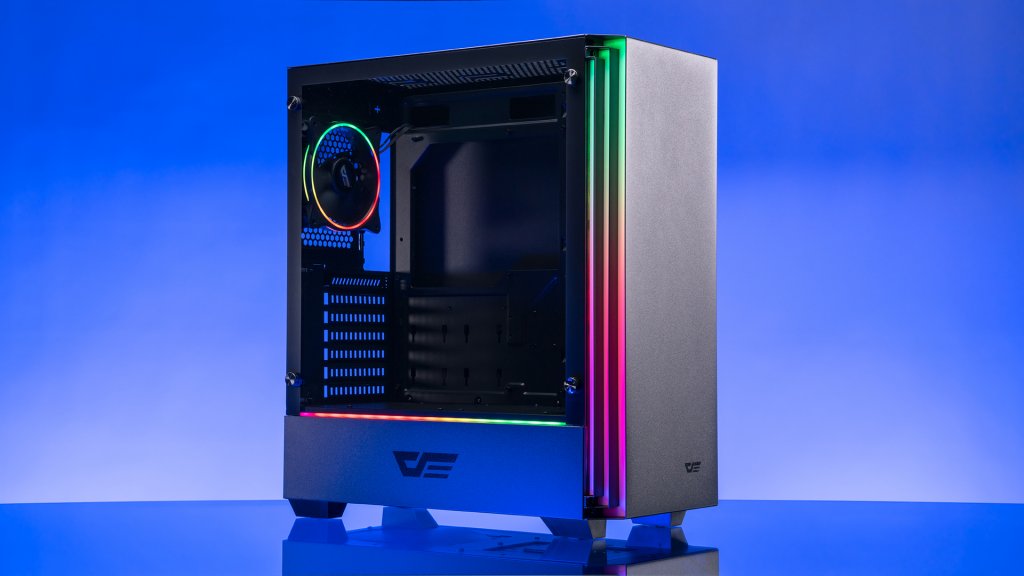 Now onto the centerpiece of our build: the darkFlash J11 Case. While the J11 is promoted as sporting a “minimalist design,” it still features the requisite RGB lighting you would expect from a gaming case, and it’s no less impressive than what we’ve seen from other darkFlash components — if you haven’t been keeping score at home, that means you’re in for a treat.

In our opinion, the best part of the J11 is its absolutely stunning color. It’s clear that darkFlash put quite a lot of care into the lights on the J11, as it exhibits lush colors with no discernable bleeding. There are three main RGB light sources on the case: two RGB strips, one divided into three sections and running vertically down the front-left, and the other running horizontally along the left side of the case; and a preinstalled darkFlash MR12 RGB fan. Each of these light sources emits bright, rich colors, and can be toggled between a range of lighting modes — more on that later. One more subtle — and in our opinion, the niftiest — lighting element is a small RGB spotlight of the darkFlash logo that projects from the bottom of the case. While it doesn’t seem like much on the surface, it’s a pretty cool effect in person, syncing with the color of the RGB strip at its side, and providing a bit more character to the chassis. 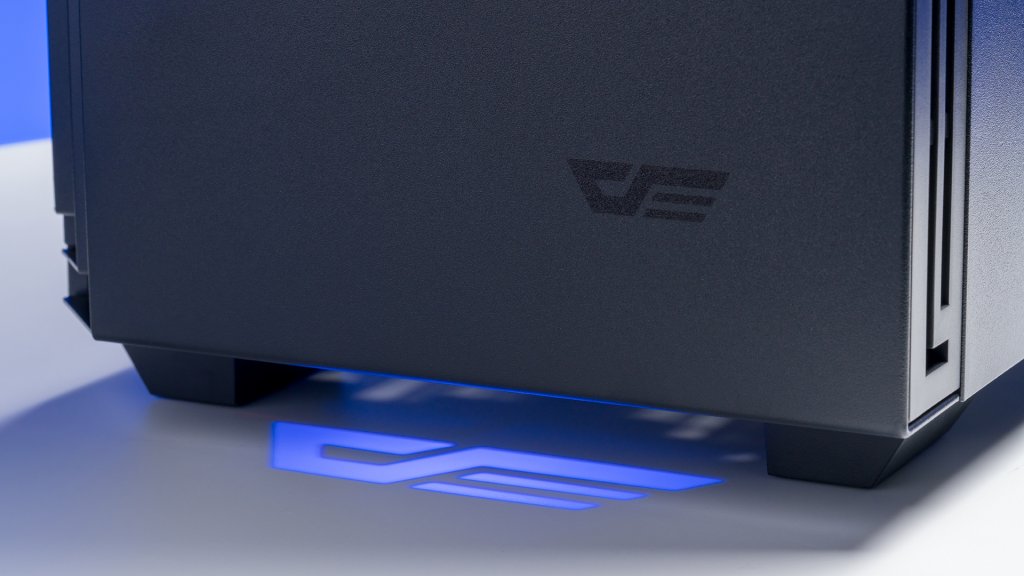 The J11 accommodates ATX, Micro-ATX, and mini-ITX motherboards, so our ASRock mobo was an easy fit. As for the PSU, we managed to install our Corsair ATX power supply, but not without a bit of difficulty. For this reason, we’d recommend potentially going with an SFX power supply if you’ll be building with the J11 and don’t need an especially powerful PSU, if for no other reason than easy installation.

On the plus side, the easy cable concealment offered by the J11 more than made up for our struggles with installing the power supply. The generously sized pass-throughs were easy to work with, and the case’s shroud hides wires well which can simply be attached and detached with thumbscrews.

As far as cooling options are concerned, you’ll find the aforementioned darkFlash MR120 120mm RGB fan at the rear of the case, but there’s plenty of room for expanding with more case fans or even a liquid cooling solution. The J11 supports 360mm, 240mm, and 120mm water cooling radiators, or up to six case fans. If you’re already invested in an RGB ecosystem like ASUS Aura Sync and want to integrate it, the J11 includes a multi-function controller that syncs with the 3-pin addressable RGB header on motherboards. Be forewarned, however, that this support only extends to the thin 5V RGB light strip on the left side of the case; in other words, don’t expect to harness the entire beautiful package of the J11 with your Aura Sync setup.

That’s not to say you’re at a loss when it comes to cool lighting options. The J11 features fifteen lighting modes to toggle between, like a pulsating rainbow pattern or simple single static color modes. The controller can also connect to other darkFlash RGB components like their DR12 PRO and MR12 case fans, so there’s room to add even more color to your build. Again, be aware that these component connectors are proprietary headers only for darkFlash fans instead of the standard 4-pin headers you’d find on some other parts. While to some this may sound like a dealbreaker, darkFlash has a good track record for delivering beautiful components with solid performance, so sacrificing RGB integration with other brands is not a big deal in our opinion. 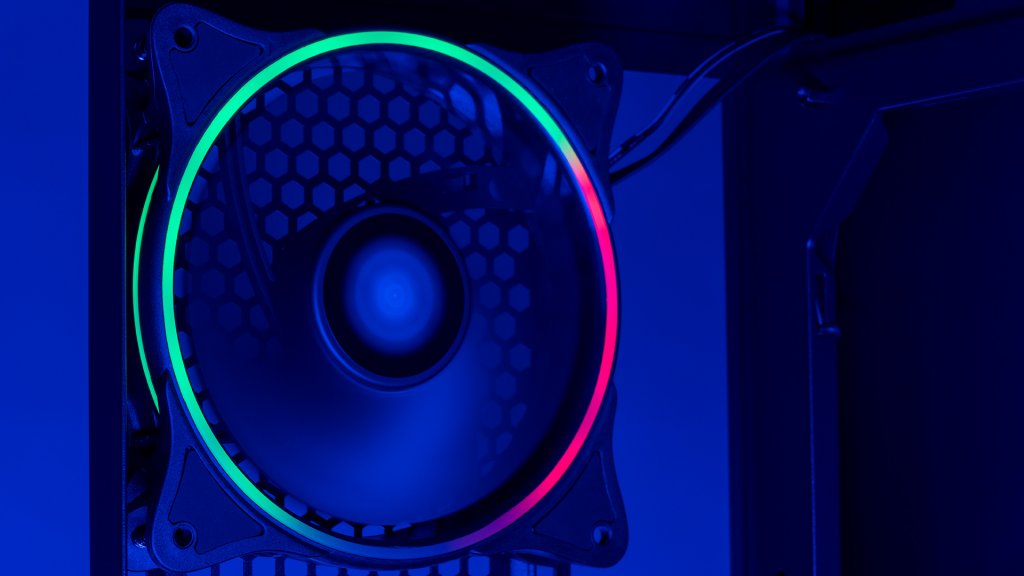 If you’re kitting out your gaming rig with all that RGB gear, you’ll need a way to show them off in all their resplendent glory, which is why the left side of the J11 sports a transparent tempered glass panel. Tempered glass is becoming a popular material for manufacturers like darkFlash to integrate into their case designs for its attractive appearance and, perhaps more importantly, its durability. From our time with the case, we can vouch for the fact that the panel (and the rest of the case, which is made of SPCC steel) feels tough and sturdy, and allows RGB lighting to shine through in all its colorful glory. 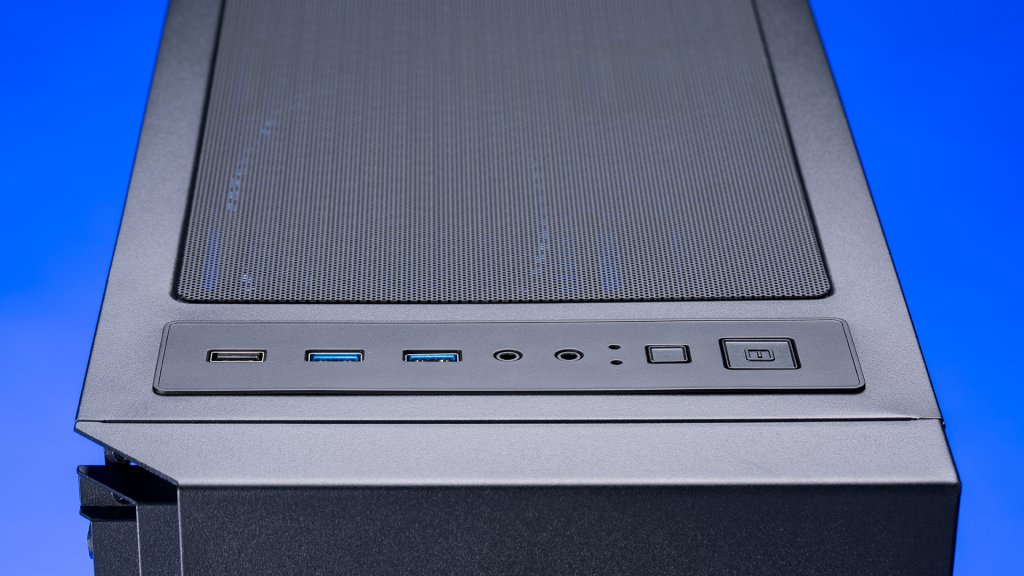 At the top of the J11, you’ll find the I/O ports: two USB 3.0 ports, one USB 2.0, 3.5mm microphone and headset jacks, and the power button. To the left of the power button is what at first glance seems like a reset button, but is actually an RGB switch for toggling between the case’s fifteen lighting modes. Behind the I/O ports is the magnetic dustproof cover, a mesh surface that works to filter out particles from entering the chassis.

As with the other darkFlash products we’ve had a chance to build with, we were wowed by the vivid color options of the J11 case. The fact that it packs in other smart features like easy cable management and a tempered glass panel was just icing on the cake. But the J11 wasn’t the only darkFlash component we built with; we still have to talk about the L6 Cooler. 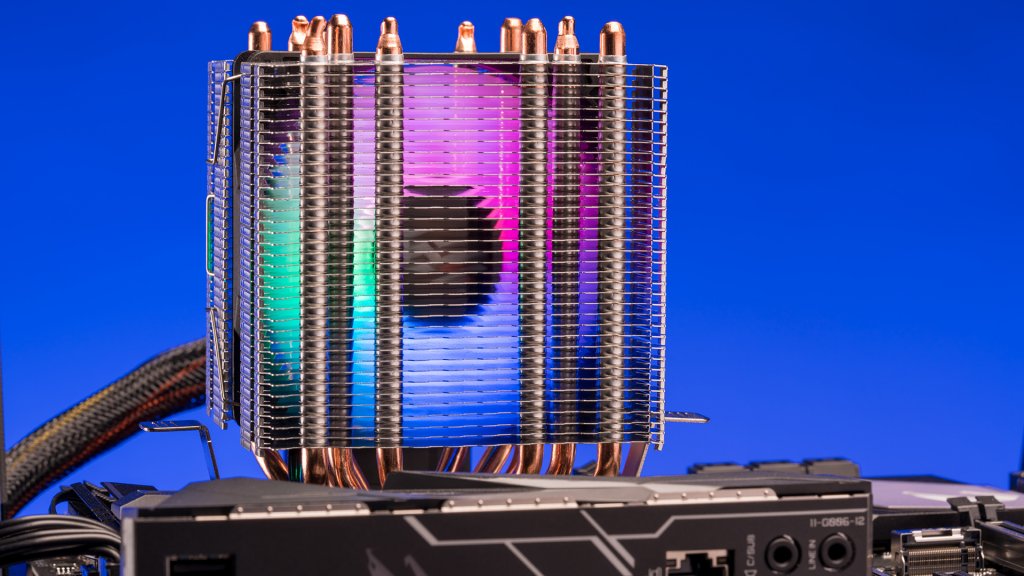 Since we threw an overclockable CPU in our build, we needed a cooling solution that would let us push our processor to near-breaking point. That solution was the aforementioned darkFlash L6 Dual-Tower CPU Cooler. This CPU cooler is composed of one four-color fan situated between two finned towers. Surrounding the cooler are six copper heat pipes, which terminate in a copper base with a wide contact area for optimal thermal conductivity.

While the L6 cooler is as beautiful as darkFlash’s other components, we were a bit disappointed to discover that it doesn’t support any sort of RGB sync technologies or other lighting modes. However, any minor quibbles we had with the L6 doesn’t take away from its strengths, which are plentiful. For one, the main reason the lack of color sync options stung was because the color reproduction, as usual for darkFlash components, is gorgeous, shining brilliantly through the fins of the dual towers.

Speaking of those dual towers, that very design is what  makes the L6 is a solid cooler. By positioning the fan between the two towers, the L6 is able to more efficiently push and pull air through the fan as it passes through the towers’ super-dense fins. In action, this made for quiet cooling even when overclocking.

In regards to installation, we couldn’t have been happier about how easy it was to build with the L6. Mounting the included bracket and the block itself is all toolless, making setup quick and painless.

Another Flash of Brilliance 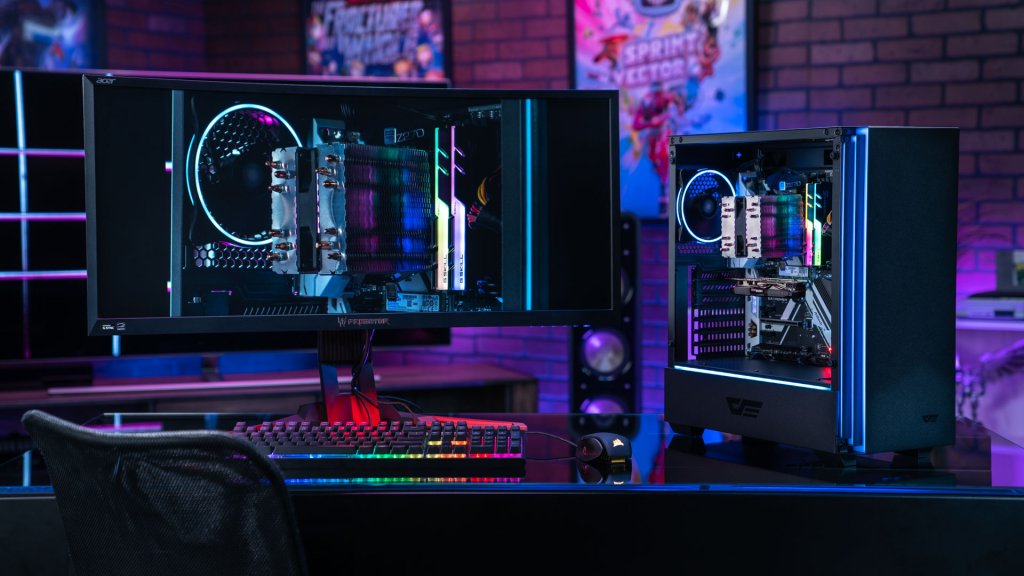 At this point, it should be pretty clear that we feel darkFlash’s components are in rarified company as far as RGB lighting goes. The color reproduction found on the J11 Case and L6 CPU Cooler more than live up to the beautiful bar set by the other darkFlash parts we’ve tested and built with. Whether you’re looking to put together a basic budget build or a high-powered gaming battlestation, darkFlash components should be on your radar.

Products Used in this Build: