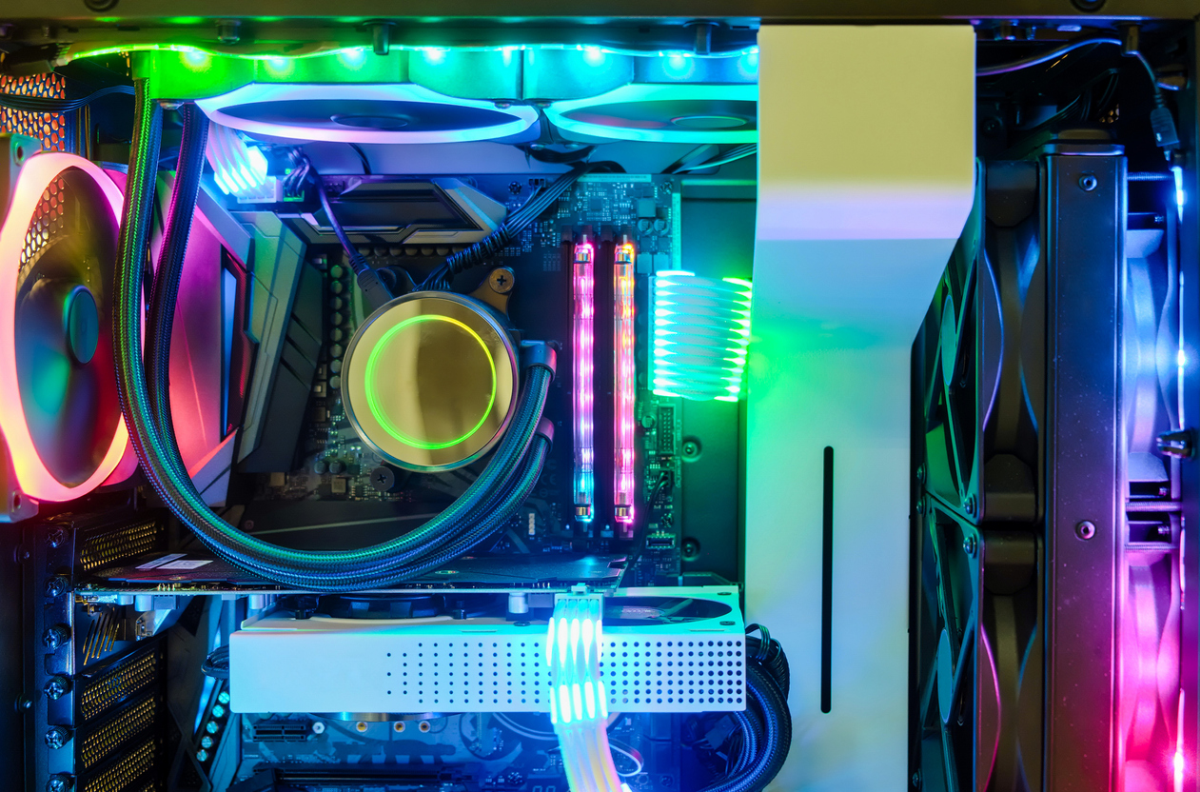 By Wallace ChuSeptember 30, 2021No Comments 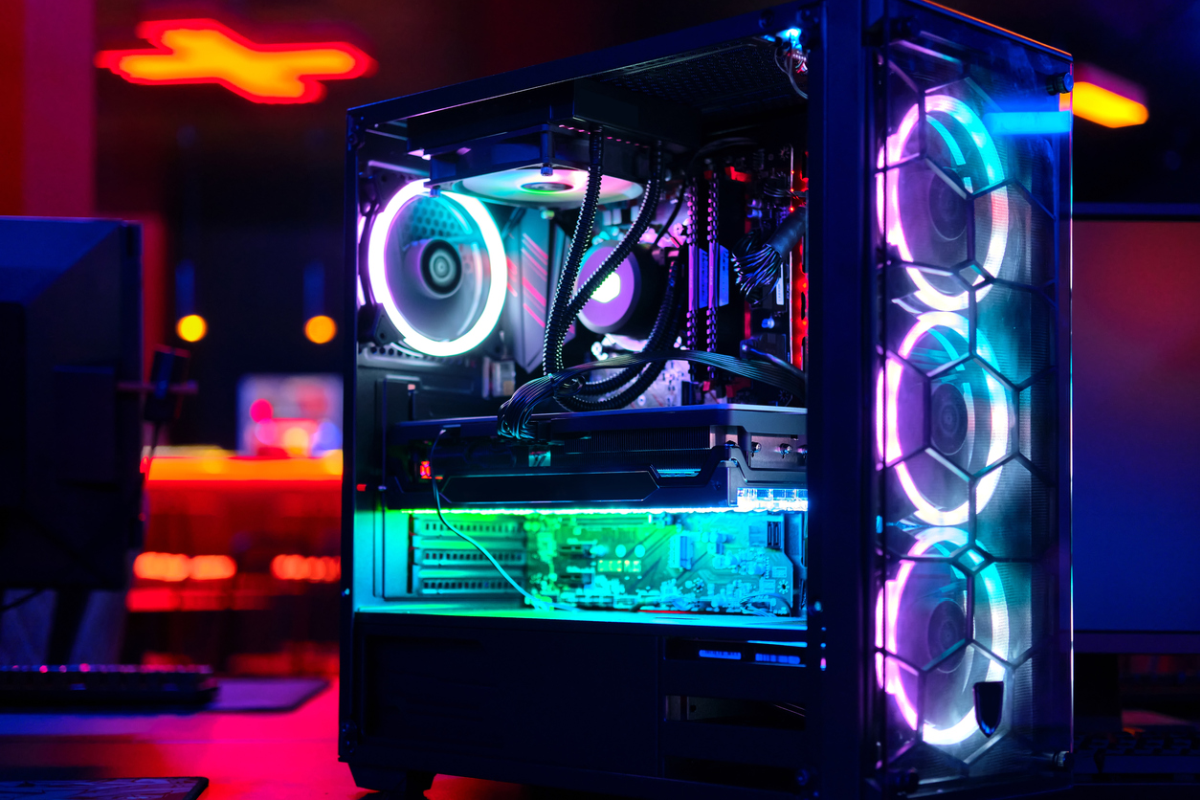 Traditionally, Newegg customers tended to build their own computers rather than buying prebuilt gaming PCs. But parts scarcities over the last year made purchasing the latest components more difficult. As a result, prebuilt gaming PCs became an increasingly popular option for those looking to skip the queues and get right into PC gaming.

Related: Should You Build or Buy Your Kid’s First Gaming PC?

A prebuilt desktop computer offers an alternative route to getting a highly sought-after GeForce RTX or Radeon RX video card. But when it comes to choose a prebuilt gaming PC, it can take time sifting through offerings to find the best bang-for-buck deals. To help, we’ve rounded up several systems from the top builders so that you can skip the wait for a gaming PC. 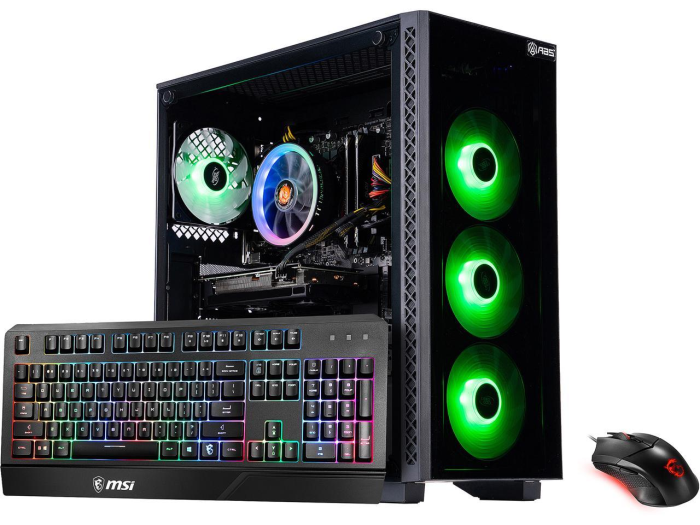 When I left you I was but a learner, now I ABS Master

This ABS prebuilt gaming PC is geared out almost perfectly as an entry level machine that will handle 1440p gaming with ease. It includes the basic peripherals you need to get started, such as an MSI GK20 gaming keyboard and MSI GM08 mouse. All you need to complete the system is a monitor. We’d recommend a 1440p screen to fully take advantage of the RTX 3060.

One of the top motherboard manufacturers in the world, ASUS has been operating since 1989. They started by offering 386 and 486 motherboards for IBM systems, and now ASUS continues to manufacture motherboards for both Intel and AMD-based builds to this day. Their Republic of Gamers brand caters specifically to the needs of gamers, and can be found on motherboards, laptops, desktops, video cards, and even Gundam-themed routers. A ROG laptop or desktop will typically include gaming-focused hardware, such as dedicated GeForce and Radeon discrete video cards instead of onboard graphics. 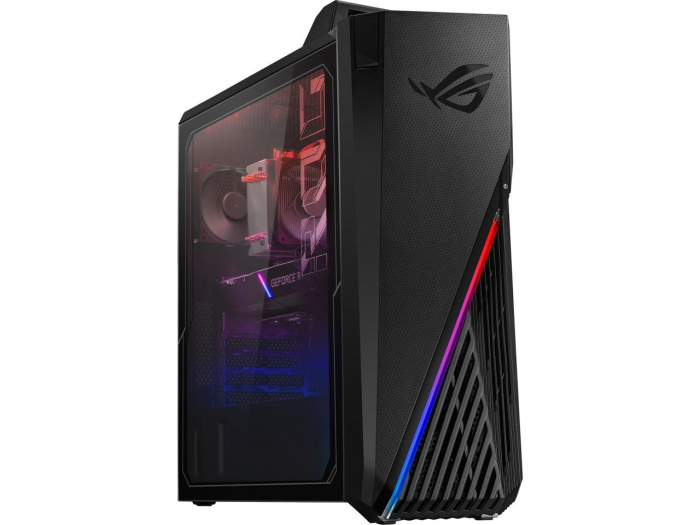 Send you adversaries Strix feet under

This ROG desktop comes with an RTX 3070, which should be able to handle any 1440p gaming and some titles at 4K. However at 4K, a 60 fps experience is not guaranteed and settings may need to be lowered for some titles. 1440p gaming at a stable 60Hz or even 120Hz is well within the system’s capabilities. Those concerned about storage space can rest assured that it comes with a 512GB SSD as a primary drive as well as a large capacity 1TB hard drive.

Based in Des Moines, Iowa, Cobratype is a system builder that designs and assembles gaming desktops. They offer their own warranties, so any issues you may have can be solved by contacting them directly instead of the parts manufacturers. 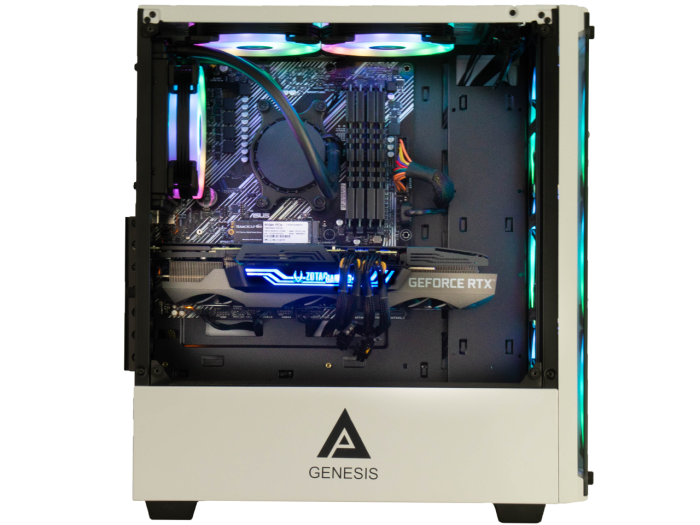 Those that must absolutely have an RTX 3090 in their build but don’t want to completely blow their budget may want to consider the Cobratype Taipan as configured here. Not only does it come with an RTX 3090, it includes an Intel i7 10700F and a large capacity 1TB NVMe SSD. This prebuilt system should do well as a productivity machine in addition to any gaming loads. Expect it to easily handle 4K gaming on top of productivity work.

A well-established PC builder and system integrator with over 20 years of experience, CyberPowerPC offers gaming-oriented desktops and laptops. One advantage of choosing a CyberPowerPC desktop is that instead of an off-the-shelf case, some of their systems come bundled with in-house chassis that can’t be found outside of their prebuilt systems.

If a 3090 is overkill for your needs, the CyberPower PC Gamer Xtreme C768LQ comes with an RTX 3080 and plenty of storage space. Benchmarks show the RTX 3080 is a solid performer when it comes to 4k gaming, able to hit or exceed 60 fps. The 500GB NVMe storage should be more than enough for most gamers while the 1TB hard drive provides plenty of space for media.

Dell’s Alienware brand of gaming-focused PCs have been around for decades and offers premium desktops and laptops. Alienware also offers keyboards, mice, and headsets designed specifically for gamers and streamers. But for the ultimate gaming performance, be sure to check out their gaming monitors, as they often pack features such as incredibly fast response times and refresh rates. Choosing an Alienware desktop also means you get an exclusive case not offered anywhere else. 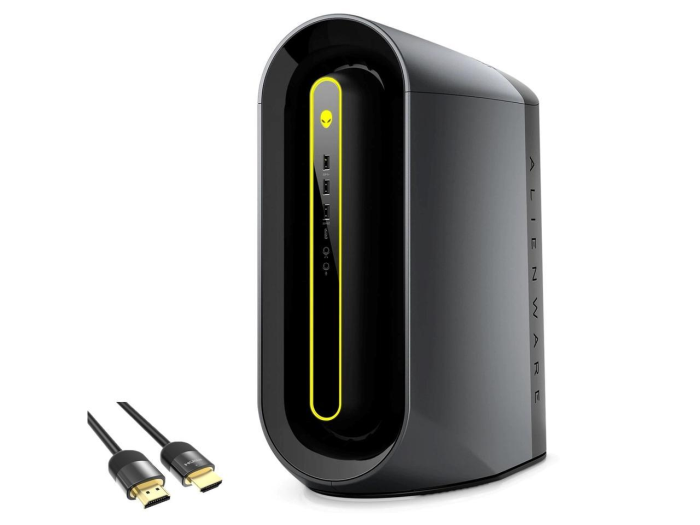 Have you seen the Alien there?

Those looking for a desktop gaming PC resembling a Dyson fan need look no further. The Alienware Aurora R10 configured above comes with a Ryzen 5 5600X, which more than enough performance for gaming. The 256GB primary SSD should be more than enough for Windows and several games while the 2TB of hard drive space should be enough for media.

One of the oldest companies on this list, Hewlett-Packard traces its founding back to 1939 with founders Bill Hewlett and David Packard. If you are a PC gamer and were born in the 80s, there’s a good chance that your first computer was an HP desktop. Today, HP has their Omen gaming brand, which like Dell’s Alienware offers gaming peripherals and accessories. 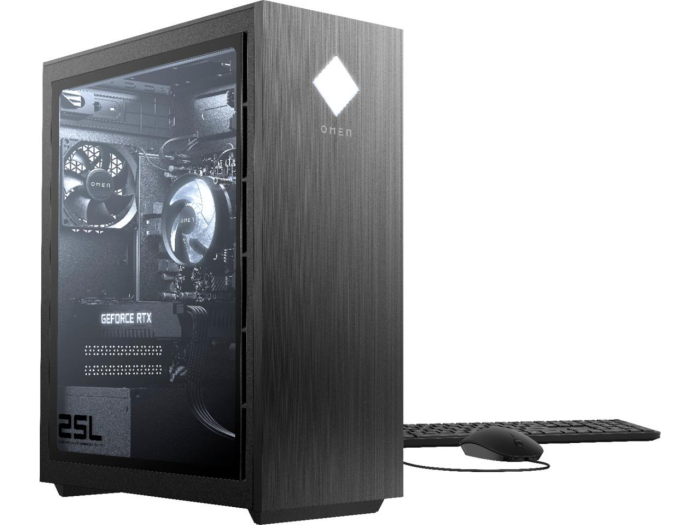 The future doesn’t look good, for your opponents

Founded in the late 90s, iBUYPOWER focuses solely on gaming PCs and offers both desktop and laptop systems. In addition to their prebuilt systems, they also offer custom building options if you can’t find the exact spec you want. However, their prebuilt PCs cover a large range of needs and price points. 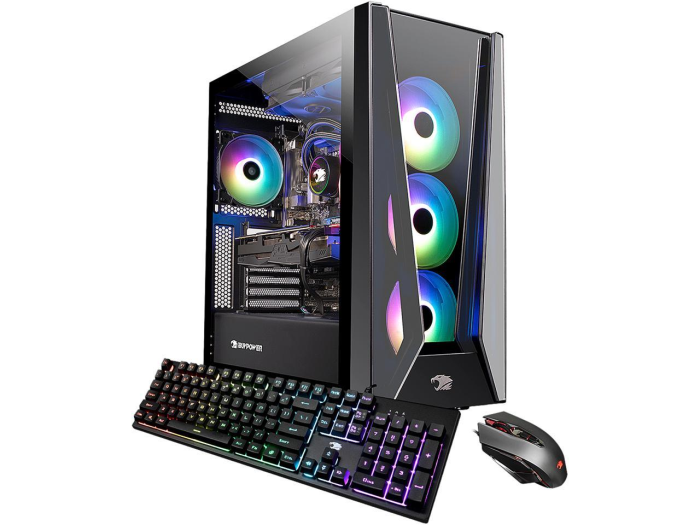 The iBUYPOWER Trace5MR configured above differs from the rest of the ones listed above due to its Radeon RX 6900 XT video card. On top of that, it comes with 32 GB of DDR4 RAM, which should be plenty for content creators and streamers in addition to gamers.

Not familiar with the name MEK HERO? You might be more familiar with their other name, Zotac. Launched in July of 2021, MEK HERO is Zotac’s line of prebuilt gaming desktops that combine Ryzen processors with RTX 3070 and 3060 video cards. In addition, Zotac partnered with EKWB for an AIO liquid cooling solution that should offer some overclocking headroom. The initial launch includes two models, both sold exclusively by Newegg. 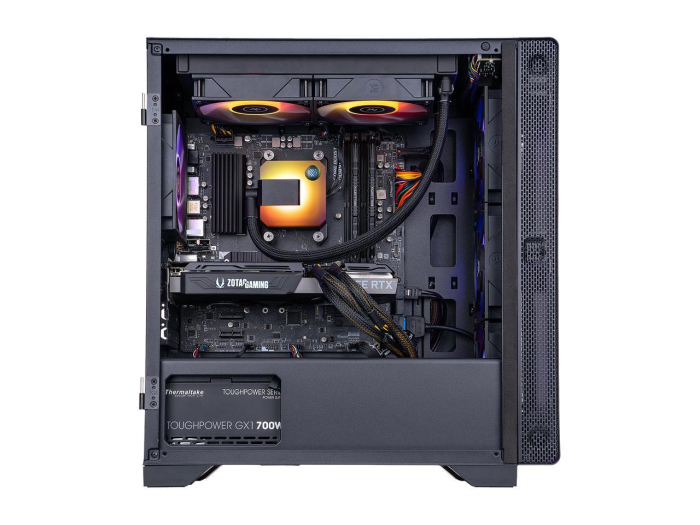 Built around a Ryzen 7 5800X and GeForce RTX 3070, the MEK HERO G1 offers superb value for 1440p and 4K gaming. Storage is handled by a 1TB SSD and 1TB HDD, making the MEK HERO G1 also one of the top choices when it comes to storage speed and capacity. If you’re looking to overclock, the EKWB AIO cooler should provide plenty of overclocking potential.

Make sure you can be heard with a Gaming Headset

Like ASUS, NZXT originally started off as a components, cases, and peripherals manufacturer. Prior to their gaming desktops, their cases stood out as being some of the best to build in for custom builders. Now, you can choose to either buy a prebuilt from them or customize your system. They’ve also expanded into the motherboard market in recent years, offering options for both Intel and AMD chipsets. 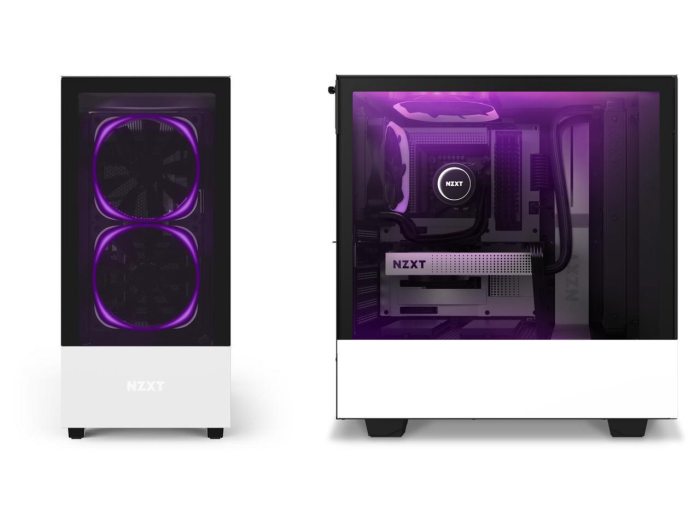 Built around the Elite 510 case, this liquid cooled system comes with a 10th generation Intel Core i7 processor and RTX 3070 video card. If you’ve always wanted to build in an H510 Elite case, this may be your answer to finally getting an elusive RTX video card.

Headquartered in Southern California, Skytech Gaming designs and builds all their systems in the USA. Some of their prebuilt and customizable systems utilize their own case designs, so a prebuilt is your only option if you want one. 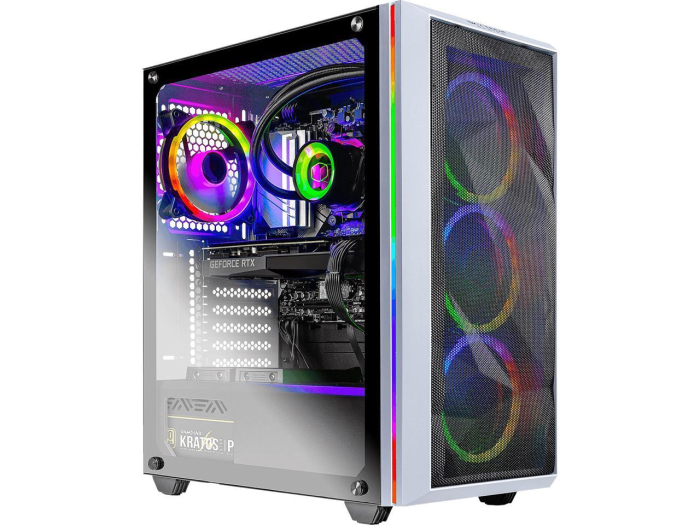 The Skytech Chronos Ryzen 7 5800X desktop as configured offers plenty of gaming performance and overhead for overlocking thanks to the bundled 360mm AIO cooler. If you’re a fan of RGB aesthetics, The Chronos includes 4 RGB fans and an RGB AIO pump.

Looking to build your own system but don’t want to deal with waiting for a video card or pay for more than you need? Consider using the Newegg’s in-house Custom PC Builder tool to purchase all your parts and have it all assembled for only $99. All components can be hand-selected by you, from the CPU and motherboard down to the case and CPU cooler.

We’ve got all the gear a gamer needs at Newegg