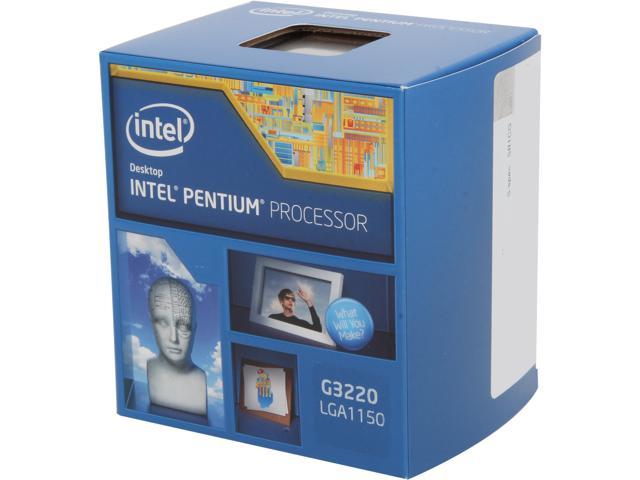 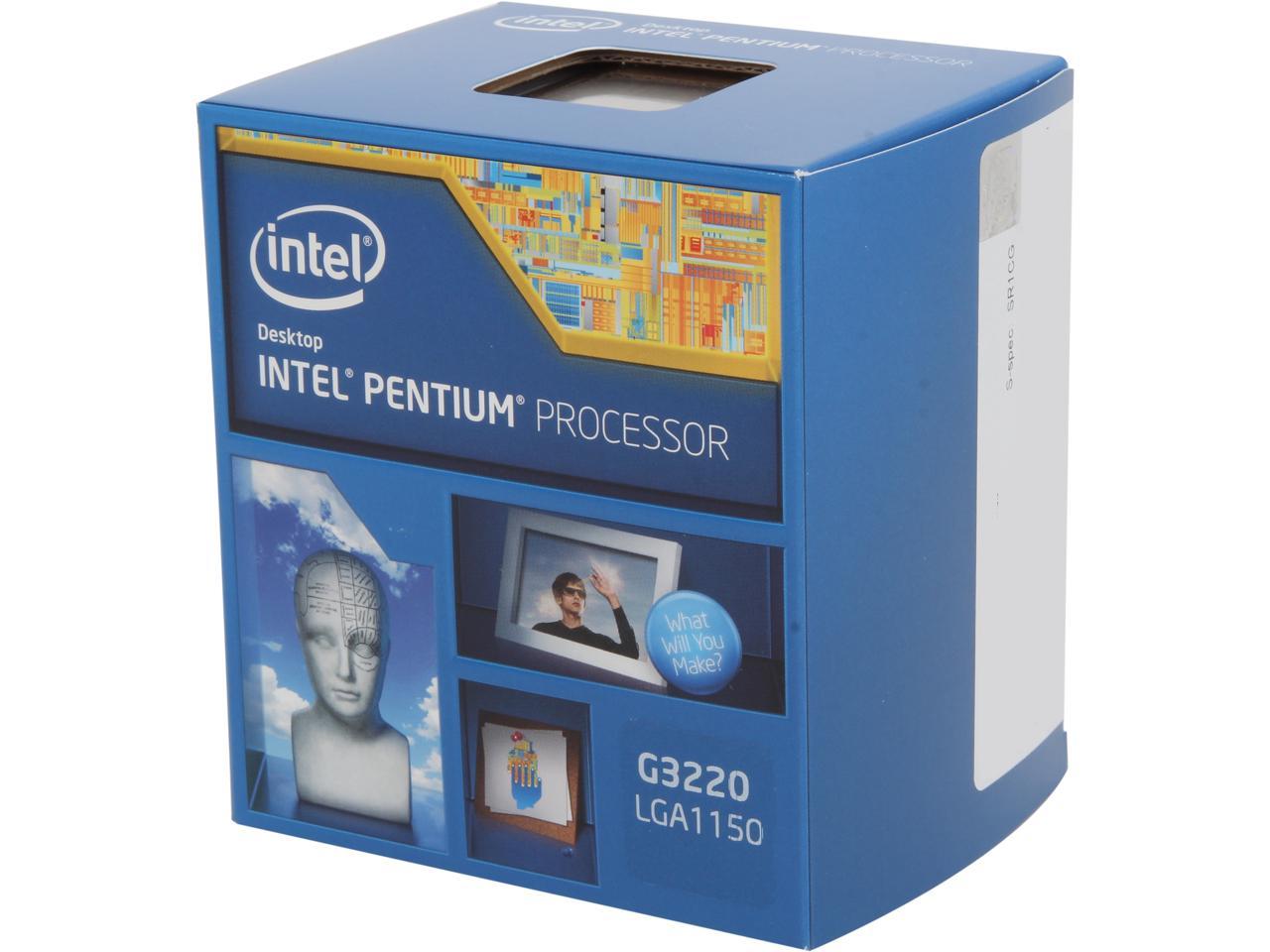 Learn more about the Pentium G3220

Carlos A.
Ownership: 1 week to 1 month

Cons: OC'ing is out of the question

Overall Review: I purchased this for a friends build on a budget and needless to say I am surprised on how well it performs. Its not a Core i3 or Core i5 and while it doesn't perform as well in intensive programs like Cinebench R15 and the x264 HD Video encoding its an amazing value for average daily use. Where it really shines and blew me away was in gaming. As I said I purchased this for a friends budget build with the intention of later upgrading to a Core i5 when he could afford a Core i5. Its paired with a EVGA GTX 760 and the truth is I thought it would bottleneck a little but I don't notice any difference between this and my personal Core i5-2500 and GTX 760. I actually went back and benchmarked a couple of games like Bioshock Infinite, Sleeping Dogs and Tomb Raider. I was expecting a much bigger gap but instead was pleasantly surprised to see that my system and his are within 7fps of each other on those games. I can't say enough about how impressed I am with this chip. It stays cool and the stock cooler is actually pretty quiet this time around. I am assuming the fact this CPU doesn't get hot sort of negates the need for a large heatsink. I was going to go with an AMD APU but decided to go this route instead last minute and I am glad I did. This is a solid choice for an everyday family PC, office PC and an exceptional budget gaming CPU that could last you for a while until you decide to upgrade...if that upgrade is even needed. My build: Core i5-2500 (non K), 8GB Gskill 1600, EVGA GTX 760, 1TB Hitachi HDD. His build: Intel G3220, 8 GB Team Elite 1333, EVGA GTX 760, 1TB Seagate HDD

8 out of 8 people found this review helpful. Did you?
Anonymous
Ownership: 1 week to 1 month

Pros: I'm an AMD dude but my four core richland apu runs a little too hot and is overkill for basic media consumption. I wanted something cooler and quieter. An HTPC type of computer to watch mostly HD sports hooked up to an LED tv. I was about to order the celeron but saw the L2 cache on this was 3MB for about $10 more. Quadcore Haswell is a bit too much to pay for my barebottom needs in this build. Plugged this into an Asrock board. It runs cool and quiet. Windows 8.1 didn't have a problem with it. Comes with a sufficient heatsink, but I don't do any first person shooter gaming on this. Intel drivers are good and efficient. Easy to install.

Overall Review: If I played Call of Duty or bitcoined, I'd probably upgrade the heatsink.

2 out of 2 people found this review helpful. Did you?
Anna H.
Ownership: 1 month to 1 year

Cons: 1. The stock cooler wiring loom was pulled tight enough that the fan would not spin.

Overall Review: I purchased this for a HTPC with a 97 series chipset. I want to replace it with broadwell cpu later. This works very well. It runs cool. Like I said the cooling fan would not spin. It took me a while to figure it out, and it ran without a problem.

2 out of 2 people found this review helpful. Did you?
Robbin N.
Ownership: 1 week to 1 month

Overall Review: This processor demolishes my triple core Rana 440 which I purchased some 4 years ago for about 1.5 times the cost of this. While I bought this as a placeholder while funds accumulate for a 4770k I am very impressed with its performance.

1 out of 1 people found this review helpful. Did you?
Paul S.
Ownership: 1 day to 1 week

Pros: Fast delivery. Low priced, powerful CPU that is being used in a new build for a customer.

Cons: There are no cons.

Overall Review: Used this for a new build for a customer. With the 120 gb SSD and 4 gb of DDR3 RAM, Windows starts in 9 seconds to the desktop! All apps pop open so fast, they can hardly get out of their own way.

Pros: Cheap, fast, best deal on the market for budget gaming and general productivity. The minuscule benefit you get with hyper threading on i3's is not worth the near 100% relative price hike. I mainly play CS:GO and Starcraft 2, and it destroys both games.

Overall Review: Get a decent $50 mobo, cheap ram, and an ok videocard (HD7700), and you will be able to play every game on the market very, very smoothly with the settings turned down. Today's low end components are VERY capable and can push very high frames if you just lower the settings. If you care about visuals, and cranking up the physics, then get an i5 and HD7970. At this price, there is no reason to get an i3. Get a Pentium, or an i5.

Pros: - Price to Performance ratio is Outstanding! - Power Consumption & Thermal Output are quite low - Intel's got a really good answer to most of AMD's offerings in the price range - Mulit-Tasking is better than most would expect - Barely breaks 40C with any descent tower cooler. - System idles at 15W with an SSD and a Bronze 80+ PSU.

Cons: - Only Supports 1333mhz RAM speed, but honestly, it's not a huge deal. You can tighten the timings on higher speed RAM to compensate. - Stock cooler is anemic, but sufficient, and keeps the price down. If you want silent, upgrade. - Intel has no inexpensive true quad core options - I wish AMD had something truly comparable. - An i5 is like 2 of these on one die, why does it have to be 3x the price. :(

Overall Review: I have experience with all kinds of processors, considering I have been performing professional computer repair for over a decade. I have grown to love good, efficient, budget chips. The kind you'd want to recommend to the average person. This is the Athlon X2 of its day! Cheap dual core that pairs great with a cheap motherboard, using very little power, and works fine with mild cooling. A perfect multi- purpose chip. However, Intel has really raised the bar with it's 3MB of L3 Cache and a integrated video that is usable! The Sandy Bridge version of this chip was so pricey, it was nearly as much as a Phenom X4 of the time. A matter of tradeoff in that regaurd. The Ivy Bridge version improved this with increase clock speeds, energy efficiency, and lowered cost. This version takes it to perfection, IMHO, especially with it's extremely low idle speeds! So what's the competition these days in this price range? AMD A4-A6? No thanks! As much as I used to love AMD offerings, these are glorified Single Core chips at high clock speeds. While they may have a descent idle power consumption showing, they use far to much power at max! Considering for the same price, you get the Pentium, I don't see why anyone would do the A4-A6 build. The integrated video is not significantly better to warrant the sacrifices. As much as I used to love and tout AMD offerings, I find them useless in this comparison. A8-A10 offering are far better comparisons, but are priced far and beyond this chip. The newish AMD Kabini chips, such as the 25 watt Athlon 5350 is an interesting comparison. If multi-threaded performance at lowest possible TDP is important, then a Kabini chip may be the way to go. Plus it's a bit cheaper. Priced like a Celeron. Anyways, I think this Pentium hits a perfect sweet spot. The build in video is enough for basic computing, and the chip teams up well with a mid-range video card for a great budget gaming rig! If you gotten this far through my ramble, more power to you!

Cons: Current Video driver needlessly hard to find. Come on Intel, it's not hard to accurately label the video this chips uses so that people can locate the proper driver. "Intel HD Video" is totally unacceptable. Here's the link to the current driver. https://downloadcenter.intel.com/Detail_Desc.aspx?DwnldID=23377

Overall Review: This CPU is perfect for HTPC or NAS use.