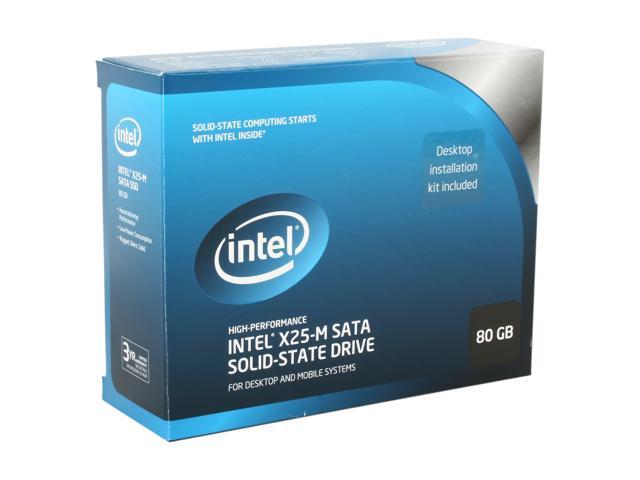 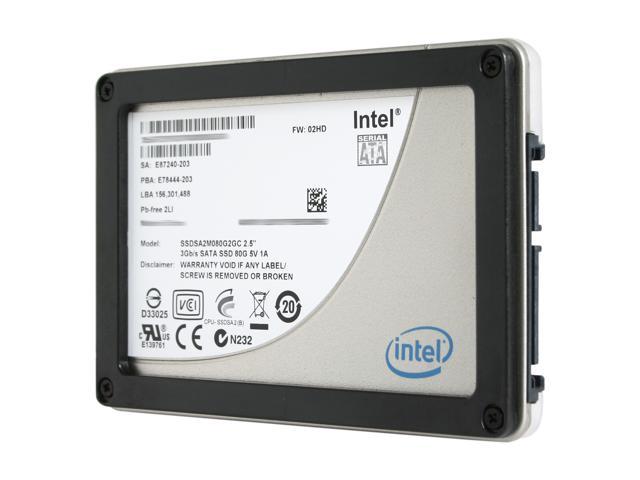 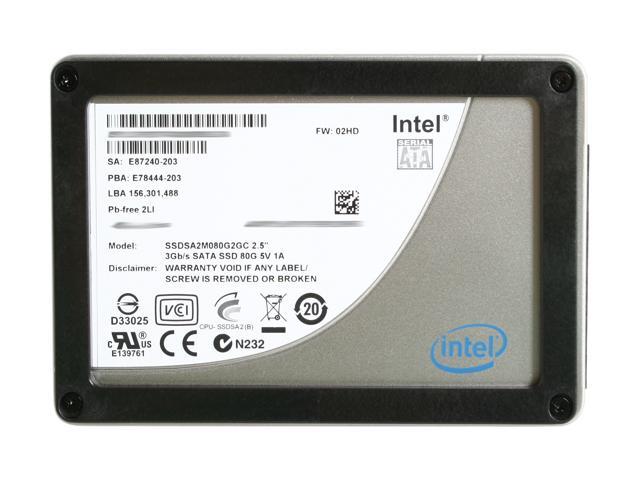 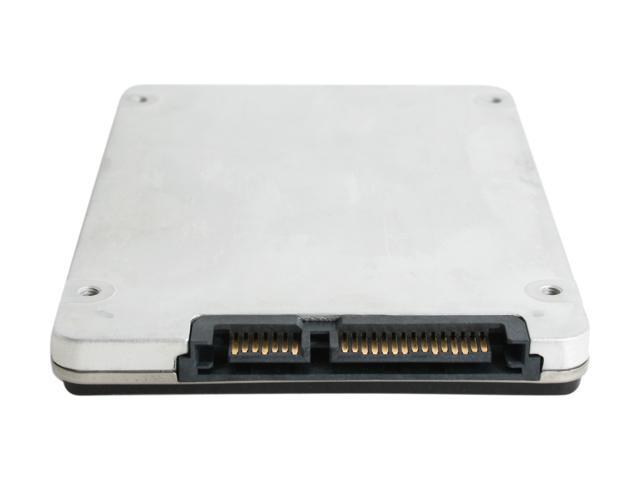 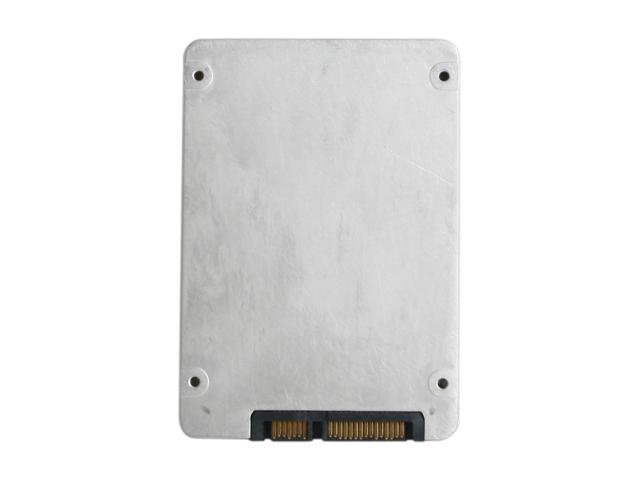 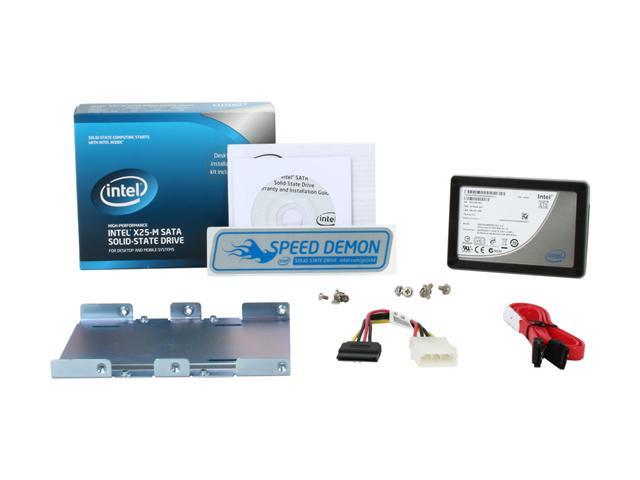 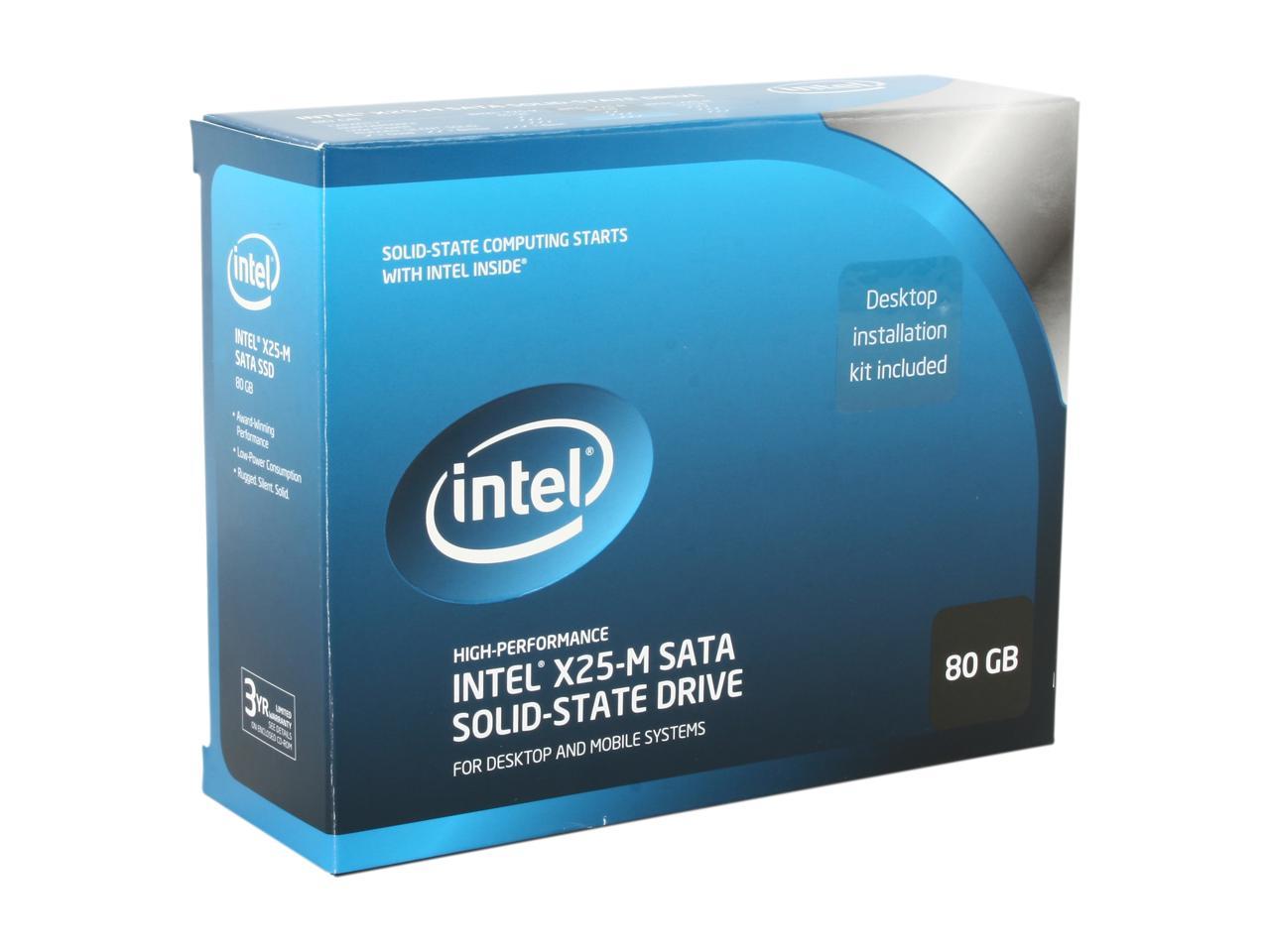 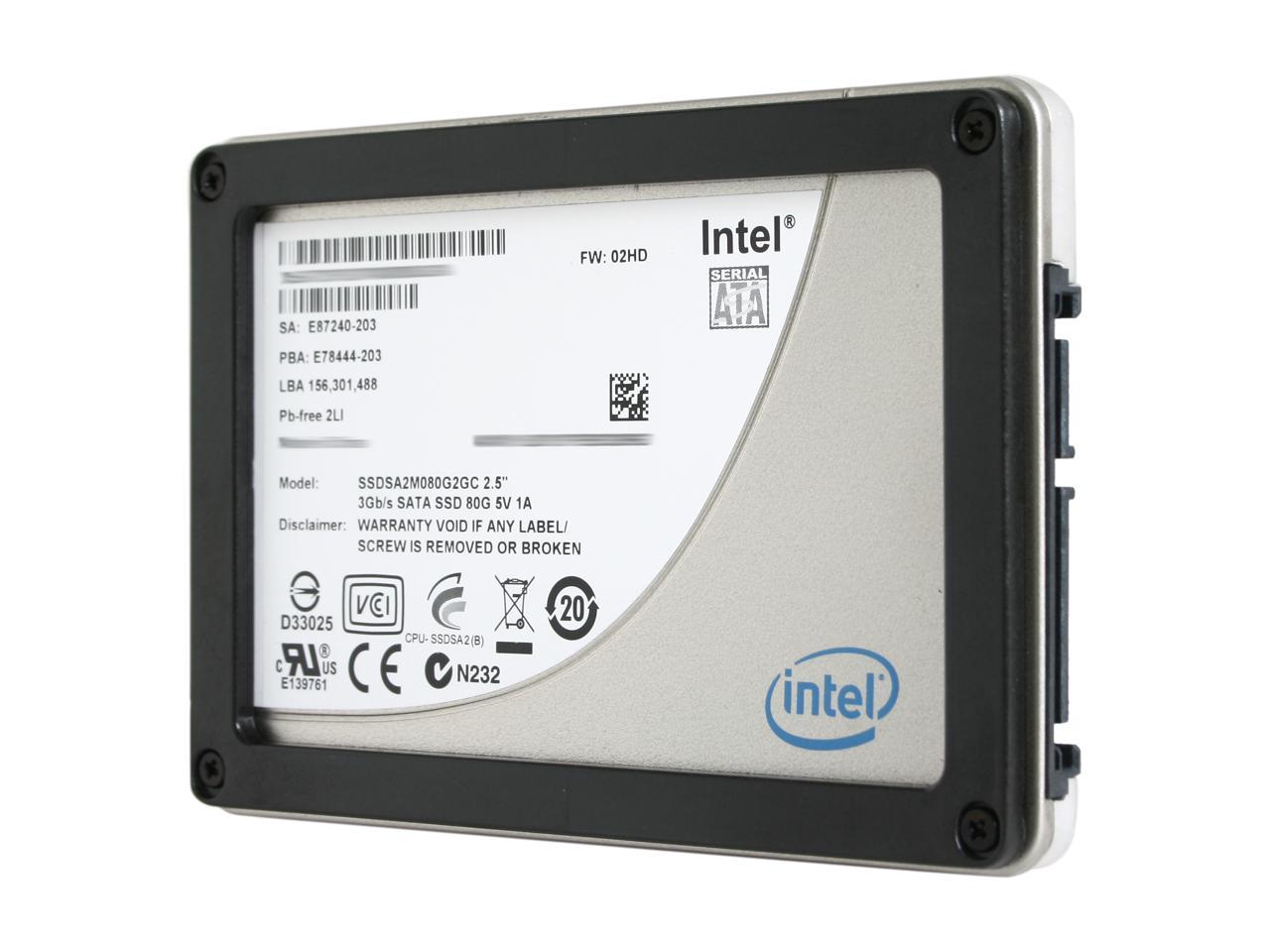 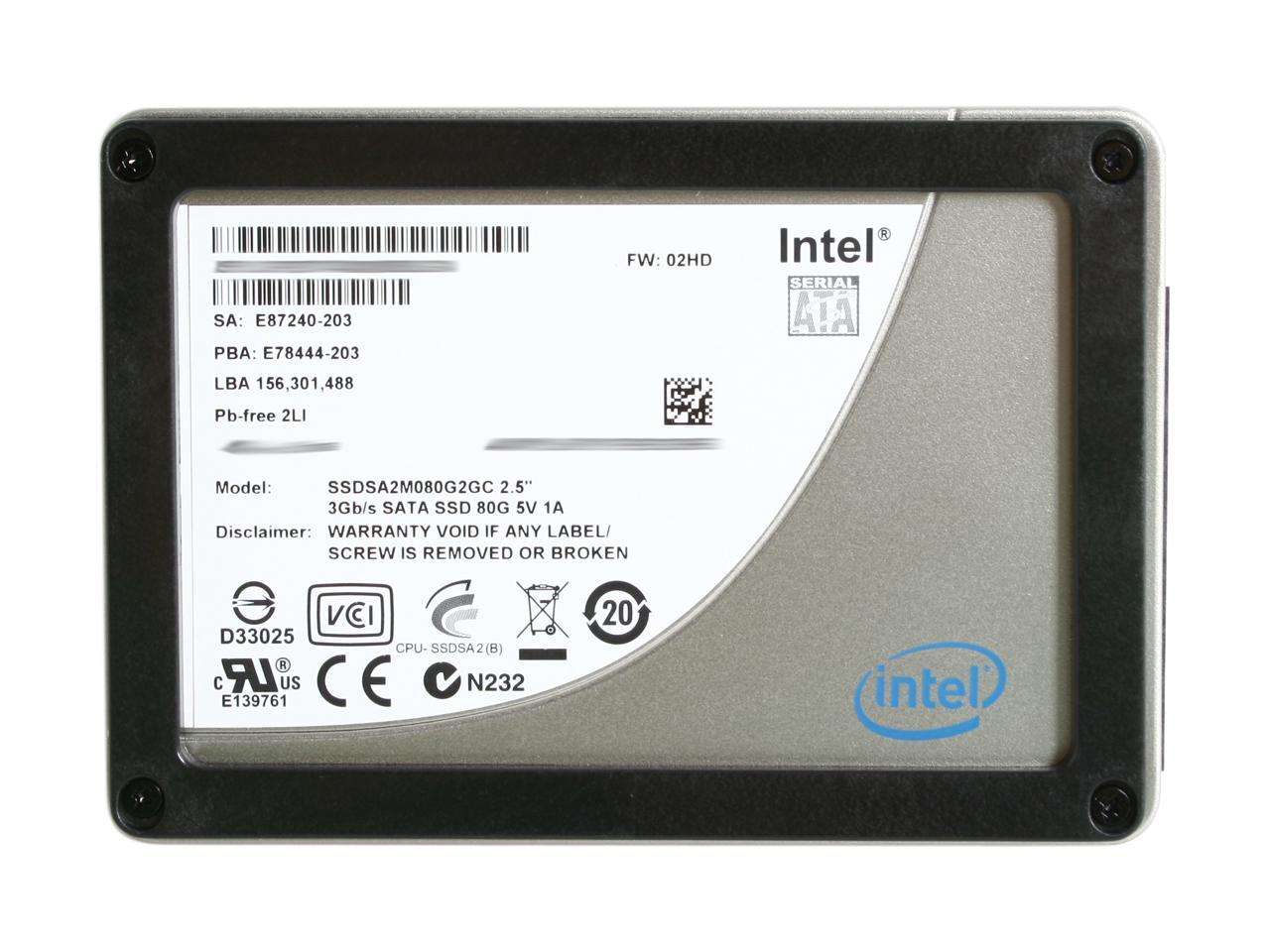 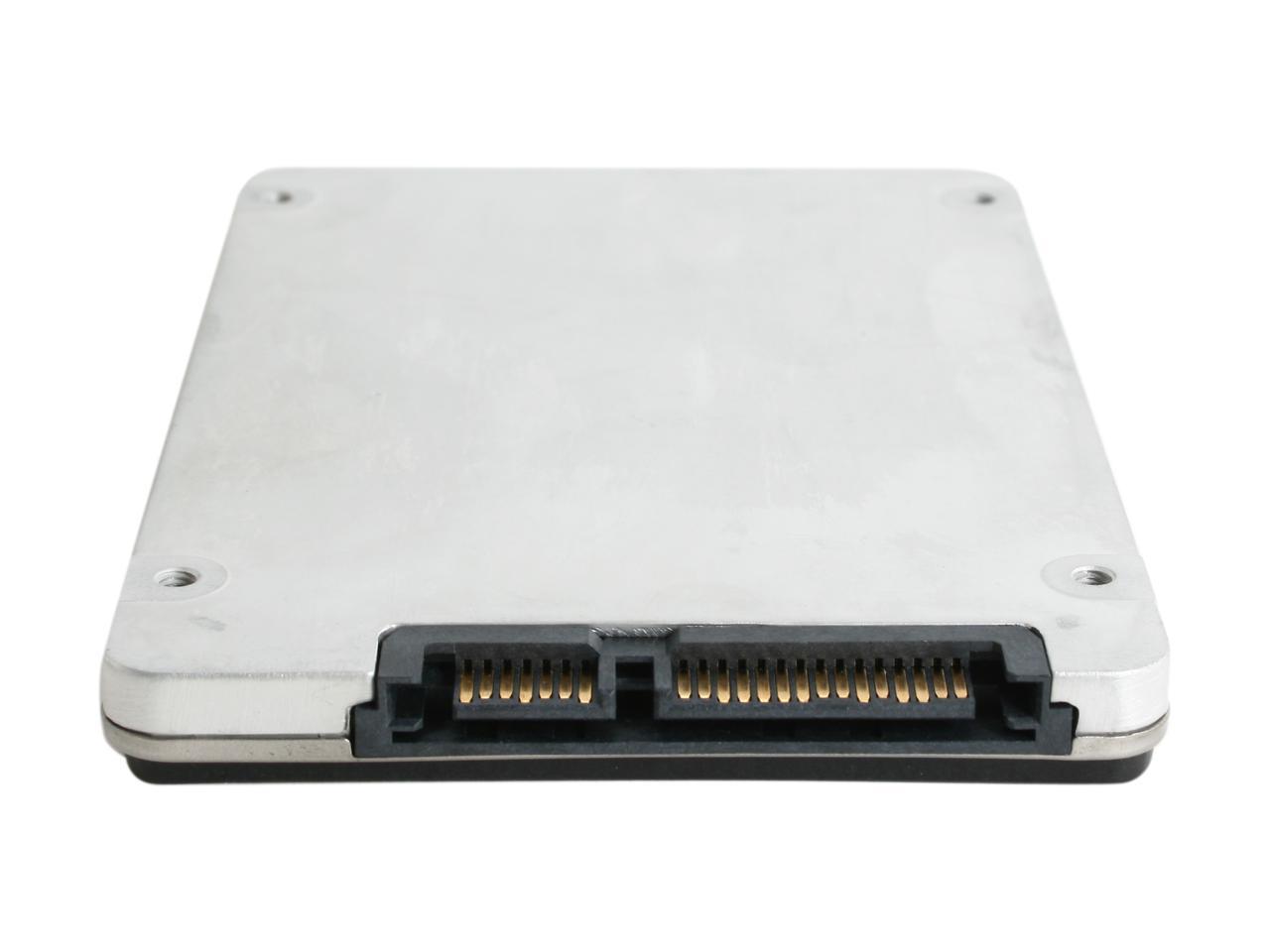 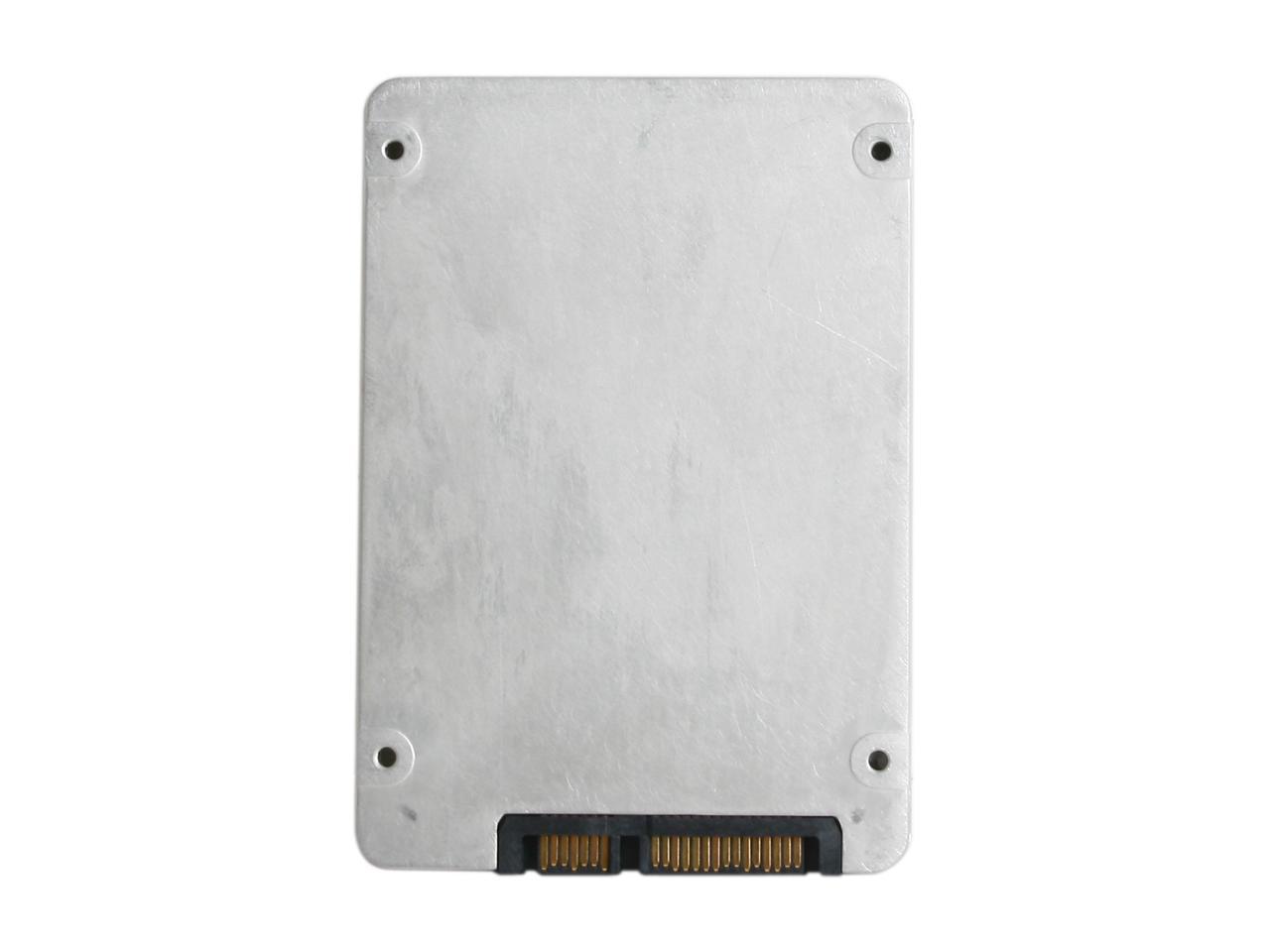 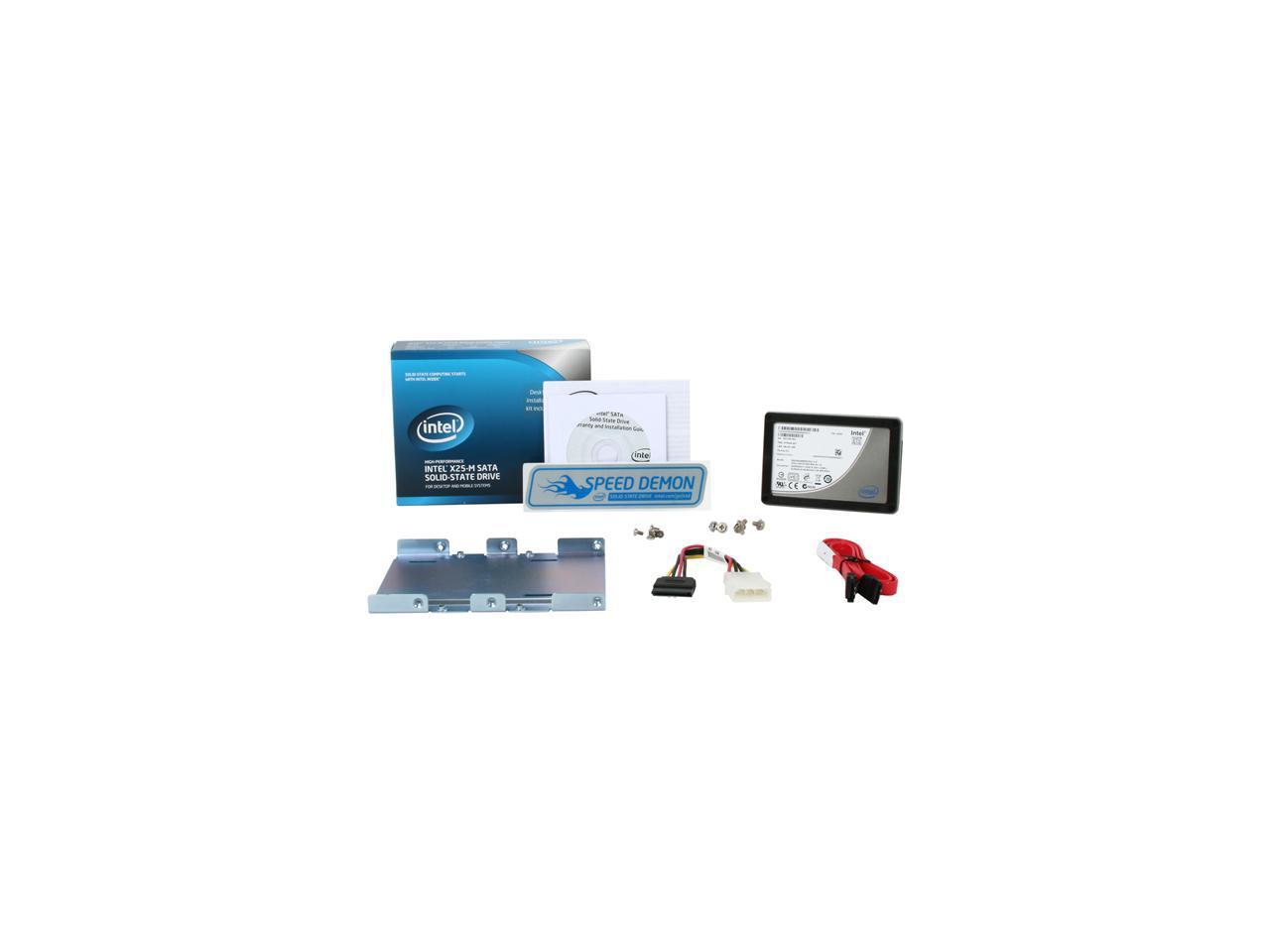 (77) Write a Review
In stock.
Ships from United States.
Most customers receive within 3-7 days.
Overview
Specs
Reviews
The high-performance storage for notebook and desktop PCs, Intel X25-M, is now made on 34nm NAND flash memory featuring the Intel Solid State Drive (Intel SSD) Toolbox. With sustained sequential read speed up to 250MB/s and write speed up to 70MB/s (80GB drive), the Intel X25-M mainstream SSDs are designed to satisfy the most demanding gamers, media creators, and technology enthusiasts. These drives bring a high level of performance and reliability to notebook and desktop PC storage, at a fraction of the cost of the previous generation of Intel SSD products.

Learn more about the Intel SSDSA2MH080G2K5

Pros: This drive is very fast; I benched it at 260/79 mb/s sequential 500mb with CrystalDiskMark x64 before even installing SATA drivers. Wow. The disk is also recognized as 80.17gb raw space, so that's a nice bump too. It runs so cool that as a system drive I still can't tell it's been running by touching it--another name-brand SSD rated for 2w active .5w idle would heat up like a mechanical hard drive. When this one said 150mW active, I was suspicious of the low rating. Temps alone make this very easy to believe after owning one. If you happened to not look at the pictures, it does come with a full length SATA cable, a very heavy, sturdy 3.5" drive adapter and 5 each of drive and case screws (they knew I'd drop one!) Oh, and the boss graphics "Speed Demon."

Cons: It is still very expensive, but not too much above similar capacity drives with poorer review track records

Overall Review: If you are concerned about power consumption or read-benchmark bragging rights, this is the drive for you. Still don't know what I'm going to do with the sticker...it's too big to be a case badge and wouldn't really look nice on anything else...haha Specs: win7x64 gigabyte ga-ma790xt-ud4p 4gb corsair xms3 -ATI- 5750

Pros: Fast as you will need for years but died after 7 months.

Cons: Died after seven months. Intel's RMA is like a black hole. They have yet to acknowledge receipt of the faulty drive after a week. Intel's website and customer service is horrible.

Pros: Clean installed easily with Windows 7 Upgrade (double install method). This is by far the best performance boosting upgrade I have ever done to my laptop.

Cons: Still expensive per GB compared to HD, but if you stick to smaller drives then it's not bad.

Overall Review: Installed on Dell Studio XPS 1340 laptop with 4GB RAM, Intel P8600 at 2.4GHz. Replaced 7200RPM SATA2 HD. Using HD, Win 7 Pro booted in 60 seconds from power-on to stable desktop with no bloatware. Now it's 30 seconds. iTunes, itself a pig, opens to ready state in about 4 seconds vs. 10+ seconds before. Word and Excel 2003 opens in 0.5 seconds, essentially instant. No heat since there's no spinning HD eating power. For Win 7, you should buy at least a 60GB SSD, 80GB (this review) is better as the WinSXS folder can be huge. Plan on carrying an external 2.5" drive for data. My SSD is for OS, apps, and some data. Large content like music, videos, movies, ZIP files, etc. go on the portable HD. It's a killer combo. I used Acronis TrueImage ($) to clone the drive. Worked flawlessly. Cannot comment on Intel's free utility.

Overall Review: With two of these in RAID 0, I easily put up a 7.9 on Windows Experience Index. Solid state hard drives are nice, because you don't have to defragment them all the time and the access times are really fast. Once I'm past my BIOS, my Alienware M17xR2 loads Windows 7 Ultimate in seven seconds. Overall, two of these in RIAD 0 are reading 522 MB/s and writing 162 MB/s.

Pros: It has a decent amount of storage space for the system drive in my media/web server, it just plain works, sturdy 3.5" bracket & premium cables included, nice game promos

Cons: I get annoyed when people complain about the price of SSDs in this section. They're still expensive, so deal with it (read: quit whining) or buy the traditional type of hdd.

Overall Review: I followed the deals this last holiday season knowing that SSDs would have some good promos and Intel didn't let me down. This one came with a free Steam game of LP2 & also a downloadable one from Ubisoft. The drive itself has been flawless and I really like the hefty 3.5" mounting bracket. So far, it has been perfect and my WEI score went for 5.9 to 7.6, so no complaints there. The intrinsic value for my above-average computing needs far outweighs the money value these drives just haven't reached yet. Excellent package, overall.

Pros: 7.8 in Windows 7 experience index Computer fully reboots in less than 30 seconds Everything loads extremely fast Copying from this to a momentus 7200rpm drive gets speeds from 130-230MB/s

Overall Review: Haven't run any benchmarks on it; its performance more than speaks for itself! I'm using it as my system drive and only installing the programs I use most frequently on it because of the limited space. Even then I still have over 30GB free. I used to have a couple of 7200 scorpio blacks in a raid 0 in my machine, and they don't even compare to the performance of this thing! This is definitely one of the best purchases I've made, and when I decide on a new laptop, this drive is going in it! As a bonus, it was nice getting two free games with this drive :D

Pros: I've had this drive for almost two years. It's served me well and has not been problematic in my Macbook Pro. Speed degradation exists, but that's only because OS X does not support TRIM. The drive is noticeably faster every time I wipe (using Intel's utility) every 6 or so months.

Overall Review: They've since upgraded the SSD line, but this is still a good product in the early years of consumer SSDs.