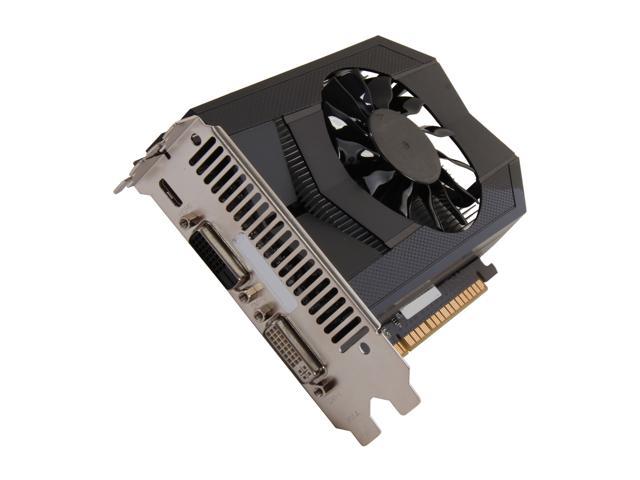 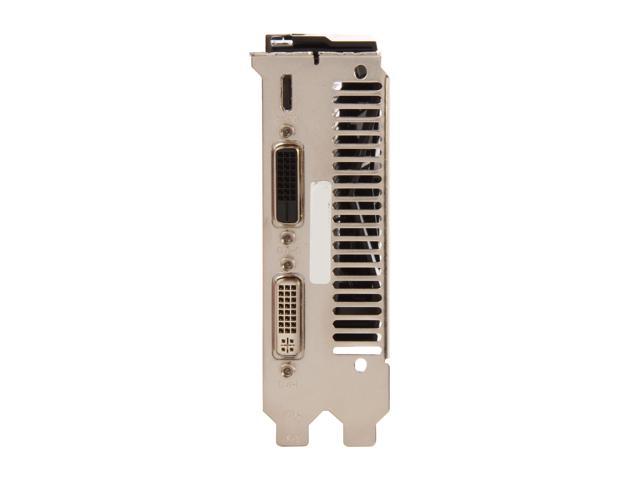 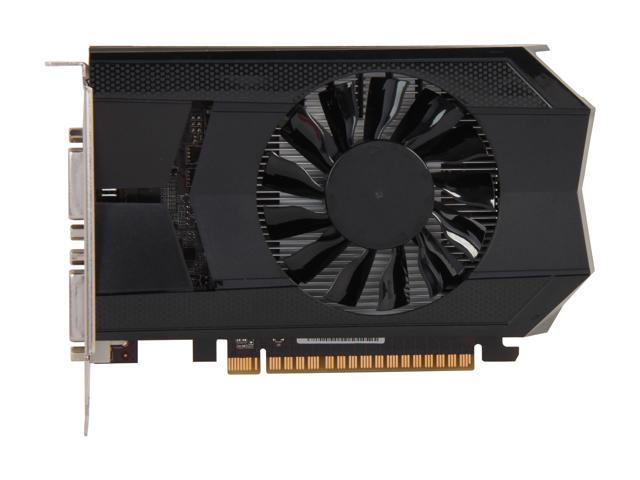 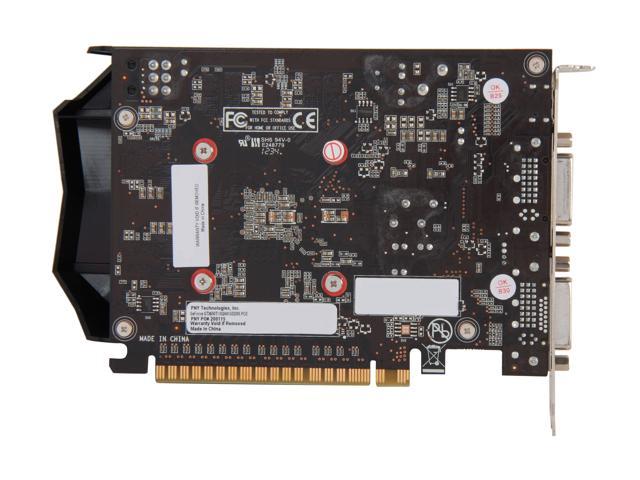 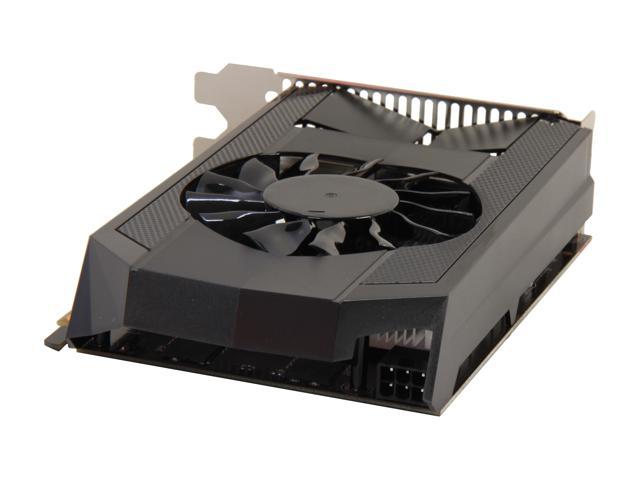 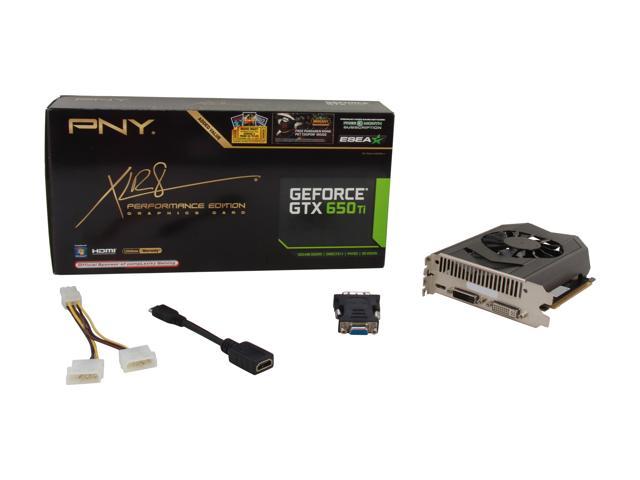 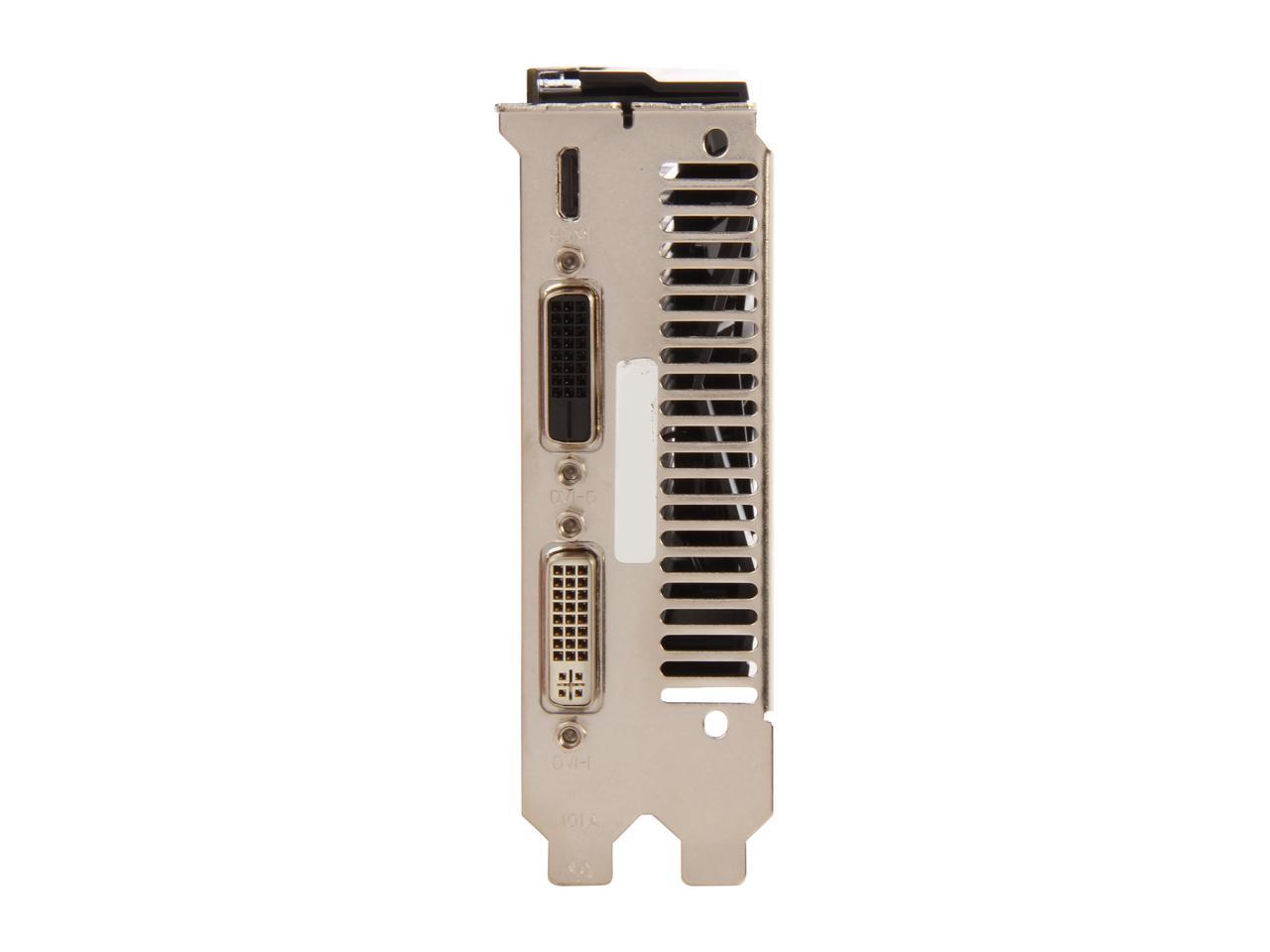 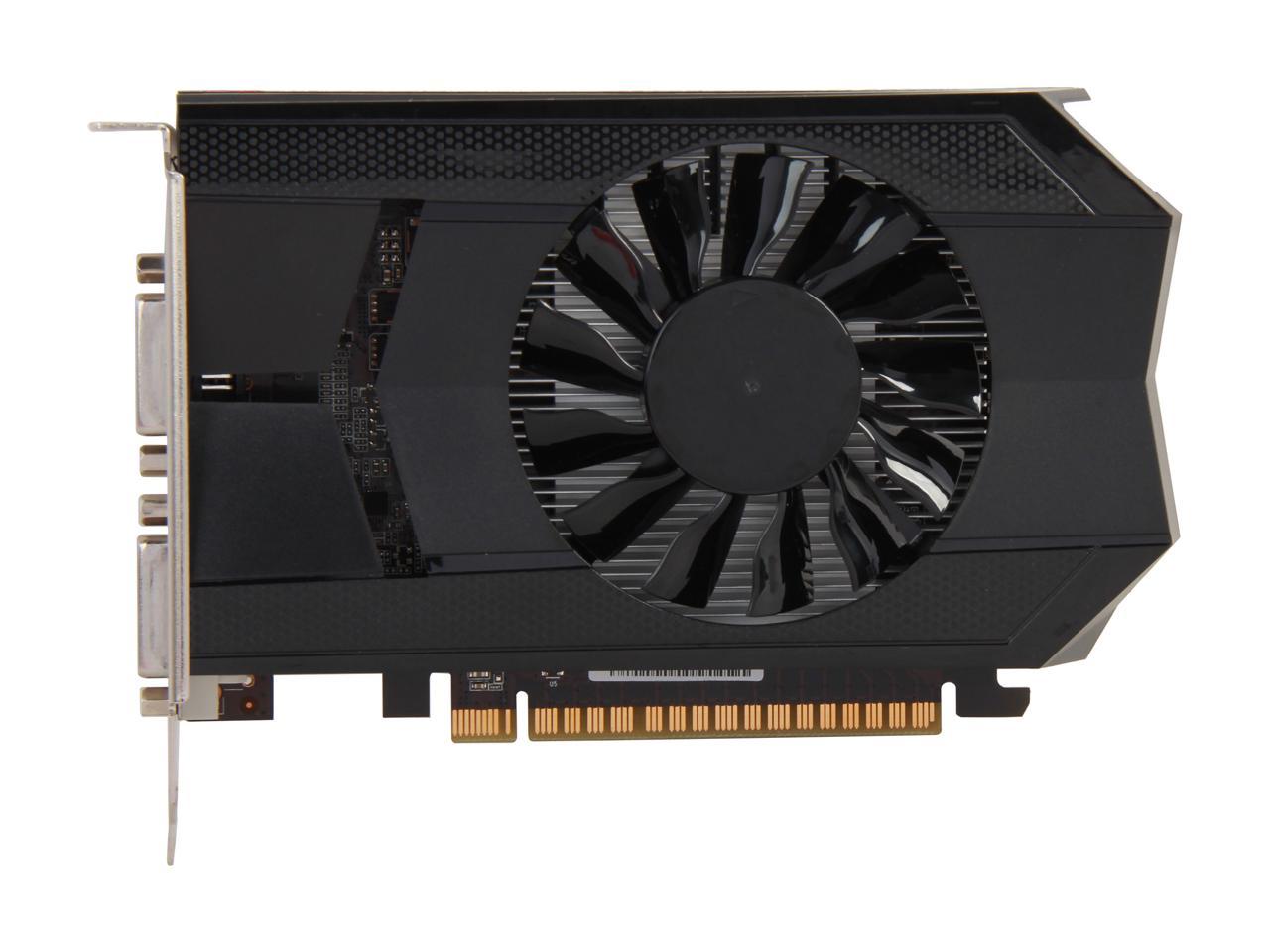 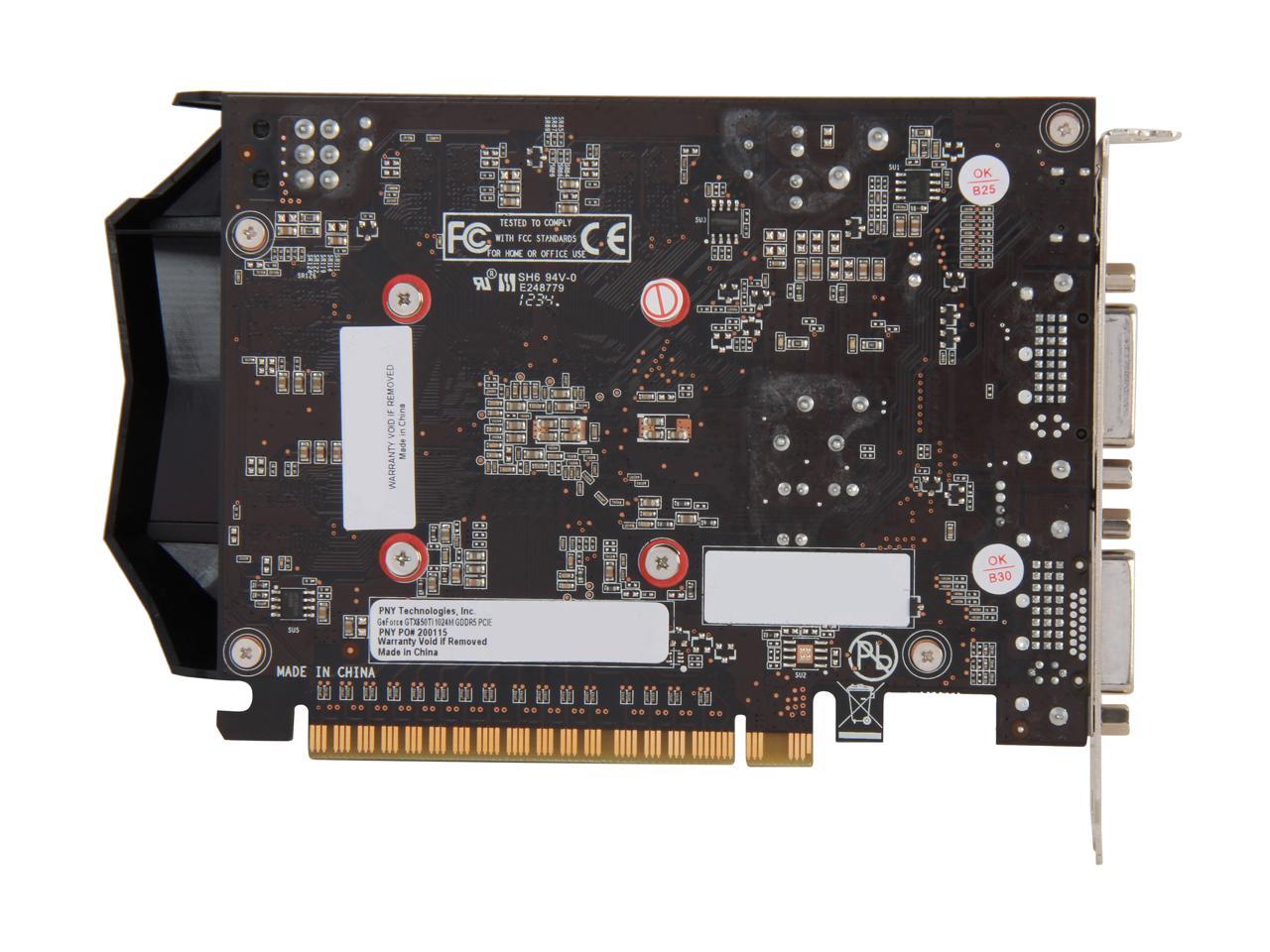 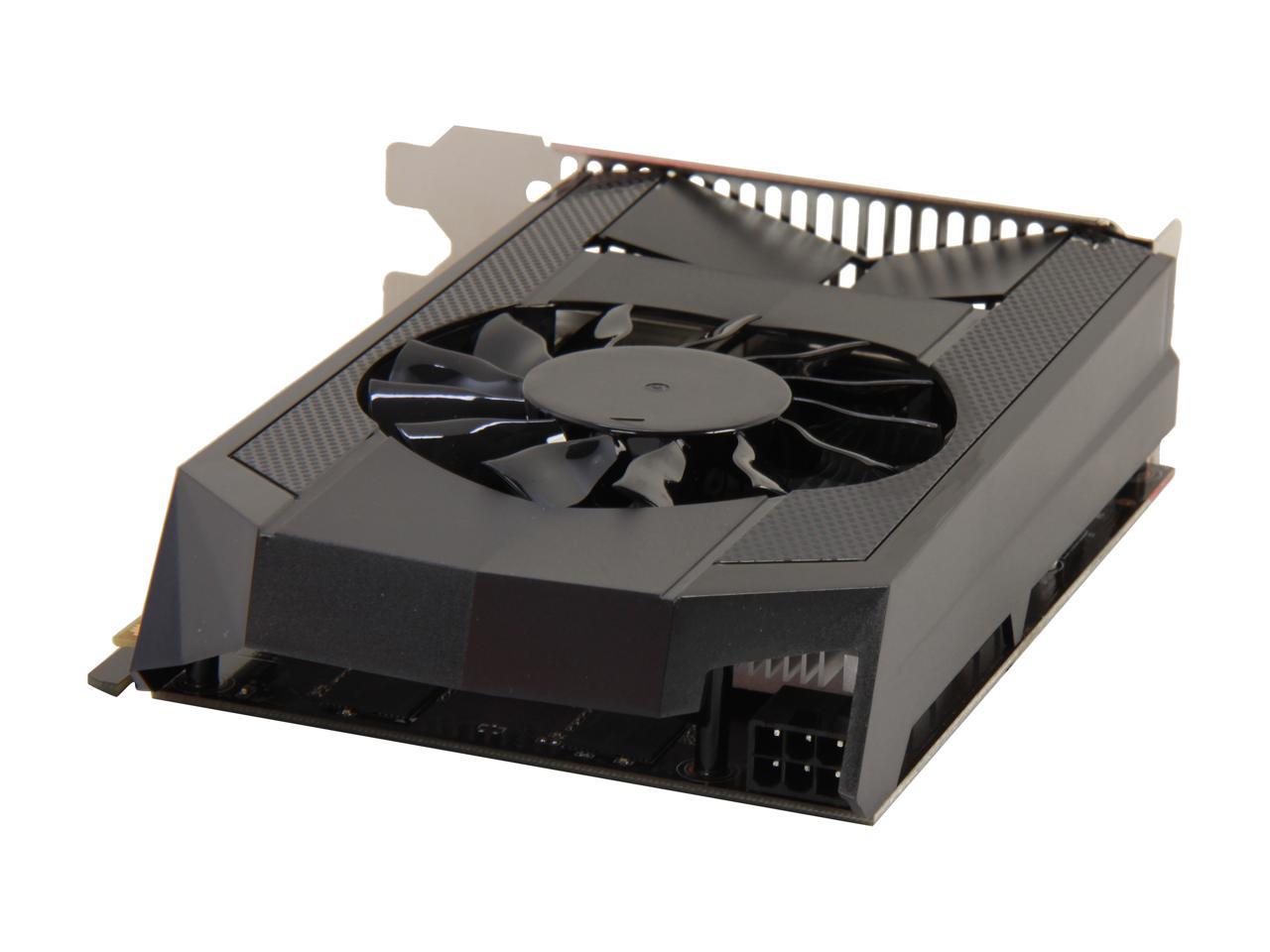 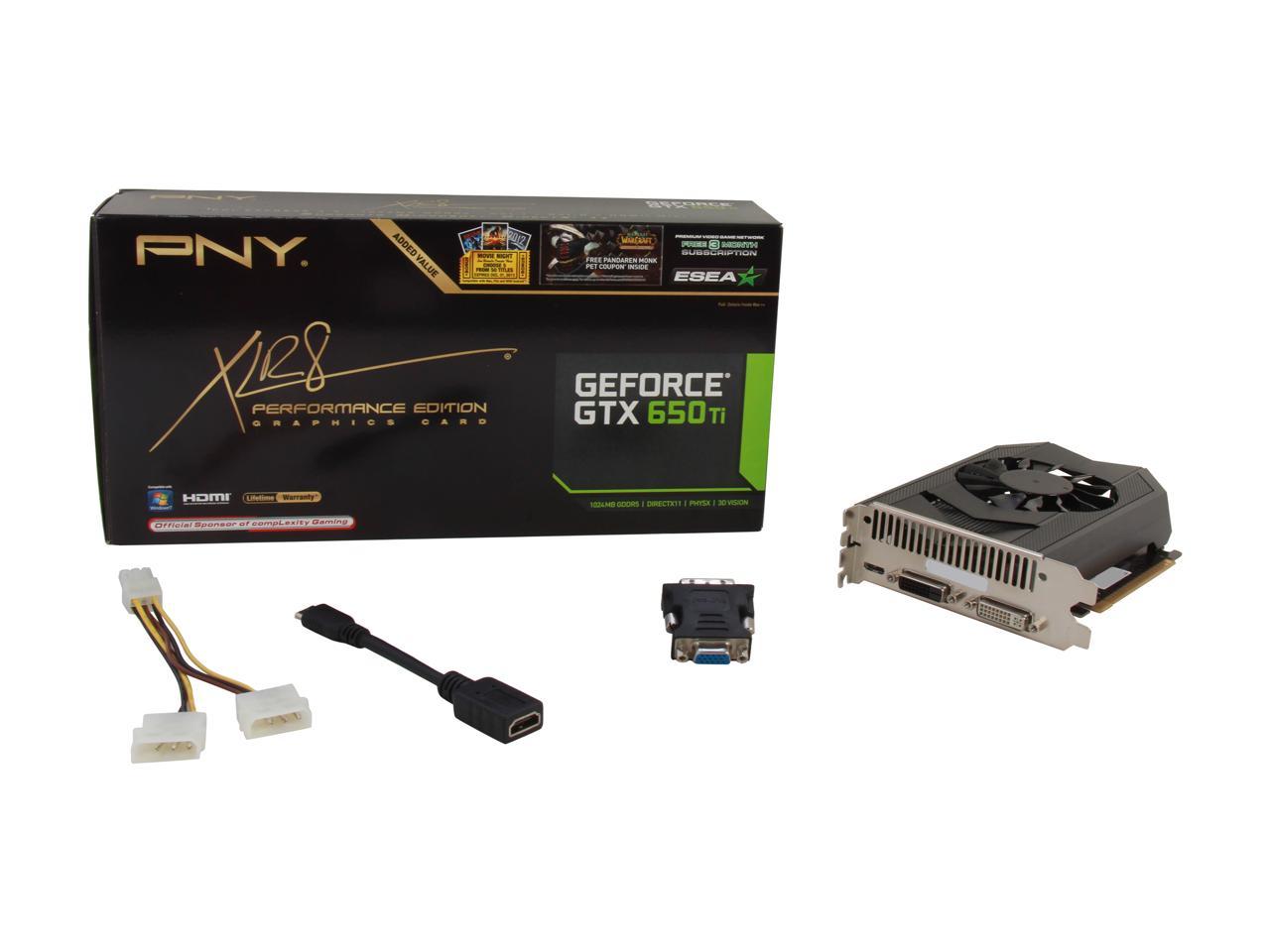 The PNY GeForce GTX 650 Ti provides amazing gaming at remarkable price. If you're passionate about first-person games like Call of Duty, massively multiplayer online games like World of WarCraft, or real-time strategy games like StarCraft 2, GeForce GTX by PNY is for you. Play your favorite games with full DirectX 11 support that blows away your old DirectX 10 card's performance by up to 8x*. Plus, count on the GeForce GTX 650 Ti's revolutionary next-gen NVIDIA Kepler architecture for stunning graphics, 1080p HD brilliance, and rock-solid performance. (*Performance improvement measured versus GeForce 9500 GT.)

Pros: This is an excellent card - especially considering its power requirements, size, and cost. It runs on relatively little power compared to many GPUs of today. You only need to use one pci plug too (or you can use the molex adapter but see below). It's cheap and the price to performance ration on this sucker is nice. It plays all my games very well. I can go between high-ultra on any game I've thrown at it so far. If I put it up to ultra, AA, antsio, etc. and go to busier sections of a game, it will start to bog down. Easy to install. Drivers were easy - my heavens! Coming from a Radeon card, people weren't kidding about the drivers. They work, they update a lot better. I don't have to play hide and seek on which one works best. I don't have to flash new bios. Plus, the computer seems to be more stable. It's very small. I love this and this was about the best small card I could find, without also getting a loan. I have a flex-atx board (between micro-atx and itx boards). It doesn't block any ports and run into the HDD bays or anything like that.

Cons: My only con and I'm not knocking an egg off for, but I should warn you is this card freaked out on the molex adapter. I have a modular power supply and didn't want to plug in the PCI cables if I didn't have to. I already had the molex there for fans. Well, I tried restarting one day - computer freaked. It wouldn't show any video, it would halfway boot, etc. I since pulled it from the molex plug, put it on the pci power rail, and rearranged my case's wiring so it looks better now than ever. Also, no issues now with the card.

Overall Review: Outside of my power issue, it works well. I love it and it's very compact. Also, some other reviews have noted it's very muted - which I find great. I think PNY is on it somewhere, but you don't see any junk on this card. It goes well in an otherwise muted case (Lots of black fans, noctua fans, no LED junk). Last thought - I've seen people mention SLI not existing on this card as if it's a con. This card clearly states from the outset that it doesn't do SLI. It isn't lying to you or anything... so get over it.

Pros: -One of if not the best GPU at this price point, especially if you get it on sale. -Runs most titles at high to max settings at 1080p resolution. -Runs very cool. No need for extra cooling solutions in your case. -Very quiet. Most times I don't even notice it's in there. -Low power consumption. -Easy installation. -Super small. t's just under 6" long so you can put it in pretty much any setup -Lifetime warranty from PNY if you register it. -Multiple display support.

Overall Review: Paired this up with a Cooler Master GX 450 PSU in a budget Lenovo h430 so I could have at least a respectable gaming experience and it blew away my expectations. Installation was a breeze aside from having to tinker with the UEFI BIOS to get the display up. But that's a Windows 8 issue.

Pros: This is probably the best nVidia card you can buy for the money. I bought it from another dealer and should have bought it here, but I had a store credit.

Cons: It's not free?

Overall Review: I wanted to point out the reviewer who gave it 1 egg, who claims to have high tech knowledge, should have known that DVI-D connections do not support VGA>DVI adapters because they are for a pure digital signal as opposed to VGA which is an analog signal. DVI-I connections can utilize such an adapter, which is probably the type of connector found on both DVI ports on his previous card.

Pros: This card runs games very smoothly. This card can run BattleField 4 on high settings and not have any sort of lagg! It never heats up my computer or makes it randomly shutdown. I did get a 440 watt power supply with it due to my computer never getting customized!!

Cons: I really have no had any trouble with this card, installation was very fast and downloading the driver tools seconds to minutes.

Overall Review: I recommend this to anyone who has a low end computer and wants to play very smooth and high quality games likes bf4, arma 3, cod ghost, etc.

Pros: For the price of $130, this card is possibly the best graphics deal on Newegg. Went into a new rig paired with an i5 3330 and 8GB DDR3-1600. - My max resolution is 1600x1200. -Plays all current Blizzard games on ultra/extreme at this resolution no problem. -Plays Skyrim and previous Bethesda titles on Max/Ultra no problem. -Card is small and quiet. OC'd over 10% on GPU and RAM, fan is still quiet, card staying below 60c. -Considered spending the extra $50-$60 on a Ti Boost version, glad I used that for a faster CPU instead. -Have to say I'm liking Nvidia's GTX series. Input latency appears reduced compared to AMDs 6000&7000 series cards. No driver issues to speak of, as compared to multiple issues I've had with AVG, WoW, and Flash using AMD GPUs the last couple years. -Nvidia's CUVID is not as good as Intel's Quicksync when it comes to playback quality in my opinion, but it is there if you need it. -Physix on the GPU is better/faster than running it on the CPU using AMD boards, but I generally disable or don't use the feature anyhow. Not a selling point, but a bonus. I'm very happy with this purchase, assuming it is reliable hardware wise (have had issues when buying *inexpensive* Nvidia based boards in the past. Not so with AMD.

Overall Review: For those deciding between this and a 7770Ghz Edition, I'd recommend this unit instead.

Pros: Fast - plays blu-ray discs without a hiccup, older games (namely Red Faction Guerilla) on it's highest settings in 1080p HD without so much as a stutter Simple install and fits easily inside the typical ATX mid tower case. Shorter than the Radeon HD3850 that it replaced Came with game money, movie downloads, and WoW add on. I'll probably never use them, but the thought is nice :)

Cons: Heatsink, fan, and shroud seem a bit cheap...but they don't seem to be causing issues so I'm not going to deduct an egg.

Overall Review: Combined with a valpak promo code and the MIR I was able to whittle the price down to a little over $100...great deal on a 650 Ti if you ask me!

Pros: Added this to my desktop, was running on the mobo. Easy to install, works fine. Seems plenty powerful for my needs (WOW and video clips). Registration was easy at PNY website, never had an issue with drivers or anything.

Pros: Fast Kepler GK106 chip (same as GTX 660). Overclocks well and runs very cool and quiet. Lifetime warranty if registered within 90 days. This really is a very small and powerful graphics card running at PCIe 3.0 x16. I have always had good luck with PNY products. I had a problem registering this card (my fault) and got an email response from PNY tech support within 10 minutes.

Cons: No SLI support if you would ever need that. Wish I would have bought this card instead of the GTX 650 and the HD 7770.

Overall Review: Passmark shows a 3D rating of 2669 on these cards. With minor overclocking, I test at 3161, which is 46% faster than my overclocked GTX 650 card. The new graphics cards are so amazing. You should buy one of these!