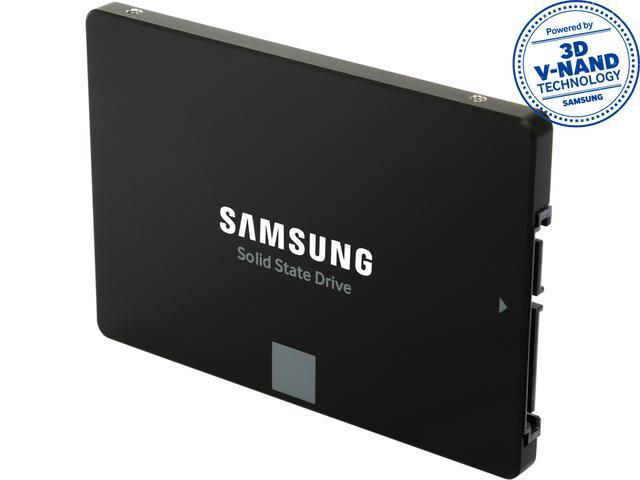 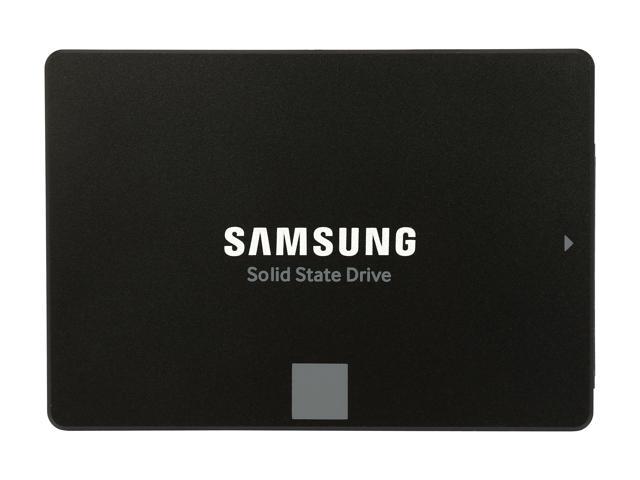 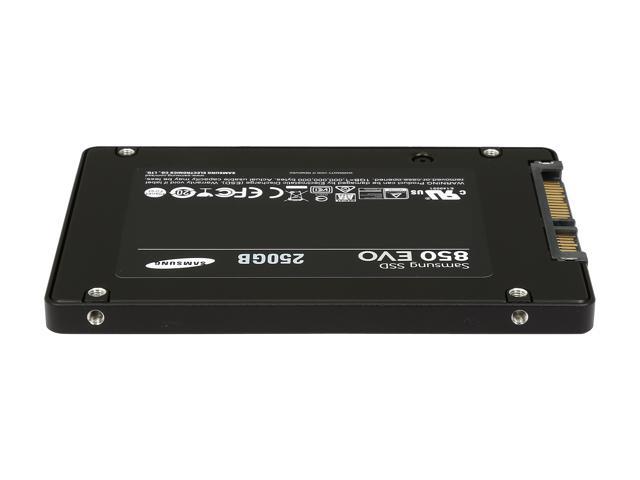 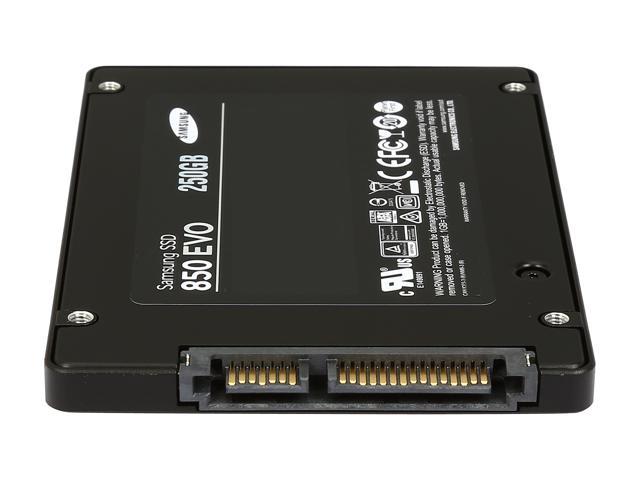 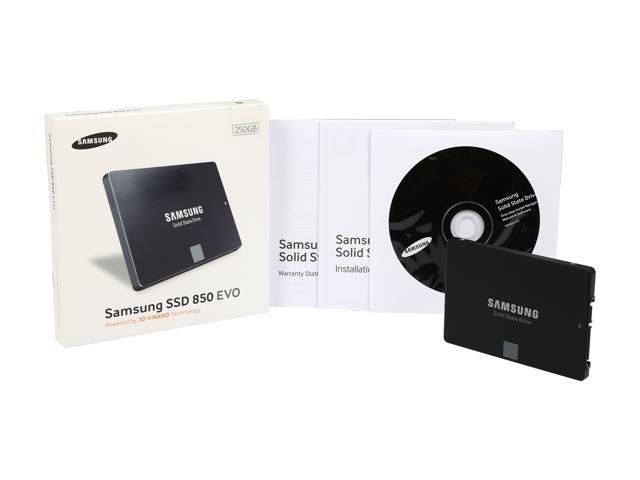 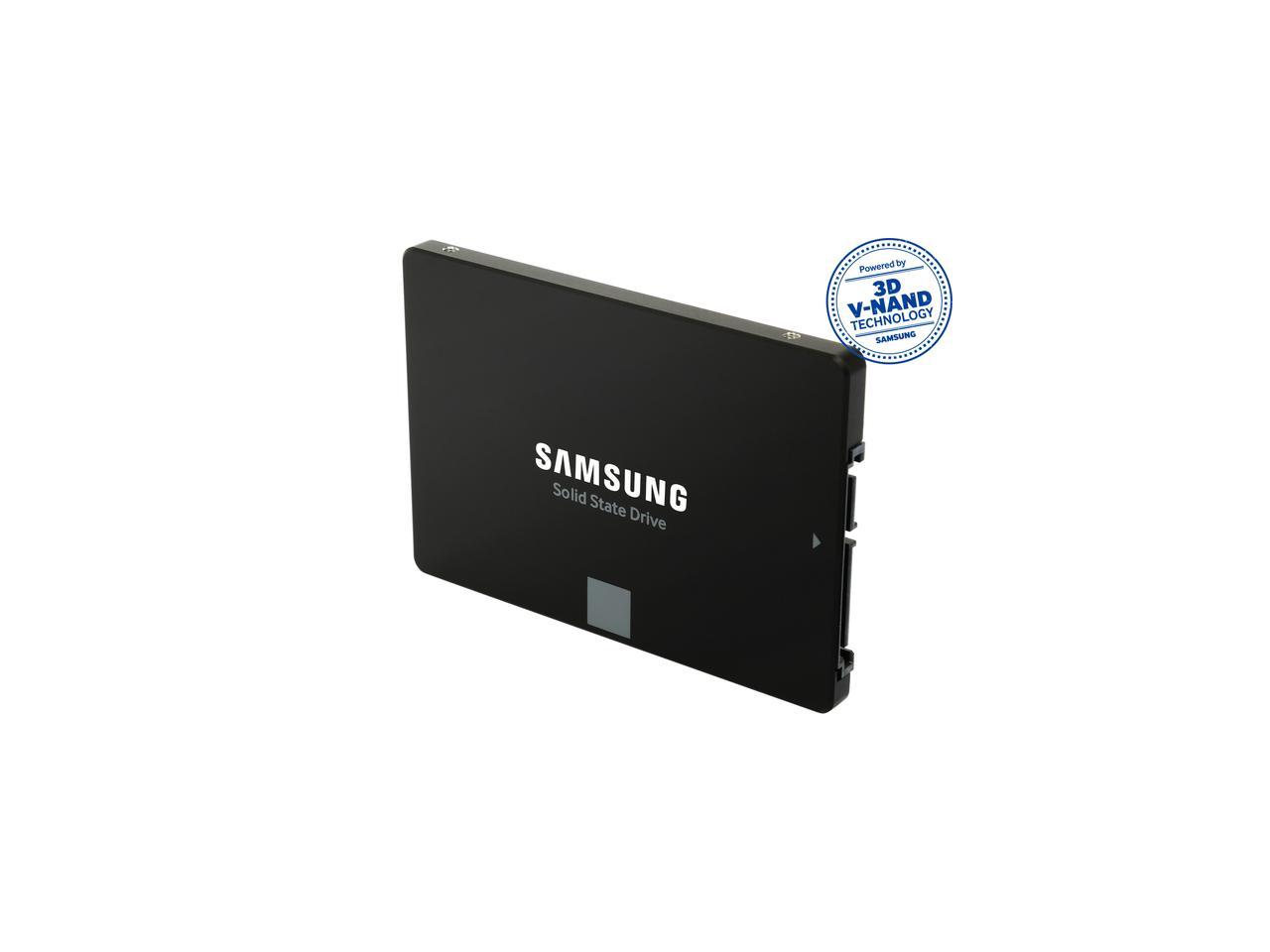 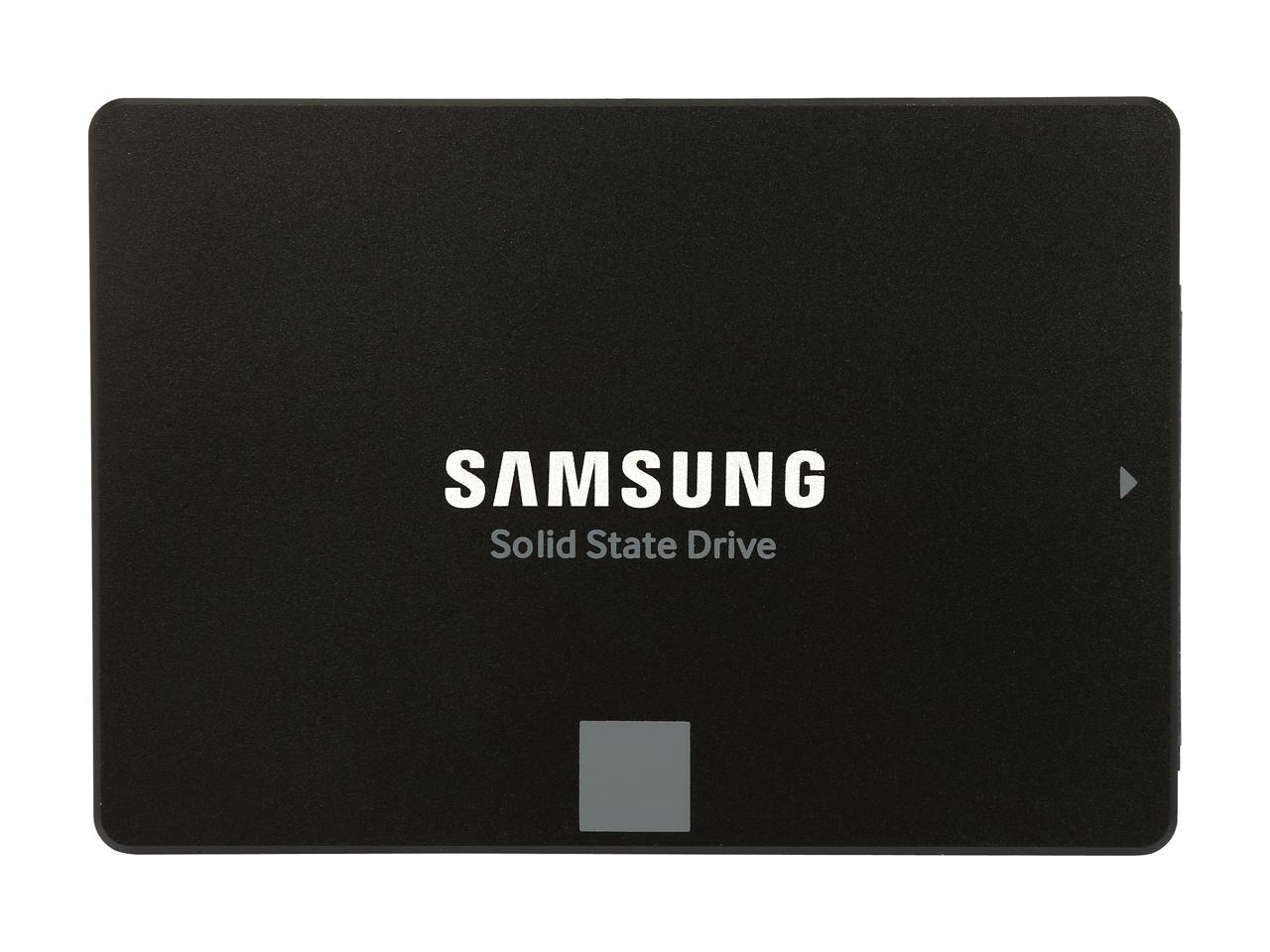 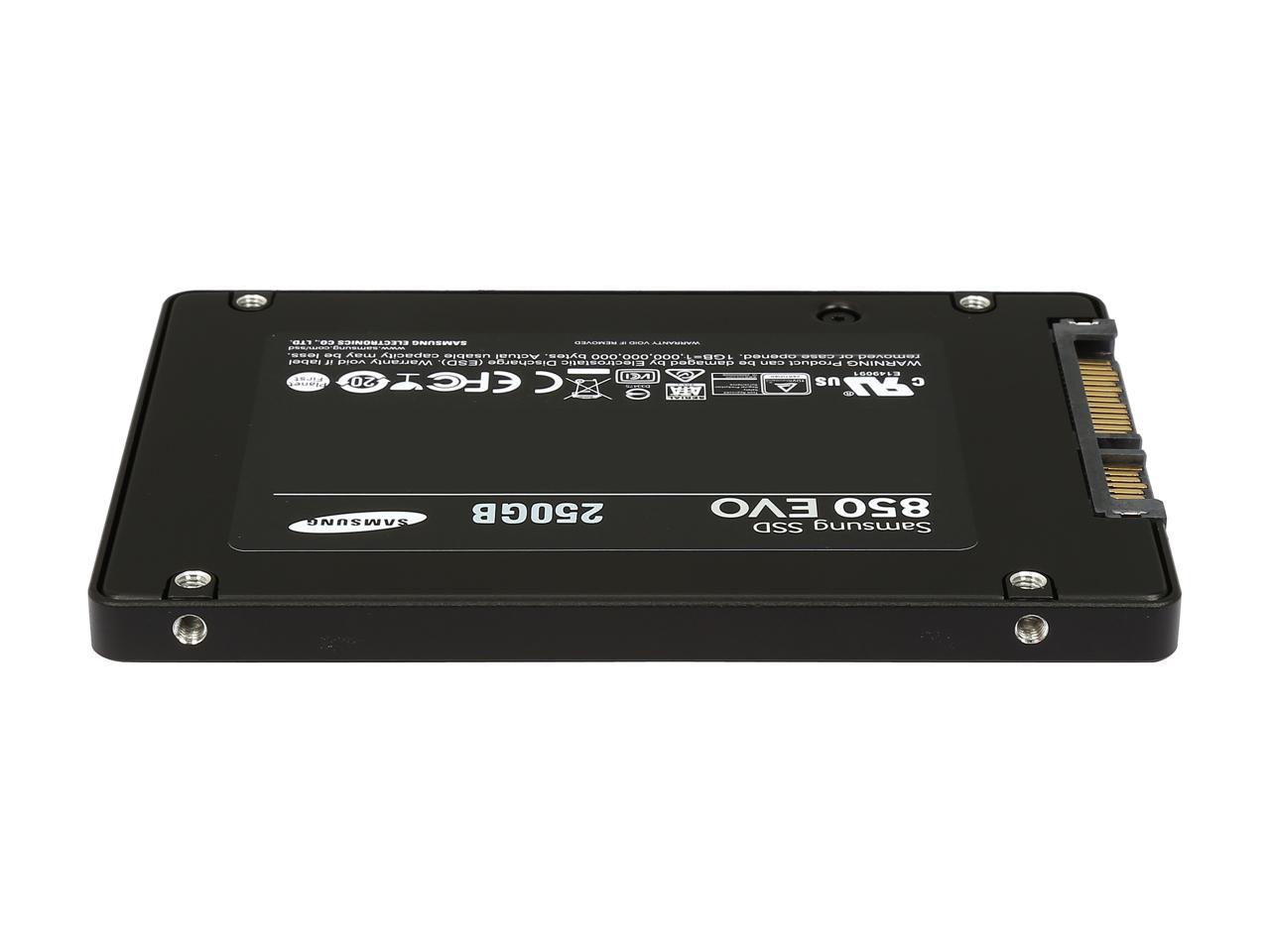 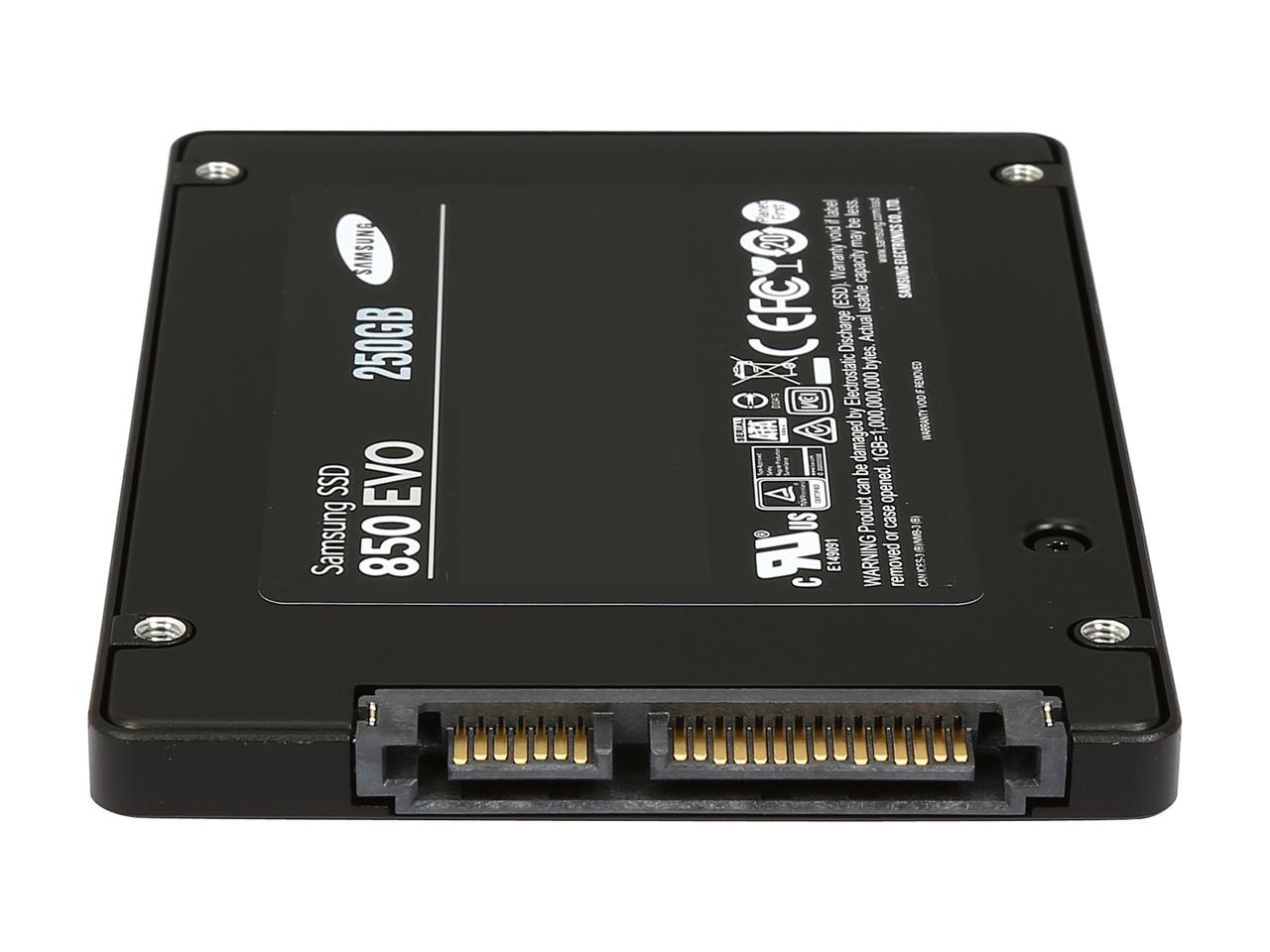 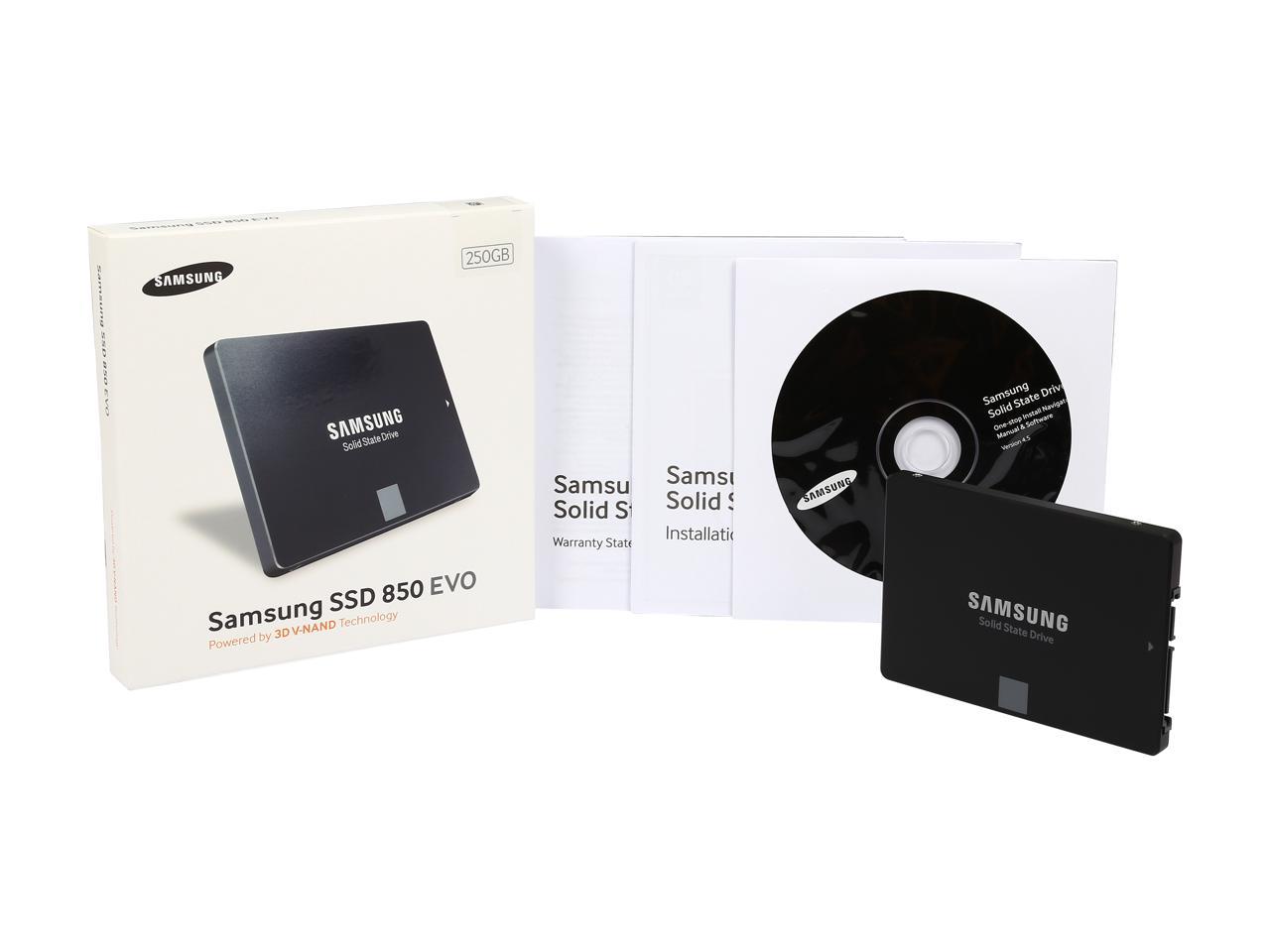 Learn more about the SAMSUNG MZ-75E250B/AM

Overall Review: I picked this up to replace the 128GB SATA2 SSD in my wife's computer, and used the included cloning software to copy over the OS. Everything went without a hitch and she has had no trouble the drive (this is the third Samsung EVO I've purchased so I wasn't expecting any problems). Great SSDs, fast and reliable.

Overall Review: Love these drives. Upgraded from an 840 Evo. Not really any reason to be honest, however I decided that I was going to give my sons computer a boost by upgrading his slow HHD to a speedy SSD. It made sense to give him my year old 840Evo and upgrade to the 850Evo in my rig. The 850 Evo is slightly faster overall, but it is considerably faster with the random read and writes. It does not suffer from the slow down issues that the 840Evo has (although I have not noticed any issues with the 840Evo). All in all a great drive. I really like the Samsung SSD's. I have nothing bad to say about these drives. Buy one today, no real reason to hold back if you have a slow HHD. Capacities are increasing and prices are dropping. At $189 for 500gb you can't go wrong.

Pros: This is a top tier consumer drive. I purchased 2 of these to replace laptop hard drives for family members. One used SATA3 on an AMD A8 laptop and after performing the read/write test with the Samsung Magician software the results matched the advertised read/write speeds. The other Laptop was SATA2 and performed as expected, I do not have the exact numbers. The Magician software is among the better software provided by SSD manufactures with all of the normal tools you would need to maintain and monitor your drive's health and performance.

Cons: I had attempted to use the Samsung Migration software using and external USB3 drive dock. The software never recognized the external drive and after some research online you need to ensure you have a basic USB to SATA adapter with no additional features like hot swap. It will not recognize the drive. The instructions that came with the device are also very poor. It's just pictures with really no instructions at all. This could be greatly improved or not even included and just a reference to online documentation.

Overall Review: I ended up using Acronis Backup and cloning the original drives to an external USB HDD then restoring the image to the new SSD. Once replaced the drives worked as expected with no issues and perform beautify.

Manufacturer Response:
Jason W.: Thank you for purchasing the Samsung 850 EVO SSD. I am sorry to hear that you had difficulties with the Magician Software. Samsung is committed to providing the best possible product experience, quality, and value, and we are always here to help with any of your questions or concerns. Should you ever need assistance, please contact Samsung Customer Support toll-free at 1-800-SAMSUNG and a representative will gladly help you. Support hours are from 9AM to 9PM EST, Monday through Friday. You can also email Samsung Customer Support at: samsungmemorysupport@sea.samsung.com
William F.
Ownership: 1 week to 1 month

Pros: I picked this drive up for $99 shipped a couple weeks ago. Compare that to the 840 EVO 250GB that I bought a year ago at $180 and thought that was a deal... oh well. I'm glad storage prices are on the down again. Samsung SSD's are top of the line. Reliability and performance are hard to beat, especially for the price. I'm now running this SSD in RAID-0 (block level striped performance) in combination with the afore mentioned 840 EVO, both attached to SATA3 ports. During setup of this configuration I learned to watch out for mixing SATA2 and SATA3 ports on a RAID configuration, or you might experience corrupted files or volumes with extreme difficulty troubleshooting the problem... I almost sent the SSD back for RMA! Most reviewers are going to provide you with some single-drive performance numbers, so I won't beat a dead horse. Instead, here are my RAID-0 performance numbers for your enjoyment: [ATTO v2.47 - 256MB length - Direct I/O - Neither mode] File Size, Read speed, Write speed --------------------------------------- 1KB, 19MB/s, 24MB/s 4KB, 59MB/s, 61MB/s 64KB, 347MB/s, 406MB/s 1MB, 884MB/s, 909MB/s 8MB, 1015MB/s, 1045MB/s For the first time ever, I was able to break the 1GB/s barrier! The Samsung Magician software shows similar performance results, as well as HD Tune v2.55. I'm very, VERY, pleased with these SSD's!

Cons: I have no cons about the drive itself. It's a perfect 10 as far as I'm concerned. However, I wish the drive came with a 3.5" to 2.5" bracket, because I'm running out and keep having to order more. I also wish it came with a SATA cable... running out of those, too!

Pros: Got it for an upgrade of a friends computer, install was easy, and system had a nice speed boost over the standard HDD he was using prior. Highly recommended. I was also surprised out how light weight the drive actually is compared to even other SSD drives! (great point for a laptop where you want light weight portability - minor but it all adds up!)

Pros: I’m replacing a 120G Corsair Neutron GTX that’s a little over a year old. It’s installed in my production machine that has an ASUS Maximus GeneVII motherboard and a Haswell i5 processor. I use this machine every day for standard chores including a lot of downloading, Internet Surfing and burning tons of BluRay discs. It has 8 gigs of memory and uses the built in Intel graphics. The Corsair SSD was always lightening quick and dead reliable. It really didn’t need replacing because I store everything on a 3 Gig hard drive. But I guess I just wanted to see what the hype was with the Samsung drives. To be honest the Samsung seems no faster or more responsive then the Neutron. It’s quick for sure but not… magically fast. The experience is exactly the same. I will give the Samsung Magician software my highest praise for doing everything you might ever need or think you need. Rapid Mode didn’t seem to make any difference in speed and adds approximately ten seconds to the boot time. The OS Optimization section contains almost every OS trick you’d ever want to know and of course there is an included TRIM applet. Very complete and very user friendly and included with the drive on one of those miniature discs. It has a 5 year warranty which is better than most SSDs although this is new technology and who knows how it will fare a few years from now.

Cons: It’s certainly fast but not enough of a performance jump to necessitate upgrading from any recent performance SSD. The drive is bare bones and all that’s included is the Magician software disc. Does not have a quality feel to it but this is a subjective appraisal on my part. It’s expensive or at least in comparison to other drives of the same performance tier.

Overall Review: This is my first Samsung SSD and the reason I bought it was all the hype. I don’t know, maybe it’s just me but I’m not terribly impressed by the 850 Evo. It might be the light, plastic feel when I picked it up. I’m just not sure but it’s not doing anything for me. It’s possible I’m just becoming blasé at SSDs. They don’t hold the technological mystery they once did. They’re becoming utilitarian like mice or keyboards or hard drives.

Cons: After 1&1/2 years, it crashed on me. It shows in BIOS, but when I go to reinstall the OS the drive size shows as NaN or 0MB.

Pros: -Replacing my 2TB HDD on my Asus G20CB with this for the main OS. The 2TB then became a bulk misc storage drive. -Samsung migration software was flawless and easy to clone my existing drive, took 1 hour for about 450GB to clone. Make sure you download the latest software from their website for the magician software as it won't recognize windows 10 if you don't, and then you can't enable RAPID. -RAPID when enabled, makes this thing FLY, it uses some system RAM for like a cache enabling super fast initial bursts. Maxed out the benchmarks at 6105MB/s sequential read, 5480 MB/s sequential write, thats not a typo either. -Easy install -Feels high quality -Great warranty and endurance ratings -Boot up is ridiculously fast and it was pretty fast before this upgrade.

Overall Review: -I'll update this if necessary as only time will tell if the warranty is good and its endurance ratings are accurate.