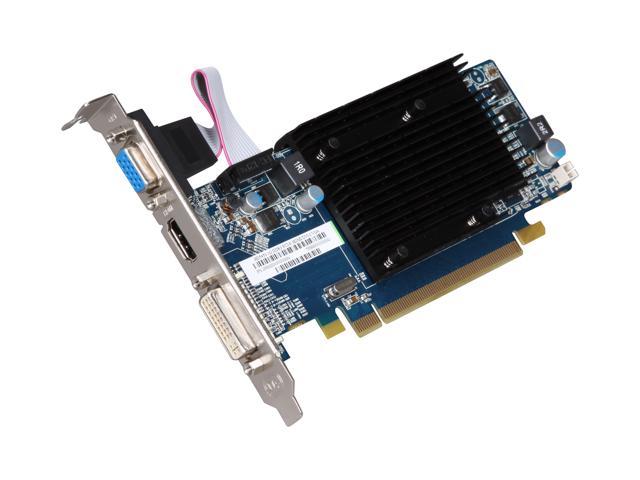 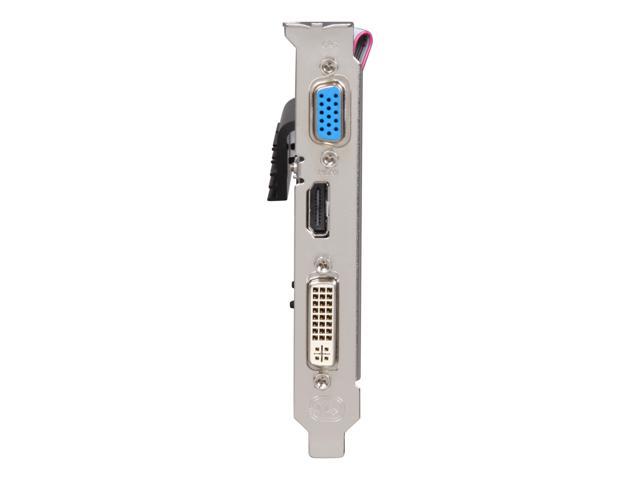 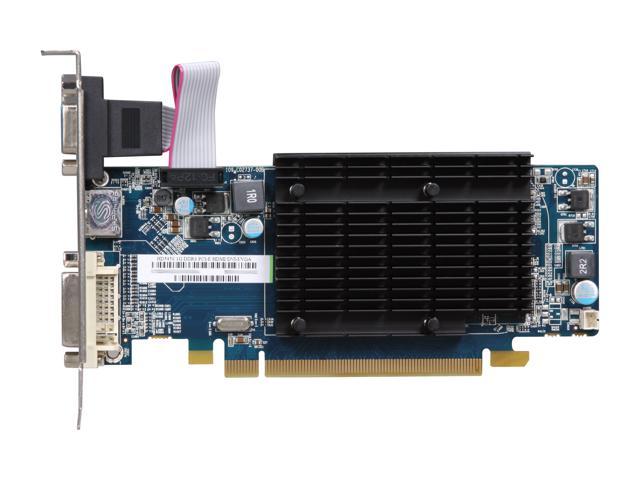 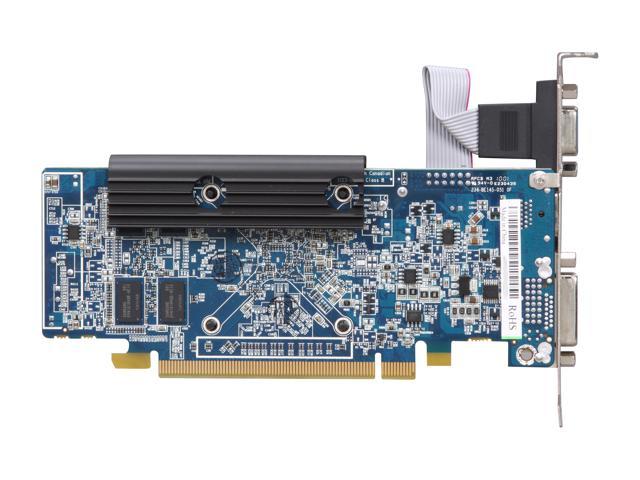 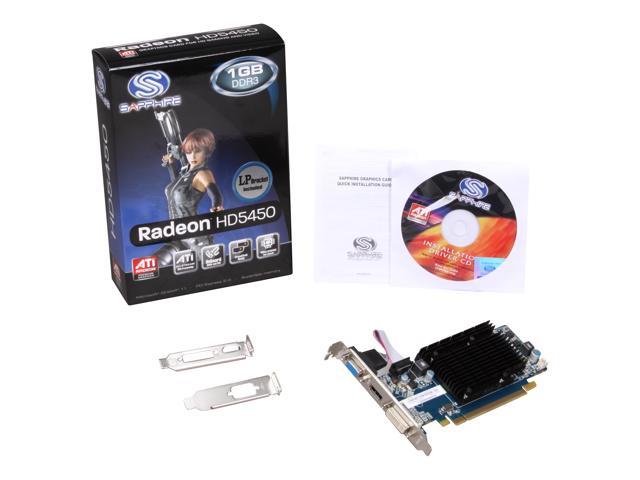 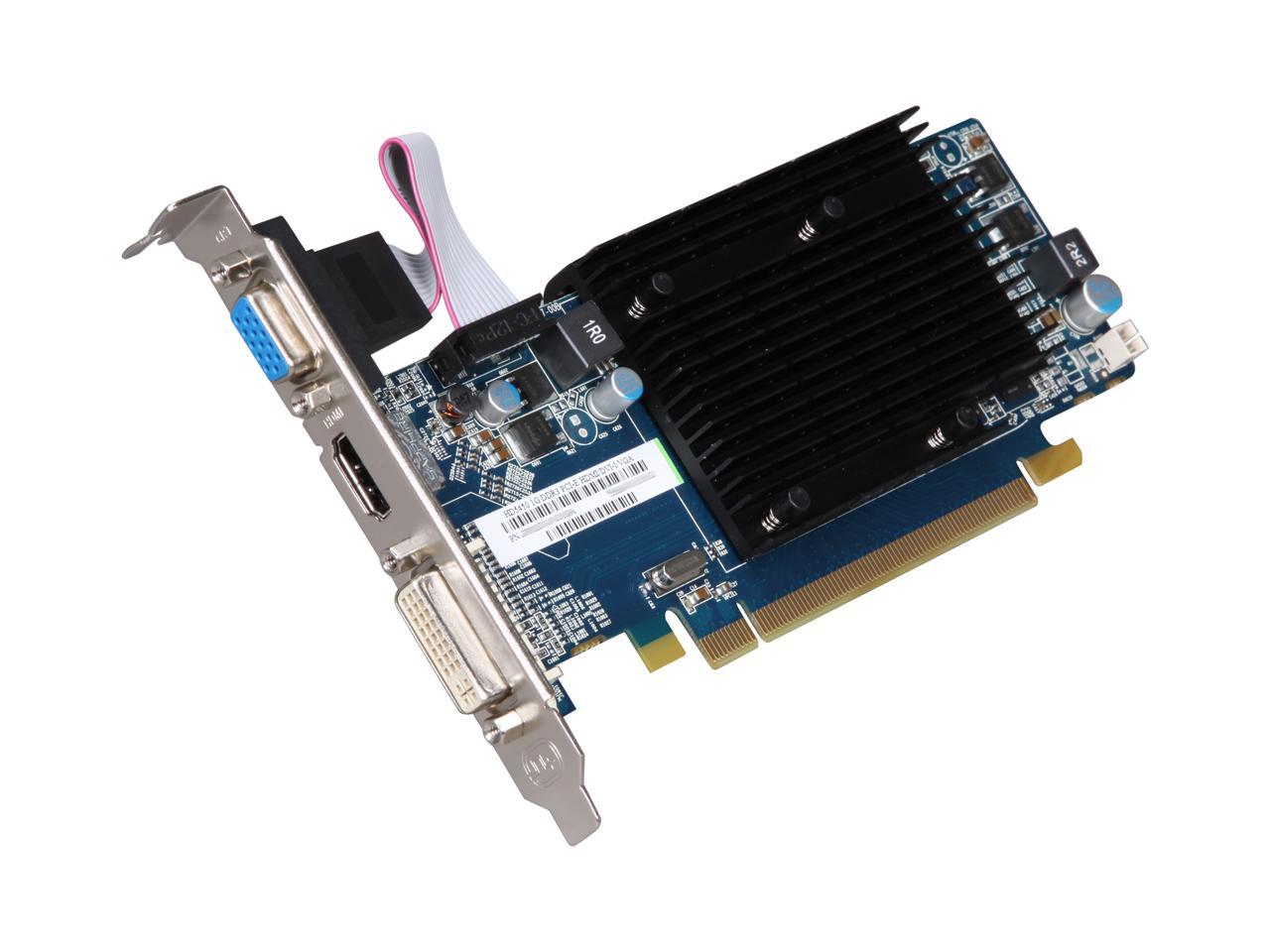 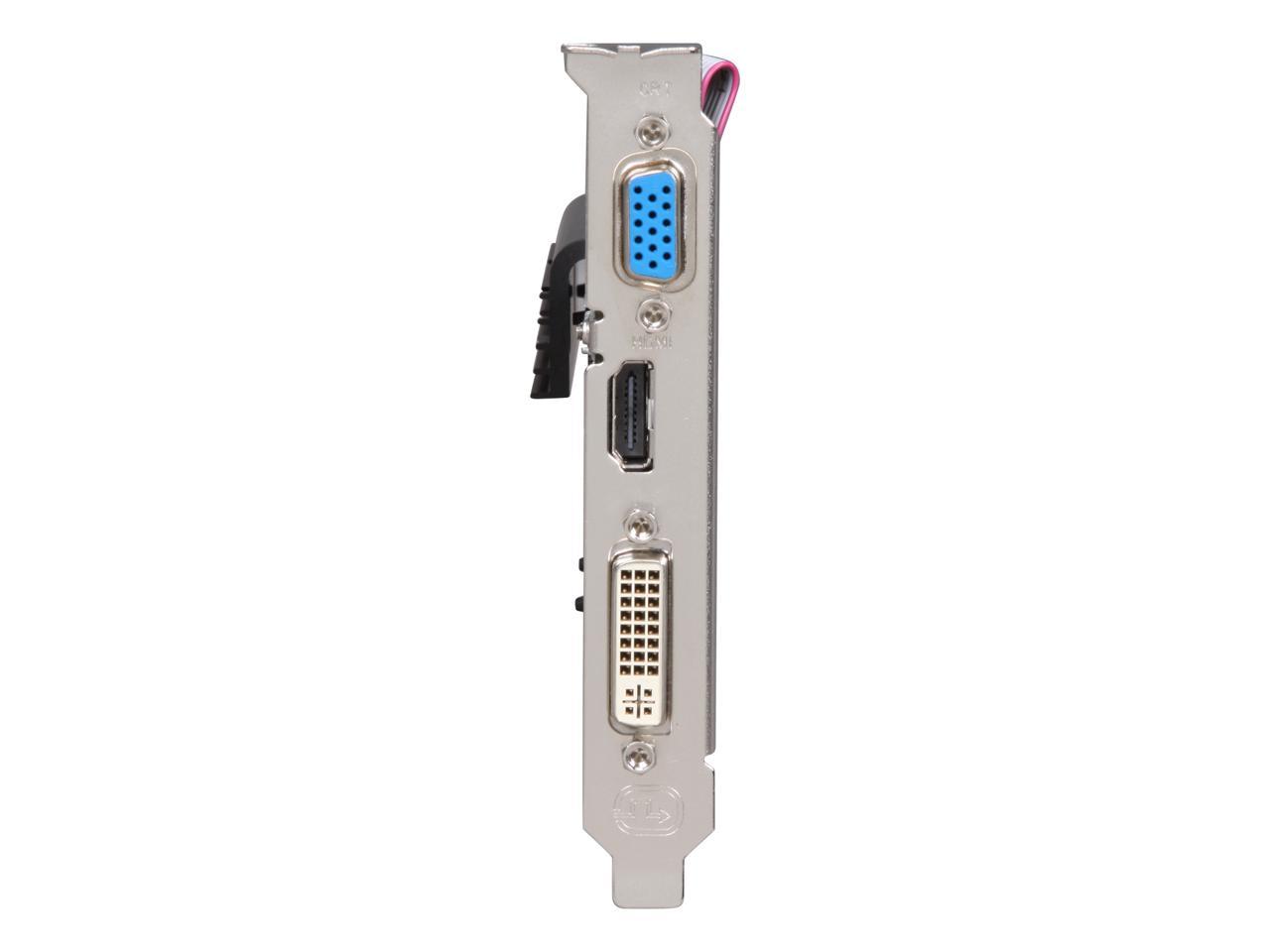 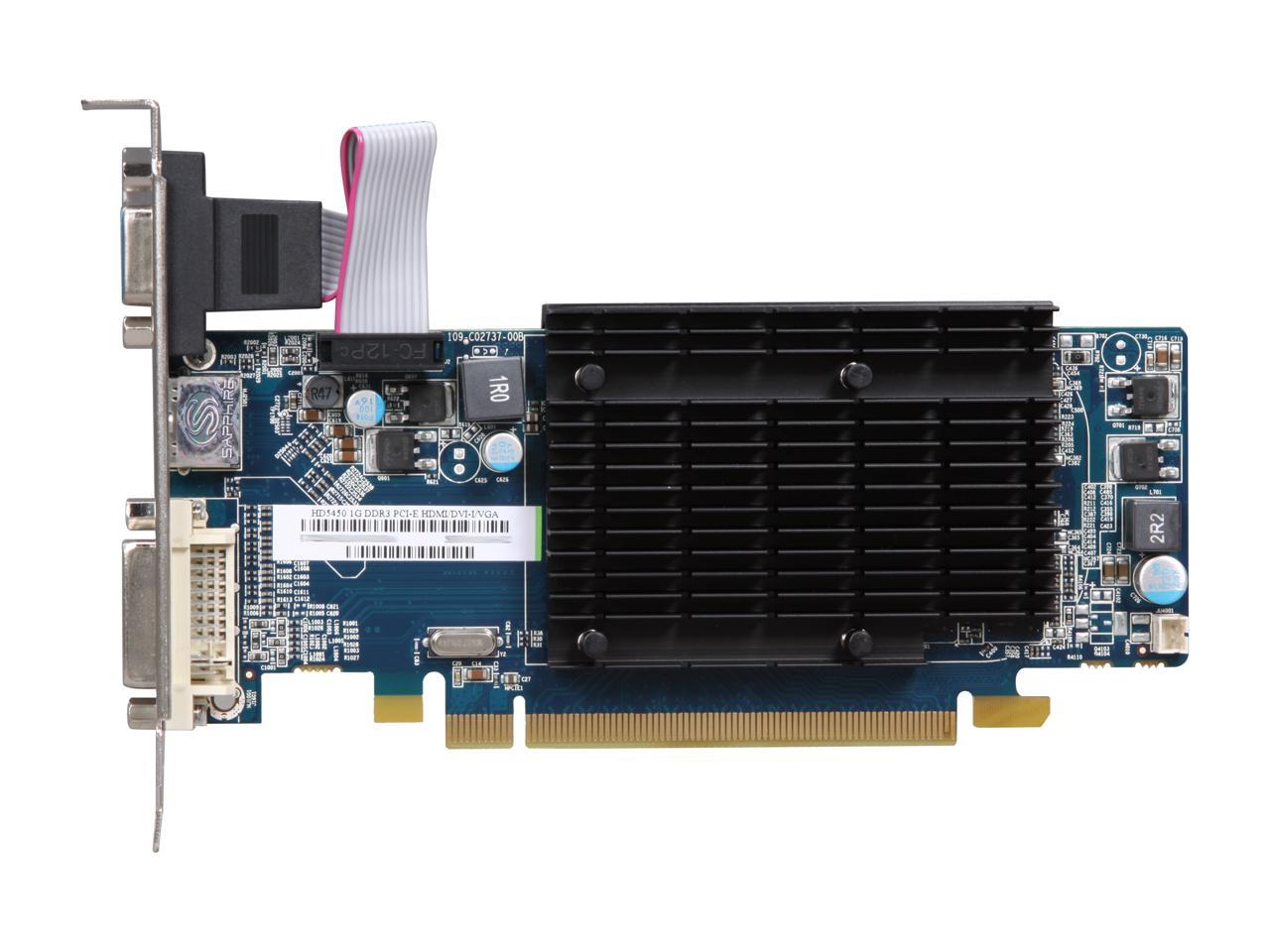 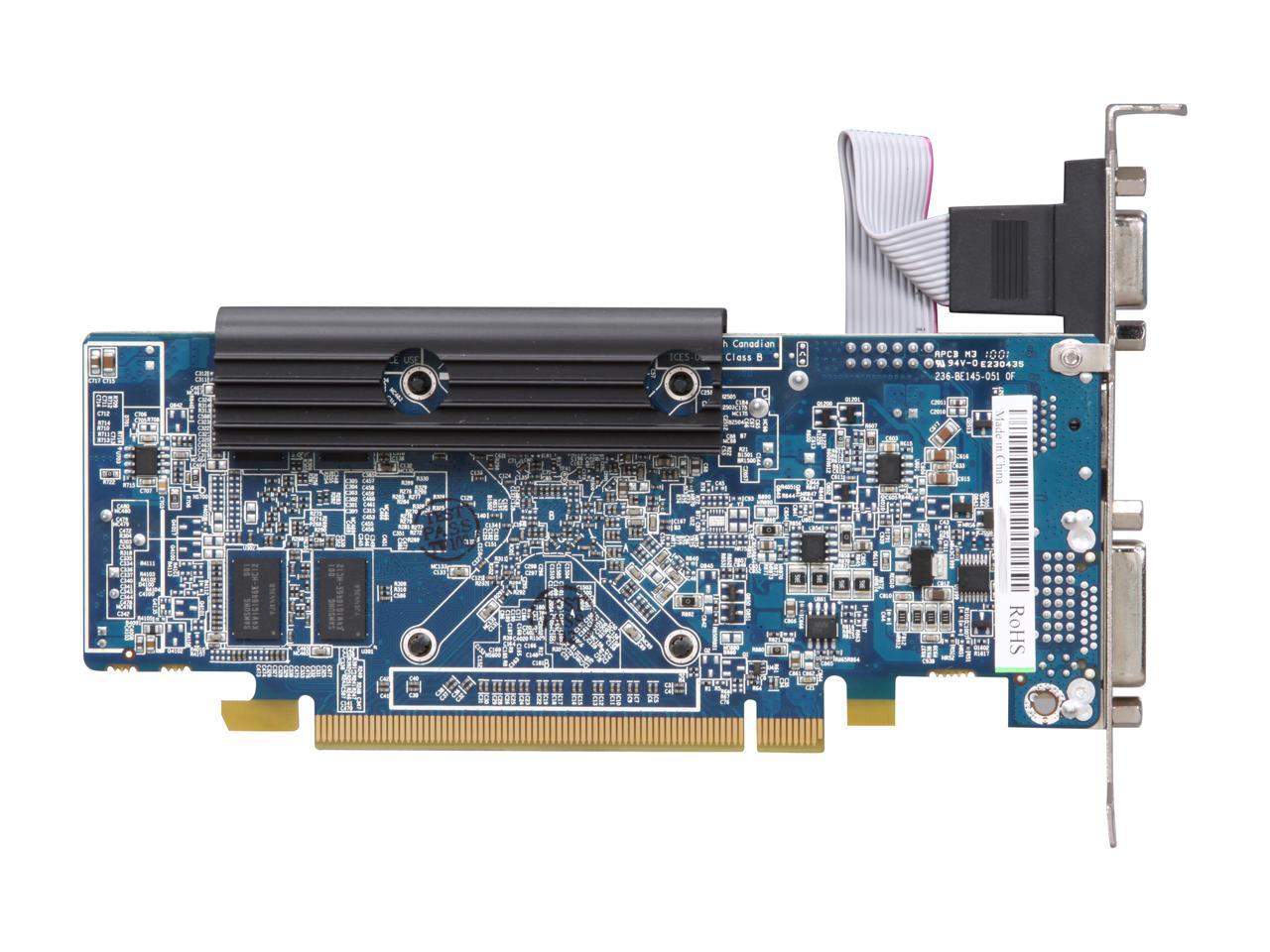 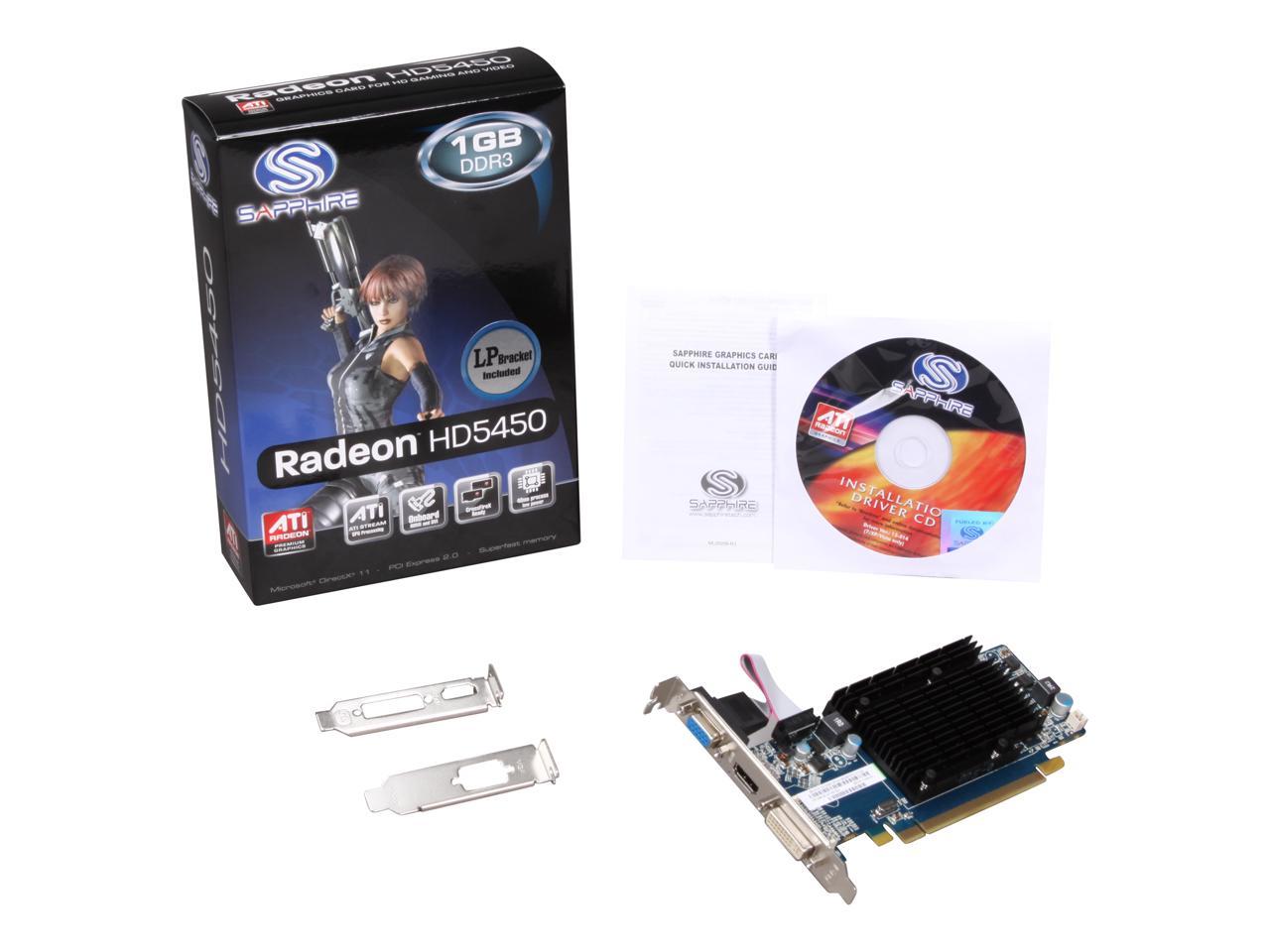 (382) Write a Review
OUT OF STOCK.
Overview
Specs
Reviews

The SAPPHIRE HD 5450 graphic cards offer complete DirectX 11 support and  advanced graphics, display features and technologies as well as the most features and functionality in their class. The HD 5450 Series is designed to give you stunning high definition entertainment from your PC, whether Blu-ray/HD DVD discs or other HD sources. Also, you can get an amazing entertainment experience with DirectX 11 and Windows 7 via HD5450.

Pros: The SAPPHIRE Radeon HD 5450 is you basic video card by no means this is not a gaming card, this is for movies, that kind of thing.

Cons: There is none it is still going strong.

Overall Review: I got this for a customer when his onboard video went out, it was a quick inexpensive fix and works just fine after all this time.

Michael B.
Ownership: more than 1 year

Pros: I own multiple AMD/ATI Radeon HD 5450 cards from Sapphire, XFX and PowerColor. All the cards meet my needs (I'm not a gamer). My heaviest demand is Windows Media Center (MCE). The Sapphire (I own two) and PowerColor have 1GB of DDR3. The XFX has 512MB of DDR3. Other than the amount of DDR3 RAM, I thought the cards would be identical. Boy was I wrong. I am posting my results, comparing the three vendors.

Cons: Using CPUID HWMonitor all four card cores run at 650 MHz. The DDR3 on the two Sapphire cards run at 667 MHz (above spec); the XFX DDR3 at 533 MHz (at spec); the PowerColor DDR3 at 400 MHz (below spec). All the cards are 64 bit, so card specs double the MHz. The Sapphire and XFX reduce the core and DDR3 MHz under light load (to reduce power and heat). The PowerColor remains constant at 650 and 400 MHz. Running the same (real life) workload (Windows MCE), the Sapphire utilization is ~28%; the XFX ~58%; the PowerColor ~60%. The Sapphire operates at ~47C; the XFX ~43C; the PowerColor ~49C. From visual inspection, the Sapphire has the largest heat sync (it wraps around the card). The XFX heat sync is smaller (only extends above the card). The PowerColor has the smallest heat sync. Windows Experience Index (Desktop Graphics, and 3D Business and Gaming): Sapphire (4.5 and 6.1); XFX* (2.7 and 5.4); PowerColor (3.4 and 5.7). * Note the XFX card only has half the DDR3.

Overall Review: By nearly every metric I measured, the Sapphire is the best; the XFX a near second (given equal DDR3); the PowerColor a distant third.

Pros: I have two 5450's (both were free with combos/rebates) have them crossfired and overclocked (these aren't gaming cards but they are free and i needed something) i'm actually surprised that i was able to play fallout 3 at max setting at 720p and med-high at 1080p. (rarely have slow downs but that happens even on the best of systems on fallout 3)

Cons: installing the drivers on CD that come with the card cause a BSOD. Just use the offical drivers from AMD and all will be fine.

Overall Review: It came with a sticker? A low entry level card doesn't need a case sticker advertising that you have you computer running something this low end. Although i will admit this card works well for most things at it's price.

Pros: Silent, good performance for a budget card. Easy install for WIn 7 Requires a reasonable amount of air flow through your case. For example. It will overheat, and shut down, in a Dell Optiplex Small Form Factor case, but will run happily in the Small Desktop case.

Cons: This is the second time that I have been unsuccessful at obtaining a rebate from Sappire's rebate partner. I will only buy compellingly priced cards (without rebate conditions) from this manufacturer going forward.

Pros: Quiet and fast. My Core 2 (4300) 1.8GHz Dell Optilex 320 with 2gig memory would run at over 90% CPU watching HD videos on the built in video card. Now, with this card, it's down to 45% CPU with full screen HD. Exactly what I wanted... and no GPU noise. The thin format Dells also don't have many watts for the PCIe bus (just 25watts). This card uses about 20 when maxed out so it was a perfect choice for my power requirements.

Pros: Card works fine, does what its suppose to do, which is what I paid for. 2 monitors no problem. Hooks up to tv and works great. I would recommend it still. its on a home built running XP, 7 & 8 with no problems.

Cons: Didn’t get rebate, which is rare so I know it’s the company and not me.

Overall Review: The software is 5 star to me for sure, but only giving it 4 for lack of honesty about the rebate.

Pros: My son loves that he has dual monitors. This video card is working great.

Cons: Just like one of the other reviews. My rebate was denied because they said I did not include a copy of the invoice. However, the link they provided to check the documentation showed a clear copy of all the necessary paperwork including the invoice.

Overall Review: Is there somewhere to report this sort of scam. TD had issues with rebates a few years ago and had to fix their problems.

Pros: Cheap! (plus super rebate IF it works) Sorta supports eyefinity? (it worked on 2 displays, I hope 4 displays with 2 cards, google spanning vs extended desktops) Fanless (silent) Works with integrated HD4250 (on AMD 880G northbridge) in hybrid crossfireX. Low profile bracket (either 1 pci with 3 ports, 2 low profie with 3 ports, or 1 low profile without VGA-- just look at the picture). I don't need it but it's nice for the people who SHOULD be buying this card (HTPC builders, not gamers). This card is ideal for an HTPC setup. 1080p video on 2 displays was super crispy. I would not suggest the 880G with integrated HD4250 in conjunction with a HD5400 as a cheap crossfire solution. I just happened to end up with them both and tried it. WEI (Aero/Gaming) HD4250 (with a gentle boost from clever ASUS stuff) ---4.6/5.7 HD5450 ---4.5/6.1 HD5450 with Hybrid CrossfireX enabled 5.1/6.3 I disagree with other reviews about the driver disk. I thought it worked just

Cons: All fanless cards run hot. The card can handle it, but this will increase your overall system temp. I haven't noticed anything that worries me yet, but it's only been about 2 hours... It's cheap. The card does exactly what you pay for, no more. I'm happy with what I bought because anytime I see a number I don't understand, I google it. While the WEI says it's better, my only test disagrees. Tribes Ascend Closed Beta (like them on facebook for a free beta key) handled better on the HD4250 alone. With the settings at minimum, I got about 27 FPS with the integrated and about 19 FPS with the HD5450 in hybrid. I did make other changes, this may be an error on my part. It's only been 2 hours... A note to fellow cheapskates: If you're considering this card because you want the cheapest 1GB card for games, I'd suggest a long detour to wikipedia. Also, don't buy this if you think hybrid crossfireX is just as good as real crossfire. If it was, everyone would use it. Again, w

Overall Review: Installation was mostly smooth. Minor, but not for a newb. I disagree with most other reviewers about the drivers. On plug-n-play it choked horribly and reverted to 600x800 but the driver disk replaced Catalyst Control Center with AMD VISION control center. I got hybrid crossfireX working after a couple tries. HTPC builders: This is the card you want. It's cheap and small and does the job. Yes it will get hot, but it's supposed to. I bought 2 of these (only have 1 so far) along with a new LCD TV (plus mount, cables, etc) in hopes of quad displays. I'm not a gamer, I just wanted it. I didn't buy a board with 880G or this card because I wanted hybrid corssfireX. It just worked out that way. Tested with: Asus M4a88TD-V (880G with HD4250 onboard) Phenom II 555 (unlocked 1 extra core, gentle OC to 3.7ghz) Top: Element ELDFT321 32" LCD TV Center: Dell ST2420L 24" LCD monitor Wings: 2x 17" chineese junk LCDs AUX: Sony GDM W900 21.5 CRT via BNC composite to VGA (vinta