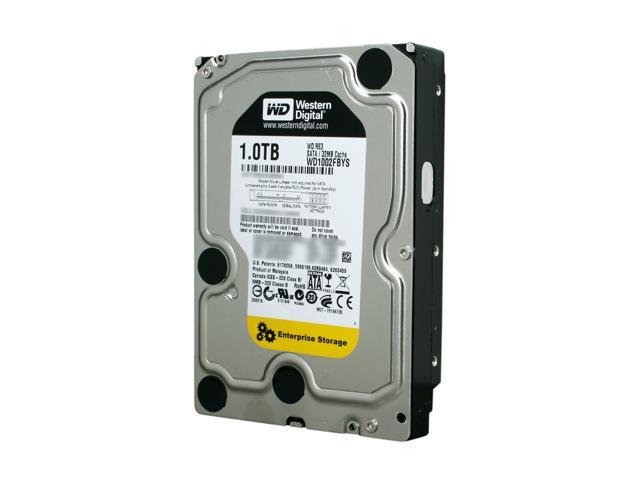 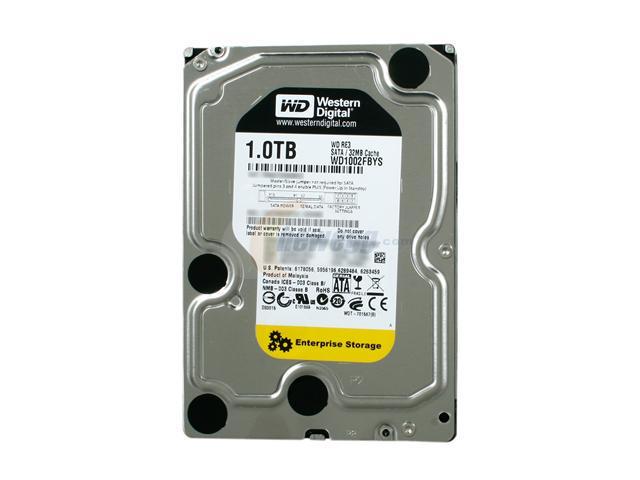 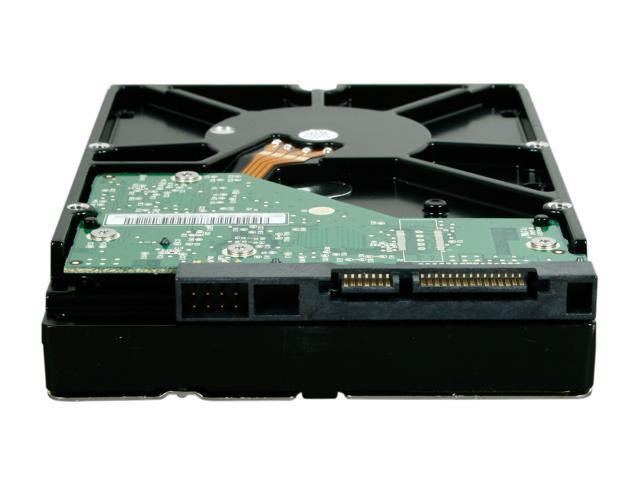 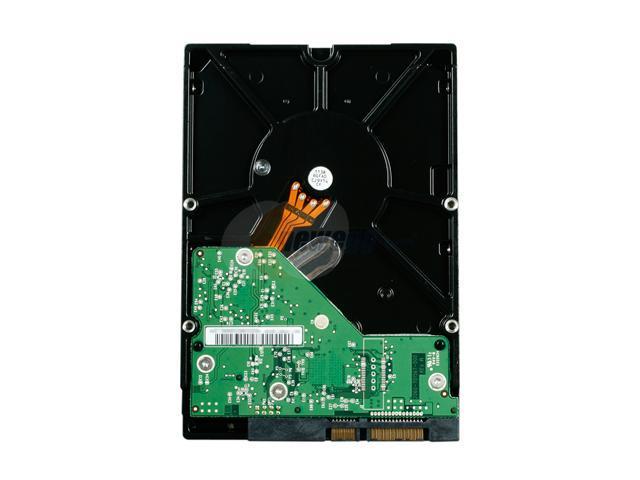 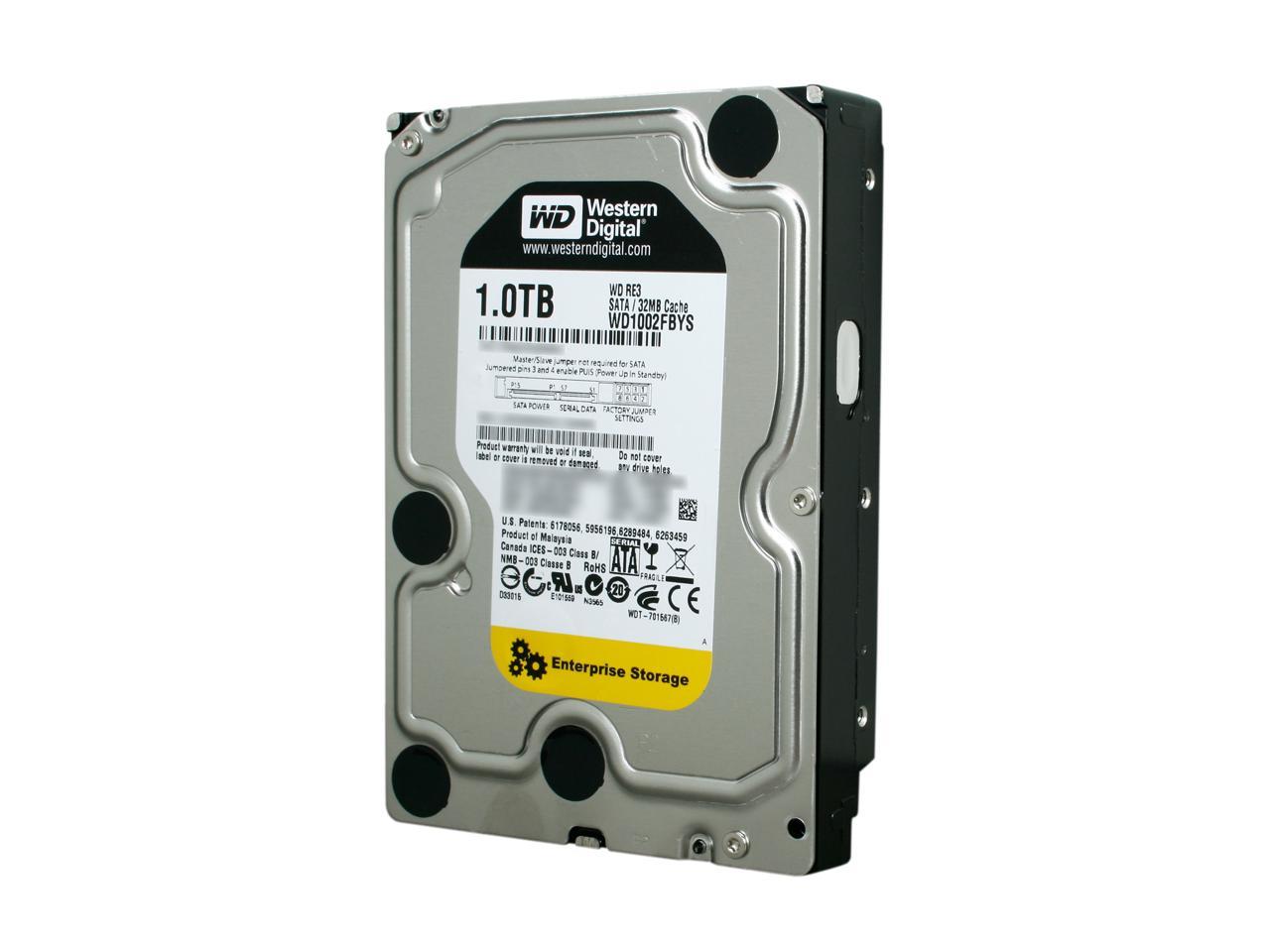 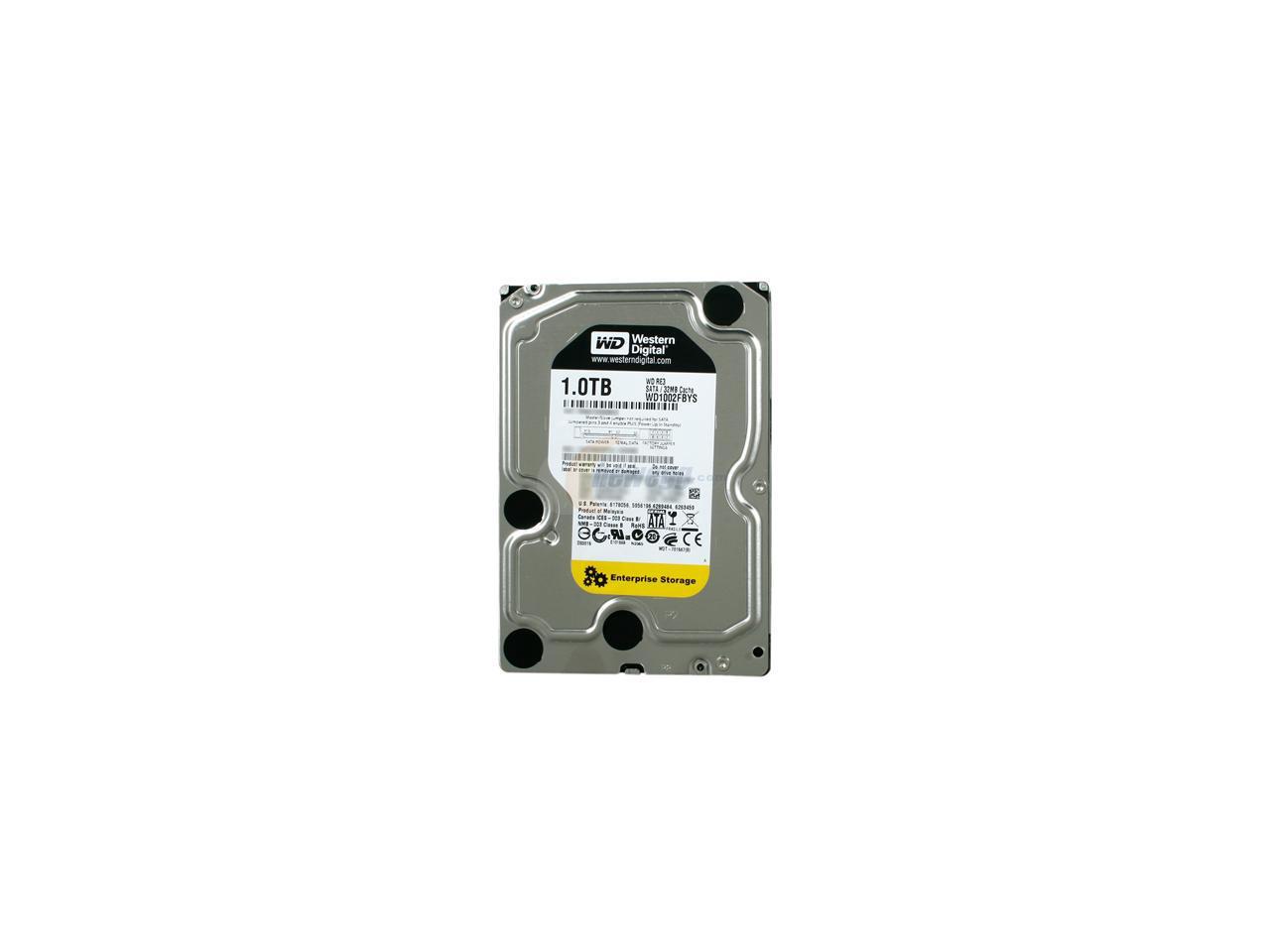 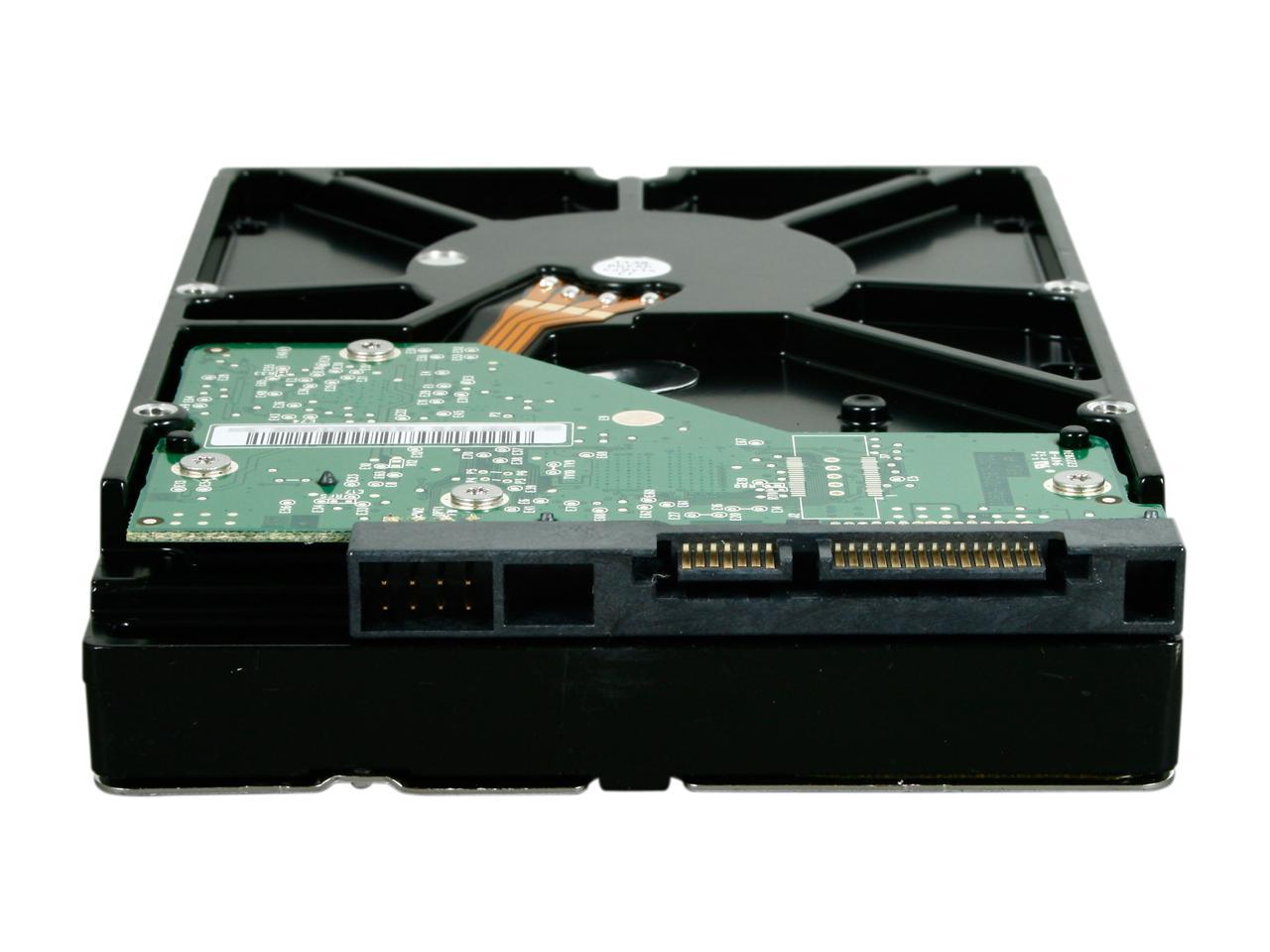 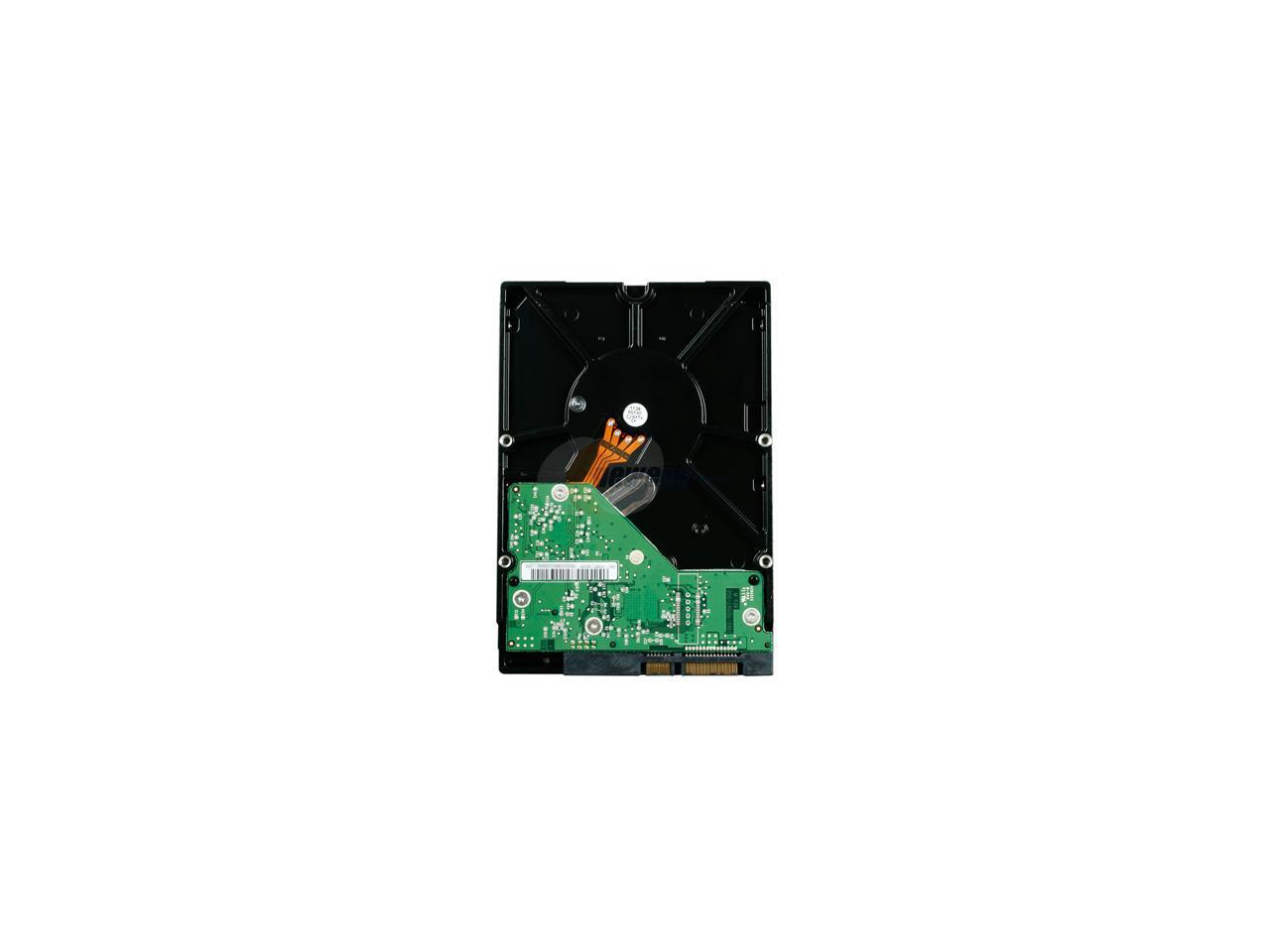 Pros: Update to my earlier review. I initially bought one of these drives along with a cheaper Samsung. My overall experience didn't show much of a difference in my 1 month worth of testing. However, the number of unhappy customers with the Samsung over the course of a year turned me off, even though it's ~ 50% cheaper. I ended up buying 10 additional drives of the WD RE3s for a RAID 6 setup (11 drives total). So far I'm very pleased. Not a single SMART error on any of the 11 drives received. I'm getting 630 MB/s bursts, 521 MB/s average sequential reads, and 7.9 ms random access. This is w/ a 64kB strip size, LBA 64 mode, RAID 6.

Cons: Biggest con is the price - but I guess you get what you pay for (or I hope). Check all of the reviews here on Newegg before making your final decision - for an 11+ drive file server, the drives are by far the largest percentage of the cost, and could also end up being the largest time suck if you end up replacing/rebuilding an array every couple months. In the end the extra cost was worth it for my peace of mind, if nothing else.

Overall Review: It might just be my case (NORCO 20 bay hot swap), but these things start cooking (62+C) during heavy use/intial RAID build. I had to open up the case and stick a large fan in front of it, which brought the temps down into the 50C range. It's going to get worse once I fill it with 9 more drives. For those building a large array, also be prepared for very long build and rebuild times (7 hrs total for the full volume).

Pros: My third update. Adding some power use levels for anyone considering a similar setup. I'm running 11 of these drives in RAID 6 w/ an ARECA 1280 ML. I was concerned about the power draw, especially during spin up. These drives allow a staggered spin up (as long as your host controller also supports it), that remove the high current requirements for a large disk array. I'm currently using a 0.4 second stagger, and the maximum power draw I've recorded (using a KILL A WATT power strip) is 364 Watts (3.2 Amps). I have plenty of power for more drives!

Cons: Price, but it's worth it when reliability is considered.

Overall Review: This system is powered w/ a 750W PC Power & Cooling PSU, in a NORCO 20-bay hotswap case, not using a video card (remote desktop in, this is a server only), Xeon 3220 CPU (similar to Q6600), ARECA 1280-ML RAID controller, Asus P5Q deluxe MB. I was concerend about the power supply being able to handle this many drives based on some of the reviews I'd read elsewhere. As long as you're using the staggered spin up option on the drives, a 750 W PSU is going to be more than enough for a 24 drive RAID array. I hope this review is helpfull for someone else planning an array with alot of drives. I don't know what the sample rate is on the KILL-A-WATT, so I may not be capturing the true max current or power draw, but it's got to be pretty close. If anyone has a power draw during spin up vs. time curve from an O-scope or something similar for one of these hard drives I'd love to see it. As it stands it appears the high current draw during spin up is < 0.4 seconds based on my results.

Pros: We have bought a dozen of these drives over the past year from the Egg and elsewhere. None have failed yet, but that's likely luck. The drives are fairly fast and, when mounted carefully, quiet. Our experience with past WD RE drives has been that they are more reliable than other SATA makes.

Cons: Two systems running Vista x64 had frequent problems when these drives were used in RAID1 and run off of an Intel ICH9R chipset. The chipset would flag a drive as failing. All diagnostic tests proved the drive to be fine. It took rebooting the system with the "failed" drive unplugged for the Intel Raid controller to not see a phantom failure. The same drives work without a hitch on systems with Adaptec RAID controllers, and with a week's use, no weirdness seen on an ICH10R-equipped motherboard. The problem appears to be with the ICH9R chipset rather than the drives, so no egg deduction.

Overall Review: When I mounted a pair of drives into a desktop box and powered up the system it sounded as though there was some primitive farm machinery clattering about inside. The problem turned out to be these WD drives recoil and shake more during seeks than previous, lower capacity models. One drive was not mounted tightly, making a loud clunk whenever the heads moved. Using a set of silicon isolation grommets stopped the banging, and these drives are nicely quiet.

Overall Review: As others have complained the packing was horrible. 2 layers of bubble wrap around the drive, then thrown into a giant empty box to flop around in the delivery truck. Others do such a better job with the air pillow packing. I even paid for Fedex so I would have a better chance of getting the drives in one piece. Newegg is so great otherwise, I just do not understand the lack of shipping quality. Blows my mind...

Pros: Very high transfer rates as other reviewers have already indicated with good data. Lots of Cache. You know you are getting a reliable drive with the RE series from WD. I don't mind paying more money for a drive I can really feel confident in, after all you can make a pretty spendy set of hardware seem pretty useless with a failing drive. What more can you ask for from a 1TB drive then speed and reliability?

Cons: None, I have installed many of these drives and they have each performed as well as the last.

Overall Review: I have built countless PC's over the years and I have seen my fair share of bad hard drives. Everything from the infamous Hitachi Deathstar to the tragic WD JS series. I find it's sometimes hard to find a drive that you are really confident in. I started buying the RE2's last year because of their RAID class reliability. I have yet to see one with any signs of heat damage or major read/write errors much less a bad one. I haven't had as long experience with the RE3's but so far they have been exactly what I would expect from WD RE series HDD's

Pros: Simply outstanding drive. Works with Areca 1680ix with no issues. Very good BER rate and MTBF, only some SAS have better ratings. Fast. Have 5 of these drives mounted in Supermicro SAS/SATA drive cage. Western Digital leads the pack in quality lately.

Cons: Newegg (again) shipped the drive with minimal protection. I'm not going to punish Western Digital for this, but Newegg needs to get a better hard drive shipping policy and quit going on the cheap.

Cons: Only one I can think of is they cost money.

Overall Review: I bought 20 of these for my RAID-6 array. All arrived and worked out of the box flawless. I was debating between the Seagate and WD Enterprise drives and My first instinct is always with WD. Not one bad block in all 18TB! Running great!

Cons: WD has QA or shipping problems. I ordered 4 of these drives and 2 of them were bad (1 DOA, 1 infant failure after only a few weeks). The 2 bad drives are separately reviewed, this review covers the 4 working drives, for which 5 Stars is valid.

Overall Review: Be prepared to act like Western Digital's QA department and reject some percentage of the drives. These are supposed to be Enterprise class drives with initial burn-in testing, etc. but the reject rate including other reviewer results is far too high. When you do eventually get good drives they are *very* good.