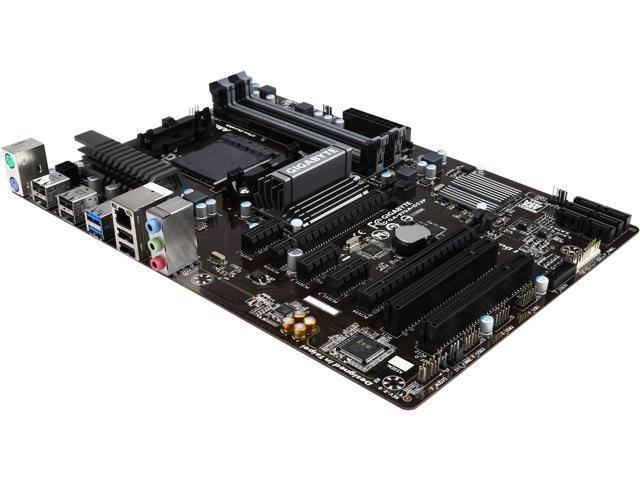 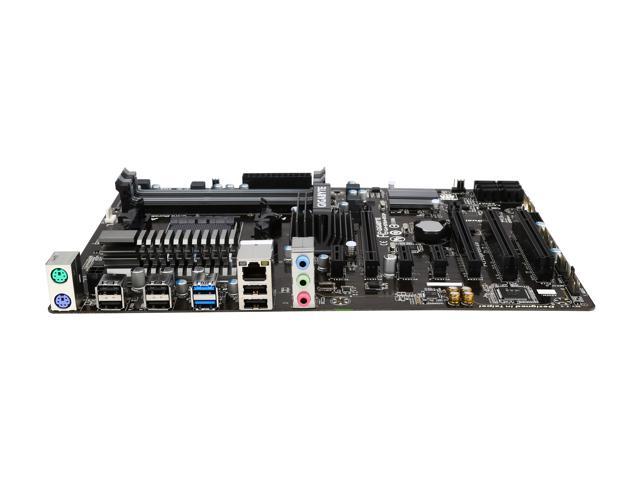 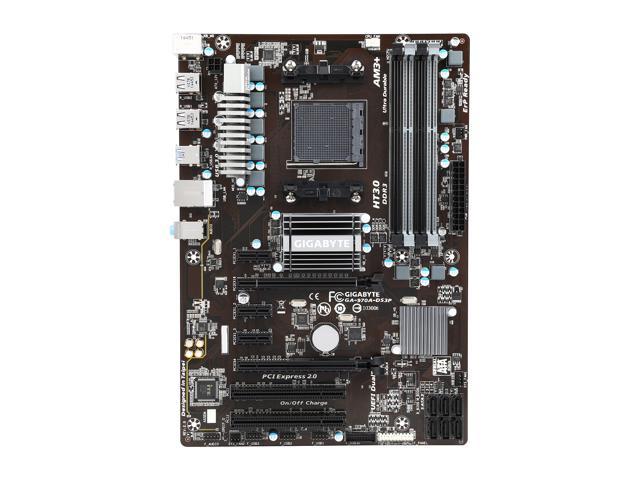 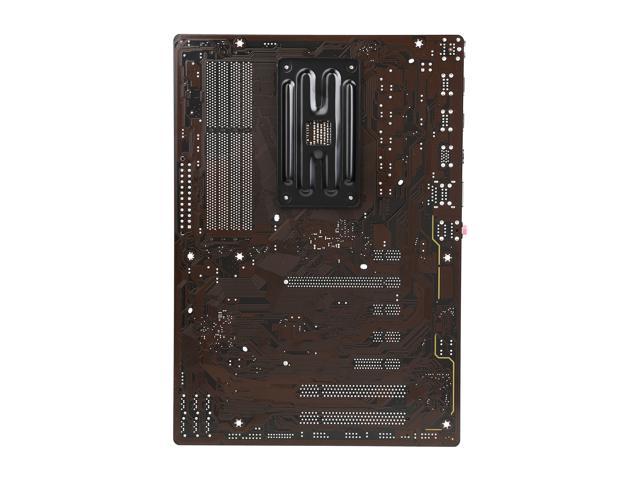 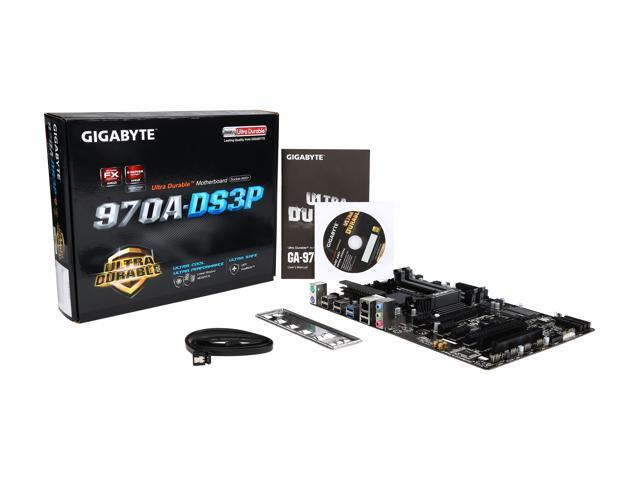 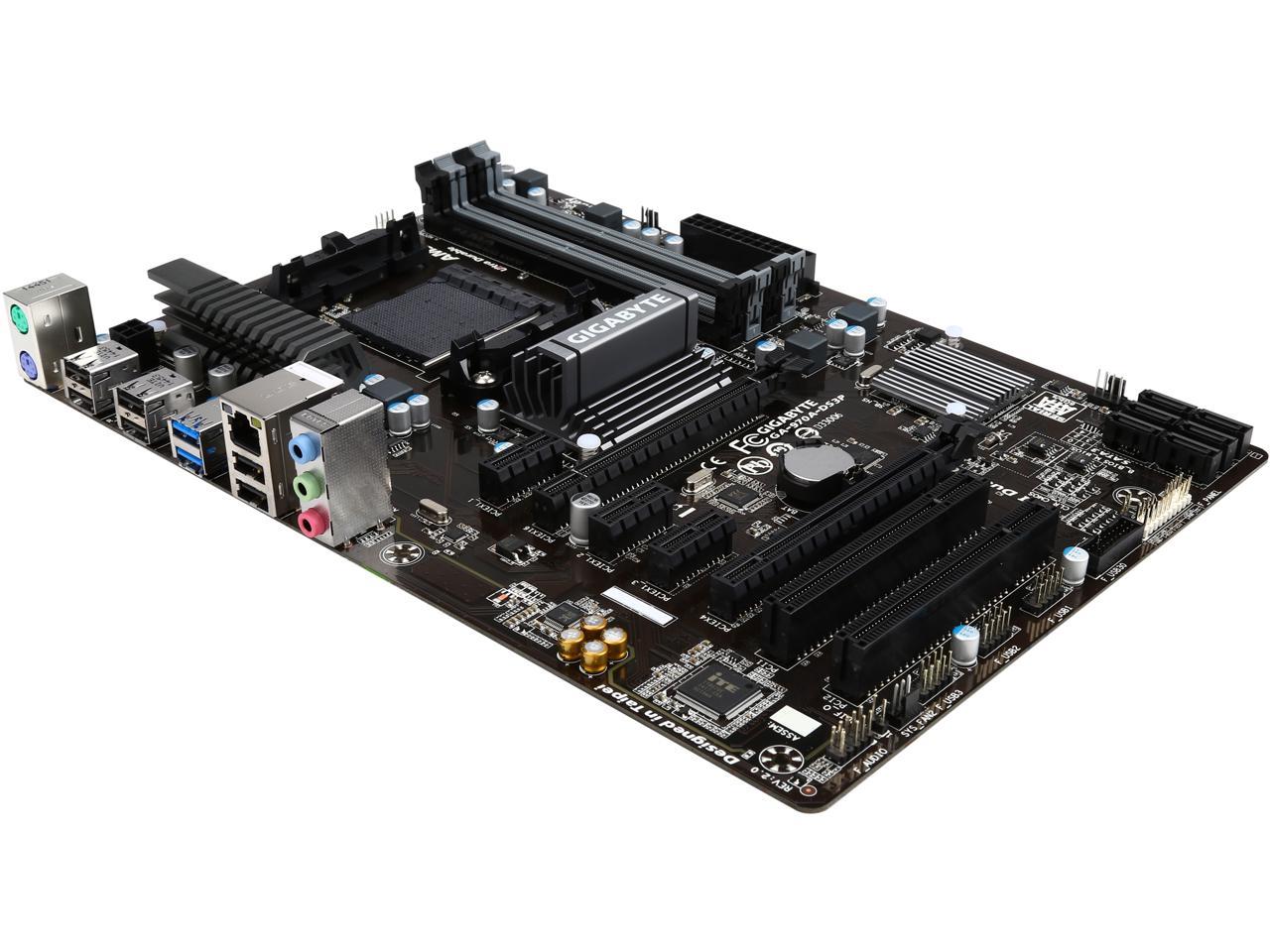 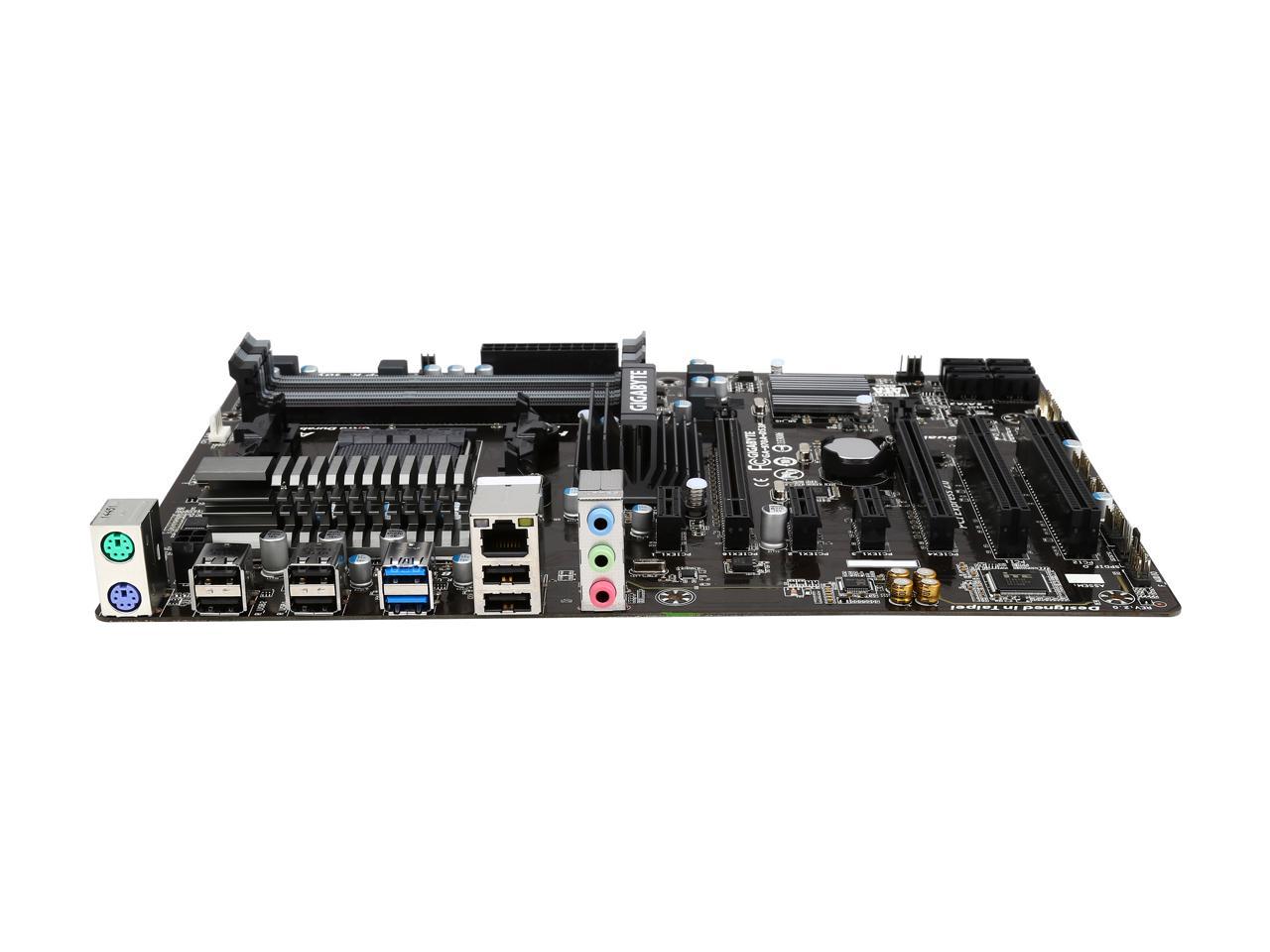 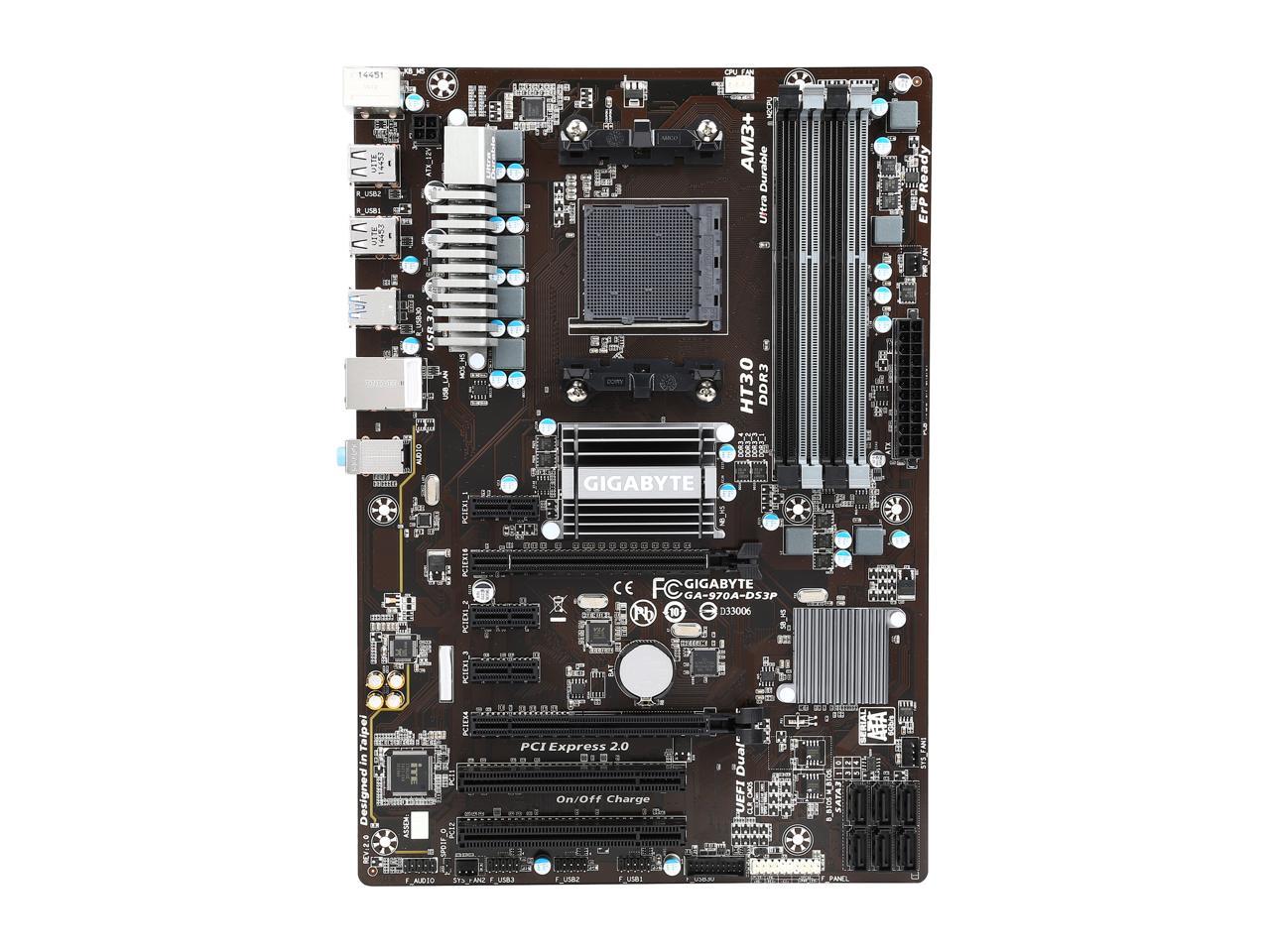 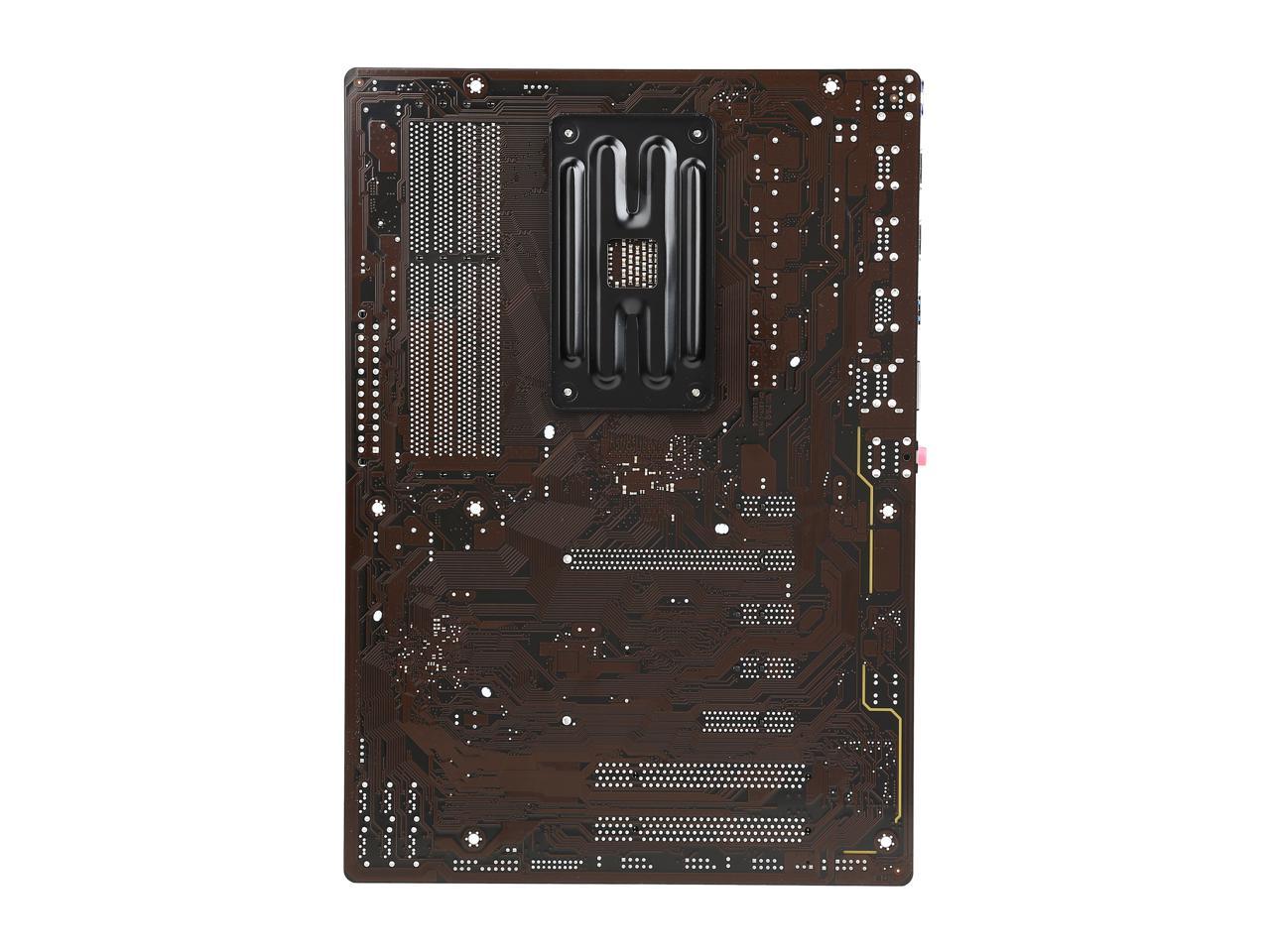 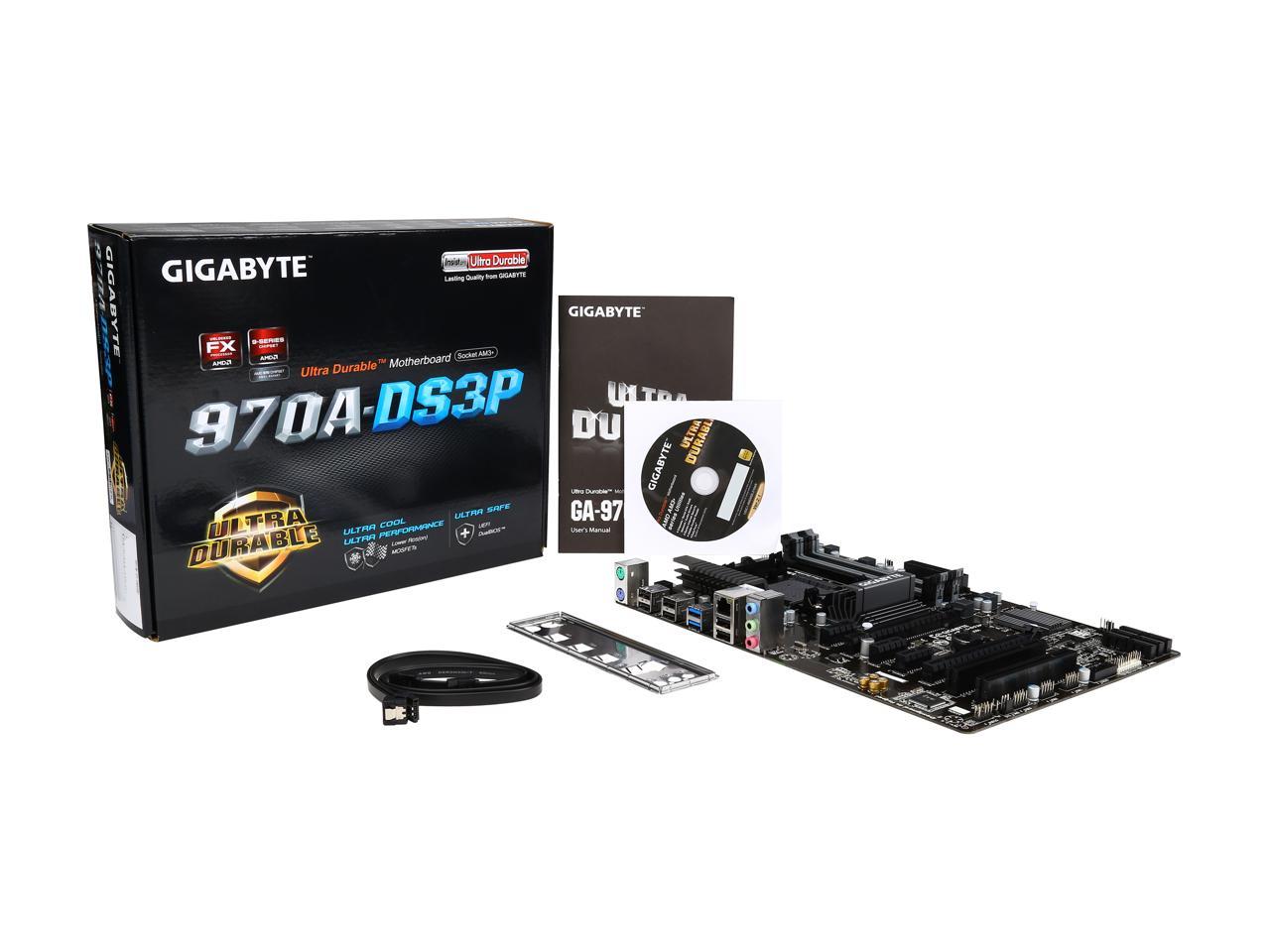 (267)(1) Write a Review
See more "am3 motherboard"
In stock.
Ships from China.
Most customers receive within 4-22 days.
Overview
Specs
Reviews Powered by AMD 970 north bridge and AMD SB950 south bridge, this motherboard supports AMD AM3+ FX/AM3 series CPUs, and features two PCIe x16 slots with 2-way CrossFire support for scalable graphics performance based on your needs. The Gigabyte exclusive Ultra Durable technology utilizes a range of features and components to ensure maximum durability, reliability and protection against humidity, power surges, electrostatic discharge, and even BIOS failure. The high quality audio capacitors and dedicated audio hardware separation bring onboard audio far beyond your expectation. The USB 3.0 and SATA III deliver blazing-fast data transfer rate. Best of all, this model supports ErP Lot 6 environmental regulations, so you can experience the performance and features in a more eco-friendly way. GIGABYTE motherboards feature GIGABYTE DualBIOS, an exclusive technology from GIGABYTE that protects arguably one of your PC's most crucial components, the BIOS. GIGABYTE DualBIOS means that your motherboard has both a 'Main BIOS' and a 'Backup BIOS', making users protected from BIOS failure due to virus attack, hardware malfunction, improper OC settings or power failure during the update process. Overall Review: UPDATE: I am a Computer Tech. To this day I purchase this Motherboard. It is rock solid! I have at least 30 of them with my customers. I use to put together Phenom ii x 4 965 Black Editions, now I use the FX's CPU's. They are dependable. I read some of these reviews and I think these people must be AMD Haters. If you are on a budget and need quality and fast performance use this MoBo with a FX Series CPU. Talk about blink, blink, blink. No circle of doom!

Andrew S.
Ownership: 1 month to 1 year
Verified Owner
- A nice, older motherboard (new version though) that arrived reasonably promptly from the other side of the world.1/1/2019 6:37:06 PM

Pros: - My old AMD FX system has now roared back to life!

Cons: - The USB 2 ports do not work which is a bit of a pain, but the USB 3 ports (of which there are 4) work well enough. Google seems to indicate this is not an isolated issue. Only reason I have dropped 1 'egg' from this review and this is no fault of the seller...

Overall Review: - It is a difficult choice when considering whether to resurrect an older system as I have done or simply junk the old system and start afresh. The extortionate prices of RAM and graphics card at the end of 2018 decided the issue for me and I have had no regrets so far.

Pros: -Price, I got it for $74.99 USD. -Backwards compatible with the Athlon II and Phenom II model CPU's, since I still have an Athlon II 640 and a Phenom II 965 BE CPU as spares, But able to handle the FX 6120 I picked up for $20 USD off my oldest kid to give to my youngest. -Has plenty of legacy support for the PCI interface, which affects me because I use 2 PCI devices, 1 sound card and 1 wireless adapter.

Cons: -First one came in DOA, this is part of the reason for the 2 egg rating. (this issue will be covered in the optional comments section. (Main reason for the 2 egg rating) -The heat sinks on both the VRM and North Bridge are lightly mounted with springs and move very readily. This causes great concern with there ability to be able to sufficiently cool the components. (part of the 2 egg rating) -Only supports 5.1 and 7.1 surround sound through the optical out port which forces the need for other equipment. (That is a receiver BTW.) In my case this is not needed as I have a Creative sound card so this did not affect me but will other people. -Thin PCB. This is a very thin board so you must handle with kid gloves on to not hurt the board by just moving it. The first one crackled as I took it out of the anti-static bag it was shipped in, definitely does not give the impression of quality. (part of the 2 egg rating) -The mounting hole for the upper right hand mount is located so close to the ram locking tabs that I had difficulties getting that screw in. Case is an older Antec 902 that I gave to my youngest kid for a case. I needed to use an 18" long screwdriver to mount this screw because of the top edge of the case would be in the way of a standard length screw driver's handle and the ram lock tab issue making for a bad angle at the head of the screw. Being a mechanic I had one handy but come on Gigabyte, think about placement of these things. (part of the 2 egg rating)

Overall Review: DOA issue: After receiving the first board I built the system and the trouble code indicated issues with the GPU. I tried 3 known good GPU's in it with the same error, 1x BFG Nvidia 9800GTX+ (yes it is still kicking and doing good), 1x Saphire Radeon 4870 (yes this one too is still kicking and doing well) and finally took one of the GPU's out of my gaming rig a Asus R9 280 CUII top edition and all had the same issue. The CPU, a FX 6120, is known good because I had it in my gaming rig before upgrading to a FX 8350 for myself. The ram was tested in my system and was proven to be stable. (New and ordered at the same time G.Skill Ripjaws X, F3-14900CL9D-8GBXL) The PSU is known good but tested the board with a different PSU to be sure. There was no 2 ways about it the board arrived dead. This is not Newegg's fault but is a quality issue with Gigabyte. Buyer be ware of this product. Knowing that this motherboard was prone to issues, just read other reviews of this board (I have seen issues with this board over in TomsHardware forums where I'm a regular so I knew I was buying a problematic board), I ordered it just before December to rebuild my kids PC to give time to get a bad one in and ship it back and be able to get one sent back to me to have it before Christmas for her present. I find it sad that the consumer has to think this way to assure a good product as a present for someone. The reason for buying this board was the one that was originally installed, AsRock A770DE+, had the VRM mosfets start to overheat and melt the PCB. At the time a Phenom II 965 BE was installed and only had DDR2 memory installed @1066MHz. I refuse to pay $200+ for an AM3+ motherboard that is out of production so I chose the $75 USD Gigabyte option over the Asus options available because I have seen more issues with the Asus options Newegg had then the Gigabyte board in the $150 price range. Picked the best of the evils I guess. At the time of this writing the new board is in and being stress tested for stability and I will update this post with the results and if it fails within the warranty period.

Overall Review: I bought this board 1 year 2 months ago. The board has been reliable. I'm running an FX 6300 + windows 10. This board always works and starts right up. I've put this board under some pretty heavy duty use and it still clicks along. The board has exhibited a couple strange behaviors. The USB 3.0 ports (not the 2.0) seem glitchy, I'm not sure if this is the chipset either but yeah the 3.0 ports seem weak however they do work. I put a USB 3.0 port card in, problem solved. I've gotten the message at boot a few times "bios is being restored from backup" which is kind of odd. Message goes away and board keeps trucking. Bottom line is the board always boots. I have a ton of stuff plugged into this board, it all works.

Pros: Have AMD FX-8350 Black Edition, motherboard is in older edition Antec 900 case, running G. Skill F3-12800CL9D-8GBRL (2 x 4GB) memory. Currently, running PNY GeForce GT 710 graphics card. Running Windows 10 Pro. No issues and compatibility. Sept 3, 2018 - Update, had an issue with the Gigabyte motherboard freezing up and shutdown. The issue was not the board; but, the power supply, which was a little older unit. I also, increased the memory from 8 gig to 16 gigusing G.Skill Sniper Gaming Series DDR3 1600 memory. In addition, pulled the CPU cooler and replaced it with Cooler Master Hyper 212 LED Turbo with Black Cover, with dual 120 mm fans, dropped the temps significantly. The Cooler Master has maybe little less than an inch clearance from the Antec 900 side panel.

Overall Review: Recommend this board - YES! I finally, with the available time, assemble 2nd Gigabyte GA-970A-DS3P motherboard, with same processor as the first one. Running G. Skill Ripjaws X Series DDR3 1600, 4 sticks 8 Gig each. Running Windows 10 Pro with PNY SSD. This board was a replacement for my older ASRock H77M which crashed. It took a 10th to load windows and the required software. More to follow. This another posting, since Windows 7 is going away next year. I purchase 3rd Gigabyte GA-970-DS3P motherboard with 32 gig G Skill, FX-8350, using a Noctua NH-U9S CPU Cooler, Corsair 750 watt power supply and MSI Radeon RX 570 8G OC graphics card, running Windows 10 Pro. Love the Gigabyte board!

Pros: worked great out of the box. working great with a 8350 and 2 gpu

Cons: none so far. havent tried risers yet.

Pros: no problem with this board support my cpu,memory, better than my old foxconn

Cons: need to install first memory if u have hyper 212 plus heatsink or similar. memory banks to close.

Pros: Board was very easy to work with. Even for a first time builder it was nice. Most all of the dos settings were correct right away, just had to switch around the boot order. Loaded windows 10 with no issues. There is a setting in the dos menu for what os you are loading, windows 10 is not on the list but I just set in on "other" and it worked no problem. So far I am very happy!!!

Cons: None so far. Not sure how much abuse it can take from o.c. but I'm not going to push it too hard being everything is working very well the way it is. I see some people had bad luck with bad boards out of the box which had me worried but mine must be a good one. I would defiantly recommend it for a very good budget build!