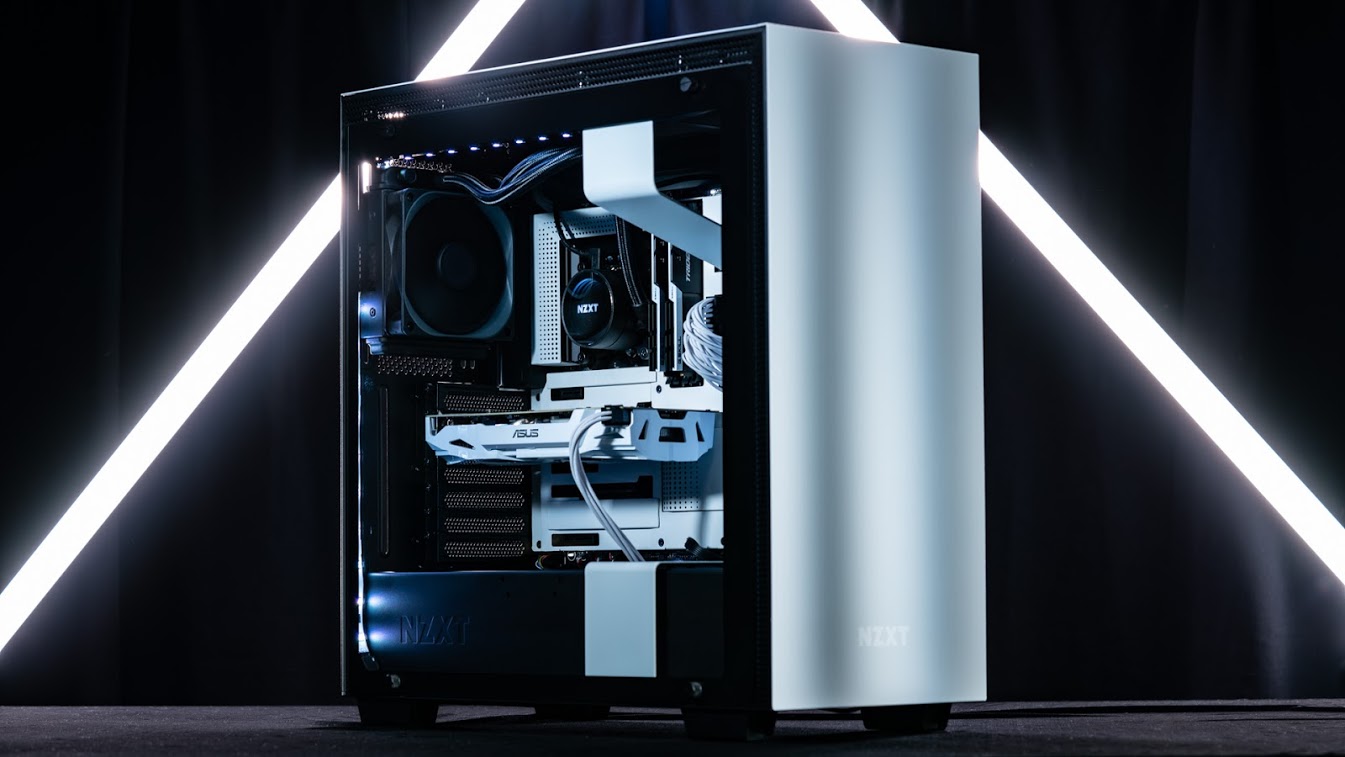 Thinking about your next top-of-the-line gaming PC? Of course you are. Why else would you be here? You can browse Newegg’s entire range of computer cases to find the one that’s right for you, but there’s a good chance if you’re reading this article you’re interested in something special.

Here are 10 of our picks for PC cases that are guaranteed to make eyes pop and heads turn. What you put in them is up to you.

(But it should probably be, you know, computer parts.) 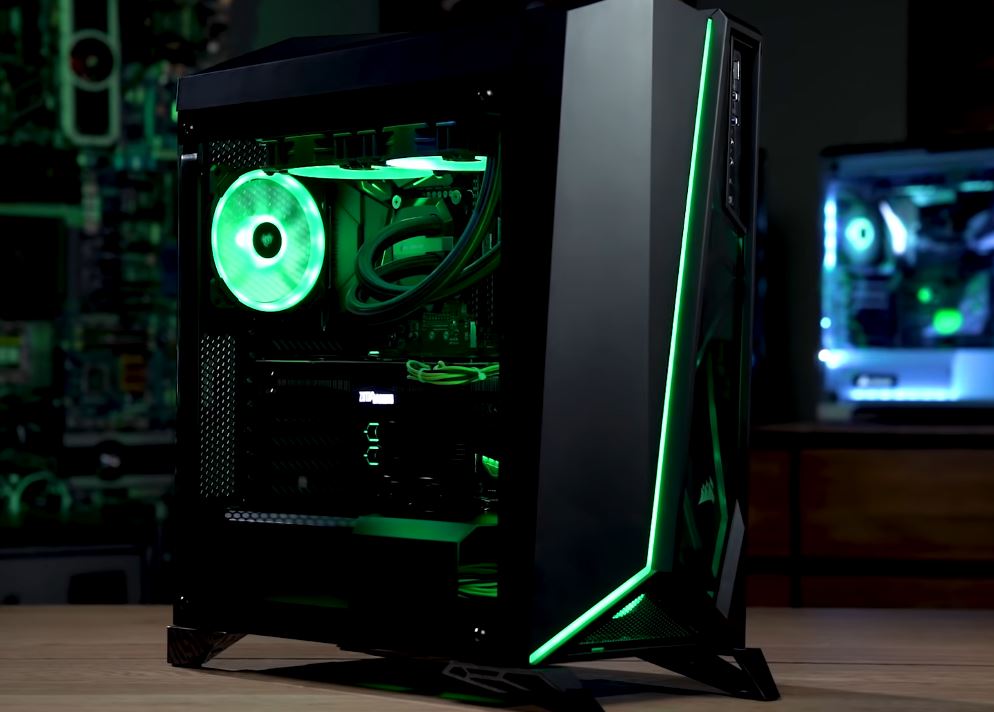 Okay, I admit it. I’m a little biased here because I did a sweet build in one of these back when the Nvidia RTX 2080 launched. It’s a solid ATX case, but it’s a little tight and there’s no shame in scaling down to an mATX board for this guy.

This RGB version of the SPEC OMEGA has a full RGB front strip and two full RGB fans built in, and is also available in white. There’s also the non-RGB versions of the SPEC-OMEGA if you’re an RGB-hating plebeian. (Or if you’re just really, really into red.) 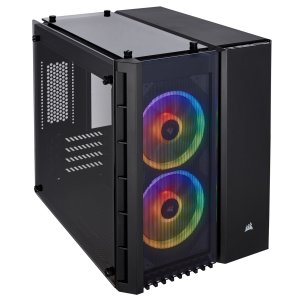 Real-talk: Corsair is going to show up on this list a few times, because honestly they’re just killing it right now in terms of chassis design.

If you’re looking for style in a small package, it’s hard to go wrong with our number 9, which is purpose built for MicroATX boards. 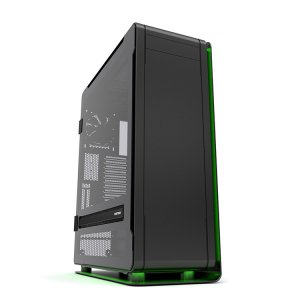 If you’re already an experienced builder, you probably know the Phanteks Enthoo Elite is probably one the least surprising picks on this list.

This case has been around for a hot minute, and has a reputation for its price and sheer size. Both are well worth it when you consider how attractive, and how well put together it is. Plus, that spaciousness is an upside if you’re going with custom water cooling, and it’s got loads of other features pro builders want. 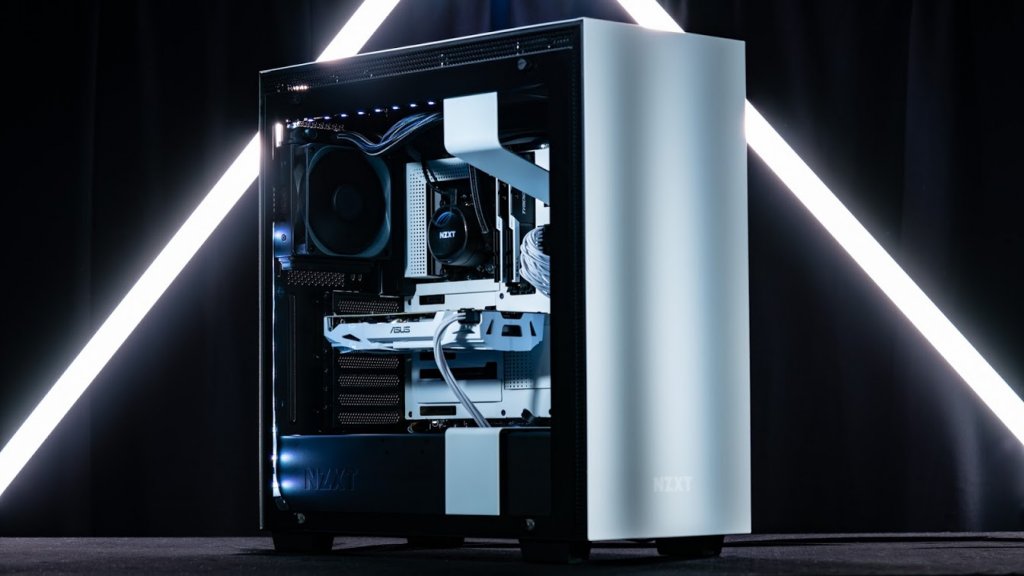 NZXT has its design language nailed down like nobody’s business. If you want clean, sharp lines and bold yet minimalist color palettes, you go NZXT, end of story.

The H700 is an outstanding case on its own, but what’s really amazing is how many variations of it there are, each of which look fantastic. NZXT has also teamed-up with publishers, developers and streamers, which has resulted in some limited-edition art versions of the H700, like these PUBG, Fallout, and Ninja versions. 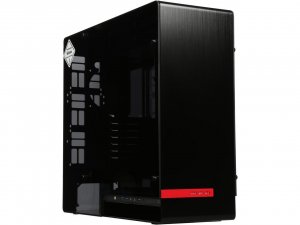 In any list of high-end PC cases, you can’t leave out In Win. They’re known for both economical, practical chassis and designs that can border on modern art. Their 909 case is a bit of both, since it incorporates thoughtful attention to detail that builders will appreciate, and some bold aesthetic touches.

The 909 is notable for giving just as much attention to the rear panel as all its other sides. There’s an additional chamber to the west of the motherboard where most cases end, which has space for rear I/O cable management and mounting points for an additional 3-fan radiator. The bottom front “foot” has some unique geometry around the front I/O panel, and matching tempered glass. 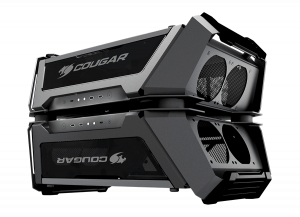 At first glance, the Gemini X case from Cougar looks at odds with the rest of the tall, squarish cases on this list. It’s got some weird angles. It looks like it has a mirror version of itself grafted on. It looks more like a F2P loot-box than a PC case. But all of that can be explained with three words: Dual system chassis. Yup, the Cougar Gemini X can hold enough parts for two computers in its confines: one full-sized ATX system, and a secondary mini-ITX based PC.

Cougar makes it clear that they intend the secondary PC in the system to be used by streamers as dedicated broadcasting hardware, to take the strain of outputting the stream off of the primary gaming PC. But there are also some interesting professional use-cases we can think of. For example, a software developer could use the secondary system as a sandbox or testbed for testing applications in an isolated environment. Similarly, a video editor could have the second PC act as a dedicated render node for exported video without putting additional strain on their main editing rig. There’s a lot of potential for a dual system build like this, and it’ll be exciting to see what people do with it. 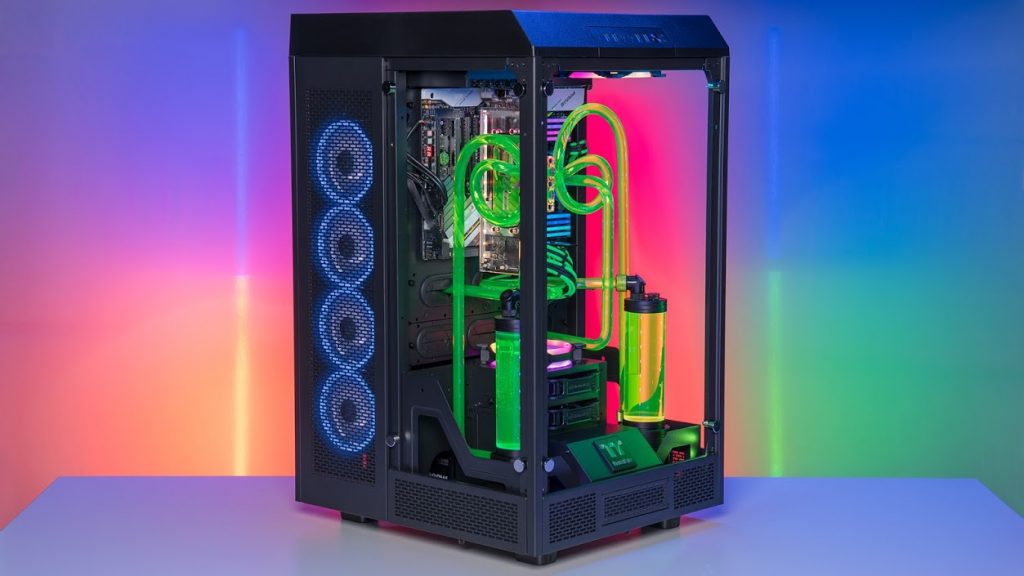 There are a few cases on here that qualify as big, but none of them really claim the heavyweight title like the Tower 900. I don’t think any other case offers quite as much raw building space as this guy.

You want dual-loop cooling? The Tower 900 has two 480mm radiator mounting points, space for two big reservoirs, and can accommodate the longest PSUs on the market. The space in the back can also fit hard drives, RGB fan controllers, and meters of cable (and cable management). I literally cannot conceive of a single-board workstation or gaming PC that couldn’t fit in this chassis. 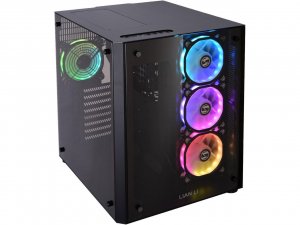 Lian-Li was little known up until the past few years, but they’ve taken the world of chassis design by storm. The top end of their lineup is all gorgeous cases like the PCO8RGB pictured here, which put the motherboard and GPU assembly on display through tempered glass.

A secondary chamber holds all the cables and chaos of the PSU. 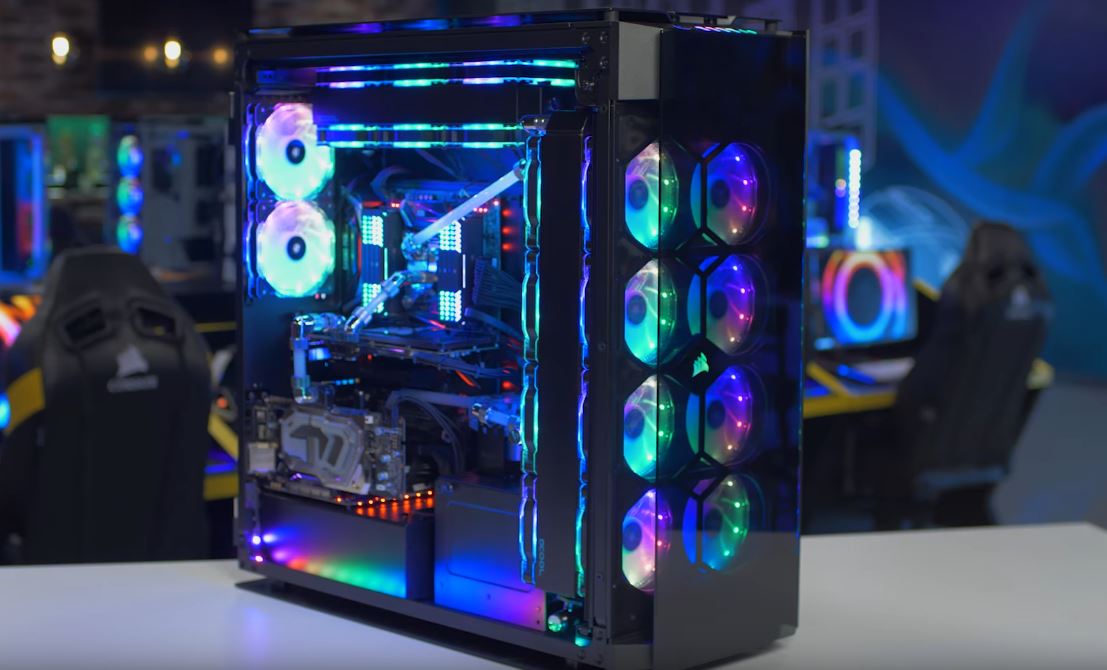 We’ve already said we’re fans of Corsair, and the Obsidian 1000D is just more of everything we love about them. This is another contender for the “crazy big” crown.

The Obsidian has two 480mm fan mounts on the front panel. It’s so wide the the PCIe bracket is squarely in the middle of the rear panel. Inverse from the motherboard, there are two doors that open up to accommodate more SSD mounting points.

Oh, and alongside your main ATX-based system, the Obsidian can fit a secondary system with an ITX mobo and an SFX power supply, for video streaming purposes or just for bragging rights. 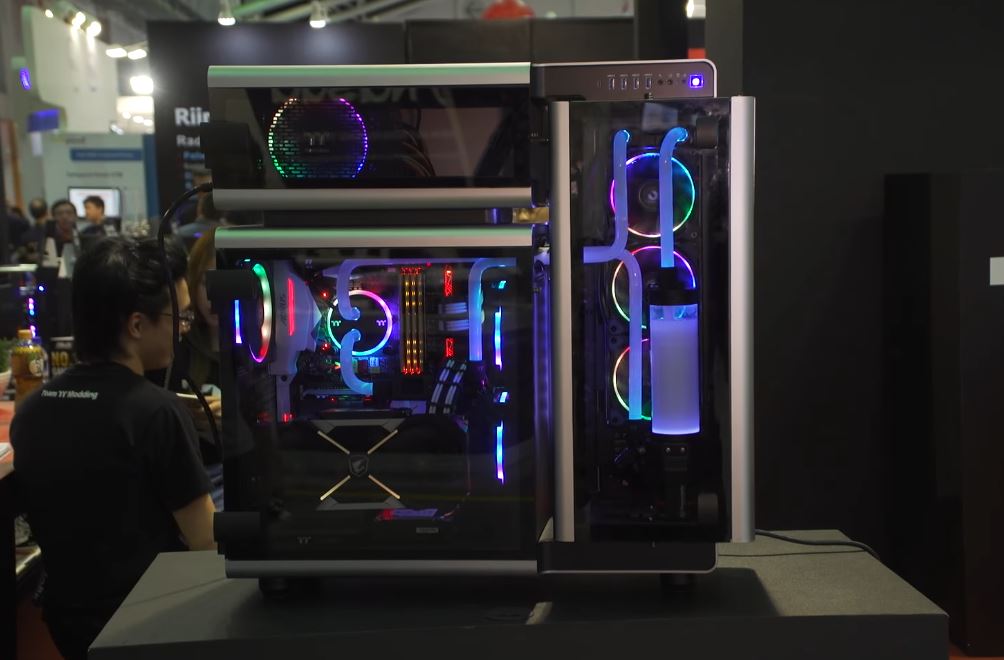 We’ve got a lot of big cases on this list, and we’ve got a lot of pretty cases on this list, but the Level 20 from Thermaltake is really, really big, and really, really pretty. Admittedly, this kind of compartmentalized design isn’t for everyone, but in my opinion this thing is a work of art almost all by itself. Never mind when it’s packed full of custom liquid tubing and enough RGB to blind somebody.

This bad boy puts every component of your build on display and can hold every reservoir, radiator, fitting, and water block you can throw at it. This case even goes big with the RGB, since its included RGB fans are compatible not only with TT’s RGB software, but also Razer’s Chroma SDK and…even Amazon Alexa! So yeah, Thermaltake takes home the gold not just because they made this big, beautiful case, but also because they play well with others. 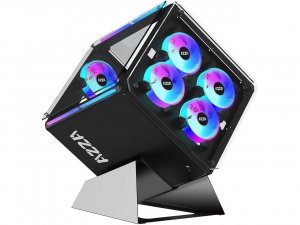 These last two cases were originally included in the list above, but sold out before we could publish!

I’m not really sure what to even say about this one. If you’re into the idea of rejecting traditional notions of horizontality and verticality, check out the AZZA 802.

If nothing else, it’s got RGB striping and fans, so you can get your lightshow on. It also looks like you can pop the main box off of its  stand and use it as a more normal, flat chassis. 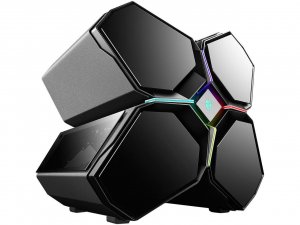 This is another one for the highly alternative category. Each of the Quadstellar’s segments is an independent chamber with a specific purpose. One chamber (plus the center) is for the the motherboard, RAM, CPU, etc. You’ve got one for GPUs, (6 slots worth) one for the PSU and main cable bundle, and one with bays for 9 3.5” drives.

For more, check out our list of the craziest cases on Newegg  or browse all the cases available on Newegg.com.