The 10 weirdest keyboards on Newegg 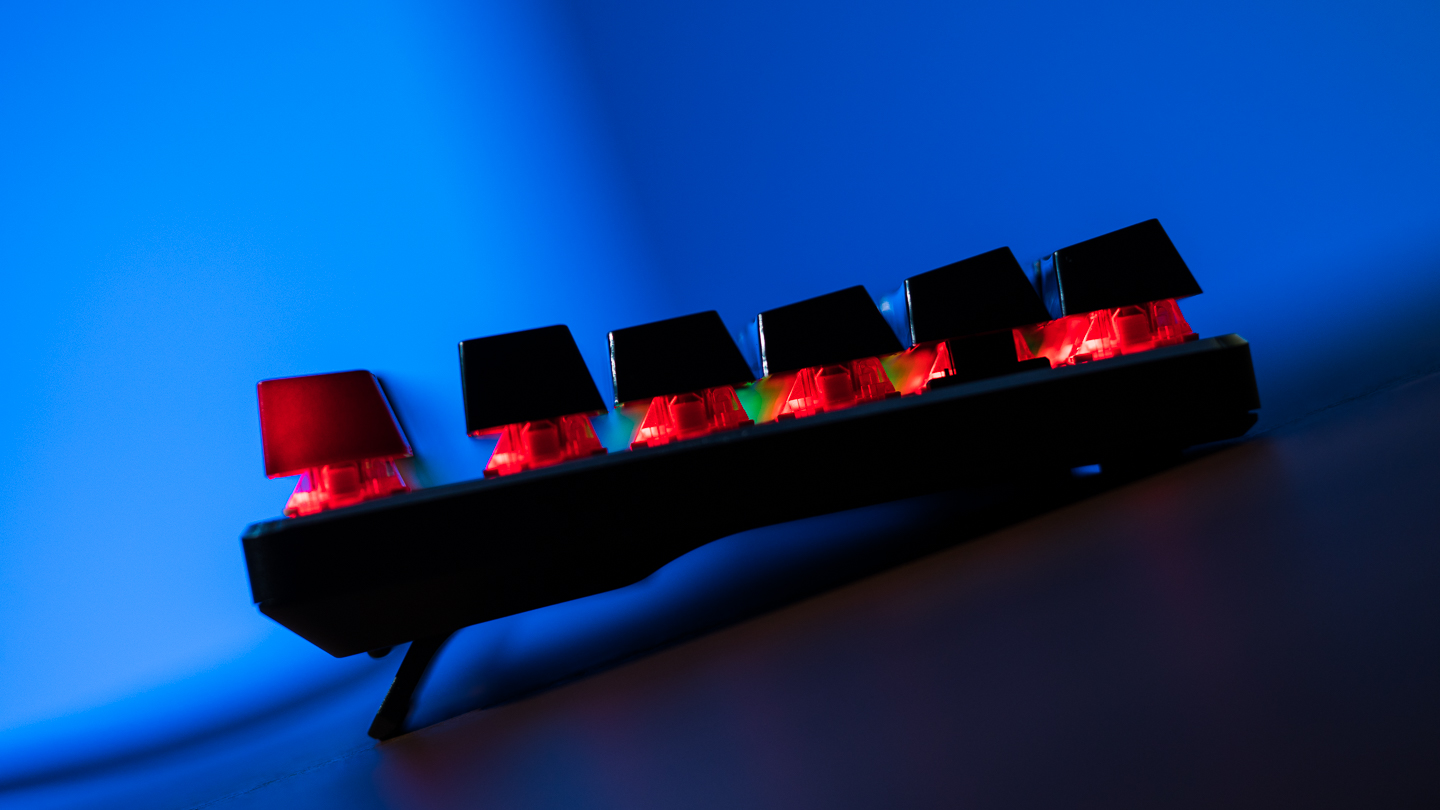 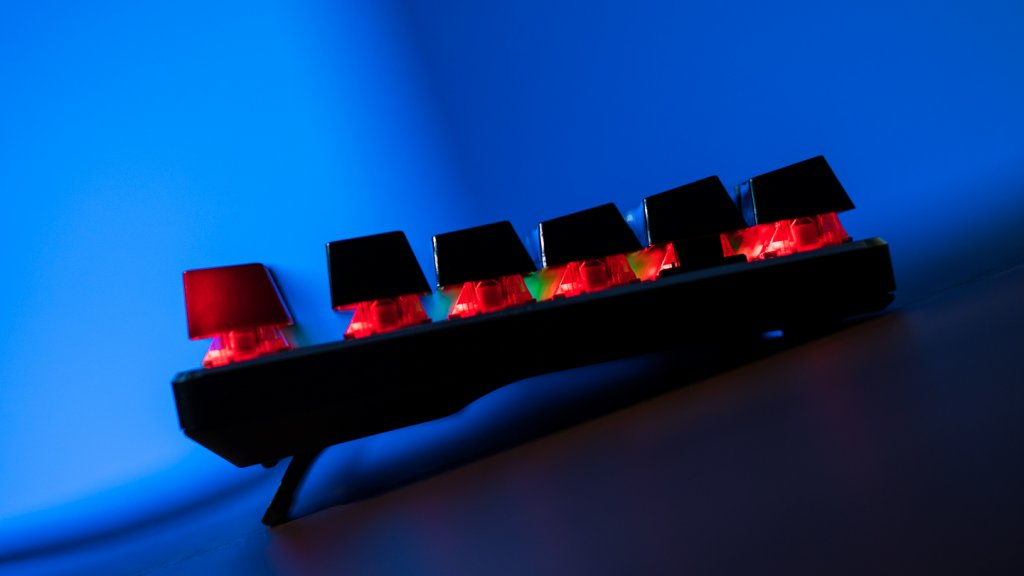 There’s a seemingly infinite variety of options out there, from tiny to enormous, from membrane to mechanical, from office to gaming, and just about everything in between.

Every brand puts their own spin on how a keyboard should look and feel, and that fierce competition results in some truly interesting designs. We sell a LOT of keyboards here at Newegg, and we thought we’d seen it all. But even we are frequently surprised by the ingenuity that goes into some of these critical peripherals.

That’s why we thought it would be interesting to gather together some of the most distinct, out-there keyboard designs, and break down what exactly sets them apart and makes them special. 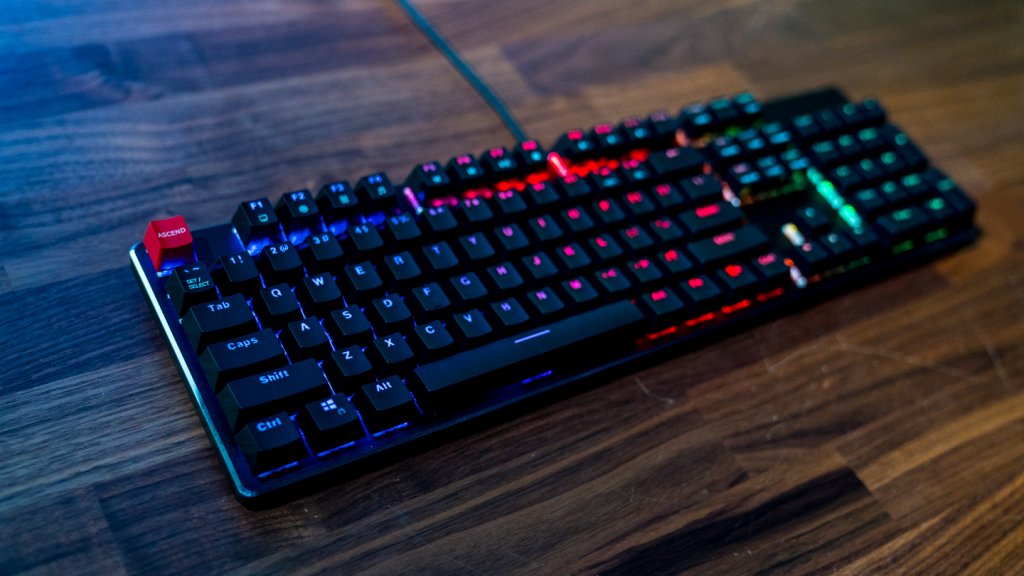 At first glance, other than the ambitious name, nothing about this keyboard sticks out as particularly odd. It’s a nicely designed, minimalist deck, but other than the red ASCEND escape button, the Glorious Modular mechanical keyboard seems fairly straightforward.

Look closer though, and you’ll see there’s quite a lot going on underneath the surface. The word “modular” in the name is a huge hint; this keyboard is designed so that you can easily replace the switches. Not simply the key caps mind you, that’s not at all uncommon, we’re talking about the switches themselves. Want to go from Gateron Clear to Cherry Red? No problem. Want your WASD to have a different clickfeel then your number pad? You got it. No soldering expertise required.

This is very clearly a keyboard for enthusiasts. Not everyone cares enough to swap out their switches, but for those who do, the Glorious Modular Mechanical Gaming Keyboard is the perfect kind of weird.

Maybe weird isn’t the right word for the Ducky 3084, but there’s no doubt it’s a far cry from the standard office keyboard. The 3084 has 84 keys, and comes in pastel color options like Mint Green and Sakura Pink in addition to a more straightforward black.

One of its most noticeable characteristics, other than the compact layout, is the lack of printed labels on the PBT keycaps. Instead, the letters are located on the sides of the keys, which provides a very satisfying uniformity when viewed from above.

The high build quality of the Ducky 3084 (like a detachable USB cable and Cherry switches) make it clear this is a premium deck, and the playful colors and unconventional design are perfect for a company called Ducky. 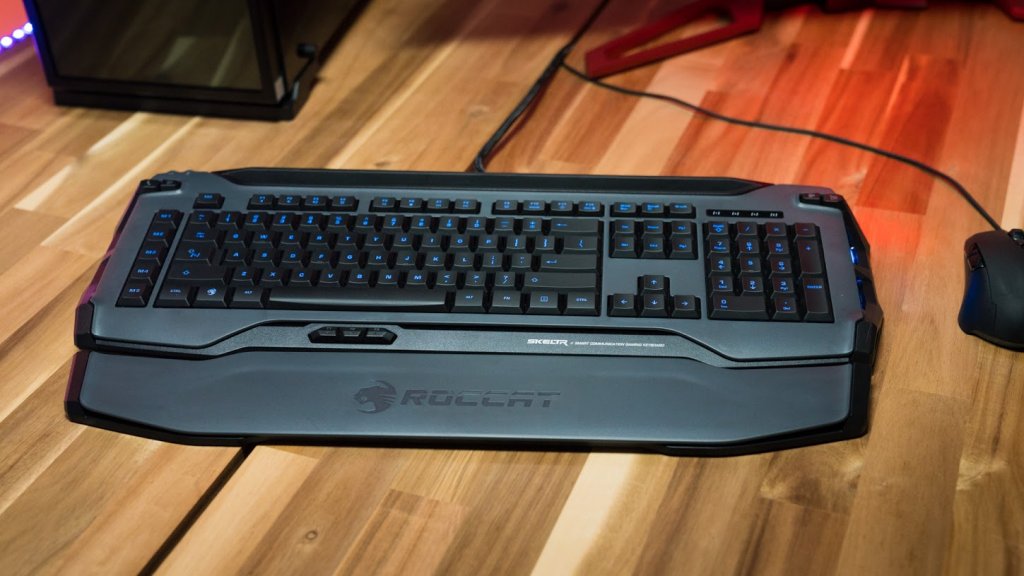 There’s no question ROCCAT makes some killer keyboards, like the Vulcan 100 and the Suora. Then there’s the SKELTR, which stands out from the family in a few dramatic ways.

It’s got everything you’d expect from a ROCCAT keyboard, but the emphasis on smartphone connectivity is definitely unusual. There’s a slot designed for a phone or a tablet on the top of the keyboard, and it allows you to charge your phone, use the keyboard to respond to messages with the touch of a button, or even manage your calls.

For a certain type of user, this could actually be a very efficient best of both worlds scenario. As strictly a keyboard though, there’s no doubt the SKELTR will raise some eyebrows with its unconventional design and emphasis on connectivity over traditional looks. 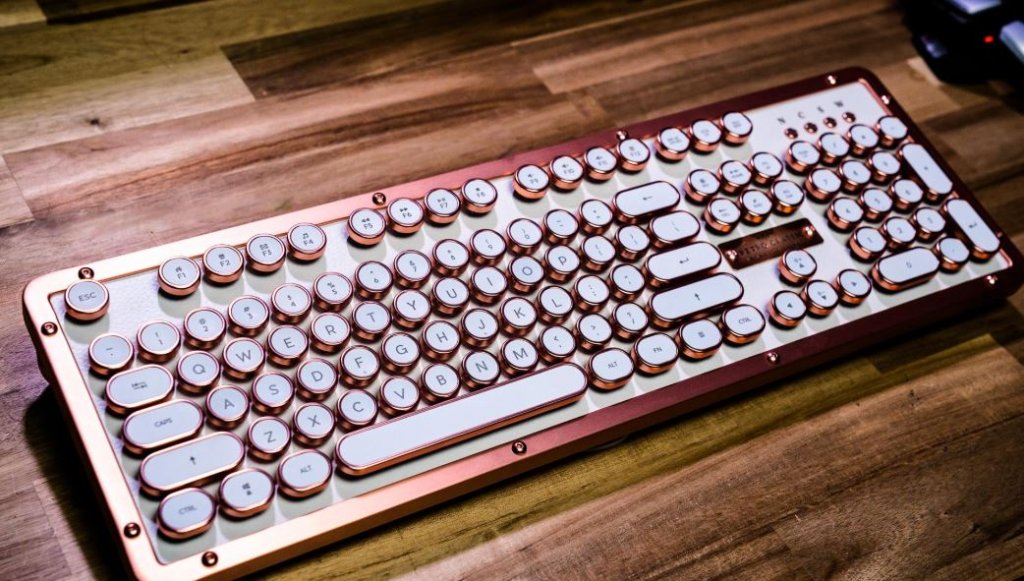 Ever wanted a keyboard that screams “typewriter in an opulent Parisian palace?” For the four of you who answered with an enthusiastic “Oui!” Azio has you covered.

There’s no question this is an unconventional keyboard design, and though you can also get it in not quite so brazen options (like simple black, or copper and black,) it’s going to make a statement regardless. The Azio Retro is clearly designed to emulate a typewriter, which is a neat concept, and it doesn’t just look fancy. The lighting is stellar, the braided USB cable feels great; every part of this keyboard feels all around well-built.

This couldn’t be more NOT a gaming keyboard, but it’s surprisingly gamer friendly. The switches are very responsive, and adjusting to the unconventional keycaps, was much easier than I thought it would be.

The Azio Retro line has style and flash to go around, and is perfect for the aspiring courtier within.

In what is essentially the polar opposite of the Azio Retro, this Bloody gaming keyboard has embraced the “gamer” aesthetic with unapologetic enthusiasm.

From the bright orange silicone keycaps to the different colored rows of lighting, it’s very clear who the target demographic is for the Bloody B740A. It’s an undeniably bold design choice, and though I’m sure it will click with someone who really enjoys that aggressive aesthetic, it’s sure to draw attention from pretty much anyone.

What’s really interesting here though, looks aside, is the optical Light Strike switches inside the B470A. These switches use infrared instead of mechanical contacts in order to increase response time.

If typing quickly is your priority, the B740A could be a great option. 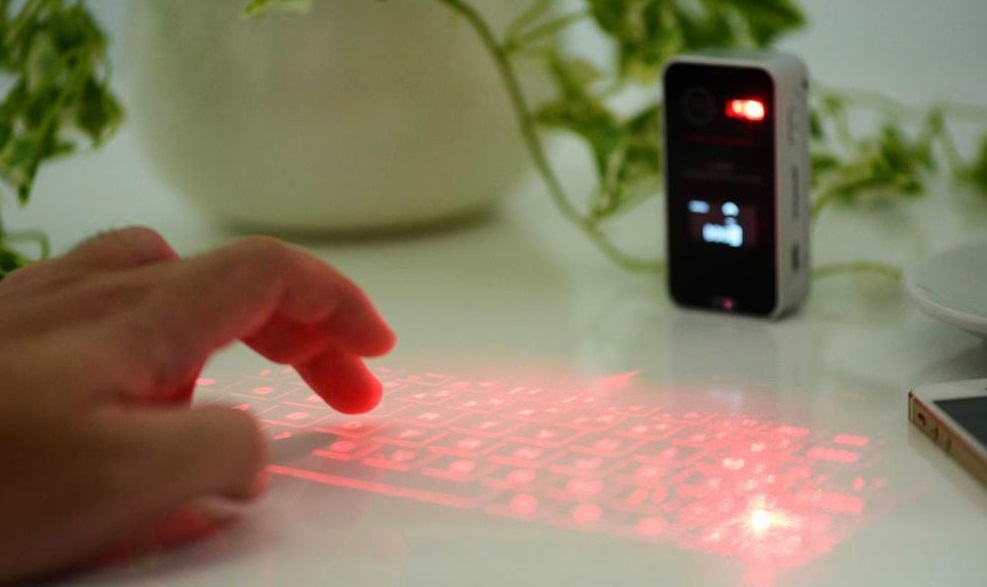 The idea here is that a keyboard is projected onto a flat surface. When typing, your fingers interrupt the beam, and that is interpreted by the projection as a keystroke. This essentially means any surface can become an impromptu keyboard, which not only sounds super cool, but could theoretically change the way we think of keyboards and interact with technology.

There are switches that use optical sensors, as mentioned above, but an entire keyboard made out of lasers? Finally, the cyberpunk future we’ve been waiting for.

Of course, you probably won’t be replacing your trusty mechanical keyboard with light beams just yet, but the fact that this tech exists at all is pretty great, and an exciting taste of what might be coming.

If you’re looking for a keyboard that will channel your inner Diablo, you’ve found it. It’s the sort of keyboard a gargoyle would use on the side of an ancient castle, that a General of Chaos would use to command her Legion of Doom.

I’m unclear on why the backlight is blue instead of red, but there’s no question that if you’re setting up a gaming build in your new underground lair, this eccentric keyboard from Sunsky is a great place to start.

I’m so glad there’s a board out there for everyone, even aspiring supervillains. 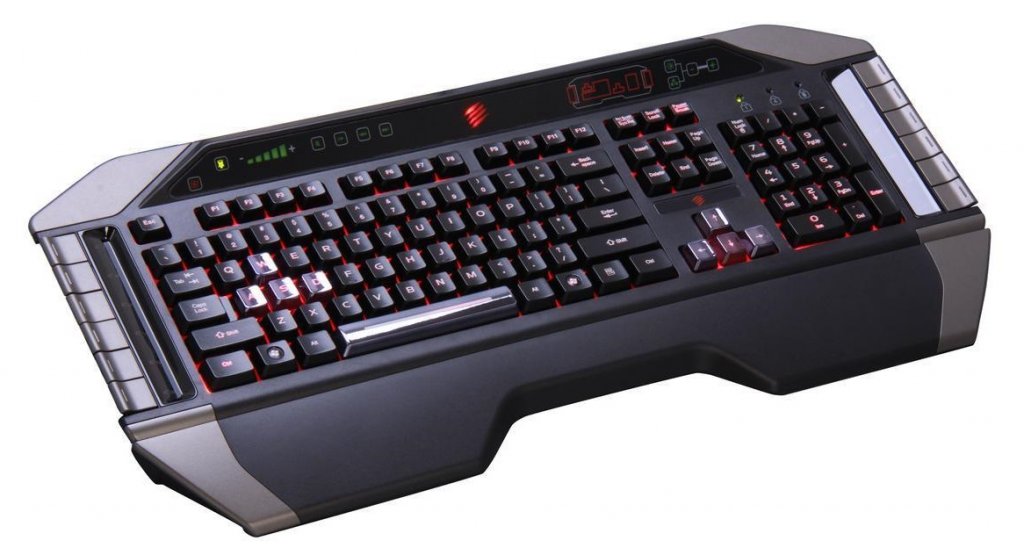 Ah, Mad Catz. The well-known purveyor of exotic peripherals has been at it for years now, and they’ve done it again with the creatively titled MCB43107N0B2 gaming keyboard.

This robot friendly deck went for an out of this world starship aesthetic. For those of us who’ve always wanted to pilot the NCC-1701, this is a great fit. As you’d expect from looking at the copious decorative flair, this keyboard is quite feature rich. It has macro keys aplenty, excuse me, “Cyborg Keys,” a USB passthrough, and plenty of lighting options as well.

It may be large, and it may not be the most understated keyboard around, but the MCB43107N0B2 isn’t afraid to be itself, and that’s admirable. Maybe we can all learn something about confidence from Mad Catz. 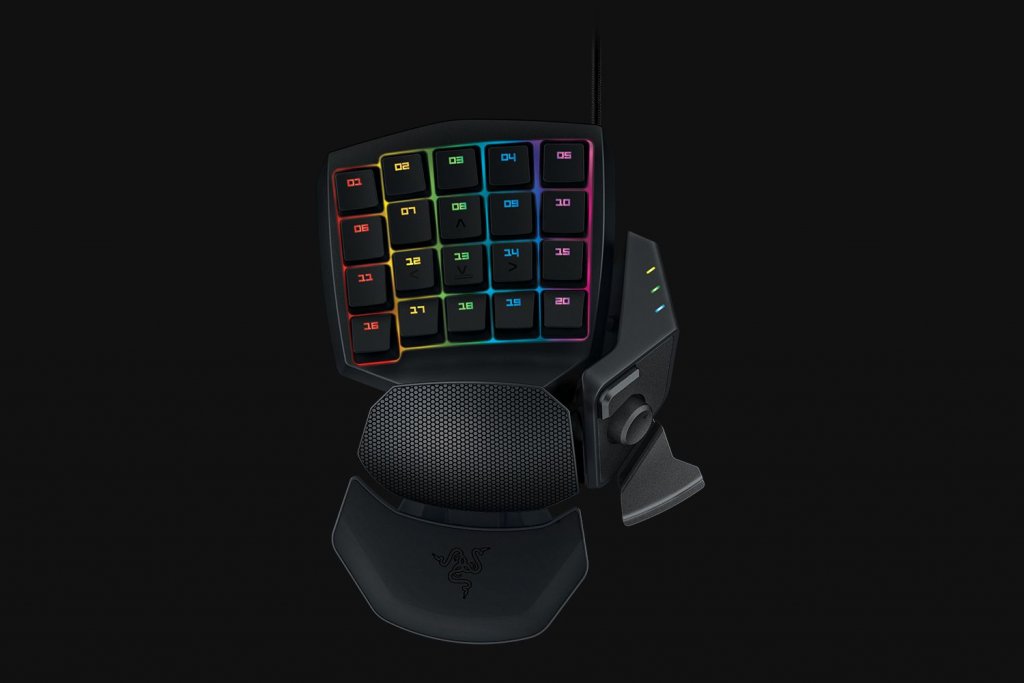 Razer makes some of the best gaming keyboards around, like the BlackWidow Elite, but the Orbweaver is an entirely different arachnid.

It may be a little misleading to include the Orbweaver with these other full keyboards, as it’s really more of a secondary accessory, but the inclusion of 20 fully programmable mechanical keys, full lighting features controlled by Razer’s versatile Synapse software, and a ton of other features make it a pretty remarkable addition to any gaming setup.

For those of you who feel that a full keyboard isn’t enough, the Razer Orbweaver is exactly what you’re looking for. Think of it as a Power Glove from the future that actually works. It’s an ideal companion for MMOs, MOBAs, or any games that require lots of button customization.

The Razer Orbweaver is definitely weird, but it’s the kind of weird that’s useful, and that’s what we’re all about around here. 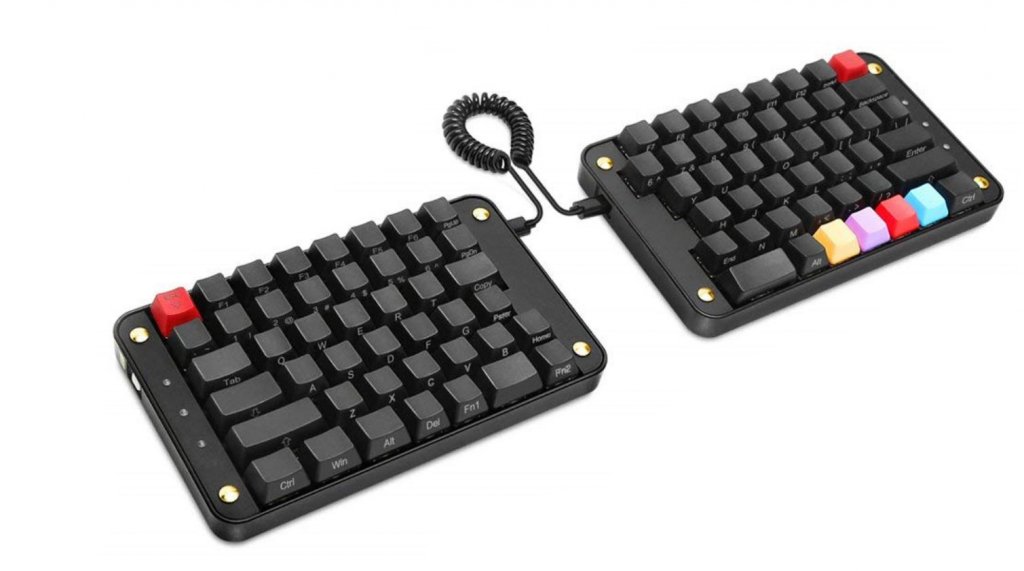 Last, but certainly not least, is this delightful little piece of hardware from Koolerton. This split mechanical deck is a great example of unconventional keyboard design; it looks awesome, it’s highly functional, and the Cherry switches are a joy to type with. All 89 keys are programmable, and there are eight macro keys for those of you who enjoy customization.

Like the Ducky, the keycaps have the letters and number printed facing forward instead of up, but if that’s not to your liking, no problem. Because these are Cherry Switches, you can easily swap out the keycaps with others, and customize this unconventional deck even further.

Koolertron has managed to hit exactly what we’re looking for when we think of weird keyboards: high build quality, excellent performance, and an unabashedly unique look that sets it apart from the crowd.

So here’s to all you unconventional keyboards, unafraid to be yourself in a sea of black and white keycaps. May you continue to push the boundaries of what a keyboard can be, and never be constrained by what has come before.